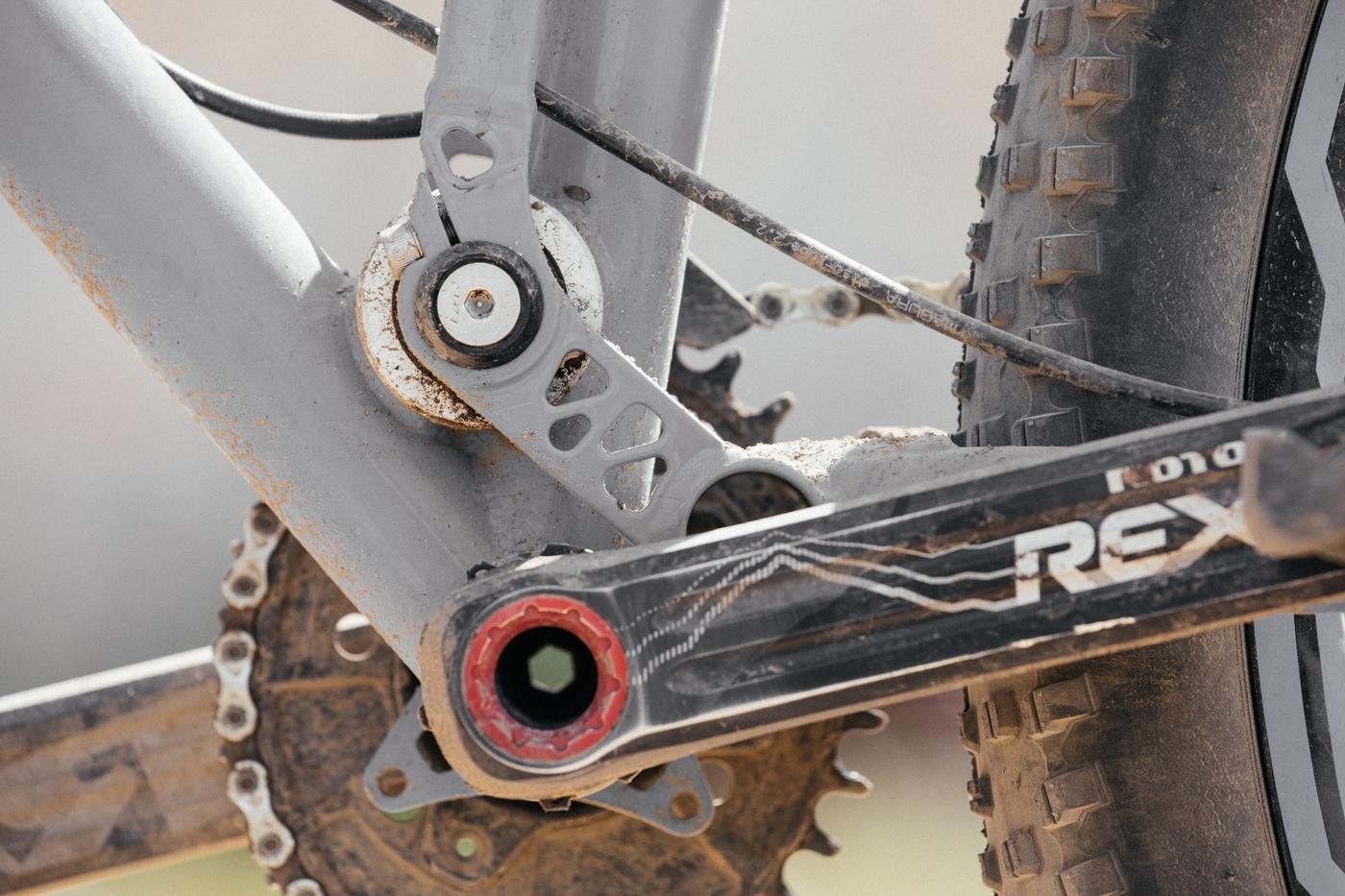 Prologue: Why Steel and Why Full Suspension?

When the Starling arrived, I must admit, I just came off a longterm review of the Santa Cruz 5010 and hadn’t ridden my hardtail in a while. I had grown calloused to the idea of going back to a steel bike for a review. Scratch that, a full suspension steel bike. While I love what the UK builders are doing with steel, I couldn’t imagine that the Murmur would be better or even equal to the 5010, or other modern carbon bikes. Boy, was I wrong!

Steel is a material that offers a ride quality like nothing else when done right. It can be snappy without being stiff, it can plane, it can flex, and it won’t chatter your teeth across brake bumps. Add in a single pivot design and suddenly, you’ve got something amazing.

You can build with steel in-house and Starling does! But they also know that building in house can be expensive and the “made in the UK” badge isn’t important to everyone, so they offer a Factory frame too, which is made in Taiwan, using the same tubing spec – Reynolds 853 – and construction.

I reviewed the Starling Factory 29er. The Murmur may look like a throwback to something you’d find in the early 2000’s, yet it is a very modern geometry, built with a modern parts kit, and meant to take on modern trails. In short, this might look like a throwback, but the Murmur is a modern mountain bike, just made from steel. With a seat tube angle of 77º, 140mm front and rear travel, clearance for either a 29er 2.5″ or 27.5 2.8″ tire, and a head angle of 65º, the Murmur is built around the same modern numbers as its carbon competitors.

It comes in three sizes, and Starling offers custom geometry, built in-house if you’d like something tweaked. Frame, frameset, or full kits are available directly from Starling. Choose no shock or a rear shock from Rock Shox, DVO or Fox. Then, choose frame only or a build kit from Burgtec, Shimano, SRAM, Hope, Middleburn, and Maxxis. This review bike came with Shimano, Burgtec, Rotor, Magura, RockShox, and Mavic. Nothing is particularly lightweight or weight-conscious, and the bike still came in at 30lbs on the nose for a size large. With XX1 and carbon parts, I’m sure you could drop it down below that. Not bad for a steel bike! All with a selection of stock colors and the ability to get a custom color, meant to make your bike as personal as possible. 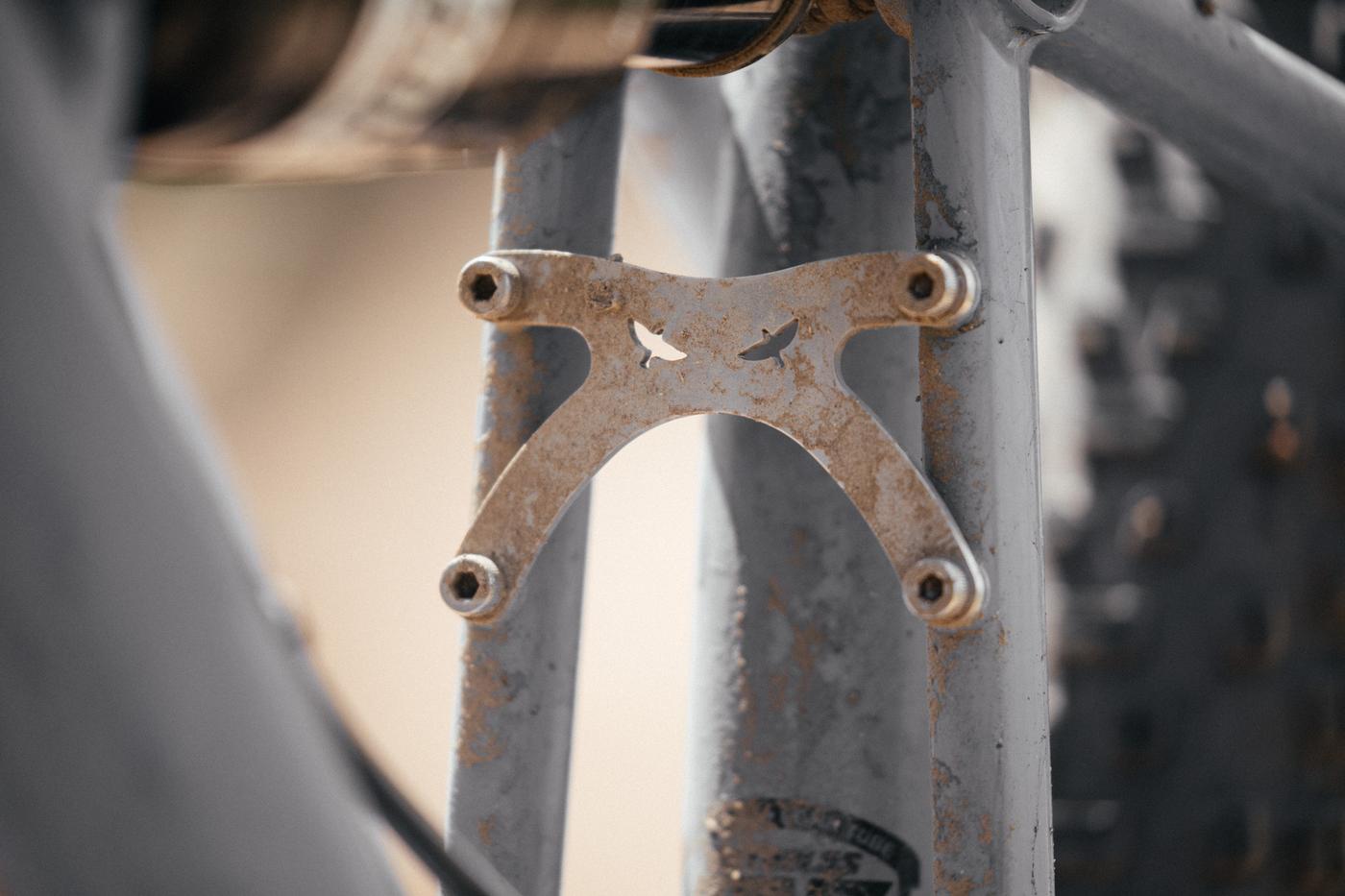 With a single pivot design, there aren’t that many moving parts on the Murmur. This makes maintenance easy and keeps it simple, stupid. Yet that doesn’t mean Starling skimped on the detailing of these gussets, brackets, and bridges. Check out the mini starlings cut out on the swingarm brace! There’s also a mount for a bash guard, plenty of mud clearance, a yoke to ensure proper tire clearance, and much more. 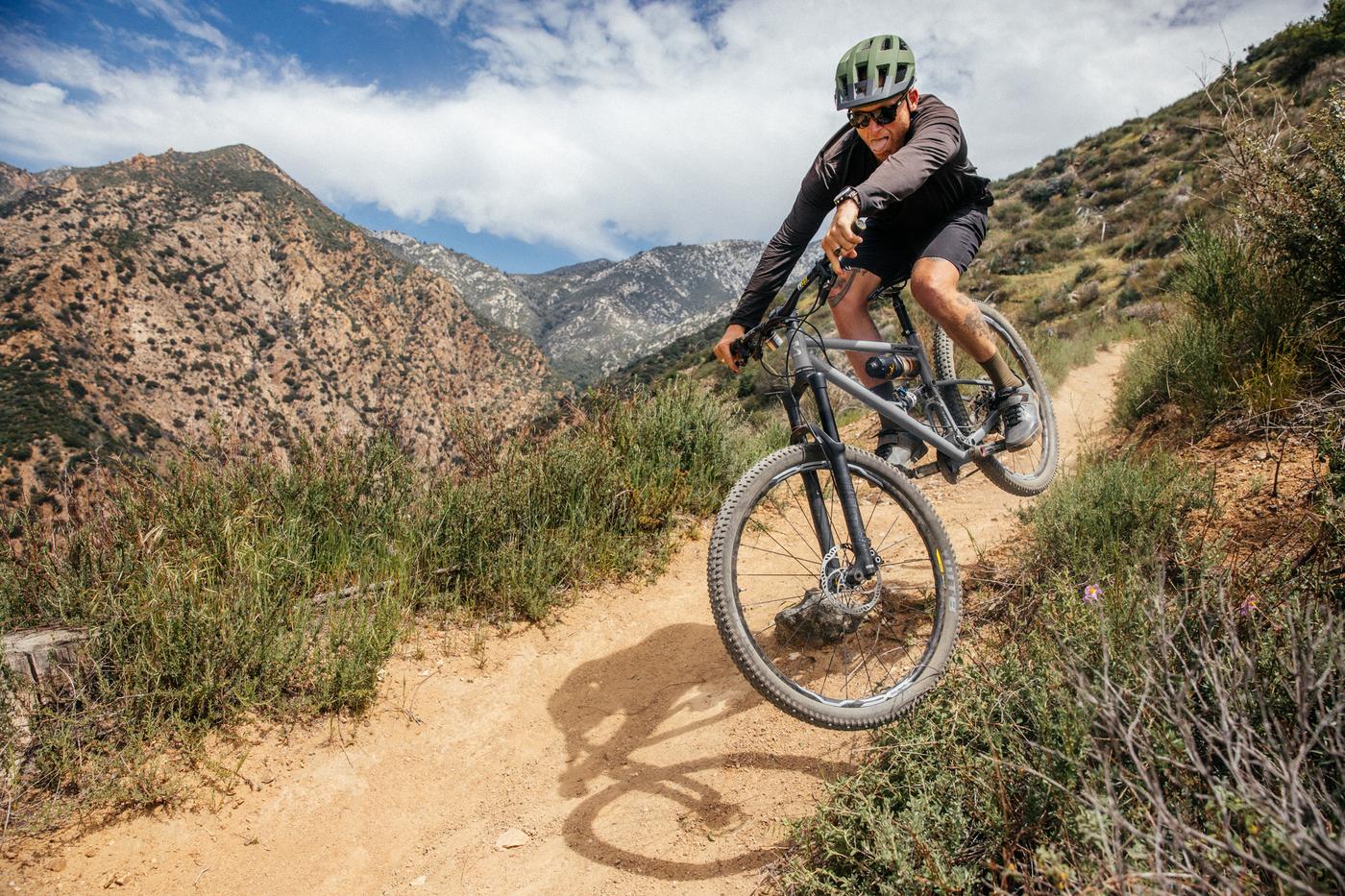 While the European starling is a social animal, traveling in massive flocks, the Starling Murmur is a personal shred sled, meant for descending steep and rocky trails. In the San Gabriel mountains, the decomposed granite is strewn about like chunder from their ever-growing faces. The trails are loose, fast, and of consequence;  many of the trails are bench cut into the canyons. The corners are tight and abrupt, making cornering at speed a challenge, so you need a bike that you can wield, not one that wields you.

Before we get into the going down, let’s discuss the going up. With a 77º seat tube angle, climbing tight and narrow switchbacks is easy on the Murmur. Locking out the shocks, it almost feels like climbing on a hardtail. Aside from a few clicks from the linkage due to the bike making rounds to various media outlets for review, some tightening down to torque spec and we were rolling, silently, pleasantly, and efficiently again. Riding in Los Angeles means you’re climbing for hours, not minutes, so having a bike that can navigate the ups, as well as the downs, is of the utmost importance. It doesn’t matter how well a bike descends, if it sucks to climb on, I won’t ride it.

Luckily, the Murmur is a vehicle for ascension and boy, does it descend! 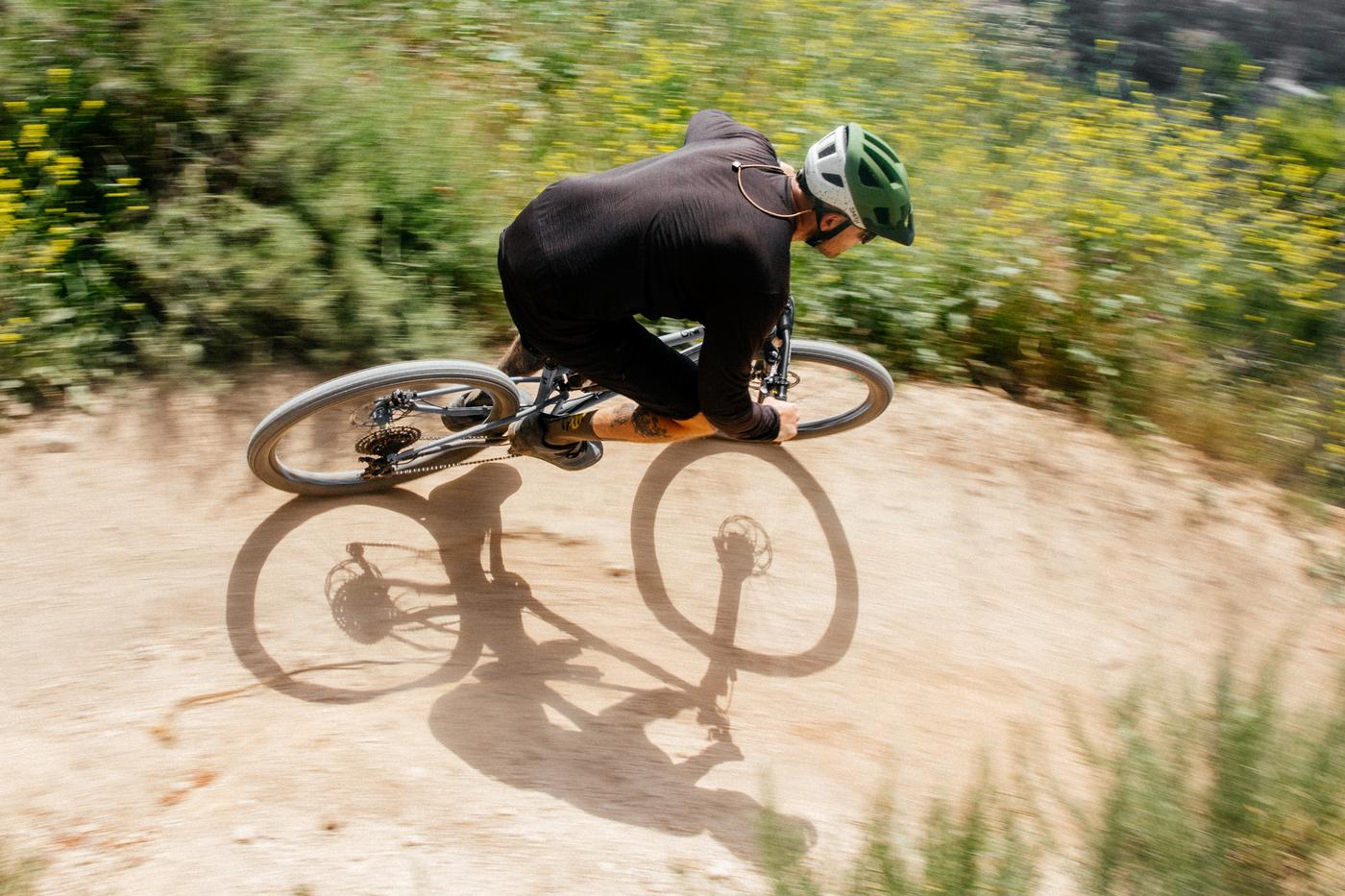 Being an ex-boardsporter – surfing and skateboarding – I couldn’t help but compare the Murmur to a board with pop. It reminded me of what it felt like to get a new surfboard, with thin rails and a great shape, that just wanted to snap around the face of a wave, while staying firmly planted beneath me. Or a skateboard that could pop over coping and carve the streets at speed with confidence. The Murmur loved flying into berms and over rock gardens, exiting with more speed than it entered. It leaped into the air attempting to emulate its avian brethren. Never once did I second guess its abilities. Big hits, big jumps – or at least as big as the pilot would allow – and big lines, were where the Murmur came alive. The 29er wheels were also a welcomed change to the onslaught of 27.5 wheeled bikes I own and have reviewed in recent months.

I have never ridden a full suspension bike that was this much fun. Period.

So why was the bike so exhilarating to ride? My theory is the tubing diameter allowed for a bit of flex and pop where it was needed. The Reynolds 853 tubing Starling uses isn’t exactly crazy oversized. It wasn’t stiff. It snapped and scraped the top layer of sand and rock of the trail just by moving your center of gravity. The bike was like velcro when it had to be and like a jetpack when the opportunity presented itself. With the nimble feel of 853 steel, akin to a hardtail, but with a single pivot suspension design, the Murmur is the best of both worlds.

All this praise, surely there had to be a few negatives? Honestly, the only thing that stuck out to me was the single bottle cage, which is uniquely placed, but it would be great to figure out how to store two bottles on the bike. I don’t always want to ride with a pack and this is big bottle country out here. The price might be off-putting to some, especially with the British Pound to United States Dollar conversion. The wait time can also be lengthy for a custom or made in the UK frame, yet Starling seems to have some Factory frames in stock now. I know all this because I liked the Murmur so much, I’m in talks with Starling about getting one for myself later this summer. That’s how much I love this bike! If you’d like your own Murmur, read all about them at Starling Cycles and don’t hesitate to reach out to them, or ask some questions below.