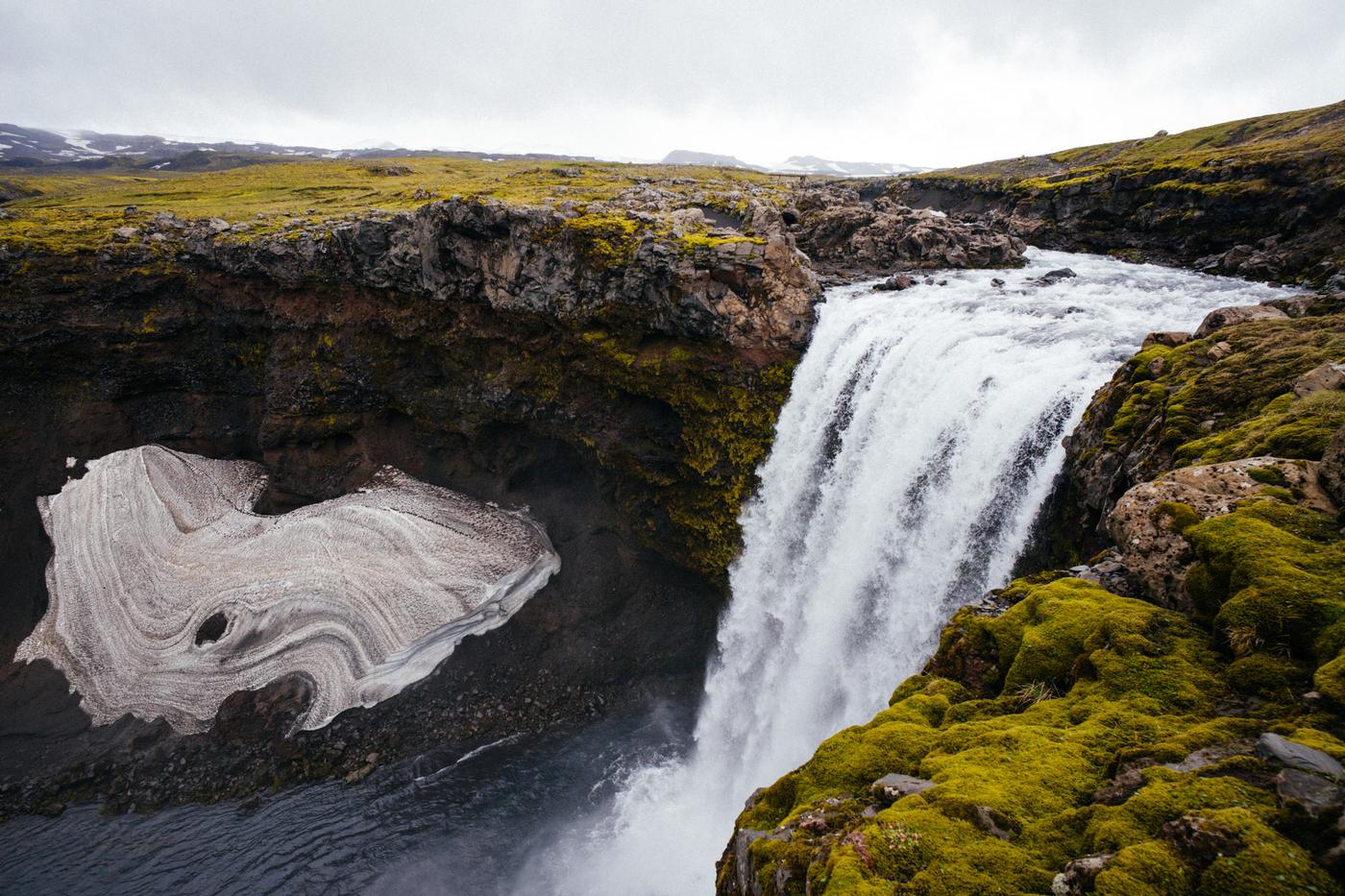 All I knew about Iceland’s backcountry was the Laugavegur trail. This was mostly due to Bike Magazine’s article on riding it years back. Oh, and I knew about the Greenland shark, Aquavit, puffins, and hot springs. You could say, my knowledge was very limited and I needed a firm education on what we were about to take on. After a few days of planning, we quickly discovered we would be venturing to Iceland a bit too early to hike the trail. Especially after their intense winter weather. Most of the trail was still under deep snow and ice, three weeks prior to our departure. Another barrier was the fact that I haven’t backpacked since I was a teenager. Sure, I’ve done plenty of touring and bikepacking, so I had lightweight gear, but I was lacking on the thing to carry it all with. Luckily, backpacks, when compared to bicycles, are fairly inexpensive and like I said, I already had all the other gear, including some waterproof hiking boots.

We had a plan. We’d fly into Iceland and head straight to the trail to begin our hike immediately, taking advantage of our jet lag and the fact that the sun never really sets this far north. We had rented a Subaru Outback from Lagoon Car Rental. It included a wifi router, and we sprung for gravel road damage since we’d be doing a lot of off-road driving. It’d take us four days to complete the Laugavegur, after which, we’d have 6 days of sightseeing, where we’d seek out the lesser-traveled roads in search of hot springs and geological sights. We had a plan and anxieties soon subsided as our departure date drew near. 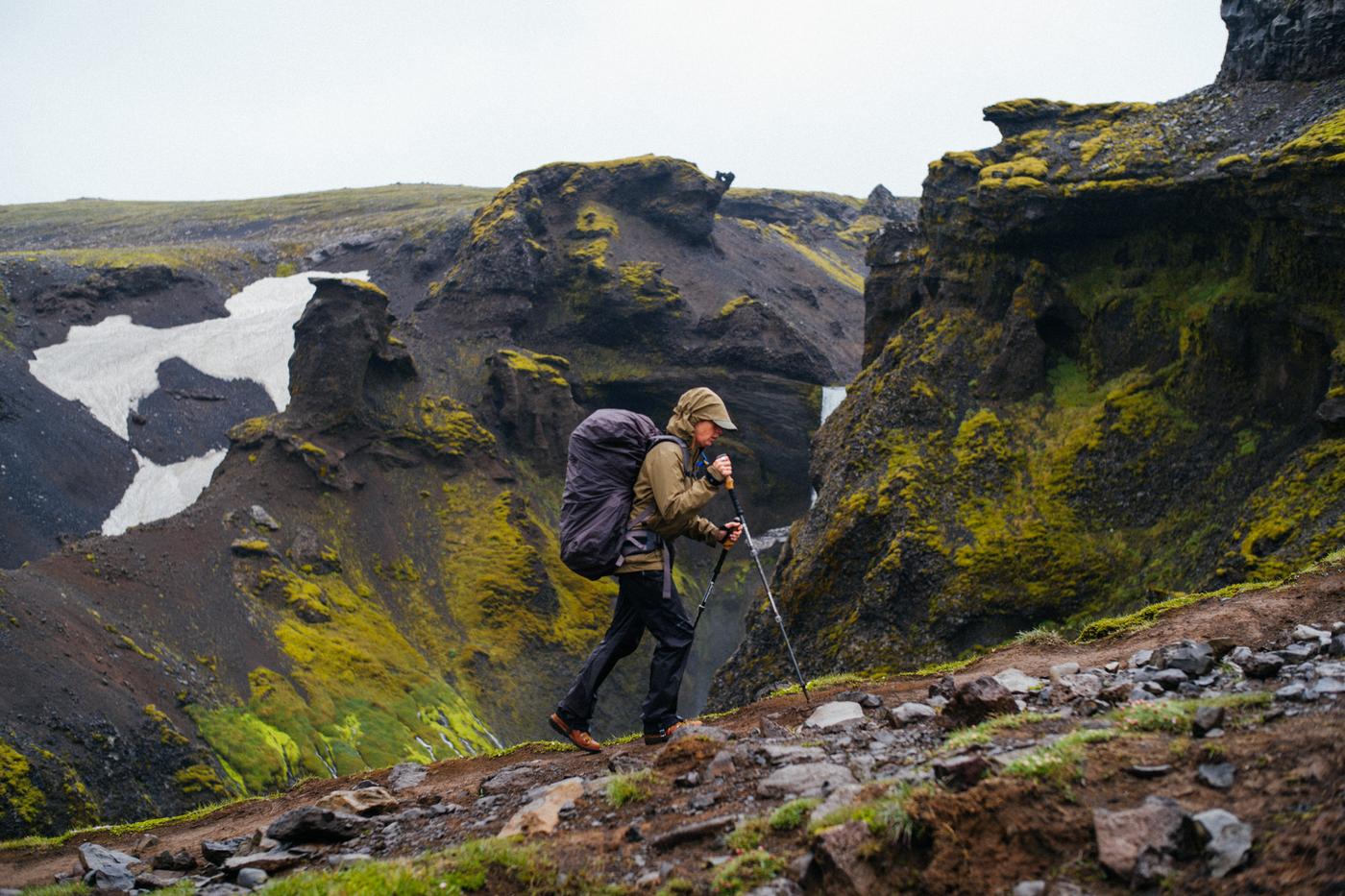 The day of our hike, we drove to the end of the Laugavegur trail in the south to begin. This is the way most locals do the trail, as you avoid the shuttle of tourists at the northern trail head and you do more climbing this way. Cari hates descending while backpacking. I just like climbing as much as possible. At the end of the day, I want to be worn out enough to pass the fuck out, even though there’s still daylight at 2am. Prior to beginning our trek, I opened the mountain weather station website to see that we had 30-40 meter/second winds on the mountain and a lot of rain and snow heading our way. With a bit of apprehension, we headed into the black skies with our rain gear ready. 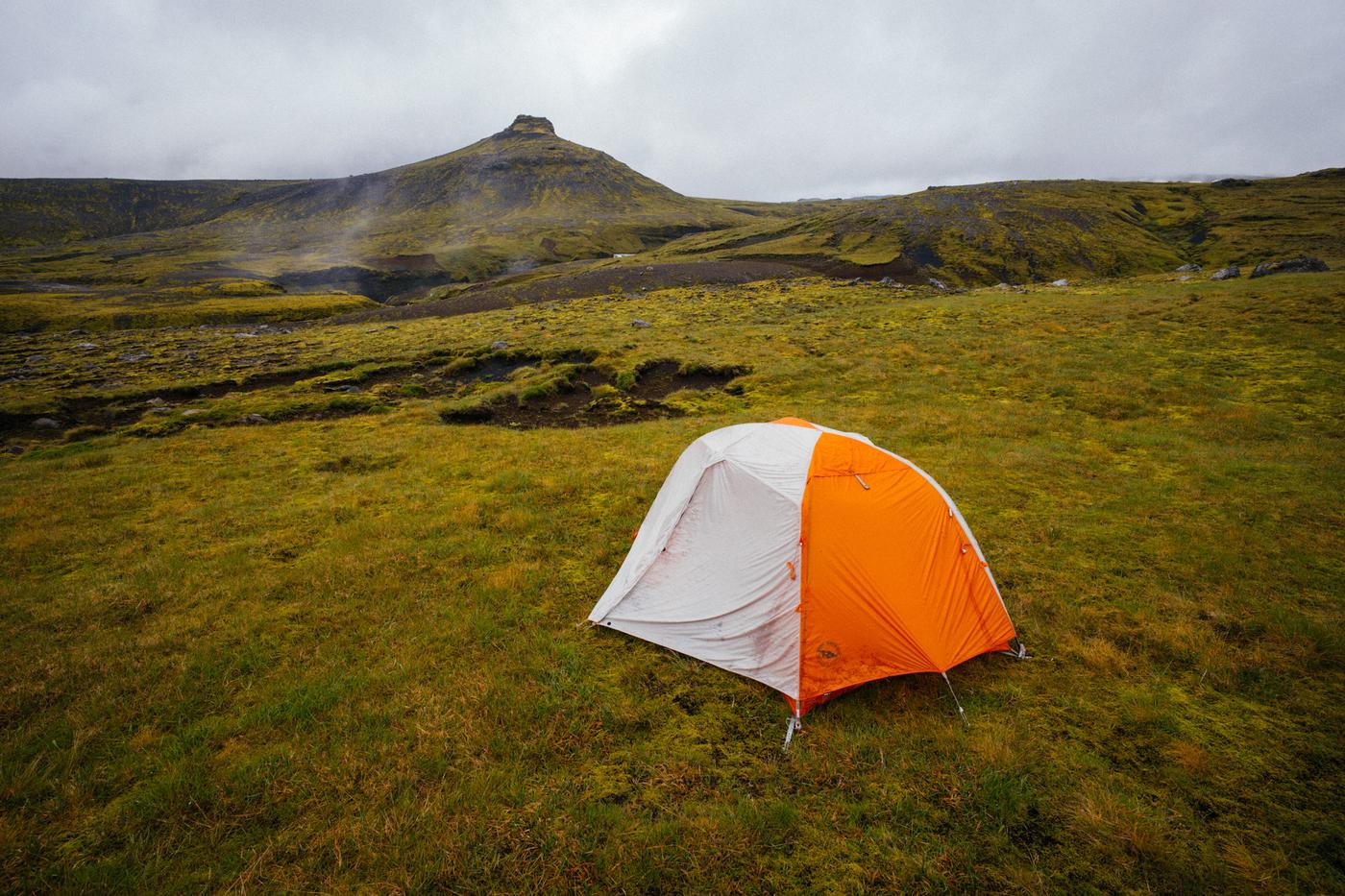 It didn’t take long for the skies to open up and the winds to pick up. We made it into the highlands before deciding we should set up our tent and wait out the storm. The bands of wind and rain passed over us for hours on end, before breaking early morning just long enough for me to take a photo of our campsite. We hadn’t planned on sleeping, and the cushy moss offered plenty of padding for our tent, so we didn’t even roll out our sleeping pads or bags. Six hours later and we were still in the tent, waiting out the storm. 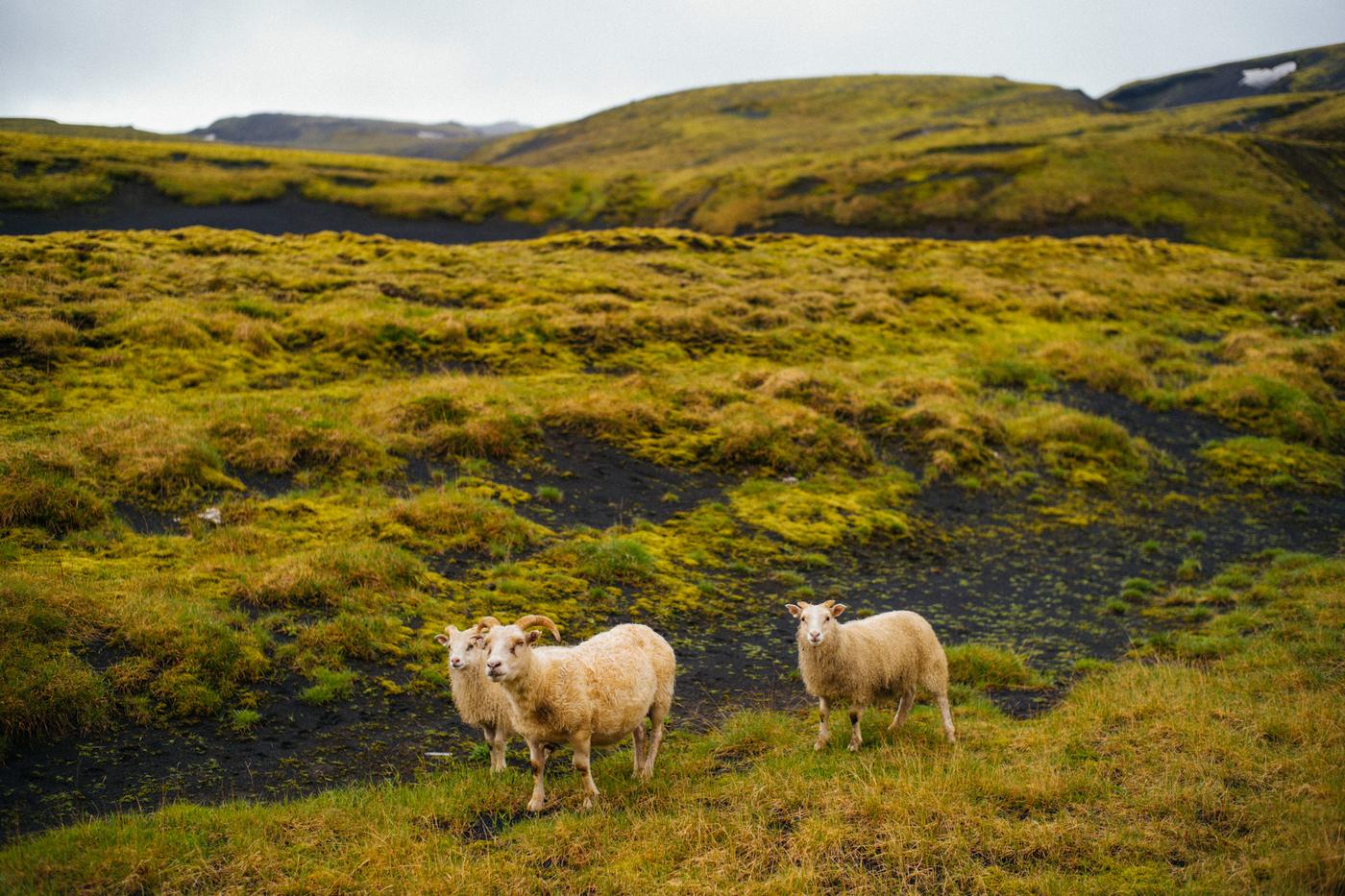 The next morning, we had a break in the weather for a few hours before ascending into a blizzard. Our faces were frozen and we could barely see the trail in spots. Knowing we’d have to cross a glacier, I was a bit worried we’d go off-trail and get lost before arriving at the mountaintop hut for lunch. As we traversed the glaciers, we spotted the weather station antenna, a lone arctic truck and a hut, awaiting our entry. Luckily, we brought money for the $5 access fee. 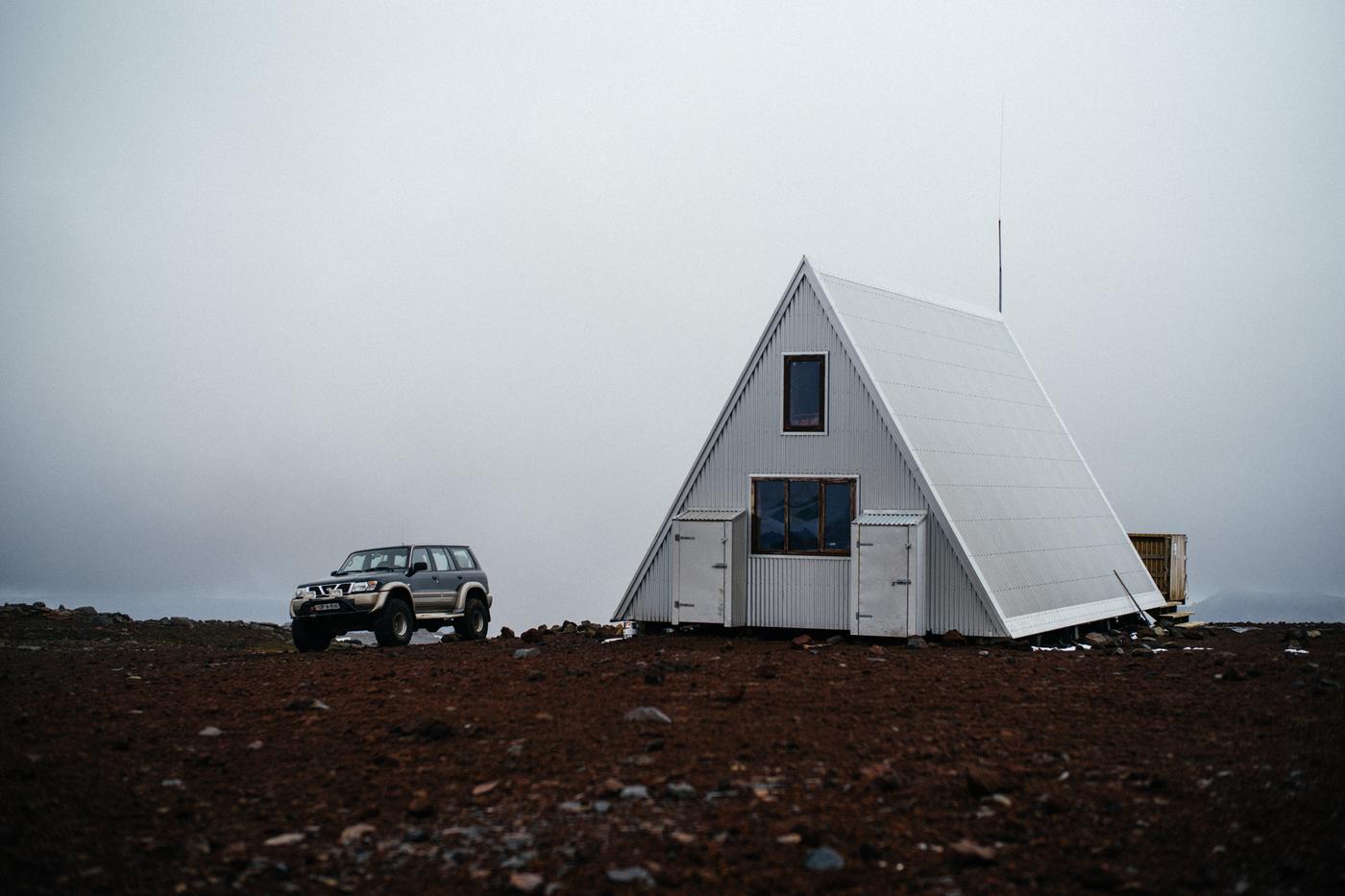 Inside, we found many weary backpackers. Some had just arrived from the north, warned us about the weather conditions. A group of American hikers had spent hours upon hours waiting out the storm before making a break for the hut. Others in the room were planning on heading back. The warden warned of the weather and advised us all to either wait it out – for two days – or turn back and try again later in the week. Cari and I were gutted. We didn’t know what to do. Erring on safety, we packed up and headed back to the start of the trail. I didn’t have a good feeling about this and Cari was concerned for the trail condition. Reluctantly defeated, we headed back down the mountain, where the weather had cleared, so we were able to enjoy the views this time. 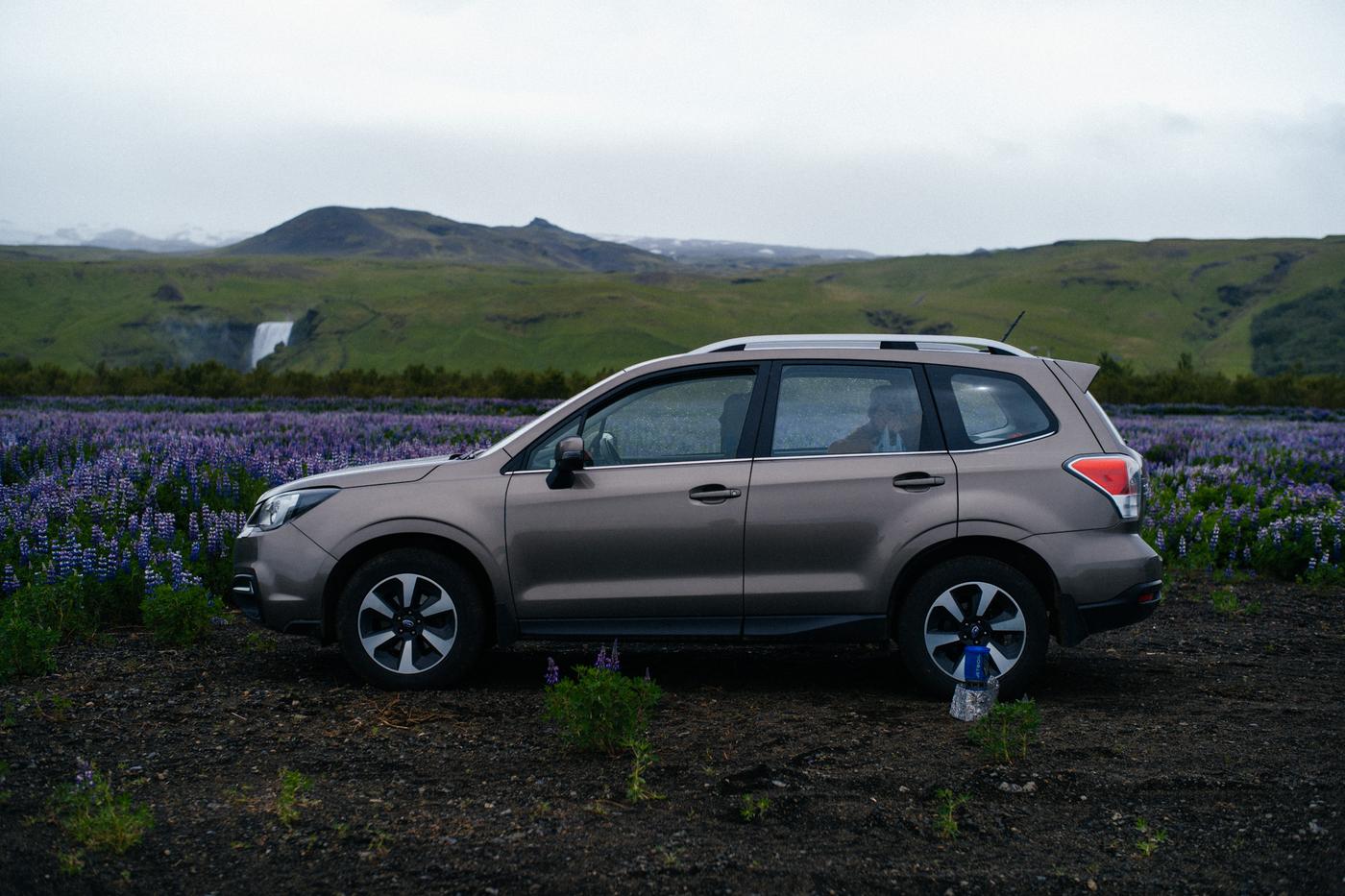 Six hours later, we arrived at Subie Sue, our Subaru and cooked dinner before finding a quiet spot to sleep for the night. Then the wind came. 70 mph gusts rocked our car, so we opted to sleep inside the trunk, which proved comfortable for Cari, but painful for my long and leggy body. Plans needed to be amended. Our defeat had changed the group dynamic. Hungry for more backpacking, we drove to the Northern trailhead, in hopes of starting over again. It looked like the weather had cleared a bit up there. 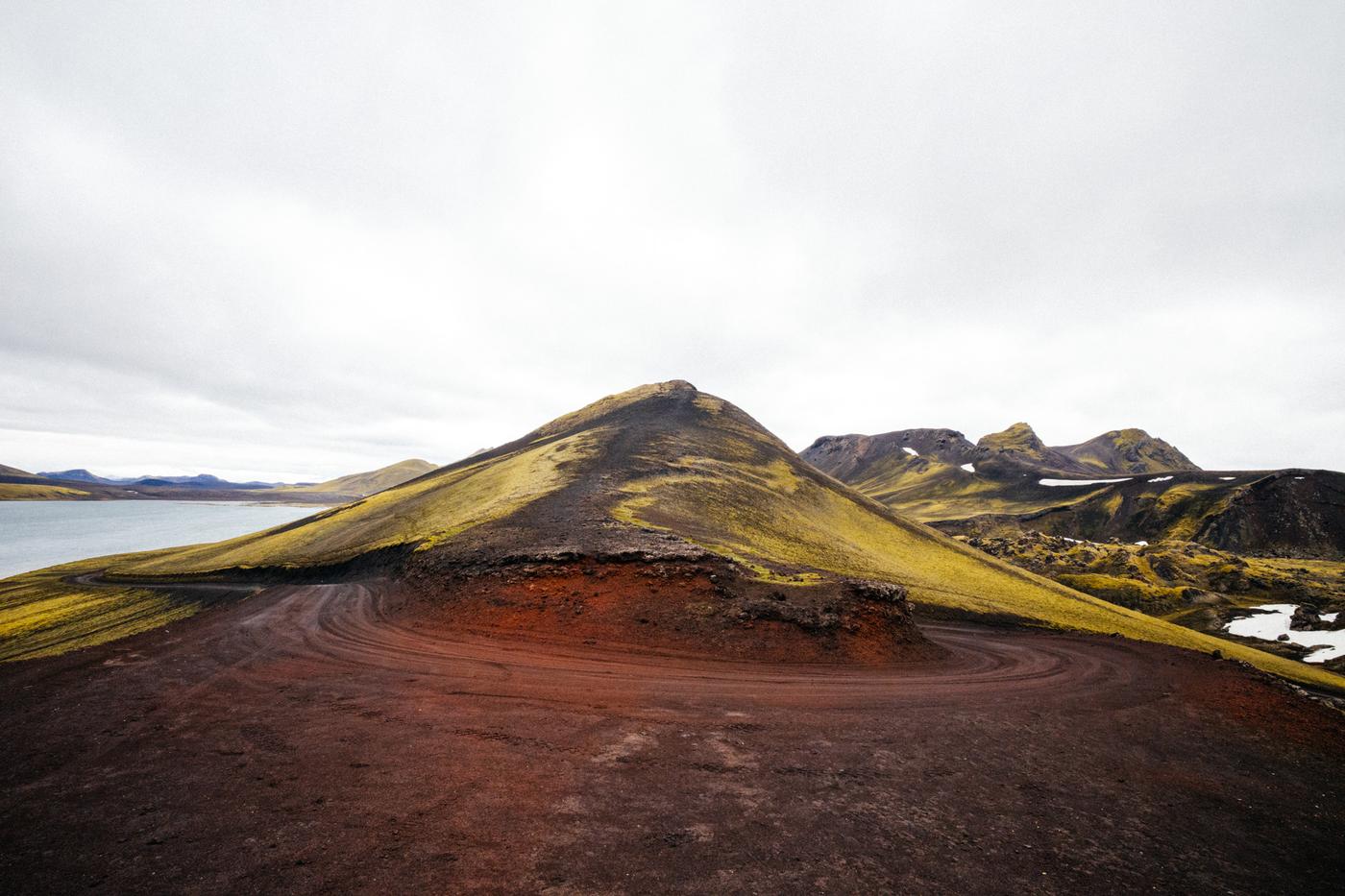 A day’s drive took us to Landmannalaugar, the beginning of the Laugavegur trail and an outpost in the middle of nowhere. This hot spring haven attracted thru and day hikers alike, with all the fluoro hiking gear you could ask for, littering the mountains. It was like an Icelandic Disneyland and we weren’t feeling it. Pushing through the crowds, we sought out a warden, who told us she wouldn’t allow hikers to leave that day. The weather was too dangerous. After a hot spring soak, we were told the same by anxious hikers who were held back. It seems our trek wouldn’t happen. At this point, they were advising people that it would take 5+ days to do the trail since the recent snowfall made for slow moving. Embracing change, we camped out down the road and returned to Landmannalaugar the next day to take on a few day hikes. While it was no backpacking excursion, it proved to be quite the remarkable experience, lending many photographic moments and plenty of head-scratching queries about the geologic formations’ peculiarities. 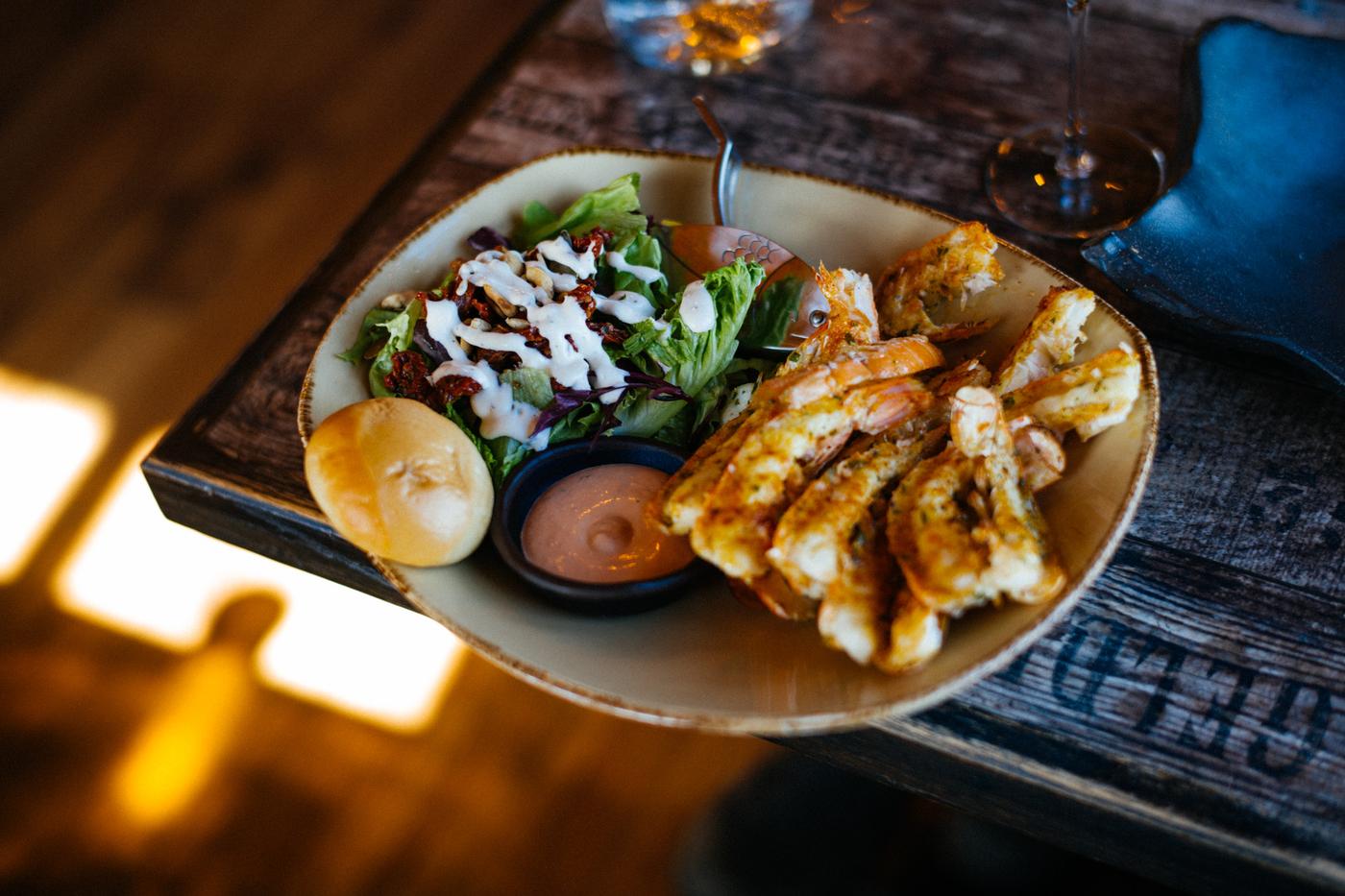 Sated, for now, we cut a path through various F-Roads, or dirt roads, including some challenging – for a Subaru – technical features. Rock gardens and river crossings pushed our vehicles limits while kept us engaged with our journey. We’d link up with the Ring Road eventually, to see a few of the sights we’d read about – mostly geologic formations – and to partake in the local cuisine of fish stew and lobster tail. 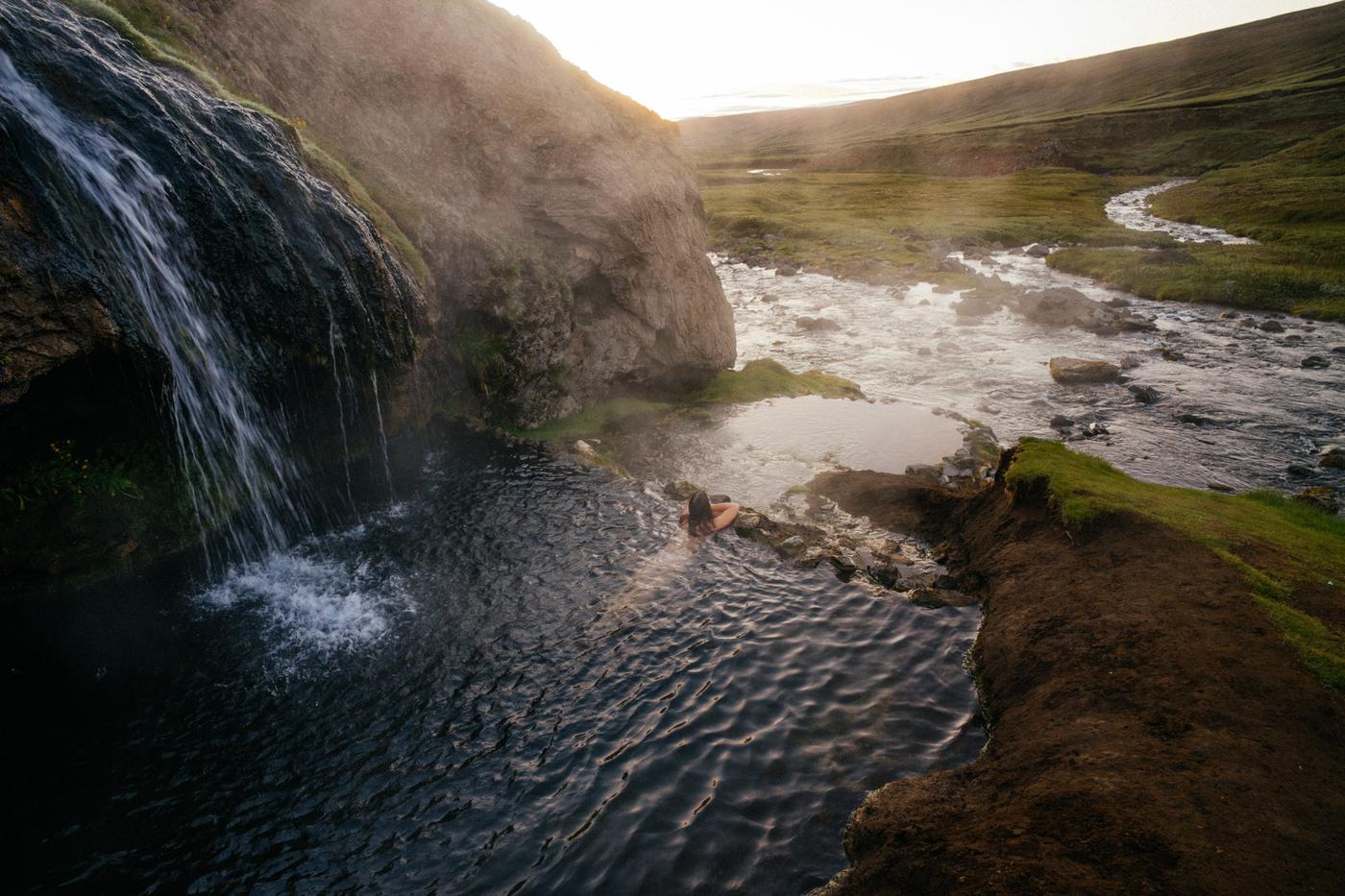 The days passed slowly. We’d sleep in late and stay up later, finding ourselves reaching empty hot springs at 2am and plenty of gorgeous sunsets, met closely by sunrises. For food, we relied on grocery shopping and a bounty of Trader Joes snacks we smuggled in with us. This way we were autonomous, not having to rely on restaurants or gas stations for our meals. In time, we had spent eight days sleeping both in a tent or the car and my back was wrecked. We’d seen everything on our list and driven a total of 2,500 km thus far. I was over driving and wanted to spend some time in Reykjavik. 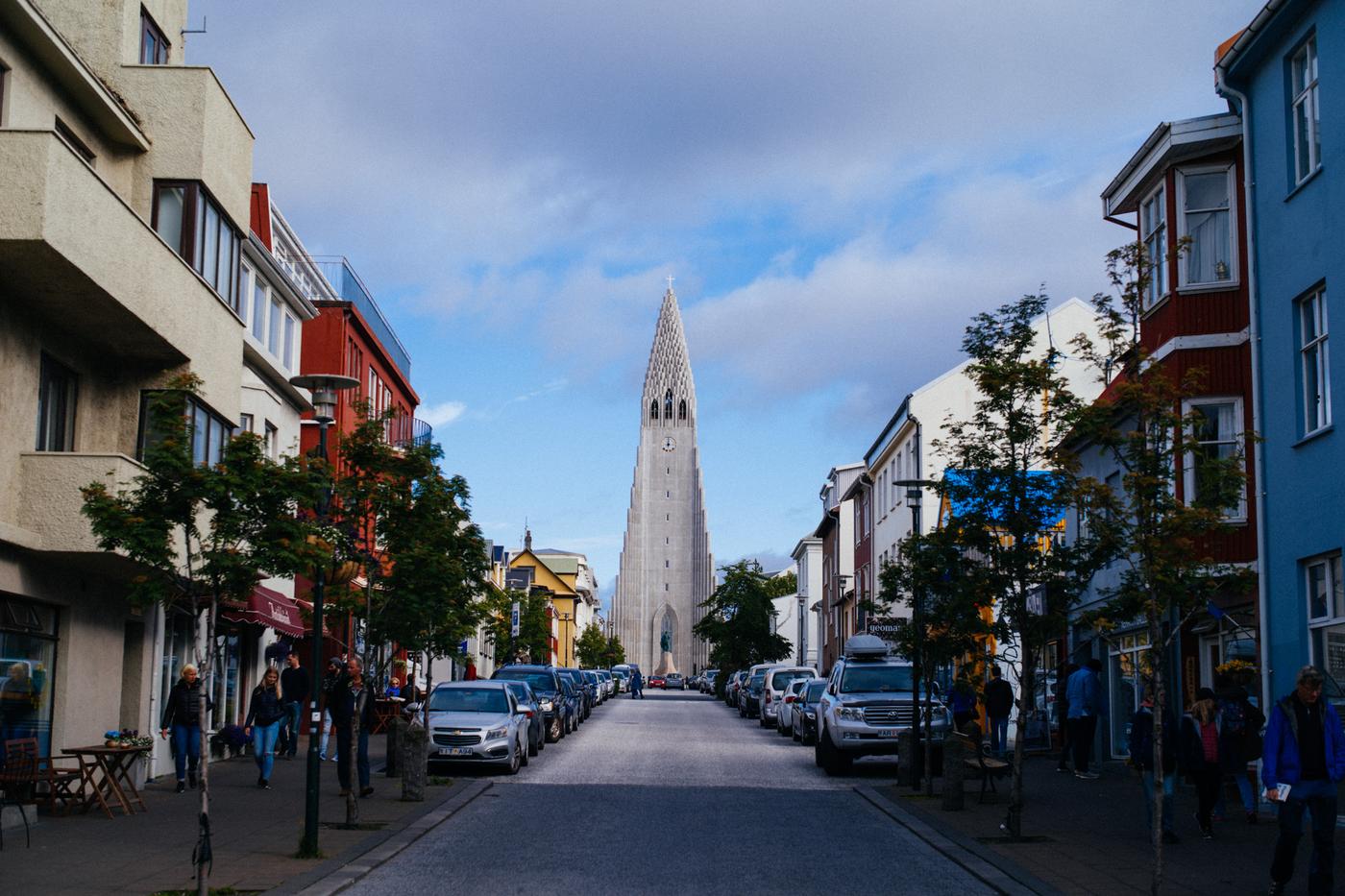 Plus, we still had some money in our budget left over, even though I was worried it wouldn’t last. Reykjavik is notoriously expensive. Finding a cheap hotel was easy, even though we were on a busy party street. We relied on happy hours for food and drinks, making our own breakfast when possible and spent two days exploring the city’s streets. Admittingly, I wasn’t impressed with Reykjavik as a city. It was too accommodating to tourists, leaving very little authentic “locals” moments. Every other store was a gift shop and the locals, that weren’t working in the tourist industry or hospitality, seemed very much “over” the presence of tourists. It was a sobering way to end our journey but a meaningful insight into how many people experience Iceland. In the end, we fought the weather and lose, but our Raidō in Iceland was a success. We got off the beaten path, planned wisely and made a point to only visit sights we truly were intrigued by, rather than following a guide book or a website’s to-do list. Coincidentally, that seems to be the modus operandi for Cari and my road trips: seek out the interesting roads and geologic formations, while budgeting enough time to truly absorb the environment. Next time, I’d love to bikepack the Laugavegur trail and take on some of the highland’s dirt roads. Iceland has left a mark on my soul and I have to say, this was one of the most photogenic trips I’ve ever taken. Have you been to Iceland? Share your stories in the comments!