Garibaldi Classic- The Nch’kay House of Pleasure and Pain-7

We were one day into a three-day trip dubbed the Garibaldi Classic or “The Nch’kay House of Pleasure and Pain.” Pandemics aside, on the long weekend in September, it has become a tradition to embark on some sort of ill-advised multi-day trip involving mountain landscapes, good friends, small backpacks, and quite a bit more foot travel than would be advertised in a long-weekend bike trip brochure. The goal was to leave from our front doors, bikes loaded with everything we would need for a three-day, lightweight excursion in the mountains, curling a horseshoe around Garibaldi Lake within British Columbia’s Garibaldi Provincial Park. The rocks were endless, and uniform in size as they crunched beneath my boots. It felt like I was walking on some sort of ancient bones, and in a way I was. As I looked across ridgelines, the skyline was filled with seemingly endless glaciers. Beneath my feet, was the evidence of the inevitable passage of time. Granite monoliths are slowly crushed and pulverized by glacial ice kilometers thick. Thousands of years ago, this would have been a landscape otherworldly, covered by a mini ice cap, the land below the ice a tumultuous blend of earth and volcanoes. 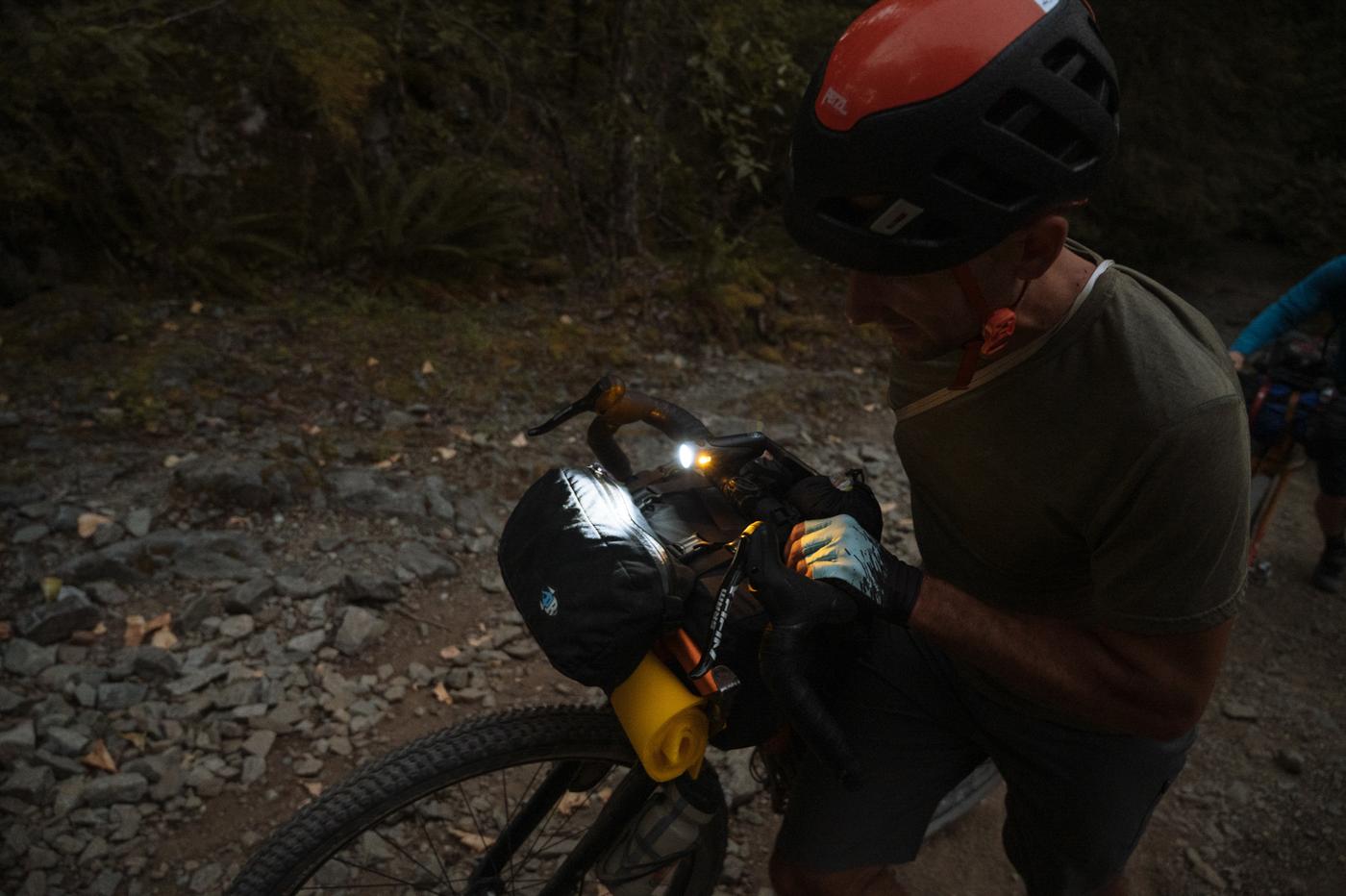 Prehistoric and apocalyptic. What I see now is more abrupt evidence of the passage of time. Less a philosophical idea than something right in your face, all the glaciers in my view shrinking and shriveling. Glacial pace no longer brings to mind a slow creep, but something else. The sun beats down, and the foam straps of my bag pull against my shoulders as I take another step up the steep crest of the ridge, catching up to my friends. As the sun swept across the vastness in front of me, a raven flew over our heads, unconcerned with the passage of time or our humble steps through this prehistoric landscape. It rose, dove, and played on the gusts of wind. A visit from an old friend, a reminder to enjoy ourselves out here. We would be traveling in what is known to most as Garibaldi Park, the park was named after some Italian patriot who never actually made the journey over to BC. The actual name given by the Squamish People to the peak to which the park is named is Nch’kay meaning “Dirty Place” or “Grimy One”. This references the muddy water of the Cheekeye River that drains off the glaciers high on the peak. The mountain is an important cultural landmark for the Squamish People, with its surrounding area being used for hunting and foraging.

In Squamish Nation history, Nch’kay was the peak to which the people tied their canoes to avoid being swept away by the Great Flood, as the waters rose at the end of the last ice event. The scale in this park is hard to comprehend. There are over 150 glaciers and 100 named peaks in the park’s 1950 square kilometres. I’ve been lucky enough to spend time there both in the depths of winter, as well as the summer, but I was looking forward to a trip on foot, connecting ribbons of ridgelines, and crossing high glaciers. 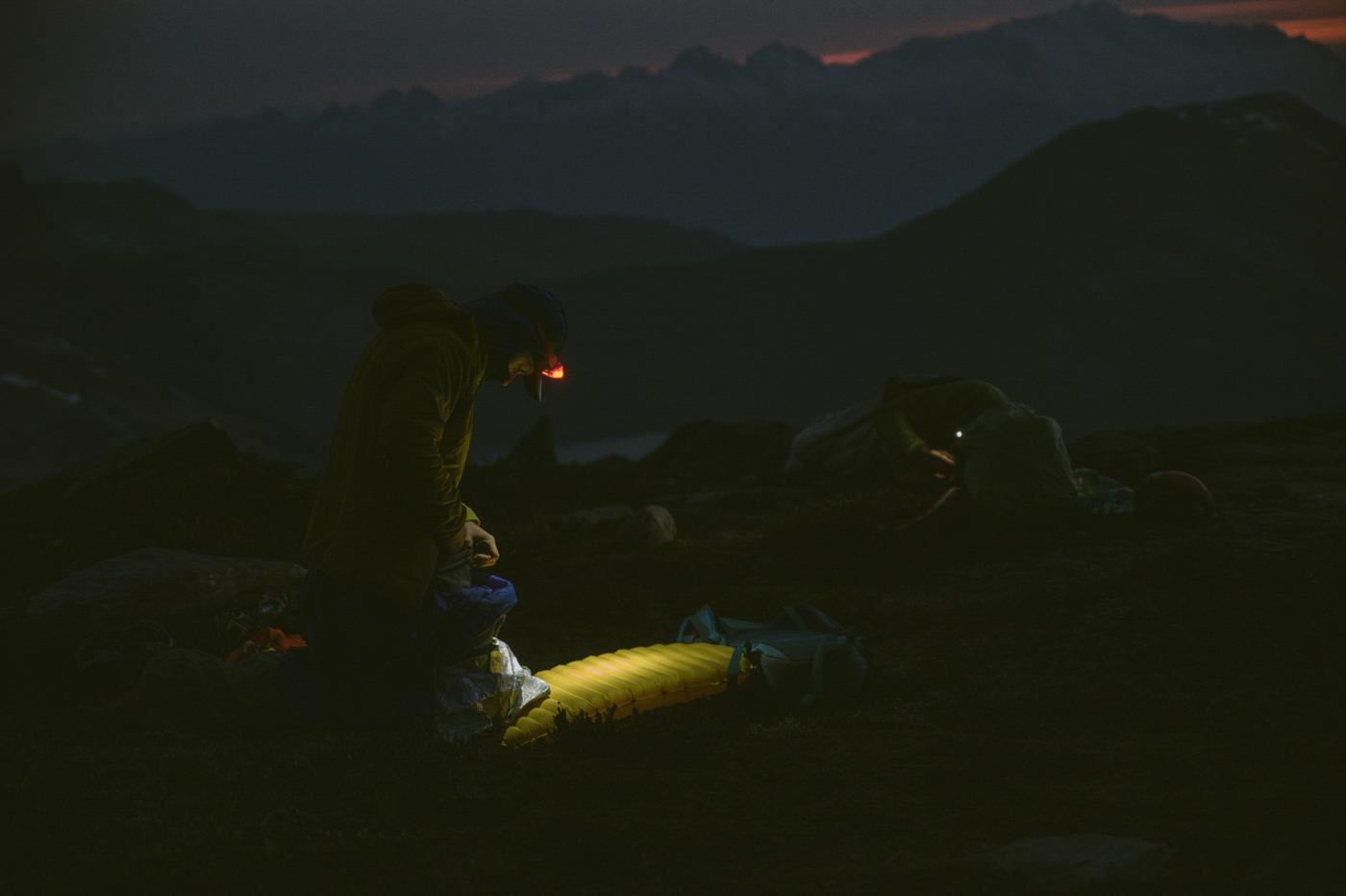 With childlike anticipation I was up and out of bed before my 4 am alarm, wrestling my well-burdened bike through apartment hallways, whose architects and engineers had no thought for bikes with wide bars, packed full of boots and ice axes. I met my friends Ross and Julian beneath the dim streetlights on the corner of the Sea to Sky highway and set off to collect Scotty, the last member of our group. As we settled into a friendly pace and acclimated to the unusually heavy weight of bikes full of hiking and climbing gear, the sun slowly crept over the high mountain ridges.

We followed the Sea to Sky Trail (look it up if you haven’t) and climbed slowly up from the river bottom, curving our way along a gravel path through canyon walls, and one small hike a bike. We rolled along the highway to the Rubble Creek trailhead, one of the main points of access for the park, relishing the last minutes of smooth, easy travel. The shift in mindsets from bikepacking to foot travel came with the emptying of bags into a stress-inducing pile of gear on the ground. Although we of course did a test packing in the days before, the size of the gear pile, versus the size of packs, brought everyone a few seconds of trepidation. It’s always surprising when you change forms of movement, how refreshed your body can feel. Our packs felt heavy, but our legs were strong, and our usual, self-deprecating, ridiculous humor was in fine form. On the well-traveled, silty trail, every footstep ejected a cloud of fine dust. Panorama ridge is a beautiful spot, and well deserving of its popularity, but we all looked forward to leaving the crowds behind and relishing in that quiet contemplation a walk in the mountains can bring. As we cut left across the landscape of talus and stone, we meandered across a very dry Helm glacier, towards Gentian pass and our first high point of the trip. As we dropped our heavy packs and dug snacks out of various nooks and crevices, a cool breeze whipped up, as we looked over at Castle Towers, the next peak we hoped to visit and continue on our way, connecting the dots, in a horseshoe around Garibaldi Lake. Ross and I had attempted to ski this peak this winter, and it was humbling to see the extent of the broken glacier, riddled with crevasses, a truly wild landscape. As we crested the top of Polemonium Ridge, we scrambled down a few technical steps and stumbled upon what can only be described as paradise in the alpine. Grass to sleep on, running water, and a view that I had no complaints about. Of course, a discussion followed as we peeled off our boots, and brewed up a coffee. Do we push on farther, or do we take some extra time to relax and rest, knowing it would mean a very early morning? I’m happy to report that the idea of walking around barefoot, taking in the atmosphere of this place, having a few coffees and nips of whiskey won out, and we settled in for a relaxing bivy. Trips don’t always lead to moments of clarity or deep thoughts or reflections. Sometimes they just happen, they can be fun, moments can be hard, you can complain, but it might not leave an impact, and that’s fine. In this instance, as the sun was setting, and I was running around with my camera, I paused as I lifted up the viewfinder to my eye. I could see my three friends, telling stories, laughing, and planning the next day. I had a moment of deep appreciation for the sometimes seemingly random set of events that led me to be able to share this experience with them. With a 3:00am start on the docket, I shimmied into my bivy sac, watching the unfathomable number of stars welcome me to sleep. The wake-up call felt abrasive, to say the least. Two, maybe three cups of coffee later, we donned our headlamps and were ready to begin the scramble up to the first summit of Castle Towers. As we moved higher, the sky began to wake, the soft glow, ethereal and quiet, we kept moving and were granted passage through the blocks of granite. After gaining the second bump which is the high point of the three distinct towers on the peak, we began a rather precarious descent onto the glacier, before heading over to Mount Carr and continuing on and off the Ribbon of rock and glacier.

What had started out as a very good weather window for this trip, was slipping away. After chatting with some friends through satellite messaging, the next day of our trip called for snow up high, and 25mm of rain at lower elevations, problematic for summiting peaks, and not having much shelter due to our light kit. Mountain weather is humbling and should be respected, so we easily shaved down our list of objectives and scurried across the Sphinx and Guard glaciers. Moving across these ancient surfaces, we aimed for the deep valley of Sentinel Bay. Picking our way slowly down talus and luscious green slopes, the group arrived at the tangle of rivers, draining off the glaciers above, and settled in for a much-needed coffee break. We were feeling the pressure to get up and out of this valley, past The Table and over Mount Price, descending down to treeline to sleep before any of the forecasted bad weather arrived. Getting across this web of creeks, required an Olympic-style pole vaulting technique using our trekking poles, and I of course went for a full-foot soaker. Regardless, we climbed out of the valley, onto one of the wildest landscapes I’ve ever seen. A flat expanse of perfectly uniform rocks, that have crumbled off The Table, a perfectly flat volcanic plug, that erupted and slammed into the ice cap that covered it during the last ice age. We moved well into the night, up an old burn on the back of Mount Price, heading down to treeline around 10 PM to set up a tarp, and finally, dig into some dinner. Even though we’d been on the for 18hrs, there was levity in the group, the jokes, the jabs coming in full force, the special sauce that holds this group of friends together on such ridiculous trips. The next day is a blur of rain, coffee, and soaking wet blueberry bushes, as we made our way back to our stashed bikes, and pedaled back onto the highway and gravel aiming for food, drinks, and coffee just in time before the last call at the local brunch spot. I was thinking of some way to metaphorically sum up this trip, but it won’t come to me. These places have an impact on me, and so do the people I share them with. I doubt the landscape remembers our footsteps passing over its spine. Our moments of elation, trepidation, and questions witnessed only by the raven floating in the breeze.