Terra Rosa Gear_ Inside the palace -39

It’s 8am and we’re out in the not-so-salubrious outer suburb of Campbellfield, a 45-minute drive north of Melbourne CBD. A bruised-up Subaru sits parked outside an industrial workshop with all its doors flung open, and the sound of Don Williams’s country classic “Tulsa Time” fills the air. With some trepidation, we draw closer. A pair of skis erupt from the passenger side window. Anoraks and half-finished sleeping bags lay strewn across the backseat, while a huge roll of fabric pierces through the car, like that motorway scene in Final Destination 2. Did we take a wrong turn somewhere off the highway?

Singing with Don as he walks down the stairs, Evan spots us loitering by his car. “Hey guys!” he shouts. “Welcome to the Terra Rosa playground! Apologies for the car, it’s not stolen. There’s been an unreal dump these last few days and I’m getting ready for some snow adventures in the high-country.” Of course we were in the right place: we were standing at the palace gates of Terra Rosa Gear. Born and raised in Williams Lake, British Columbia Terra Rosa Gear founder, Evan Howard grew up with a diet full of adventure. Flanked by two world-class alpine environments—The Rockies to the East and the Coastal Mountains to the West— Evan developed a passion for mountaineering, climbing, skiing and hiking that’d enable him to travel all over the world. It even scored him a spot on Animal Planet’s (slightly wacky) Curse of the Frozen Gold adventure-reality-legend-busting TV show, thingy. Surprisingly, Evan’s catalyst for adventure was anything but typical. “As a kid, I grew up playing the original Legend of Zelda and loved it,” he explains. “That game really instilled an early sense of adventure in me. I remember playing as Link (the main character) and then going outside to recreate the sense of freedom and exploration I experienced in the game. I wasn’t interested in the fighting, but rather [experience] the world they were creating for me to explore.”

In 2005, Evan moved to Sydney, Australia and started exploring the rugged Blue Mountains of New South Wales. With a new environment and a much warmer climate than he was used to, his gear choices began to change. “I didn’t need a tent in NSW cos’ it was so hot, so I bought a camping hammock and tried to find a tarp for it. After looking around for weeks, I couldn’t find anything in Australia that suited my needs, so I sat down with my girlfriend’s ancient Singer 201k sewing machine, and stitched my own.” One taste of the make-your-own gear (MYOG) life and Evan was hooked. Weeks later, he had made himself an entire sleep system by cannibalising old equipment, salvaging fabric from ski jackets and dumpster diving for retired gear. The result was a quilt, a tarp and a Franken-pack to haul it up the mountain with.

Inspired by the burgeoning MYOG cottage industry in the USA, he started posting his creations to gear forums online. Soon enough he generated a keen following in the USA and in Australia “At the time, there were Australian adventure brands, but nothing in the custom or cottage style,” Evan recalls “The ultra-light (UL) scene in the USA was starting to slowly creep into Australia, so I saw that as my opportunity to bring UL gear techniques to Australian hikers, climbers and mountaineers. I worked hard on improving my manufacturing skills to the highest level I could, bought a bunch of bulletproof industrial sewing machines and in 2010, incorporated and launched Terra Rosa Gear.” 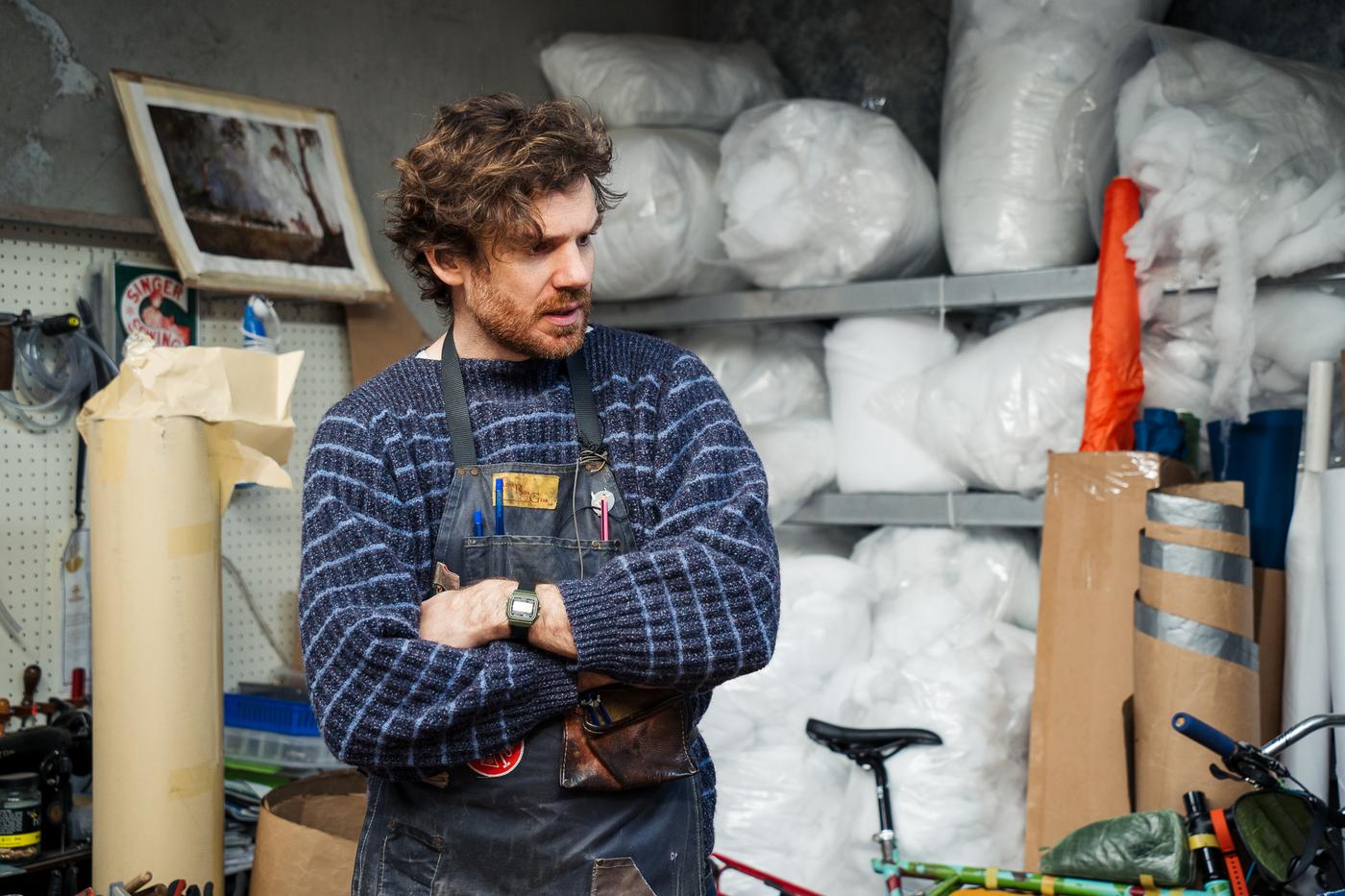 Twelve years on and Terra Rosa Gear is now one of the most highly regarded cottage makers in Australia. Now based out of Melbourne, Victoria, Evan employs three freelance machinists and specialises in fabricating premium custom and non-custom adventure gear. The technical quality and sheer variety of products the team makes is truly mind-blowing ranging from UL tarps, tents, sleeping bags and quilts, to technical clothing, backpacks and a full complement of bikepacking bags. 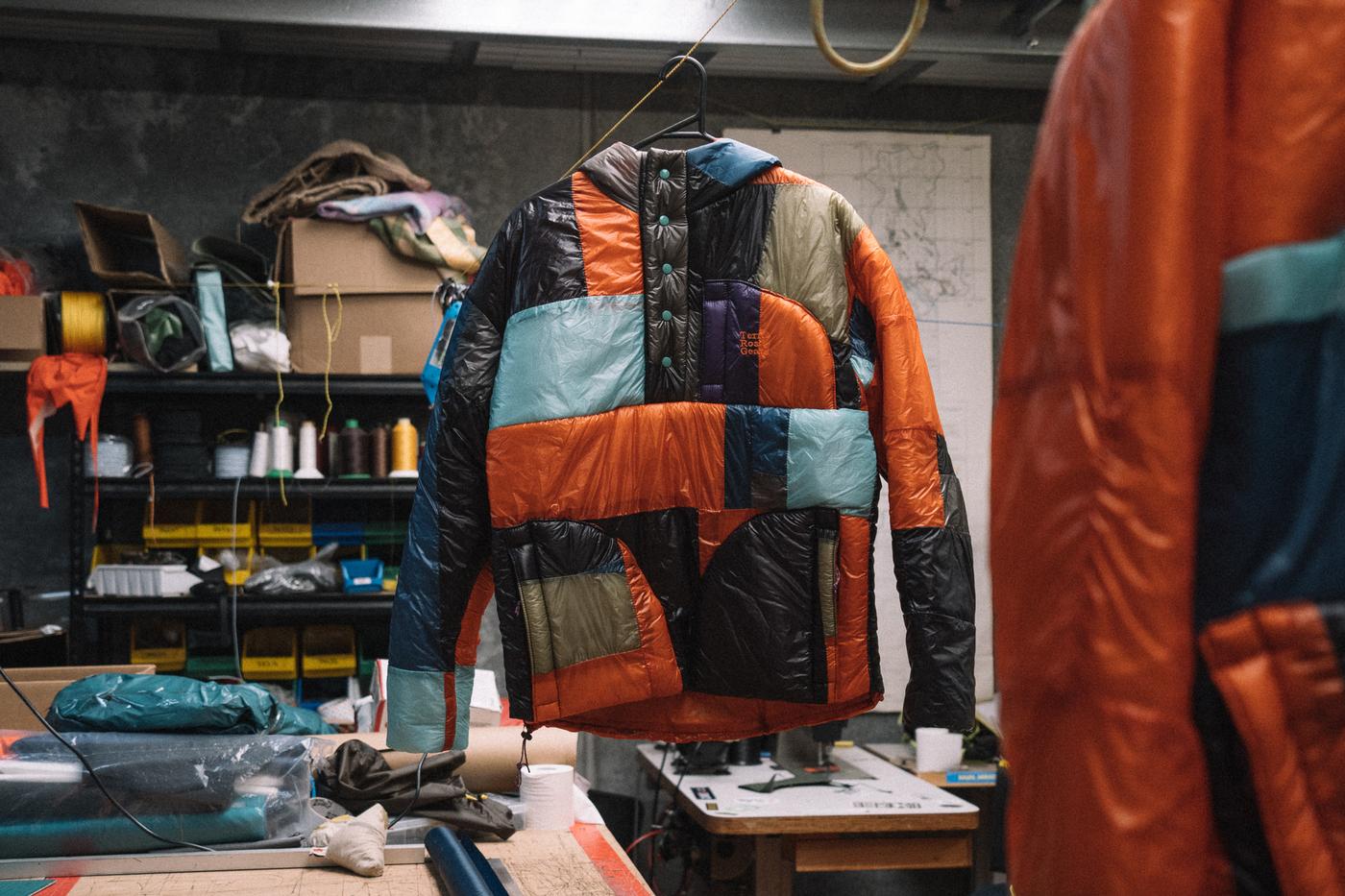 With the global explosion of interest in bikepacking, the demand for high-quality outdoor gear has dramatically increased too. In order to keep up with demand, a growing number of makers have started to move away from offering fully custom services, opting instead to adopt a more universal fit ethos. The upside to this movement is that premium gear becomes more inclusive, more affordable and, for the makers, easier to produce. Whilst the team at TRG also call on this ethos for some products, Evan is still a fierce advocate for how much custom gear can alter outdoor experiences. 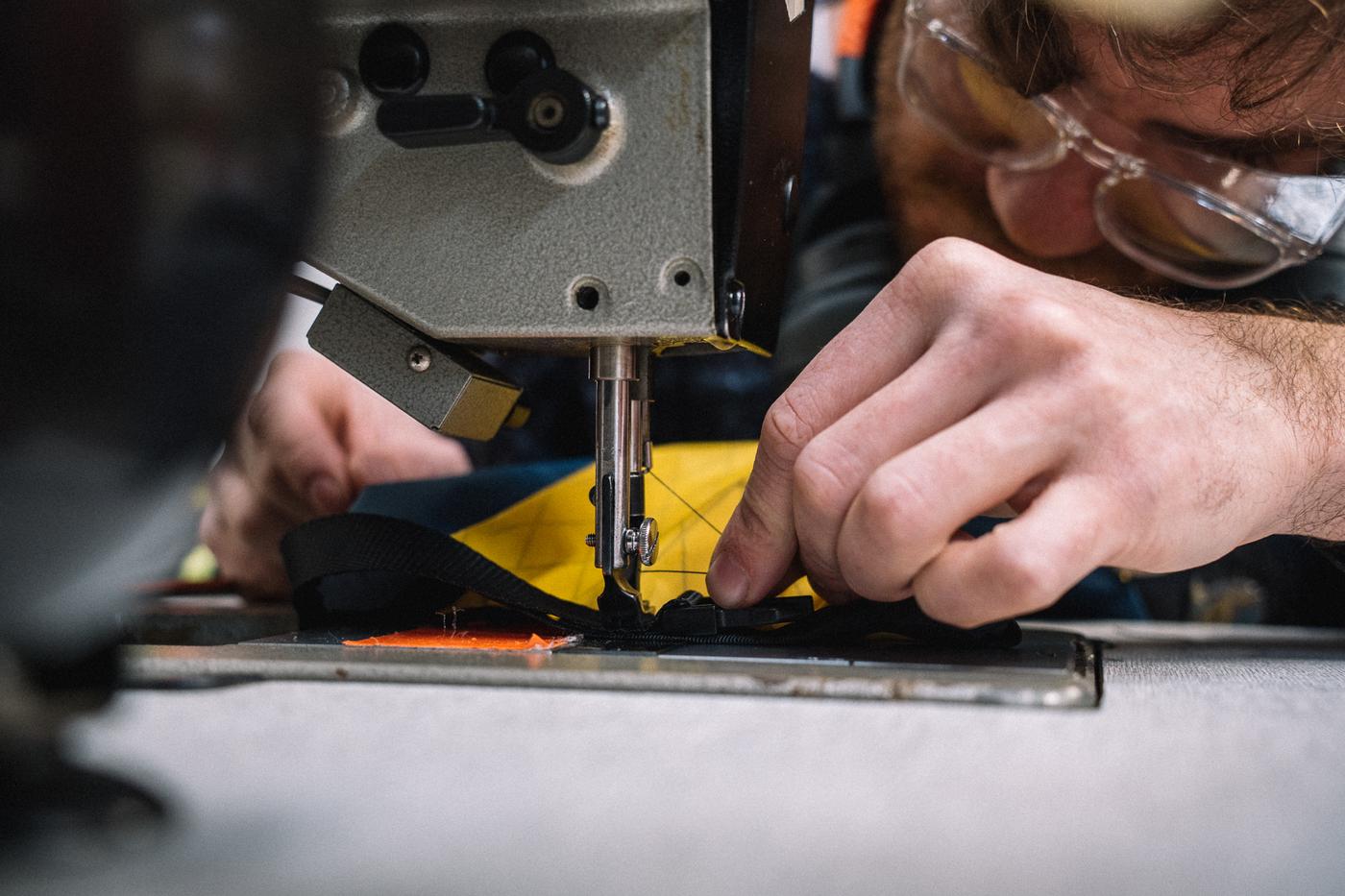 Even after twelve years in business, the excitement he shares with each customer is still as vibrant and palpable as the first day. “Just like the gear itself, my customers are all completely unique,” he explains “Some know exactly what they want down to the choice of fabric, weight and finish. Others want to be guided, taught and encouraged. Then there’s the customers that want to have a lot of creative control over their gear and its final state.”

As a maker, Evan sees his role as being in a state of constant negotiation. “Sometimes my job is to take a customer on a journey, exploring what’s possible within their boundaries and requirements. Other times, I’m just the medium through which their creativity is brought to life – and that can also be a really neat process for me.” 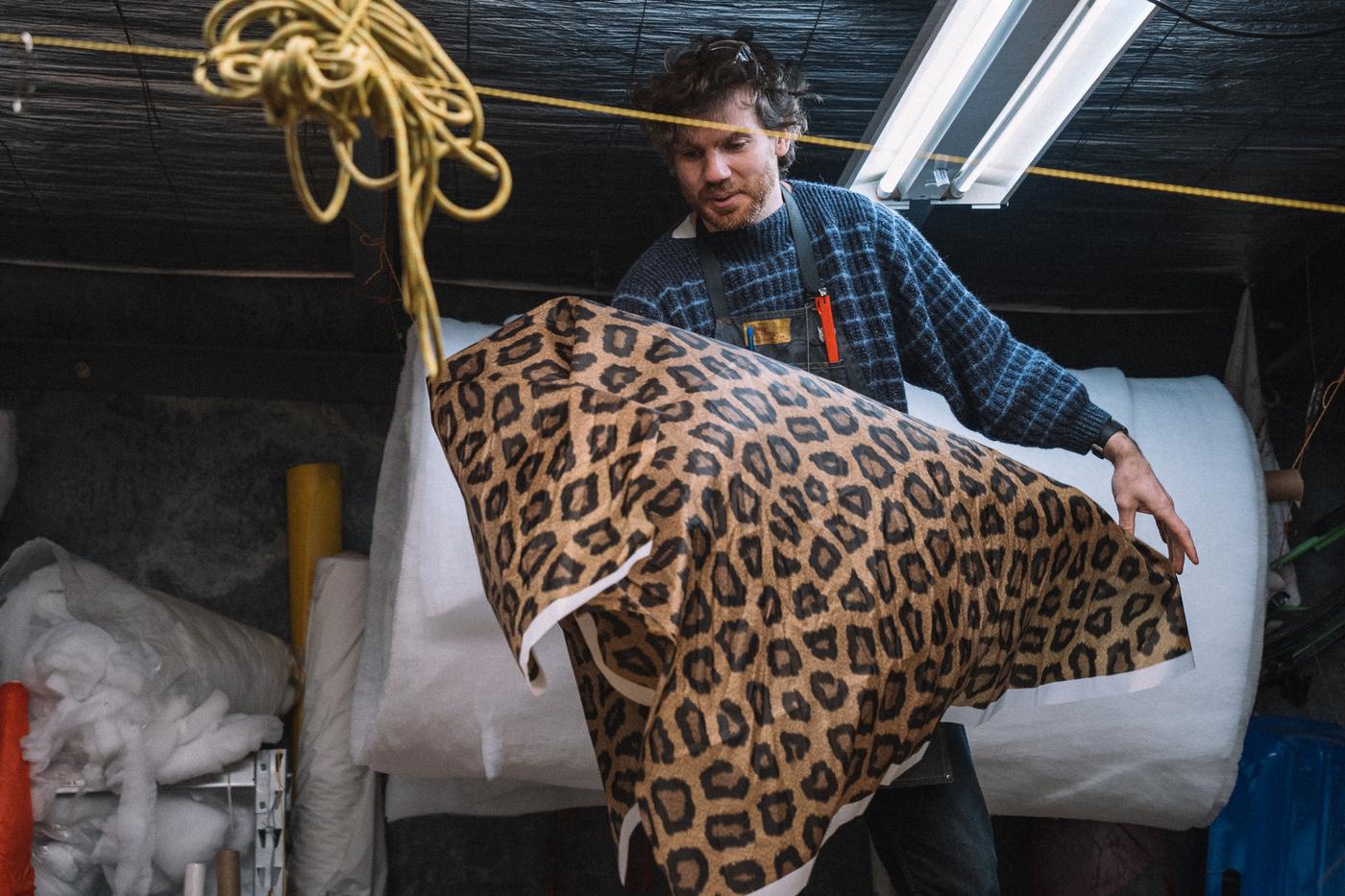 Evan’s fearless, “hell yeah” and no holds barred mentality means that he’s sewn up some of the most unique, fun, and downright outrageous gear I’ve ever seen from a single maker. From 60 metre protective covers for CSIRO’s satellites in the Australian high country, to ultra-light emergency shelters, designed to be tensioned between two snow-mobiles for the Australian Antarctic Division his makers portfolio is exceptionally diverse.

But perhaps the most outrageous example of what Evan’s happy to build comes in the form of a rather special sleeping bag. As Evan slides his hands into his leather apron and removes his glasses, I can feel a sense of fun and nostalgia wash over him. He pauses for a moment, cracks a smile, and reminisces, “There was that time I made a fully waterproof sleeping bag for a guy who was going into a war-zone,” he remembers. I burst out in nervous laughter. “He needed a bag that could fit himself, his dirty boots and all his weapons inside. So we designed it with quick-release zippers and a breathable but waterproof fabric so even if he was caught in an emergency situation, he could burst straight out of the bag and into the action. We had to get it perfect, ‘cos let’s face it, he was going to be in some life or death situations.” 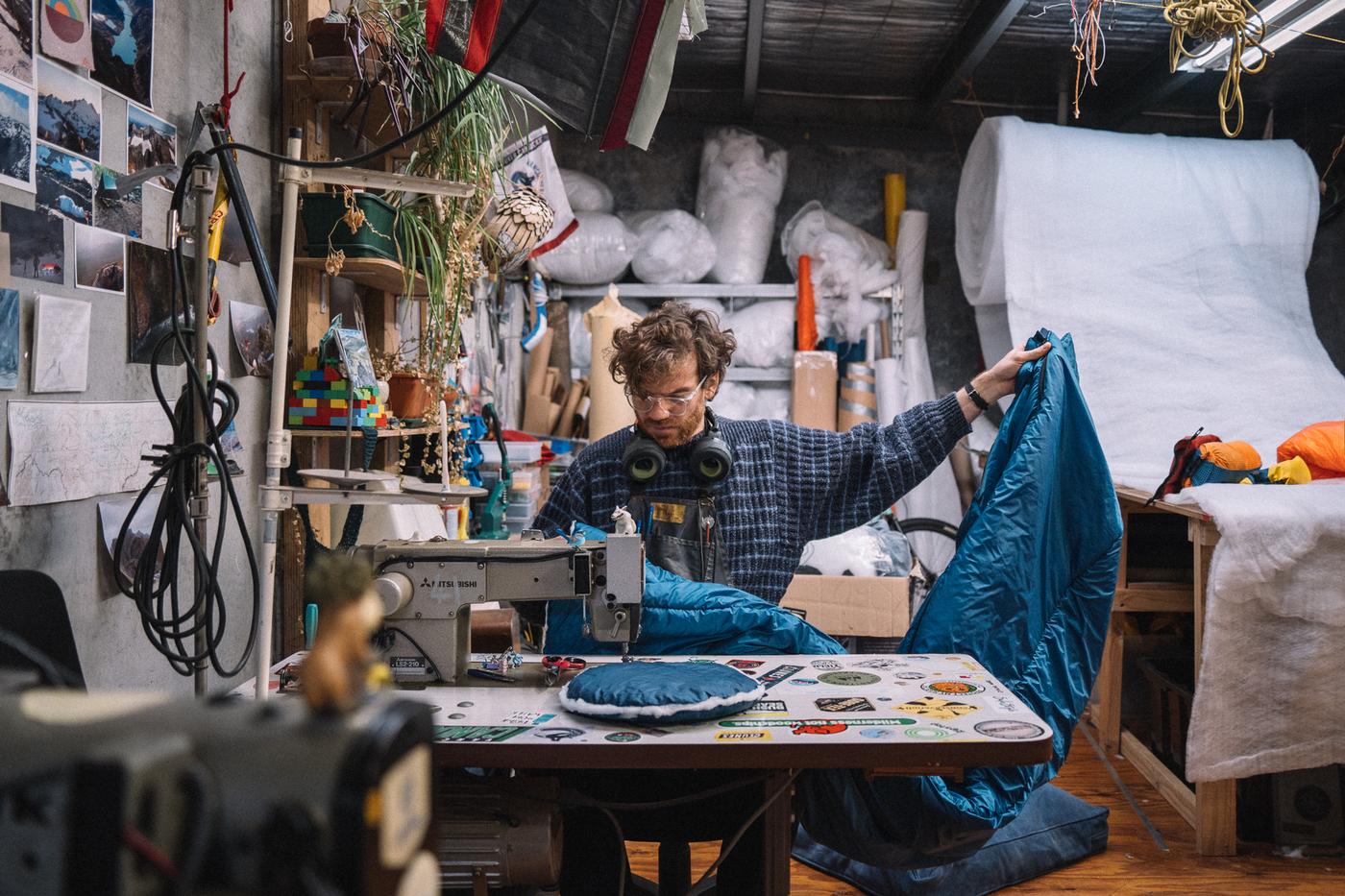 A real make do and mend ethos permeates all aspects of Terra Rosa Gear, especially in the studio space, which is a riot of colour and chaos. A huge roll of synthetic insulation dominates the back wall. The crackle of old vinyl playing country music fills the air once more; while projects hang from a spider’s web of old climbing rope that weaves around the studio. At first glance, the space feels fit to burst. But get Evan talking and you’ll soon see that each item has a story and a distinct reason for being. Far more than merely ephemera, the trinkets and treasures found here represent a very special part of the brand and its unique identity. Perhaps the most recognisable facet of Terra Rosa’s identity is the “offcuts range” — a product line that pays homage to both Evan’s starting point as a maker and the very genuine problem of the environmental impact caused by manufacturing specialised gear.

In order to provide the technical features we’ve all come to expect in our gear, chemical coatings (called perfluorinated chemicals) have to be used. While the use of PFC’s is likely here to stay (at least until equivalent eco-alternatives are competitive), a growing number of brands are looking at novel ways to reduce their environmental damage by upcycling, recycling and reimagining old gear in new ways. For Evan, there’s real reward in it. “Making this style of gear is so interesting; every piece is so unique and has its own character. I don’t even know how they’ll come off the machines honestly, and that makes it super special for me too.” The offcut range by TRG integrates scrap materials – otherwise destined for the trash – into unique and one-off garments. These pieces carry all the technical finesse you’d expect from premium gear, but with the extra ethical credentials so many of us are seeking in our gear selection today. A Bridge Between Technical and Ethical

Our visit with Terra Rosa Gear left us with more than just good vibes and a brilliant new friend. Evan also sowed some seeds of change; inviting us to rethink the way we looked at our previous gear choices and the kit we already owned. Instead of simply chucking gear away, Evan’s enthusiasm for recycling and avoiding environmental harm showed us that these old garments are more than just merely material; they’re living adventure canvases just waiting to be reimagined, reinterpreted, and loved, once more.