“Our driveway is rough.” Those are the words John Campbell of Alpine Luddites used to describe the windy, undulating, treelined drive, freshly blanketed in seven inches of snow, tucked away in the quiet town of Westmore, Vermont. It’s an understatement — a theme that emerges as you pick Campbell’s brain about his work making ultralight and durable bikepacking bags and backpacks for outdoor endeavors.

His shop is located on a picturesque fourth-generation Vermont family farm of 1,100 acres, a place secluded enough that your cellphone welcomes you to Canada as you crest the hill of his aforementioned driveway. Around the back, past the woodshed and out toward the fields, you’ll find Campbell’s workshop. It’s an idyllic setting that easily could have been the setting for a Hudson River School painting in the mid-19th century. Step through the door however, and you’re met with contrast — and that contrast is about as stark as you would imagine after a glance at The Alpine Luddites logo, a riff on the Sex Pistols’ God Save the Queen album cover. The soundtrack, naturally, is punk, which Campbell has been listening to for over 30 years. The National, Sex Pistols and a healthy mix provided by Seattle’s KEXP pump in over the steady rhythm of an arsenal of Juki sewing machines. It’s not just the music that he’s a fan of, but the “whole punk movement of do-it-yourself,” as he puts it. The DIY mentality is literally woven into the fabric of the Alpine Luddites brand. Campbell made his own backpacks in high school; he even made hot pink and black climbing pants for himself because in his words, “That’s what everyone in Europe was wearing” — in reference to the climbers and mountaineers of the time. He has a long history in the outdoors. Photos hang in the shop of Campbell at age seven, carrying an external frame pack on the trail. He’s an ice climber, two-time Tour Divide finisher, one-time outdoor brand sales rep, former Outward Bound instructor, the list goes on. He’s traveled across the globe climbing and pursuing a life in the outdoor industry from South America to Alaska to New Zealand to Africa. But it always came back to making things. Those days at Dana Designs, along with Campbell’s long career in the outdoor industry, were a hell of a foundation to build Alpine Luddites upon. In 2014, after (as Campbell describes) “wanting to do this since high school,” he launched Alpine Luddites. At first, he made vintage pack reproductions — dutifully stitching together authentic examples of packs from Chouinard Equipment and Karrimor — which immediately drew attention from Japan (half of the packs he sold in his first year went to Japan). From there, he built a client base through word of mouth and a hyper-limited selection of retail partnerships. He expanded his designs to include technical climbing packs geared for ice climbing, mountaineering, and lightweight backpacking. His experience climbing, ice climbing, and backpacking across the world meant that he knew exactly what his consumers wanted: lightweight packs that don’t sacrifice durability. As Campbell puts it, “Weight, durability, fit, all of those things matter. I like to make things that last.”

Campbell’s reputation for making the best packs available to outdoorsman spread far and wide. Photos of his packs in action can be seen hanging in the workshop, serving the likes of Jottnar’s Tommy Kelly in Scotland or AAI Guide Dallas Glass on the Lhotse face of Mt. Everest to name a
few. It wasn’t until he raced the 2015 edition of The Tour Divide that Campbell dipped his toes into making bikepacking bags. He had the race on his radar since 2009 when he saw Mike Dion’s Ride the Divide movie in Bozeman, Montana. Despite being a lifelong cyclist (his first bike tour was a ride the length of Cape Cod and around Martha’s Vineyard on a Univega 12 speed with Rhode Gear panniers when he was in high school), bikepacking bags weren’t initially on his road map for Alpine Luddites. “I never planned to make them,” he said. “I never really planned to make my own bags [for the race]. I was going to buy them.” But a few things fell through and Campbell turned to the sewing machine. Much in the same way he did to make the hot pink and black climbing pants of his youth. If he wasn’t able to get what he was after, he was going to make it. The resulting bags turned heads at that edition of The Tour Divide, and despite a DNF at the Idaho border, the bags were in great shape. It wasn’t long before he was fielding requests from customers for bikepacking bags of their own. From handlebar bags to frame bags to full-length top tube bags and seat bags, Campbell makes them all — lightweight and built to last. Case in point? One of his personal frame bags has between 8,000 and 9,000 miles on it. The bag wears its mileage as a badge of honor, a testament to the quality craftsmanship that Campbell puts into each Alpine Luddites product. In fact, other parts are likely to fail before any of Campbell’s bar-tack-reinforced stitch points are. Among the projects in the Alpine Luddites shop was Brett Stepanik’s (who Campbell sponsors) 11-ounce frame bag, in need need of a new zipper slider. The bag has seen the Colorado Trail twice, the Arizona 750 three times, the Tour Divide twice, and most recently the Arkansas High Country Race — where Stepanik placed first in the single speed division. Alpine Luddites bags have also graced the dirt of the Silk Road Mountain Race and the Atlas Mountain Race. 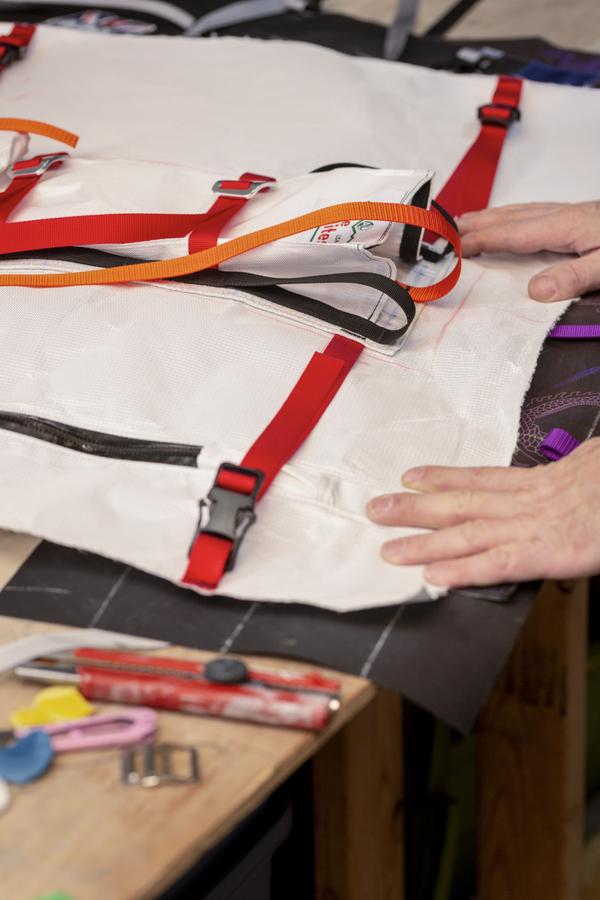 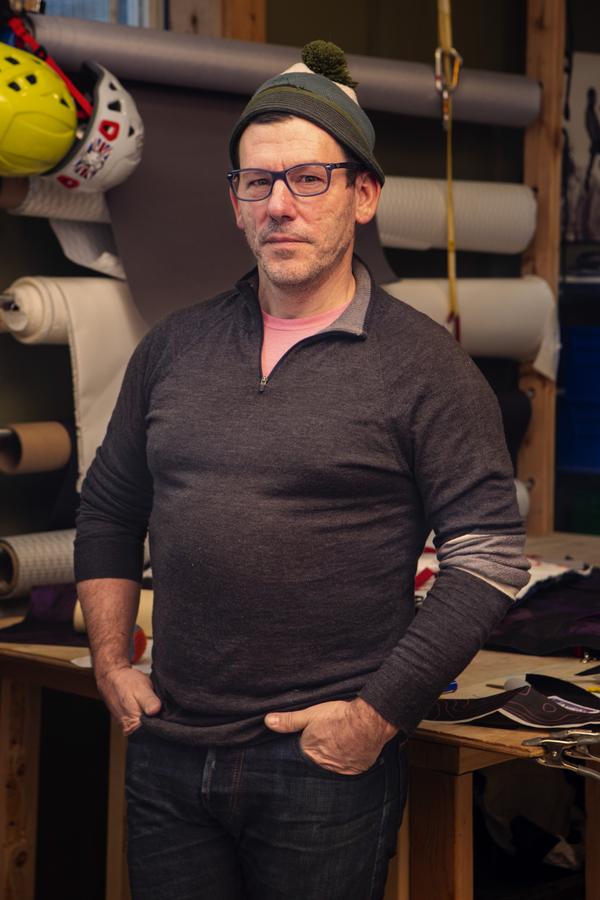 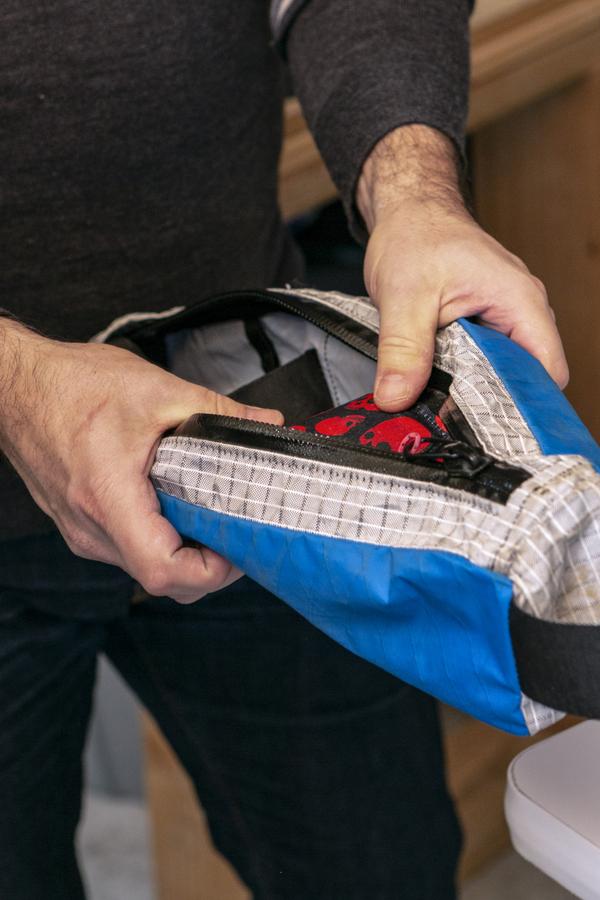 By now, you’re probably convinced that you need a set of Alpine Luddites bags for your trusty steed — and you’re not alone. But, given the custom made-to-order nature of Campbell’s process, you can’t simply head over to an ecommerce site and order up some bags. After downloading and filling out the custom bike bag order form from the Alpine Luddites site, the real process begins. Over phone or email, Campbell will parse out the type of bag you’re after from sizing, to material, to shape and any special features. Then it’s into the queue and the wait begins. Campbell’s waitlist is many months long (it has stretched up to 11 months at times). “I’m immensely grateful that I am so backlogged,” he said. “I’m immensely amazed every time I get another order.” There’s the understatedness and humility again. But there’s another option to get your hands on an Alpine Luddites pack or frame bag: go back to school. Campbell, an adjunct professor at Sterling College in Craftsbury, Vermont, teaches both students and the general public (through a continuing education program) how to use industrial sewing machines, the basics of gear repair and also mentors them through work in his shop. In exchange, students get course credit and the opportunity to build their own bag. It’s a unique offering, and one that Campbell says has garnered a lot of attention from media outlets and universities alike. Whether you build it yourself or enlist Campbell and the decades of sewing experience he has under his belt, you simply can’t go wrong with one of his packs. It’ll long outlast the tires, chain, and cassette you have on your bike. And unlike those parts, when Alpine Luddites bags give up the ghost, it’s only temporary. They can be rebuilt, repaired, and reused. I think we can all agree that’s a good thing.

For those interested in taking Campbell’s class through Sterling College from May 27-31, 2022, you can find more information here and here.