1. The México-USA border in Tijuana_ Then one day it turns out that weddings and all kinds of gatherings were canceled till further notice and a lot of people stopped wearing fancy clothes, at least from the waist down. Suddenly, Irlanda found herself without her source of income and was forced, along with several other small businesses, to leave the Mercado where she had her workshop, moving all operations to her apartment. But amidst the cloud of confusion, she saw something clear: it was time for her long-postponed dream, Movigo, to be brought to life. Movigo, “movement” in Esperanto, is the name she chose for her bike bags and accessories line, and with the increase of people riding bikes in Tijuana she thought she could use her experience as an urban rider to offer solutions for carrying stuff by bike; since it had been a while that I wanted a half-frame bag for my road bike, I sent her the measures and I turned into the proud owner of the first Movigo made frame bag. One day, she called me and said “I have turned away a dress!”; taking a proper leap of faith, she wanted to put all her energy towards making bike accessories. Some months later Karla and I flew to Tijuana when we heard the city was offering covid vaccines to everyone who wanted it (our home state is still far from making it available to people our age), so we made time to visit Irlanda. The Movigo headquarters are currently occupying a few square meters in a small apartment but her products are slowly taking shelf space in local shops and in other states of México. Irlanda brought out the two folding bikes she keeps in a little corner and we negotiated our way through Tijuana’s traffic; having never ridden a 20-inch folding bike, I smiled all the way ‘cuz they’re way fun! We arrived at The Ride Co., a bike shop that has her pedal straps for sale, where she had an appointment with a customer to talk about a handlebar harness; while we were there, somebody else jumped in and ordered a custom frame bag. Hiding behind my Mocaccino I witnessed Irlanda confidently make her way on a place plagued by bearded bike bros just like myself, looking closely at details and taking notes as if she were measuring a body for a dress, but instead, she was now measuring tire clearances and metal tubes. 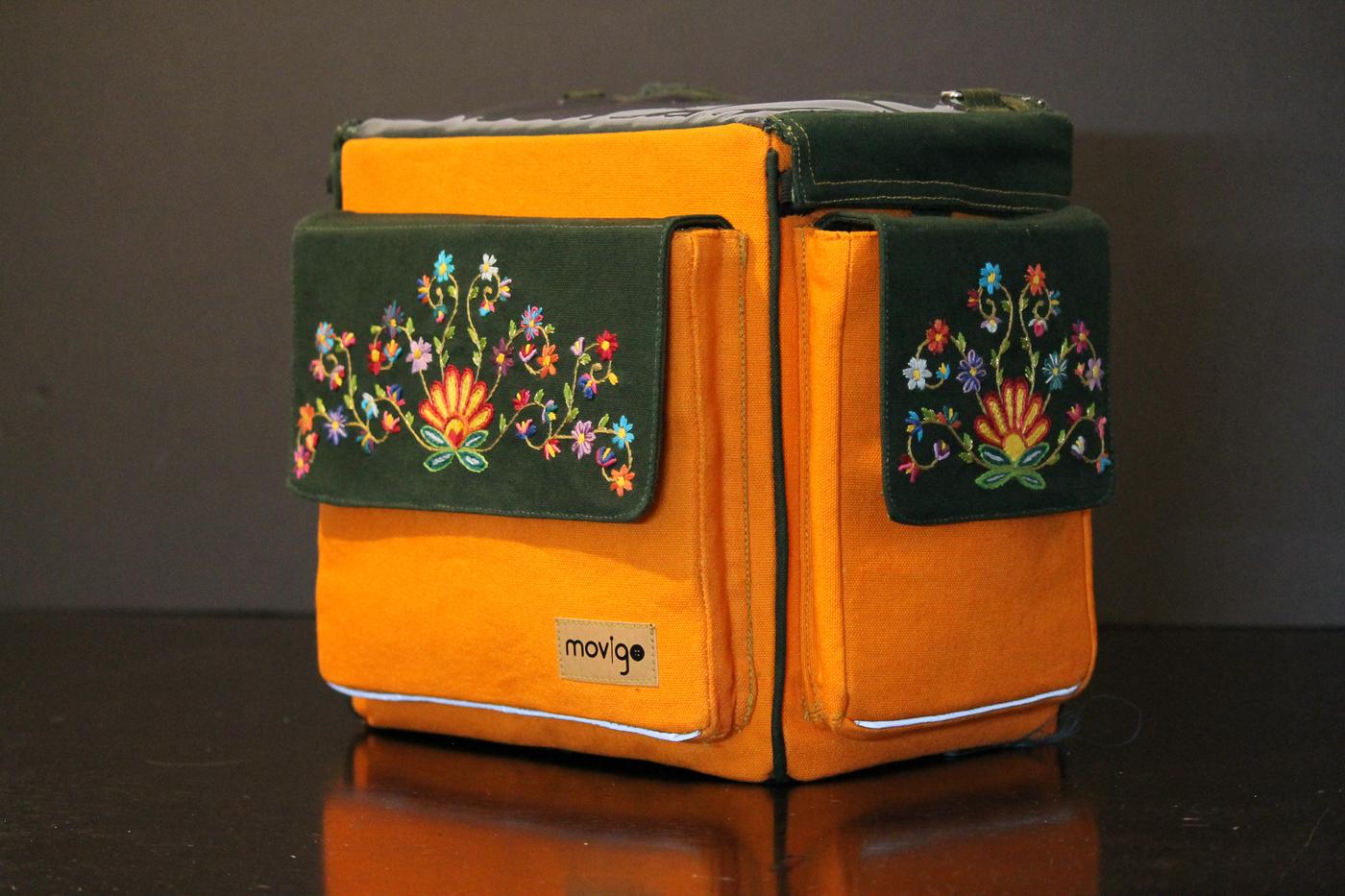 Movigo’s latest offering is a randonneur bag which we missed seeing in person by a few days, as it had been sent to its owner in San Francisco, California, so her daughter lent us two photos she took to show them here. Irlanda said this is her masterpiece so far, as the customer wanted his bag to have embroidery which took many hours of work; I couldn’t help myself and get in the line for the next one. With bike touring and cycling, in general, gaining more popularity in México, Irlanda plans to get a dedicated space for workshop and showroom and bring high fashion bicycle bags to the world; Movigo is, as far as my knowledge goes, the only woman-owned bike bag initiative in México and adding another woman to the team is in Irlanda’s short term goals, as of right now she has to find the way to balance being a human mom, a cat mom, a bag maker, and herself simultaneously. Irlanda is the kind of person who is the change she wants to see in the world, so I’m looking forward to seeing her project flourish and evolve.