You might recall seeing the half-frame bag from Vernacular Sewn Storage (VRNCLR) on the prototype Super Something gravel bike Adam Sklar had at Ruta del Jefe. VRNCLR is the Oakland, CA – based bag company of maker Tom Gilpatrick. Tom has been working in sew business for some time now, currently focusing on bags for bikes and also Go Fast Campers (GFC). Earlier this summer I was in the Bay Area with filmmaker Justin Balog and we had a slice of time before heading to the airport to catch flights home, so stopped in to visit with Tom and check out his space in the eclectic O2 Artisans Aggregate. I first learned out about Tom and his products after purchasing a GFC Platform Camper last fall. There’s a great GFC community forum that hosts a wide range of conversations – from camper mods to troubleshooting, and accessories. It was in the forum that I stumbled across a few threads discussing aftermarket storage products made by a small brand, none other than VRNCLR, with strong ties to the folks at GFC. Framebags that attach to the structural triangles of the camper body, just like a bike framebag? What a brilliantly efficient idea! 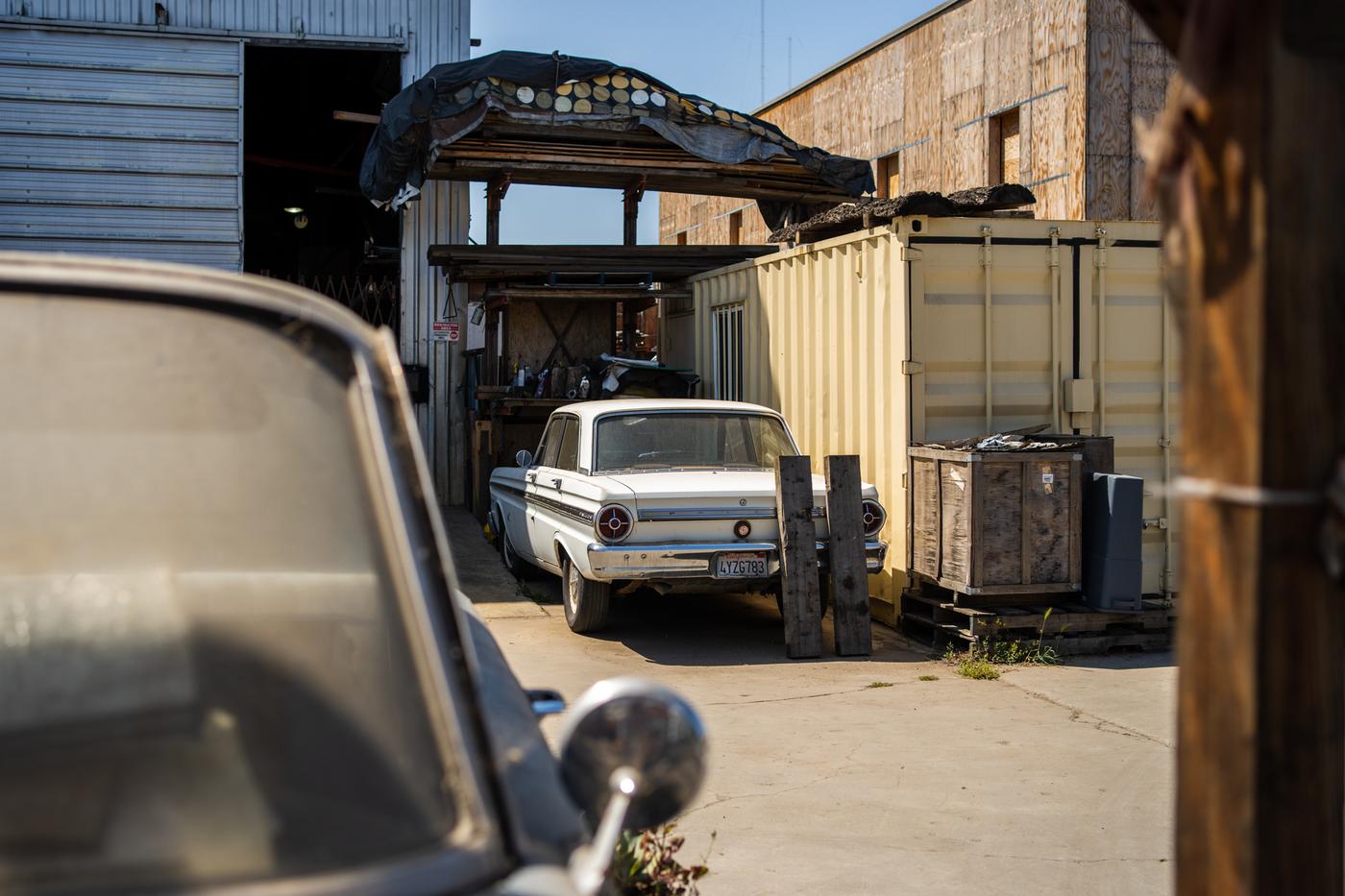 The word vernacular is typically used in reference to language and architecture that’s ordinary, functional, “of the people,” and eschewing formal education or high style. Almost by chance, and with no prior training, Tom started sewing in Montana after moving there from Maine at the age of 18 for college. He connected with a childhood friend in Bozeman making small-batch bags/backpacks for his brand Buck Products. Needing part-time work to support his skiing habit, Tom started helping out with pre- and post-sewing, while also receiving a fortunate crash course in fabric cutting, notions, finish work, and other aspects of making high-quality sewn products. Thus, when it came time for Tom to venture out and start his own company, Vernacular was a fitting moniker in its references to functionality, evolution over time, and designing without professional guidance. 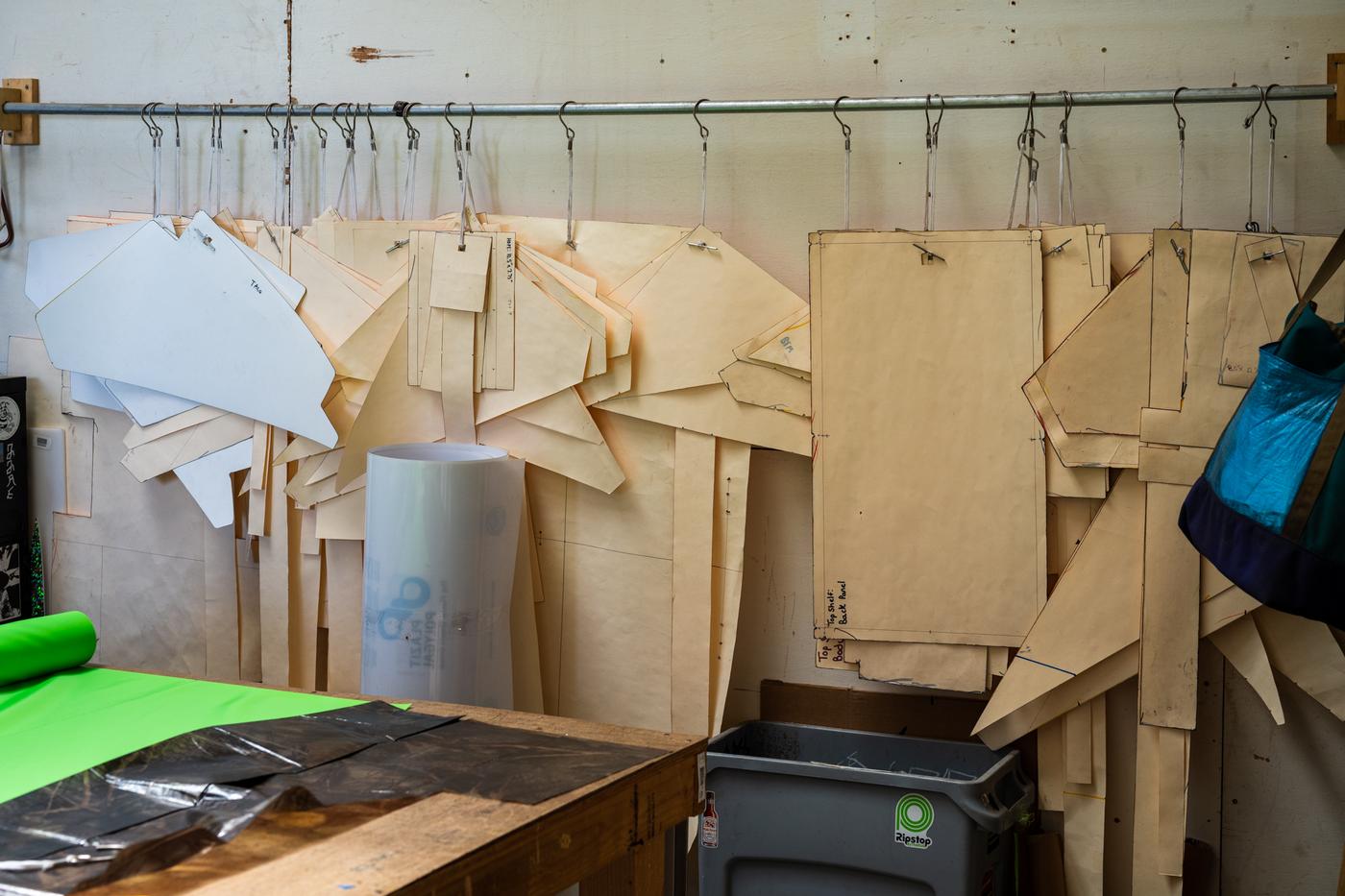 Tom worked for Buck Products and another production sewer for a few years, and then transitioned over to manufacturing skis for Caravan Skis where he learned to work with different types of tools and materials like wood and composites. Then, after accumulating years of experience as a craftsperson, Tom had become something of a known quantity in Bozeman when Graeme MacPherson from GFC reached out via a mutual friend looking for someone capable of sewing large tents for the nascent platform camper company. 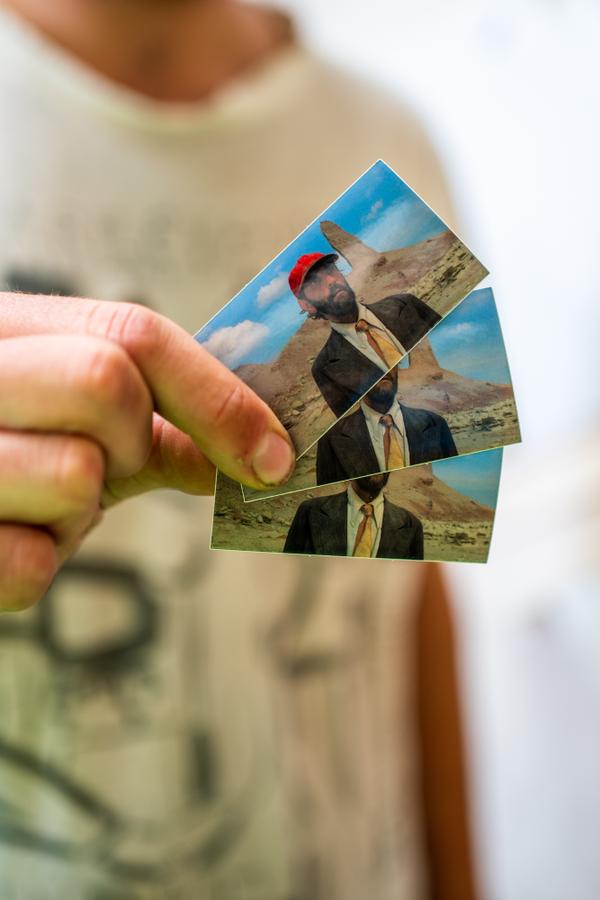 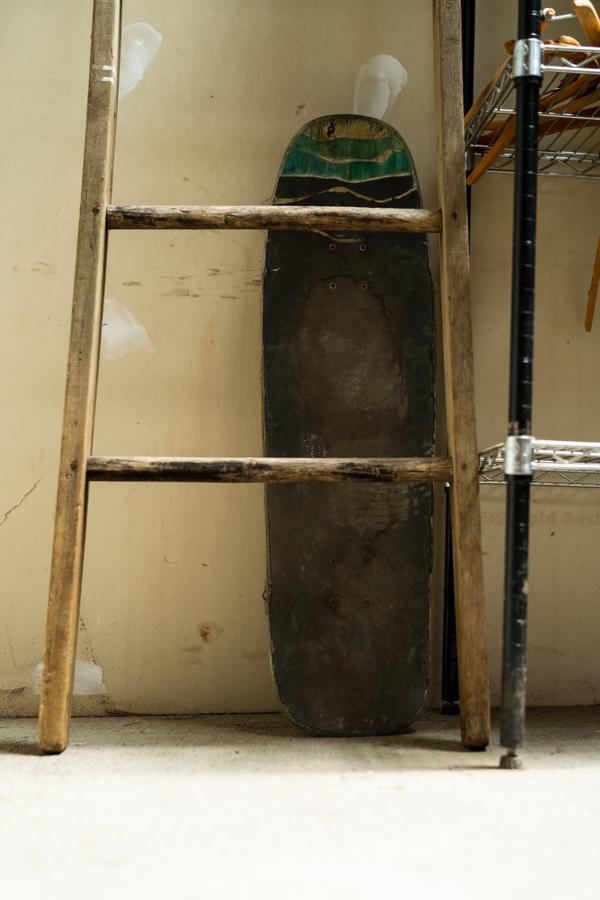 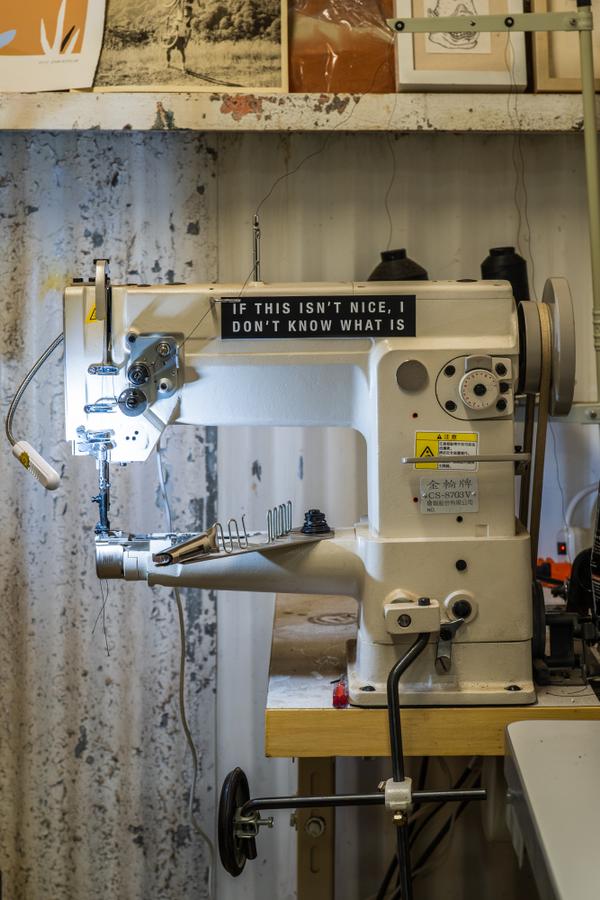 Tom was one of the first GFC employees and worked there when production was in co-founder Wiley Davis’ machine shop. They were sewing everything with an ancient dumpster-find Consew sewing machine with marine vinyl for the tents, rather than the ripstop nylon used now. Like working at most typical startups, things were always interesting and in a continual state of product development. Tom worked there for a little over two years, the last six month of which he lived out of his GFC-equipped pickup. Wanting  to live near the ocean again as he did in Maine as a kid, and in a bigger city, he left Bozeman for San Francisco and again scrambled to find work. Tom quickly realized how good he had it in Bozeman at GFC – with a flexible schedule and great management/co-workers – and finding a comparable work situation was not easy in the Bay Area. He’d made some bike bags for friends like Adam in Bozeman and drew on that experience – in addition to his intimate relationship with GFC campers – to make accessories and framebags to get by for a while. And from then on, Tom’s business just grew. With the popularity and volume of GFC campers being sold, in addition to so many people wanting to carry stuff on their bikes, VRNCLR gear has been in steady demand since inception. Self-employment is as much about doing something he’s good at, as it is about determining his own lifestyle. When Tom isn’t cranking on the sewing machine, he’s bugging out of the city in his Tacoma, loading up his bike for a tour, shooting rolls of film with his Contax T2, watching Paris, Texas on VHS, or floating out of the bay in his sailboat. He’s not a conventional 9-to-5er, but rather an analog artisan living on his own terms. Tom’s three most popular products for GFC campers are Frame Packs, the Top Shelf, and Bedding Catch. He also makes a Boot Bag and Maxtrax Holster. The Top Shelf was his first camper-specific accessory and still his favorite. That, and the bedding catch, were born from ideas he had while living in his truck for sustained periods of time. Since the GFCs don’t have built in storage options, Tom made these add-ons to help folks keep their gear and essentials neat and tidy within the tent area. 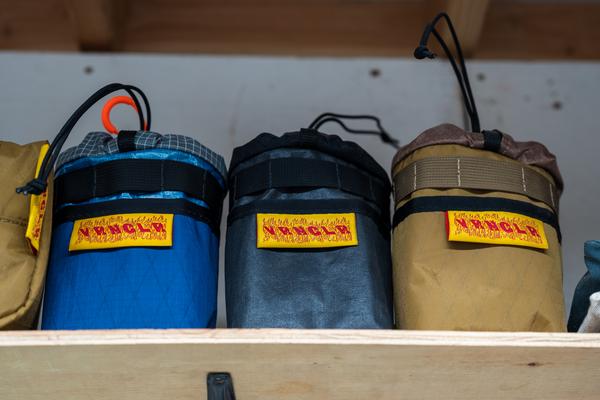 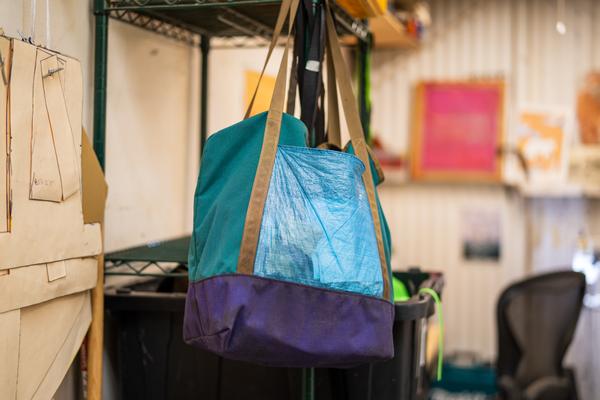 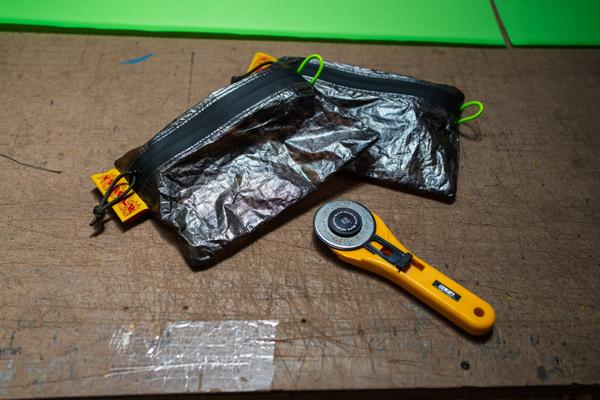 For on-bike luggage, Tom is selective in what he makes. With camper accessories taking precedence, he doesn’t want to encroach on the livelihood of other makers in the frame bag space. This is why you won’t see many of his frame bags out in the world and he’s currently prioritizing basket bags and Frontal Lobes, in addition to stem bags called the 22RE and reflector dubbed “psychedelic safety.” He’s also making various utility pouches and tote bags, all of which you can find in his webstore. The VRNCLR workshop is located in the O2 Artisans Aggregate Industrial Park on Oakland’s west side. Before finding space at O2AA, Tom spent some time at a stuffy shop in Berkley but quickly grew disenchanted by the culture there and was excited to find a home with like-mindedly adventurous craftspeople down in Oakland. The O2AA compound spans a city block and houses a wide variety of businesses including a woodshop, permaculture farming initiative, soba noodle production, bonsai gardens, distillery, and much more. They all fit into a community workspace model that encourages innovation, collaboration, and reduction/reuse of industrial waste. It’s an inspiring and inviting oasis within Oakland’s concrete jungle. Tom started out in a modified shipping container on site, which he immediately outgrew. Now, he shares a corner of what looks like an old hangar building with a woodworker. His space is simple and organized with materials and a variety of templates. There’s a loft space above the sewing machine alcove with one of Tom’s prized possessions on prominent display – a vintage Chouinard Equipment t-shirt that’s apparently seen its fair share of offwidth climbs. As a recovering vintage Chouinard collector myself, I had to climb up for a closer look. Isn’t it a beauty! 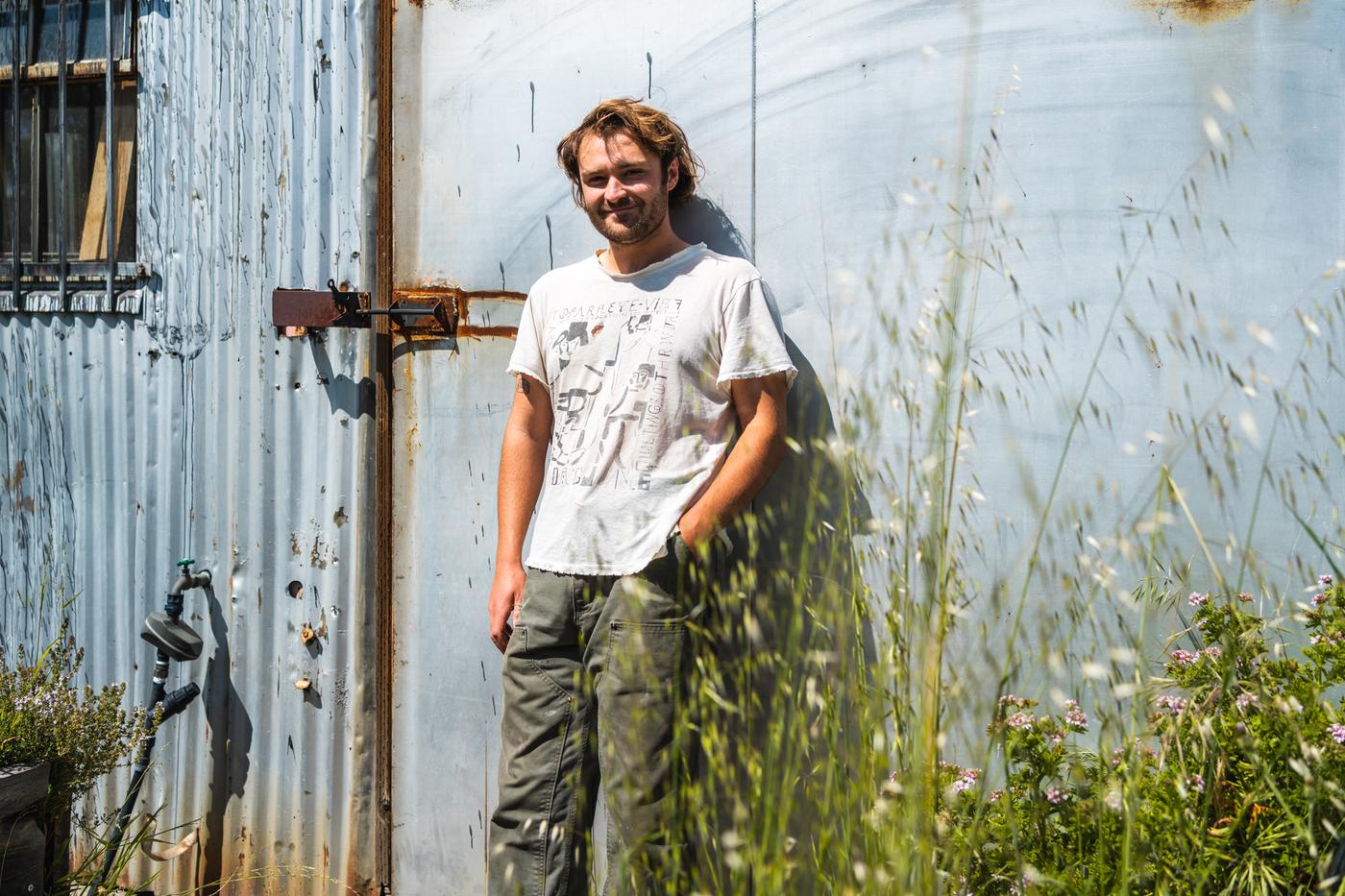 Check out the video below that Justin filmed during our visit and be sure to follow along on the VRNCLR Instagram and website for updates and future product announcements. And, if you own a GFC or other RTT, don’t sleep on Tom’s integral accessories!