The other side of things is custom work. With the stock offerings at reasonable prices, the custom work has evolved to be more involved and experimental. Full suspension, old hot-rodded Schwinn, handmade knives in steerer tubes, and today I bring you copper brake lines. 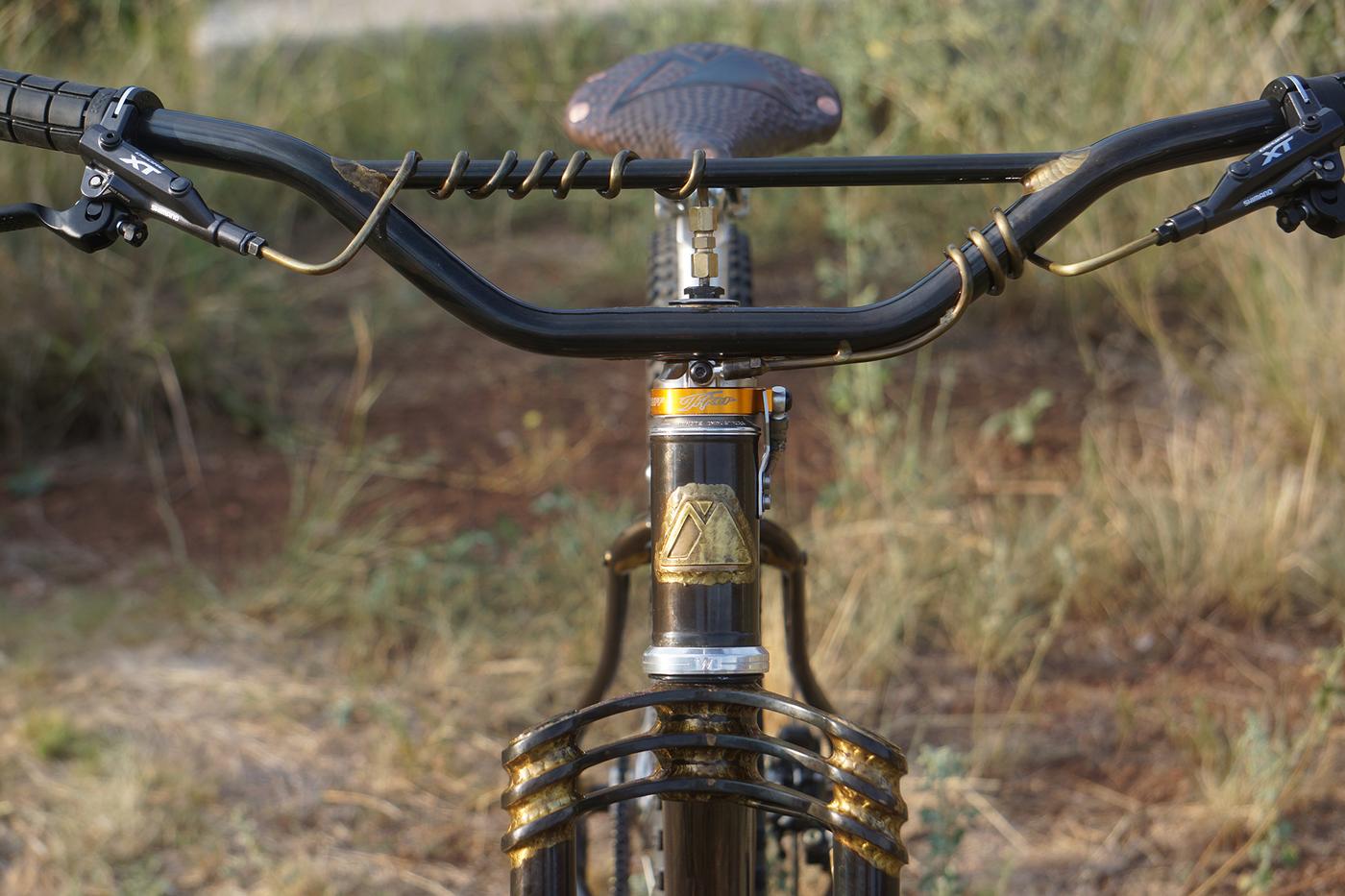 The project started with a direct message on Instagram from a guy I’m calling Mr. Tao. “Greetings from China, I really like your bikes, how can I get one?” Pretty vague, but ok. My reply, “check out the La Roca, it could be a good fit.” 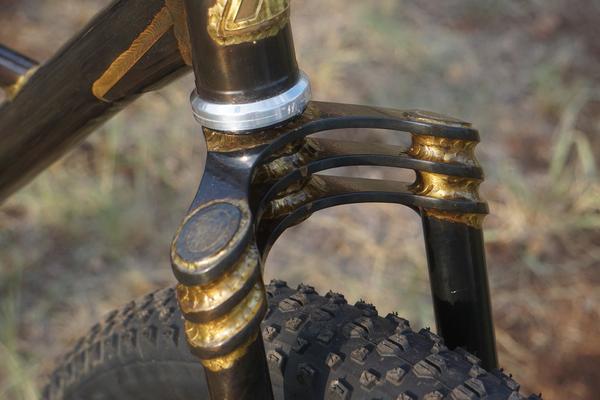 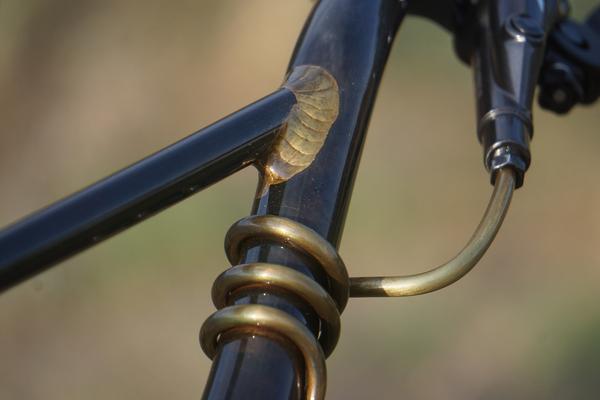 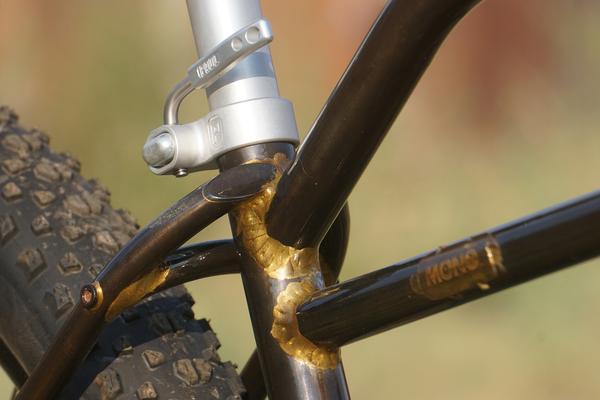 The difficulty when trying to get someone sorted out on a bike is knowing their goals. I usually like to have a phone conversation but the language barrier proved that to be unproductive. So we went back and forth sending photos of bikes and finishes. It became clear that this guy wanted as much handmade detail as I could offer. Once I had that pinned down, it was time to start dreaming up unique details. 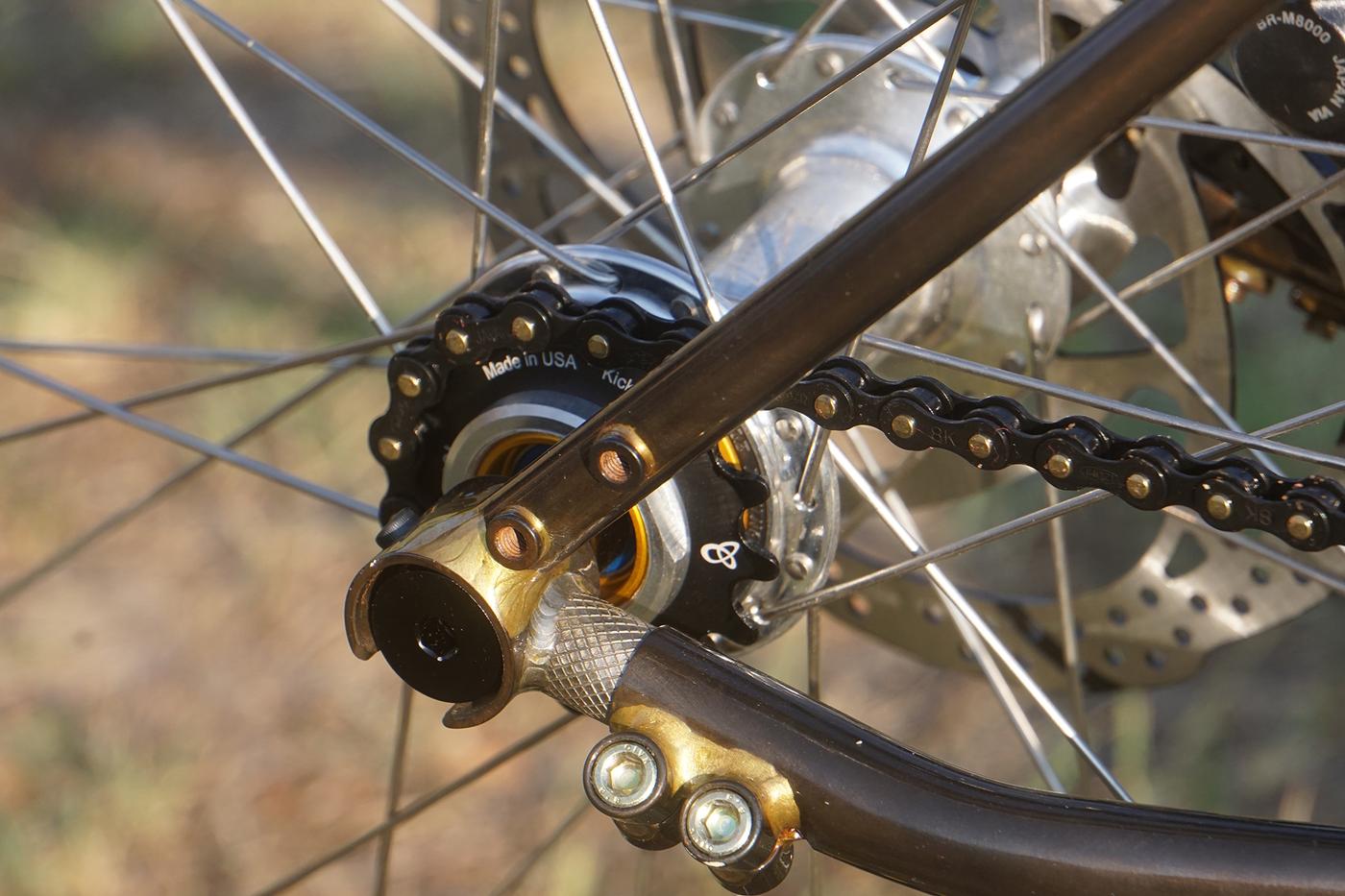 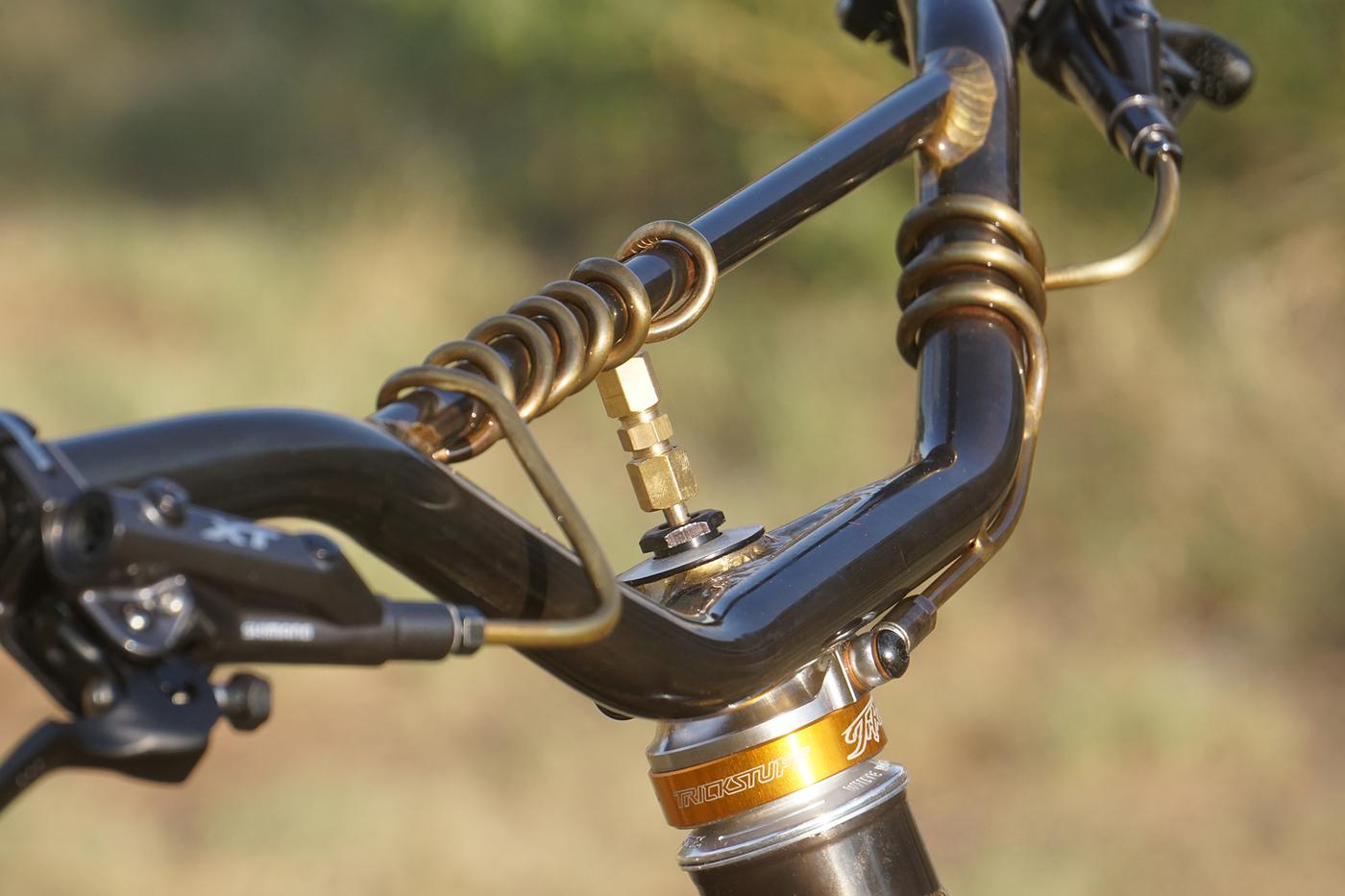 It wasn’t the first time for me. I had done it on a bike long, long ago…circa 2015…so maybe just one “long” ago. I used some automotive gauge copper tubing with cool formula oro brakes. I mention the brakes because a few of you might know that they take dot fluid. It was on a tour in japan that I paid my first cool guy tax on these babies and found a shop that reluctantly bled them…what came out was pretty black and gross. It’s not uncommon for brake fluid to be black and gross but when it’s dot fluid coming out of a copper line, you gotta wonder. 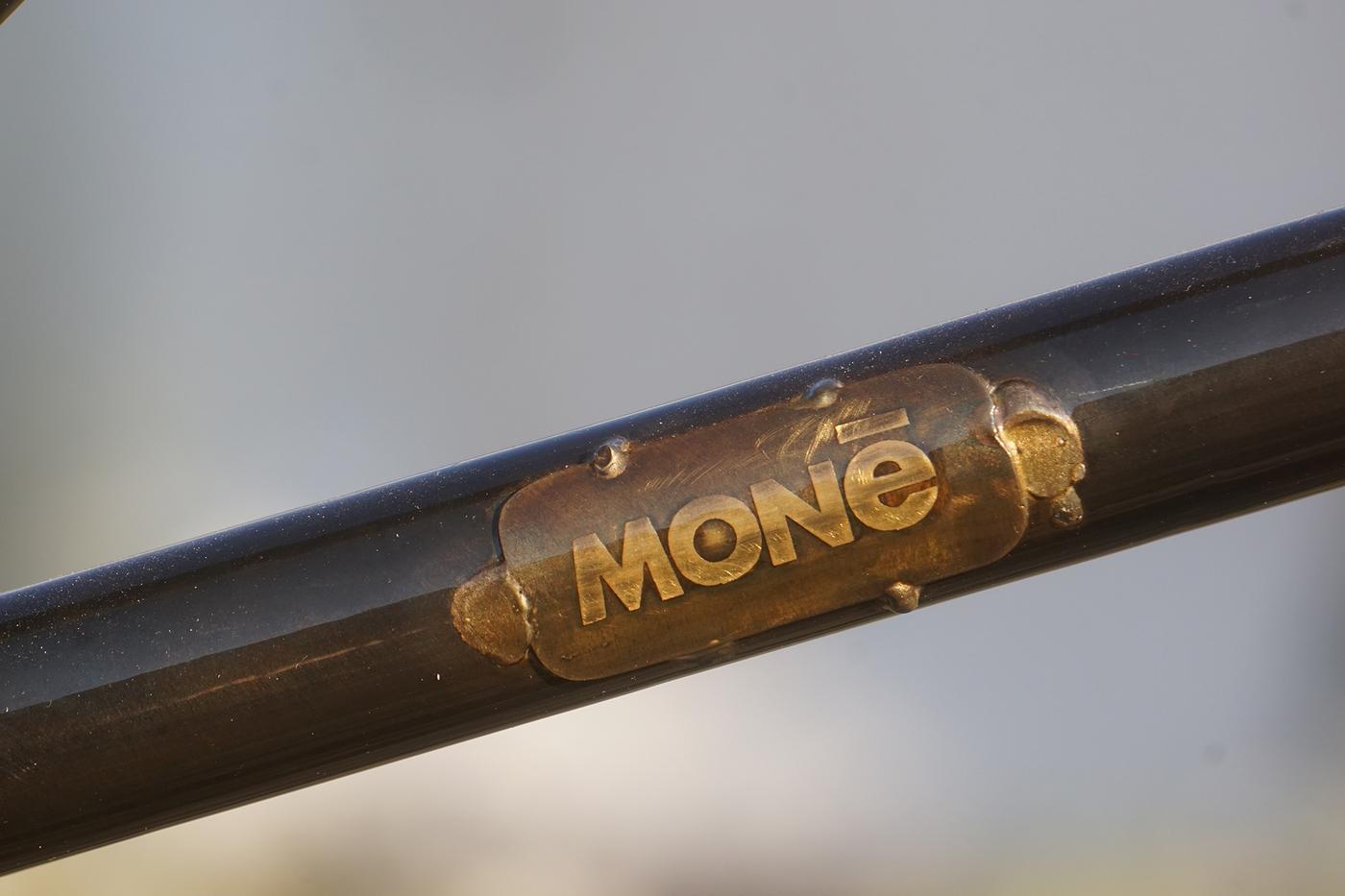 The second cool guy tax came at the bottom of the grand canyon in 2016. I had grossly underestimated the effort required to carry a loaded touring bike on one’s back from rim to rim, and after a swift jog to the bottom, I was pretty blown. In 200′ increments from phantom ranch to the north rim, I lifted and set down the bike hundreds of times trying to get out of there. In that process, I snapped off the connection between the copper line on the frame and the flexible stainless braided line that came from my lever…real cool guy. Oh well, live, and learn…I had one good brake to finish up with, so that’s what I did. 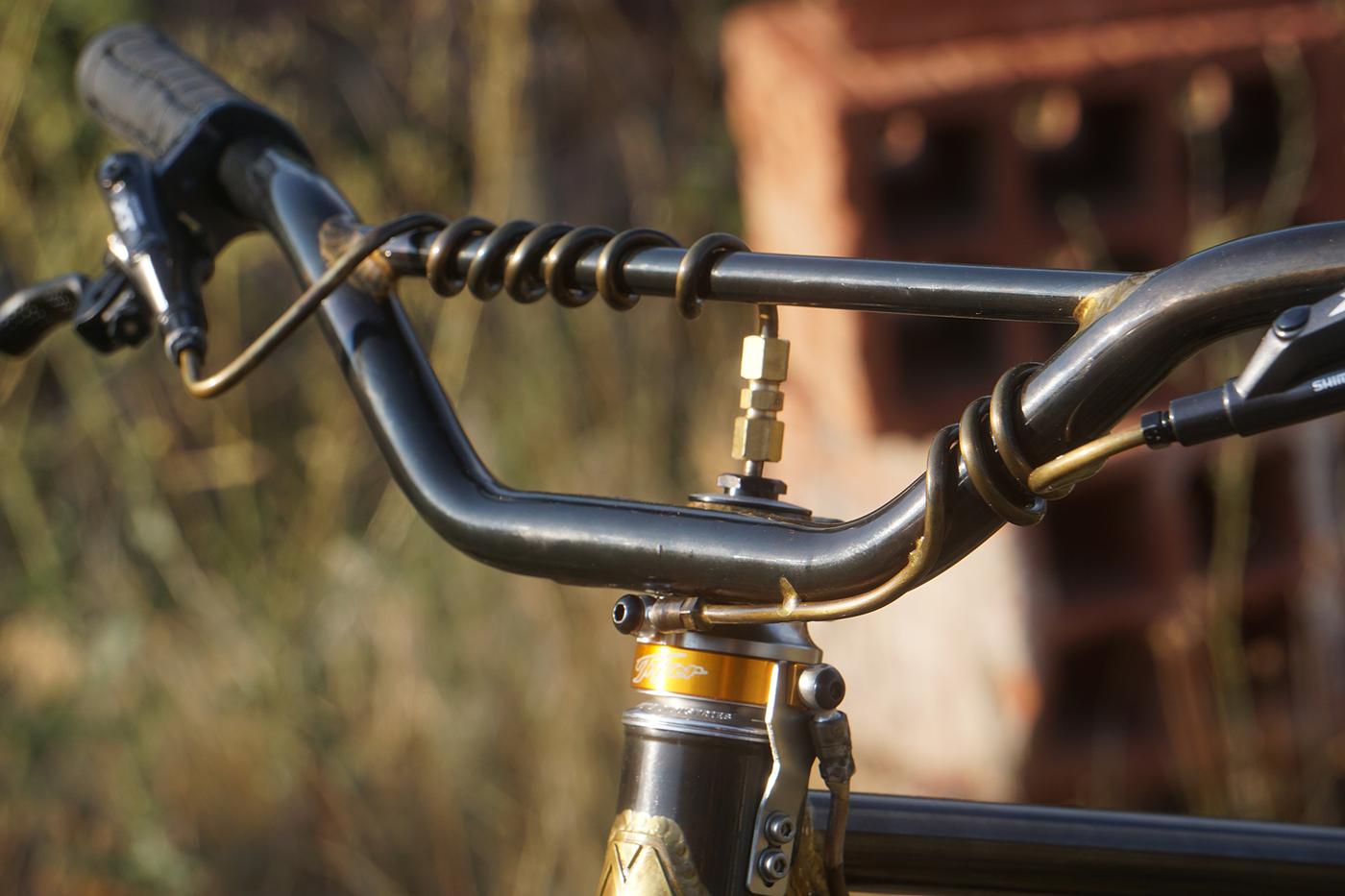 Fast forward 4 years. I still knew the hardline idea what a good one…but how to make it better? My idea…delete the flexible portion and braze it solid to the bars. Then how to get it to interface with the frame at the headset? A hydraulic gyro, that’s how. Made for dirt jumpers to do tail whips and bar spins, these simple units are just a couple O-rings and some precision machining. They come in mineral and dot flavors which have different o-rings to deal with the different fluids. 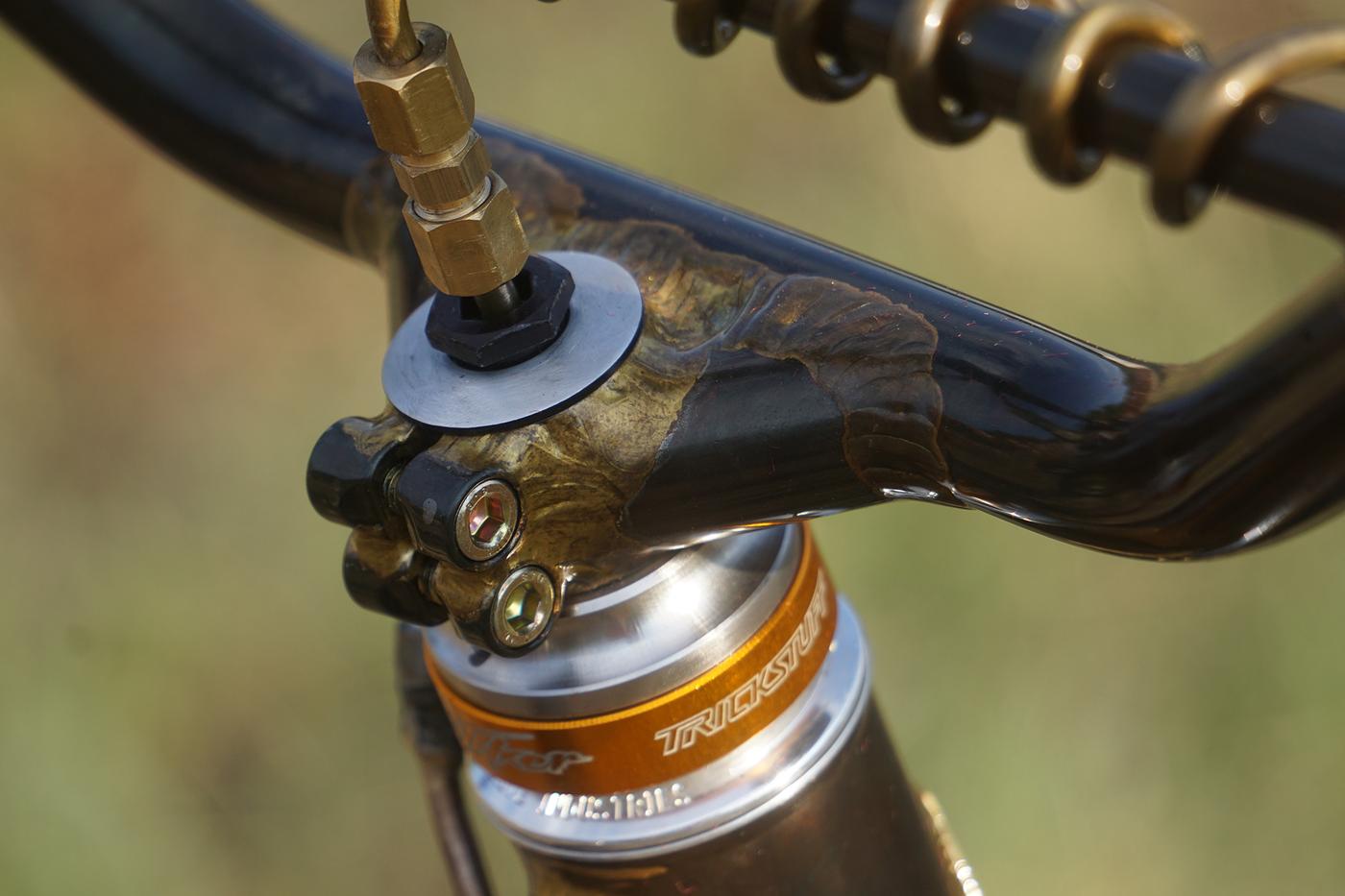 The front end is a bit easier, just send the line down the steerer tube and you’re done. Cane Creek and a few others make a special star nut and larger bolt that replace the standard starnut-top cap setup. The larger bolt is hollow allowing the brake line to pass directly through it. More dirt-jump barspin stuff. A small hitch is removing the bars from the fork. This can be resolved with a simple double compression fitting union which I found at my local hardware store. Done deal. 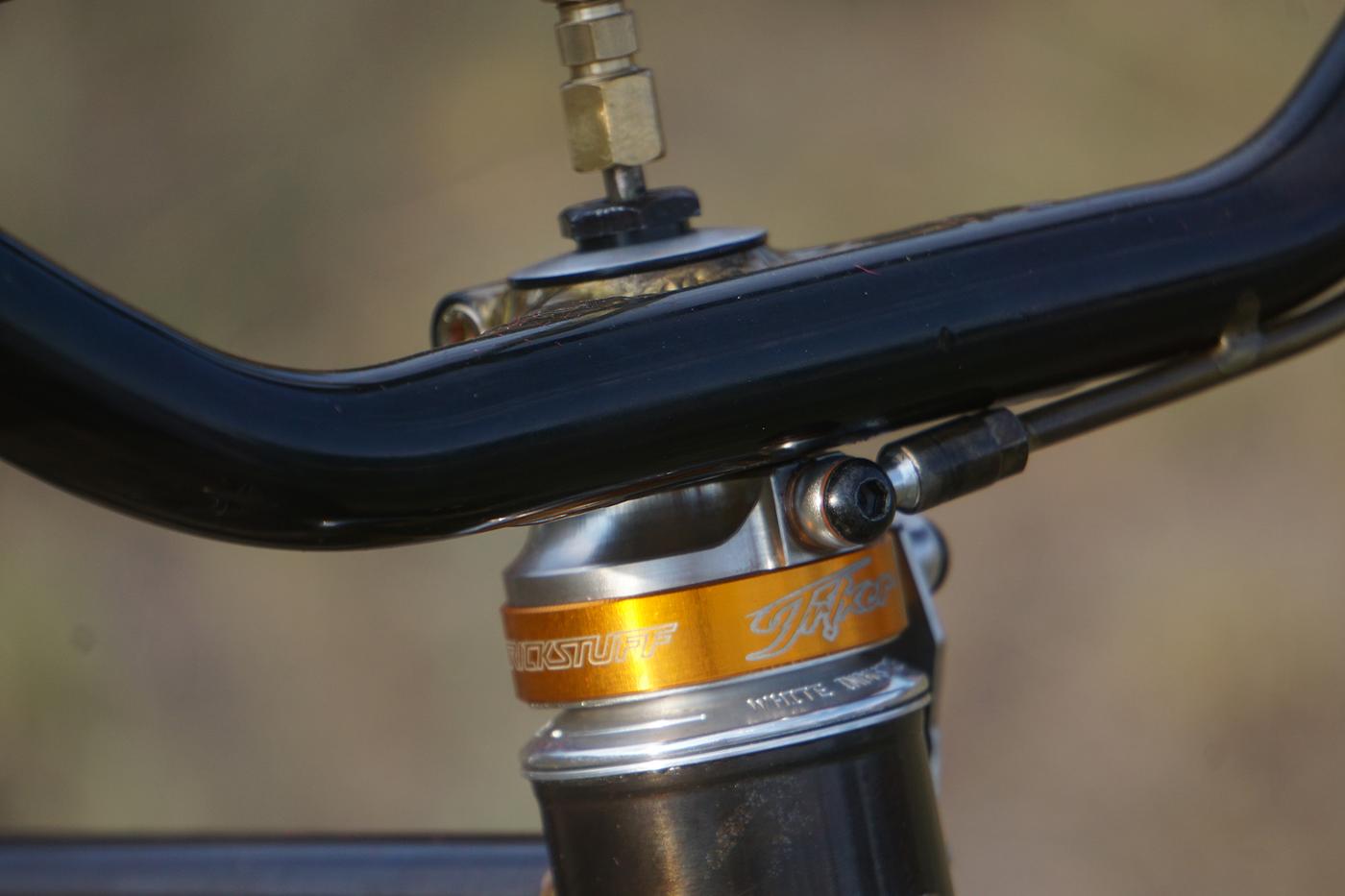 I had an atom-lab hydraulic gyro on hand, dot version to use with my fave Oro brakes. Mr. Tao took the deep dive into hydro gyros himself and decided he wanted a shiny Trickstuff one that’s pretty much unhavable according to my preliminary web search. Tao kept at it and found one of these somewhere in Europe and sent it over along with mineral oil to use with his preferred Shimano XT brakes. Mineral might also help with a possible corrosion problem that may or may not exist. To double down I found some old-timey automotive copper brake lines with some nickel in them for extra corrosion resistance. 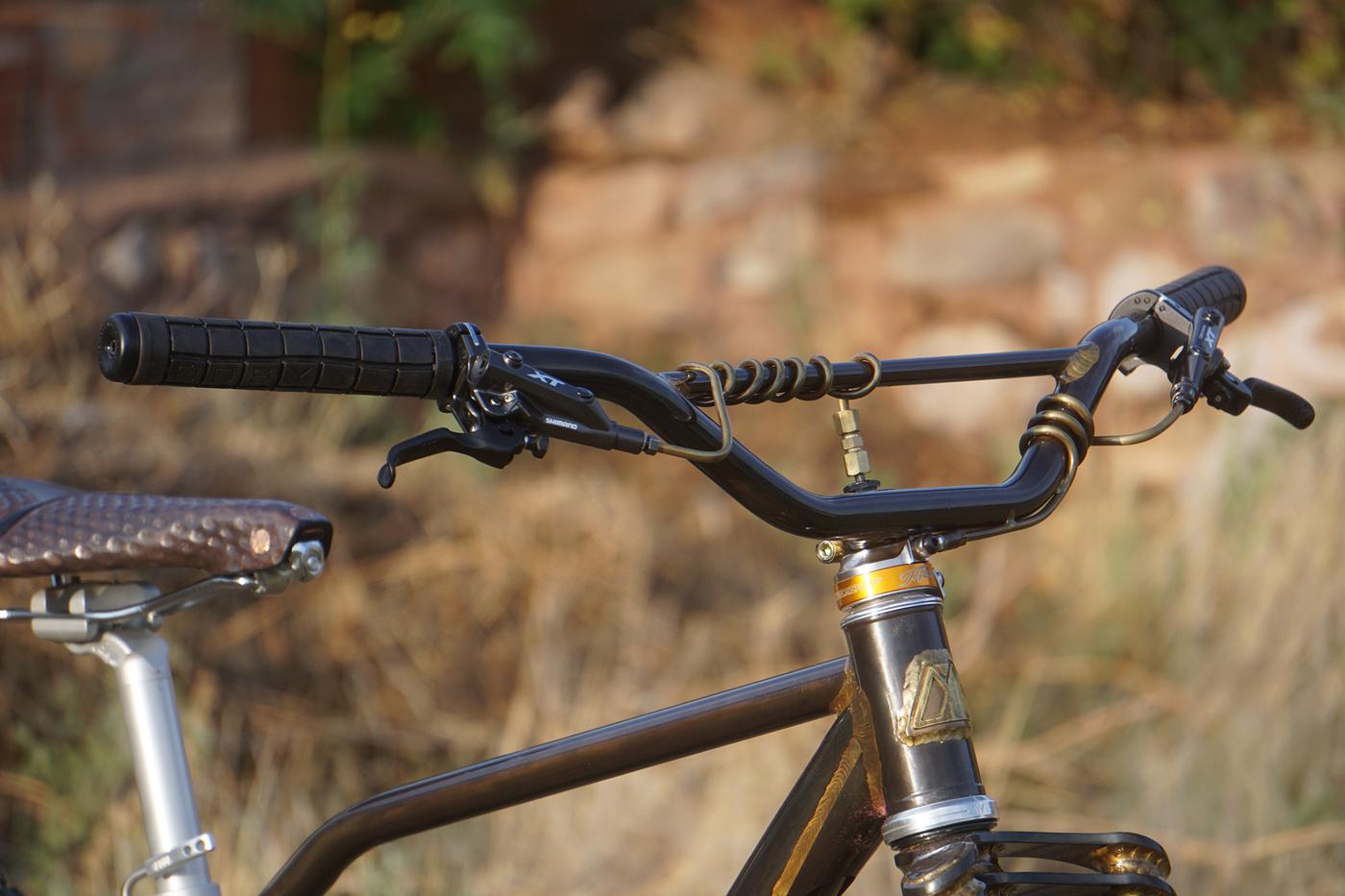 Now to put them on the bike. Not terribly difficult. Any plumper or jeweler would be up to the task, just a little heat and some silver to tack the lines to the frame. The main thing is to concentrate the heat on the frame so the steel comes up to temp at the same time the much less massive copper line does. Another consideration is how to slide the rear end for single speed tension. That’s where those neato coils come into play. In order for the telescoping chainstays to telescope, they can’t have a copper line spanning the gap from greater frame to rear caliper, which swings with the rear axle. The coil provides the travel required of the hard-line to accomplish this. Just repeated it for each of the brake levers so they could be adjusted as well. 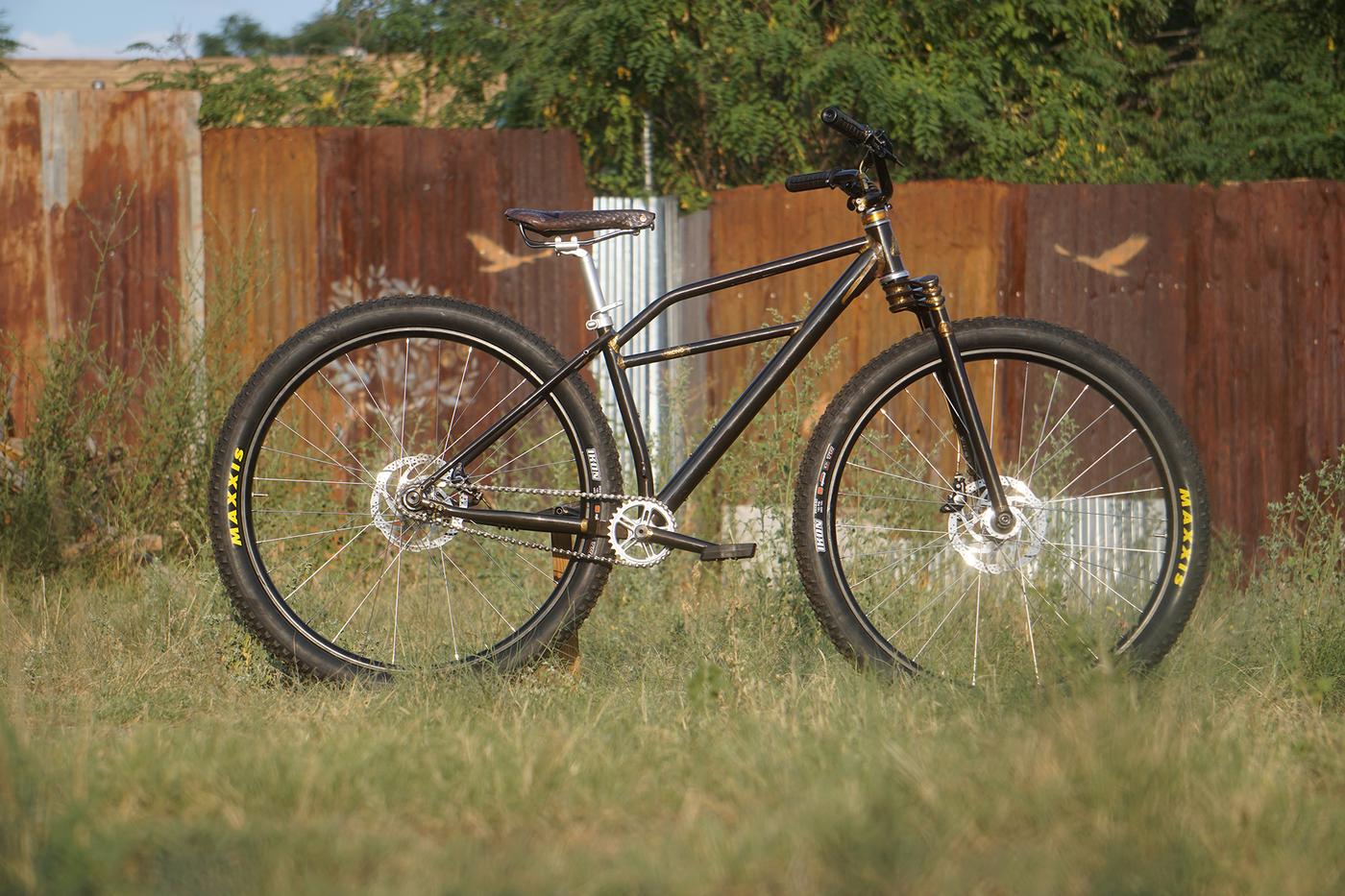 Anyway. If you’ve read this far, thanks for hanging in. Now you know as much as anyone would likely want to about copper hard lines on bikes. The last challenge will be to box this bad beaver without taking off the bars. I don’t want Mr. Tao to be in charge of bleeding them on arrival. If you have any questions or are so angry with the rest of your life during the pandemic that these stupid brake lines have pissed you off, please comment below. I’ll be happy to drop in and be as confrontational/informative as is appropriate.