If you’re reading this, there’s a high probability you’re into bikes. Being “into” bikes comes in all sorts of flavors: racers, tourers, shredders, gear heads, collectors, vanilla, chocolate, twist. However you identify, spending time and money building, fixing, riding, and re-building is all part of it. Exposure to the melange of personalization across the cycling continuum is a big part of what the Radavist does, in addition to sharing the passion and creativity of the people behind the bikes. People who are into it. People like Karl. Karl Artis is into bikes. Big time. While he spends a fair amount of time on carpentry, gardening, landscaping, cooking, and snuggling with his brood of dachshunds, he genuinely lives and breathes bikes. As a pillar of Arizona’s thriving single speed and bikepacking scenes, Karl has been obsessing over bikes for a long, long time. He is constantly marrying parts from his overflowing bins and putting together truly unique builds. Need to know what Campy brifter can shift a 7-speed simplex derailleur? Just call Karl.

A couple of years ago, Karl took his penchant for parts bin builds and started a project he now refers to as “Bikes for Buddies.” What began as an outlet for him to play around with interesting franken-bike concoctions and pay it forward to friends or others in need of reliable transportation has turned into a full-blown grassroots donation-based venture. It seems like every month he’s talking about another bike he’s working on for someone. You would think that his garage shop would eventually clear out with all of the projects he completes, but his collection just seems to grow. One of his most memorable gifted bikes was to his buddy Raul in Costa Rica. This was a few years ago and he was traveling with his favorite bike up to that point, a belt-drive Raleigh XXIX. He had Raul take him to his local bike shop, introduce him to his mechanic, and get the bike a basic tune-up. When the work was done Karl asked Raul if he had space to store the bike at his house. Raul looked confused and asked if it was for storage between trips. Karl told him no, that the bike was staying with him, and Raul flipped out. More recently, Karl went on a  420 mile (give or take) cycle tour from Tucson to Las Cruces to raise money for Bikes for Buddies. This time his buddies were kids in Juarez, Mexico. He ended up with enough money to purchase and donate 50 youth bikes and helmets. Karl has also garnered the prestigious title of Monē Bikes #1 frame and parts finisher. Cjell Monē enlisted Karl a while back to help make his raw brazed frames sparkle (literally and figuratively). With a background in finish carpentry and acute attention to detail, Karl is the Yin to Cjell’s Yang. And his work keeps getting better and more refined – just look at that brushed diamond turbo fade at the end of the photo set! He’s the reason Cjell is able to continue inundating Instagram with bike after bike featuring raw and uncovered brazing. Without Karl, the frames are merely steel turds covered in burnt flux. 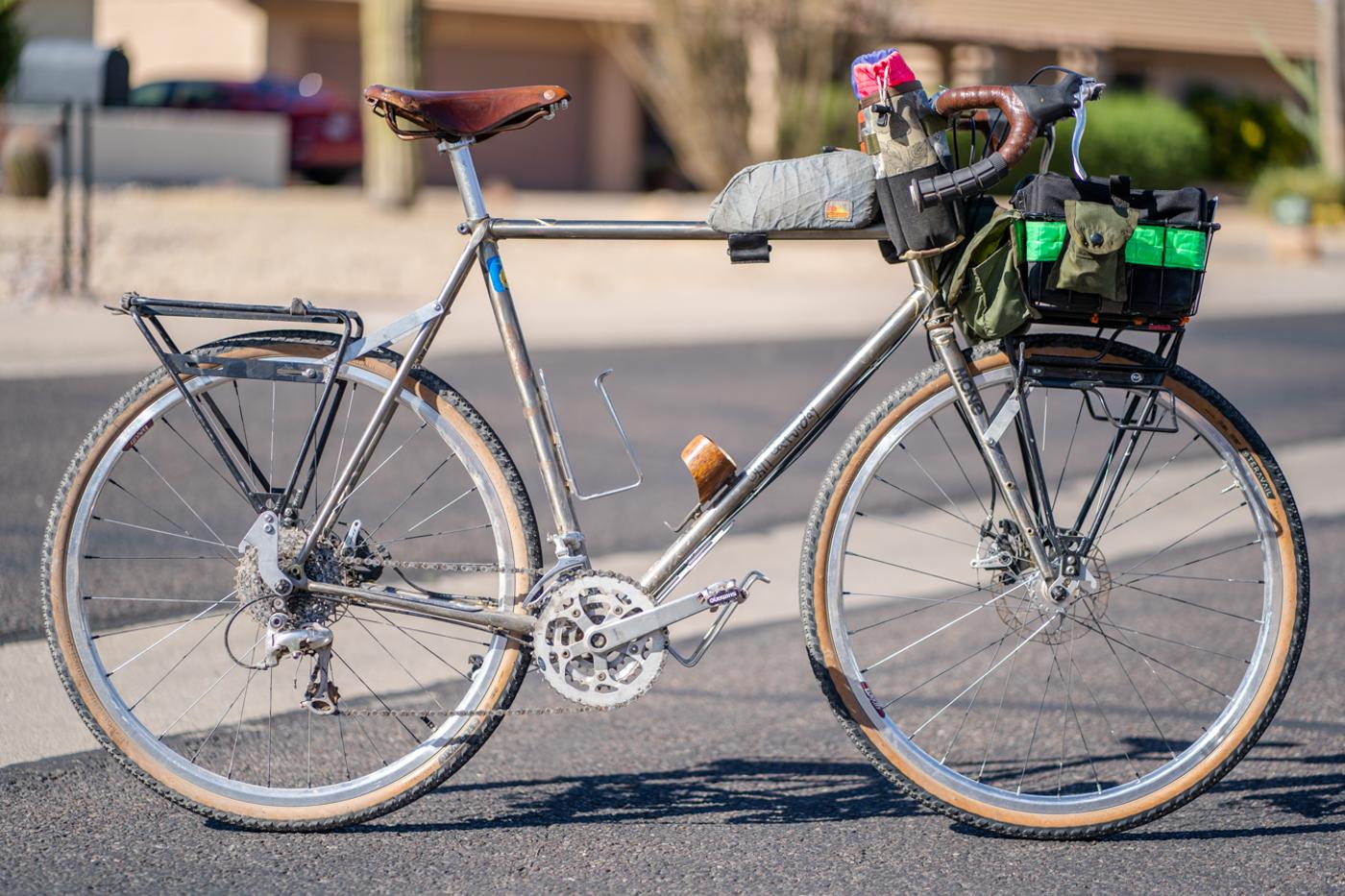 So what about the bikes that Karl doesn’t end up donating or sending back to Cjell? Well, they’re worth looking at and even drooling over. For touring duty, Karl has a very interesting 1986 Centurion. It’s been squished and disc tabbed to make a unique 650b x 40c road+ bike. It’s been fitted with a custom Monē 650b 1” threadless fork with mucho mounting options. It’s his take on a rando tourer and valiant effort to make an old bike work with his modern preferences. Karl finds himself in the unique position of having Cjell Monē (me, I’m actually writing most of this) of Monē Bikes braze disc tabs and quickly send a 1” threadless fork over. Normally an ornery butthole, Cjell is happy to send whatever Karl desires in exchange for a fair amount of finish work. In classic Karl fashion, it’s got a friction shifting mashup (Ultegra/White Ind/Gevenalle) 3x drivetrain that looks right at home on the neoclassical rando machine. Hidden in there is also a titanium White Industries bottom bracket. Why titanium you ask? Ha! I didn’t have to ask either. 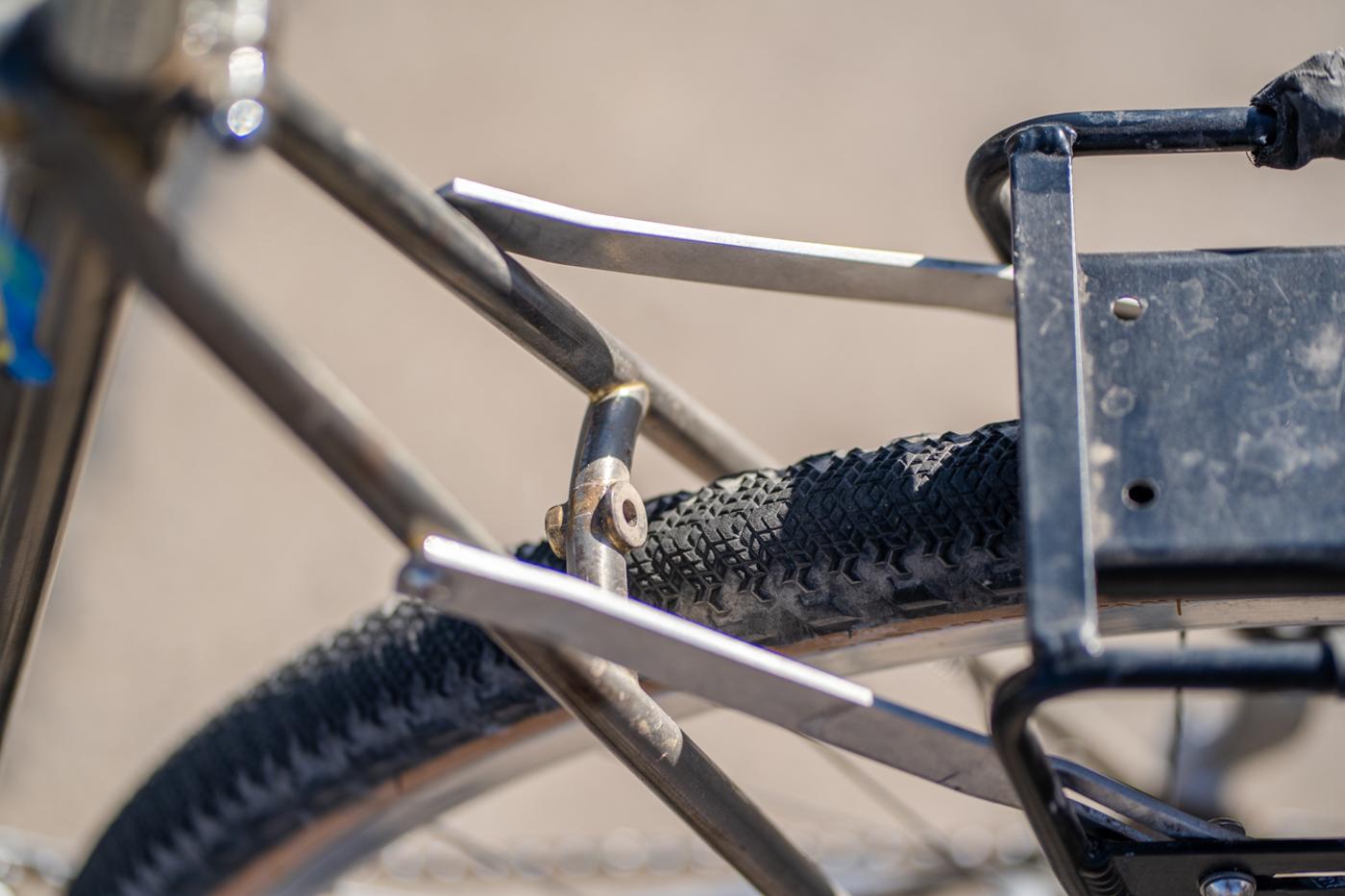 Other accouterments that uninterested parties might not notice are the Spur Cycles bell, Old Man Mountain rack, State Bicycle Co bar ends always filled with fresh lettuce, big copper rivets on the Brooks saddle (which shout “I’m into it!) annnndddd, oooh la la, the Andromeda Woodworks rosewood top cap. Karl etched “Still Saturday” on the downtube to match a tattoo on his right arm. It’s a mantra shared by him and his circle of bike friends who live their lives like a perpetual weekend. The thoughtful mix of details distilled down into a reimagining of a 1980s road bike make this like nothing you’ll find on www.bigbox.bikes.usa.com. 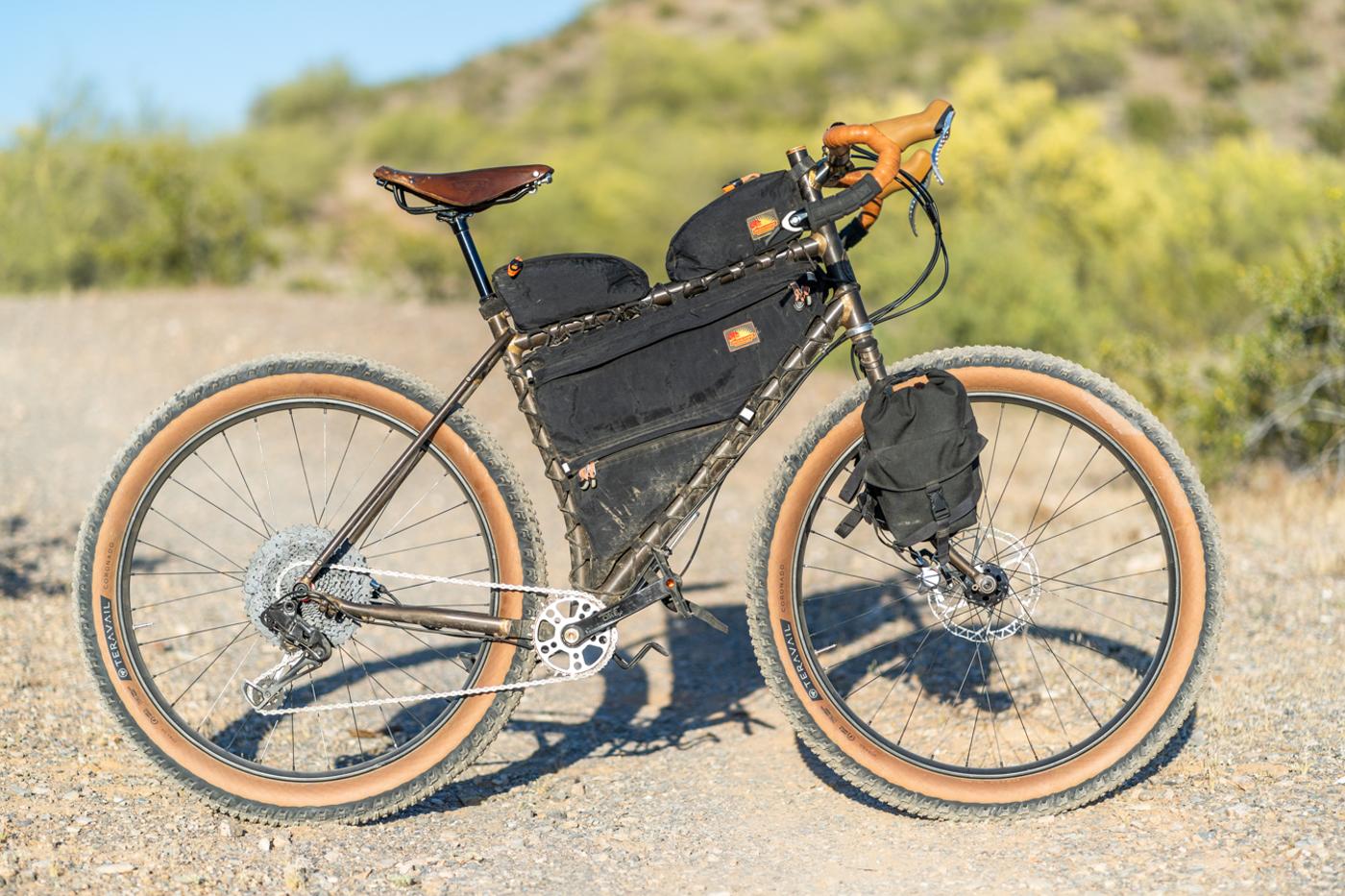 Switching gears (how many times has that transition been used here on the site?) to Karl’s latest pride and joy is the culmination of countless late nights spent polishing and painting Cjell’s frames. He finally earned the privilege of purchasing an El Continente for himself and it’s the realization of his vision for the ultimate dirt drop bike. Both Cjell and Karl are into dirt drop bars and can spend hours discussing the nuances of the various offerings that have flooded the market recently (prototype Monē drops on the Centurion, BTW). They both understand the historical origins of the dirt drop and proper ways to set them up.

Karl’s El Continente features a Curve Walmer 650 bar that’s positioned so he can do a majority of his riding in the drop without fatigue. He’s running wide plus rims laced to White Industries hubs and wrapped in Teravail 27.5×3 Coronado tires. He also utilized the internal dropper routing on the El Continente to install a 100mm dropper for all the biggest jump lines. 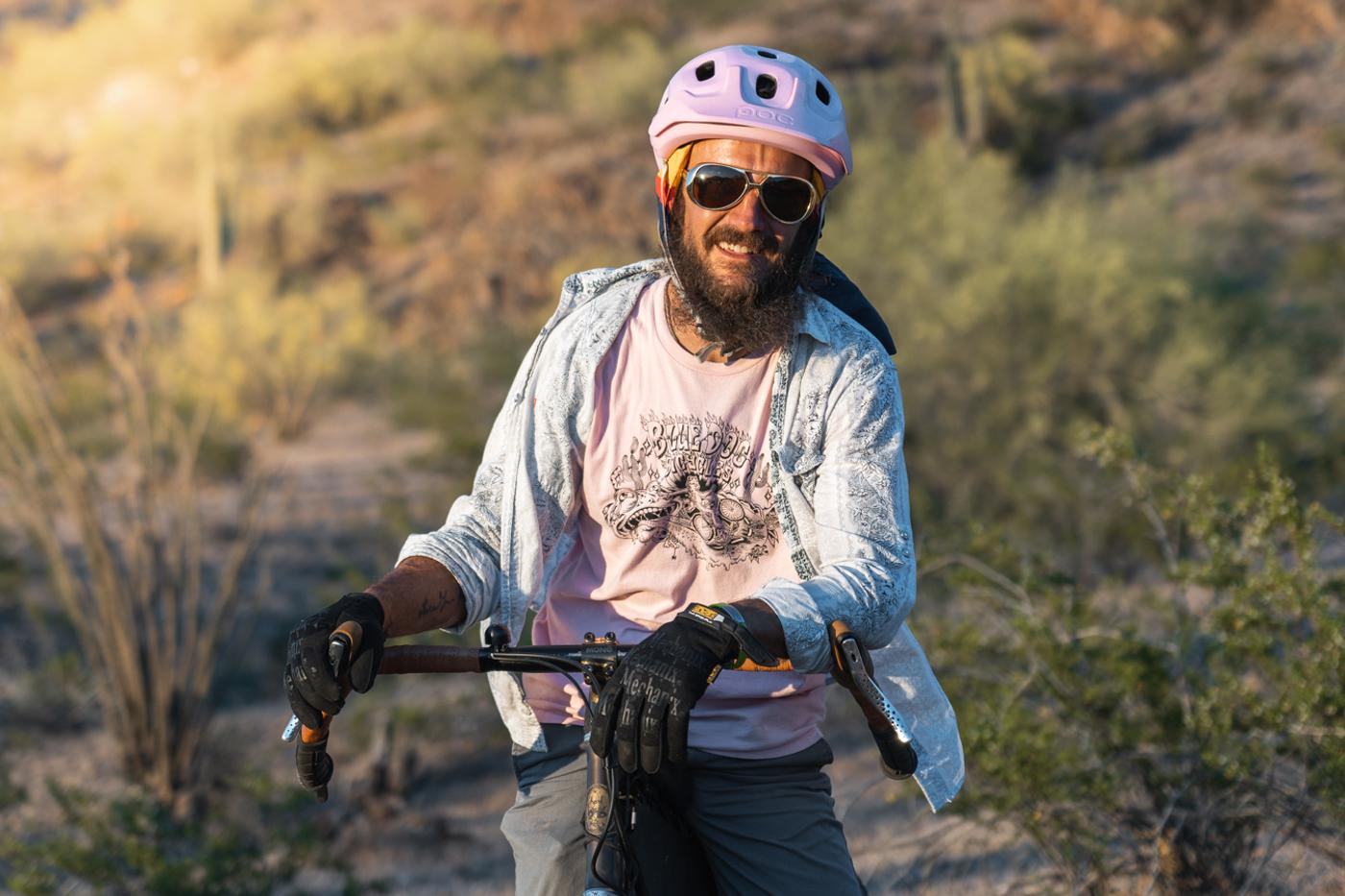 A Microshift bar-end shifter throws a Sram GX Eagle derailleur. That’s about as conventional as drivetrains get for Karl. The bar end shifter allows the use of TRP’s hydraulic Hylex brakes for more than enough stopping power. Karl, of course, did the finish on the bike that – in the world of Monē Bikes – is referred to as “Turbo Midnight.” You can see some of Karl’s custom touches etched on the stem which is capped by another custom marblewood top cap from Andromeda. 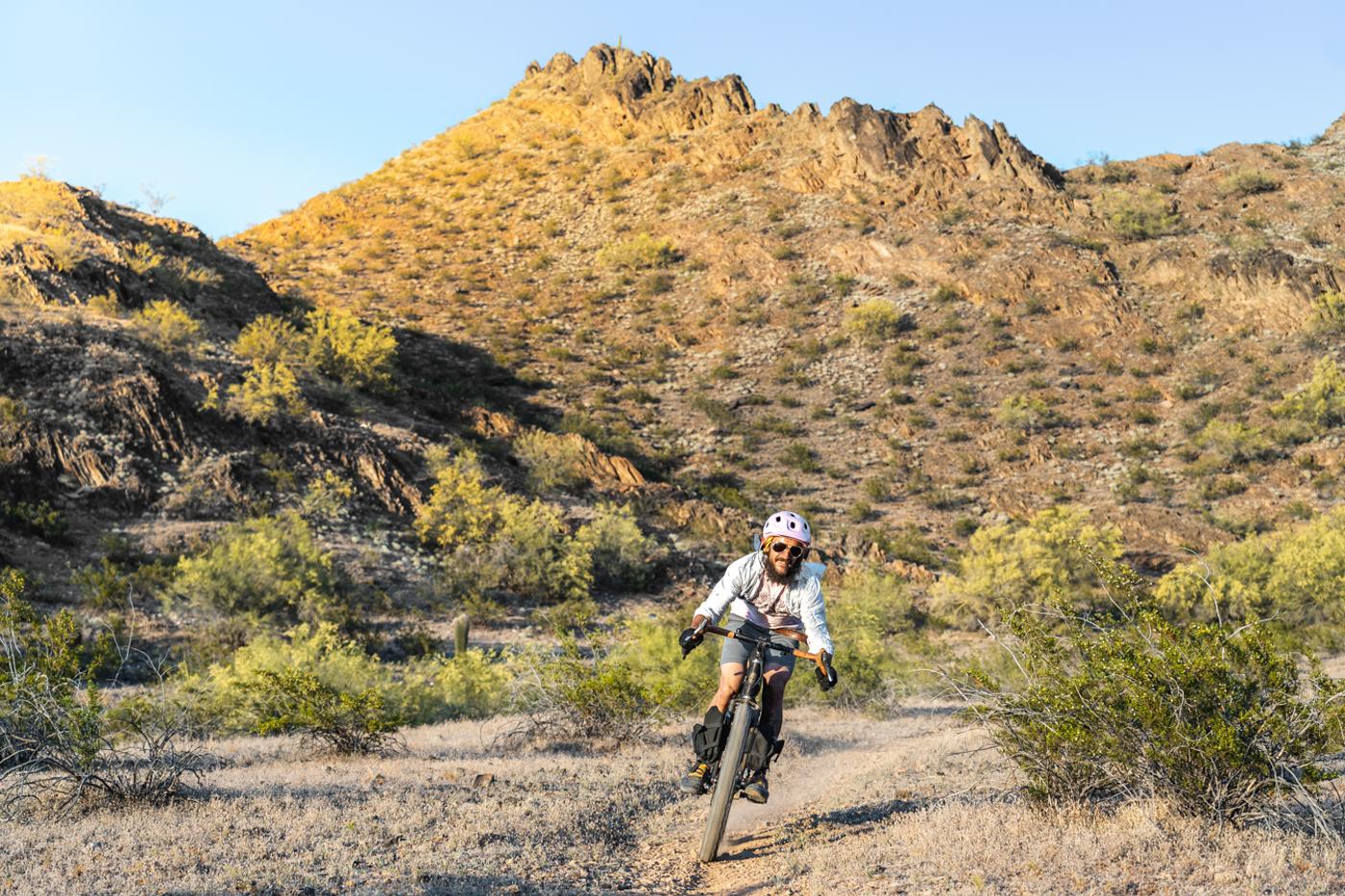 The luggage comes from Big Dave of Nuclear Sunrise Stitchworks and the Pico Panniers are by Kyle at Outer Shell. Karl tells us the setup, as pictured, is good for 14 beers and a light bivy, which sounds like a complete bikepacking setup. If I missed anything, it was made by White Industries… which is a small company in California you may have heard of that specialize in components specifically designed for people who are “into it.” 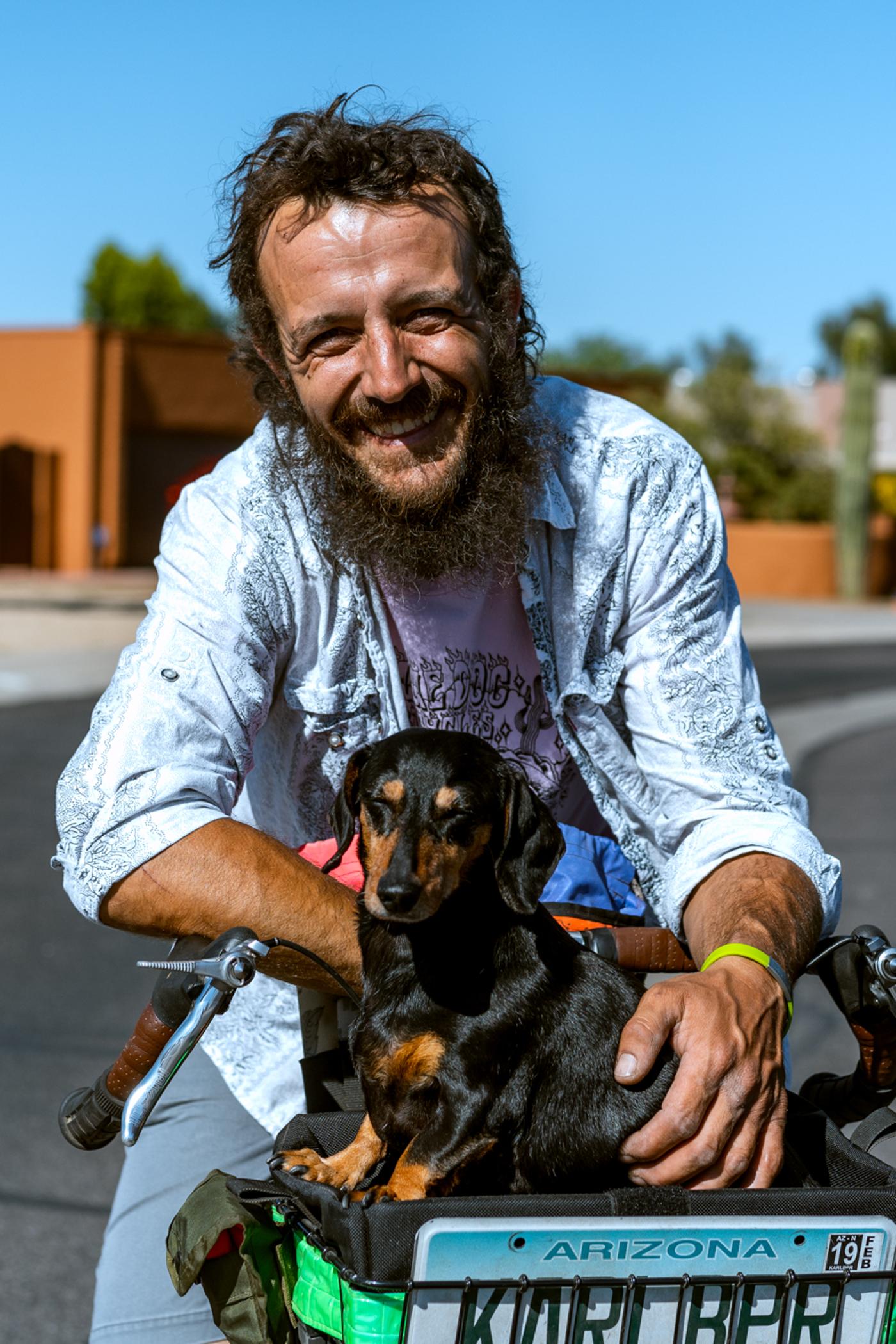 Maybe you know someone who’s really into bikes. Maybe you’re that person. Take comfort in knowing that out there, there are lots of people like Karl who are just like you. Elevating your machine is a worthwhile pursuit. And maybe it’s even better to put the work in for someone else. Seeing the effort and pride that goes into bikes like Karl’s are a testament that constant tinkering can enrich your life like it has for him.