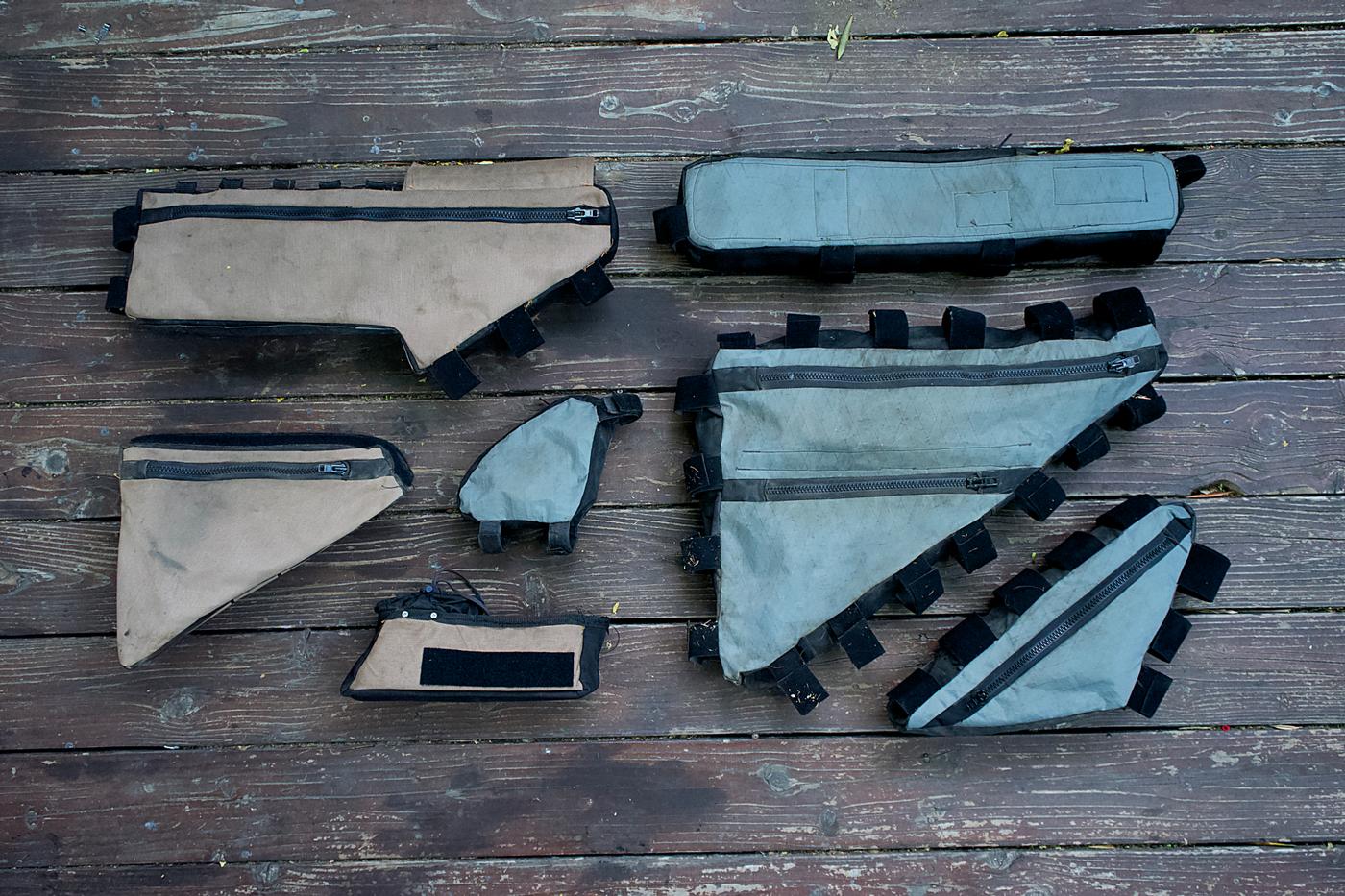 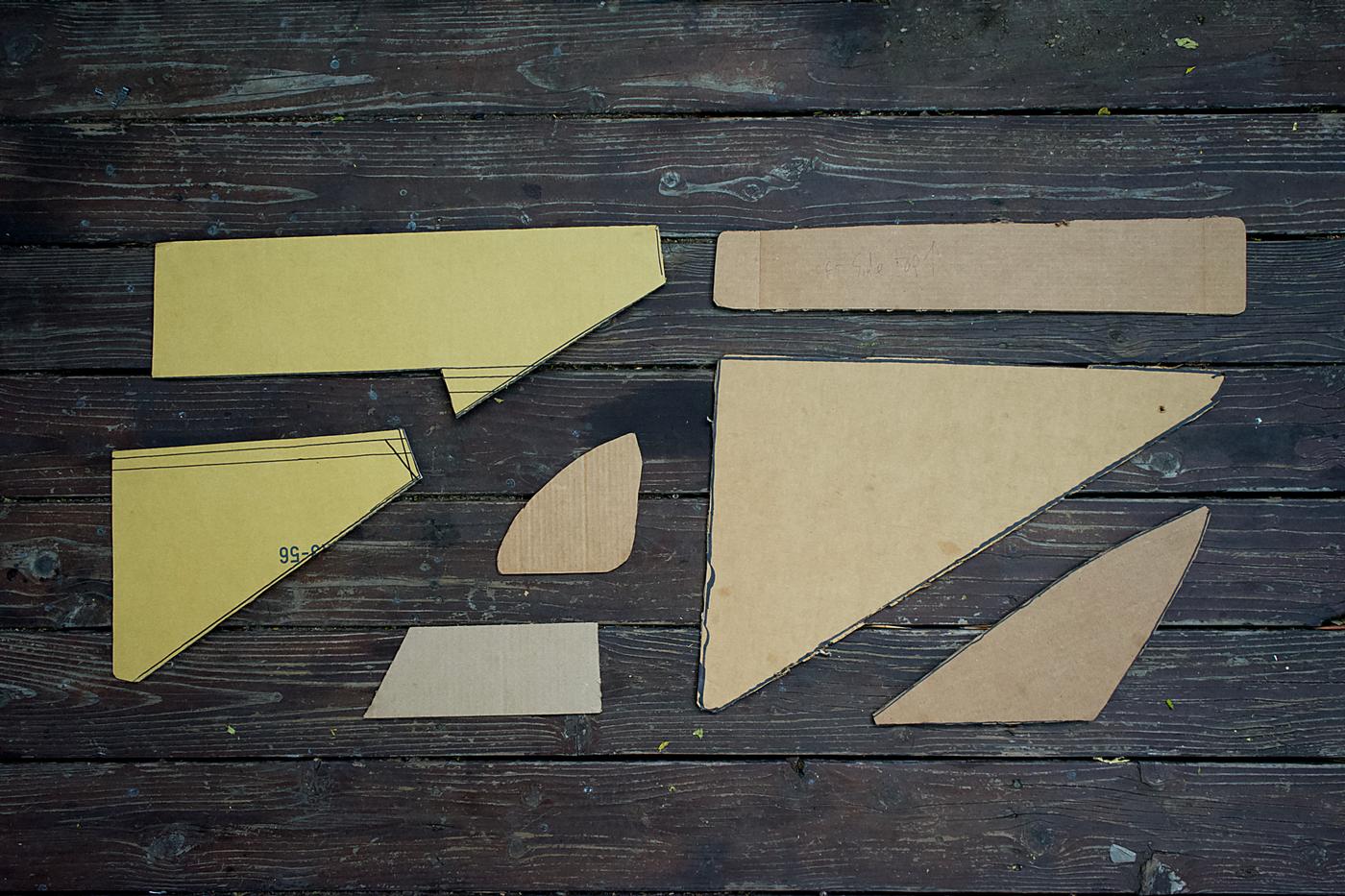 That’s why we won’t bother publishing a frame-bag how-to. Youtube is still there, so if you’re considering dropping the needle, that should be your first stop. All the methods and techniques you’ll need to understand are explained in detail by people who’ve been doing this far longer than I have. I couldn’t have made these bags without them. But even after watching so many sewing videos that my feed turned paisley, I still learned a few things in the doing that I wished I knew before I started. Those are the things I’ll be covering here. Professionally Made Bags are a Lot Nicer, But That’s Okay

I have a custom bag made by J-Packs on one of my mountain bikes, and the thing is a masterpiece. Your first pack(s) will not be. If you appreciate, say, the matching gold anodization between your hubs and your headset, or the stack-of-dimes weld around your bottom bracket, then you would really appreciate the craftsmanship of an established bagsmith. But if you go into making your own bag with realistic expectations around form and function, you’ll find the on-bike experience will be just fine. 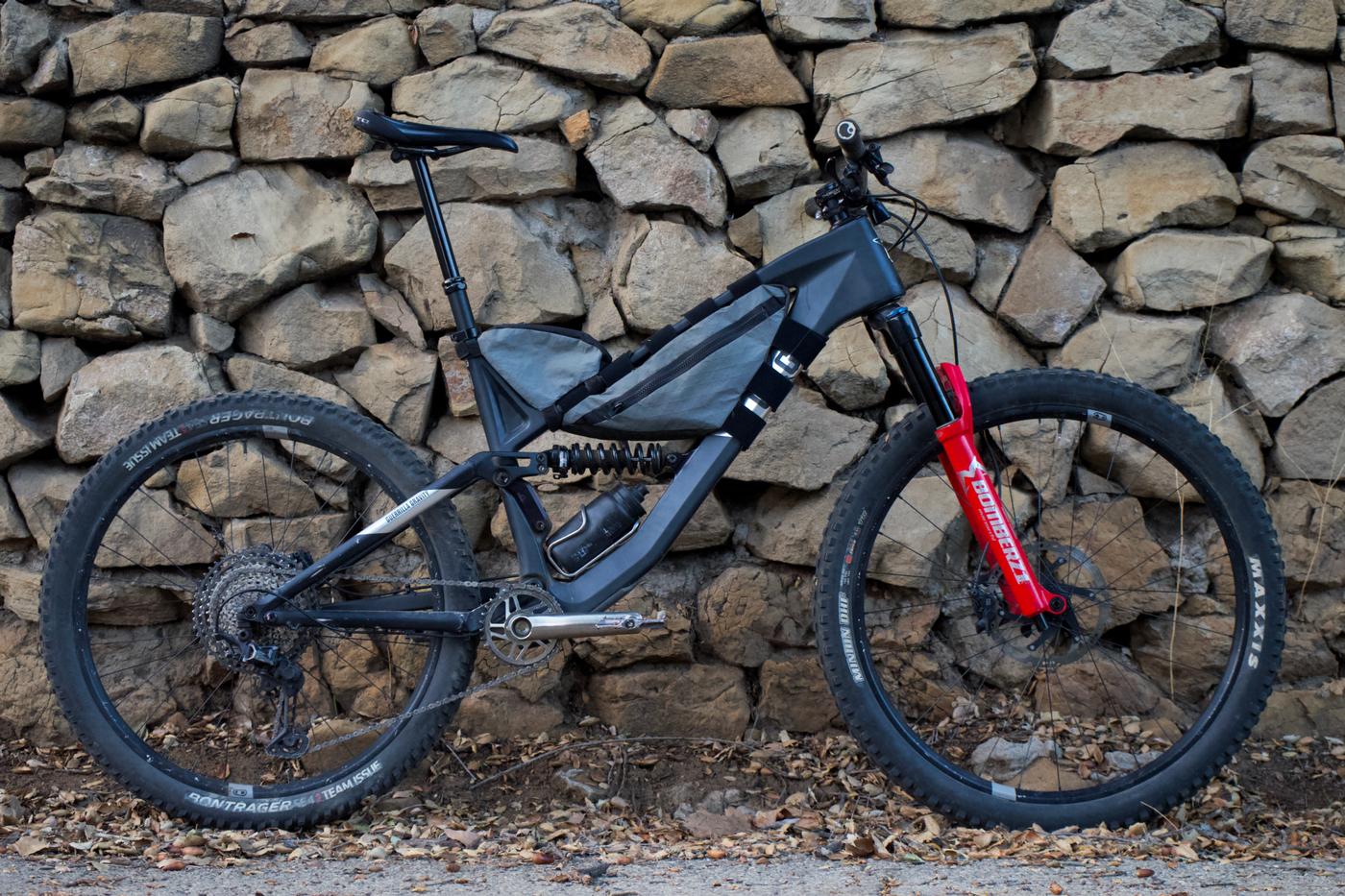 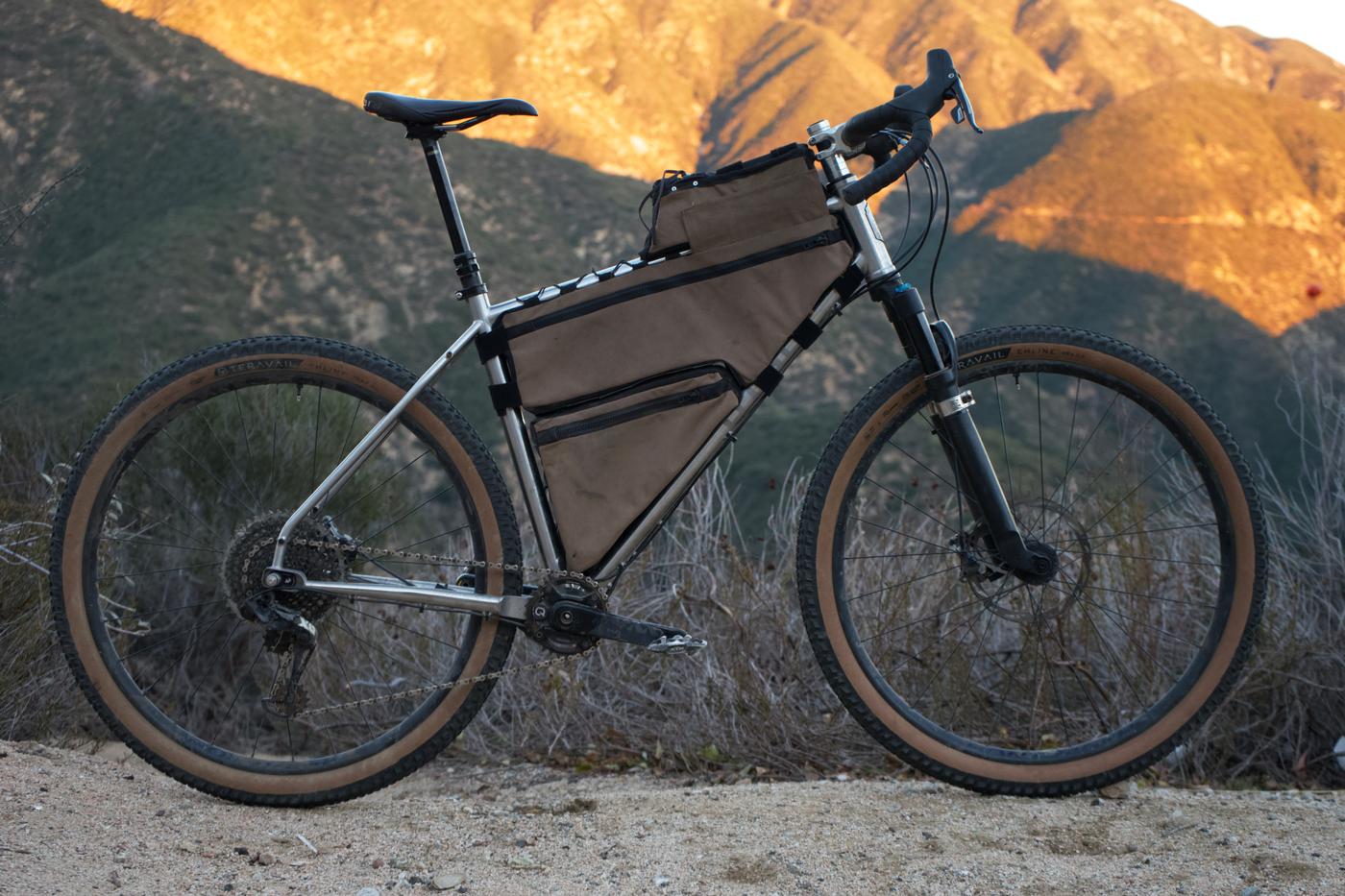 First, expect there to be a few wrinkles here and there. Sewing around sharp corners is a pain, and sometimes they will bunch up a bit. That’s one reason why, no matter how well you measure your panels, it’s hard to end up with a bag with perfect geometric fidelity. But a slightly skewed bag will still hold stuff. And once the bag is right-side-out and inside your triangle, imperfections are much harder to notice. It helps to not leave too much space between your mounting straps. Pulling the bag out evenly in all directions will leave it looking tight as a drum. 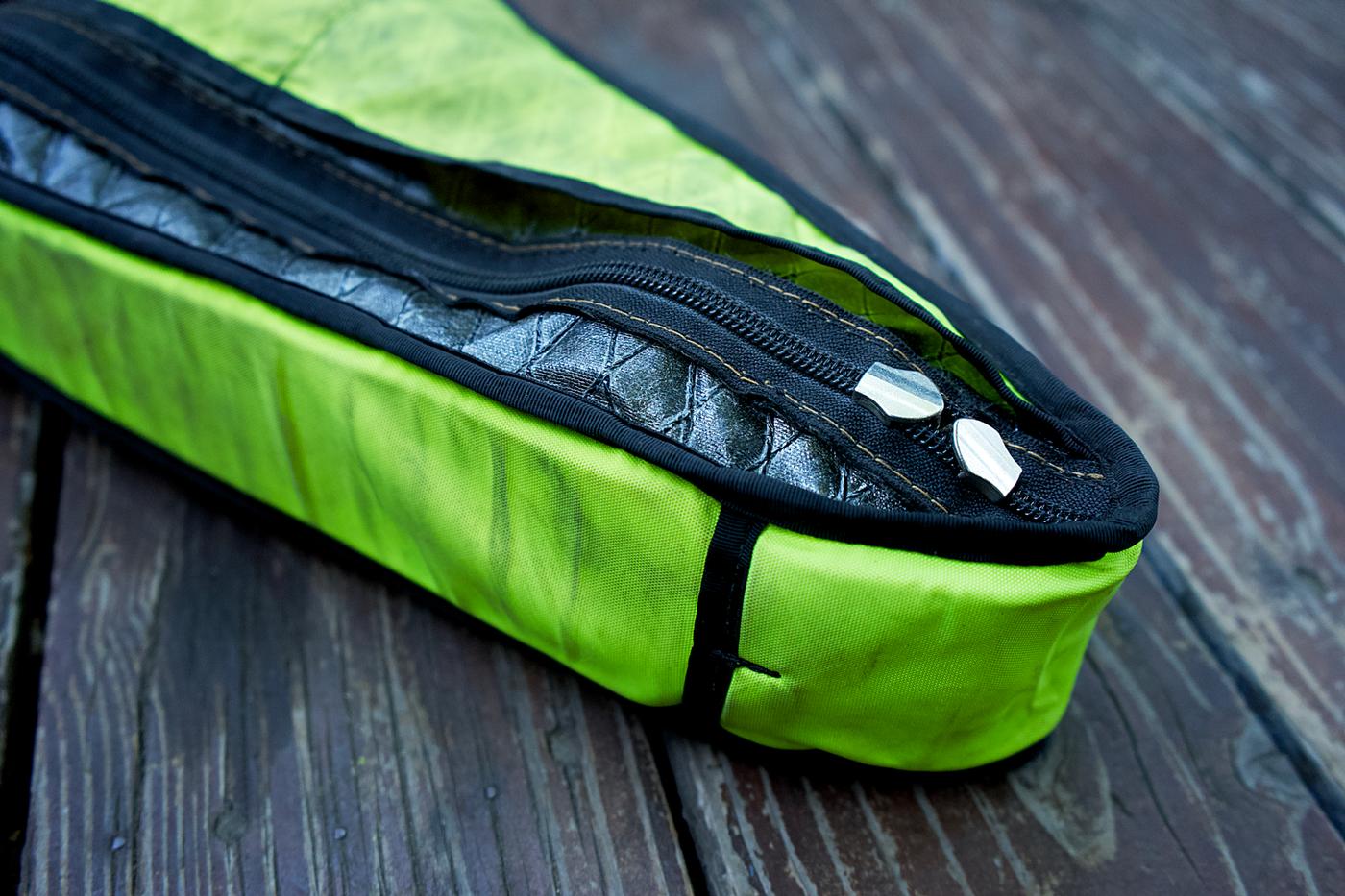 And don’t stress too much on waterproofing. Truly waterproof bags will often involve a special tape inserted between the seams, or extra steps after final assembly. Neither are easy to pull off for noobs like us. Anyway, if you’ve got sensitive gear like a down jacket or sleeping bag, you’ll probably be stowing it in saddle or handlebar bags that are better suited for holding dry sacks, or that are dry sacks themselves. 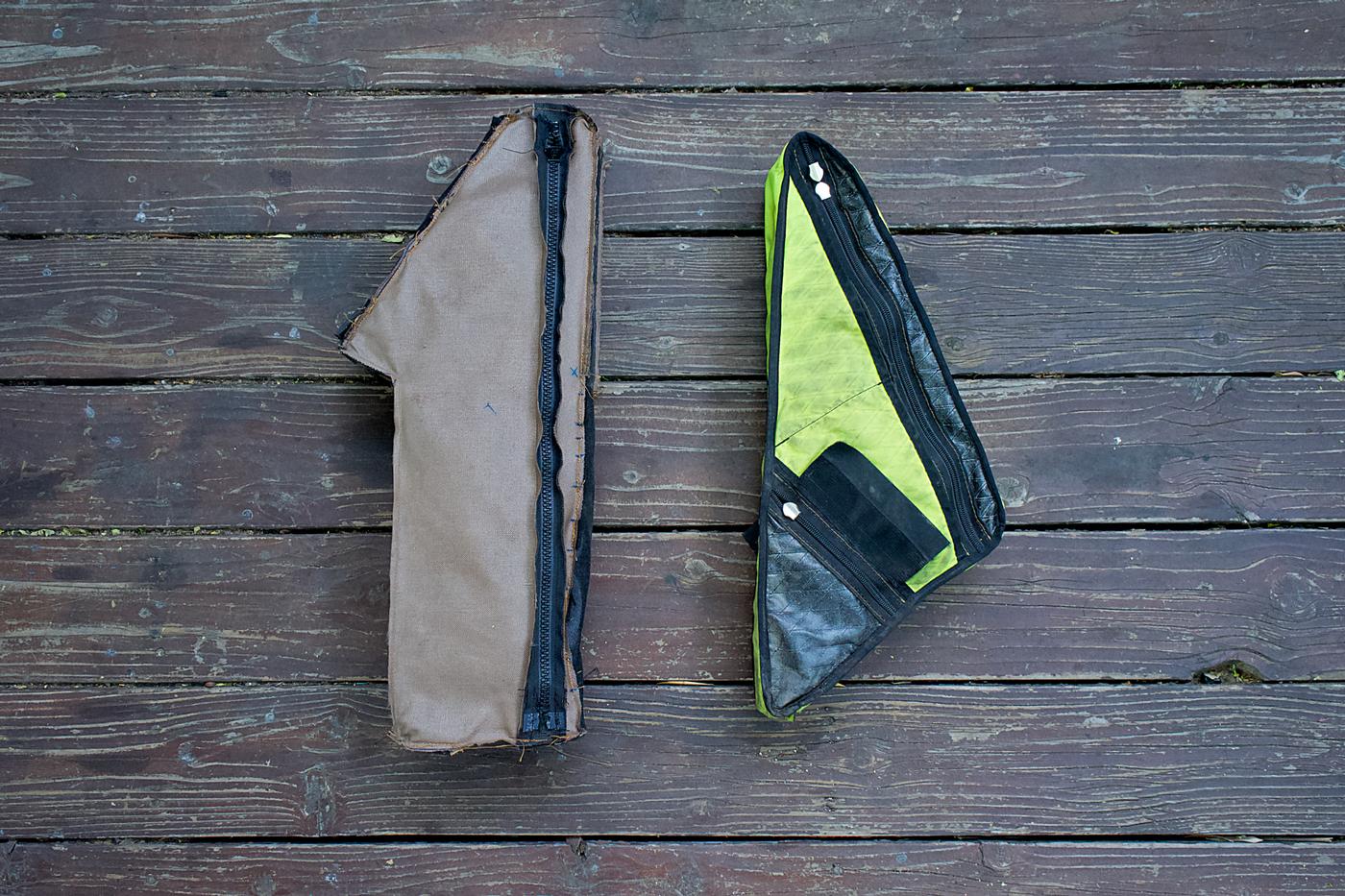 Finally, keep in mind that your first bag won’t be loaded with durability features, but you can trust it. Pro bags like my J Pack have fancy webbing sewed along all major seams called “binding,” and a bright yellow inner wall that not only makes it easier to find stuff, but also adds a layer of protection. It’s built like an army rucksack. But that ain’t easy. Working to that level sometimes requires special equipment, as well as a level of dexterity I just don’t have. Somehow, though, my simple, single-stitched bags are holding up just fine. A couple are nearly two years old, and a couple others have gone well over 2,000 miles. Still, I never go a single mile without a needle and thread in my essentials kit, just in case. 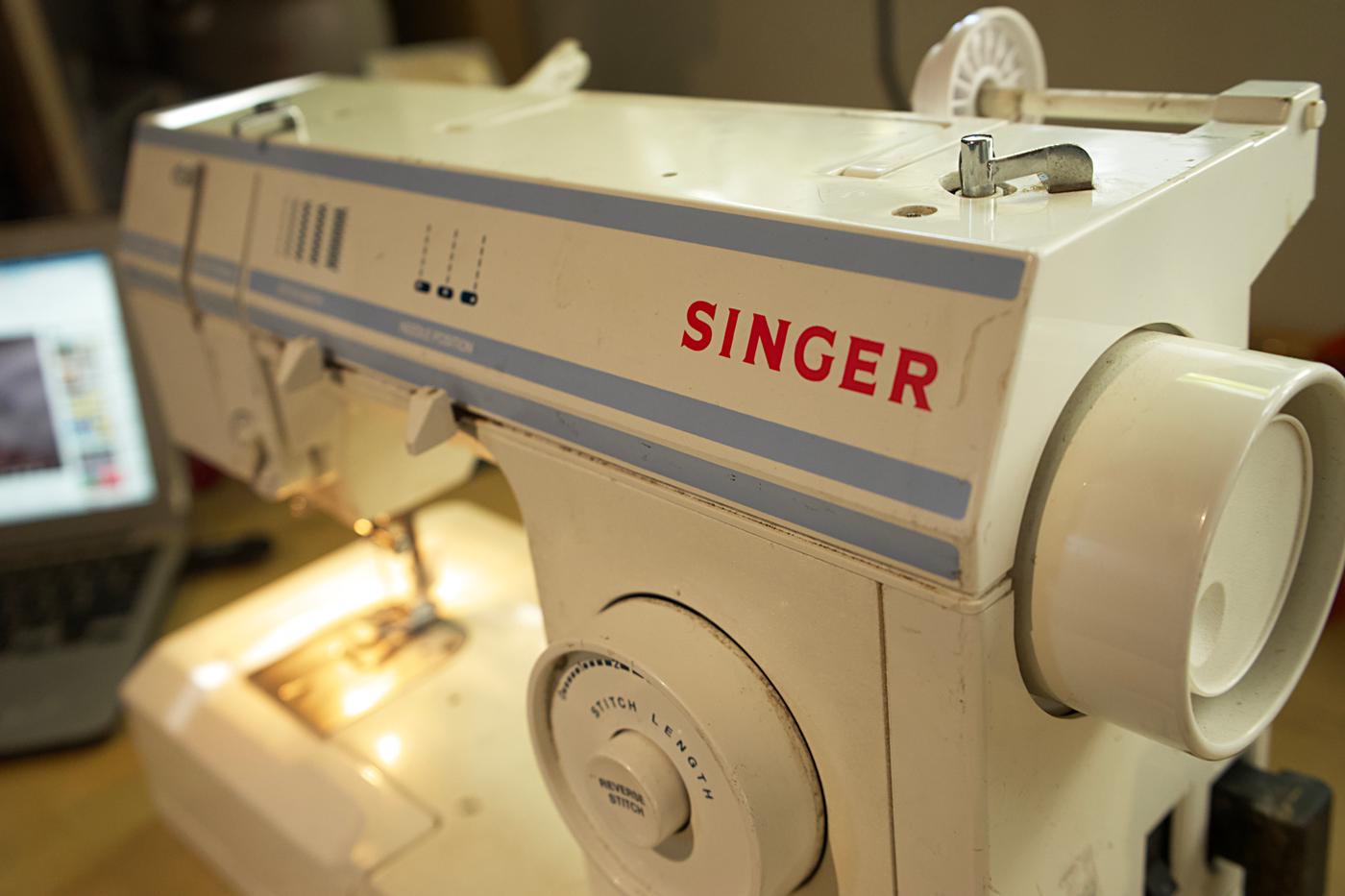 Most Home Sewing Machines Will do Just Fine

When I realized how many layers of dense, synthetic materials I’d have to repeatedly plunge a tiny needle through, I looked at my 15-year-old Singer 57815 C with a mix of pity and anxiety. Nowhere does it boast “Heavy Duty” or “Professional Grade,” and I’m seeing a pretty fresh-looking 57815 on Ebay for under $50. But soon after starting assembly, I went from sewing two layers of Cordura, to three layers, to three layers plus Velcro, to three layers plus Velcro plus 2mm of foam padding, and no problems arose. It complained a bit when I tried to sew through adhesive Velcro, but I learned that’s a no-no on any machine. The only upgrade I needed to make was a set of upholstery needles and a bit of a hack to accommodate an industrial-sized spool of thread. 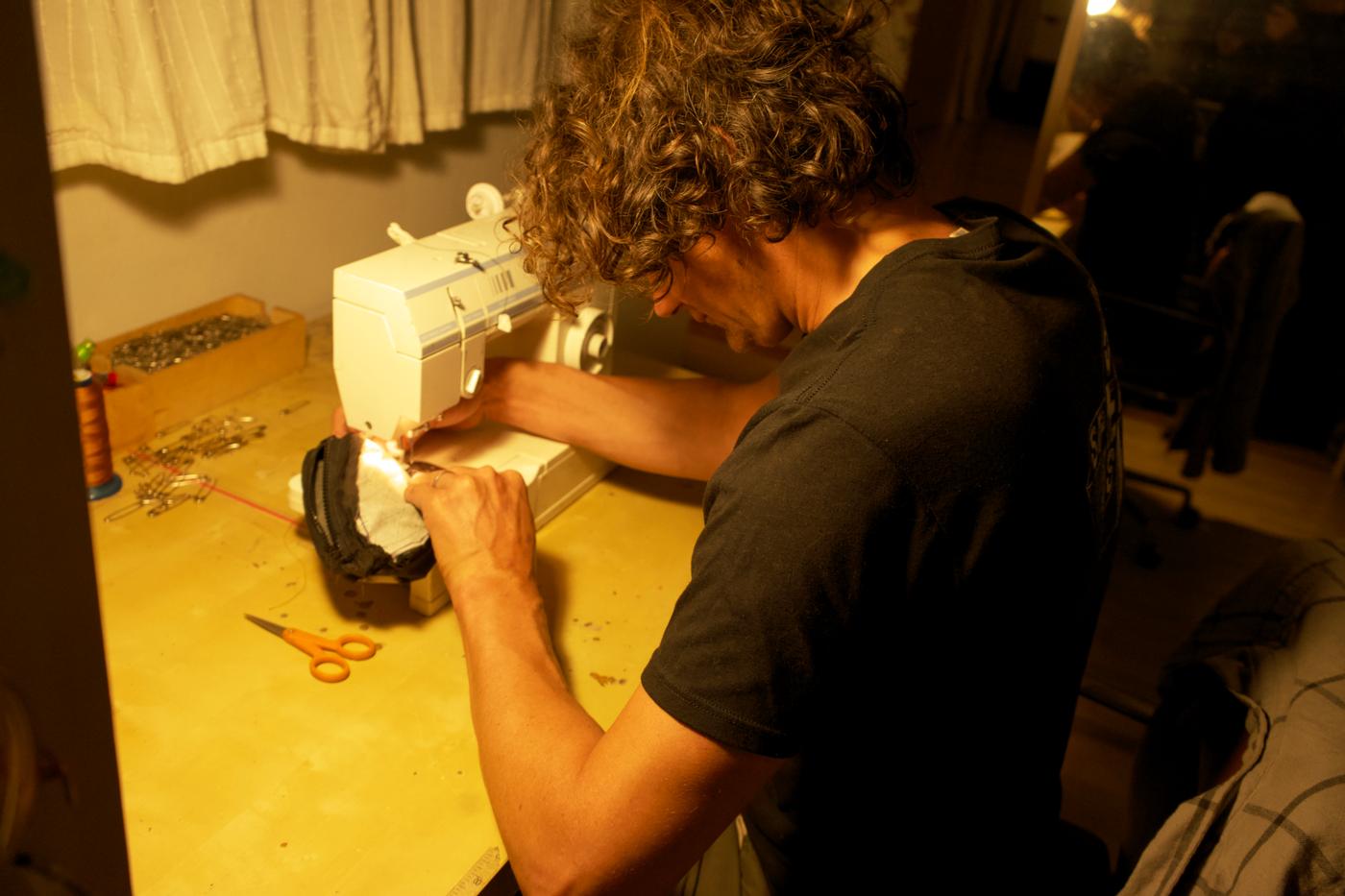 I’ve been told that even a hobbyist-level machine can manage this sort of load in ideal conditions, but things change when wrestling a bulky bag while you sew along a tight curve, or fight the fabric’s annoying tendency to pull itself out of line. As with bike components, a cheap sewing machine will actually work pretty well until you start to push it.

A brand new machine that does claim to be heavy duty will go for between $150 and $200. About the same price as a custom frame bag, so it’ll put you in the red if you’re doing this to save cash. But sewing machines are common staples in tool libraries, which are usually at normal libraries. Go check one out. If it’s heavy, it’ll probably do the trick. 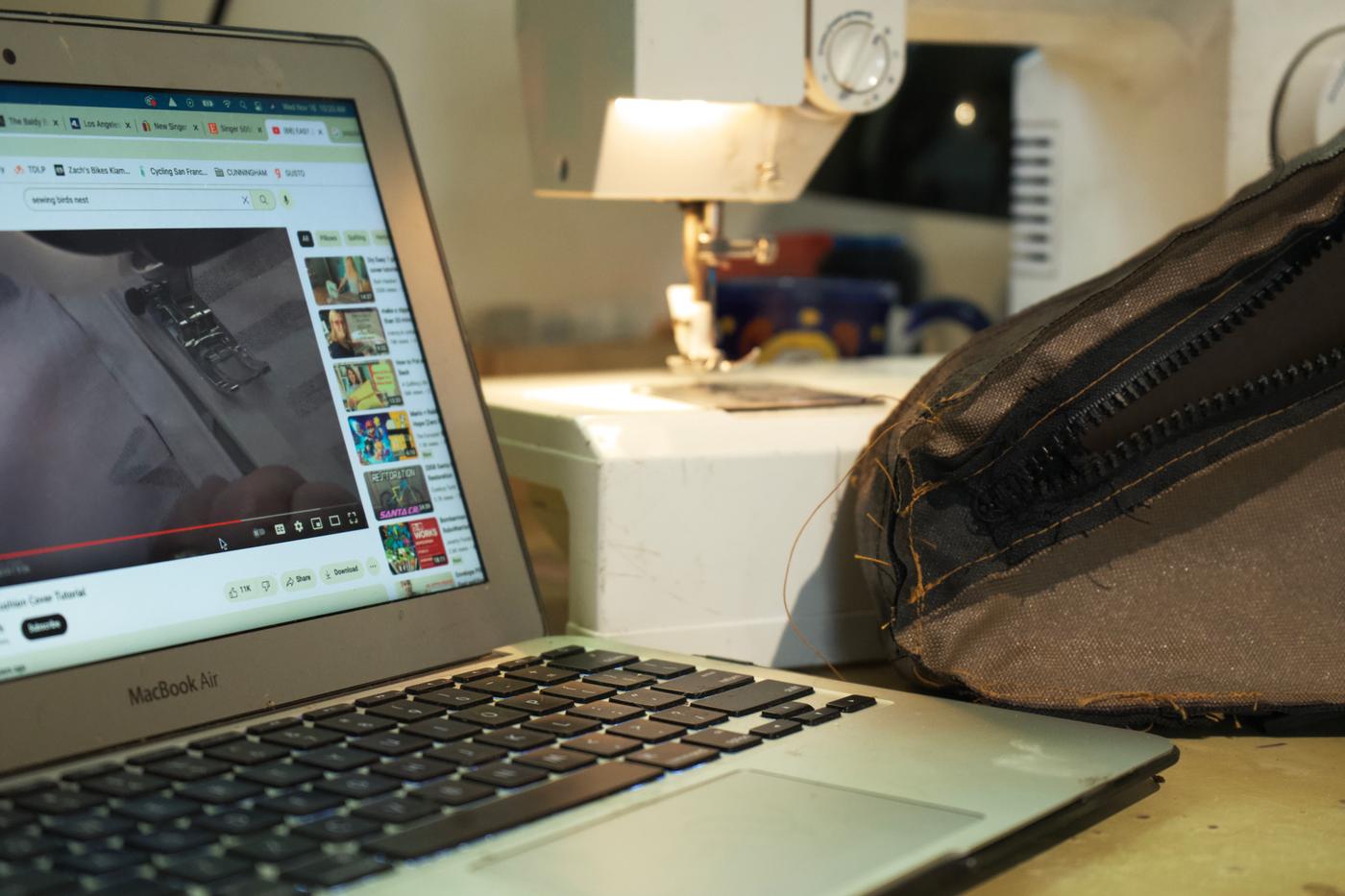 But not just a little of it. A lot of it. There’s no single right way to do any of the many steps involved in making a frame bag, so the more approaches you see, the better you’ll be able to pick which is right for you. Start with some obvious bike-specific tutorials, but you’ll quickly find they don’t get very granular. It’s a bit like trying to learn Korean by watching Squid Game. You’ll pick up a few phrases, but probably not enough to navigate the subway. It’s easier to find info on things like assembling a zipper, accounting for seam allowance, and what the hell a seam allowance even is if you look within Youtube’s broader sewing circle.

Youtube is also the best place to go for troubleshooting. That’s where I learned my shortcut of adhesive Velcro was binding my needle and tearing my thread. It’s also where I learned how to hunt down the causes of birds’ nests. If you don’t know what birds’ nests are, you will. Oh, you will. 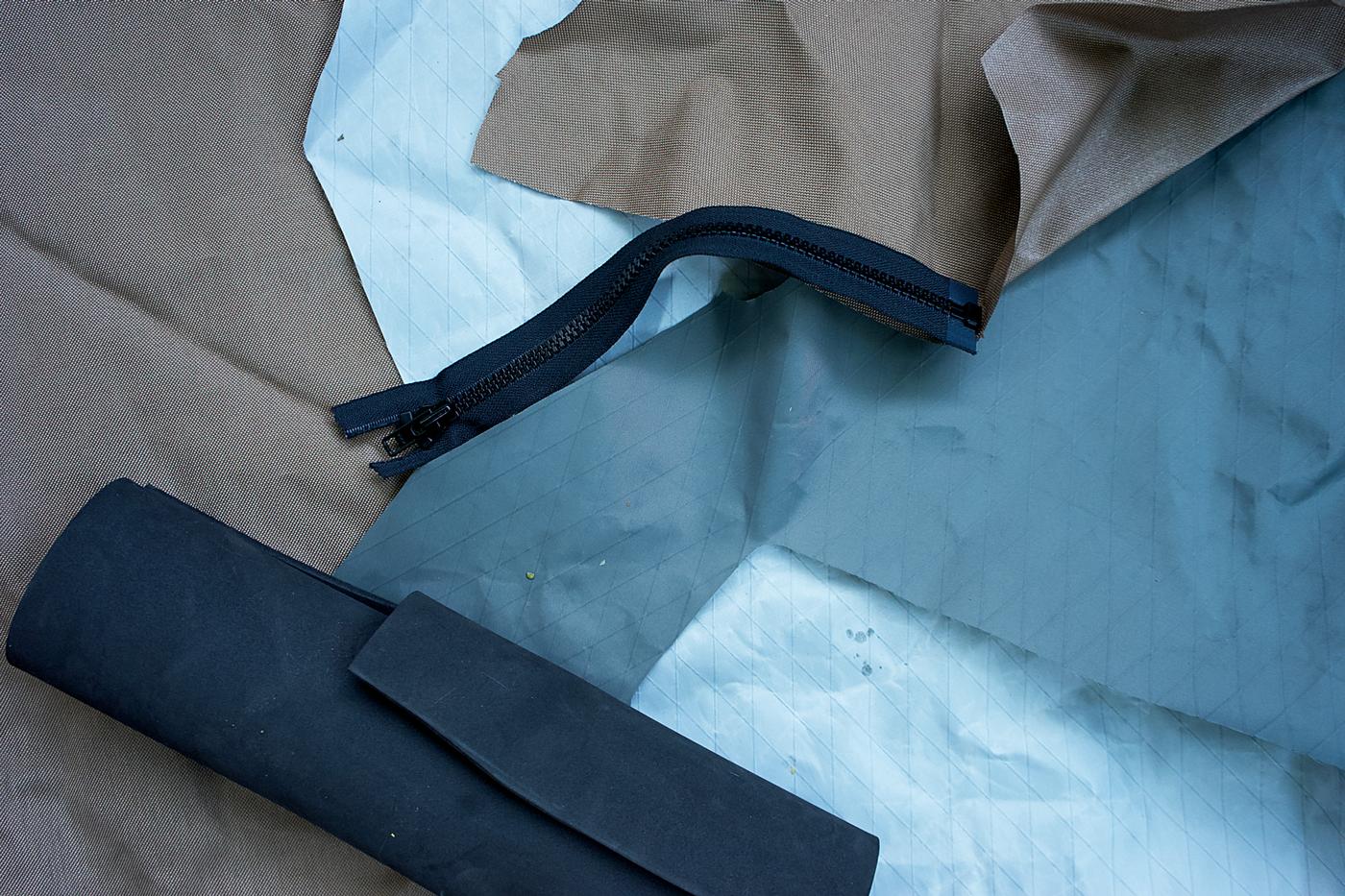 It’s surprising how much fabric one yard is, and I ordered two for my first project, since I wanted the sides to be one color and the edges to be another. Ten feet of Velcro and two feet of 4mm foam is also quite a lot, but that’s how it comes. You’ll probably end up with a lot of excess, so consider how best to make use of it. After all, these materials aren’t cheap. When paying retail for small quantities, you may spend a good percentage of what it would cost to order a single custom bag. Making one or two extra soothes that sting a bit.

In my case, after making a full-triangle bag for my bikepacking hardtail, I noticed the sizable void above the rear shock on my Guerrilla Gravity. Then, after making a second bag to fill that void, I realized that if I made a third bag, I wouldn’t have to swap my little flat-repair pouch between my two mountain bikes every time my mood went from trail to enduro or back.

And after all that, I still had enough material to make a massive single full top tube bag for my hardtail. Point is, even if you’re not going to jump into making your second or third bag right away, consider what they may be and keep it in mind when you’re buying your zippers and cutting out your panels. A little planning and a lot of Tetris could triple your yield. 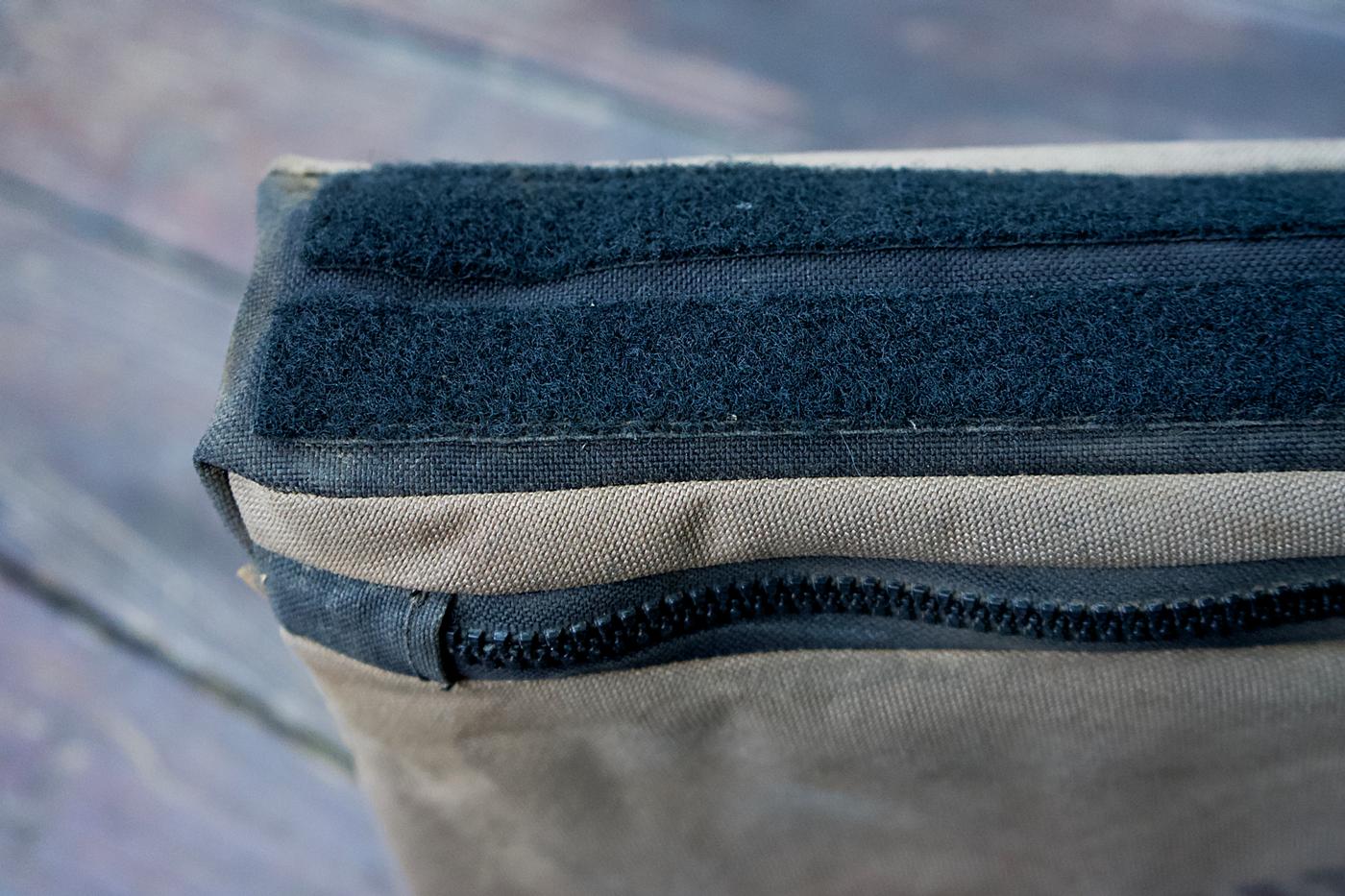 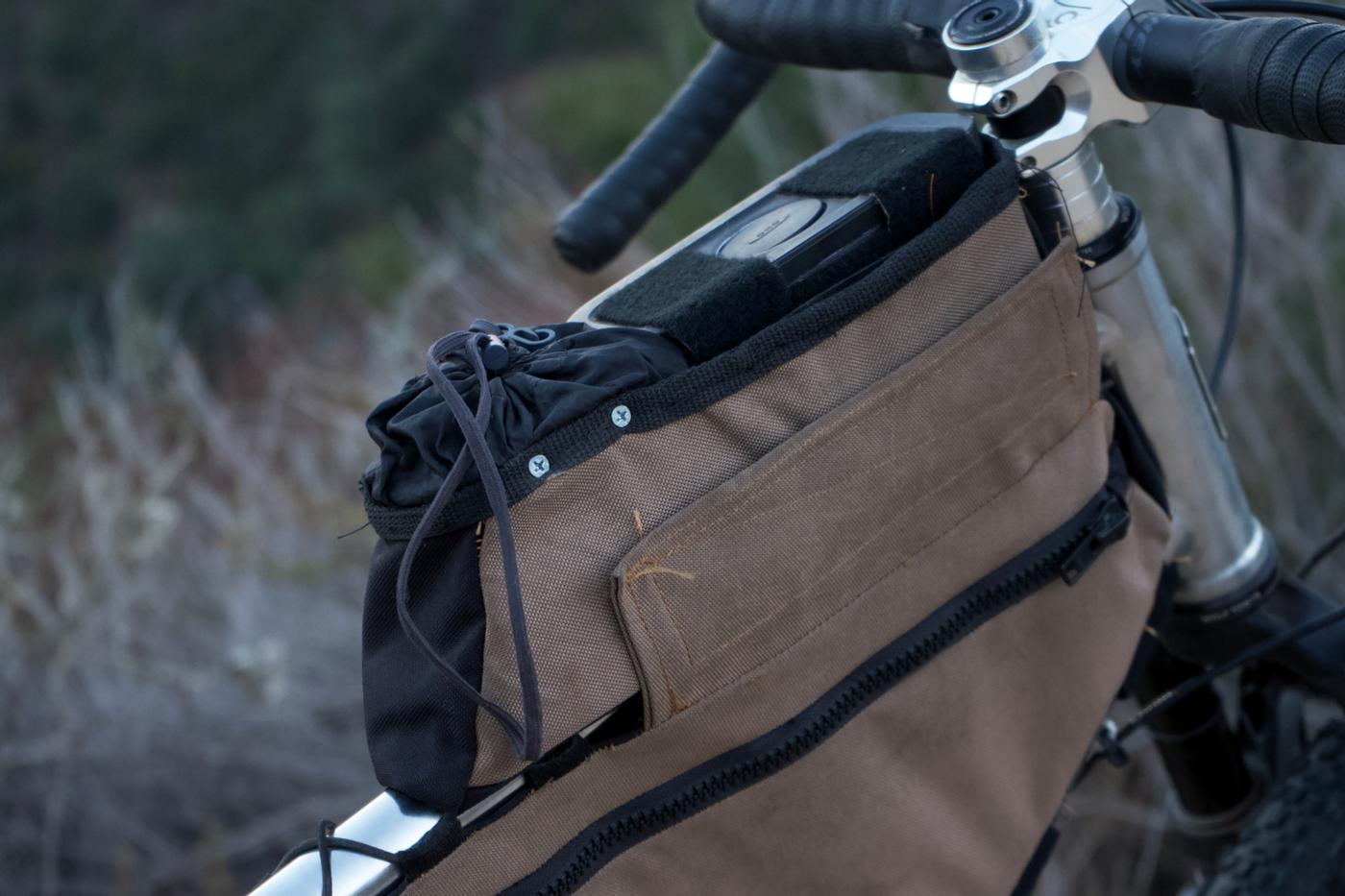 This advice doesn’t just apply to the preparation stage. While sewing my first bag, I made a few mistakes that I could have avoided had I stopped and considered where I’d be two or three steps later. Some of it was basic, like sewing my Velcro panels right-side-out. Other times, it involved some real puzzle-solving. For instance, sewing exterior pockets must happen before the pack is assembled, and giving those pockets a Velcro closure must happen before they themselves are assembled. This may seem like common sense, but keep in mind, you’ll be building the bag inside-out. It requires the sort of four-dimensional thinking that I haven’t had to exercise since I saw Interstellar. 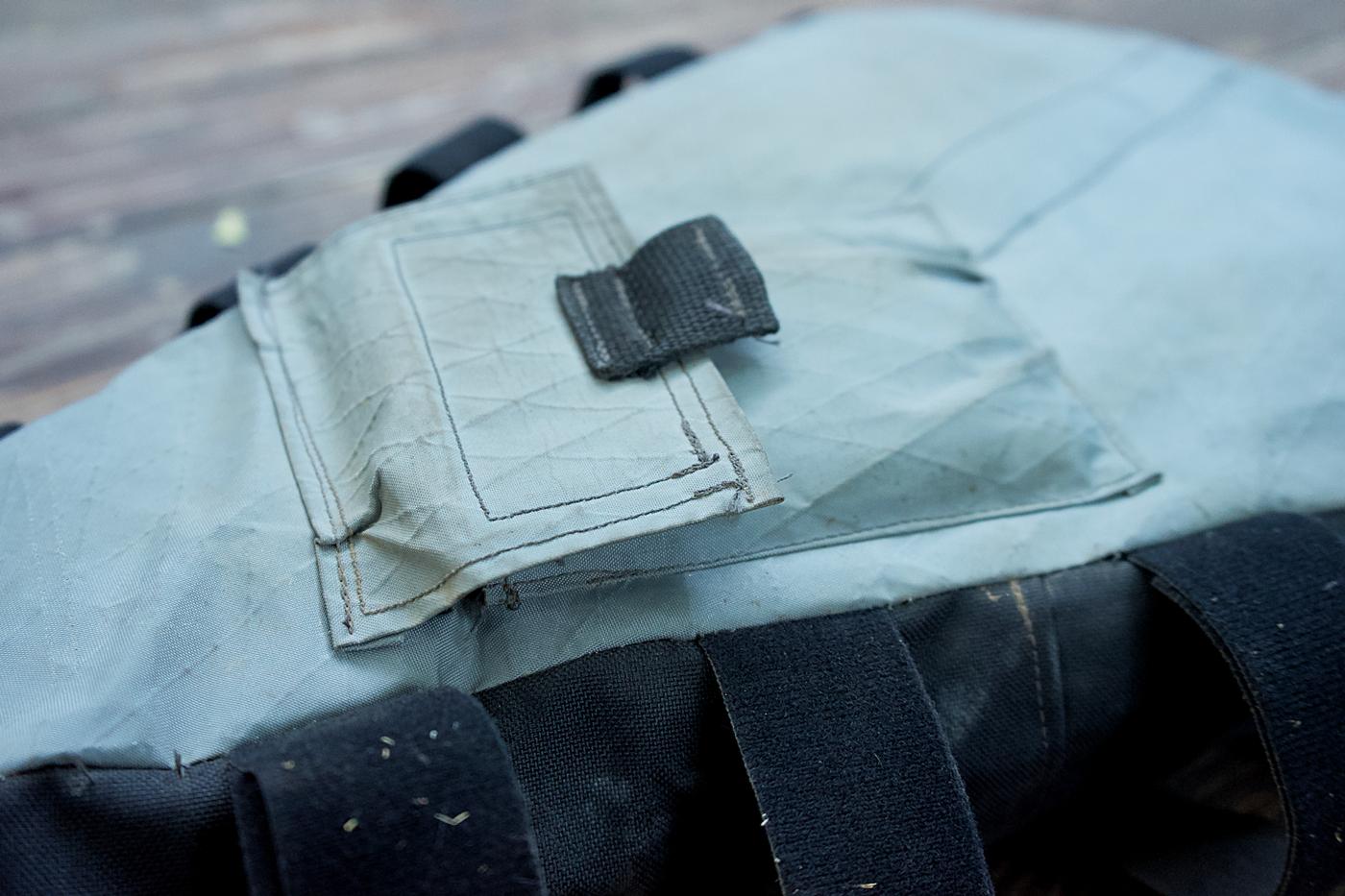 If Interstellar clicked for you the first time you saw it, maybe you’ll be fine. But I fumbled enough while making my first pack that, on my second, I took a minute to make a crude drawing and a list of steps. At worst, this is a way to organize your thoughts and make sure you’re not missing anything. At best, it’ll help keep you from having to fix your mistakes. 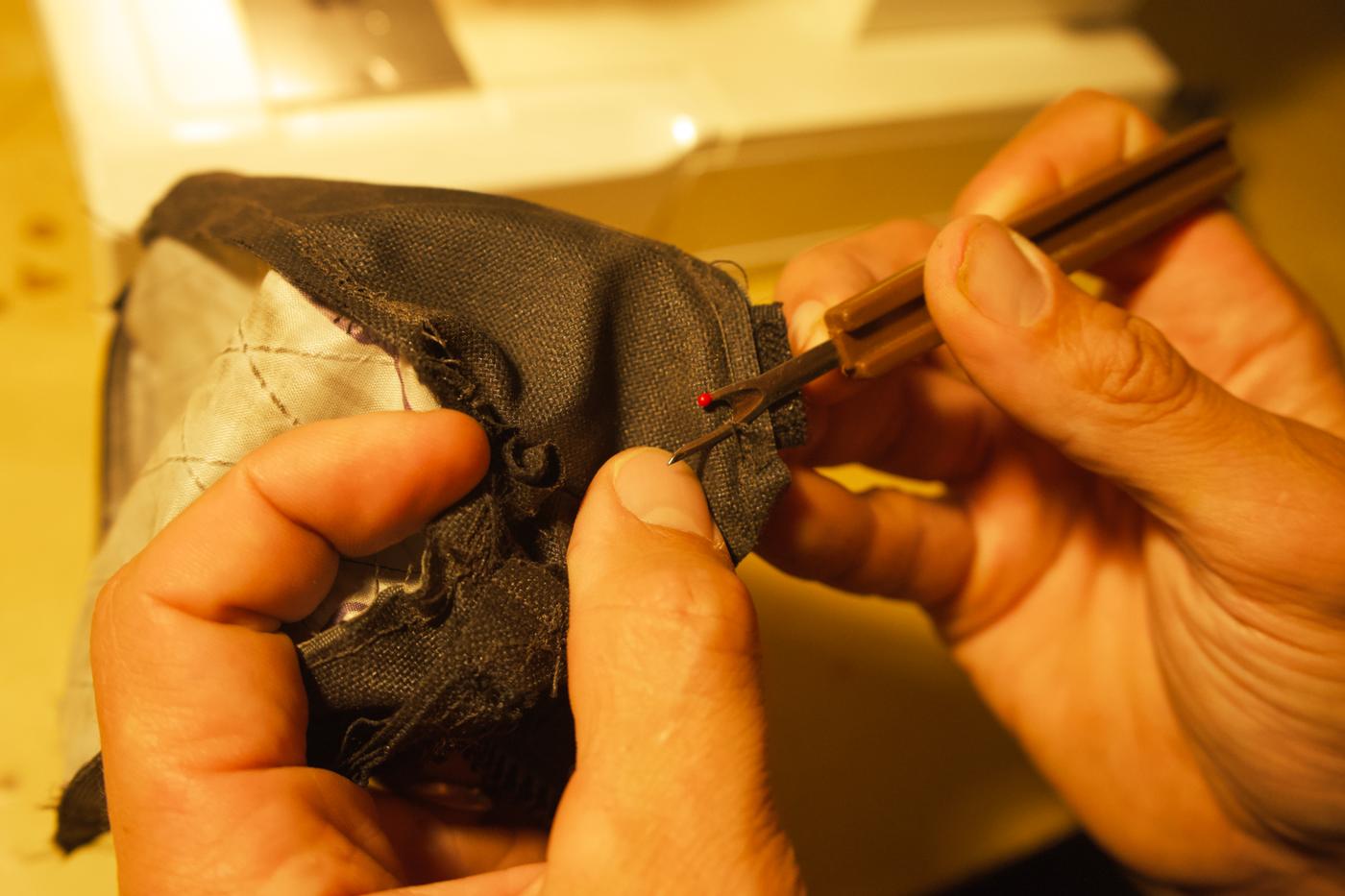 You Can Fix Your Mistakes

Before I made these bags, I’d barely ever touched a sewing machine. So, pressing down on that foot pedal for the first time was a little stressful. I had put a lot of effort into measuring, cutting, and assembling the components I was binding together, and I really wanted to get it right. But again, not being all that familiar with this world, setting stitch to fabric felt a bit like setting paint to canvas. Once it’s there, I figured it’d be hard to take it back. But it’s actually pretty easy to hit CTRL+Z on recent work and try it again.

A seam ripper is an elegant little tool that can safely remove stitches without damaging the fabric around them. If I didn’t like the way a corner lined up, or if I made one of those rookie mistakes that needed to be undone, it was rarely a big deal. As a quick sub-tip straight stitches are important. Even slight bends, when a bag is under tension, act like stress risers. If you get bumped off-line, reach for your seam ripper and try again.

In fact, if you choose to attach your mounting straps by inserting them between your bag’s panels, most methods actually require a seam ripper. My point is, you don’t have to stress if things aren’t coming together as nicely as they are in the tutorials. Just do your best, and if something doesn’t line up, backtrack a bit and then do better than your best. 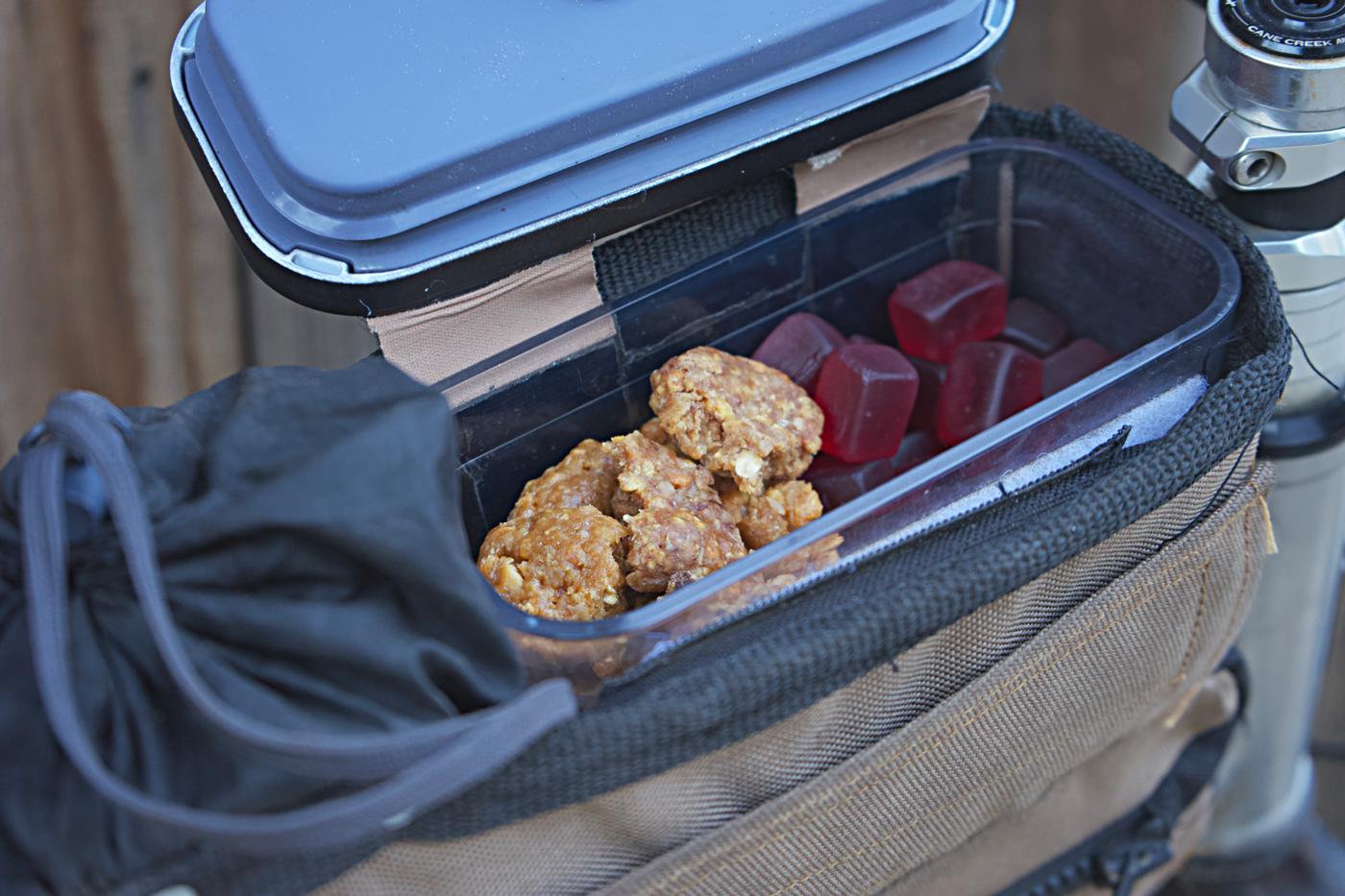 This was the best part of making my own bag. I wasn’t just choosing from a bespoke shop’s drop-down list of features. The sky was the limit. So, you should think about exactly what you will be carrying in this bag. Build it to fit your cook set. Or your hydration bladder. Add a pocket that fits your phone or multi-tool or flask. And keep in mind, this isn’t an all-or-nothing deal. If you don’t want to weigh your bike down with any more than two liters of capacity, that’s where you draw the line. There’s really no limit to the shapes or mounting points you can choose. Do those bike-industry fat cats think the little spot under where your seatstays meet your seat tube is too small for a bag? 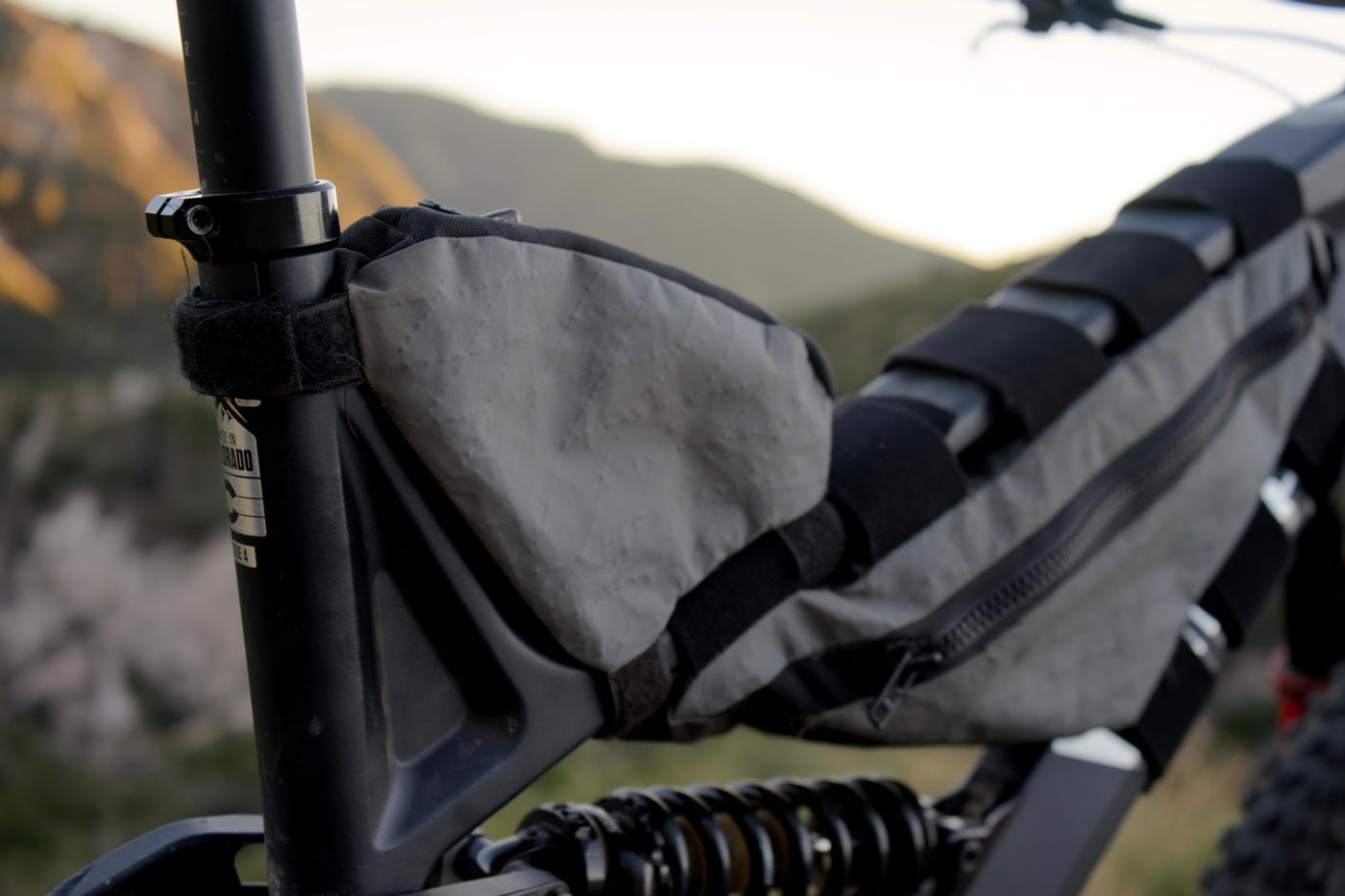 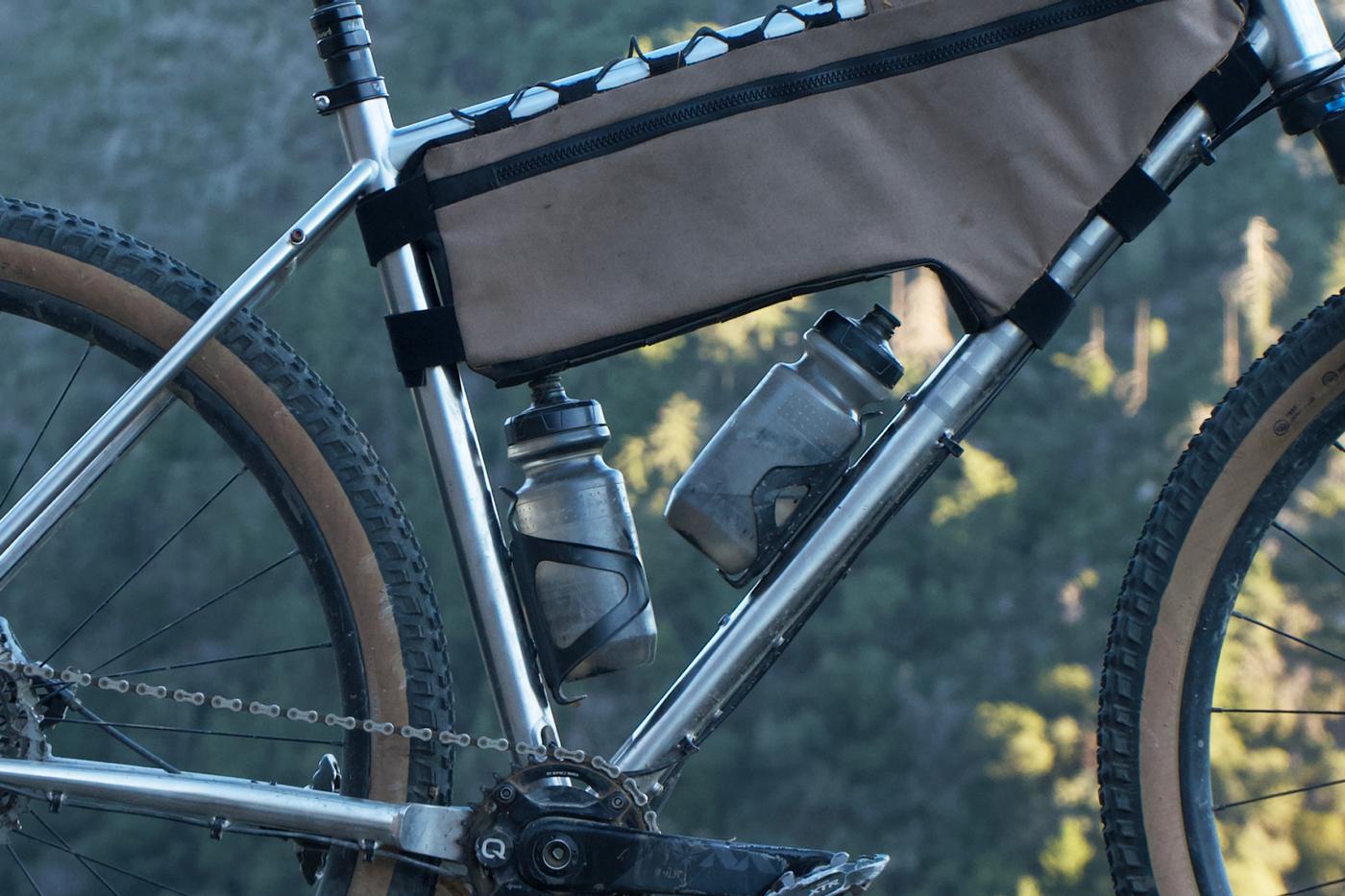 Well, you’ll show them! Once you realize the freedom you have, the ideas will just start flowing. I built a couple bags around the Apidura front-triangle hydration bladder, and I sewed magnets under the outer layer to stow the hose. I made a two-piece set that allows me to pull out the lower half when I want the convenience of bottle cages. And I have this top-tube Tupperware setup that makes eating on the go a breeze and cleanup a snap. Playing with ideas has always paid off … except for the magnet thing. That still needs some work.

The whole reason I like frame bags is on-bike comfort. It’s taking the burden off my back, and putting it on my beast. And that opens up a lot of possibilities. Possibilities that, as frame-bag use stretches beyond backpacking, we’re still figuring out. It’s no surprise that you might not find a perfect off-the-shelf bag. Sometimes, if you want something done right, you have to do it yourself.