This is a story of how progressive values and a penchant for both unusual bikes and unusual beer can combine to create the ultimate rambling ride. Most bike designs fit into neat little categories, and while those neat little categories work for most people, there’s a wild world of flavour out there, if you’re willing to take a risk here or there. 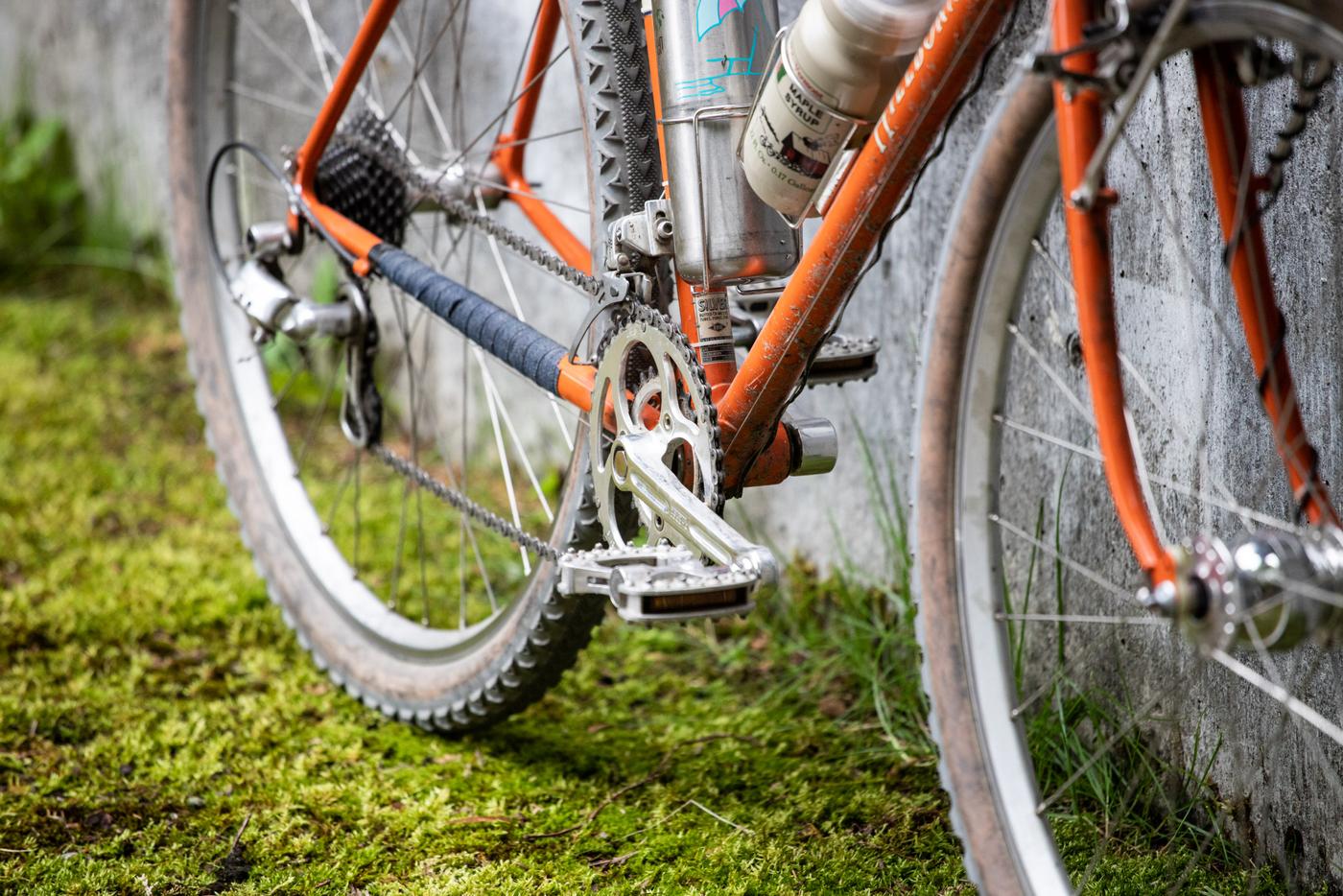 Let’s continue this analogy of risk and flavour and introduce you to my friend Jason. Jason is a lover of weird bikes and weird beer, and when we met nearly two decades ago, we were both sampling the flavours of the pavement with weird old Volkswagens that others told us were too close to the ground.

Jason likes sampling the flavours. A while back he got really into unusual beers. Beers that might only be available seasonally, beers that might be brewed by monks, beers that might taste like socks and other rotting things. He amassed a great collection of bottles and then realized, hey, I could be doing this myself. 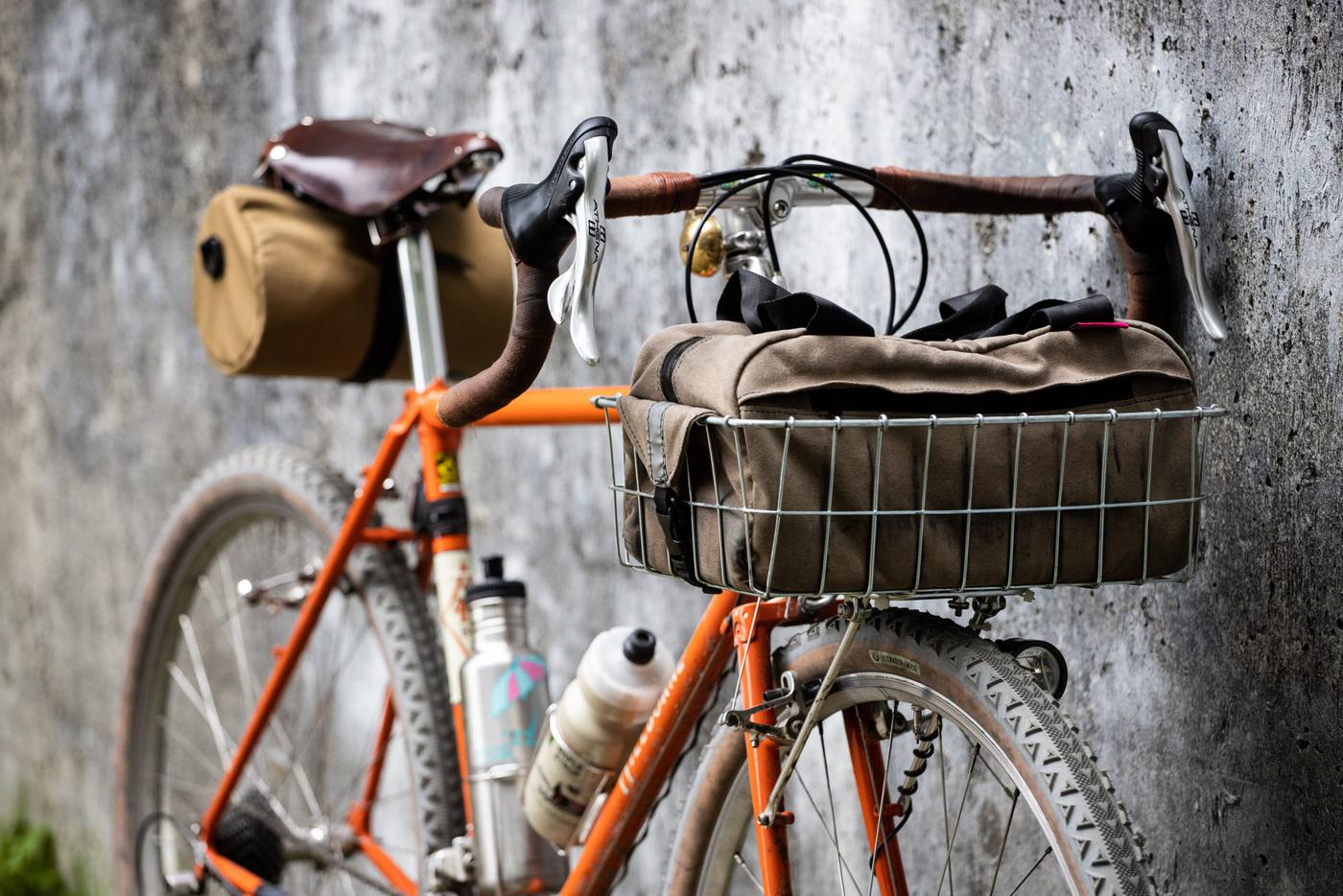 So he got into brewing his own beer. It’s a little less commitment than building your own bike frames, which isn’t really an option for apartment-dwellers like ourselves. When you’re experimenting, sometimes you go too far, and that’s OK. Sometimes you brew a beer that tastes a bit too much like socks, when you wanted just a little bit of sock. (For the record, Jason likes sock beer a lot more than I do.)

At some point Jason found that the local craft brewers were doing the same types of experiments he was into, and that he could plot a route, ride out and visit them, come home with something nice, and do a little ramble along the way. And that leads us to Jason’s current collection of bikes, and a closer look at his Rivendell Sam Hillborne. 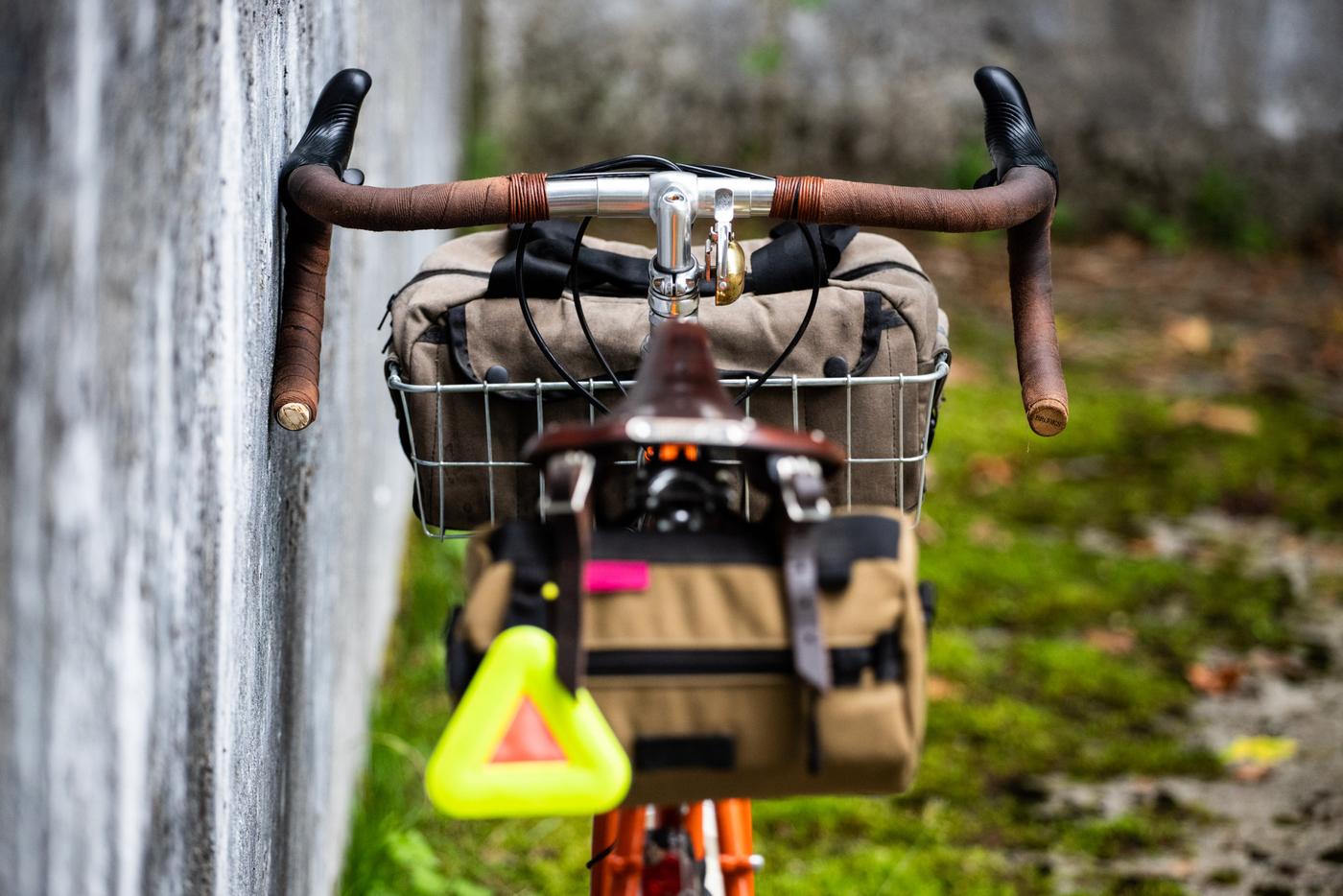 Jason’s bikes tend to stick to the philosophy of the (stubborn?) outliers of practical cycling. His current collection includes a Sheldon Brown build, an “old” Grant Petersen build, two “middle” Grants, and what used to be a Jan Heine wiggler, now just a frameset on the wall. You know, bikes that taste a little bit more like socks than some folks prefer.

Jason’s Sheldon Brown bike is a Raleigh Twenty – which I originally bought off Craigslist for 25 bucks – that despite significant modification is still lockable around town (a feat I am so far incapable of accomplishing).

His “old Grant” bike is a Bridgestone XO-2, because his previous XO-1 didn’t fit enough tire to be as useful as he wanted. He still happily rode the longest (at the time) ride of his life on that XO-1 earlier this year, so it was a good bike – just a bit too much sock for his liking. 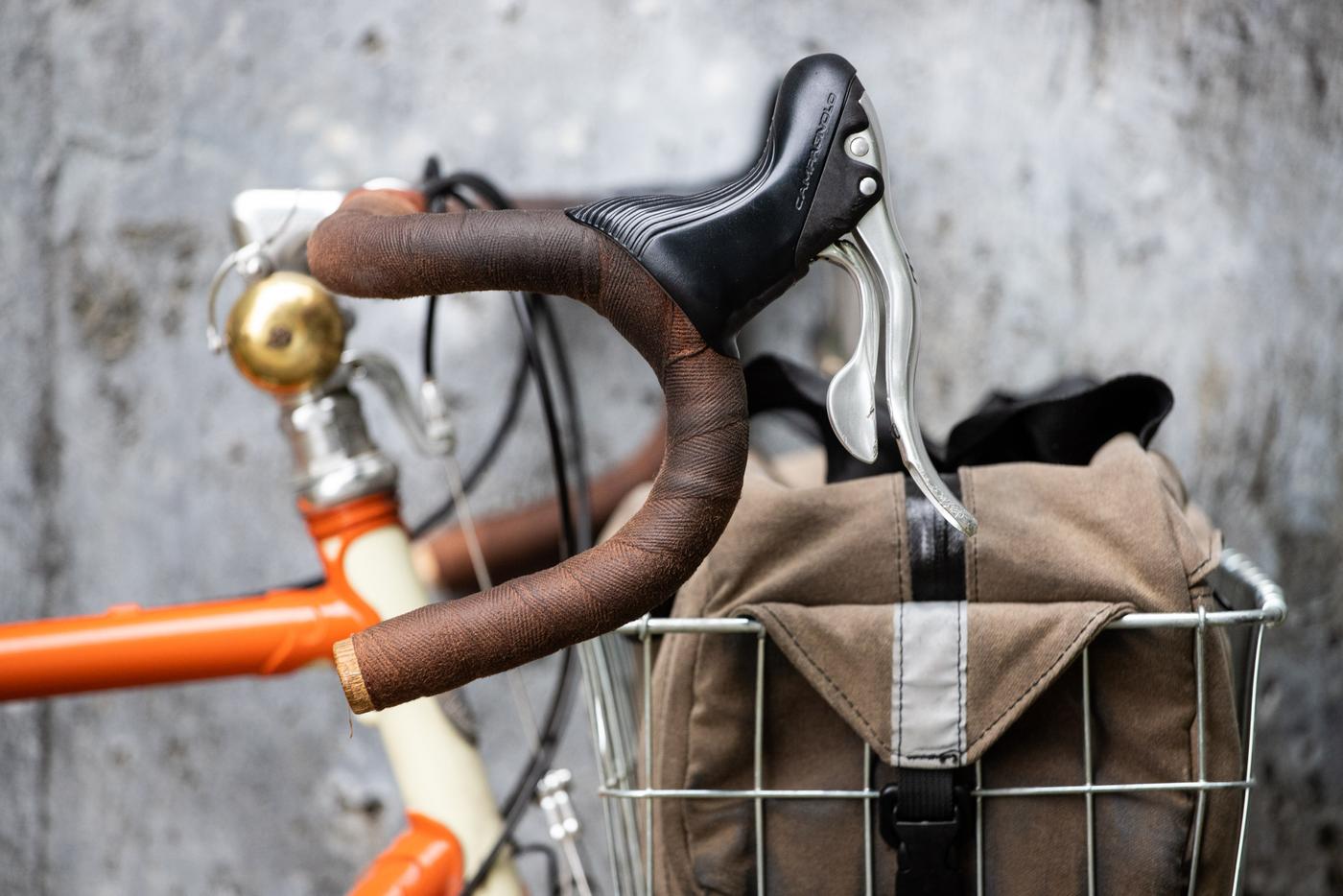 And finally, he’s now got his “middle Grant” bikes – two Rivendells. This Sam Hillborne was his first, and it’s turned out to be even more than a fan of Grant would hope for. The second, a Clem Smith Jr. townie build, is at risk of being displaced by the XO-2, but for now it’s still got a place.

I call these bikes “middle Grant” because Grant Petersen’s philosophy has always been ahead of its time, with people not ready for it – and “current Grant” is moving in yet another new direction.

I asked Jason what led him to his current collection being very Grant-Petersen-heavy. He said he wanted to experience “the magic that Rivendell bikes possess that makes them unlike any other maker”. His first foray into a Grant-designed bike was that XO-1: a fine bike but I don’t think it had the magic – or enough tire clearance – despite a cult following. 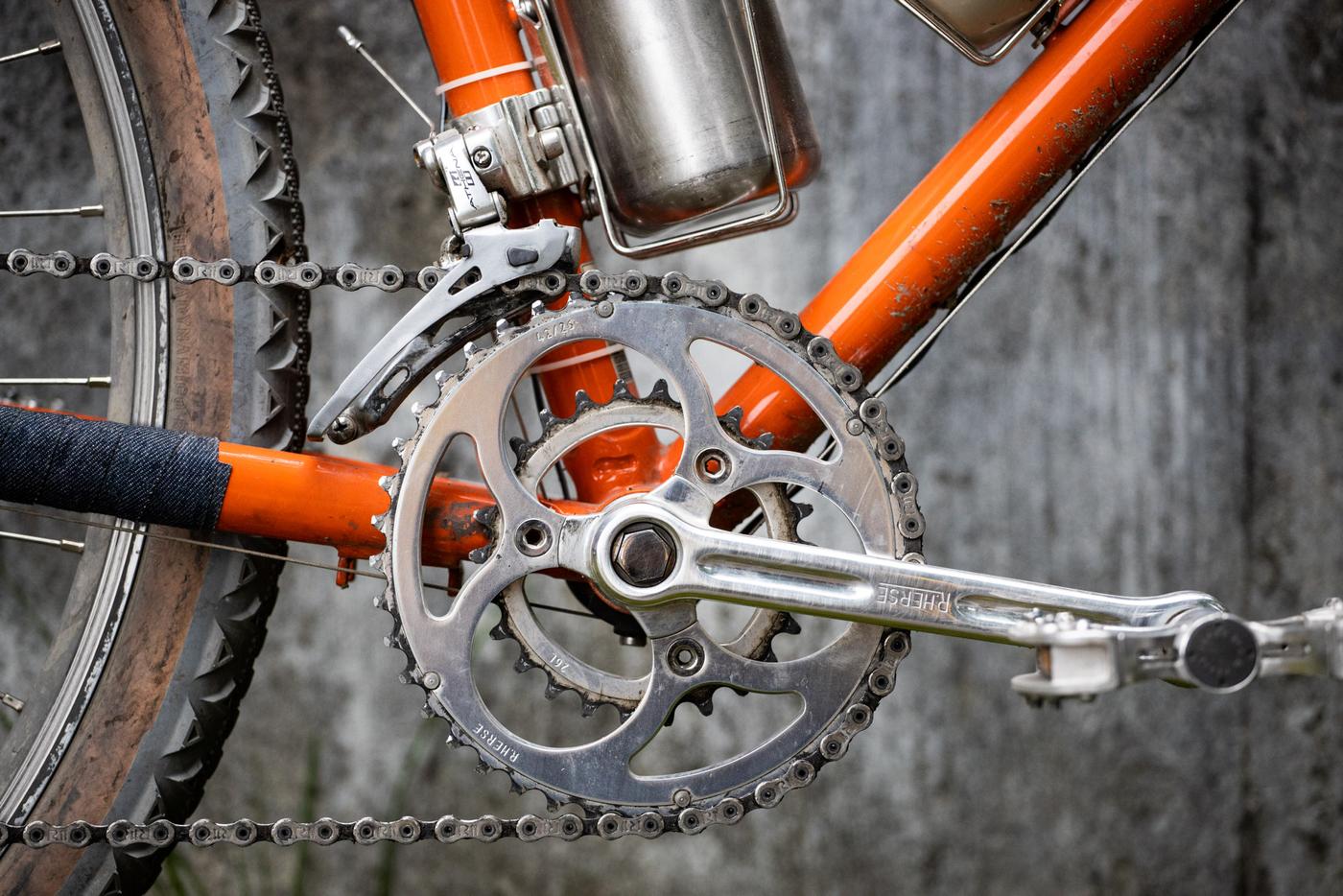 Undeterred, and inspired by Sal’s Hillborne build, Jason made the move on this orange frameset last fall. He swapped the build kit from his Soma Grand Randonneur, including the Campy Athena group, the White Industries wheels, and the beautiful René Herse cranks. The initial Nutmeg-inspired build included a set of Crust Towel Rack bars, a Fab’s Chest, and the Ultradynamico Rosé tires.

In this configuration Jason quickly fell in love with the bike, an affirmation of the magic he sought and a confirmation that a bike can be more than just its numbers. The Pacific Northwest winter soon kicked in and it was back to 42s and fenders and the basket life as the Soma had lived, and the Towel Racks were swapped for a Sim Works So Bar. 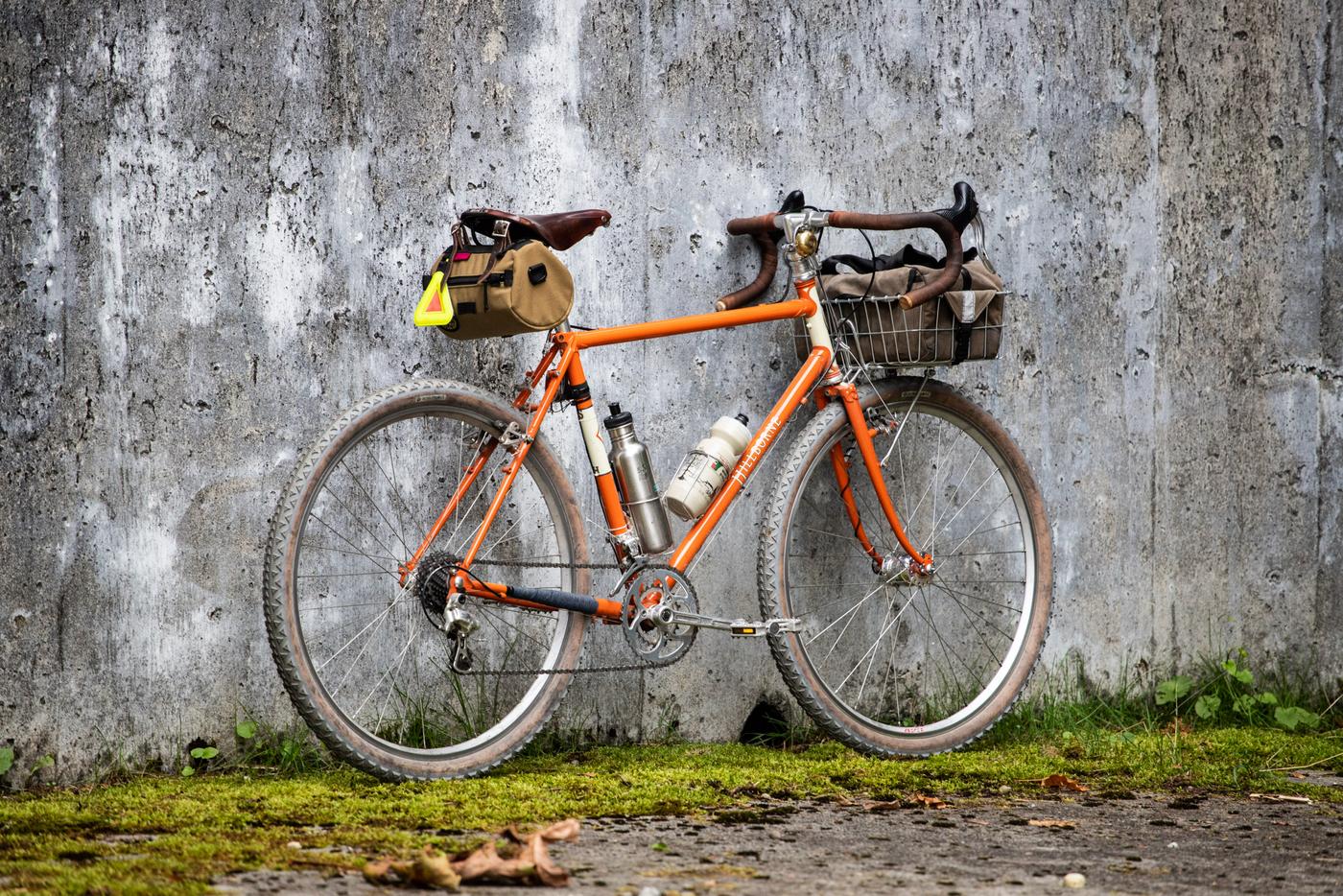 It’s been amazing to see Jason’s average ride mileage expand as his comfort on this bike surpasses anything he’d ridden before. Throughout this spring and summer, every weekend included an extended ramble to visit his favourite breweries. I somehow convinced him to join me for a 200 km ride in August, on a route we’d been discussing for months. Naturally, his sock beer homing instinct kicked in right around the point it became the longest ride of his life.

The Sam Hillborne has a relatively long rear end, definitely a hallmark of current Grant thinking, but now seemingly conservative when you see where the newest generation of Rivendells are going. Sure, not everyone’s going to get on with innovative (even if retro-grouchy) philosophies, but for those who it works for, it works really well. 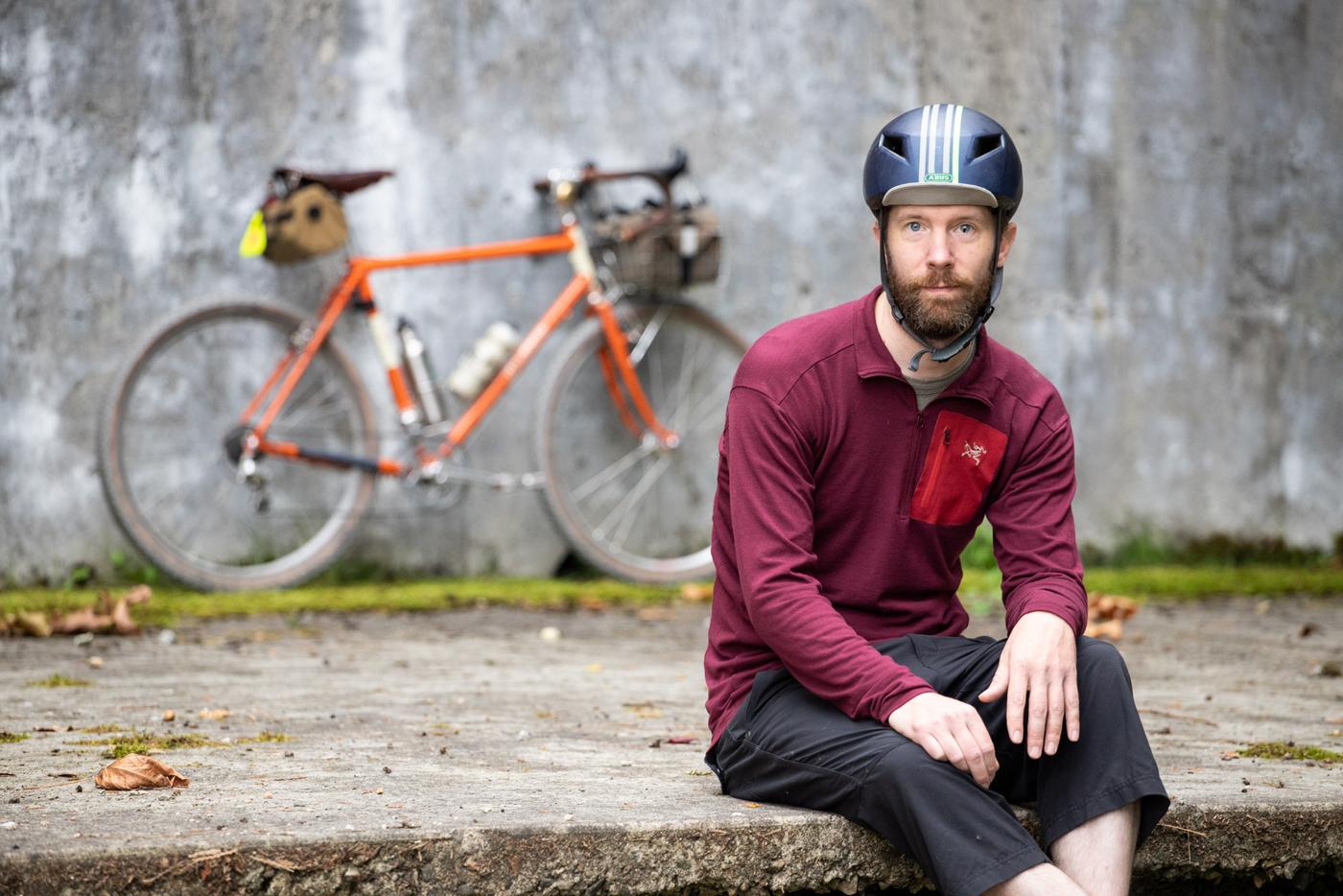 We also know that many folks aren’t ready for forward thinking ideas like Rivendell’s Black Reparations Pricing. It follows that Jason’s affinity for the Rivendell brand goes well beyond geometry, and definitely into the big ideas and socially-minded values of the company. No doubt that’s also part of why you see Swift Industries bags on Jason’s bike.

Despite this bike’s non-standard geometry, Jason says all that thinking fades away as the Hillborne rides amazingly smooth and fun. I personally think that’s the point of trusting an out-of-the-box thinker – that a bike can be more than its numbers foretell. Even when others tell you it probably tastes like socks.