Adventure is the alchemy of people and place. Get these right and the story will write itself. Get one right and you can always make the best of it. Get ‘em wrong and you might as well have eaten that frozen pizza alone on your couch. Luckily, we got all the chemistry just right for one magical summer weekend that we get to share forever through the wonders of streaming cinema. Now, let me introduce you to the people and place that made this a weekend worth filming. As science has proven, everything is made of four elements and this trip too obeyed ancient physics. Shaun (visionaire) [wind]: Deeply committed to the river snorkel, Shaun made everything happen from the saddle of his Beyond+, bringing his boyhood daydreams to life with an air of confidence that fish fear and lizards flock to.

Nate (reportagée) [earth]: Grounded yet talks in the third person, Nate found a fast line through the weekend on his ECR and then helped the crew eddy out at the bar on the way home. There may be no place greater forged of the four elements than the McKenzie River. The upper reaches are sacrosanct trout and salmonid habitat; the lower watershed is the lifeblood of a prolific agricultural valley before joining the Willamette near Eugene. In modern times, it provides drinking and irrigation, power, forest resources, and recreation to central Cascadian residents and visitors. For many thousands of years before, the river sustained native life, especially in the summer and fall for fishing and foraging. The earth has shaped and purified the water over geologic ages. Porous volcanic rock makes for both clean spring-fed waters and a mean surface for tires and skin. Its tenacious basalt flows provide the prominence for a series of the prettiest waterfalls you’ve ever darn seen. Old growth and loam intersperse with young lava fields that make everyday dynamic on the McKenzie River Trail (MRT). The wind is best experienced here while descending the MRT through the waterfalls section. Even on the hottest days, the temperate rainforest breathes coolness into your oxygen-starved climb. On the wettest, it provides a canopy to protect you from the torrent. It is always abuzz with birds, bees, leaves, pollen, and spores- don’t forget to stop and listen. Fire is a reality for the McKenzie and the greater Western forestscape. Shortly after our trip, a devastating fire struck the area, which is still recovering. There is forest fire activity in the region nearly every year, accelerating the ever-changing landscape. A middle section of the MRT is currently closed from fire damage but also for ambitious riparian habitat restoration efforts. The area is healing and hopefully humans can come to help in every little way we can. Riding the trail, and swimming in the waters- these are the things that build appreciation for this place and a respect for nature in general. 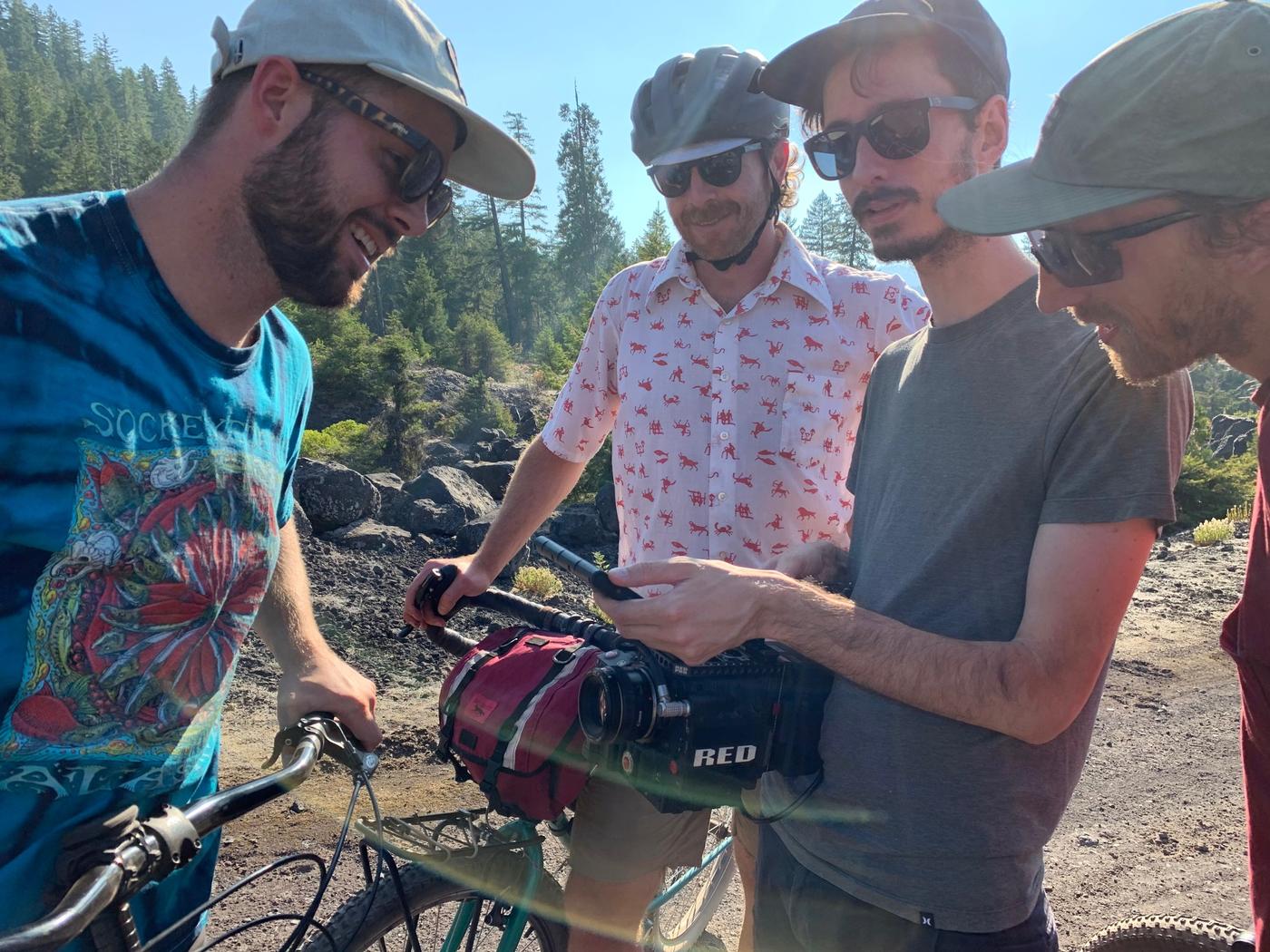 And so, we brought this cast and setting to our talented friends who make movie magic. Octave dangled his RED lens over cliff and trail and, very radically, underwater. We wrangled Matt to cut up the clips in a triple-screened edit bay, thereby ensuring he can never listen to ‘Mambo!’ again. May the universe bless these boys for their creative eye and execution.

Without further ado, we give you the intro to our almost annual micro movie: Fish Pedalers. These amphibious cycle creatures re-interpret a classic mountain bike trail by stuffing their bags with wetsuits and pizza to do some good ol’ fashion river snorkeling. They found the spring-fed waters crystal clear, bitter cold (38 degrees), and thick with schools of native trout. Mixing the sub-aquatics with summer shredding turned out to be the perfect way to slow down fast and cool down faster while observing our native neighbors.

Enjoy some cinematic, operatic, and nearly pelagic pleasures- then, go dream up your next weird bike adventure with your friends.