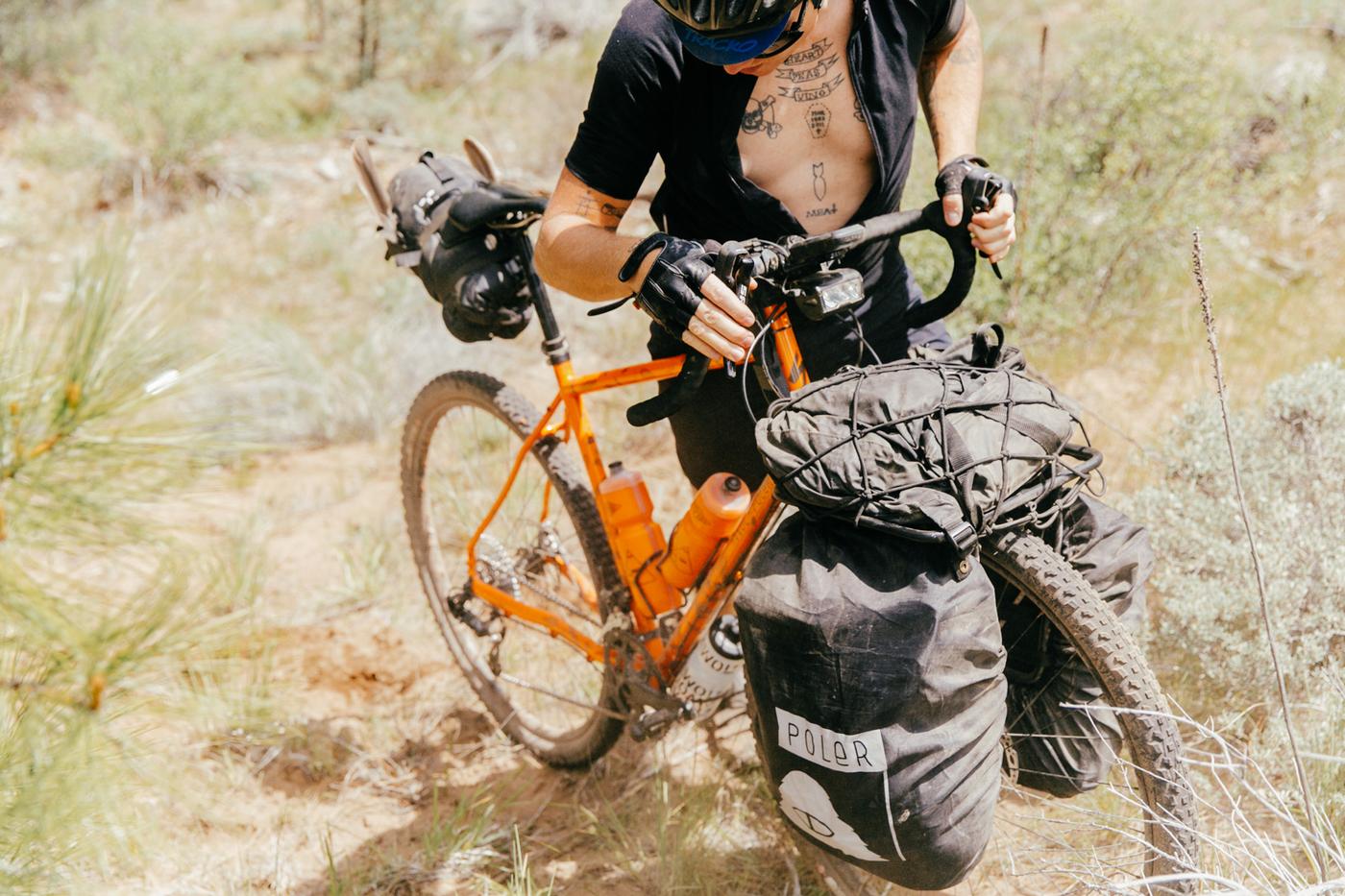 With the success and failure of Erik and my last AWOL ride on the Diablo range, we started looking for another mission to continue the story. This couldn’t be just any camping trip, it had to be hard. Like, really, really tough and big and stuff.

Then it dawned on Erik (I was too busy to actually look for anything) – we’d do Velo Dirt’s Oregon Outback. Erik contacted me in his Swedish voice “ok man, we’re going to do this really fucking tough ride, called the Oregon Outback, are you in?”. Me: “Of course!” – not wanting to sound like a sissy. At the time, I was probably traveling for something and I didn’t even know what the Outback was. I just assumed it was a chill weekend getaway…

Little did I know it was a route that started at the California / Oregon border and went straight up to the Oregon / Washington border. 360 miles, over 15,000′ elevation and 80-90% dirt trails, tracks, and roads. I knew there would be a lot of headwinds – tradewinds go north to south – we were going into it the whole way. 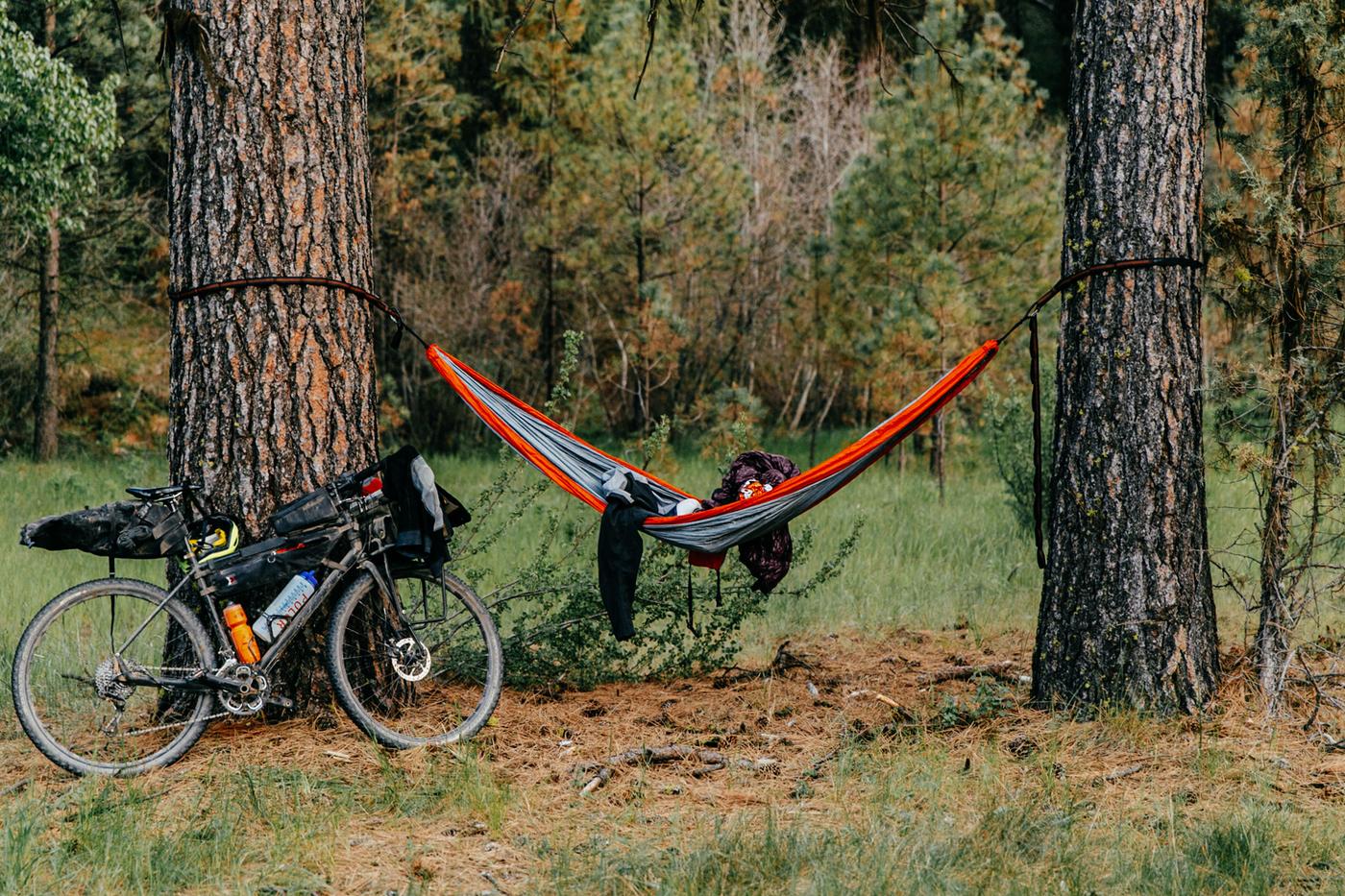 Initially, I was planning on doing the ride on a hardtail MTB, with bikepacking bags, but ended up scoring a stock AWOL Comp. Erik painted up an Outback-themed AWOL Comp and we made our gear selections. Coming off the ATOC, I had done some big rides. I was 185 pounds, lean, fit and ready.

Erik just completed the Brevet series in SF and came fresh off a 600k. If anyone was capable of tackling this ride in three days, it was us. That’s three big days. Fully loaded. Pfffft. We got this! Team AWOL was ready. I flew into SF, got my bike, packed up and headed out the door.

After a 10-hour train ride from Oakland to Klamath Falls, we checked into a hotel and got some rest… It was going to be a big, bad, day. Neither of us was prepared for what awaited in the morning. 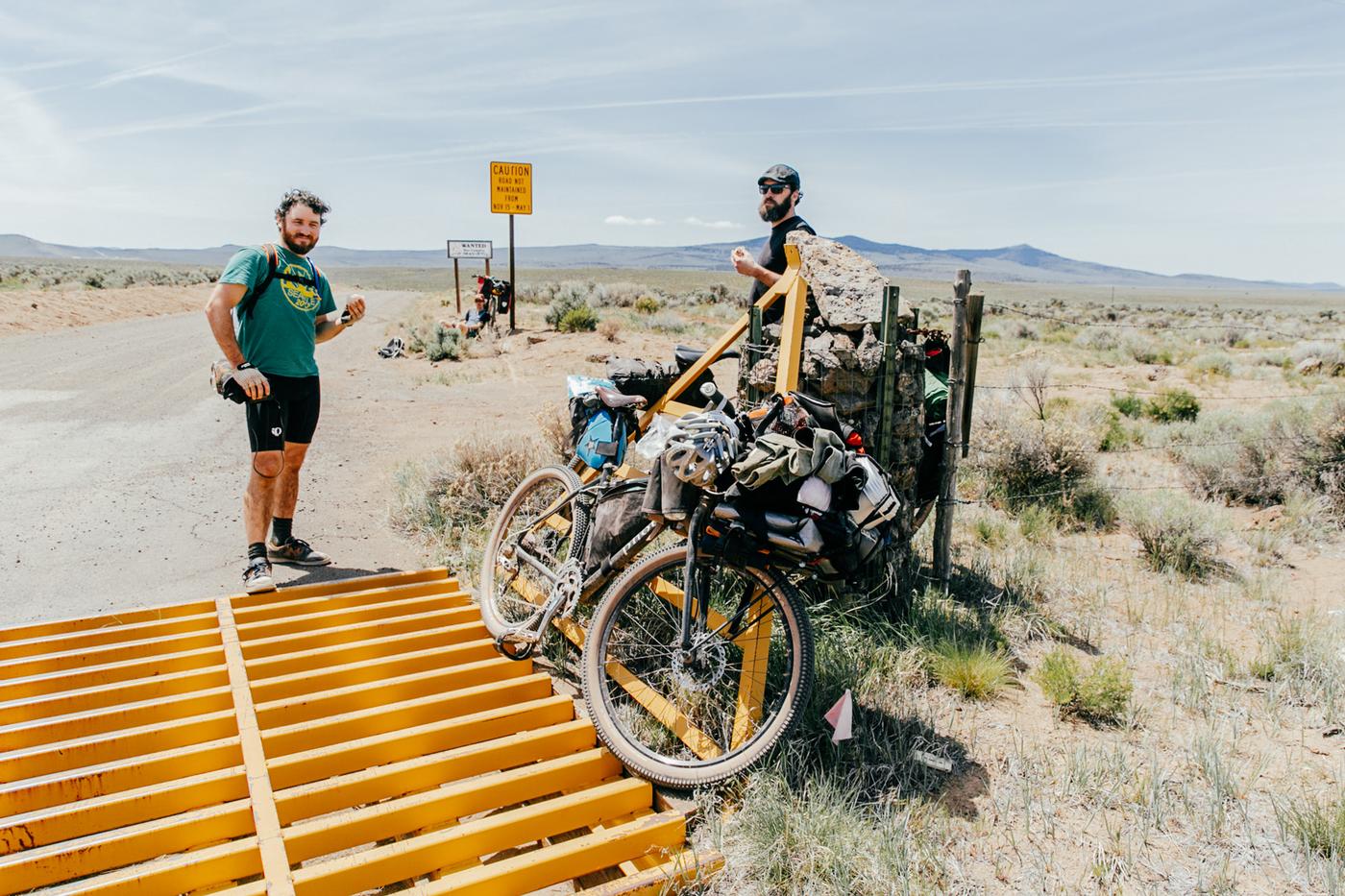 Sand Pits and Rednecks: AWOL on the Oregon Outback – Day 02

The second day of any big ride is usually the toughest. Your body just assumes it’s going to be on the defensive for an unknown amount of time and begins to push back. Usually, that is. For Erik and I, we awoke in the Silver Lake Community Park f-u-c-k-i-n-g freezing. The weather said it would drop to 45 degrees as the low, so he and I brought hammocks and 40-degree bags in the interest of space and weight.

I was shivering uncontrollably, had I known it was going to be that cold, I would have brought a sleeping pad and a tarp, both of which I’ve used to alleviate the loss of body heat that happens in hammocks at such low temperatures. But alas, you reap what you sow. We would be cold on this trip.

Our field guide said that at mile 120-240 we’d be crossing the high desert and would be without water for up to 80 miles. I brought an Arundel Looney Bin to hold a 48oz Nalgene, which, after making breakfast, I filled up. Along with my two large Purist bottles. We had to get moving. Fast. It was 6:30am. 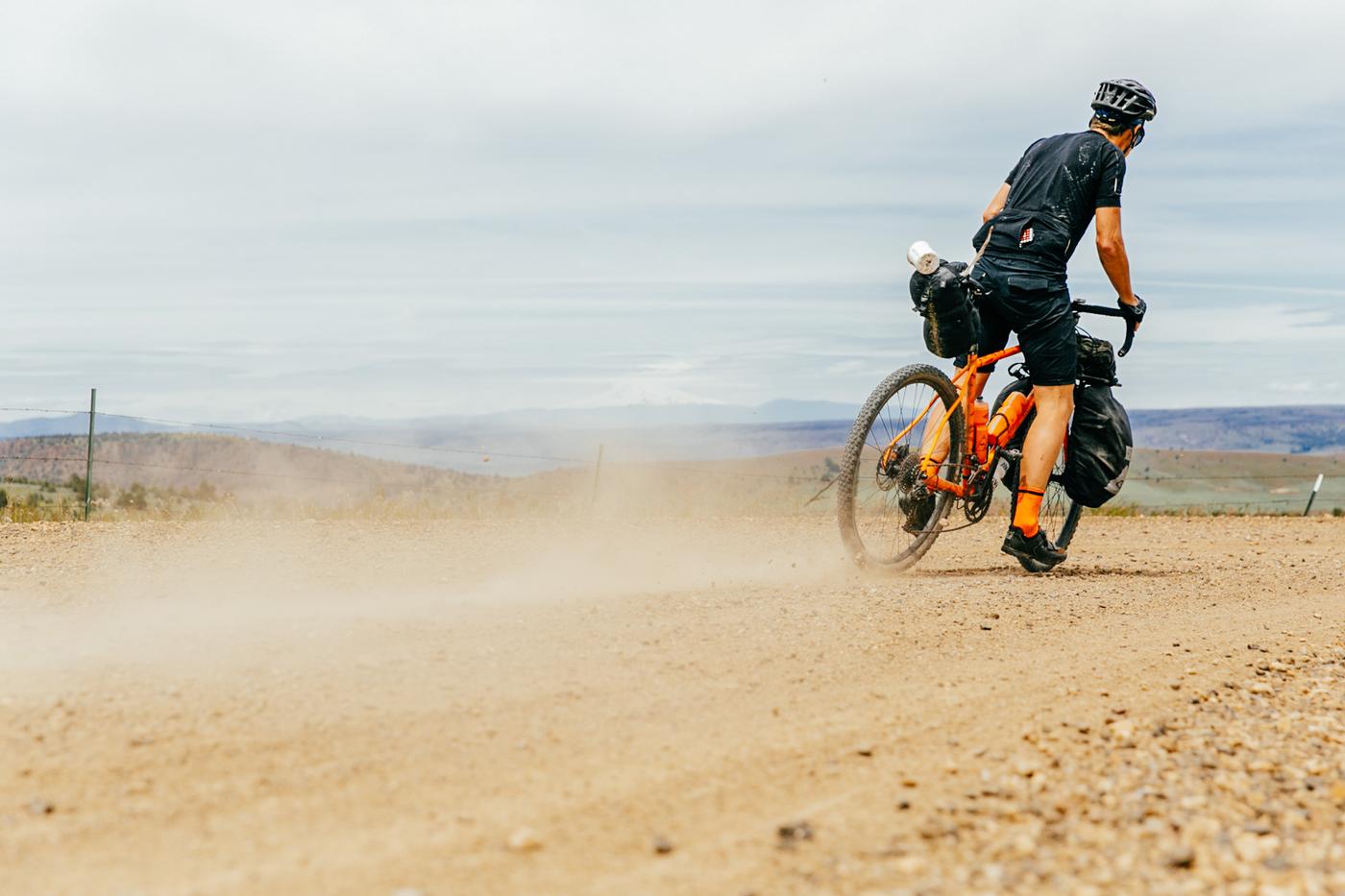 Rolling Hills and Snakes: AWOL on the Oregon Outback – Day 03

When Erik and I committed to riding the Oregon Outback, we didn’t want to absolutely kill ourselves but we were looking for a challenge. On paper, 360 miles is totally doable in three days without crushing your spirit. Hell, I think we could have done it in two and we still would have been ok but that’s not the point.

I had a responsibility. One that I take seriously and that’s documenting this trip. Granted, most of the time, I didn’t want to stop to shoot a photo or hop off my bike, I just wanted to keep going…

This was the hardest ride I’ve done and not because it’s the longest or the dirtiest. It was difficult because I had to keep forcing myself to document the journey when all I wanted to do was put my head down, eat a scoop of Nutella and keep pushing forward. 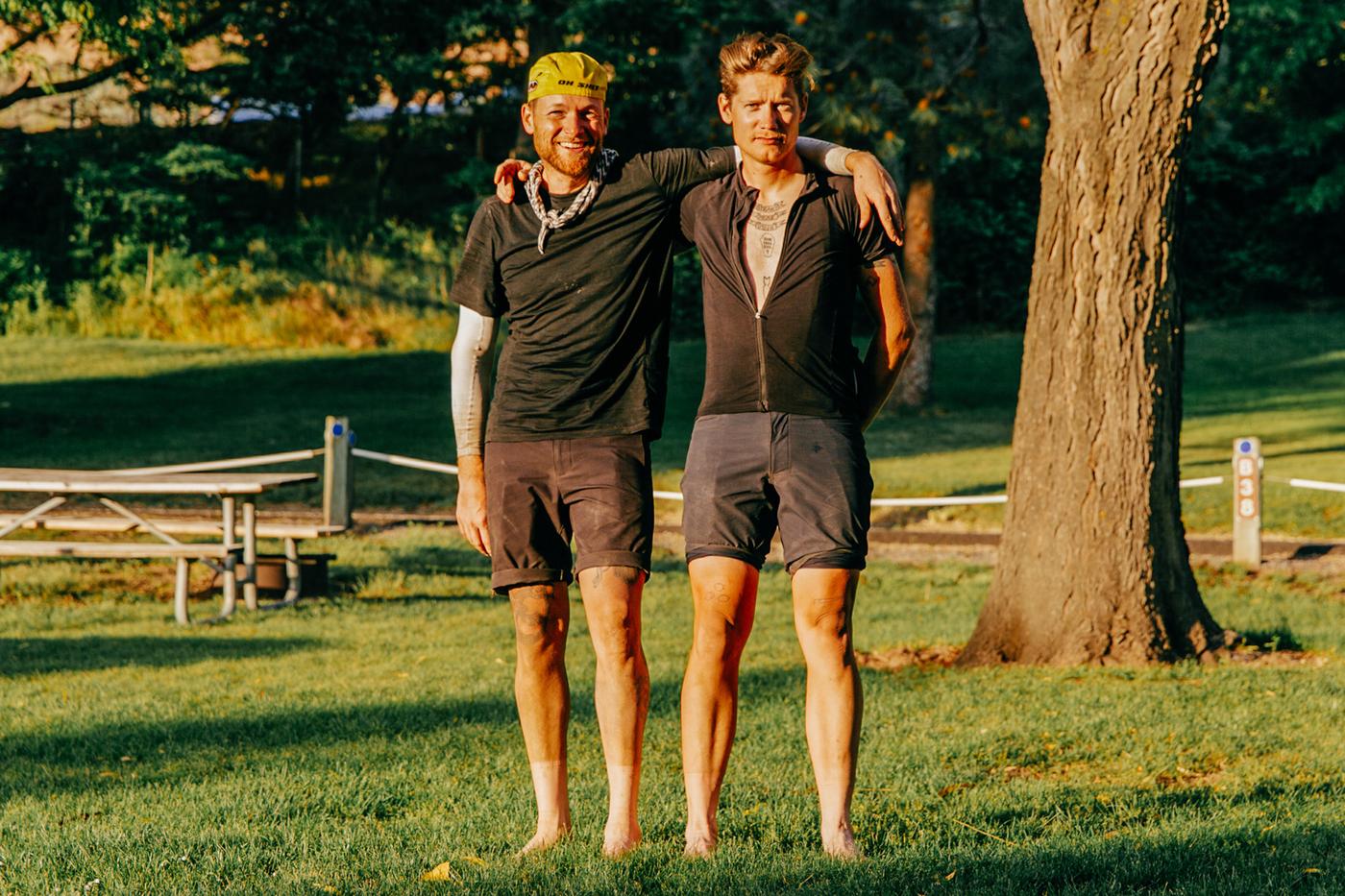 Day three was the most difficult. The night before, I had awkwardly slept on my knee and when I awoke in the morning, my leg was asleep. Not knowing, I stepped out of the hammock and twisted it until I felt a pop. 80 miles later and it was on fire. I had to lower my saddle considerably and stand for just about every climb.

Still, as I’m typing this, my leg is elevated and being iced down.

As cyclists, we’re stubborn, goal-driven fools. Whether our goal is to just finish the ride or to work ourselves into fitness, we, or at least I, get tunnel-vision.

It just so happens that the last day’s tunnel vision was clouded by relentless headwinds, rolling hills, and snakes. A lot of snakes. Erik even bunny hopped one on his bike. When we rolled into the Deschutes State Rec area, we were both pretty beaten up. But hey, we did it… and I highly suggest you do it next year! Same time, same place, Klamath Falls, Oregon on Memorial Day Weekend.

This route is still a popular outing for those seeking to soak in Oregon’s Outback yet the grand depart is no longer running.