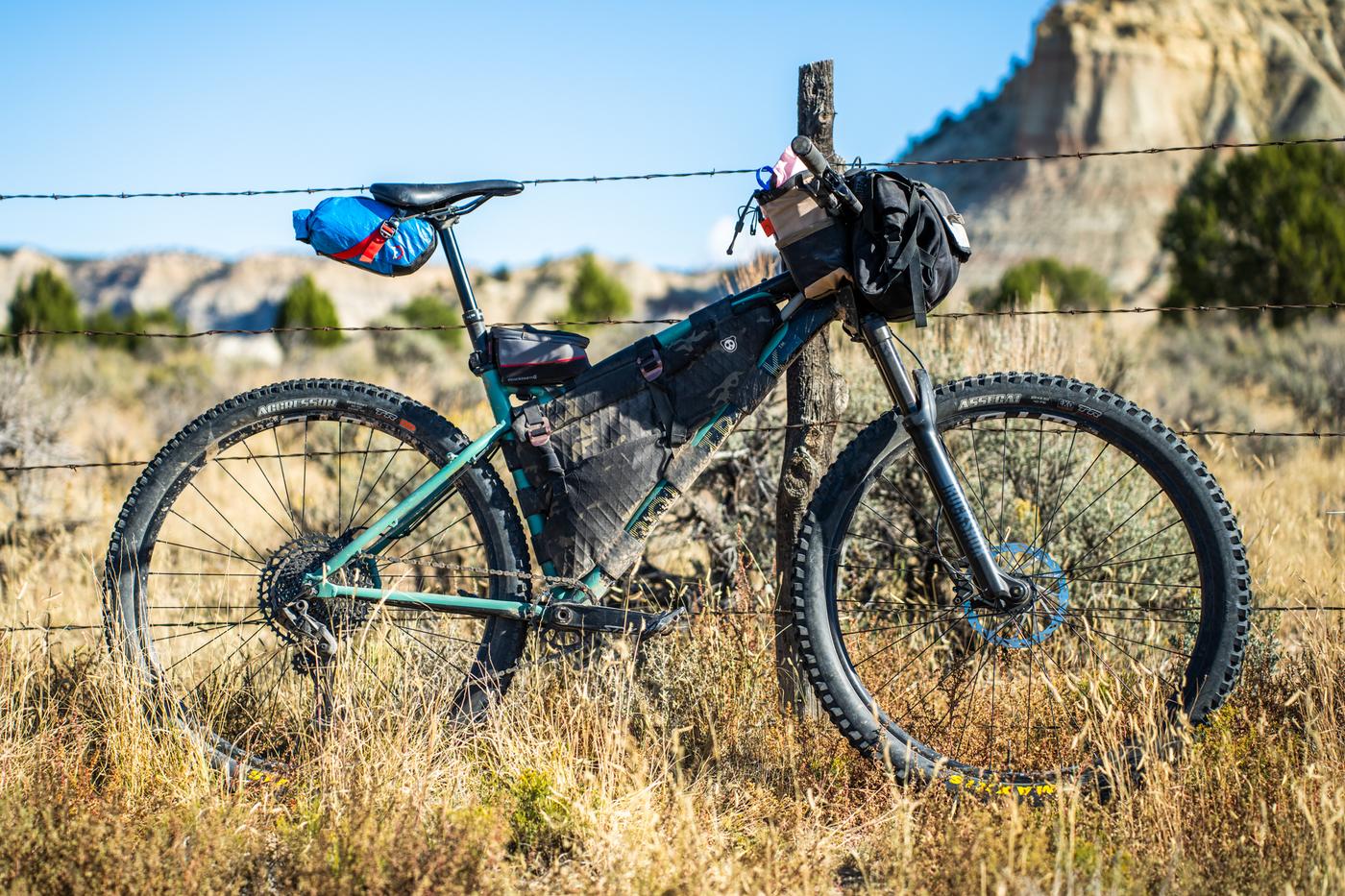 Coinciding with yesterday’s reportage from our bike tour along the Aquarius Trail Hut System, Bryan Harding shares his thoughts on the Bombtrack Cale AL after riding it fresh out of the box, loaded up, for six days straight.

Check out his full review below… 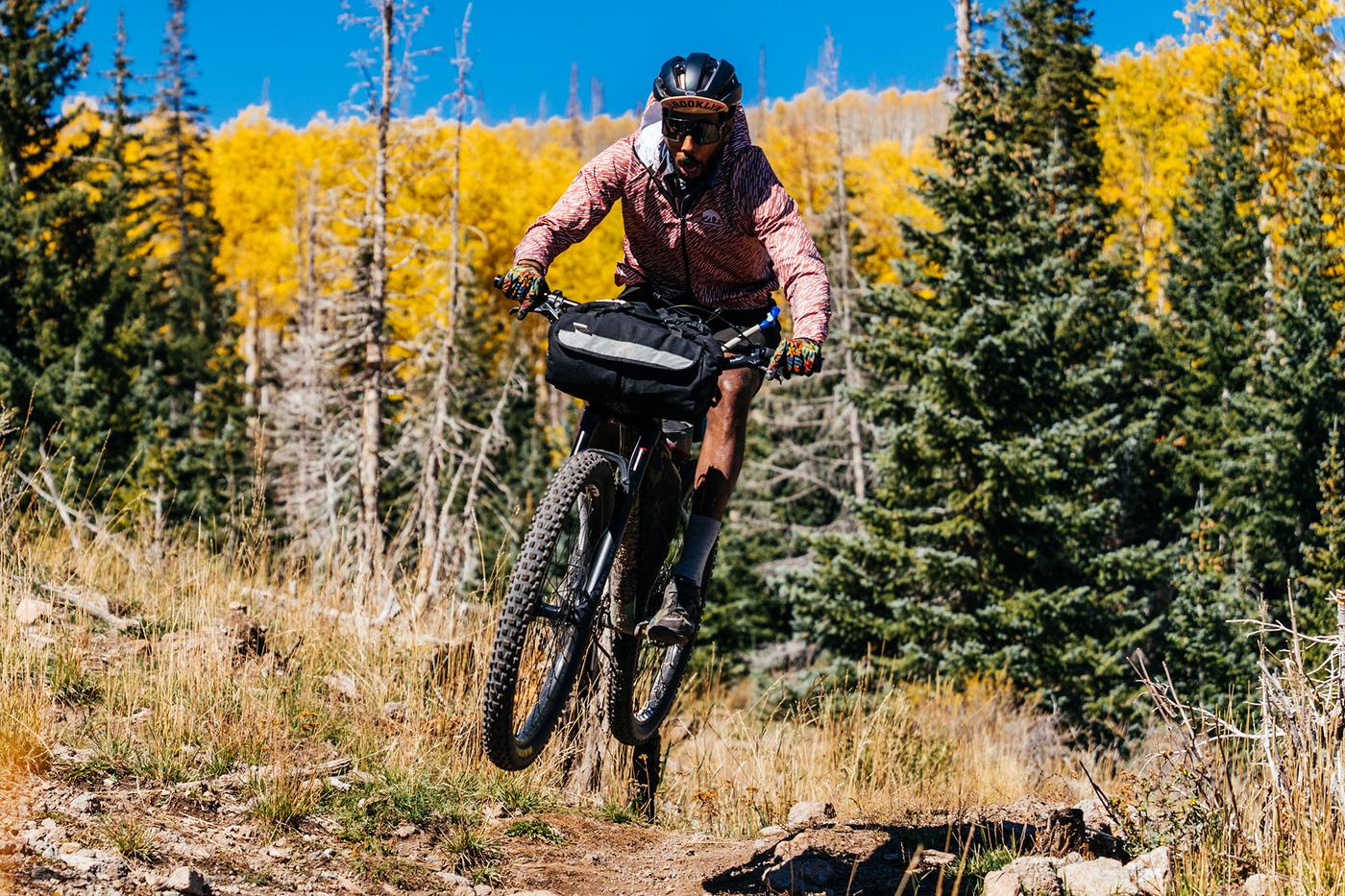 First, I gotta take a sec here and set the tone for this bike review: I’m not a numbers person. I’m the “yeah, that feels good” type. You will not find a section of this review riddled with numbers and opinions on how this millimeter here or that half an angle there affects handling (well, for the most part.) There’s a lot that works on this bike, and it doesn’t take a degree in bike design or engineering, (does such a thing exist?), to comprehend this simple yet practical build.

At first glance, this is an aluminum 29er hardtail mountain bike. You’ve got your knobbies, a dropper post, an air suspension fork, and wide, flat handlebars. If it sounds like a mountain bike and looks like a mountain bike…. But then you start to notice some of the little details. Mounts for a rack over the rear end. Zits, frame zits everywhere! Downtube zits on the bottom side, top tube zits for a snack pack, and three zits instead of two on your typical downtube bottle cage position. It’s clear Bombtrack designed a bike meant to carry your extra gear and still ride well while under load. 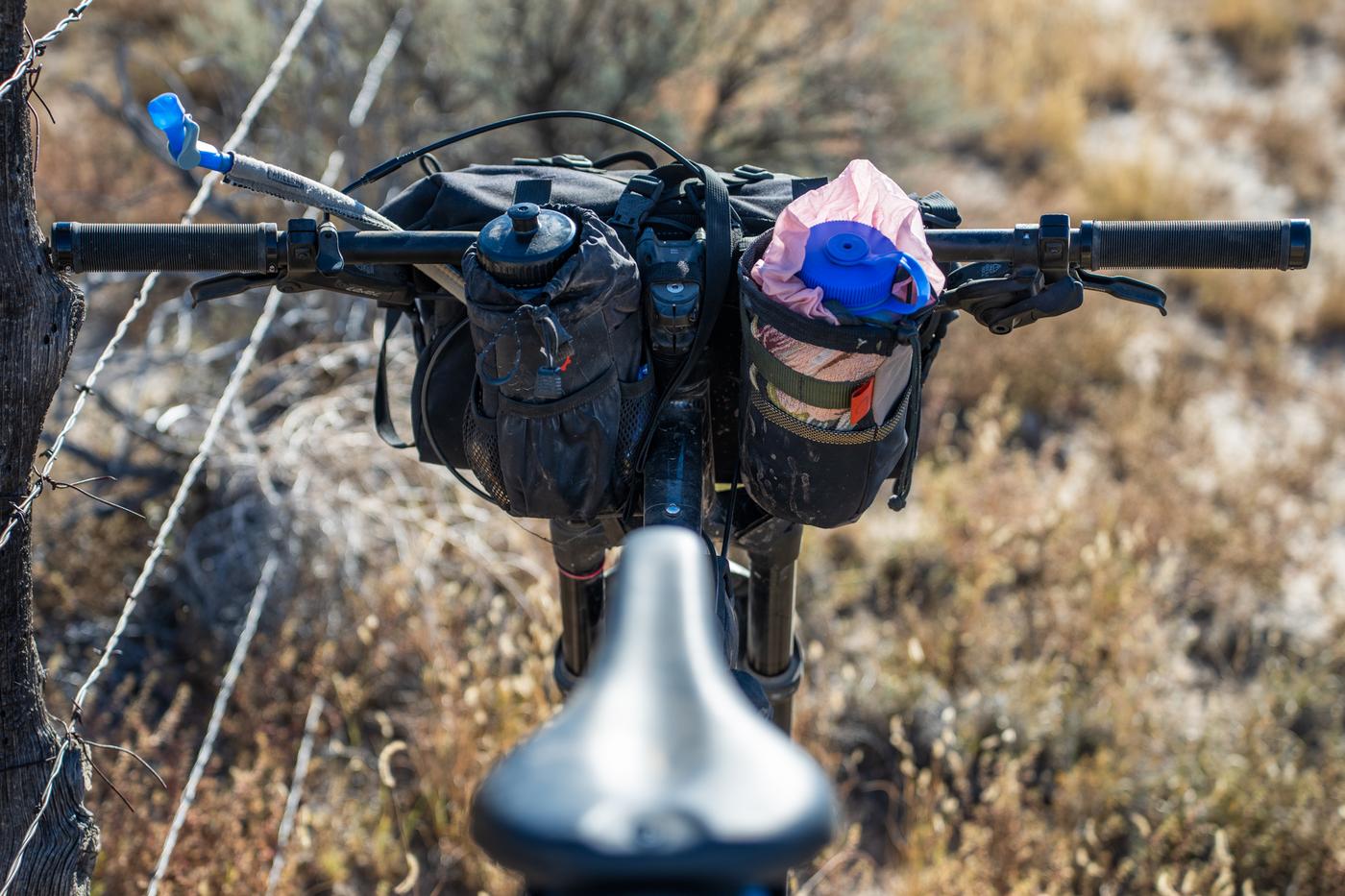 Although Bombtrack touts the ability to switch to 27.5+ wheels and tires, the stock-size wagon wheels seemed to be the winning move for riding this rig across Southern Utah for a week. I wanted a little more rubber than their stock 2.4” Kenda Hellcats and replaced them with some Maxxis “something-or-‘nothers” that Josh had hiding in his garage. I went with a 2.6” in the front and a 2.5” in the rear. With clearance for a 2.6 in the rear, I was opting on the side of caution in case I needed the extra mud clearance, which I didn’t. It was tubeless with no tire inserts on the stock Bombtrack wheelset, which is a WTB hoop with Bombtrack hub. That’s as far as I got with the customization, and then, all that was left was setting the proper saddle position and strapping on my shit. 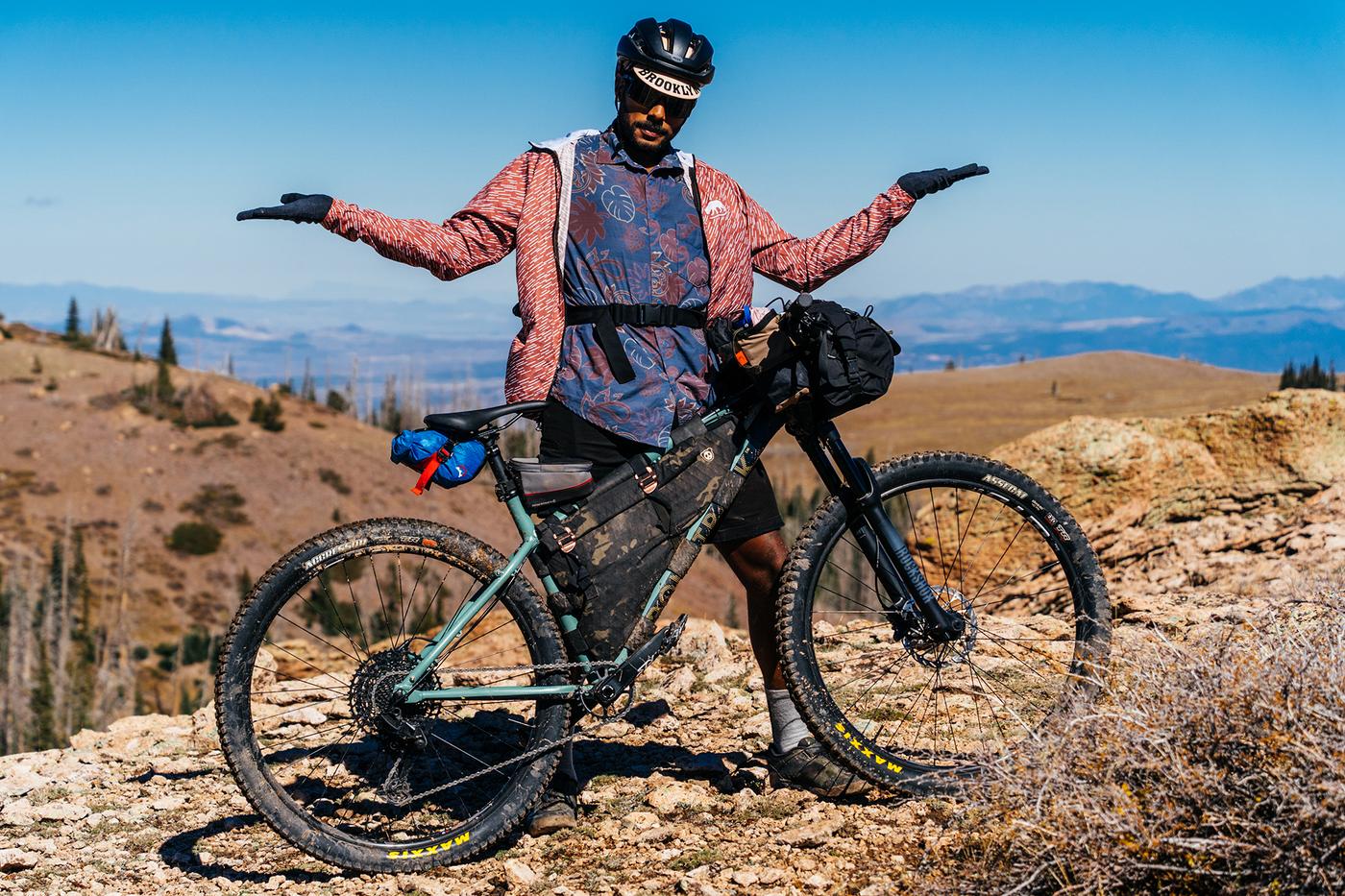 I remember Bombtrack coming onto the scene about a decade ago, back when there were zines dedicated to fixed gear culture and every major metropolitan area had its fixed gear forum (RIP azfixed.com *pours out an OG Four Loko*.) Depending on who you ask, you could also call this time frame the decline of the fixie scene as its culture and physical components had been mass-produced and turned into action movies. A lot of folks like myself at the time were wondering what was going to happen to these new brands as the trend loses popularity. 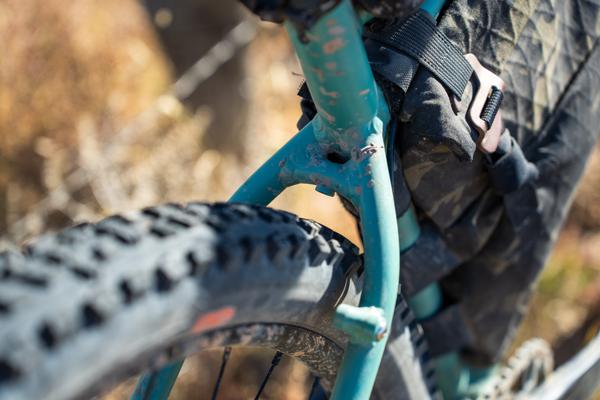 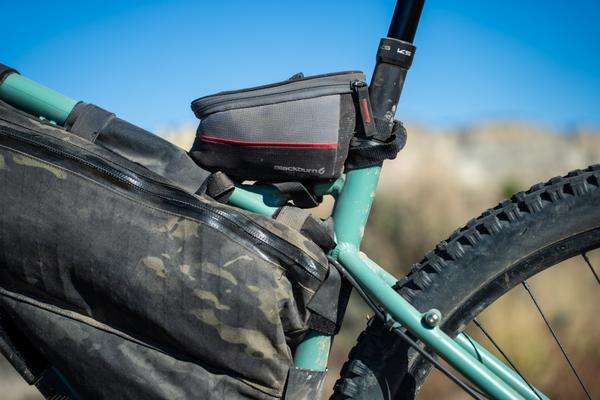 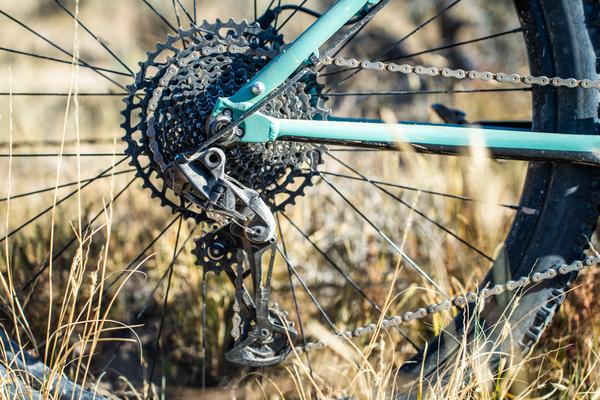 Bombtrack appears to be one of only a few brands to have successfully transitioned from the niche fixed gear market into a brand sporting a complete lineup of bikes, ranging from urban cargo bikes to carbon bikes for racing cross and plus-sized tire bikes for off-road adventures. Gone are the days of trying to make the most “trickable” FGFS bike. Their carbon cargo fork had piqued my interest a few years back, so I was very curious to see how their in-house hubs would hold up out of the box. Spoiler; they spin smooth AF. 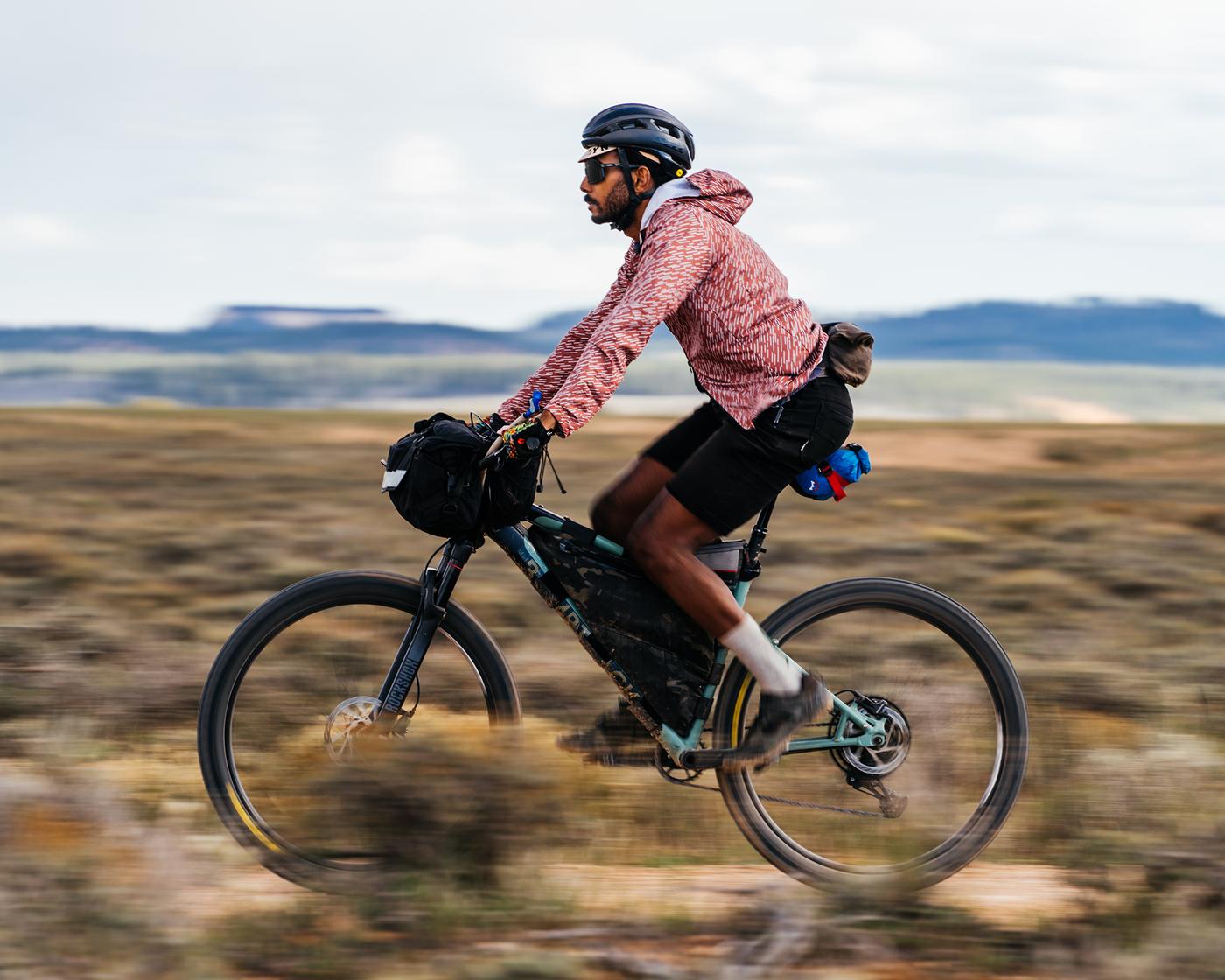 Again, I intend to keep things simple; feelings over numbers today ya’ll. My initial shakedown ride told me this was a bike I could actually fuck around on, but it also confirmed my need for the aforementioned wider tires when loaded. Now, here’s the thing about when I finally rode this bike loaded (and you’re gonna think I’m crazy because folks only say this about steel bikes), but soooo much of the chunder was smoothed out once I packed gear on. It’s one thing to feel comfortable throwing a mountain bike around, but it’s another to trust the bike to handle just as well with an extra 20-30lbs strapped to it, and the Cale AL felt right at home. 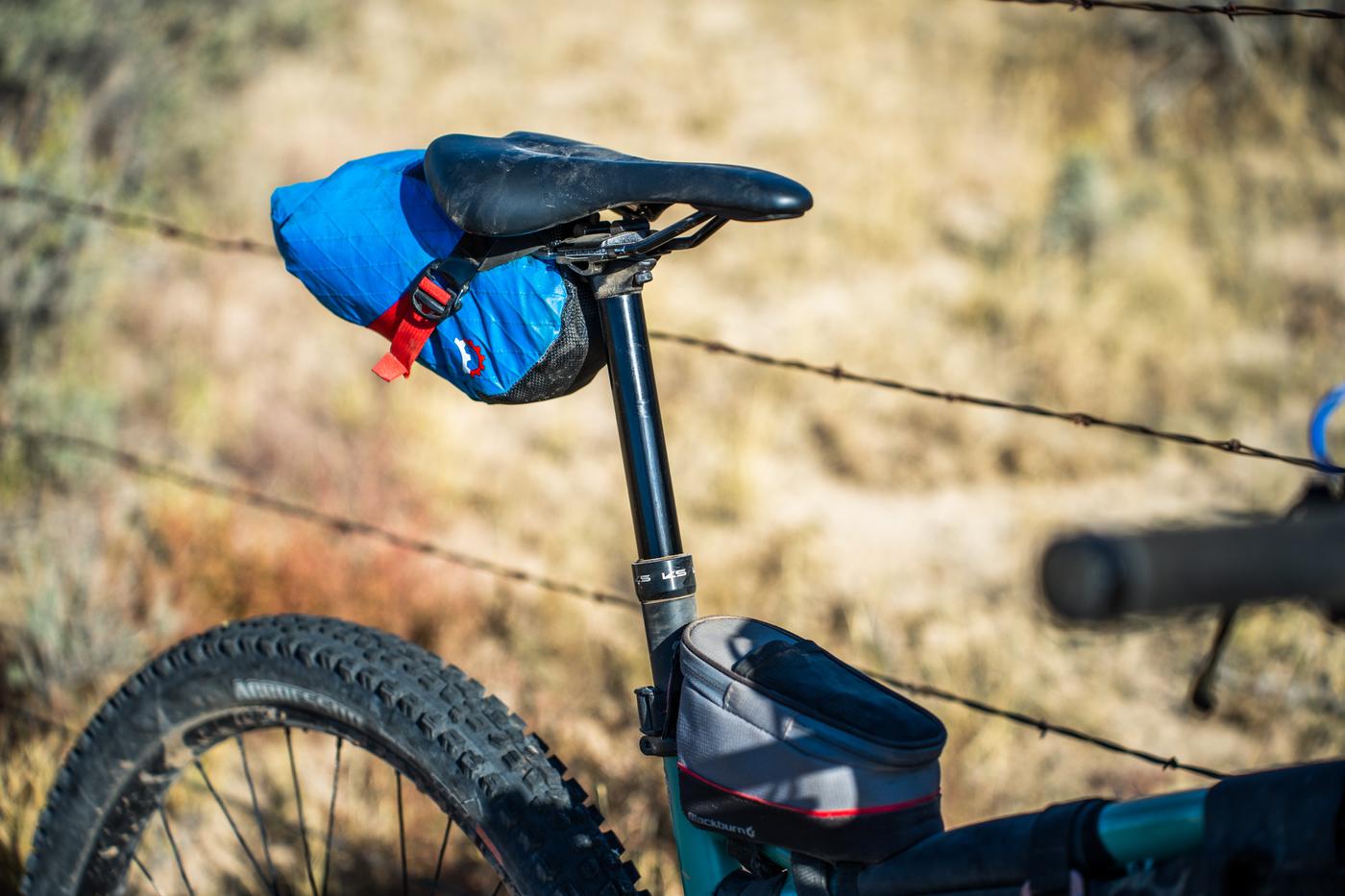 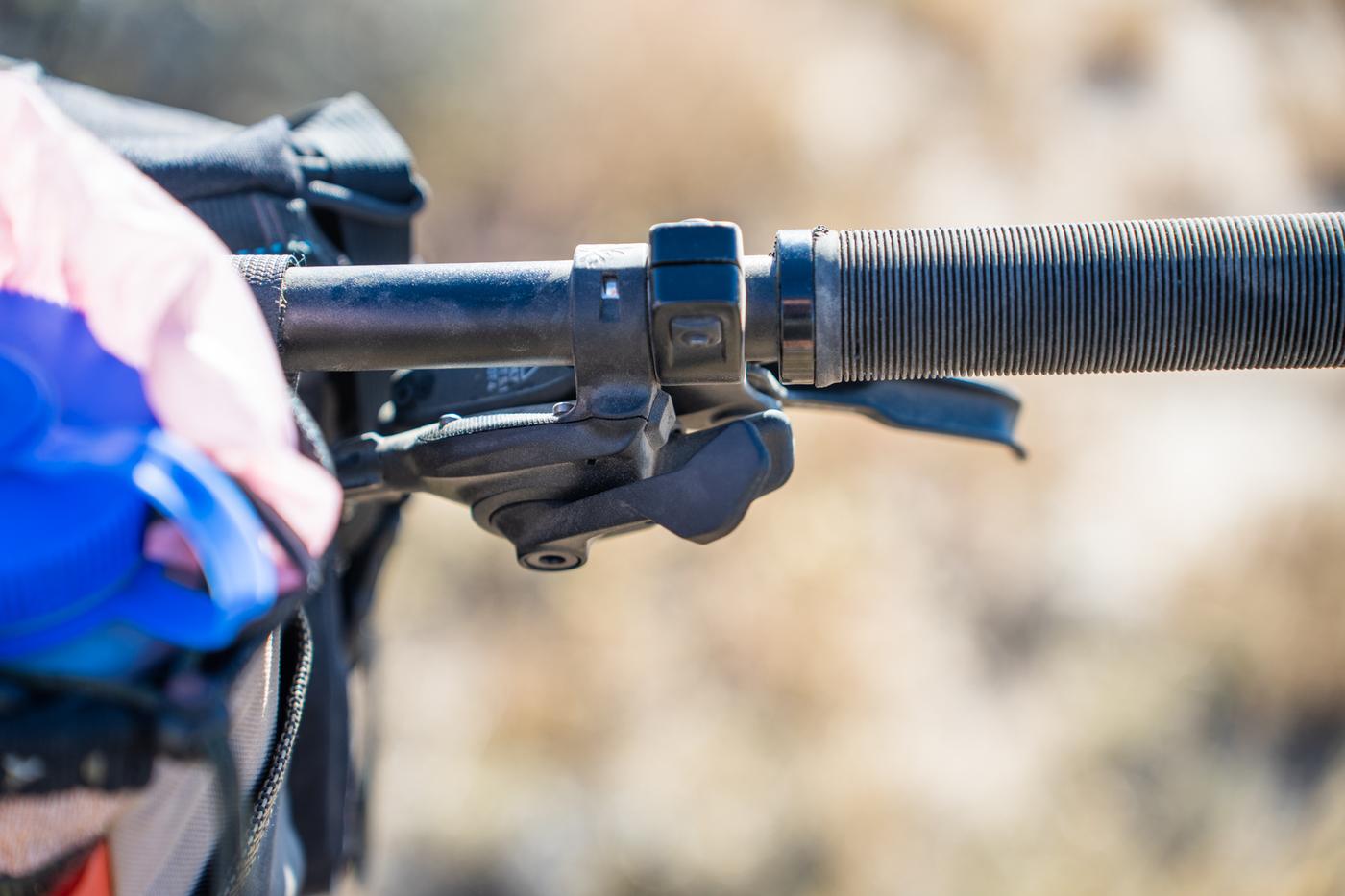 I meant it when I said we wouldn’t be getting into the numbers on this review, but I had to do some necessary research to any some of my curiosity. Curved seat tubes may not be completely necessary. This aluminum build gets away with a straight seat tube while still managing to abide by the tukt rule and keep well within the acceptable wheelbase length of a modern-day hardtail. 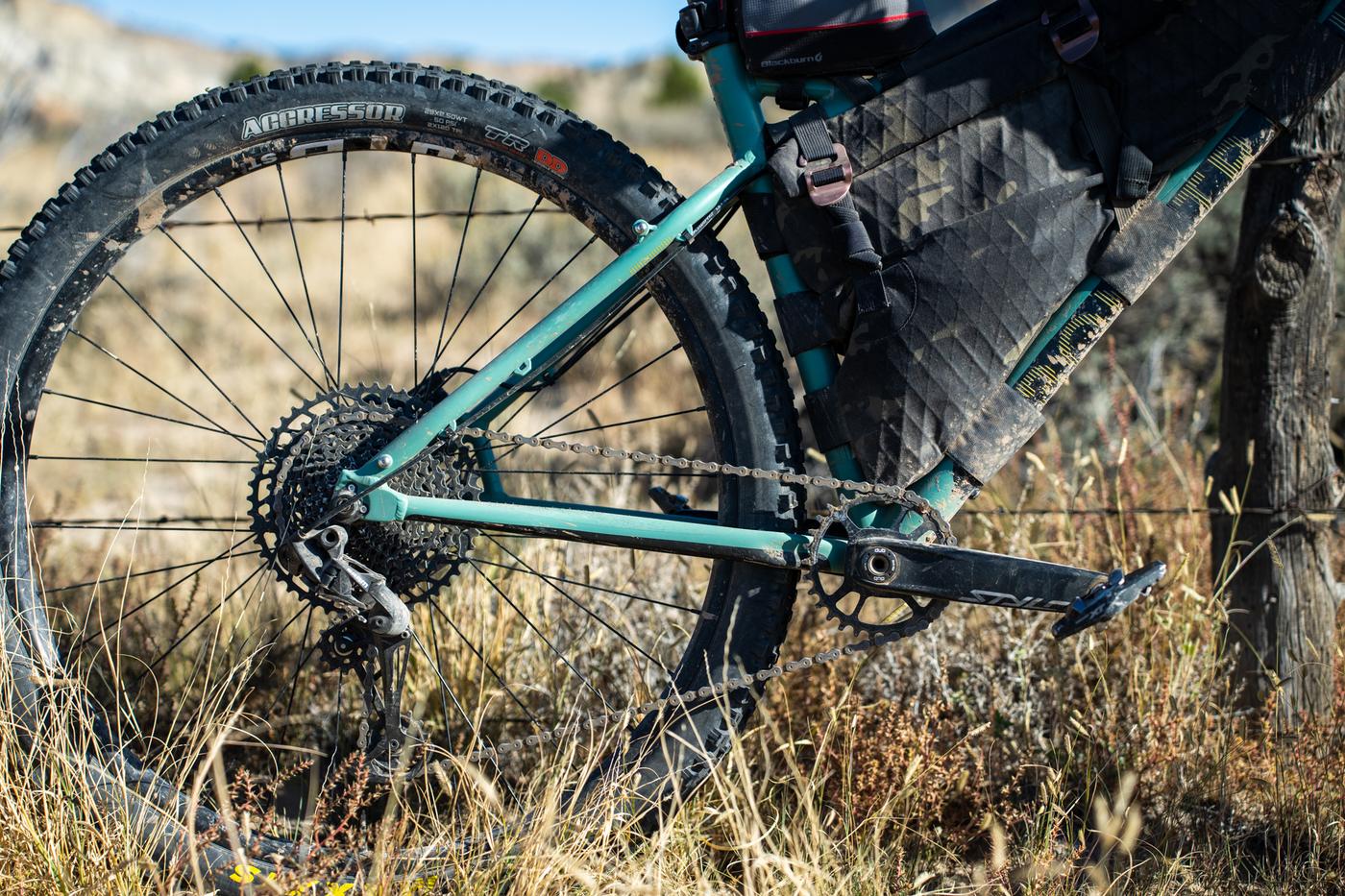 We need to acknowledge right off the bat that although this platform is very capable, it’s an entry-level build that doesn’t make you feel like you’ve skimped out on the major components. I’ll put it this way, how can I best communicate that these parts hold up when I have no complaints? Sure, the higher-end drivetrains will be lighter, and you can better customize the settings on a fancier fork. But my experience is that as long as the shifting cable is correctly tensioned with the proper limit setting and there’s enough air in the fork, you can shred a trail. 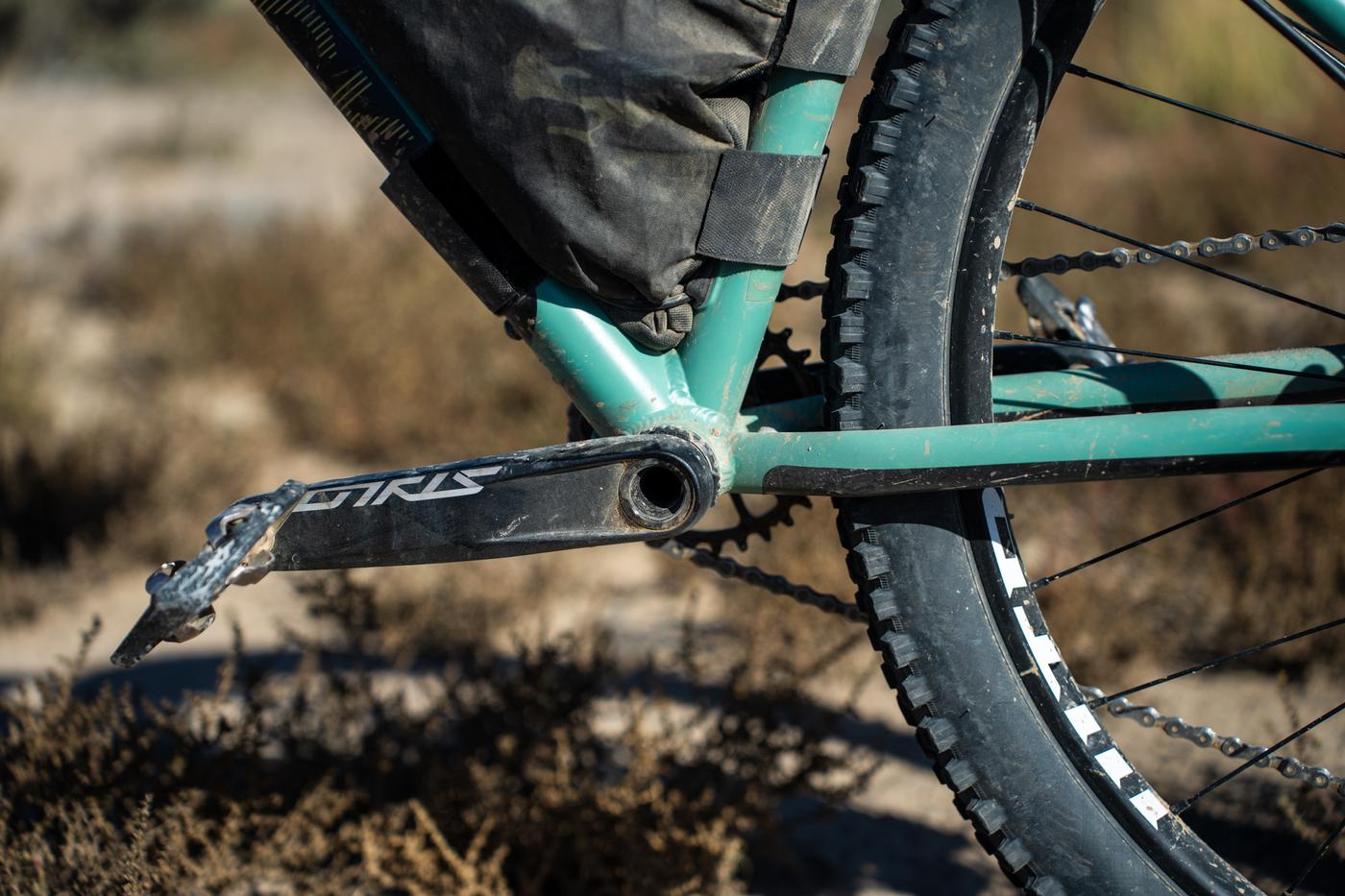 The Sram SX 12-speed groupset held up wonderfully for our trip. Sure, it sounds clunky compared to their top-tiered groupsets, but it gets the job done. For everyday riding, the 30t chainring and 11-50 cassette range should fit most of your climbing needs but if you’re like me on this trip, you may find yourself wishing for a 28-tooth chainring for more sustained climbing when loaded down. 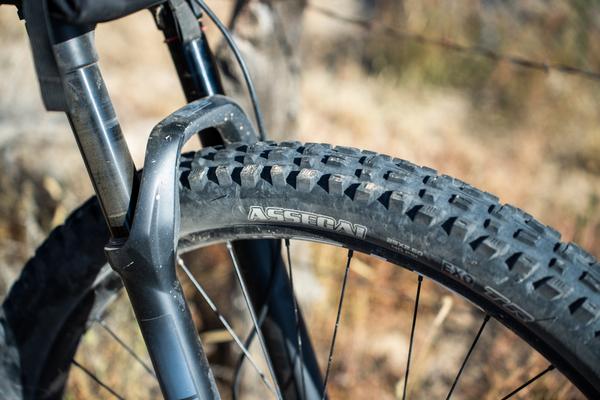 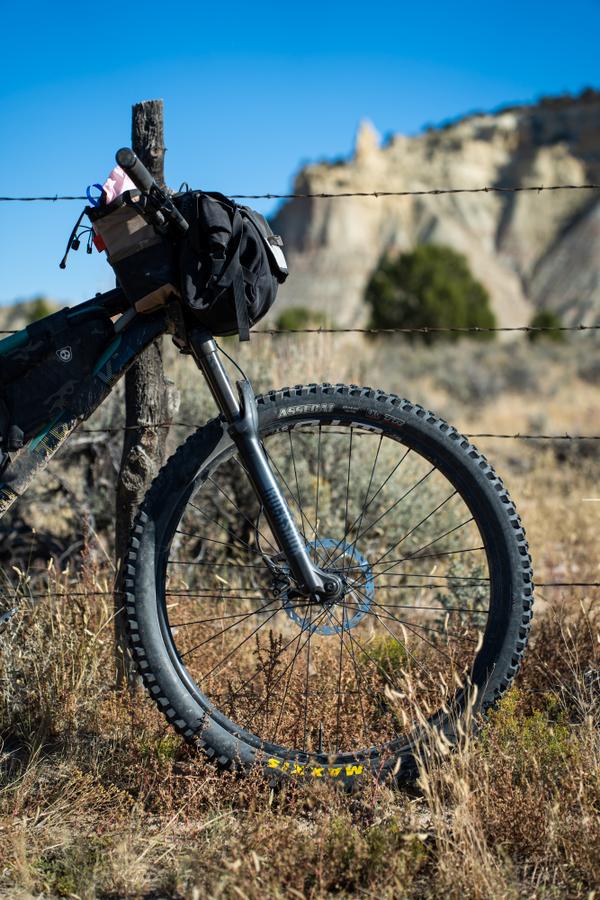 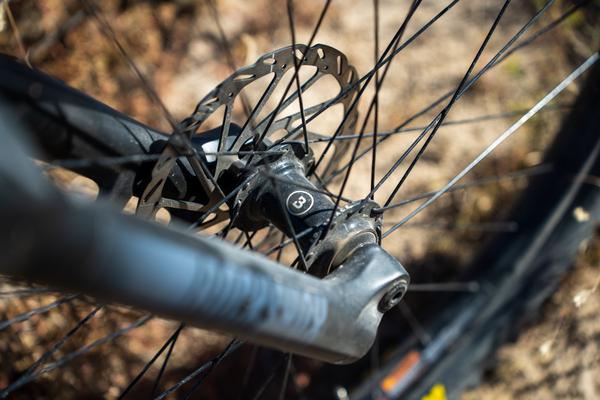 The Rockshox Gold 35 fork is simple and straight to the point. I had some reserves about this fork, but then remembered that I learned how to mountain bike on an 80mm travel, spring-loaded fork before upgrading to the 100mm travel, 30mm stanchion version of this very fork from years back. This modern-day iteration still gets the job done. With the extra riding weight, I wound up setting the fork’s pressure like that of someone about 50lbs heavier than me and actually let a few clicks off the rebound compared to Rockshox suggested settings. I’m a “set and forget it” type so once it felt good, I didn’t fuss with it for the rest of the trip. The simple compression dial on the right stanchion made it simple to transition between fire road and singletrack miles. 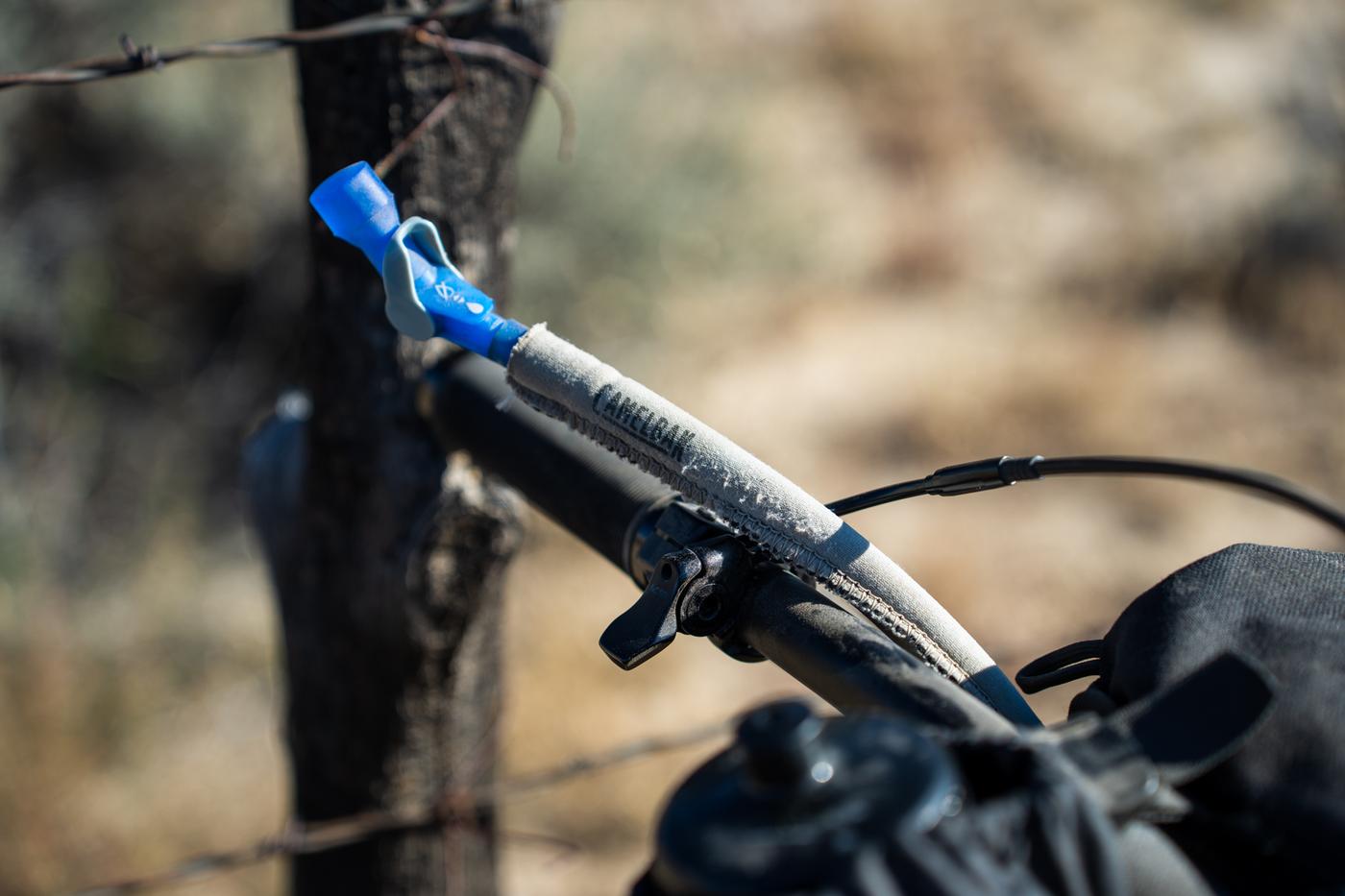 Now, onto the most important detail of any bike review: The Dropper Remote. I’ve been blessed to ride many remotes throughout my days, and without a doubt, the KS remote is the absolute worst of them all. I mean, sure, it was one of the original remote designs, but that doesn’t mean it isn’t the most un-ergonomic and least comfortable remote out there.

Consumer, replace this small part immediately or forever add 2 seconds to your DH times as you fiddle with the remote during each use. Functionally, the dropper works well enough, especially when considering that my saddle bag was carrying two jackets at most times. 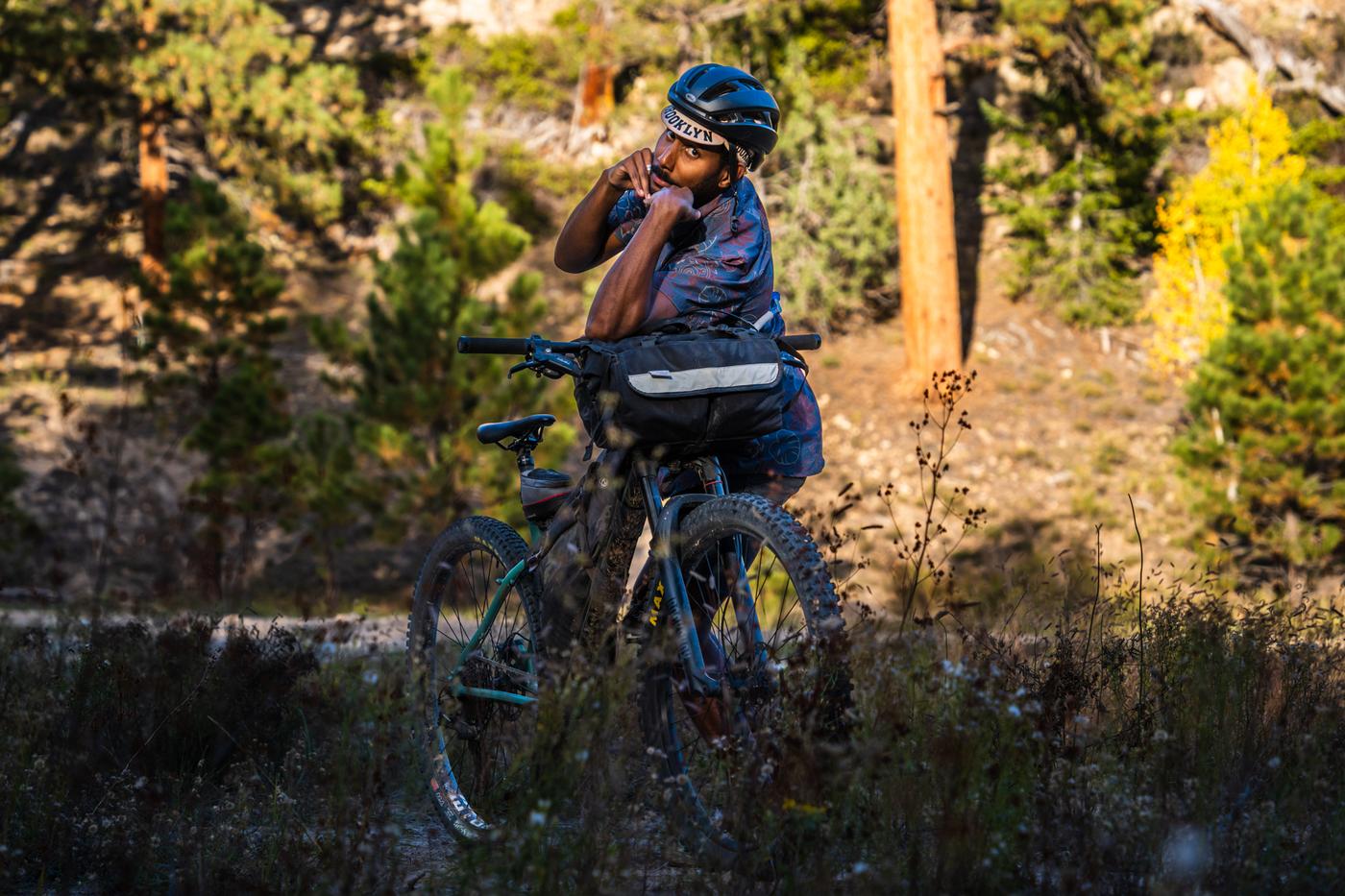 So what is the Bombtrack Cale AL? It’s capable, reliable, and uncomplicated. It’s a mountain bike that rides like a mountain bike and gives you an ever smoother ride when loaded down. This is a bike I would recommend for anyone looking to get into mountain biking or off-road touring. It’s not necessarily your “next” mountain bike, but it makes for a great “first” mountain bike.

The Pro’s Closet is both a seller and re-seller of Bombtrack bikes and loaned this Cale AL to Bryan for a review. If you’re interested in exploring the current Bombtrack collection at TPC, click here.