Towering over Flagstaff and the surrounding area, the series of mountain summits comprising what are contemporarily referred to as “San Francisco Peaks,” or just “The Peaks,” have held spiritual and cultural significance since long before Spanish colonists arrived and began assigning names to geologic formations.

Approaching the visually remarkable peaks from every direction, and upon further inspection of their abundant natural resources, it is not difficult to imagine why the once nearly 16,000 ft volcanic massif has been held to such individualized prominence by many of the indigenous people inhabiting what is now the American Southwest. While The Peaks continue to attract visitors of all sorts, the more recent history of the area can be interpreted and experienced through the physical remnants of water and lumber extraction, wildfire mitigation, grazing, and recreation (just to name a few) that have impacted mountain landscape over the past 100-ish years. Navigating the roads and trails that meander in and around the mountain landscape on a loaded bike is a great way to take it all in. During the era of Covid-19 and in the midst of a summer full of canceled travel, a text from my buddy Bryan exclaiming: “I’m clear – let’s go!” was some of the best news I’d received in months. At this point, I’ve thrown out much hope of any sort of substantial travel plans or rendezvous with friends outside of a tight circle I’ve kept since the pandemic began. Instead, I’ve focused on low-key summer adventures with my kids, many solo rides, and picking up forgotten hobbies like medium format photography. But the prospect of pulling together a quick, light, and local bikepack with a small crew taking various safety precautions seemed more appealing than ever. 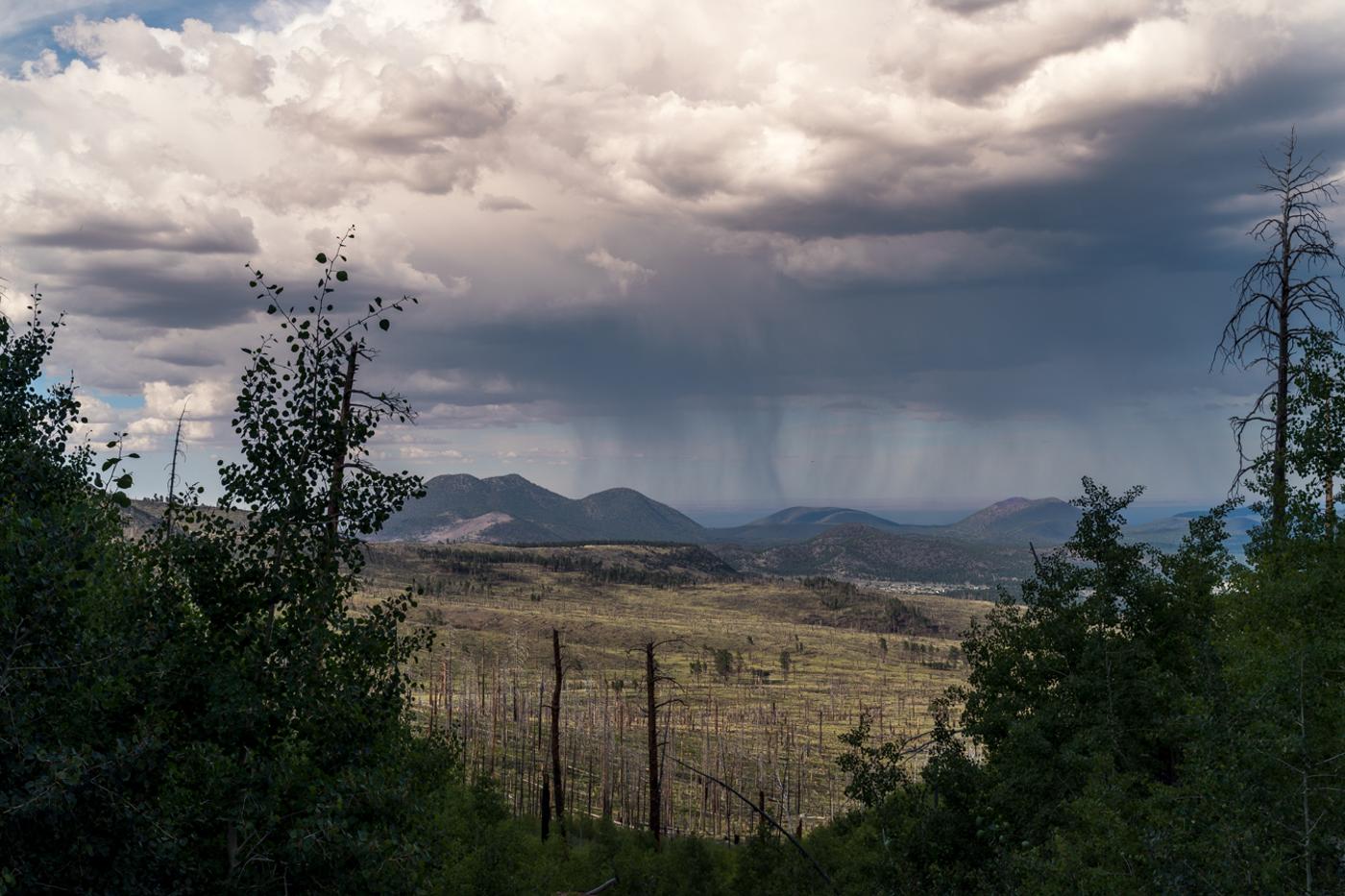 To escape some of the hottest summer days in Phoenix this year, my family and I have been hunkering down in a cabin just south of Flagstaff. During my time here, a couple of local friends have guided me around popular trail systems, primarily the classics along Schultz Road, Mt. Elden, and lower elevation segments of the Arizona Trail. The highlight, though, was shuttling the absolutely epic “San Francisco Peaks” section of the AZT that drops from FSR 418, through Snowbowl, down to the Schulz trail system, and back to town in the middle of a monsoon storm. My first time riding it, in perfectly damp conditions, I was blown away by it’s quality and diversity. Nick Smolinske of Rogue Panda Designs had suggested we link up a few roads and trails to ride around the peaks together while I was in town, but he’s been busy at his shop and unable to pull away. When I heard from Bryan that he would be passing through the area from Phoenix, had just tested negative for Covid-19 (I had also just tested negative), and had time for a ride along with our local buddy Shawn, we decided to take Nick’s idea and run with it. Carving up the 60 mile “Around the Peaks” route – with 5,700’ of elevation gain – into a fast-paced S24O (sub-24 hour) overnighter, finishing on the AZT segment that impressed me just days prior, sounded like a great idea. The route would essentially link up much of the excellent singletrack I’d been riding, with a sampling of Northern Arizona’s most primo dirt roads, and a night out under the stars for good measure. We departed from Shawn’s house in the northern neighborhoods of Flagstaff around 2:00 p.m. on a Friday. Our first stop was the Schultz Creek parking lot where a minor mechanical held us up a bit and tempered some of our early ride excitement. Once rolling again, we headed up Schultz Creek Trail to avoid riding Schultz Road that, by Friday afternoon, was becoming inundated with dust clouds. After about four miles of climbing we reached Schultz Tank at the intersection of Schultz Pass Road for a short snack break before the long climb up Waterline Road. A left turn after a quick spin down Schutz Pass put us on Waterline Road and the incline was immediately noticeable. Having just driven from Phoenix’s much lower altitude earlier in the day, the steep change in elevation on the way up was not lost on Bryan. A highlight of the first day, Waterline Road climbs the eastern flanks of The Peaks for about fifteen miles with nearly 2,500 feet of elevation gain. The road is the primary access route to pumps near the Inner Basin that draw water from an aquifer deep in the caldera to fill much of Flagstaff’s water supply. Once we ascended above the ponderosa pine and mixed coniferous forests, views opened up as we traversed through the Schultz Fire burn zone that scorched 15,000 acres back in 2010. At various points along the road, Shawn pointed out the area to the east where he grew up and beyond to the craters, cinder cones, and painted desert that define the horizon. Looking at the narrow and sustained grade of the road, steep drainages, and varied rock formations, Shawn also shared stories of how his dad – a longtime employee of the Flagstaff Streets Dept – drove a grader and played a critical role in maintaining the road’s profile over the years. With sustained spectacular views to the north and east, we continued on Waterline Road past the Lockett Meadow trailhead to check out the Forest Service buildings of the Inner Basin area that are used during winter to measure snow levels. Then, backtracking about one mile, we dropped into the aspen groves of Inner Basin Trail that eventually put us at Lockett Meadow. Akin to the tight switchbacks and aspen groves of the initial portion of Moab’s Whole Enchilada from Burro Pass, this section of trail had us hooting while trying to keep our loaded bikes from blowing out the loose and tight corners. Once the trail entered Lockett Meadow campground, we were treated to a stunning perspective looking back up at the mountainside from which we had descended. By then it was around 7:00 p.m. so we continued on toward FSR 418, which is where we planned to make camp for the night. The views continued to impress as we stopped a few times for photo opportunities along the fast and winding FSR 552 and watched one of the best sunsets I’ve seen in a while burn against distant storm clouds for what seemed like forever. 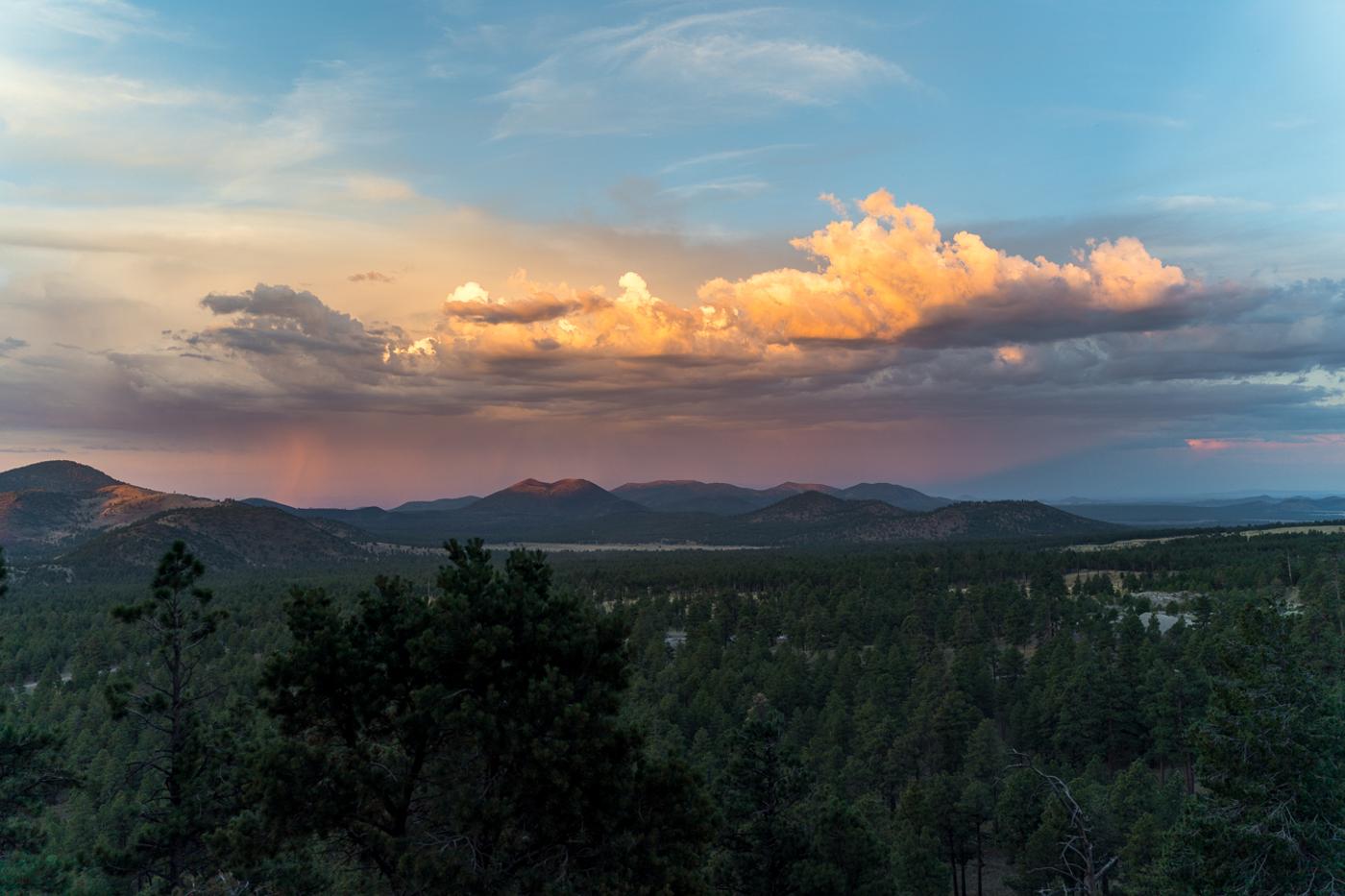 On to FSR 418 as the sun tucked behind the mountains to the west, we found camp a few miles in. We took advantage of the last few minutes of ambient light to set up sleeping accommodations, eat some semblance of dinner (Bryan’s self-heating MRE putting my tuna packets to shame), and reflect on what ended up being a much more demanding ride than originally expected. As the stars began to light up the night sky, Bryan ventured to his hammock hoping to maximize his sleep and acclimate a bit more overnight. Shawn and I stayed up a while longer to make use of the tripod I had stowed away in my frame bag to photograph the spectacular Milky Way core through the infamously clear Northern Arizona skies. 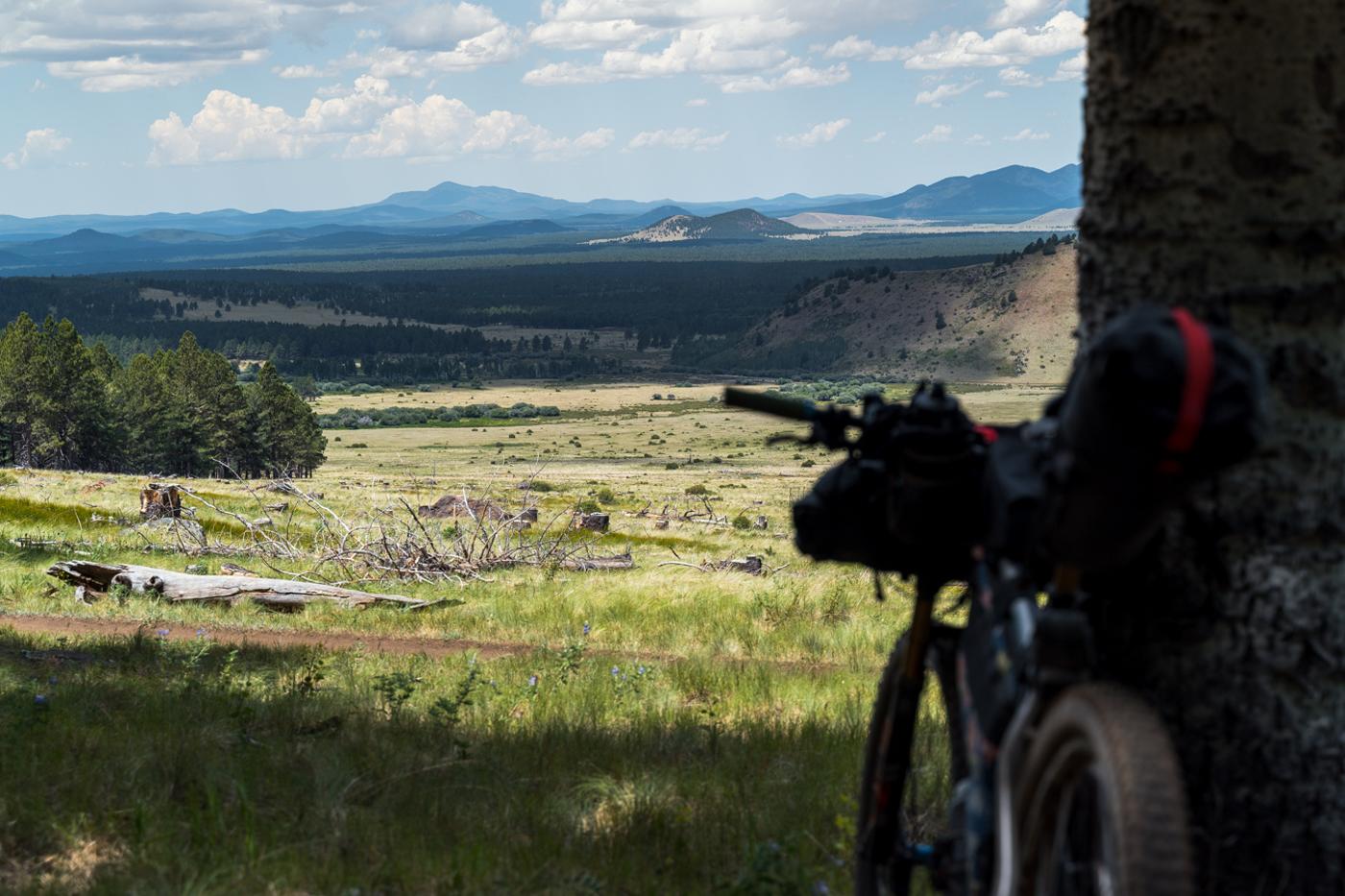 Up with the sun on Saturday morning, we packed quickly and headed back out on FSR 418 to climb nine miles and gain 1,300 feet to the intersection with the AZT. For the first miles of the day, the climbing on FSR 418 was a bit of a rude awakening. Though, thankfully, the early morning auto traffic and subsequent dust was minimal. After a quick snack break at the trailhead, the crescendo of the ride commenced. For the second time in the same week, Shawn and I were back on the San Francisco Peaks section of the AZT, excitedly sharing Bryan’s first experience on the trail, winding through fern-lined aspen groves while catching views of Heart Prairie to the west and Humphrey’s Peak to the northeast. The trail is relatively low on the difficulty scale, making it perfect for a long descent on loaded bikes back down to Schultz Pass. Bryan’s full suspension, however, was able to negotiate the rocky bumps and root gardens a bit better than the hardtails Shawn and I were riding. Around the time the trail transitioned from aspen groves to pine forests, we were all pretty much out of water and pockets of rainstorms began to roll through overhead. We picked up the pace as best we could in an attempt to make it to town before the clouds really opened up. Finishing the day on Dogfood Trail and back through the Schultz Creek parking lot, the storm ramped up and drenched us as we rode Fort Valley Road toward town. Fratelli’s Pizza offered us refuge under a patio canopy as we waited out the storm and enjoyed well-deserved slices with a side of Tower Station tallboys to round out the Flagstaff experience. We arrived back at Shawn’s house at 2:00 p.m. on Saturday; 24 hours after we left the day before. Around the Peaks is a simple but rewarding route, one that many people do in a single big day push. It serves as an ethical overnight option for Flagstaff locals (or interlopers like me) during the pandemic, putting little to no strain on public facilities and with minimal opportunities for close contact with other travelers. Depending on how you plan it out, portions of the route could even make for a stout, but worthwhile, multi-day foray into bikepacking for newbies or as a logistical jumping-off point for longer journeys into the diverse landscapes of Northern Arizona. Just remember to pack more water than you think you’ll need because there is none on the route (except Schultz Tank close to the beginning) and Arizona is hot and dry, even in Flagstaff!