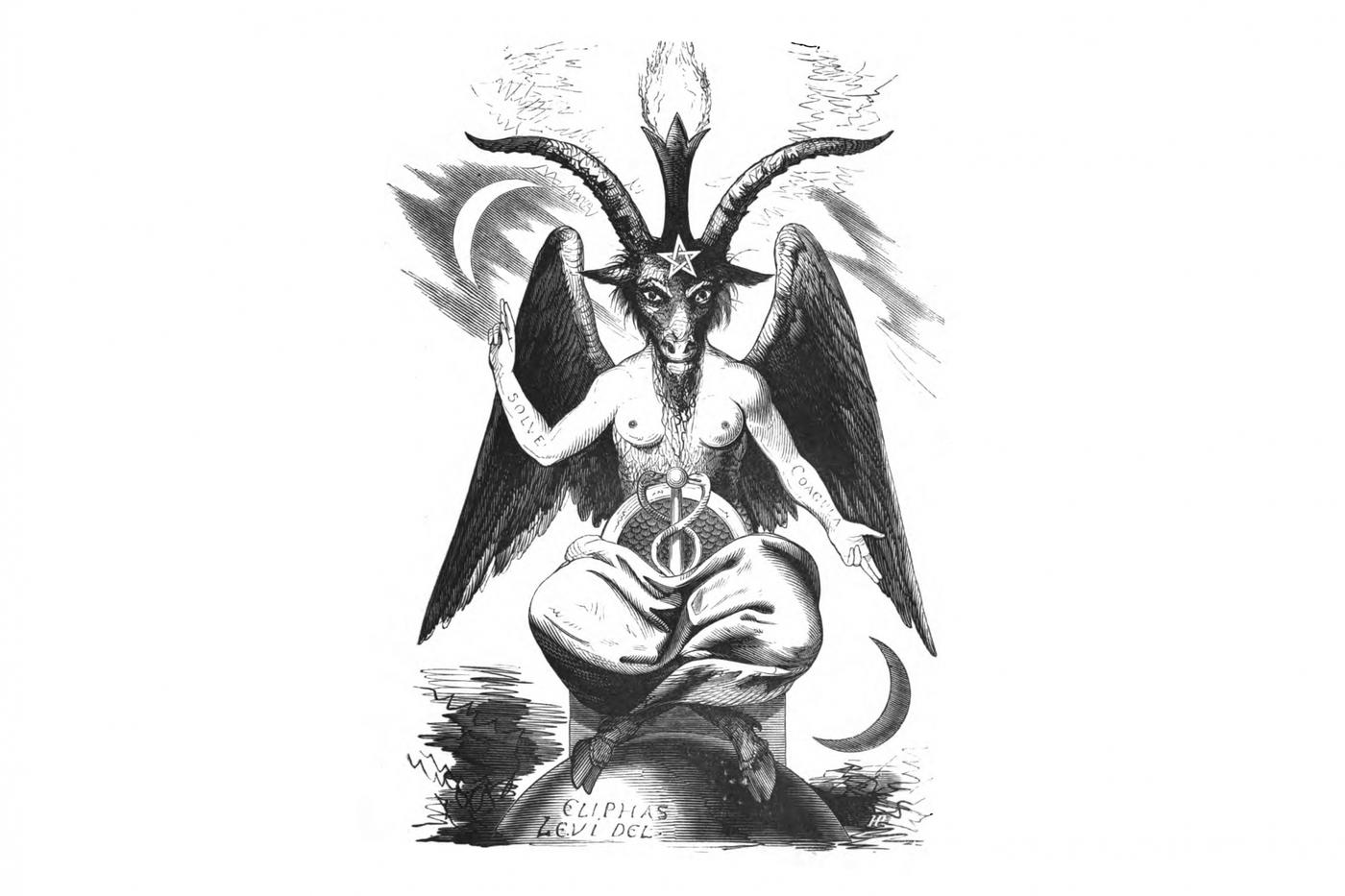 An Introduction to the Baphomet

Balance and equality, or a perfect social order, are a synopsis of an ethos perpetuated by a symbol known as the Baphomet, originally created by the Knights Templar in the early 1300s. This deity represents balance within the universe, a symbiosis between humankind and nature. Much later in the early 1800s, Éliphas Lévi illustrated this once faceless entity in a drawing entitled the “Sabbatic Goat”. In his illustration, Lévi promotes this idea of unity and balance by showing the Baphomet as a half-human and half-animal, male and female, good and evil, and left and right-handed entity. Where this is one, there are both.

Lévi went on to write a manuscript in which he lays out the intention of the illustration:

“This sign expresses the perfect harmony of mercy with justice. His one arm is female, the other male like the ones of the androgyne of Khunrath, the attributes of which we had to unite with those of our goat because he is one and the same symbol. The flame of intelligence shining between his horns is the magic light of the universal balance, the image of the soul elevated above matter, as the flame, whilst being tied to matter, shines above it.”
— Éliphas Lévi, “Dogme et rituel de la haute magie”

I’m writing this introduction because over time, and no thanks to Aleister Crowley, the Baphomet has become a symbol of Satanism, which ruffles the feathers of believers of Christ when the image or even the name pops up. Christians conflate the Baphomet with evil. Yet the initial intention of the deity is, if anything, a statement against the overarching teachings of Christianity, which puts man above nature (and woman) in an all-controlling role. Rather, the Baphomet is about balance and unity. Which begs the question: whose intentions are most applicable to modern society?

What an image to align your bike company with! Naturally, there is much more information about this symbol, how its meaning has been altered, and its role in the occult over the centuries but for the intention of this Shop Visit, this brief is succinct enough. 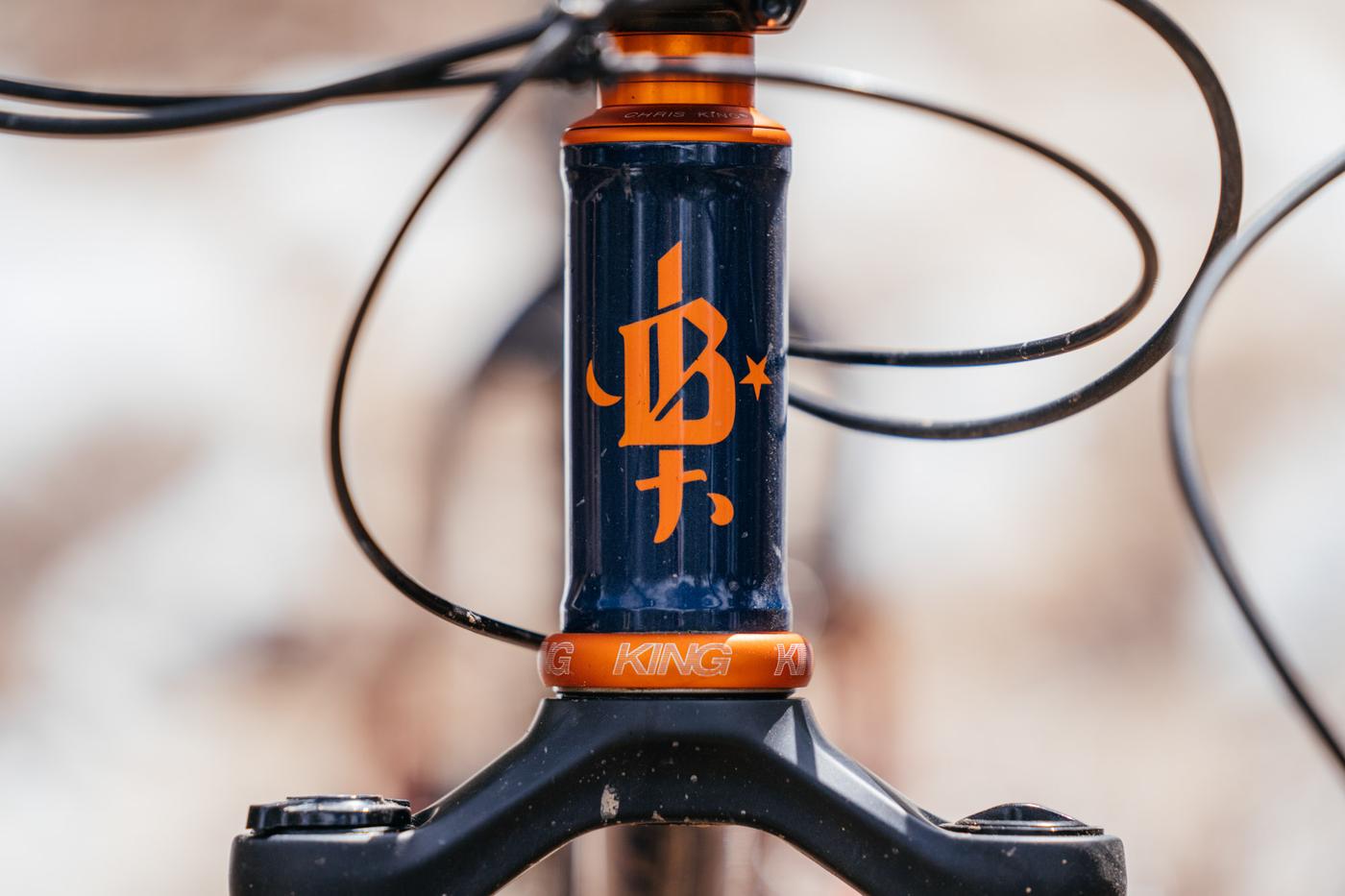 The Story of Baphomet Bicycles

Just north of Santa Fe is the town of Taos, which could really use its own introduction as its history is more complex than anything Lévi could have dreamt up. The land of the Taos Pueblo – who are very much still present today – became inhabited by the Spanish before being controlled by the Mexico and eventually the United States. Taos was a major trade outpost on the Santa Fe Trail which linked up to El Camino Real, the Mexico-controlled trade route from Santa Fe to Mexico City. Due to its role in these trade routes, Taos attracted all sorts of travelers, trades, and cultures.

This is a brief and informal synopsis of the history of Taos. If you’d like a more in-depth, historical account, check out the book Blood and Thunder by Hampton Sides. 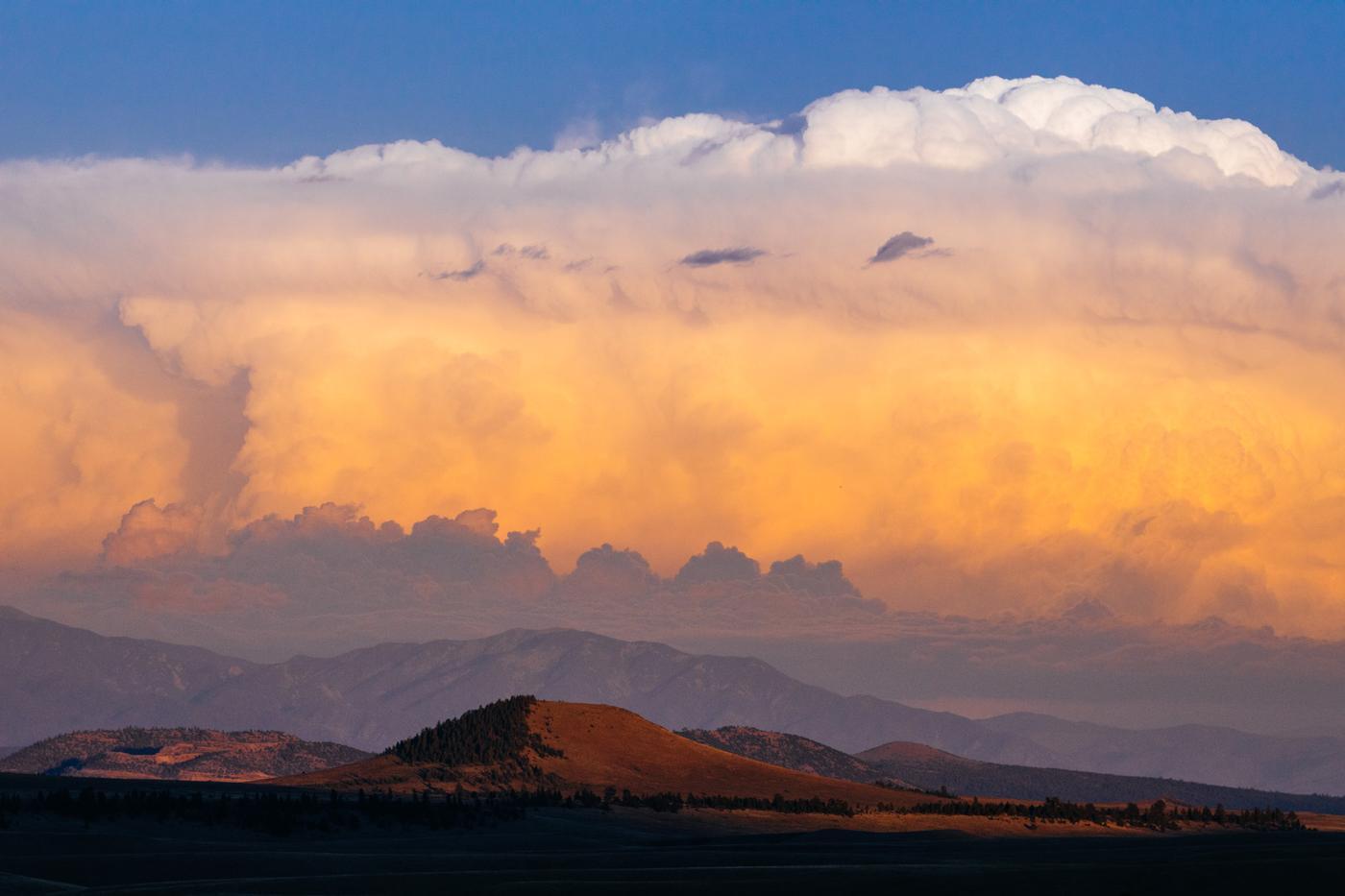 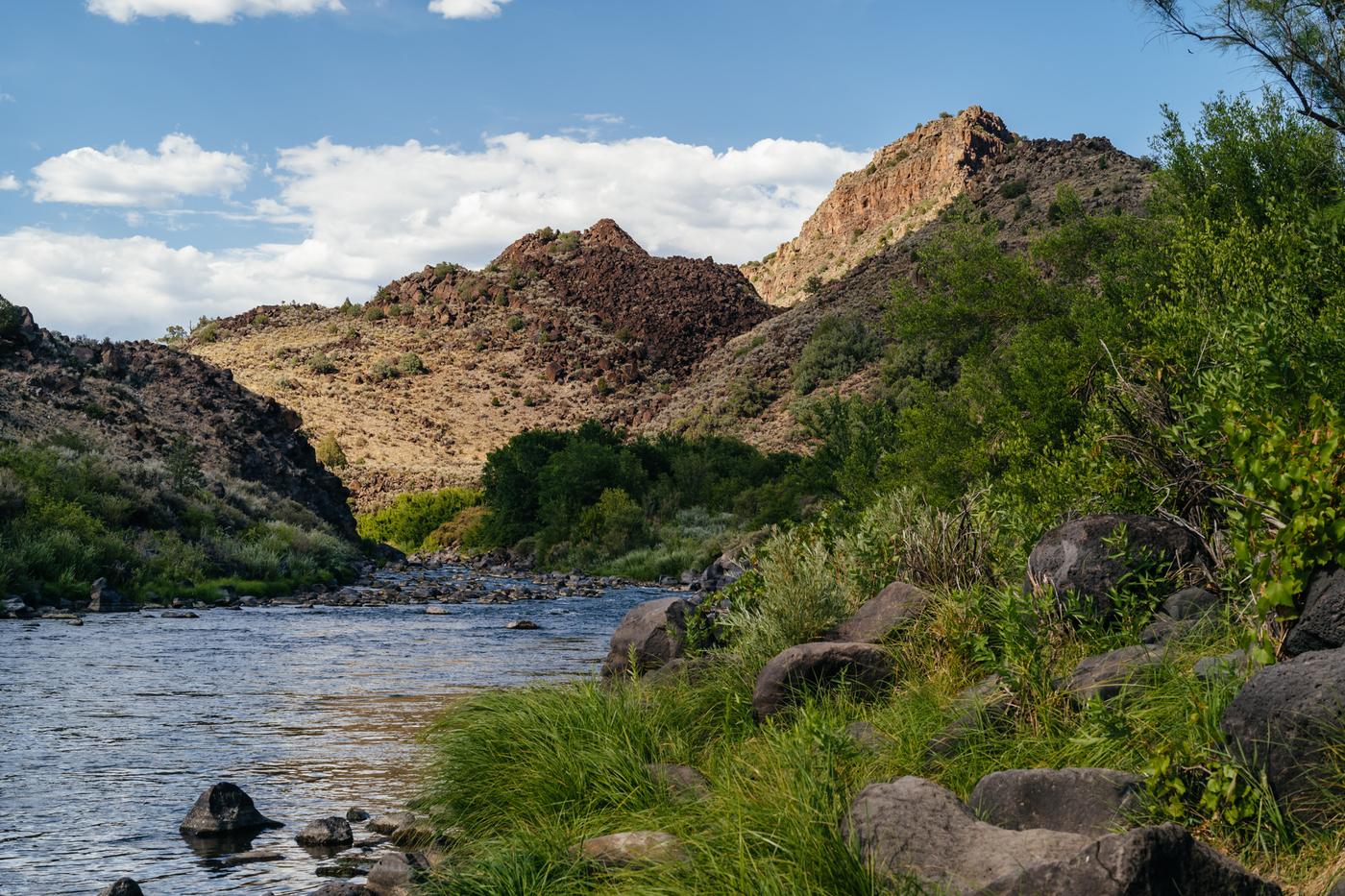 Taos is just under 7,000′ and is nestled in the foothills of the Sangre de Cristo mountains to the east and the Rio Grande gorge to the west. It’s a wonderfully beautiful locale with plenty of riding and enough history to whet your whistle.

Jenn and Dillen moved to the area just last year, sight unseen. They were living in Portland, Oregon, and looking for a change. Jenn is a photographer, specializing in weddings, engagements, and everything in between. Dillen was working for Breadwinner Cycles, where he learned to build bikes under Jacqueline Mautner of Untitled Bicycles. 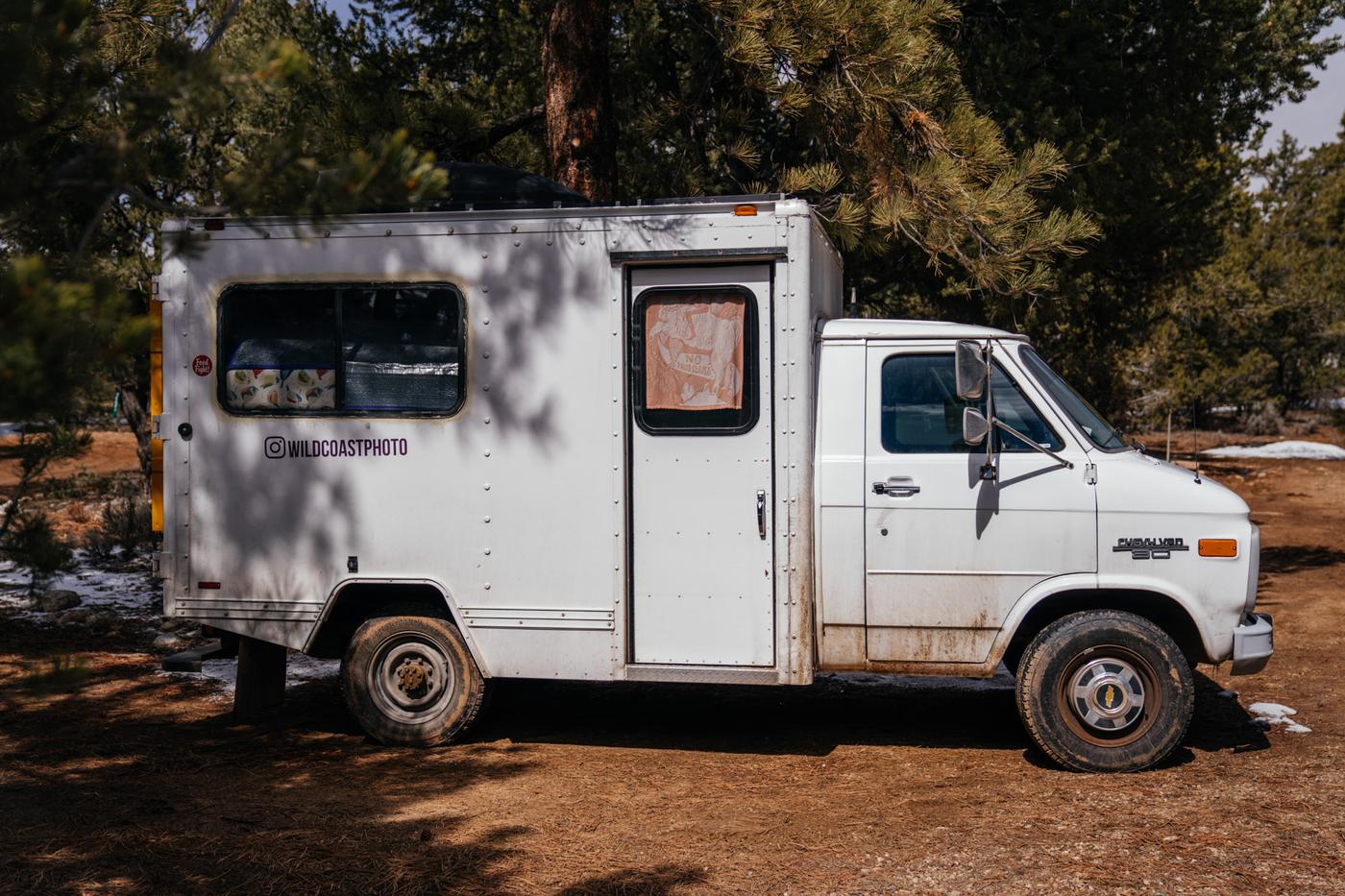 As it happens, Jenn and Dillen packed their lives up into their camper box truck and headed to their new home, not knowing what to expect. Then, Baphomet Bicycles was born.

Now, there’s something underlying this story, that began before Dillen even thought about building frames. So let’s jump back a bit… 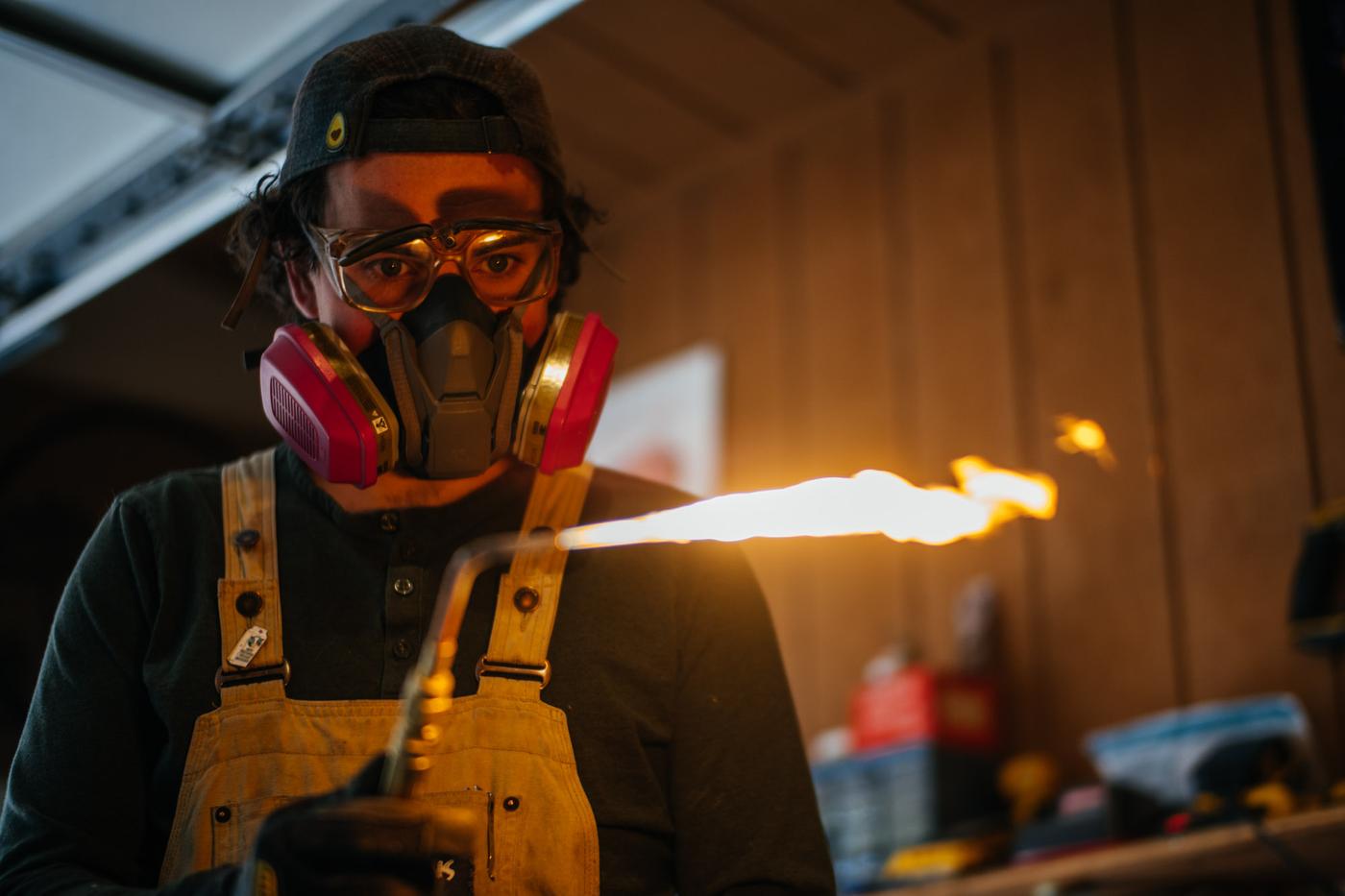 As I pulled up to Jenn and Dillen’s shop, out strolls a scruffy-haired youngster, wearing overalls, covered in patches, with a thick Irish accent. “How’s it going, lad?” he greets me. We get to chatting and I begin to ask him where he’s from, in part inquiring about his thick Irish accent and was surprised to find that he’s from Los Angeles. “What about your parents?” I asked. Both are from the States. “So where’d you pick up that accent?” Little did I know the craziest story ever was about to be dropped in my lap.

When he was a teenager, Dillen was riding his mountain bike in Cherry Canyon, a favorite trail network in the foothills of the San Gabriel Mountains. He got in a wreck, went over the bars, and landed on his head. He was wearing a helmet, luckily. The doctor ruled him as suffering from a minor concussion.

Months and eventually, years passed, yet Dillen was suffering from severe headaches, lack of sleep, and other ailments attributed to brain injury. He finally saw a specialist, who delivered the bad news: “You have about six months to live…” Taking news like that isn’t exactly easy to swallow, so Dillen went on with his life, applying to colleges, and eventually, he got accepted to University College Dublin, where he was immersed in Irish culture, including the music, which he took a liking to. He listened to various artists all day long.

Shortly after moving to Dublin, he suffered from a severe stroke. He woke up, unable to use his vocal cords, and rode his bike to the hospital. When he finally regained the ability to talk, he spoke with an Irish accent. The doctors were stumped. What caused this? Was it linked to Dillen’s love for Irish music? These questions pushed Dillen to get his master’s in Neuroscience.

This has to be one of the wildest stories I’ve ever heard and if you want to hear more for yourself, check out the podcast episode on him at We Got to Hang Out. Throughout all these conversations, my mind was trying to connect the dots to this intriguing person’s life. Framebuilders often follow a similar trajectory for how they got into gluing metal tubes together but I had never heard of a character development arch as intriguing as this. There was so much going on with this Shop Visit and I was quickly becoming overwhelmed by the whole story. Did I mention he raced UCI ‘cross in 2016 at the age of 18 for Kona? Yeah. Wild.

Once Dillen and I cut through the muck of 2020 and paraphrased it with an equally somber joint concession: that was rough, but we’re still here – we began to really vibe. I was curious what made someone so drawn to occult iconography of the 1800s. How was it tied into cycling? I mean, I had a good idea, but I wanted to hear it from Dillen. 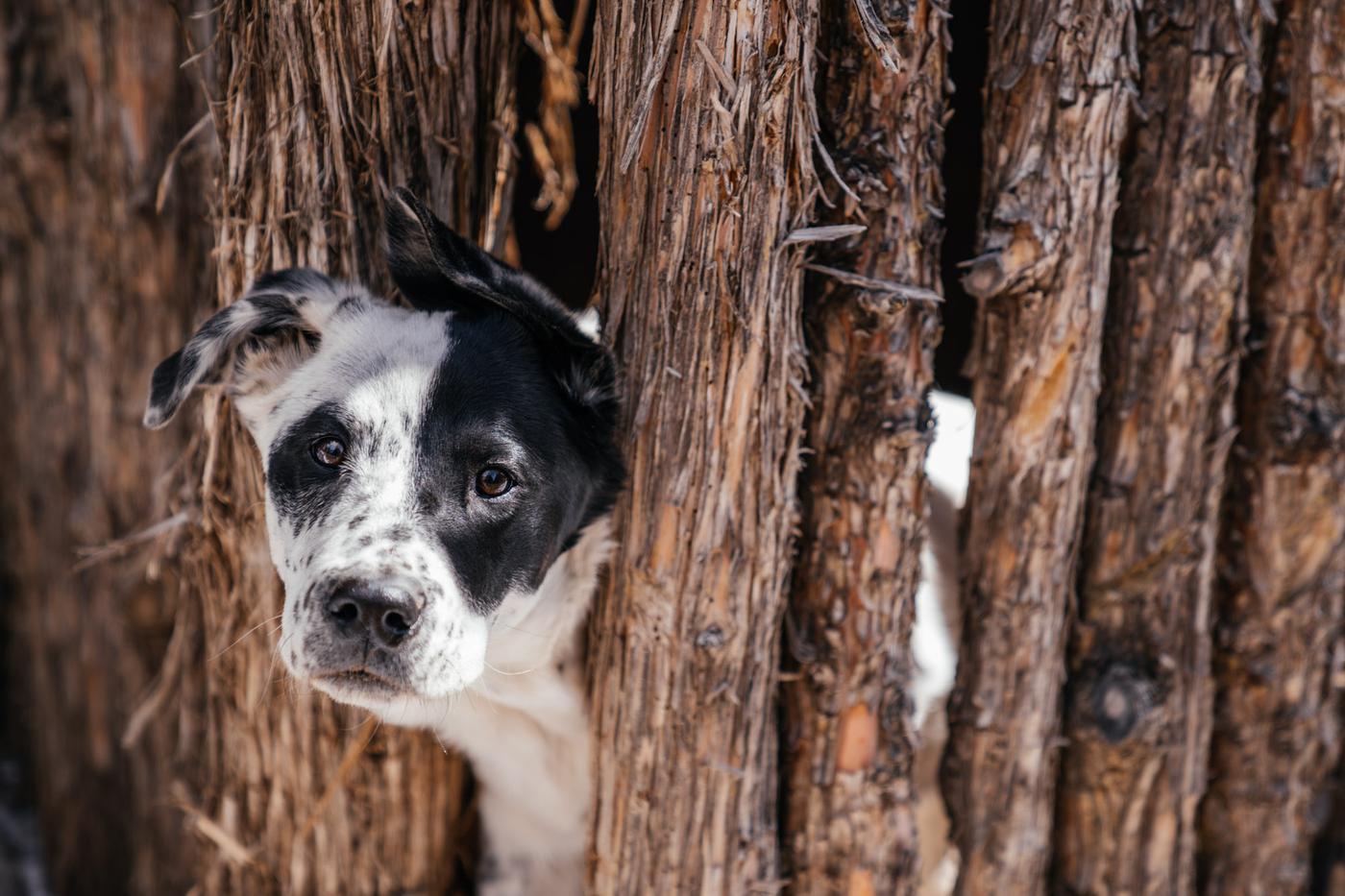 Throughout the afternoon, with mild interruptions by his rescue pup, Pepper (Dillen works at an animal shelter in his free time), and the excitement of recent snowfall, I began to gain a perspective on Baphomet. Dillen has big aspirations for the cycling industry. He’s got hopes and dreams of it becoming more environmentally-conscious, more socially-engaging, and more diverse. There have been lots of wins for these goals over the past few years, and plenty of reminders that we have a long way to go.

Dillen’s biggest qualms beyond social equality in cycling are with excess packaging, plastics, and the disposable nature of carbon fiber frames and components. He supports companies that have acknowledged these shortfalls and are pushing to make the industry more environmentally conscious. Another big issue is the nature in which a lot of bikes and components are made with cheap labor overseas. This is something nearly impossible to avoid, yet he is still conscious of it. 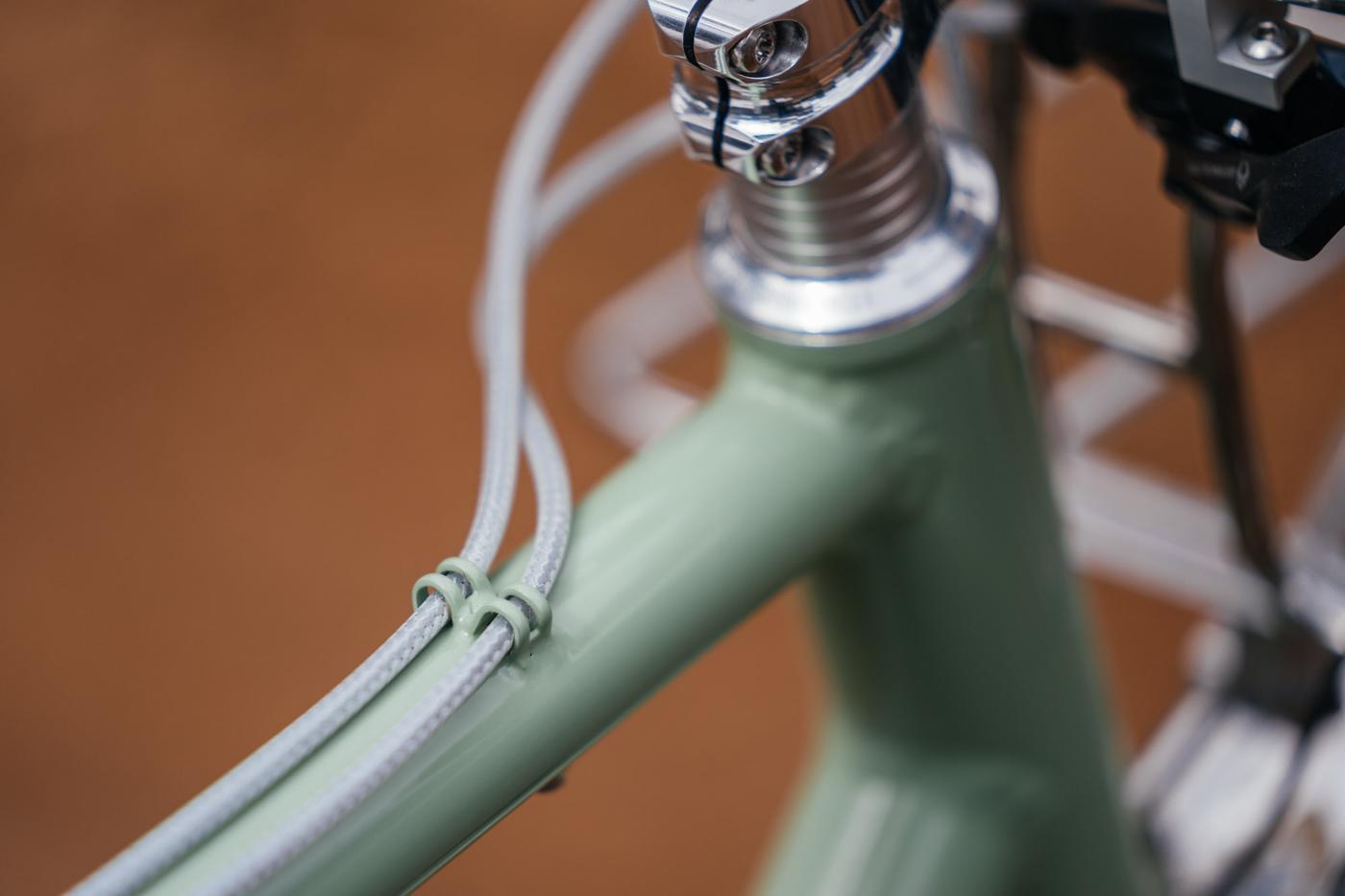 Some of the ways he’s implemented these ideologies: using steel cable loops on his bikes, eliminating the need for zip ties, and he is vegan, so he doesn’t like using animal products in his builds. He also doesn’t ride carbon wheels and tries to not use carbon fiber as much as possible. Jenn and Dillen’s home is even solar-powered – yet not from panels on their property. When they tried to get a solar array, they were denied as Taos already creates enough energy as a town to fully power their residential grid. He also donates 50% of frame sales to a handful of organizations fighting for equality.

We spoke about various subjects relating to this notion of originality within the framebuilding world, hemming and hawing about the line between bespoke and utilitarian. Dillen doesn’t file down his fillets. For him, bikes are tools, and his raw brazing reflects that. We joked about chunky, stamped dropouts, cast lug work, and other faux ornamental details of British framebuilding. A lot of British frames with Nervex lugs are simply brazed and painted, without any finishing or thinning of the lugs. This raw, unfinished ornamentation always fascinated me. Was it art nouveau or something else entirely? Regardless, I can appreciate this mentality.

After documenting three of Dillen’s bikes, I closed up my camera case and headed home, with my mind spinning, trying to weave a narrative from the day’s events. Never before have I been so moved by what typically is a very straight-forward experience. This was my first framebuilder Shop Visit of 2021 and already, it felt like it would be one of my most memorable afternoons this year. 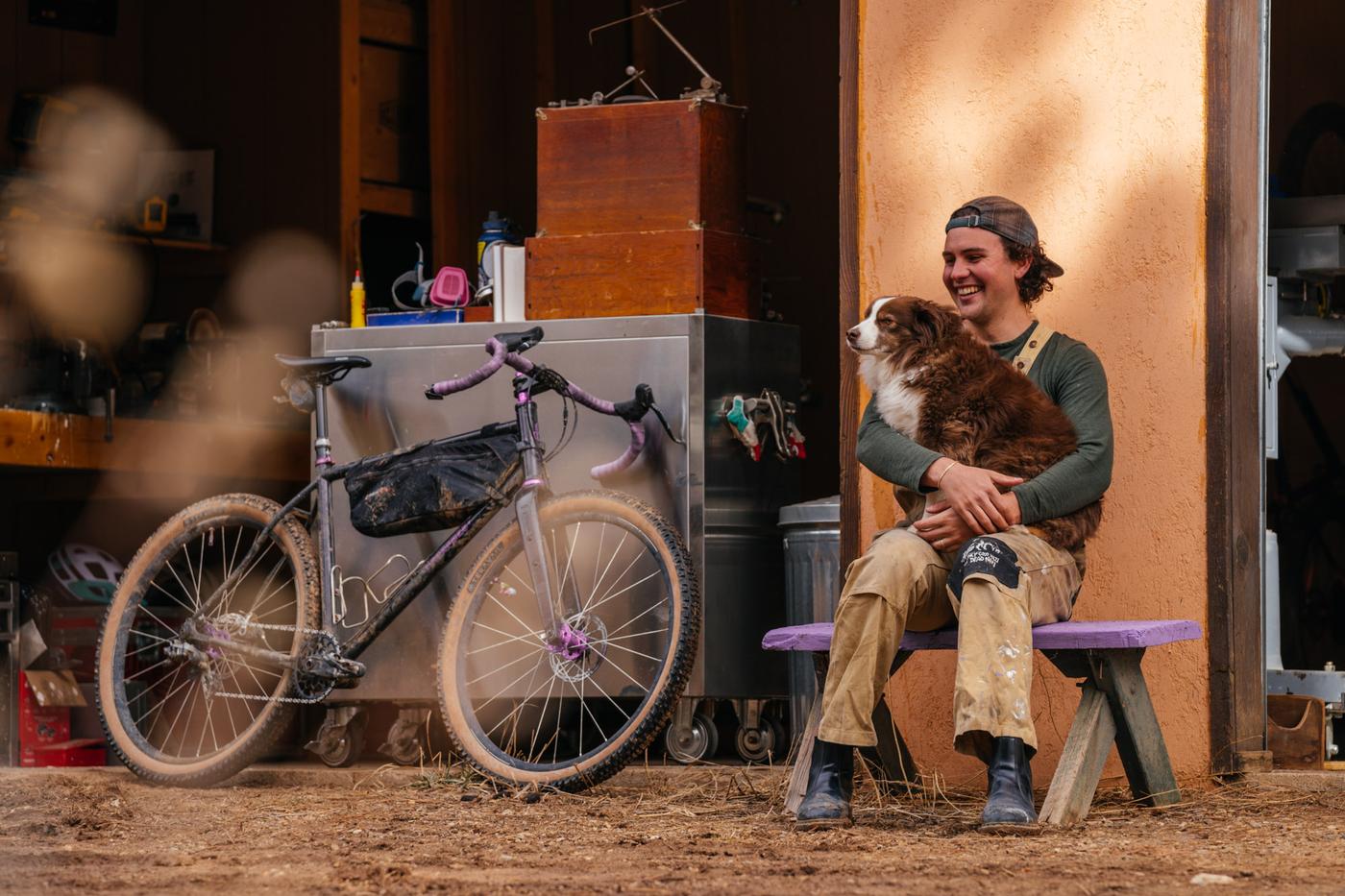 Dillen’s intent is very progressive and as I backed out of his muddy driveway, I reached my head out of the window and said something along the lines of “Thanks, I needed that.” I can’t help but feel a bit of burnout from time to time, so it’s refreshing to meet the next generation of framebuilders in the United States, with their eyes on the prize.

We could all use some balance and perfect social order…

Stay tuned for individual bike galleries of the three steeds featured in this Reportage.