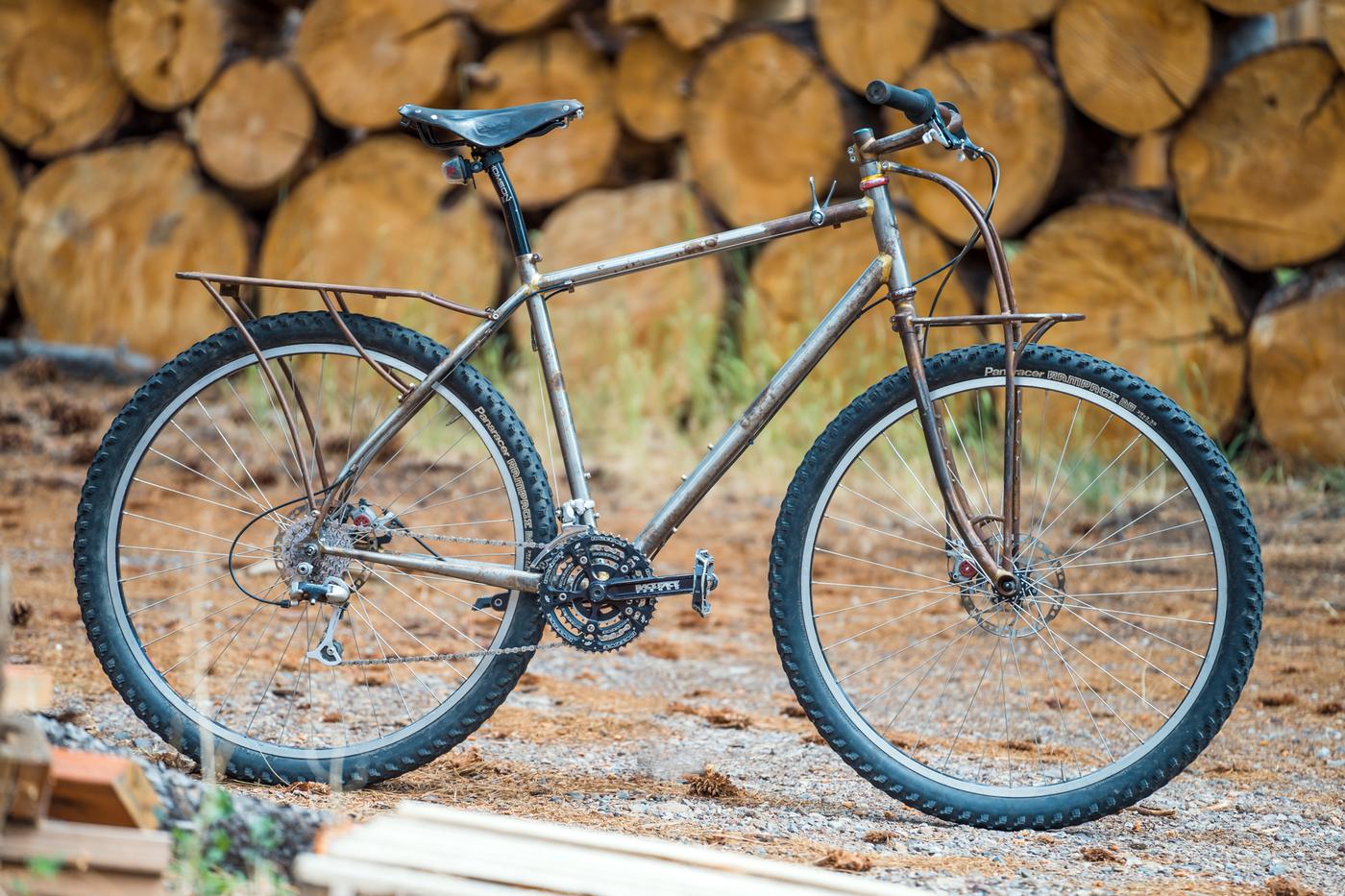 Low and Slack?  No thanks.  I made this bike in 2008 at the UBI Brazing course.  I had just come off a two-week tour from Tucson, AZ to Mexico’s Barrancas del Cobre where the Surly Cross-Check I was riding had officially fallen out of favor.  I wanted to expand on that bike’s mountain bike and touring abilities.  I had never owned a 29er. I liked the rolling inertia of the wheel but felt the ones I had ridden lacked the nimble handling of bikes I was accustomed to in the 26 inch days.  I made it based on a BB drop that somehow figured on a mathematical proportionality to a 26er with a high-ish BB. It became the original high and tight. 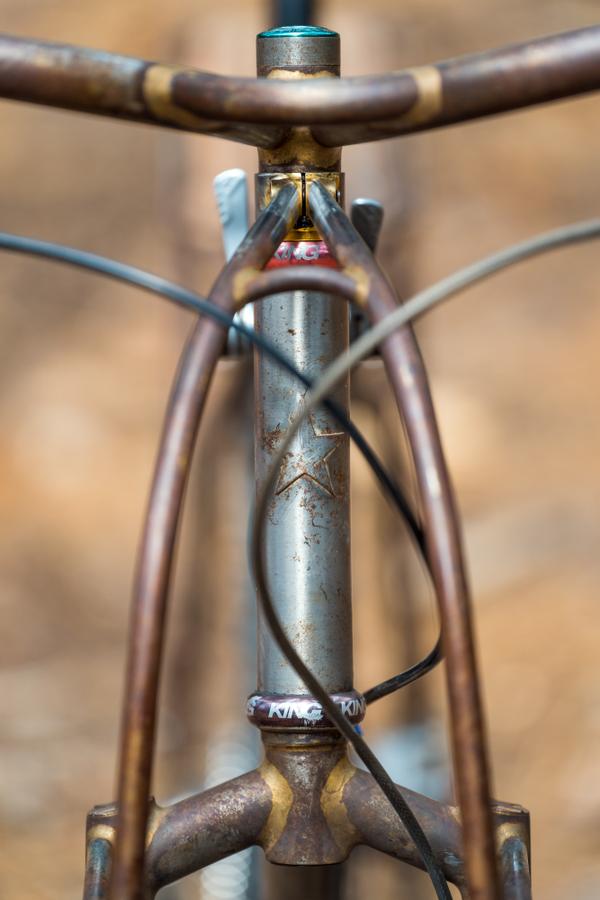 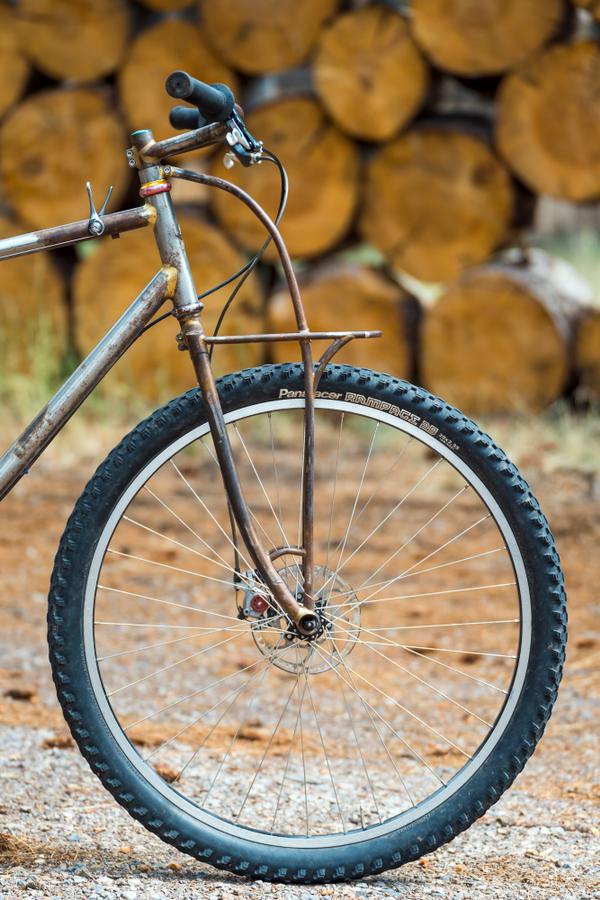 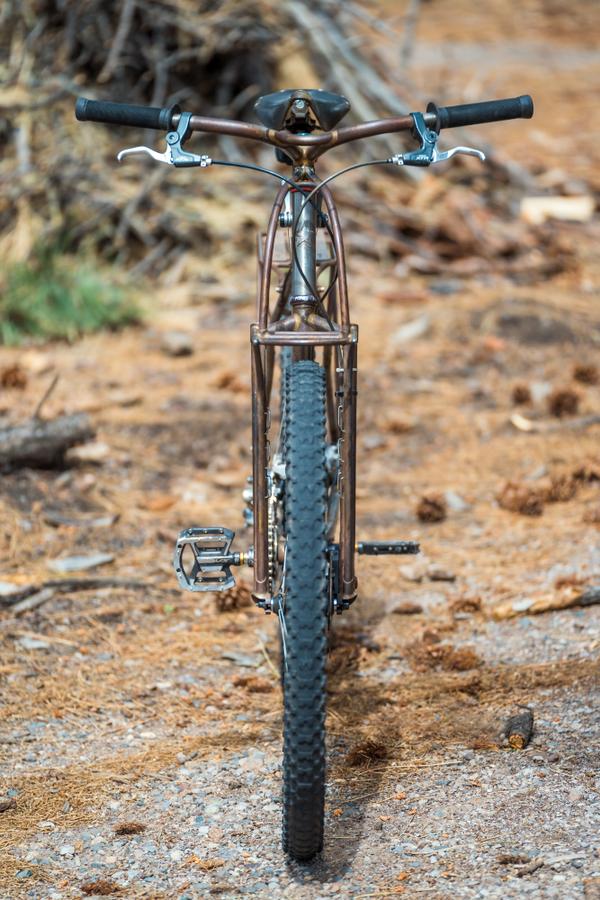 The angles are steep and the fork has an offset and rigidity that’s uncomfortable without a load.  Everything was mitered with a file and built with a minimal understanding of fixturing.  Having built a fair number of bikes since it amazes me how far this one went.  Tours in Baja, an early effort piecing together segments of what has since become the Oregon Timber Trail, White Rim, Colorado Trail.  The term “bikepacking” had yet to enter my realm, and I am still a bit reluctant to embrace it in the present.  I figured I’d ride this bike to trailheads, take my panniers off and make camp, then ride the trails. 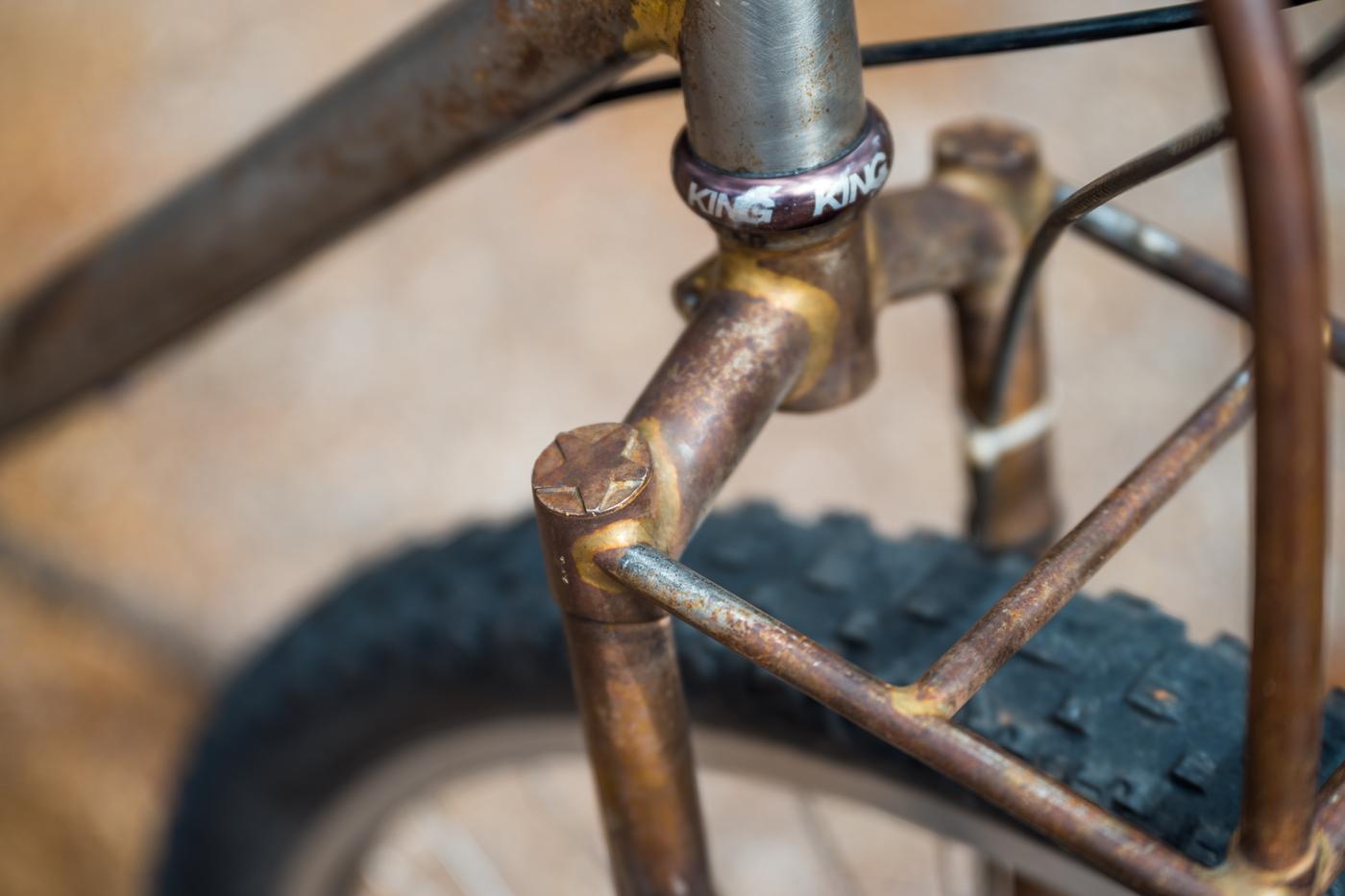 I look at this bike now and realize it’s kind of a POS.  The frame has been repaired at least a handful of times, the top tube is more dented than round, and the brazing questionable at best.  It still rides, but mostly serves commuter duty these days. Somehow, though, it’s always grabbed plenty of attention. 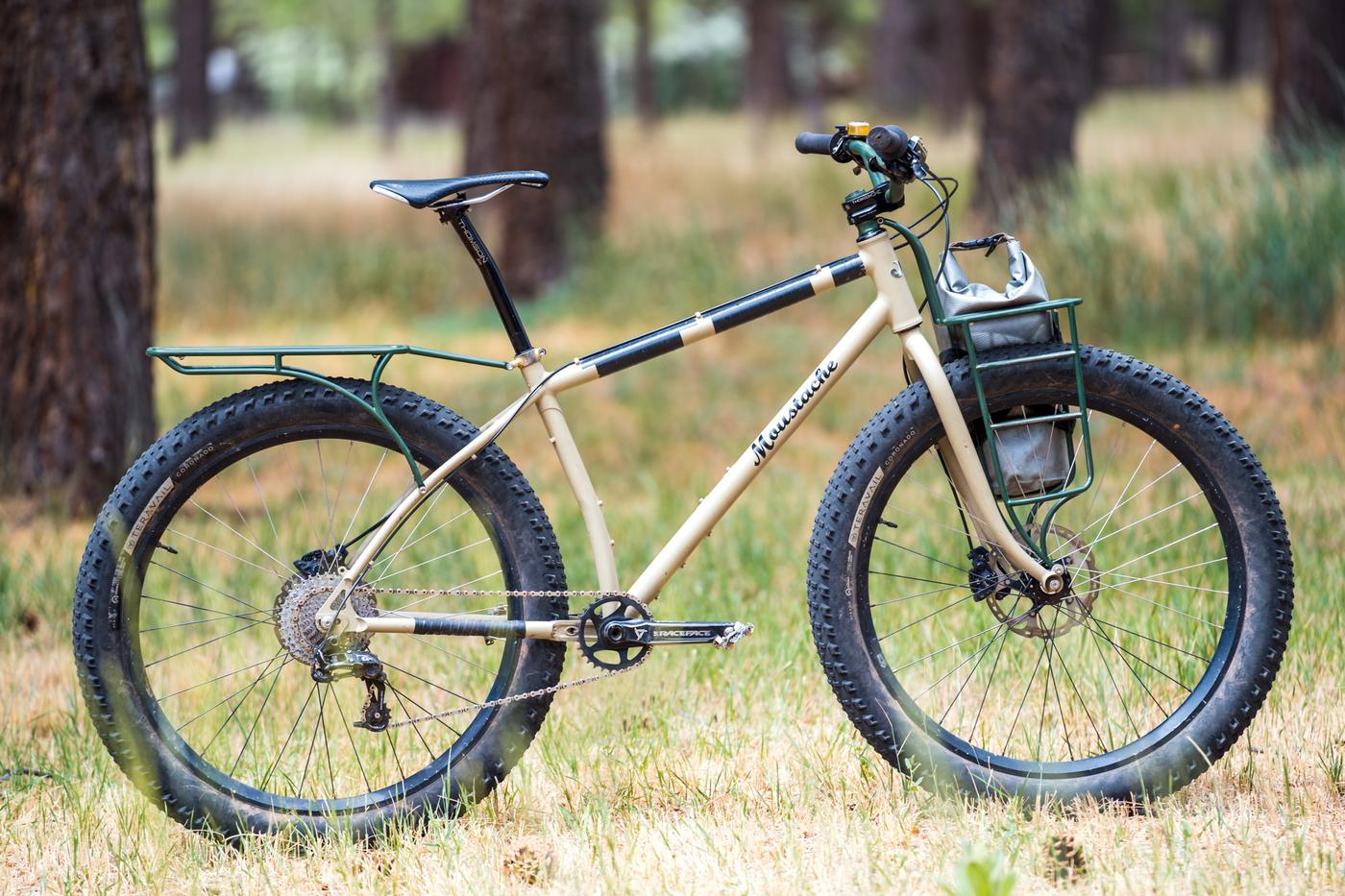 This bike is a bit of an evolution of species from my first frame.  I seem to revisit this concept in some form every now and again as new parts become available that suit the platform, or as my theories need reassessment.  This one was aimed at serving all touring and packing needs as well as being a daily driver Mountain Bike Truck capable of handling all the local trails of Flagstaff and Sedona.  The “Camper Special” concept came from the full-size trucks of the American “Big 3” in the 1970s.  They offered and offered bigger engines and brakes, lower gears, heavier springs, and two-tone paint, and were badged accordingly. 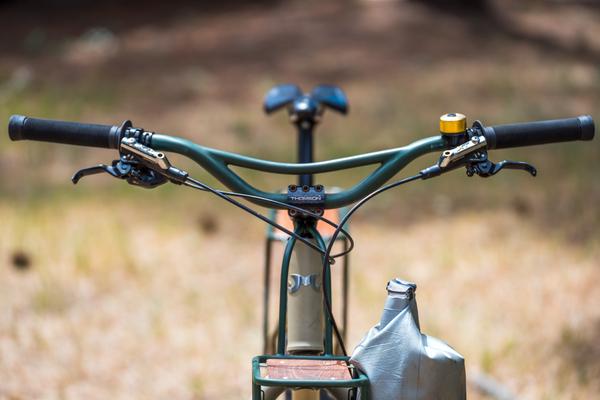 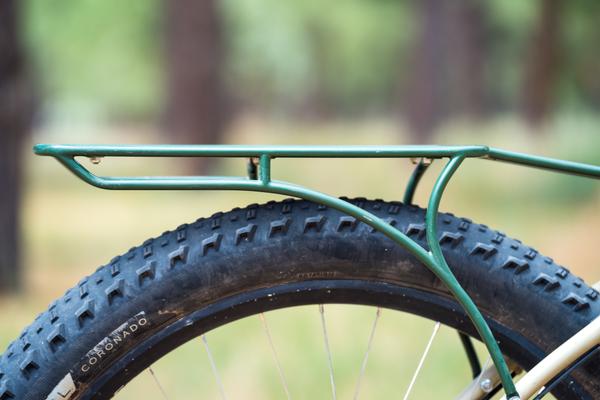 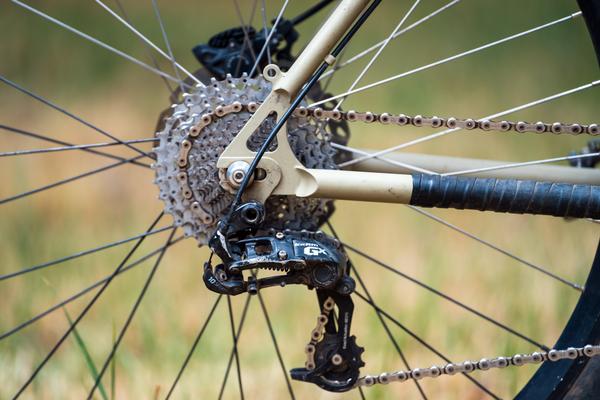 There were always projects of this nature at the powder coat shop I frequent, so I thought it would do their work justice to do a bike in a similar fashion, right down to the wood inlaid racks.  I wanted the build to be as reliable as possible so I started with the best bearing sets at each point.  Hadley hubs, Cane Creek 110 headset, King bottom bracket.  From there I mated tried and true XT Brakes and 10-speed cassette with Sram GX shifters and derailleur. 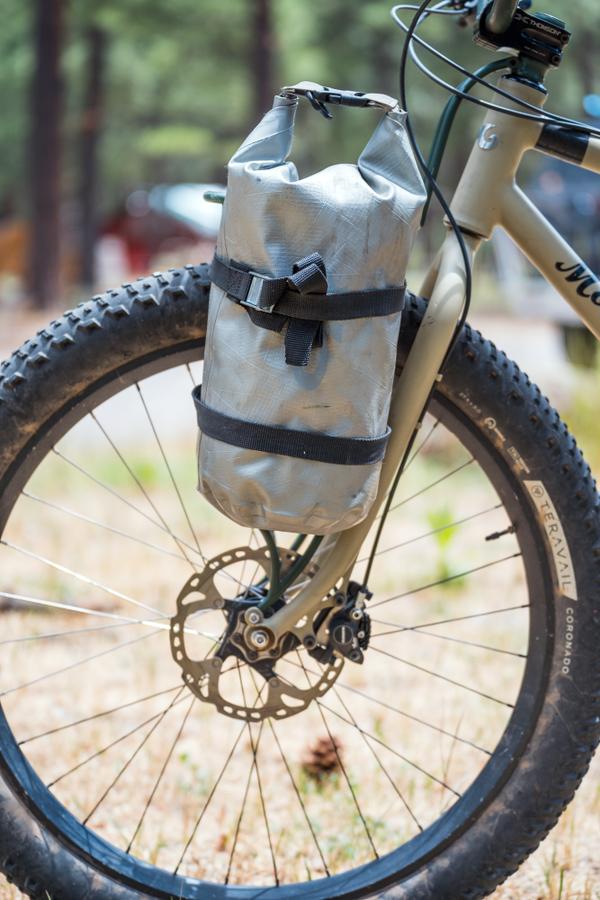 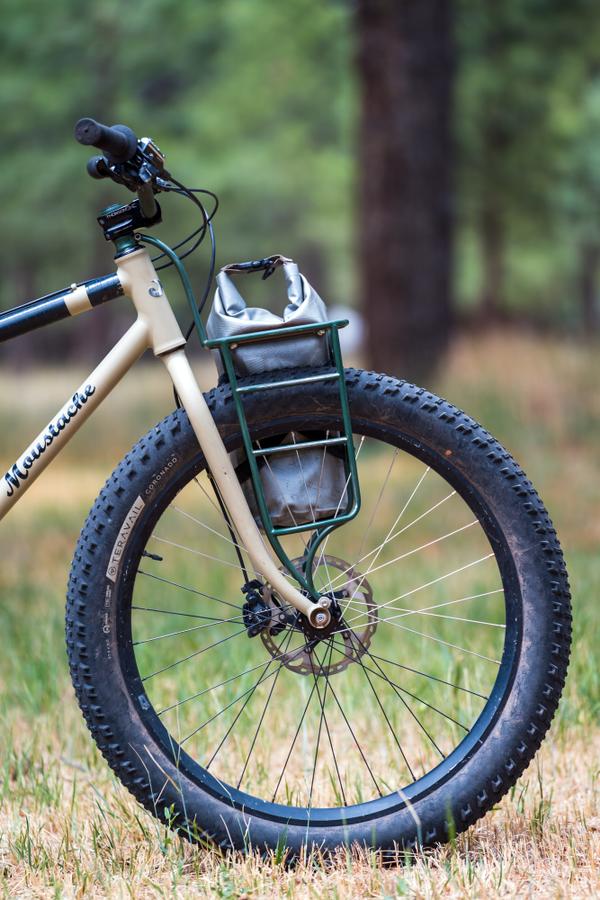 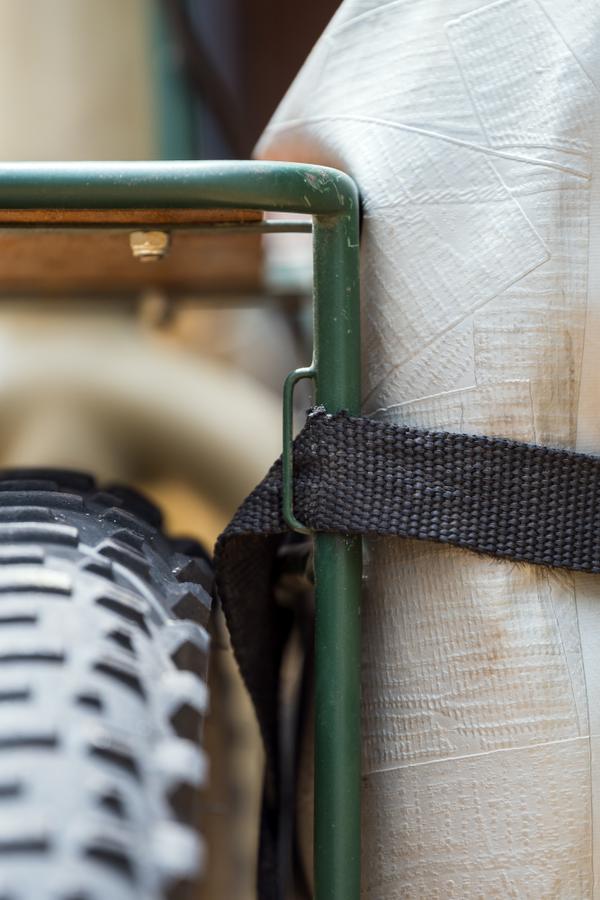 Syntace hoops hold Teravail Coronado 27.5″ x 3.0″ tires.  The touring setup is based around a modular truss rack in the front holding 10L dry bags in place of traditional panniers.  This platform allows for additional storage as unexpected treasures are frequently gathered from the trailside during travel.  A matching rear rack holds the bedroll and allows for still more items to be gathered and lashed.  All said this bike isn’t fast; it isn’t meant to be.  It’s a 9 mile an hour bike.  It’s precise, and it goes slow really well. This one’s designed for all-day comfort and confidence over Arizona’s rockiest dirt roads, and is named after the dory that set the speed record through the Grand Canyon of the Colorado  River. A shop-made “shallow drop” handlebar allows for greater control by confidently placing the hands wide for descending, while also allowing for a shorter stem and longer top tube than traditional dirt drops.  A blend of mountain and cross bike parts adorn this build.  The Box components 11 speed rear cluster provides the range of an average cross 2x setup, while the Sram 42t road crank keeps a happy chain line and narrow q-factor.  I9 keeps the wheels engaged, and WTB keeps the pressure regulated. Stopping is handled by PAUL levers pulling on Yokozuna hydraulic calipers. Well…. This one kind of speaks for itself.

Many thanks to Richard for taking the time to go over each of these builds!