Throw the Parts Bin At It: Morgan's 26+ Surly Pugsley 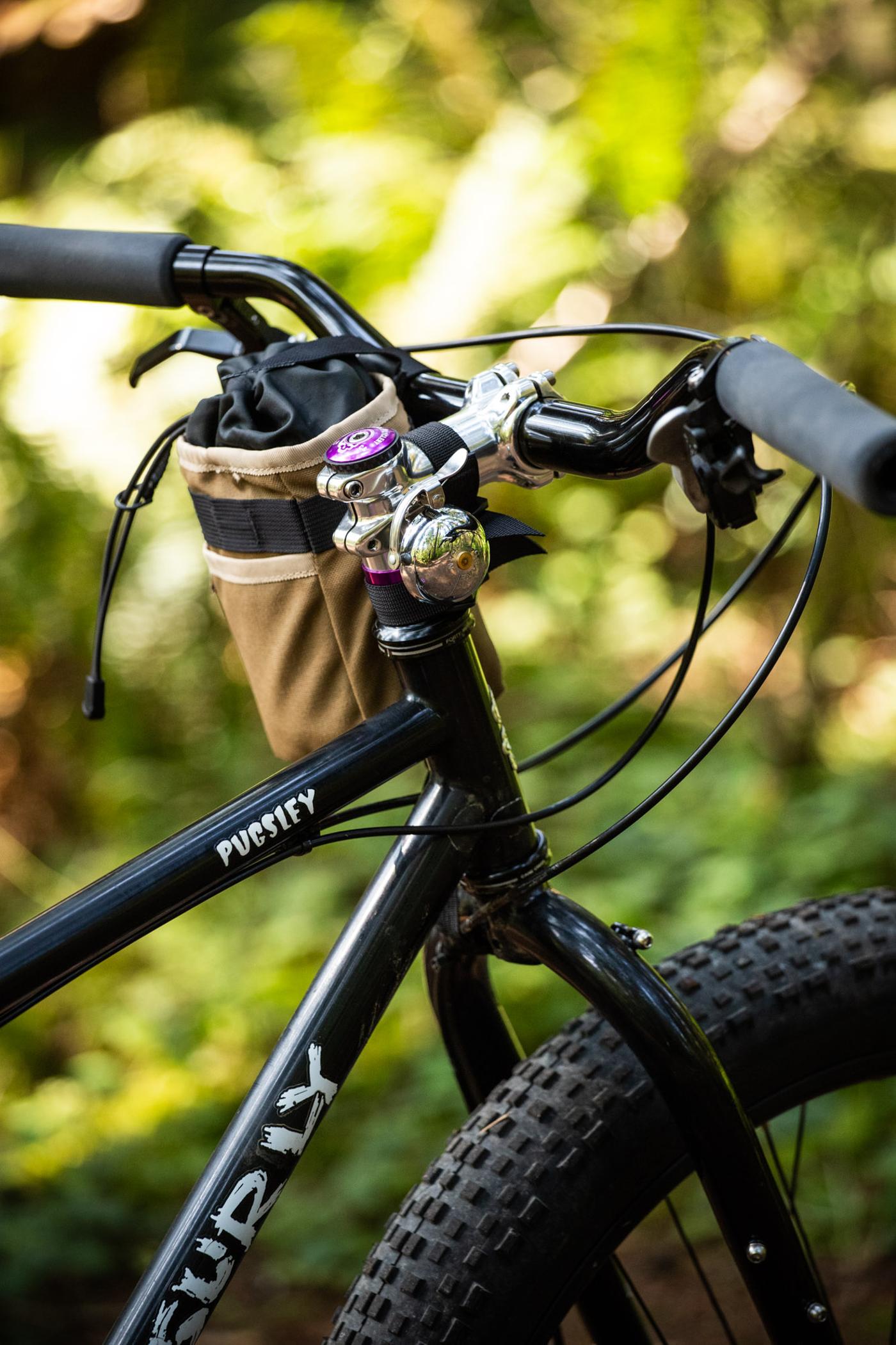 Stephanie started collecting Surly bikes back in 2015. I had reviewed the Ice Cream Truck that year (psst… I just re-uploaded the images into that review) and we got chatting about how we might improve that bike, and added the Wednesday to the fleet. Then came her Straggler, which our friend Andy was content to see living its best life up here in Canada.

My own first Surly turned out to be the Big Easy, which we found so much utility in during the review period, that we decided to buy it. That’s more of a co-ownership, though, since it is actually Stephanie’s size and was always intended as an adaptable family bike. Maybe it actually belongs to Sophia?

So yes, we have seven bikes in the permanent collection, which readers of this site are surely not surprised by, but our neighbours definitely are. With that as a background, how did I end up with a 2013 Pugsley as my first Surly? Wouldn’t I want a Krampus, or a Cross Check, or a Midnight Special, since I really enjoyed that bike? 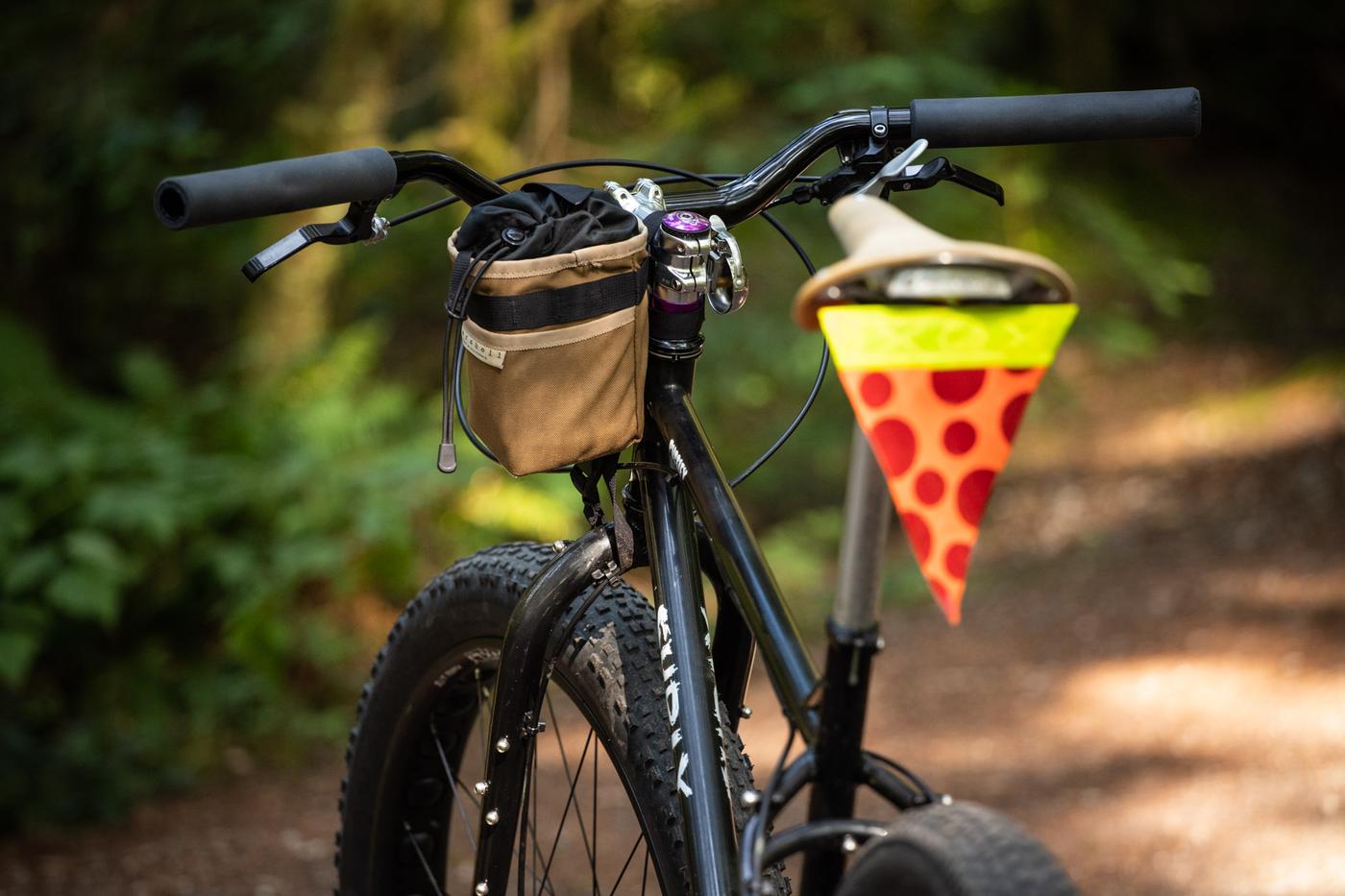 Roll the clock back a few months and our friend Kris reached out to ask if we knew of anyone who’d be interested in his Pugsley. I recalled that he’d ridden this bike to one of our @coffeeoutsideYVR Slow Ride Socials a few months back, and we’d chatted about how he might turn it into a bike that got ridden more than once a year.

Thing is, Kris already has a medium-fast rando bike that he built himself in the two-week course Paul Brodie runs out of a local university. The Pugsley, especially with its 3.8” tires, is squarely in the slow category, more like very slow. Kris just didn’t ride the bike since moving to Vancouver. Like Andy with Stephanie’s Straggler, he just wanted it to live with someone who would use it.

At first I will say that I wasn’t really interested, as my first fat bike experience back in 2014 was on this exact frame size and model of Pugsley, and I’ll tell you what, I wasn’t ready for it. At the time I was reviewing mountain bikes and had very different standards for what a bike should do than I do today. I pretty much hated it. 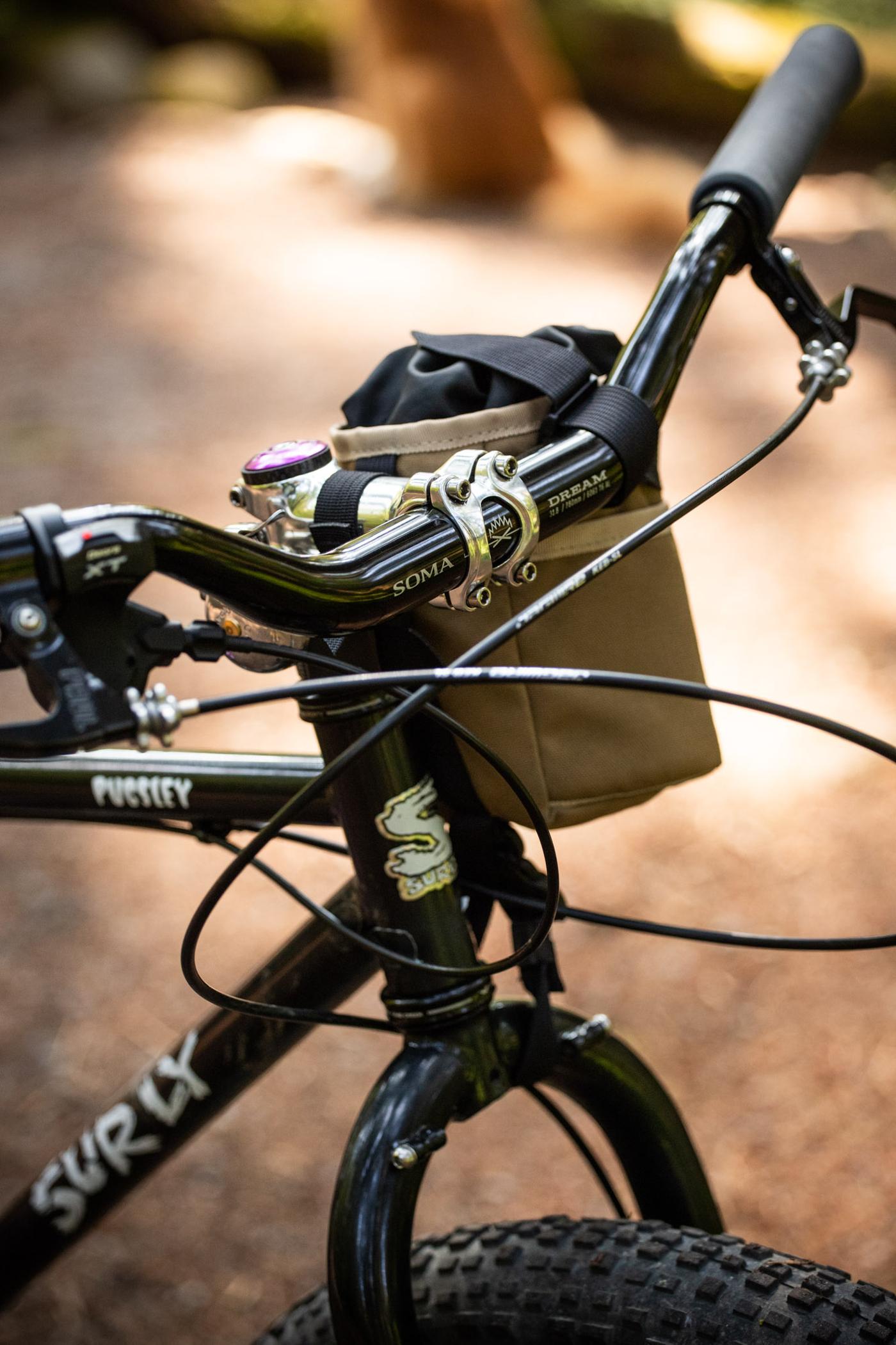 These days my riding is far more varied than the singletrack focus I had back then, and I understand that a bike may not be the best for a particular application, but that doesn’t mean it’s not a great bike. The Pugsley has its roots in Surly’s traveling bikes, and guess what, traveling bikes is kinda my thing now. I ride my rigid-forked Unit on the local trails in jorts and sandals, and don’t give a damn about what my closed-minded former self would say.

But even then, an old Pugsley is a bit of a weird bike. It was never a high performance mountain bike, but then it didn’t claim to be. (Saying that again for 2014 me.) By today’s standards, if you remove the fat tires from the equation, it’s basically a gravel bike. 70.5º head angle, frame reach suitable for drop bars, 55mm bb drop, 135 QR wheels, slack seat angle – oh wait, now it’s even obsolete as a gravel bike.

So when Kris reached out, my initial impression was still clouded with all of that – but in the meantime we have another 26” fat bike converted to 27.5+ in the house, and I’m always looking for the right home for a worthy bike. I didn’t expect myself to be that home, though! 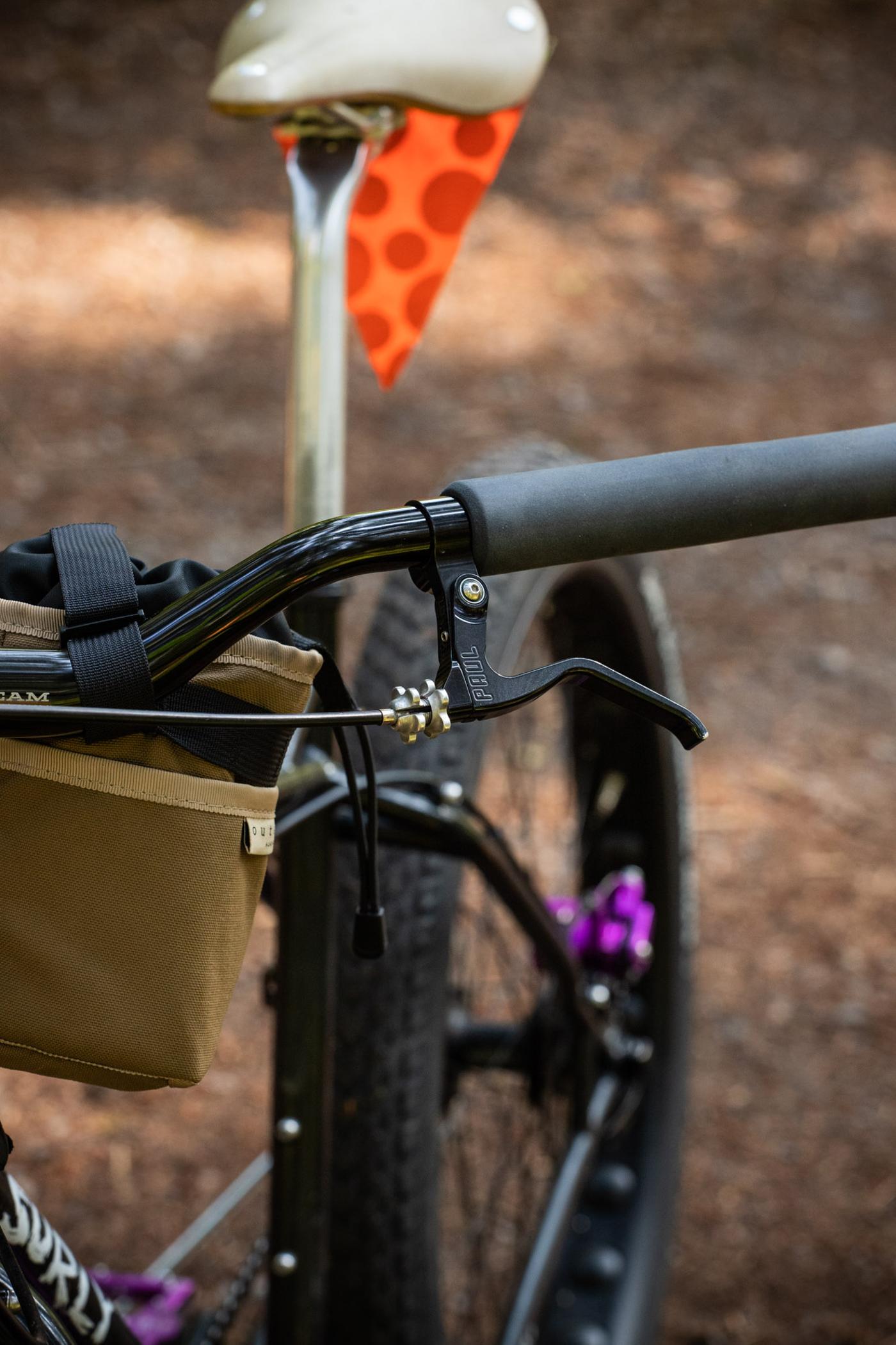 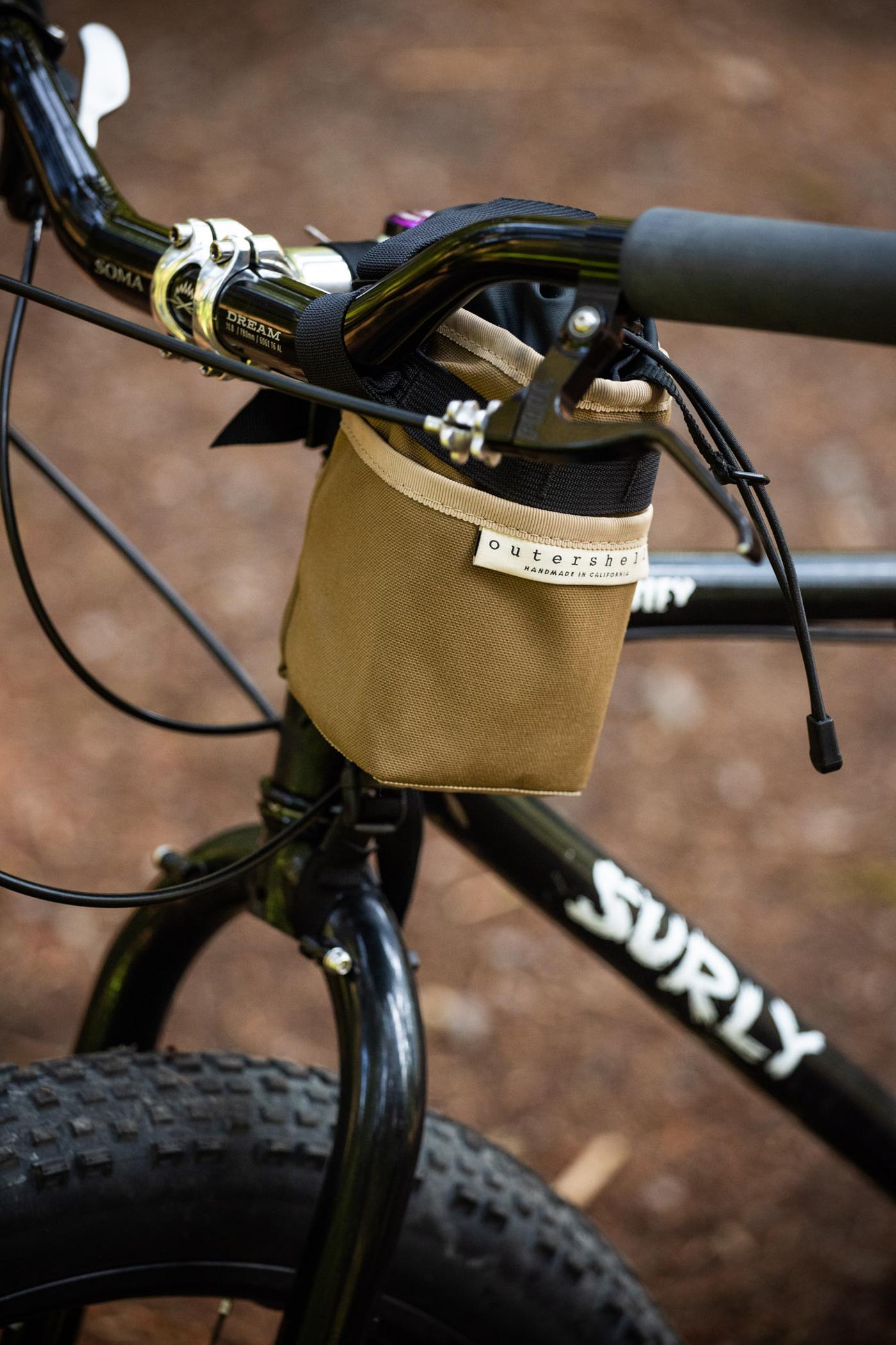 You see, we’d lent Stephanie’s Wednesday to our nephew, who is well on his way to becoming a North Shore singletrack-focused 2014 me, when the covid bike boom destroyed our plans to find or build an affordable trail bike for him. I figured with the Wednesday out of the house, the Pugsley at least presented an opportunity for us to replace her slow bike, even if temporarily, and to later have a loaner to take the nephews camping.

One rainy early summer day, the Pugsley came home with me. It was completely stock apart from the switch to 1x, white duct tape rim strips, and some Shimano hydraulic brakes. And it was awesome. (See how I’ve rounded the bend?!) The rear brake must have lost some fluid into the pads at some point, as the noise was horrendous and the bite non-existent. I test rode it once and then did the only thing I could think of. I threw the parts bin at it.

I started with the bar, stem, and post – the parts I usually change, even on review bikes. A Jones bar to share and a big ol’ Thomson for me, a shorter stem for Stephanie, a Brooks C17, you know, the usual. But that brake. Ugh. In a late night burst of inspiration, I made an attempt with a perfectly acceptable set of old BB7s I have in the bin, but realized I didn’t have enough conical washers to make it happen. 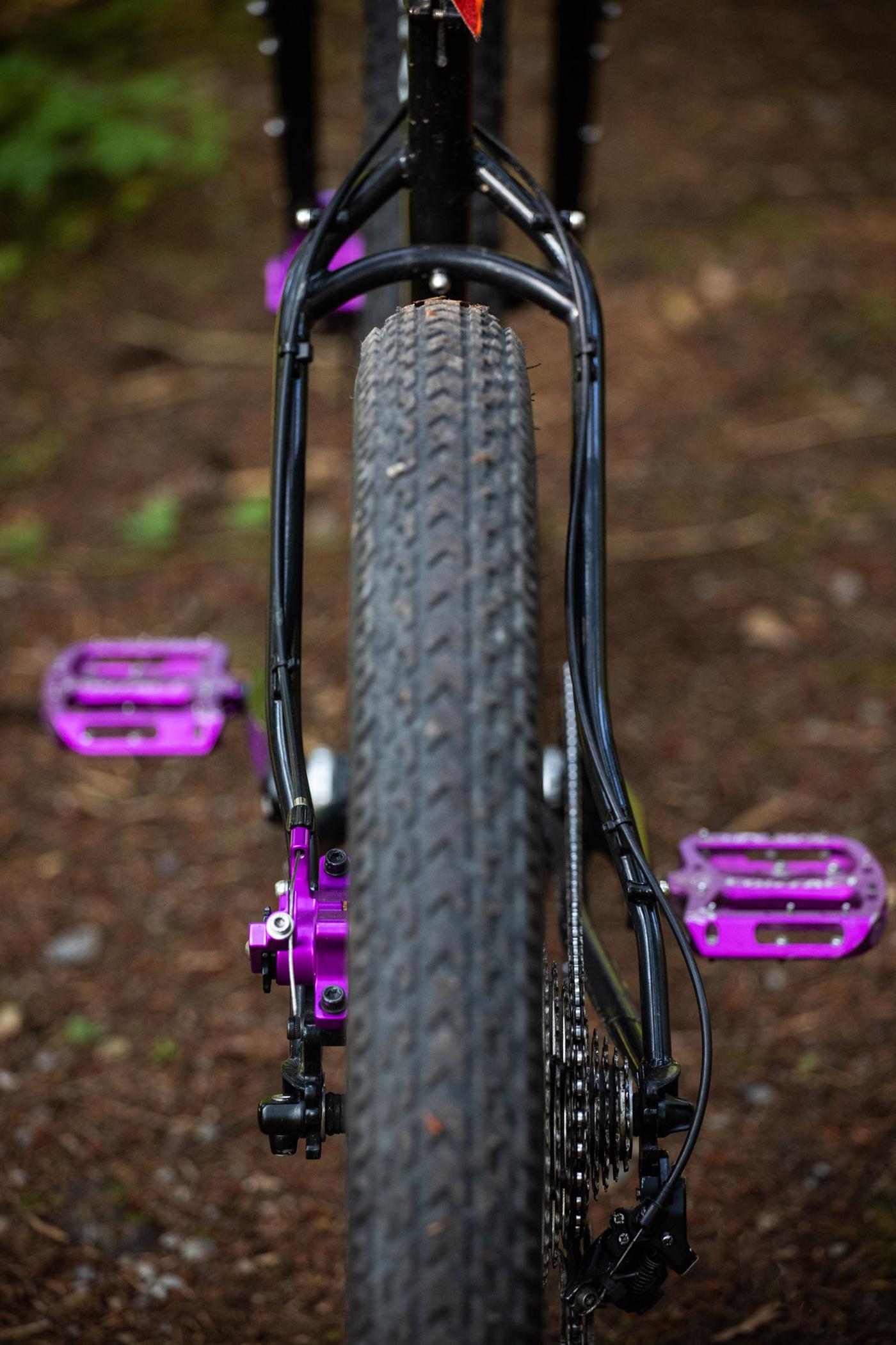 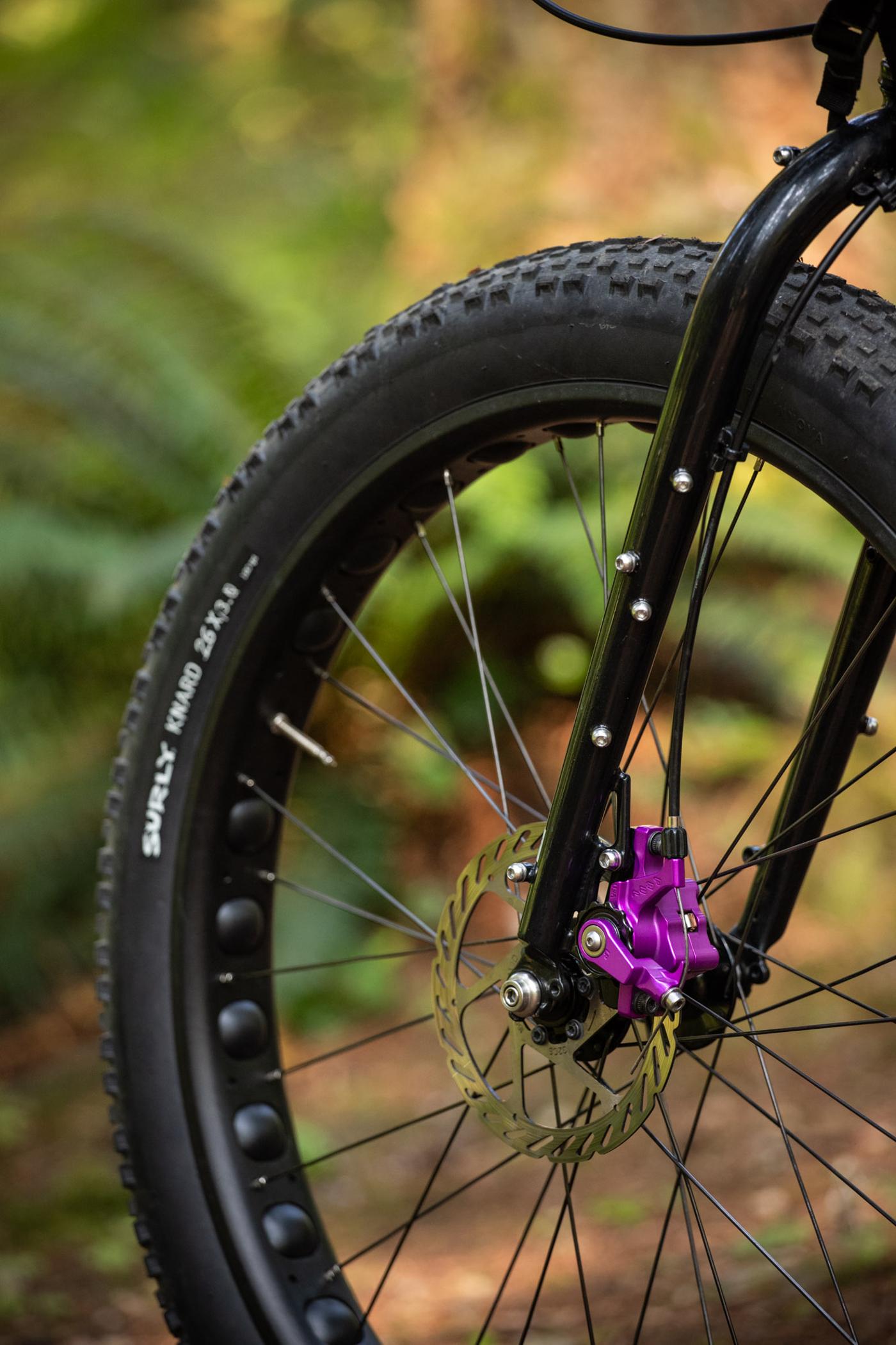 That was when I remembered that I had pulled the purple Klampers and Love Levers off my Unit to put on Stephanie’s Wednesday – but the nephew loan had delayed that project. And, her purple Chromag pedals were there too. The Pugsley was intended for her, right, so it was cool to put her parts on it, right? Right. (Tell that to 2020 me.)

But you know what? It was still a fat bike. Stephanie hadn’t really expressed interest in riding it, for good enough reason: a fat bike isn’t the best daily driver, even for someone who regularly and happily chooses the slowest bike in their three-bike quiver for all day rides.

I dove into the long history of Pugsley opinions in the deep dark webs. I rediscovered Nick Carman’s blog and went down the rabbit hole of early bikepacking experimentation. I trudged through message board threads where the most vocal of Pugsley owners evangelized the 29+ life. I wasn’t about to build a new wheelset around a bike that I wasn’t even sure would stick around, and I also wasn’t about to raise a bb way higher. I like ‘em low! 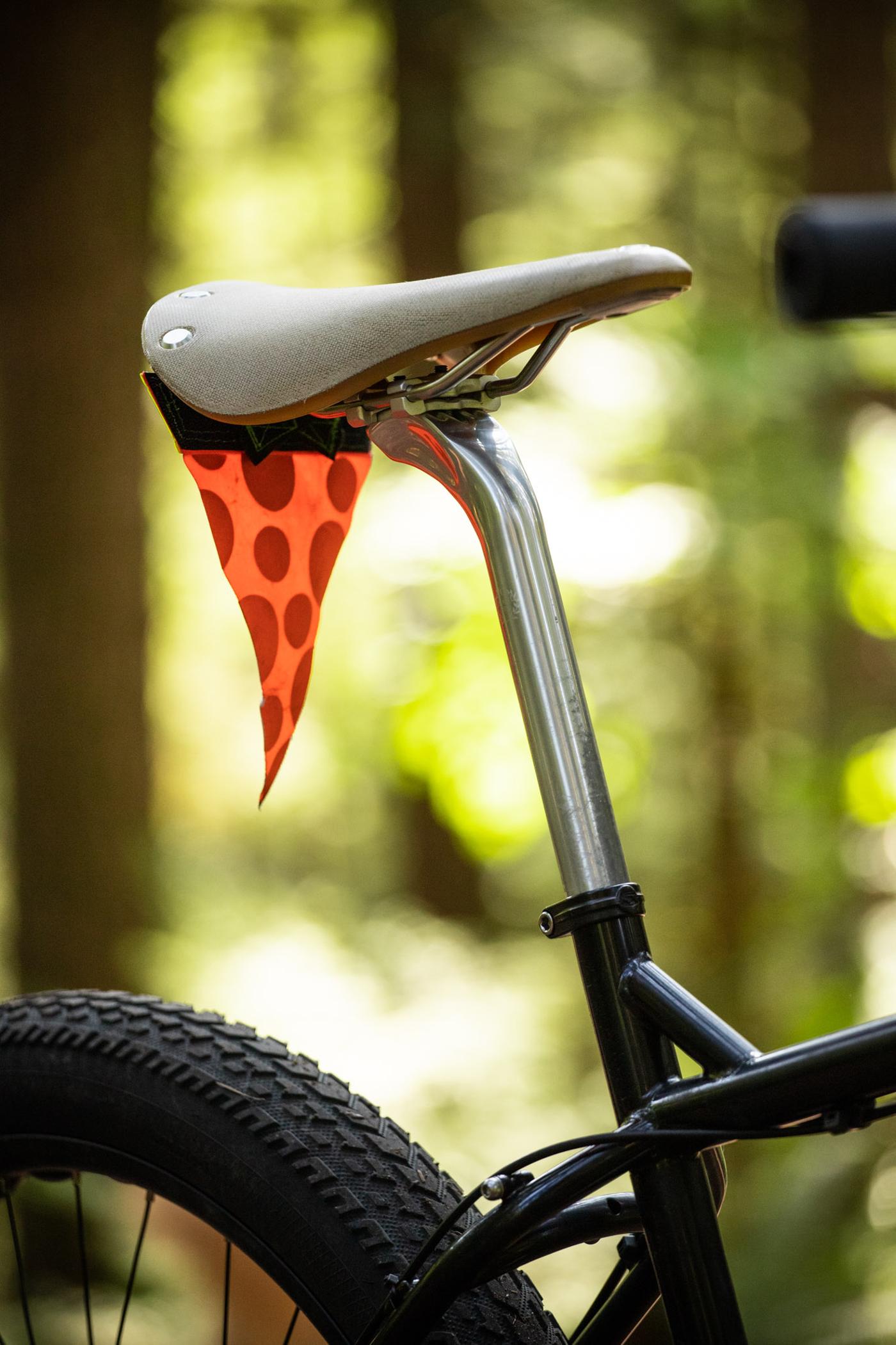 Hidden among the calls for different rims were a few sparks of possibility: other folks who put the right tires on the wrong rims. So, again, I did the only thing I could reasonably do, and threw the parts bin at it. 26” tires are weird and obsolete, but guess what, we have a Big Easy, and my tendency to collect spare parts for the weird bikes we have meant I had a couple tires in the pile. (And some black fat bike rim strips.)

I figured the 3” Knard might just go on the 65mm Marge Lite rim, and it goes oh-so-well. 79mm at the casing at 13 psi, and a profile that looks right. The next biggest tire in the pile was a 2.5” ExtraTerrestrial, which comes out at 71mm at 16 psi and doesn’t look quite right ¬– but the point was making a very slow bike into a slow bike and hey… it works!

Since putting the smaller tires on the bike, the armchair critics have come out of the woodwork. “Isn’t the bottom bracket too low?”… “Wouldn’t you rather run 27.5+?”… “That rear tire looks pretty funny…” 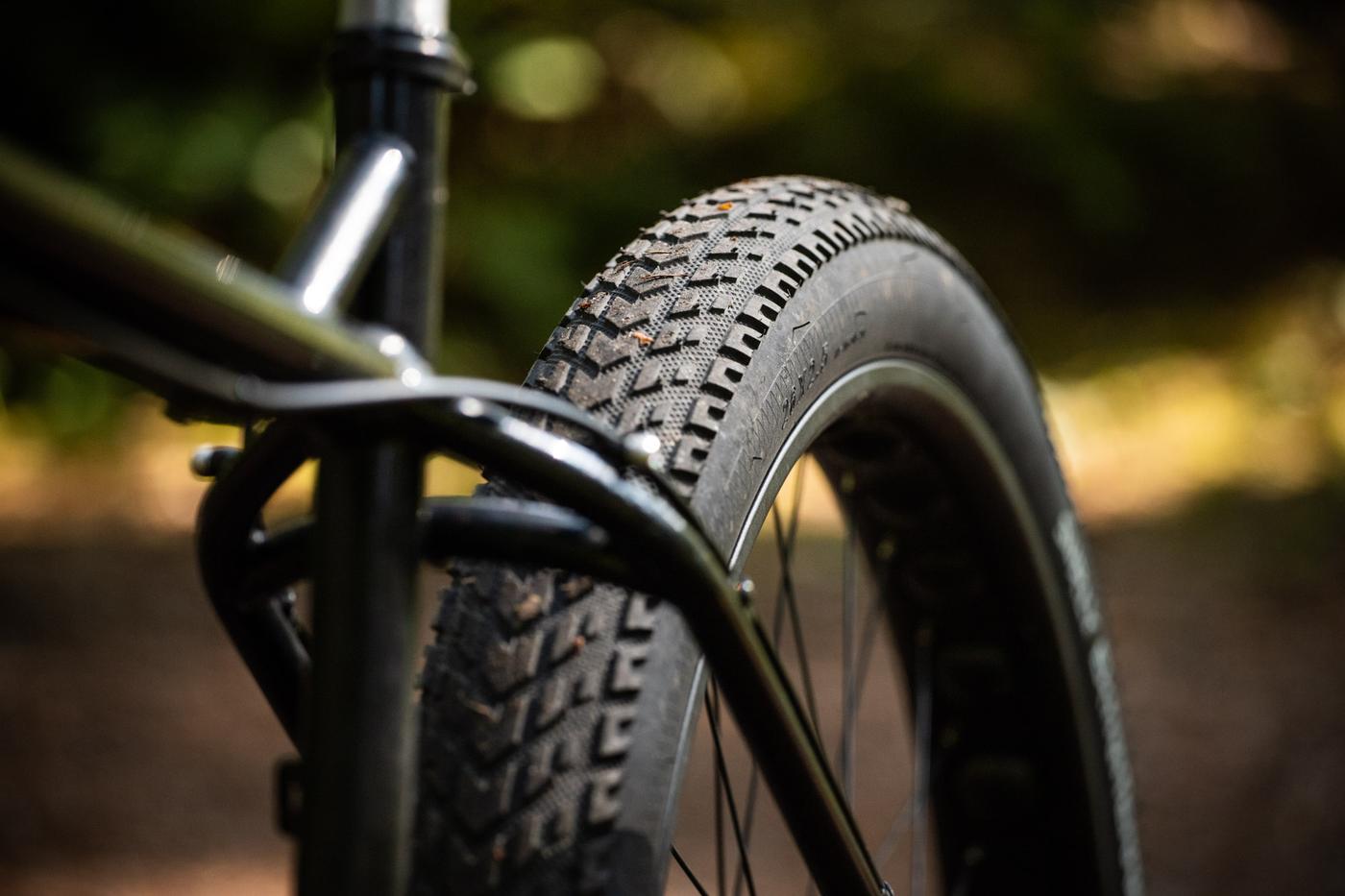 But you know what? As soon as you saddle up, you can’t see the rear tire ¬ and it rides completely fine. The bottom bracket is still higher than a Crust Evasion, which plenty of folks ride on 26×2.8 and 3.0. (By the way, this frame fits very similarly to a Large Evasion… go ahead… compare them on BikeInsights) It rides fine. Great, even. Who knew? Not the folks in the armchairs.

It wheelies. It wheelies so good. A 72º seat angle and a high offset post and a short reach to the bars, it’s a surprisingly good combo that deftly hides the length of the 448mm rear end. The big rearward saddle offset gives me a good pedaling position even with a frame reach that in any other context I would be riding drop bars on.

The Jones bar was familiar of course, and decent enough for a couple nice long rides with the Slow Ride crew and lots of fun at the pace my Unit likes to go. But I felt like the bike would be suited to a bar with less sweep. I would have put the Soma Dream bar on earlier, but had lent it to a friend who was working out the fit on his commuter (the Surly Terminal bar ended up being the one for him). 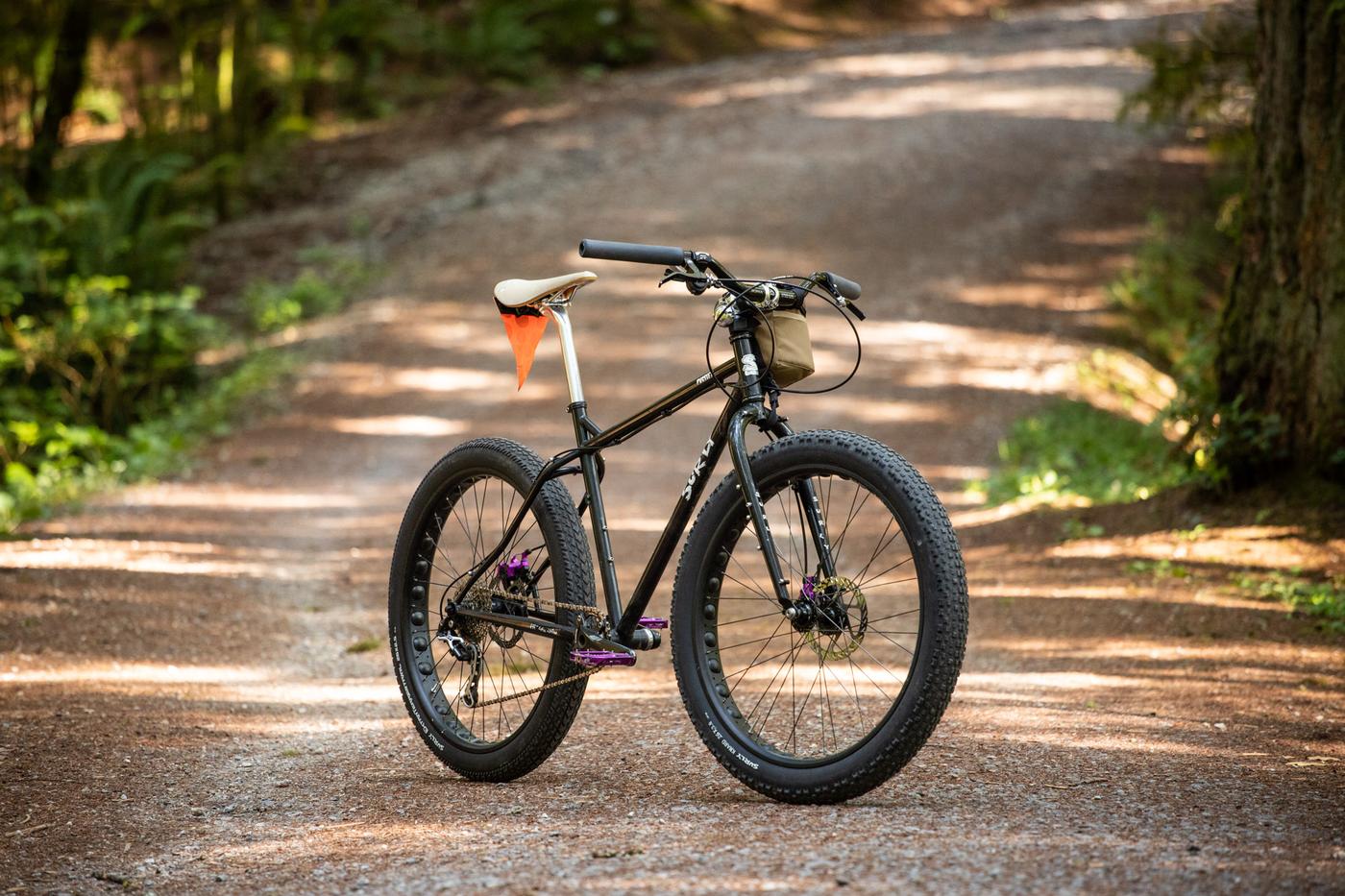 Meanwhile, the Wednesday came back home, and the Pugsley officially became my weird project. It tows the trailer, rides to the swimming hole, wheelies around the neighbourhood, shreds the pumptrack, and gets locked up outside the grocery store.

The Dream bar went on and I wheelied all the way to Friday coffee and back. The final piece of the puzzle, really. The nephew came over and we did a tubeless setup on his new bike, then went for a trail shred on the gnarly North Shore. 2014 me and all the people who still live that life balk. I laugh.

Stephanie’s happy to mention that we now have both of the Addams Family children in our Surly collection. Fitting. Of course, she’s not so happy that her Paul brakes aren’t on her bike – but since I’m on record here, those brakes will make their way onto the Wednesday. No build is permanent around here, but the joy that comes from a surprise hit is always nice.