The Surly Midnight Special is a drop bar bike that fits big tires – real big tires. Beyond fitting huge tires, what makes it unique among the expanding options in this category is that its geometry is derived from a road bike rather than the ‘cross bikes that most “Road Plus” bikes have descended from. Chainstays are short and head tube angles are relatively steep across the board, making for a quick-handling bike that loves to carve corners at any speed – but especially when you’re going fast.

Don’t let the massive tire clearance fool you; despite the wide 650B tires, it handles on the road more like bikes you’d expect to see narrower tires on. Because of this, the Midnight Special is difficult to classify. It fits big tires and it’s got disc brakes and drop bars, but it’s not a ‘cross bike and it’s unlike any bike being marketed as gravel. It fits more tire than a Straggler but its geometry is more like that of the Pacer. So let’s get into that. 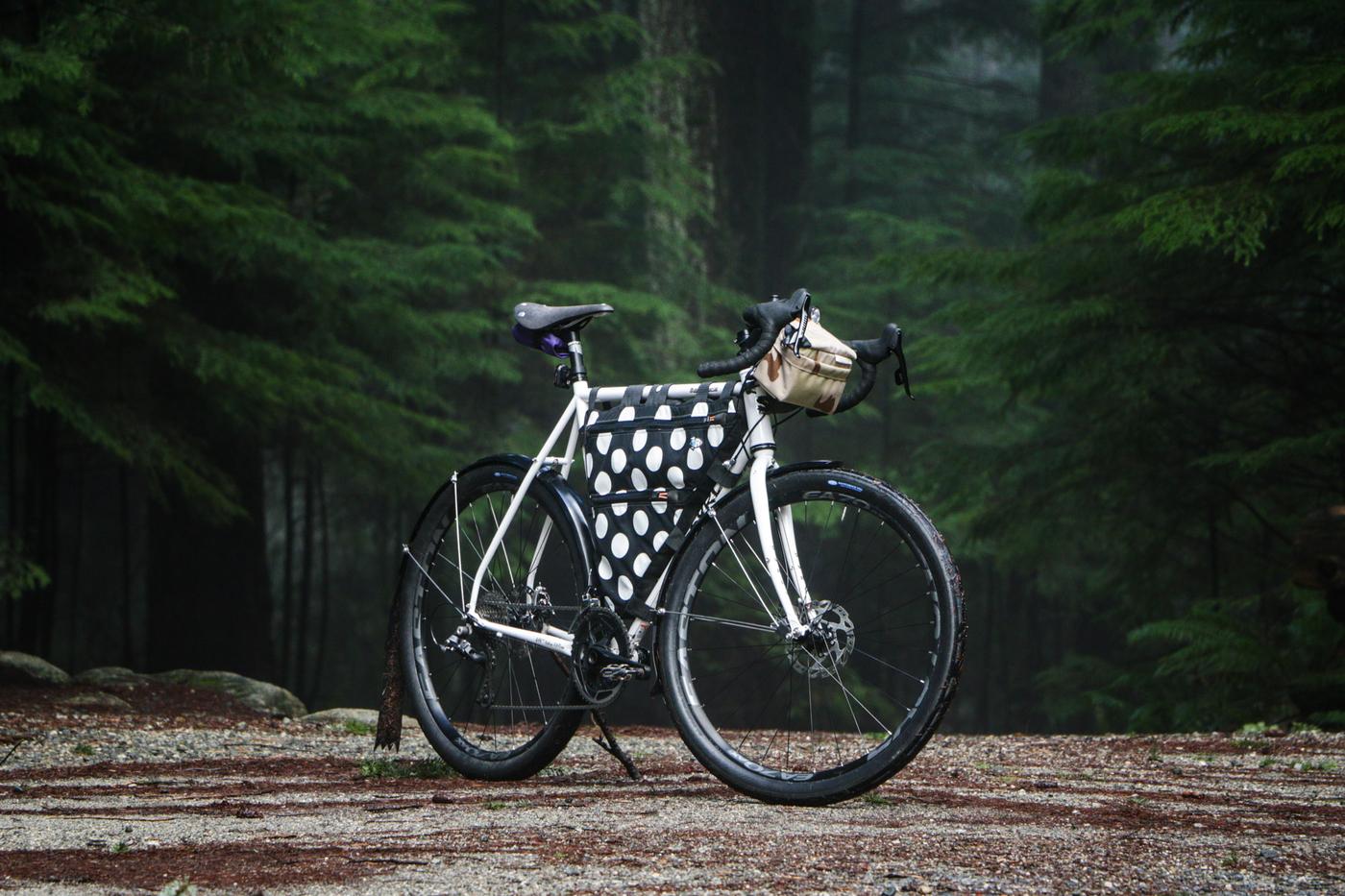 The Midnight Special has some characteristics not seen on Surly’s drop bar bikes in the past. First up, the 44mm head tube with external lower cup means you could choose to run a tapered fork – i.e. a carbon fork – if that’s the kind of thing you’re into. Carbon forks can save a lot of weight over steel forks. If you’re into it, go for it. If you’re not, the stock fork is great.

Next, flat mount disc brakes. Now, I’ve got no problems with post mount brakes, but I can see why the road disc world moved to this standard. After riding a few bikes with flat mount, it’s not without its quirks in setup, particularly at the rear caliper. However, from an aesthetic standpoint, flat mount brakes integrate cleanly, and I’ve come to like that aspect.

Over the past couple years, I’ve been paying close attention to how different designers implement the flat mount standard. In most cases we see a forged left side dropout with both the axle and brake mount integrated. Surly’s solution here is one of the more elegant I’ve seen, and I really like it. The chainstay is brazed into the dropout, while the seat stay is welded to the top, with a bend to allow lots of room for brake options – including post mount, if you prefer. 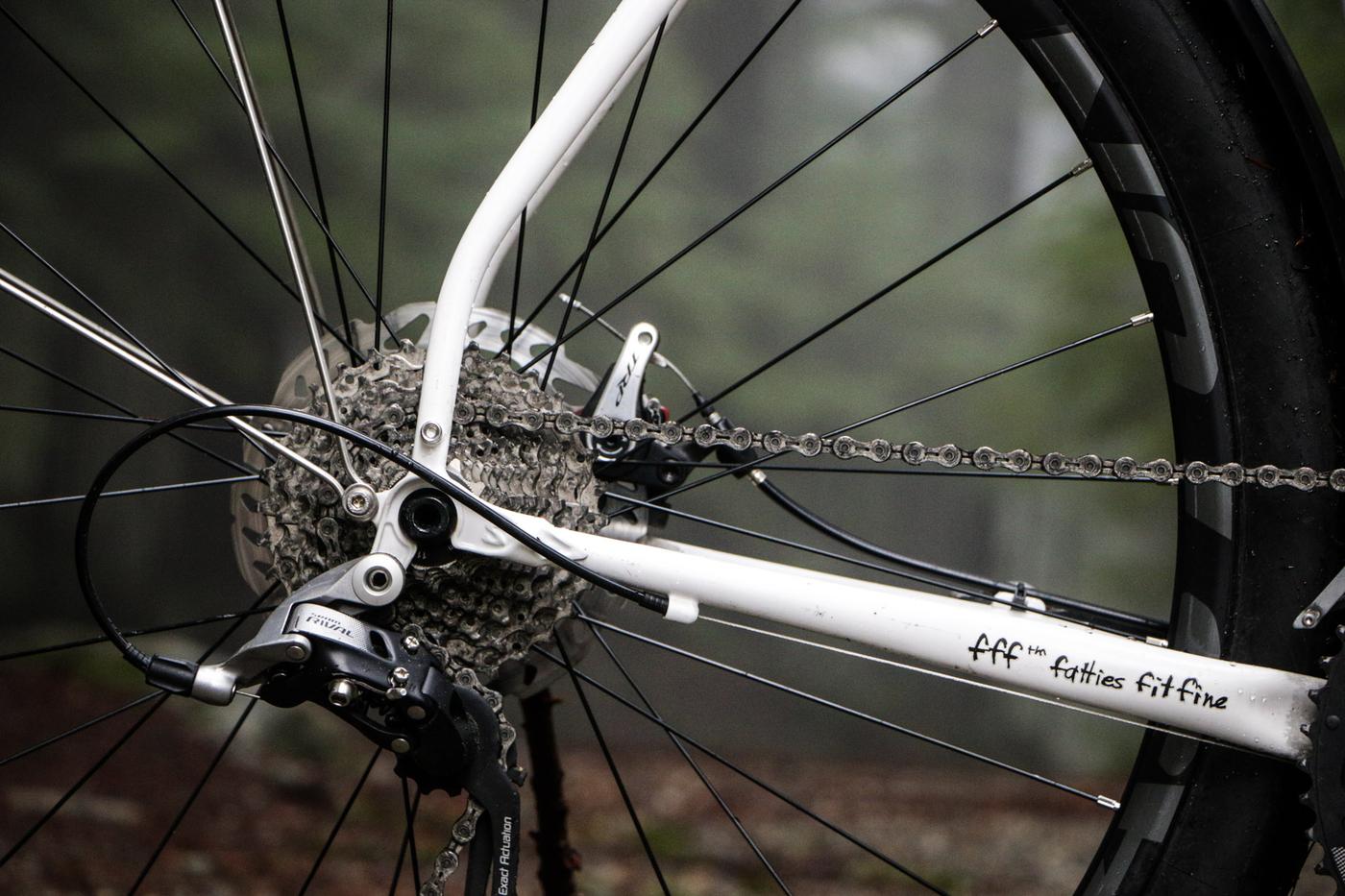 From a compatibility standpoint, a flat mount bike can be adapted to post mount calipers (provided the seat stays have enough room), but you can’t go the other way around. So in this sense flat mount is arguably more useful in the long run.

Along with flat mount, 12mm through axles have become the standard for disc road bikes. At the rear end it’s the same 12×142 standard as mountain bikes used a few years back, and a simple end cap swap on most 10×135 QR wheels. Yet I’ve got front wheels, for which I have both 9×100 QR and 15×100, that no 12×100 end cap is available for. The silver lining here is Surly’s propensity toward backward compatibility means both frame and fork can be used with through axle or QR wheels.

The fork dropouts echo the lugged form of the chainstay joint, though some may be disappointed to see Surly has gone to a unicrown fork rather than the lugged crown on their other drop bar bikes. I always liked the look of Surly’s lugged crowns, but I wouldn’t consider this a deal breaker. It’s still got a good amount of rack and fender mounts which matters more than what kind of crown it’s got.

What you’ll notice about all of these new frame details is that the Midnight Special gets the newest standards in road disc, while retaining compatibility with legacy standards. Run whatever fork, wheels, and brakes you want. 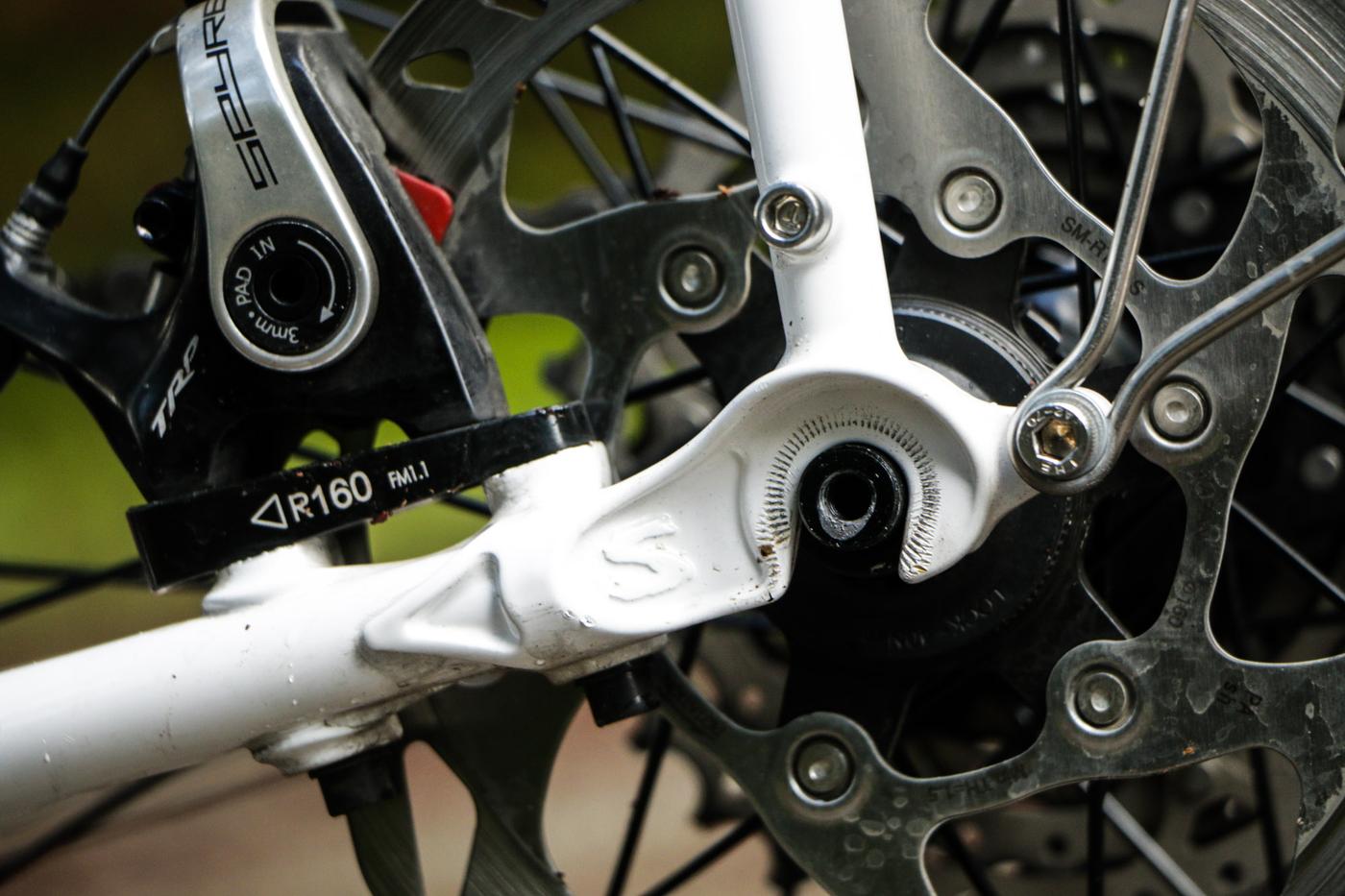 But What About the Dropouts?

Surly has a history of making complex dropouts that accommodate running geared or single speed, are compatible with a variety of axle standards, and have lots of holes to bolt things to. The Surly approach caters to those who want nothing less than to build their bike from a parts bin and who revel in the idea that their dropouts are ready for the apocalypse.

To accomplish backward compatibility with QR wheels, the dropouts are effectively QR dropouts with a larger opening to accommodate the 12mm through axle, and an adapter for QR wheels. Usually, through axles all but eliminate wheel misalignment – but despite being compatible with through axle wheels, these are not through axle dropouts. Like a QR bike, you need to double check that your wheel is properly seated in the dropout.

I’m not sold on the convertibility of the dropouts but it’s a very Surly thing to do. Some people will be very happy that their existing disc wheels will fit in the Midnight Special – and in practice the open design worked just fine for me – but I’d rather have the benefits of a closed through axle dropout. 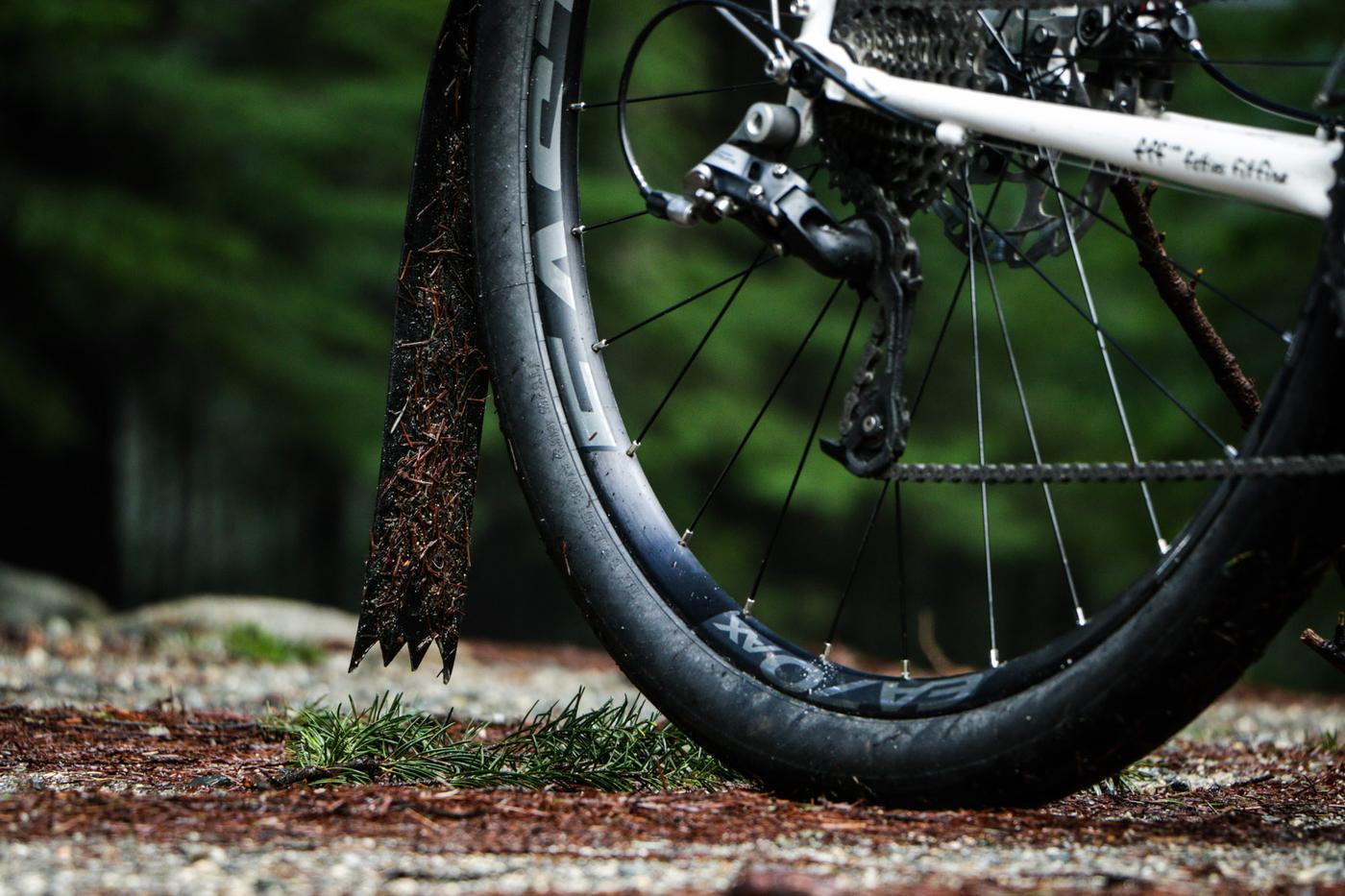 So How Does It Ride?

Fit-wise I chose Surly’s 58 which measures 61cm center-to-top and has a 58.5cm top tube. The Midnight Special retains the classic Surly silhouette with a level top tube, which also means you might be running more spacers if you choose your “normal” size. I upsized to get a longer head tube, and I ended up on a 100mm stem.

The first thing I noticed was that the Midnight Special felt more like a normal road bike than any bike I’ve ridden with WTB’s Road Plus tires. It was an interesting feeling: I’ve ridden a lot of bikes with Horizons and Byways, and they’ve always felt a bit slower to turn, a bit less fun to carve corners with.

Not so with the Midnight Special. Even at my preferred pressures around 35-36 psi, it felt so good at high speed. Carving corners was super fun, the lower fork offset allowing me to really lean in without the bike changing its line. The Midnight Special, with its steep head angle and low offset fork, is the best bike I’ve ever ridden WTB’s Road Plus tires on. They really do. I was seriously surprised by the amount of clearance on either side of the 650×47 WTB Horizons that came with the bike. For a production frame with a road crank and no yoke, the Midnight Special has the most clearance I’ve seen. Surly claims it’ll fit a 27.5×2.35” and I don’t doubt that.

How’d they do it? Well, the drive side chainstay has been squished almost completely flat where it passes between the chainrings and tire. Huge amounts of room for whatever tires you can imagine, or for big road tires and full fenders without any funny business. Seeing this much clearance on a bike with a 68mm bottom bracket shell makes me happy!

Because they’ll fit, people will be tempted to put mountain bike tires on this bike, but I’m going to say I don’t think it’ll be nearly as fun as with faster road slicks. The fact that you can do it makes the bike all that much more versatile, but it’s so good as a road bike that I feel like you’d be missing out. Unless your rides are completely on dirt, a tire like the WTB Byway is really well suited to the Midnight Special. 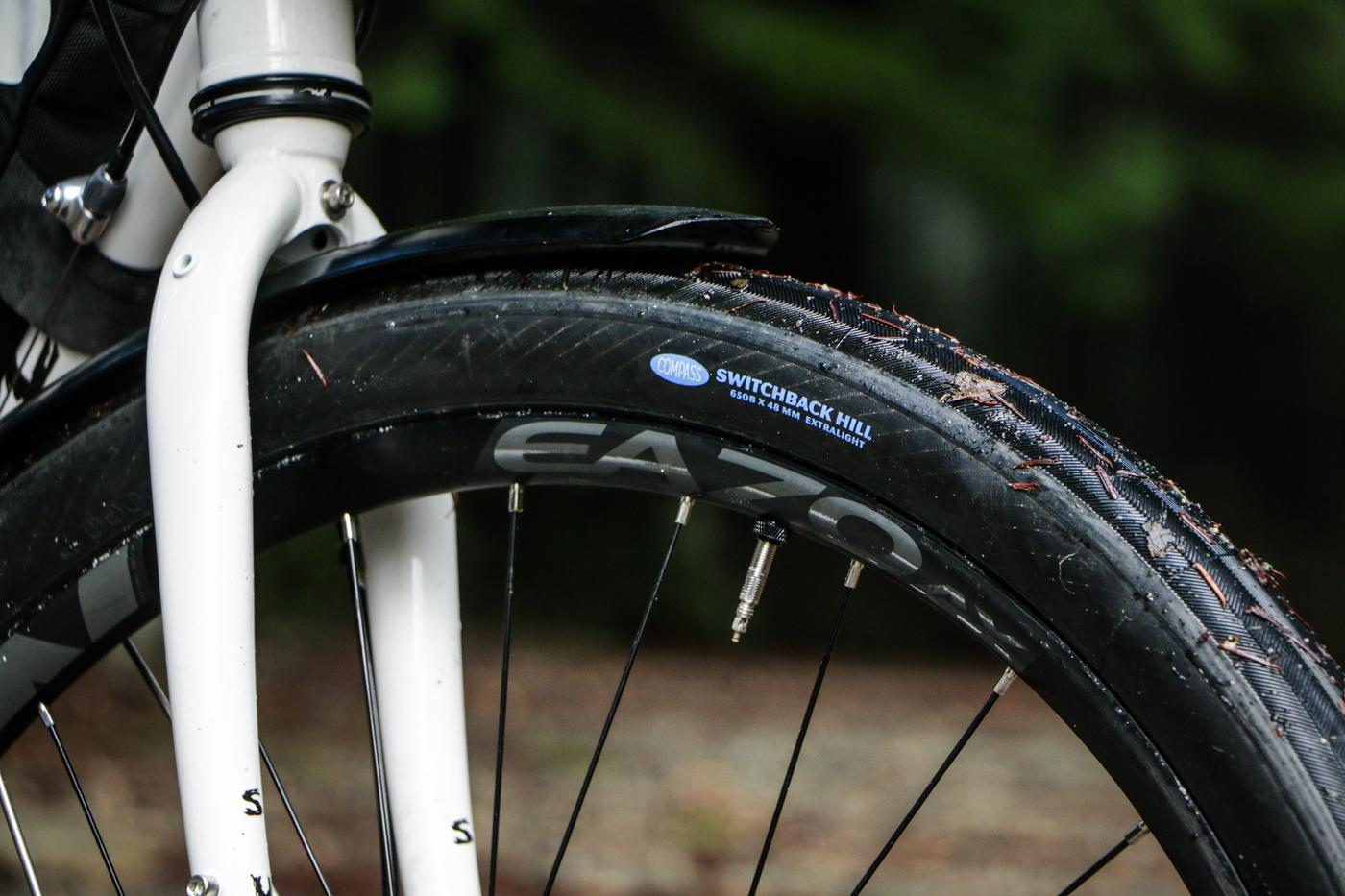 On most production bikes with 650B tires you’re going to see bottom bracket drop in the range of 65-70mm, with small variations outside that. I’ve noticed a lot of people find the combination of 70mm drop and 47mm tires to be as low as they’d like to go. They’ve tried 42s with tires like Cazaderos and find pedal strike. Personally, I am happy on a 70 drop with 42s, but I understand why others like more clearance, even if it is only 5mm.

With this in mind, the Midnight Special’s 65mm drop means those who like more clearance for pedal strikes in off-piste situations would be as happy on 42s as they would on a 70mm bike with 47s. I mention this because there are a bunch of good 42mm tire options out there, and the Midnight Special is suitable for all of them. 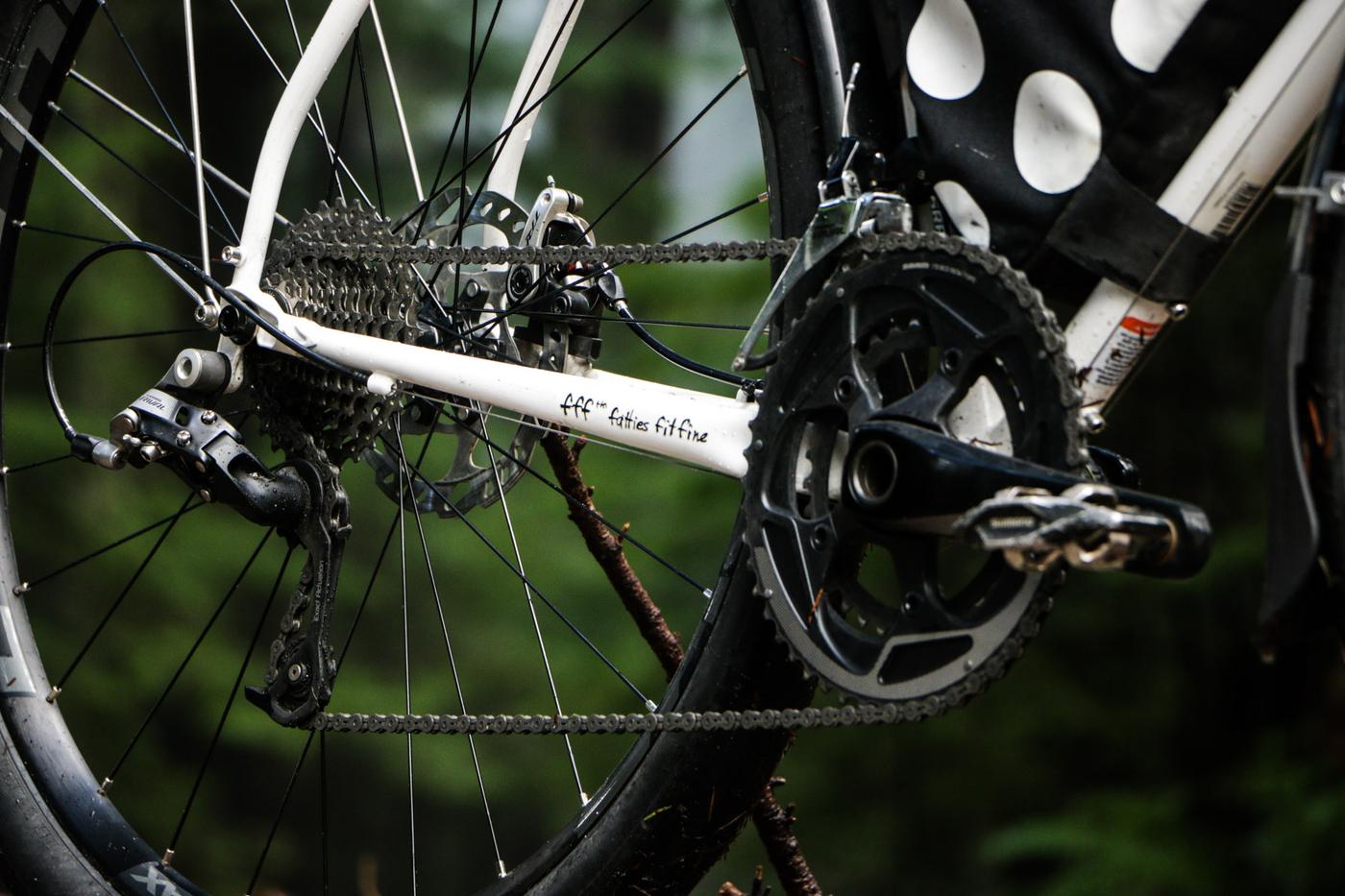 In the past year I’d ridden no fewer than five bikes with SRAM Rival and Force drivetrains, but this was the first with a double front – and I really enjoyed it. I appreciated the the wider gear range of the 11-32 without the big jumps of a mountain cassette, and I didn’t even know it was a Sunrace cassette until I looked closely. For my own needs I’d prefer a crank with smaller chainrings, but the 50/34 worked just fine.

As I mentioned above, I really liked the WTB Horizons on this bike. They set up tubeless easily, have lots of tread, and have robust, durable sidewalls well-suited for everyday riding. There are plenty of options out there for faster 650B tires, and lots of 27.5 mountain bike tires that’ll work as well.

When I opened up the stock Alex rims to set them up tubeless, I found that the bead seats were not tubeless-ready, so I took the opportunity to try out my new Easton EA70 AX wheels. It would be nice to see the bike spec’d with tubeless rims out of the box, and Surly tells me that will be the case in the future.

I’ve been doing a lot of distance riding lately, and have come to enjoy running Compass tires tubeless for the purpose. The 650×48 Switchback Hill TC measured up at nearly 51mm on the 24mm EA70 AX rims, and there was still lots of clearance in the frame. The lighter wheels and tires really quickened the bike’s handling, for better or for worse. To be honest, the Horizons are perfect, as long as you aren’t doing brevets or riding with a fast road group. For those times, I prefer faster tires like Compass.

As you’ll see in the photos, I changed the seat post and saddle as well as the stem. I usually end up changing bars as well, but the 44cm Cowbell worked for me. If I were to ride the Midnight Special for a longer term, I’d likely change the brake cable housing for compressionless and swap the bars out, swap for a crank with smaller chainrings, as well as use a lighter set of fenders. 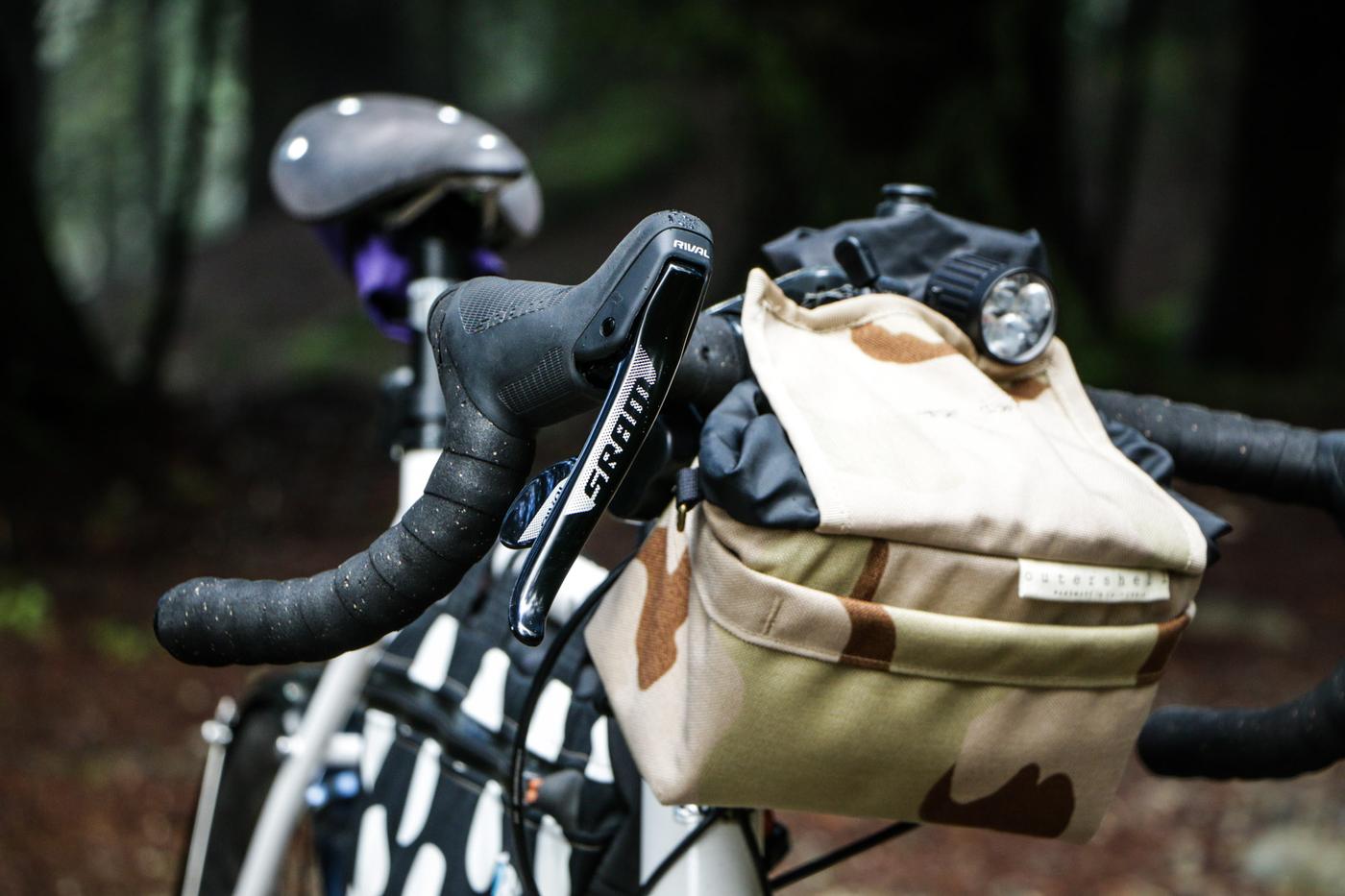 So What Makes It Different Than the Straggler?

In terms of features, the Straggler fits QR wheels only, post mount brakes, and a 1-1/8” fork. The Midnight Special gets all the future-proof updates noted above. Both the 700c and 650b Straggler are happiest on 42mm tires, though the 650b bike can squeeze the WTB 47s. You can be assured that if Surly were to replace the Straggler, they’d do everything they could to make it fit 47s and more.

There will be some initial confusion about what differentiates these bikes, but anyone who rides both will notice quickly. I think the majority of the confusion lies in the fact that the Midnight Special fits bigger tires than either Straggler. To me, and to many readers of this site, big tires just make sense. Pairing them with road geometry is new, and it’s good. 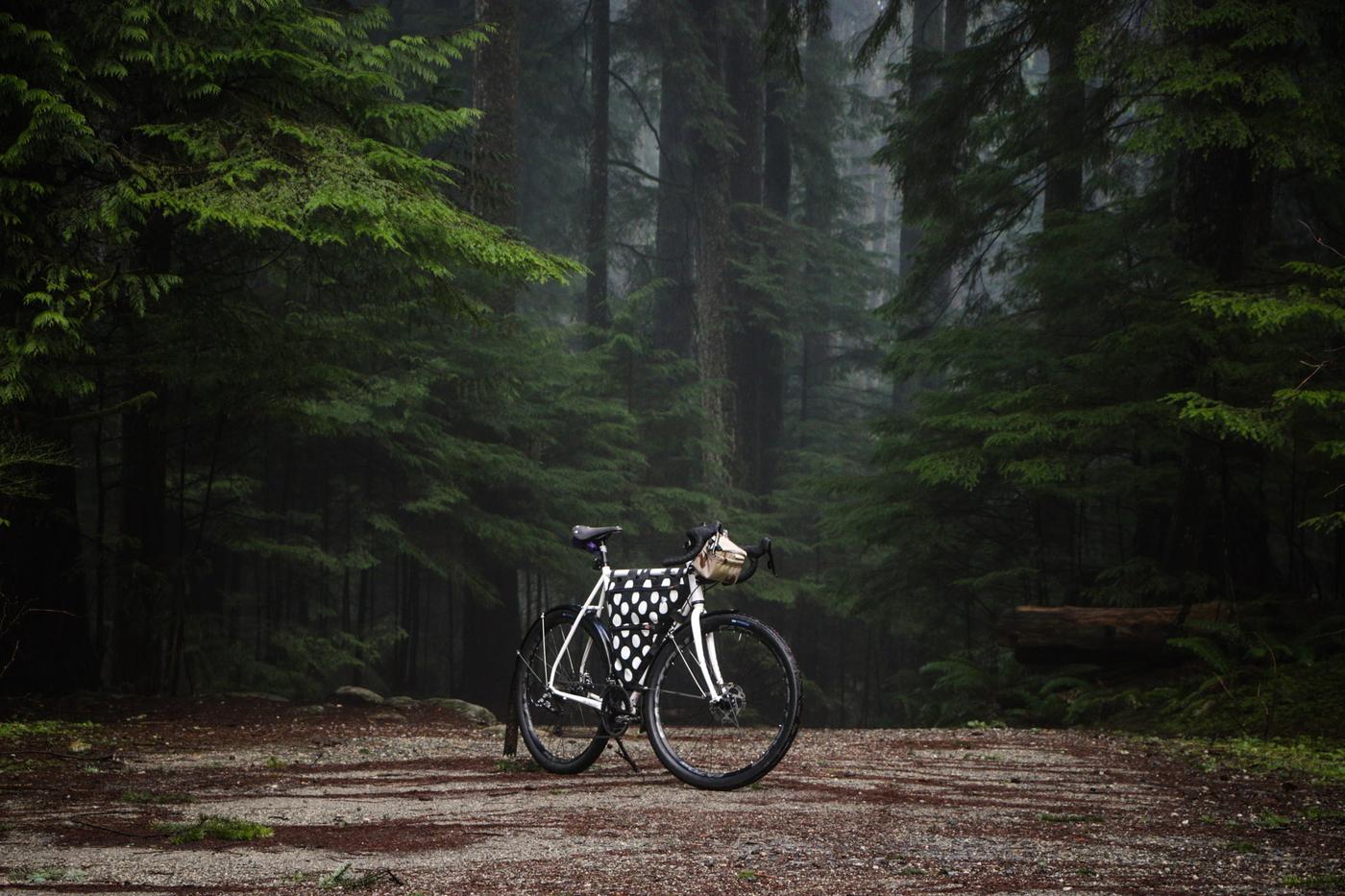 The Midnight Special is unmistakably Surly. It’s a bit of a middle finger to traditional road bikes, yet it’s certainly capable of keeping up with them on the right tires. Surly has used high volume tires in a way that’s actually different than what’s currently out there, and I like it. The Midnight Special isn’t going to be the lightest bike out there, but that’s not what attracts people to the Surly brand. It’s gonna last, it’s more future-proof than retro-grouch, and you can sure bet you’ll have fun with it.