The Trek Checkpoint All Road Checks All the Boxes 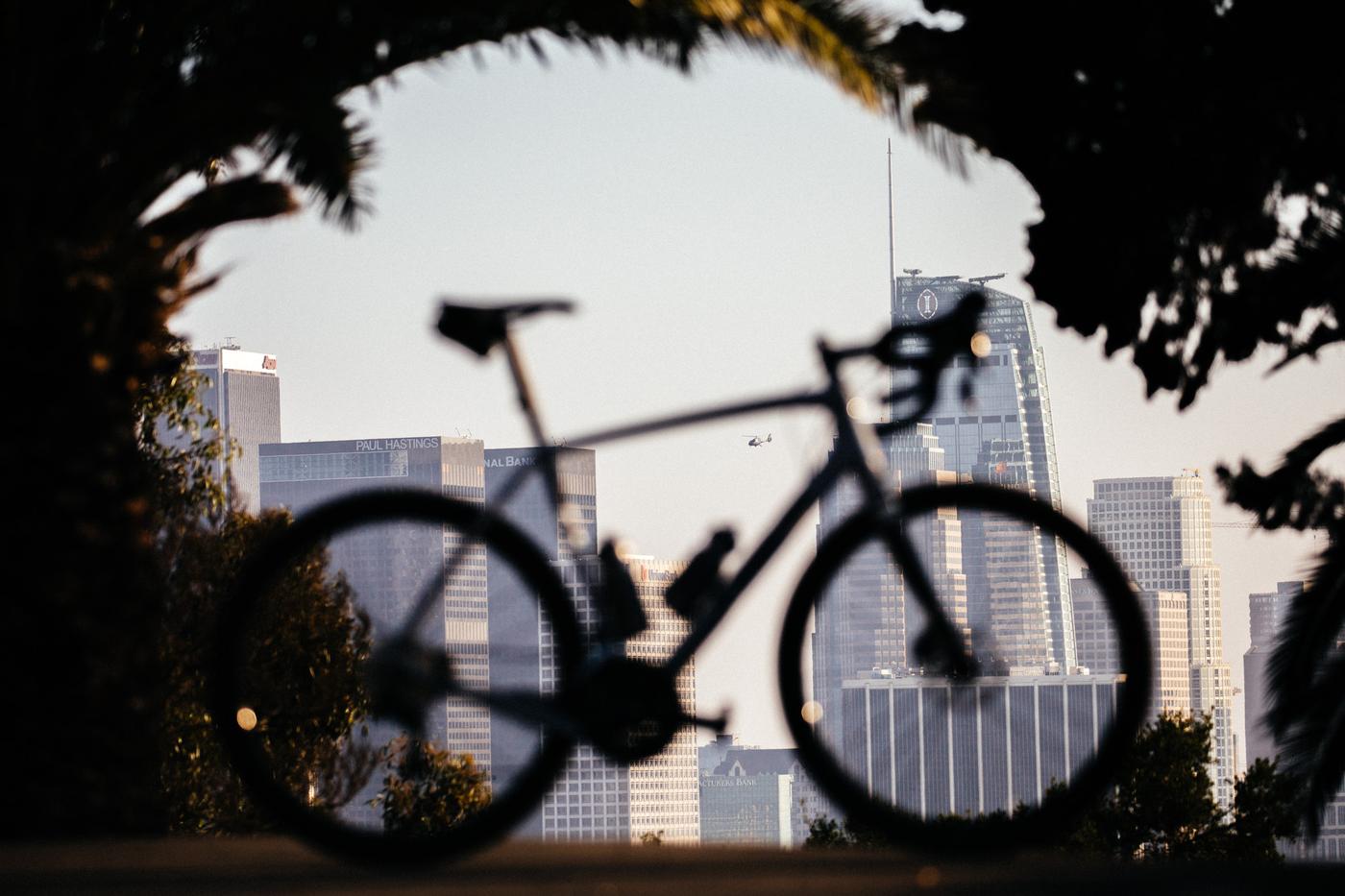 A History of Compliance

While the modern mantra of a brand like Trek’s mass appeal has been centered around marketing terms like “vertically compliant” and aerodynamics data in terms of their drop bar bike categories, that’s not what the brand solely focuses on. Many would argue their heyday lies in their early mountain bikes and touring bikes and that their pedigree lies in those days. The problem is, there was a lot of plastic bike marketing between those Trek 970’s and 520’s, so it puts Trek in an awkward position when it comes to designing, manufacturing and ultimately selling a bike like the Checkpoint. Personally, I think the consumer might be confused. Is Trek just jumping on the bikepacking, gravel, adventure, touring, or whatever it is you prefer to do in shorts and a t-shirt, not lycra bandwagon? Or is there a real fervor present when it comes to throwing their cycling cap in the ring. I suppose it all comes down to that saying “the proof is in the pudding.” 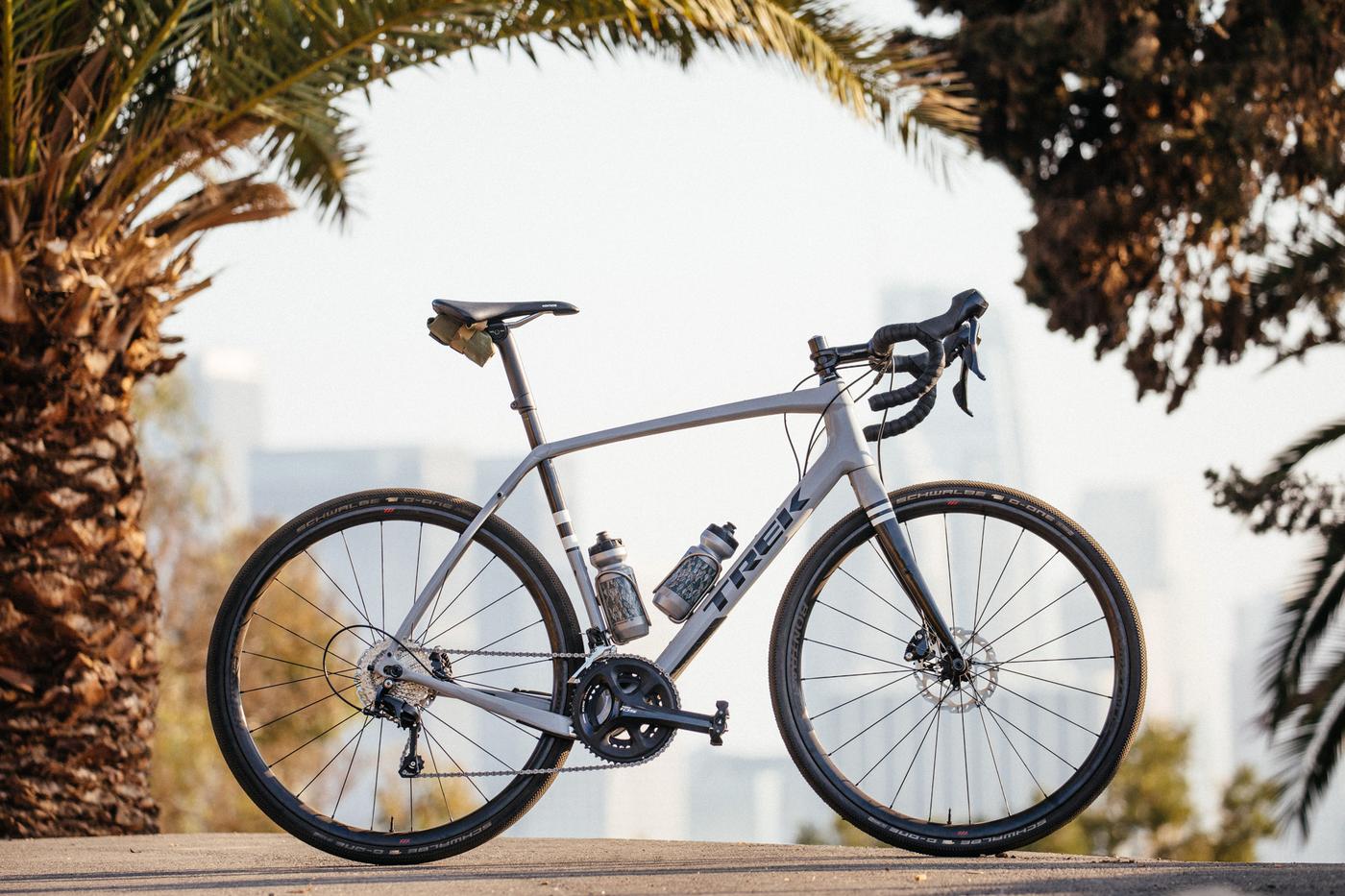 Don’t Call it a Gravel Bike

The big jump in the cycling industry will occur when racing data is not used in the marketing of a bike like the Checkpoint, and Trek has done a great job at selling this platform as a “fun” bike, right alongside their 1120 bikepacking MTB. While the Checkpoint falls into the “gravel” category, right alongside the Domane and Crockett, it’s a different bird altogether. In fact, I’d be more willing to put it into their “Adventure and Touring” category, because to call it a gravel bike, limits its usage to the potential audience. 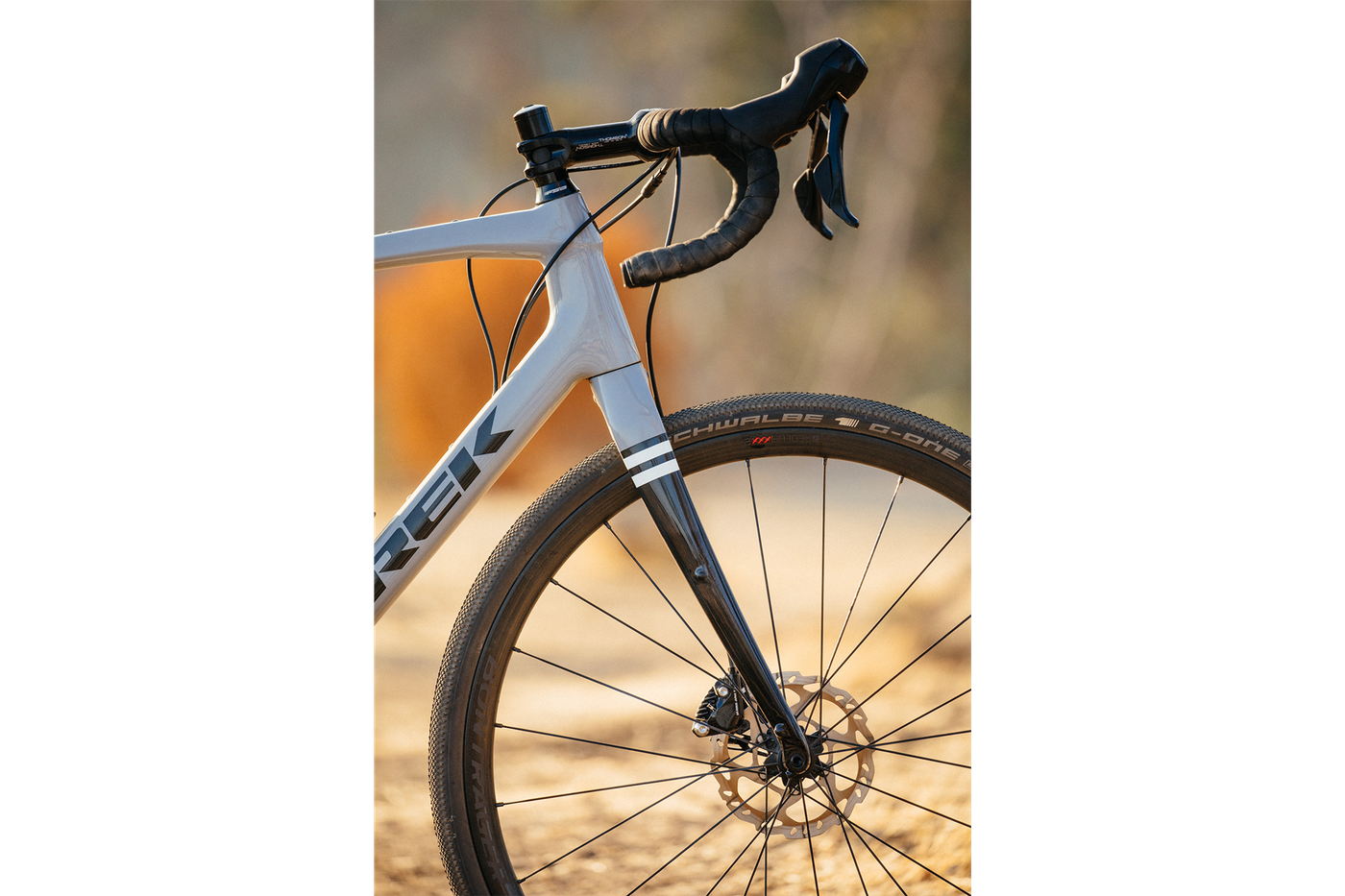 “I wish the fork had rack mounts!” “Why can’t someone make a carbon fork with rack mounts?” “Where are the rack mounts?” “RACK MOUNTS RACK MOUNTS!” You’ve gotta be either really deaf or really arrogant to release a carbon bike that could be an excellent touring or bikepacking rig without freakin’ rack mounts on the fork. The thing is, Trek didn’t stop with the fork. There are rack mounts on the frame, extra bottle bosses, a third bottle mount location on the underside of the downtube, bosses for bolt-in bags, fender mounts, a dynamo light mount on the crown. This bike has all the bosses. Hot damn! We’re getting somewhere! 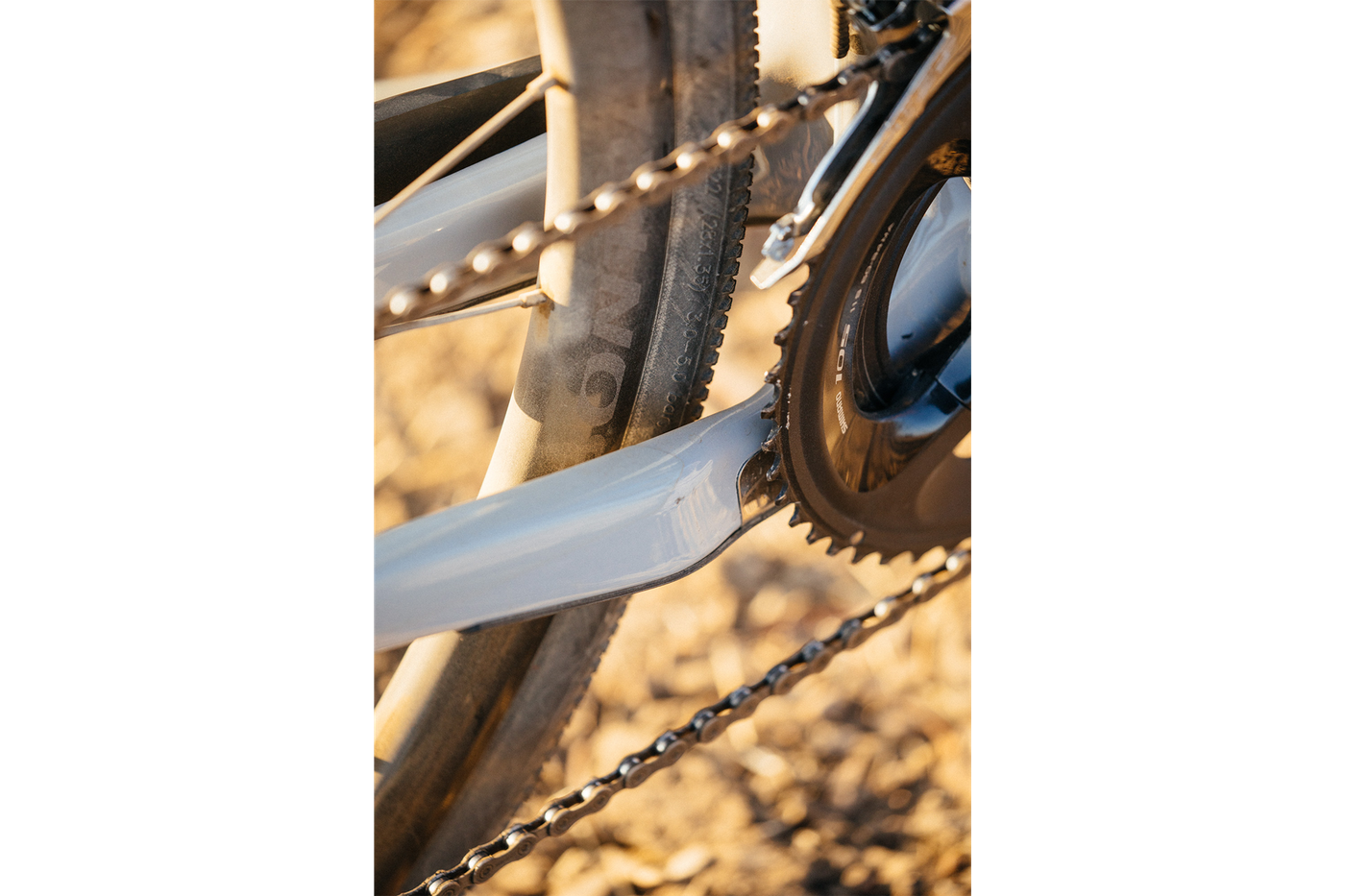 You Have the Clearance

Remember when it was hard to find a bike that cleared a 43mm tire like those beautiful Rock n Roads? Or hell, even a 40mm on a bike from big “Brand X” was hard to squeeze in. Now, you can usually fit a 40mm on a disc “all road.” All I’m trying to say is, the times are a changin’. The Trek Checkpoint fits a 45mm tire like the WTB Riddler with plenty of clearance. If you’re planning on riding in a muddy zone, you might want to err on a smaller tire. The coolest thing about this bike and what has ultimately influenced my own re-build of my Firefly is that you can ride a double crankset on it with a 45mm tire thanks to a slightly dropped chainstay. Color me impressed! 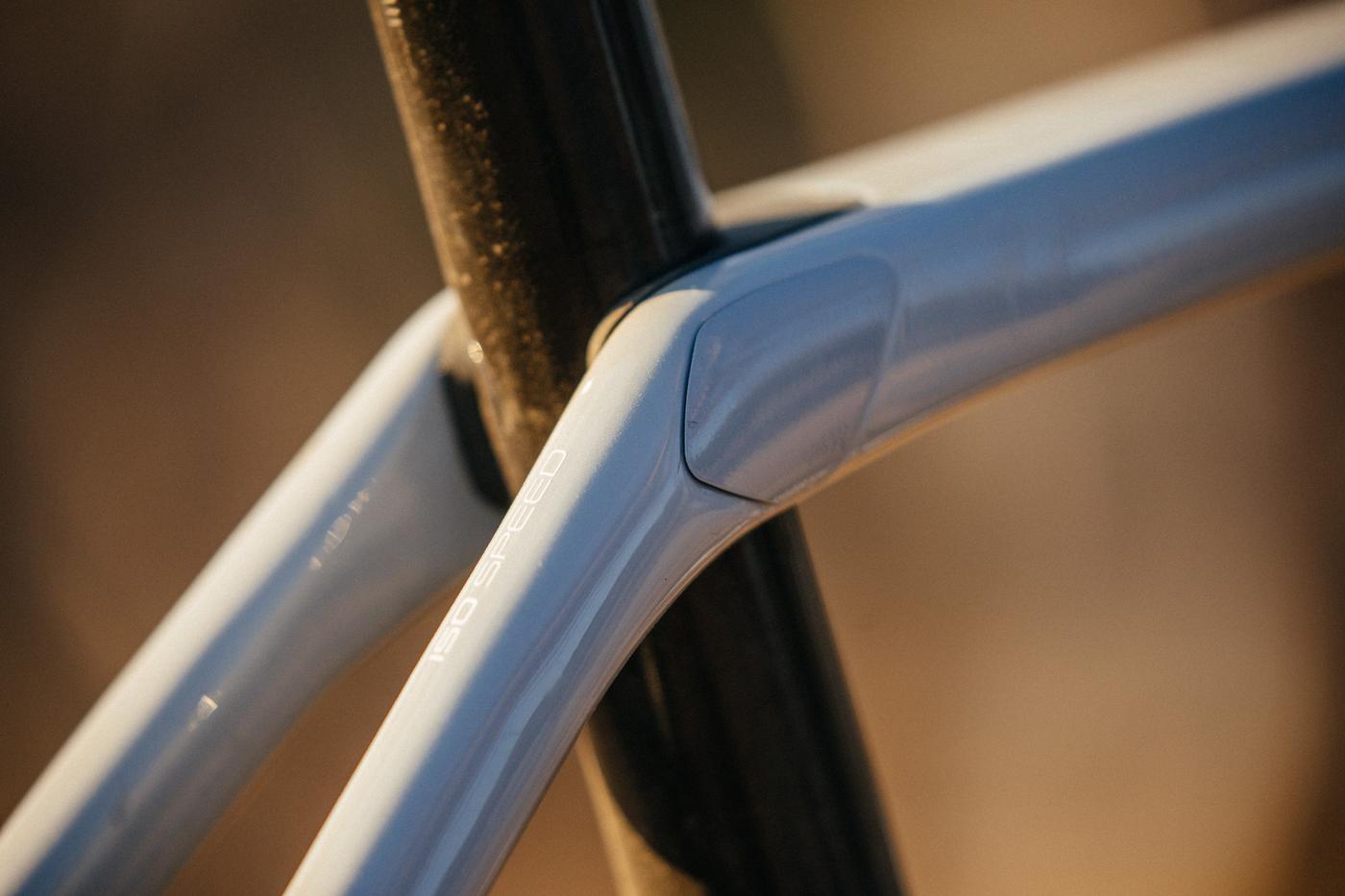 Sure, the bike isn’t without its designey nuances. There are a lot of details on the Checkpoint that are to be expected from a big brand. Personally, they come across as gimmicky, but I will say I could feel them working. Take for instance the decoupling that happens at the seat stay cluster, dubbed the Isospeed decoupler. Designed to work in conjunction with the Ride-Tuned Seatmast, the Isospeed decoupler offers – dammit, I didn’t want to use this word in this review – compliance when riding over washboard or rutted roads. Yes, I could feel it working, but am I sold on it as a feature? Ehhh. Part of the appeal to riding big tires is lower pressures and lower pressures eat up a lot of the road vibrations. That said, plenty of people will love that detail, as many gravel events benefit from a smaller tire. I suppose it’s sixes on the Isospeed decoupler. Hey, Trek put a lot of engineering thought into making the perfect bike, can ya blame them? 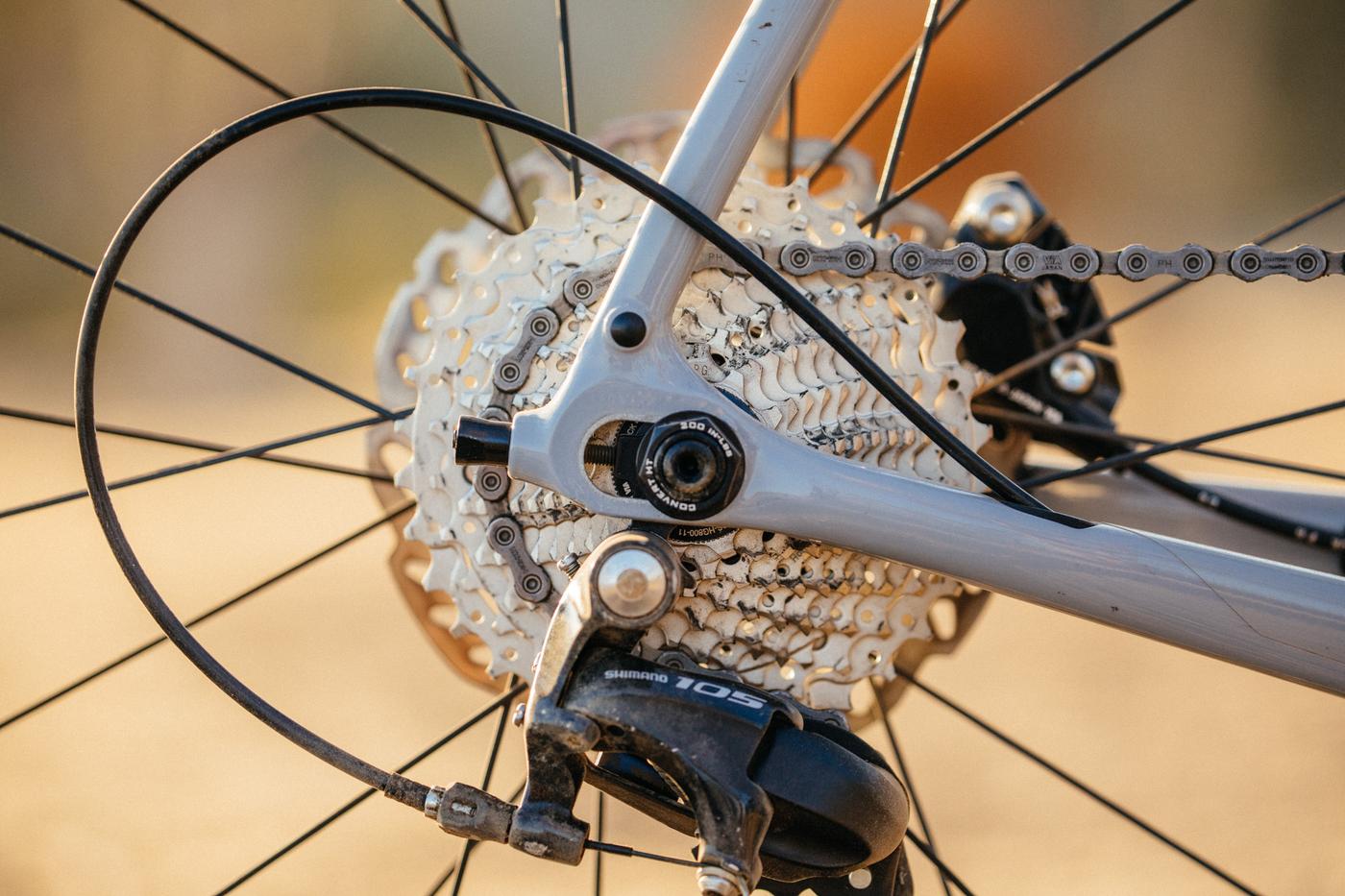 Another feature that will be polarizing is the Stranglehold dropout: perfect for converting the bike to singlespeed while offering a secure contact point for the bike’s thru-axle. I see something like the Stranglehold and I see time spent on the side of a road, in the dirt trying to fix it, but truthfully, after riding the bike for an extended period of time, it gave me zero issues. 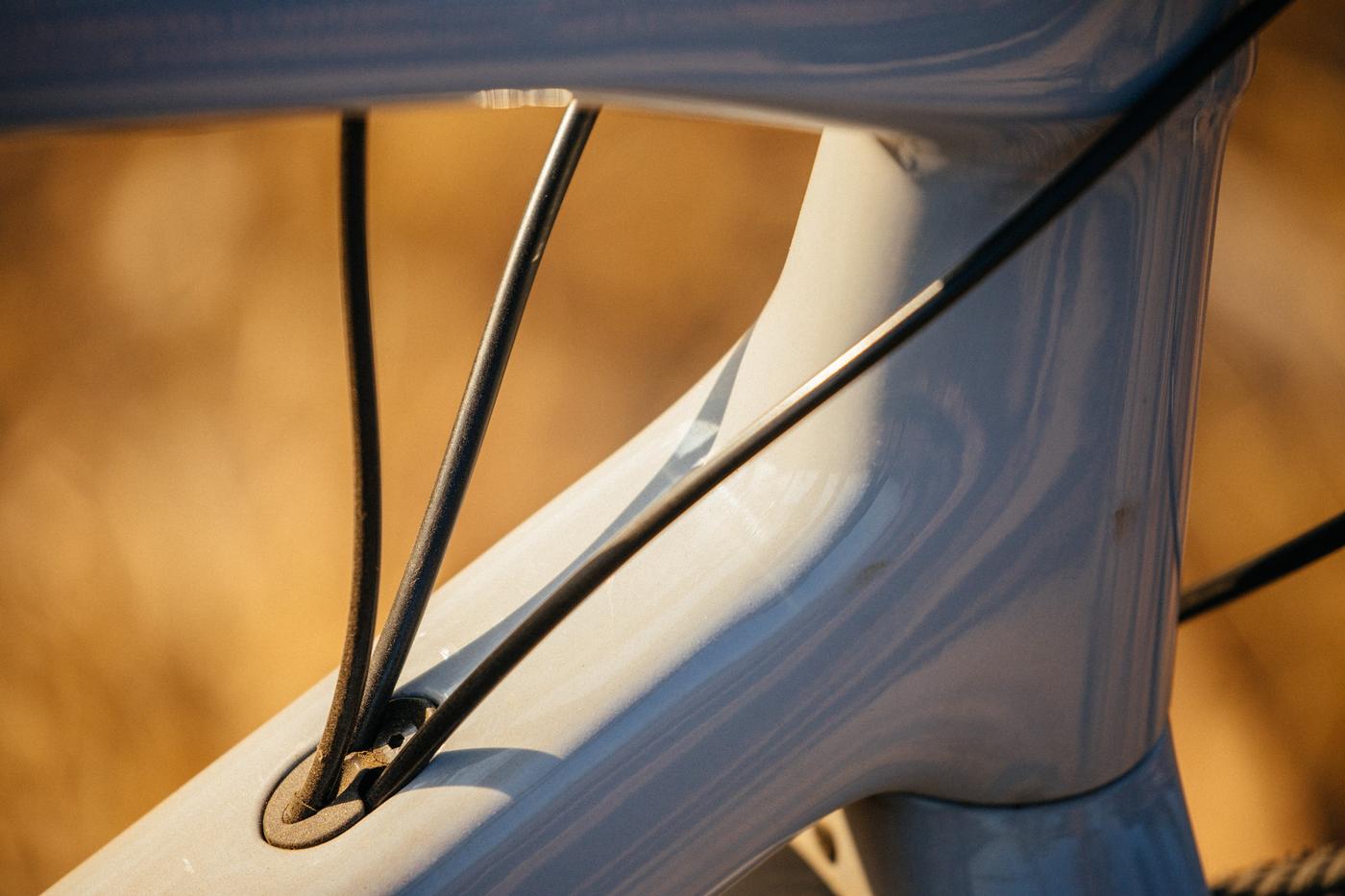 For a bike with a ton of details, I will say, the only thing I don’t like about it isn’t a fault of the Checkpoint and in fact, it’s just something I don’t like about modern bikes in general. I’m not a fan of internal routing. Sure, it makes the bike clean looking, but it’s a hassle. A hassle to travel with, to tune, to set up, and to maintain. I’d rather have the cables on the underside of the downtube, easy to lube, easy to uncouple, and easy to maintain if you’re on a tour and something happens. Like I said, I can’t blame Trek, because that’s what the industry does with carbon bikes, and it isn’t their fault for following suit. I’m also a stickler for the pursuit of externally-routed bikes, so it’s not this bikes fault. 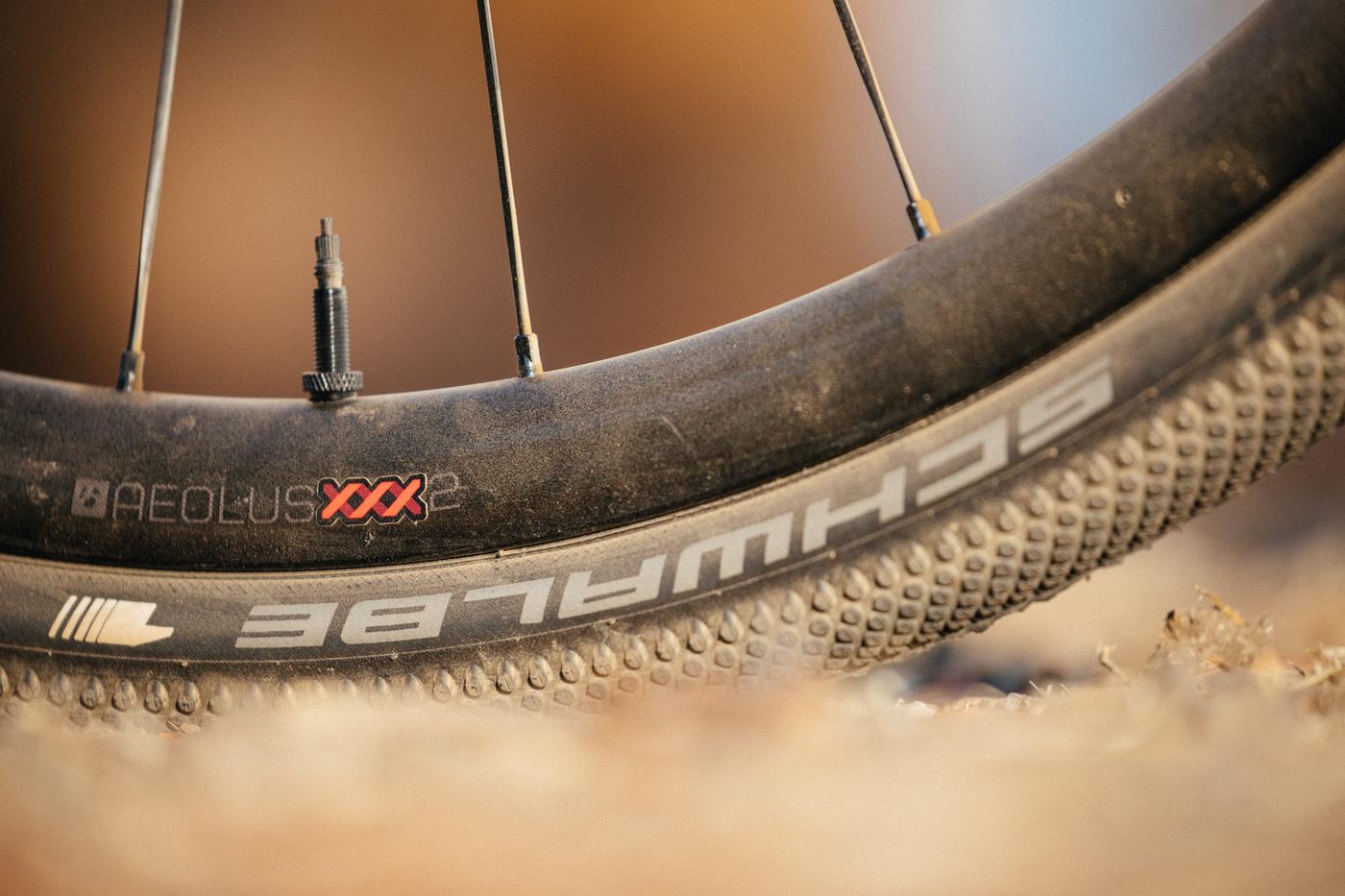 As a side-note, before we jump into the build kit, I’d like to address this bike’s wheels, the new Aeolus XXX disc all-raod wheels which are an upgrade from the Checkpoint’s standard Bontrager Paradigm Comp wheelset. A big upgrade with a price point of $2,400 for a wheelset. Carbon wheels are expensive. Yes, they’re light, but it’s not the weight that merits the price tag for me, it’s the lack of maintenance. With an alloy rim, you have to be wary of casing jumps, or hitting rocks, because you only get a few free passes of dent pulling on an aluminum sidewall before the rim cracks. With carbon, there’s less chance of a crack or a break. I’ve had a lot of luck with carbon wheels, from various manufacturers, and especially with Bontrager’s wheels, which are made in Wisconsin at their HQ in Waterloo, which is the main reason for the hefty price point. While carbon is low maintenance, it also offers a somewhat polarizing ride quality. Some people find carbon wheels on an off-road bike to be too stiff, but with my preference for bigger rubber, I hardly notice a difference. 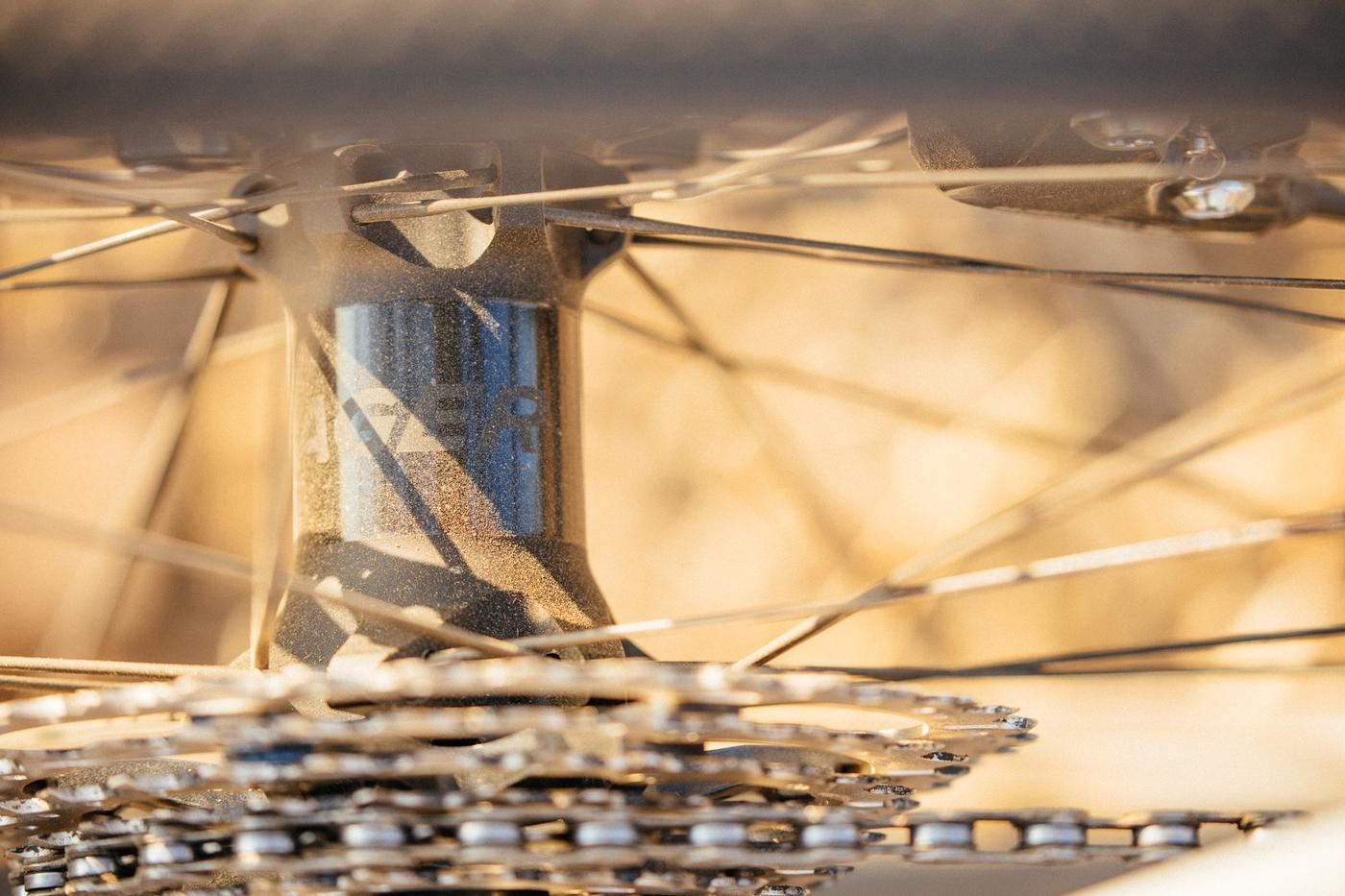 So with the maintenance or lack thereof, not being a concern, it comes down to a few other factors that make the wheels worth the investment. The first being external nipples. If by some strange occurrence, you need to true your wheels, the nipples are external, making it easy. The Aeolus platform also uses standard spokes, so if one breaks, any shop should have you covered. Also in terms of tubeless setup, these wheels were a cinch. The Aeolus wheels work as you’d expect from a pair of $2,400 wheels and if something happens, Bontrager backs it with their Carbon Wheel Program. 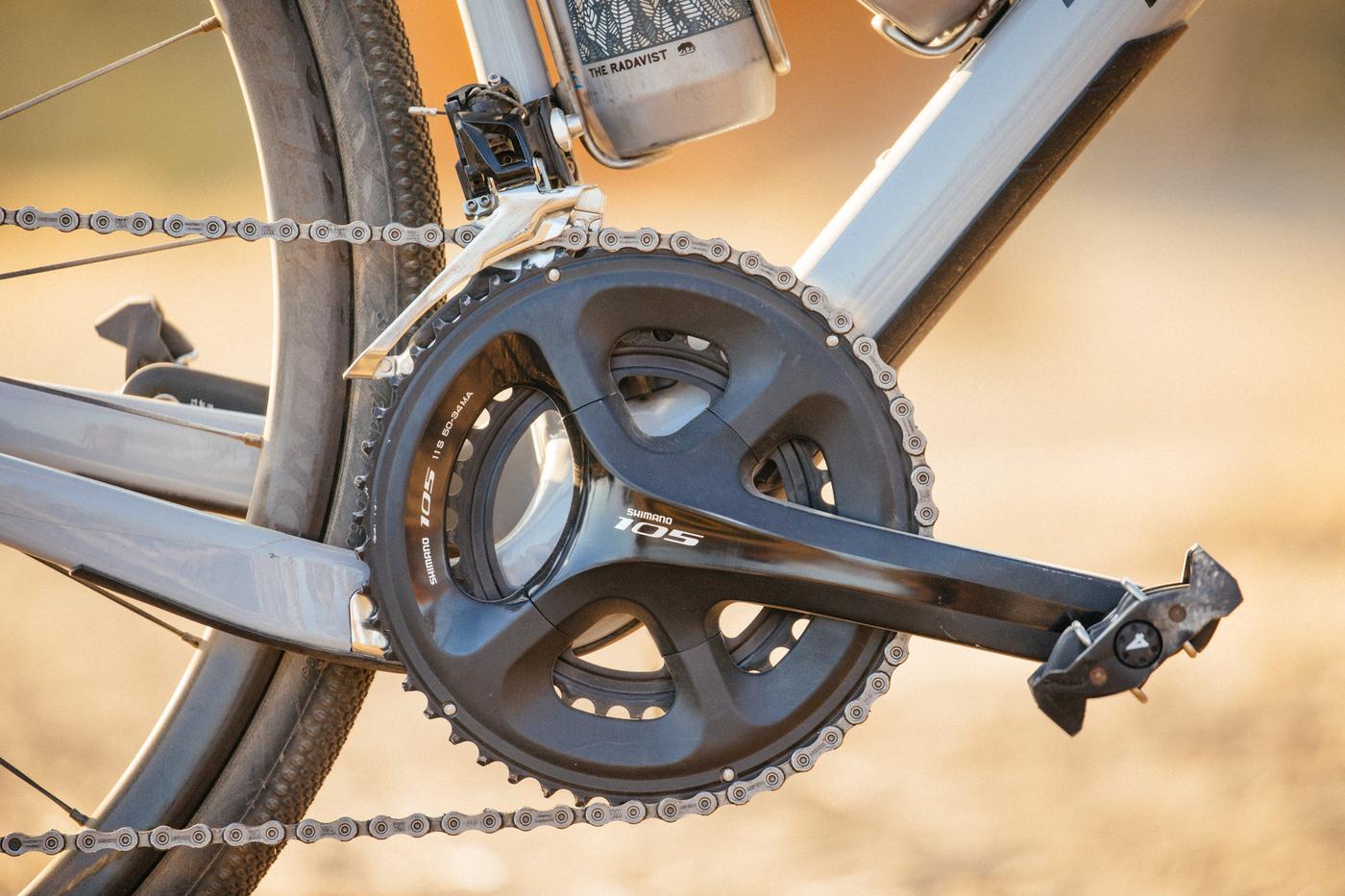 I wanted to try out Shimano 105. It’d been a while. When the Checkpoint first launched, this build kit was offered. Now, the carbon frameset comes built with Ultegra and the price reflects that. I figured there’s little difference between 105 and Ultegra, save for price point and looks, and over the years, Shimano’s groups have gotten so good, that the 105 kit looked intriguing. Honestly, I couldn’t tell the difference. At all. This no-nonsense build kit packs the seriousness where it’s needed – in the wheels and saves a little bit of money where it isn’t – in the group. Plus, the flat mount disc brakes just look damn good! 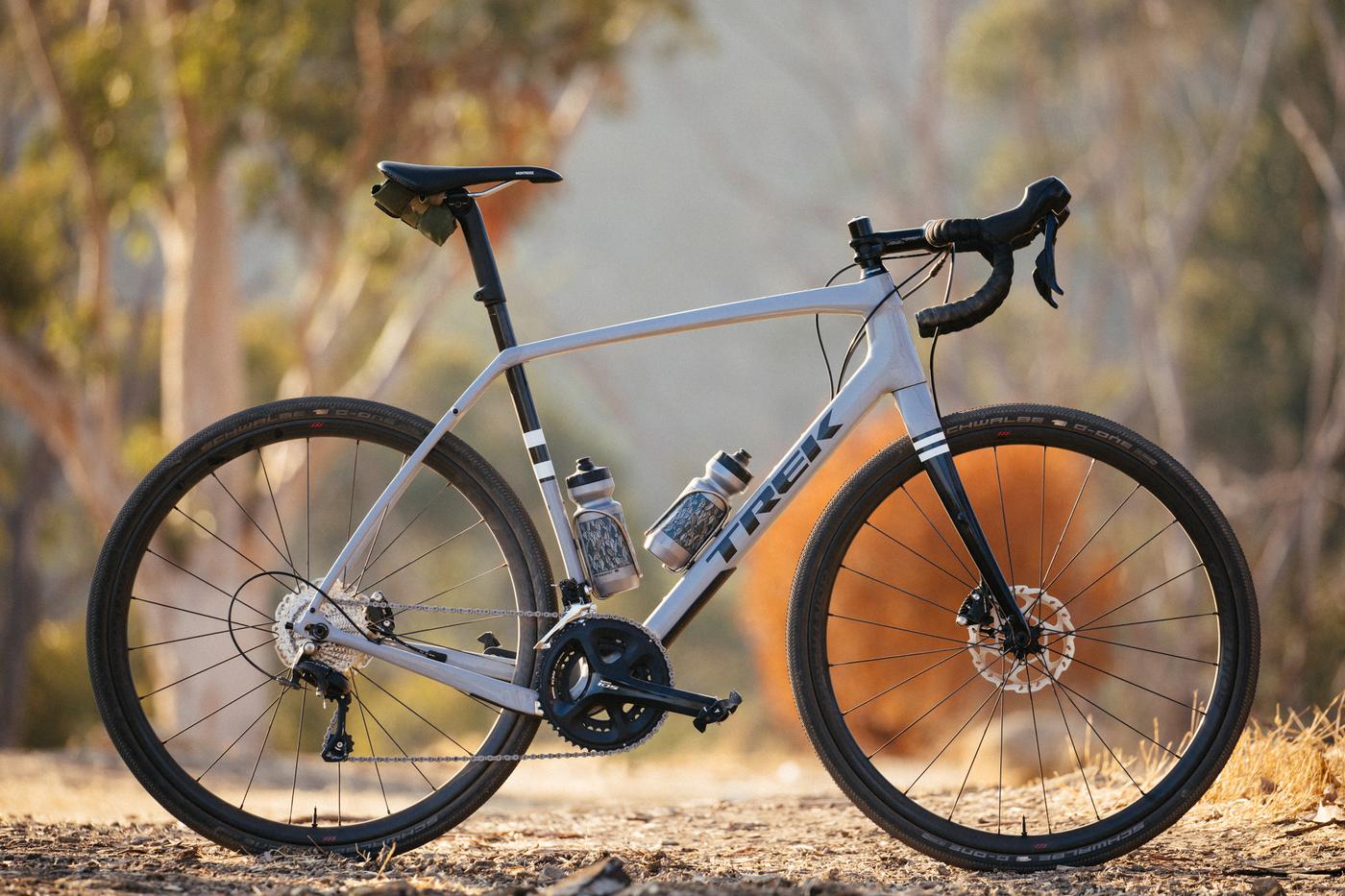 Riding the Checkpoint is on par with a lot of bikes in its category. It descends with confidence, maneuvers through city streets and singletrack and climbs as fast as you’re willing to push it. During the review, I forced myself to think about how the bike rode, only to find my mind drifting away as it should on a bike ride. This no-nonsense ride quality is only easy to achieve when it’s good. When something is off about a bike’s geometry, it’s all you think about, but when it’s dialed in for on and off-road riding, you barely take note of anythign eles. As it sits here, with pedals and bottles, the Checkpoint in a size 58 weighed 19.5lbs on the nose.

With pricing ranging from $959 for the aluminum frameset, to $1,999 for the carbon frameset, $1,789 for the complete aluminum, and $3,799 for the carbon complete, there’s a Checkpoint option for everyone. Combined with the details on this bike, there’s a usage for everyone too. While I didn’t take on any bikepacking or touring during the review period, the options are there, which is the point. They’re there, hidden under rubber boss covers, waiting for a reason to have bags, or racks mounted to them and that’s what matters. The people asked for attachments for racks and fenders on a carbon bike and Trek listened. The Checkpoint is a true boss.

The Trek Checkpoint comes in carbon, aluminum, and as a carbon frameset. Check out all the information you need at Trek!

Got questions? Drop them in the comments!