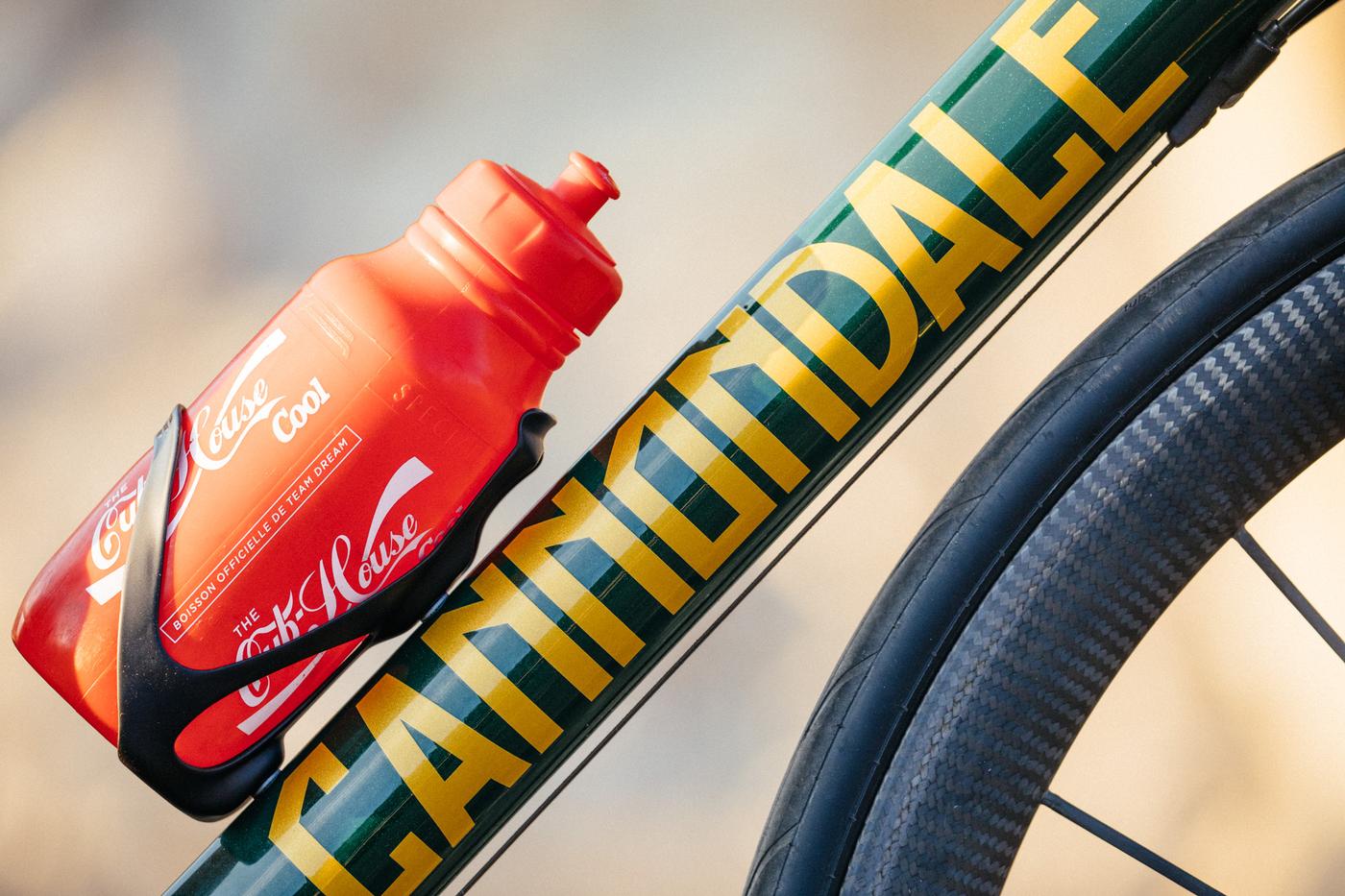 Needless to say, I was pretty excited to get the ball rolling. In the current era of “ultra cross-promotion,” pretty much everything imaginable in the world of bicycles has been done, but one can’t help notice that Cannondale has stayed rather quiet. This is actually what really drew me to working with them, they are a brand with a huge legacy in American cycling and an opportunity like this seemed too fun to pass up.

Over the months that followed, the project hit a few snags. The bike was almost scrapped entirely a few times, but luckily, most kinks were worked out (because I begged…a lot). Unfortunately, what was originally supposed to be thirty bikes became nine: the twenty-ish frames allocated for consumers were never made. In the end, only a small number of these bikes were produced for Team Dream Family members. The existing bikes are still individually numbered out of 30 (1/30, 2/30, etc.), which makes them even more special to me in a weird way, like an “error” baseball card or mislabeled vinyl record. I think it’s actually cool. 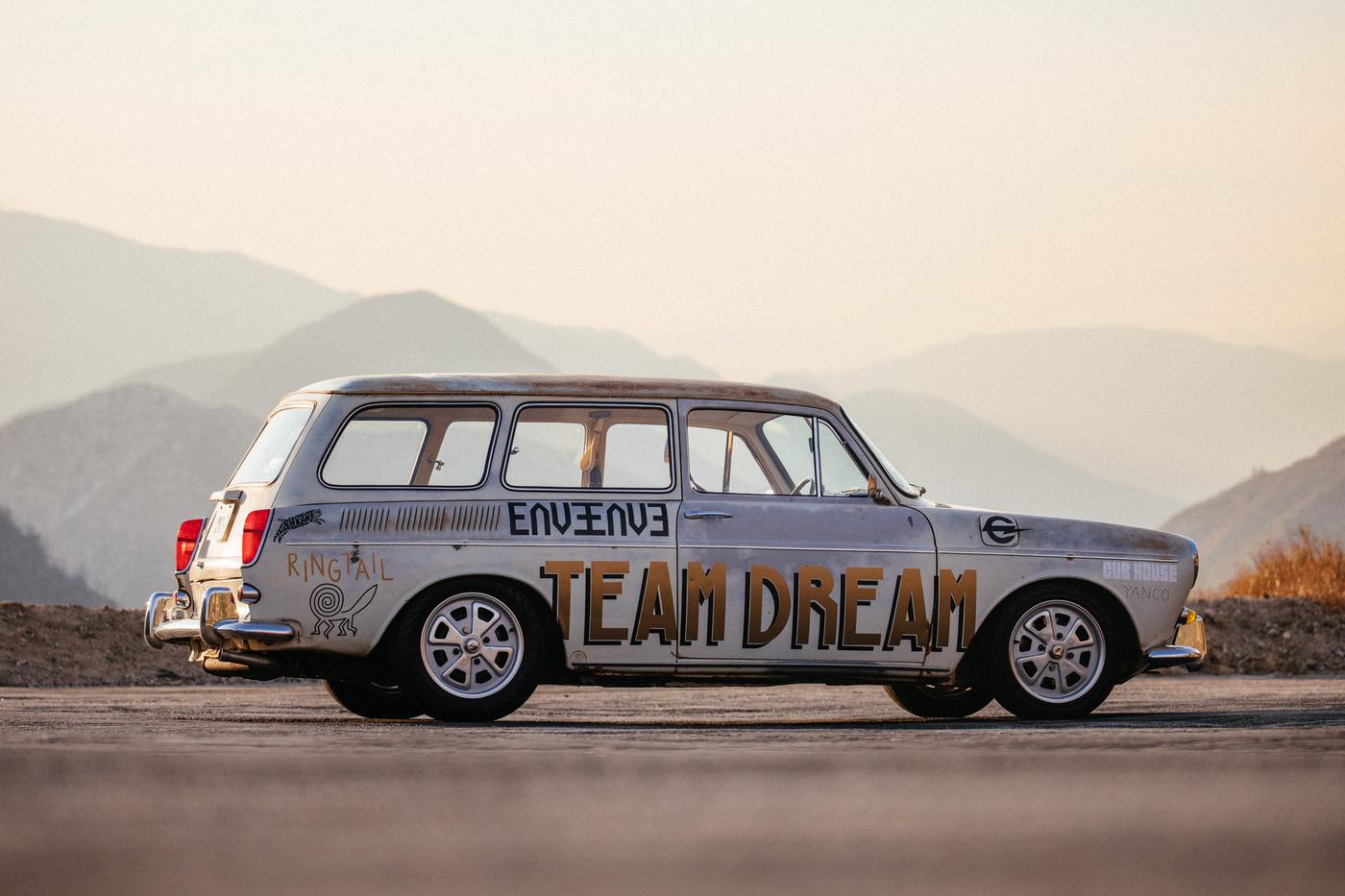 As far as the visual goes, I wanted to create something bold but without an overwhelming amount of design elements, so I kept the frame very clean. I knew we would soon be building a Team Dream “Team Car,” so creating a vibe between the two seemed like a good idea. By using our Team Dream type and Lotus-inspired green/gold, I was hoping to create something bold with minimal elements. The fork, of course, is a different story altogether. 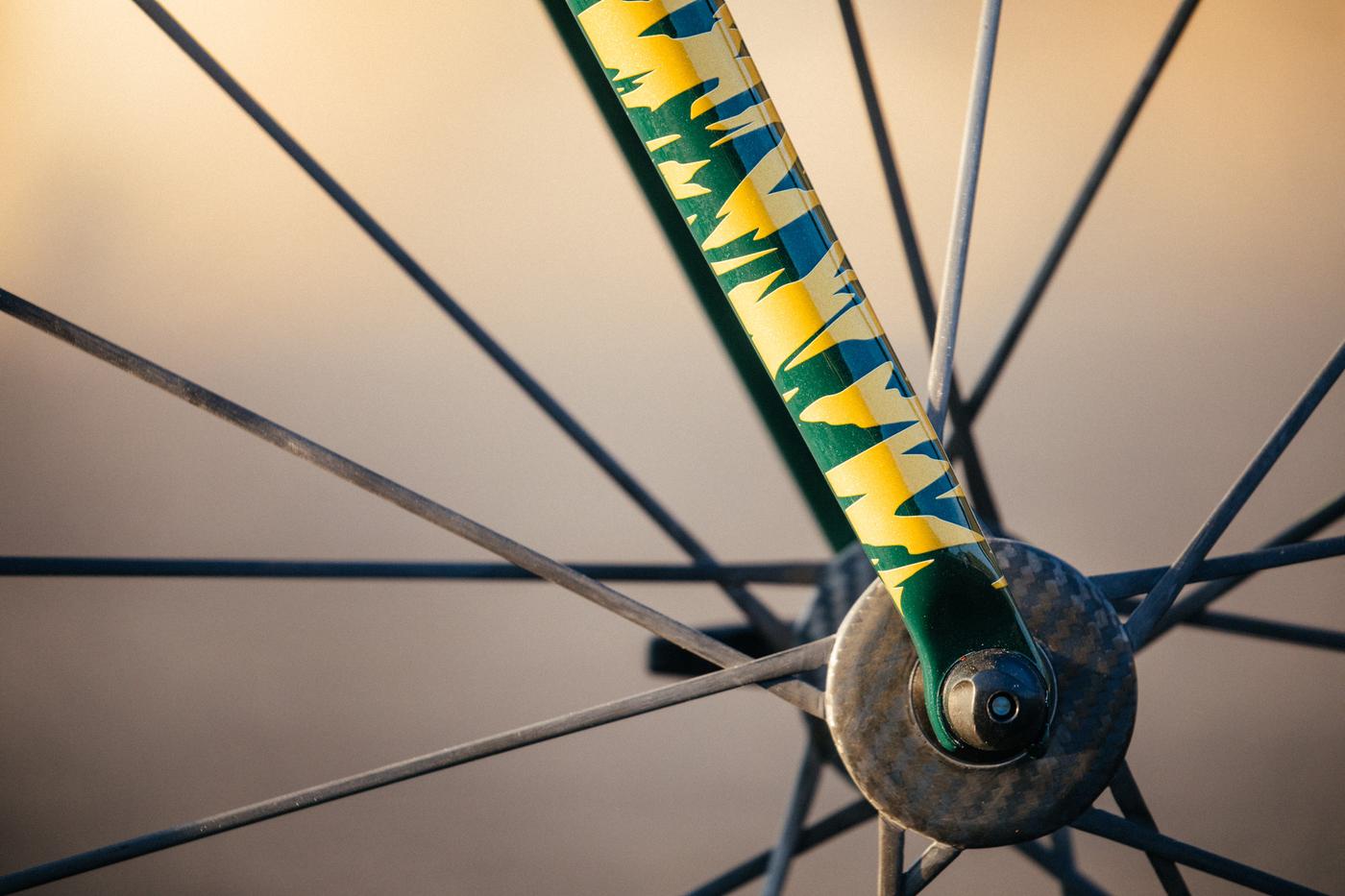 The fork on the latest generation of SuperSix is my favorite part of the bike. It has a very classic look. The pattern on the fork was created by Devon Tsuno. Devon teaches art at CSU Dominguez Hills, and if his work looks familiar, it’s because he is a cyclist who has also collaborated with some amazing creatives in the bike world. I’ve known Devon for quite some time, so I figured he would be okay with the pattern being used. I think we’re both fans of some of the wild Death Spray-style forks paired with really minimal framesets, so I knew we would be on the same page. When I asked if he wanted to see the finalized design before approval, he declined. His only request was that I “make the bike look good.” Devon is, for sure, the best kind of person to work with! 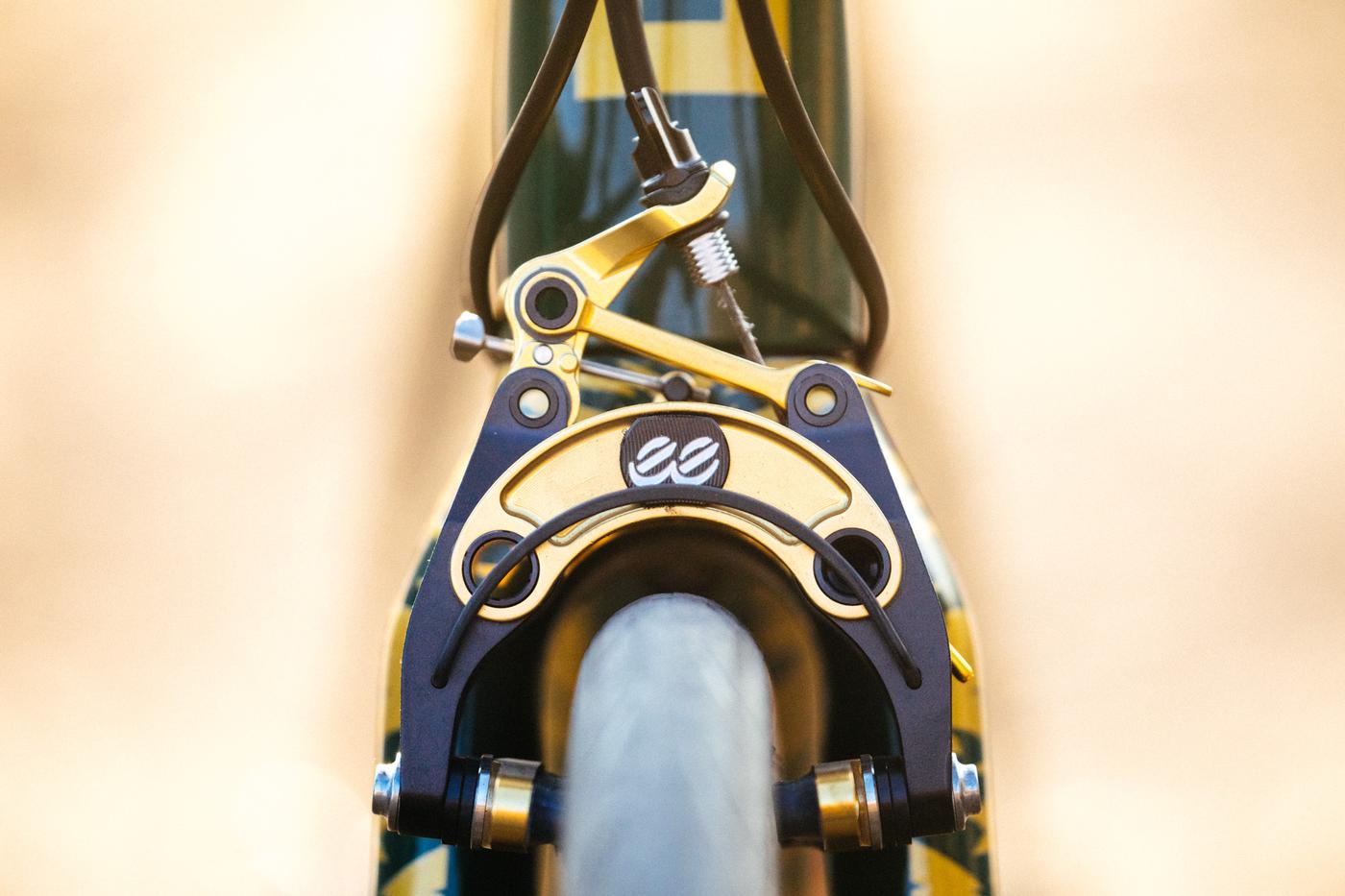 If you couldn’t already tell, I called in every favor card available to make this bike Gucci. The wheels are that new-new Mavic Cosmic Ultimate (tubeless) prototypes. They are insanely light at under 1300 grams (sorry for the weenie roadie talk…ok, no i’m not!) These wheels and the featherweight EVO Hi-Mod frame are primarily responsible for the finished bike weight of about 13.5 lbs with pedals. The brakes were made specifically for Team Dream by eeCycleWorks. There are literally only 25 sets in existence and we have all of them, ;) They’ll be available during our Surprise Holiday Launch Release sometime in the next 7-10 days. Fizik surprised me at the last minute with an Antares Versus Evo 00 Saddle to try out. 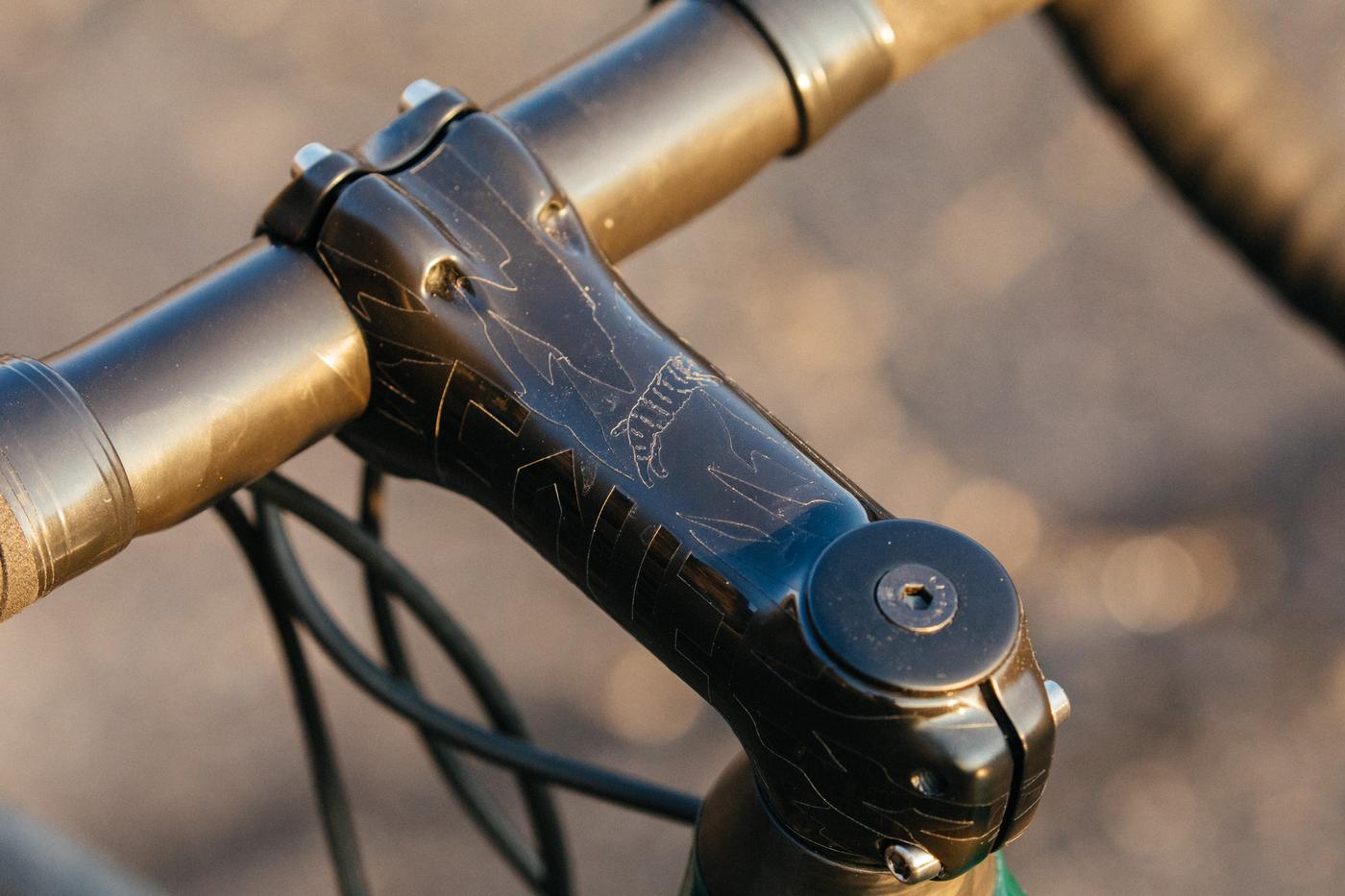 Enve / Spectrum Paint and Powder Works were kind enough to help us create our own cockpit in the matching team font so the type on the frame matches the cockpit. The stem also features the same water pattern design by Devon. Altogether, I’m really happy with how this bicycle turned out and proud to have the Chubby Bobcat represented in conjunction with such an iconic brand. I would like to thank everyone who participated in helping to make this happen and of course a shout out to Lebron for going halfsies on lunch (it was a wonderful afternoon). Next time I’ll tell you all about the time 50 Cent and I shared a Vitamin Water. The bike in these photos is mine: it’s number 1 of 9…or, almost 30, depending on how you look at it.