It was with a heavy heart and lots of FOMO when I admitted to my friends at Giro that I wouldn’t be able to attend Grinduro Scotland. That’s when the gears began to really spin…

Let’s backtrack a bit. Grinduro debuted two years ago in Quincy, California as a new race format. Rather than racing a course in its entirety, there would be a handful of timed sections, of which, the leaders would be chosen before ultimately awarding winners in various categories. This allows for plenty of on-course downtime, which leads to camaraderie, substance consumption of various forms, jackassery, playful shit-talking and other social activities often absent from competitive cycling events. For two years, Grinduro California has proven to be a success, leading Giro’s UK partners to begin exploring options for an exotic Grinduro getaway. 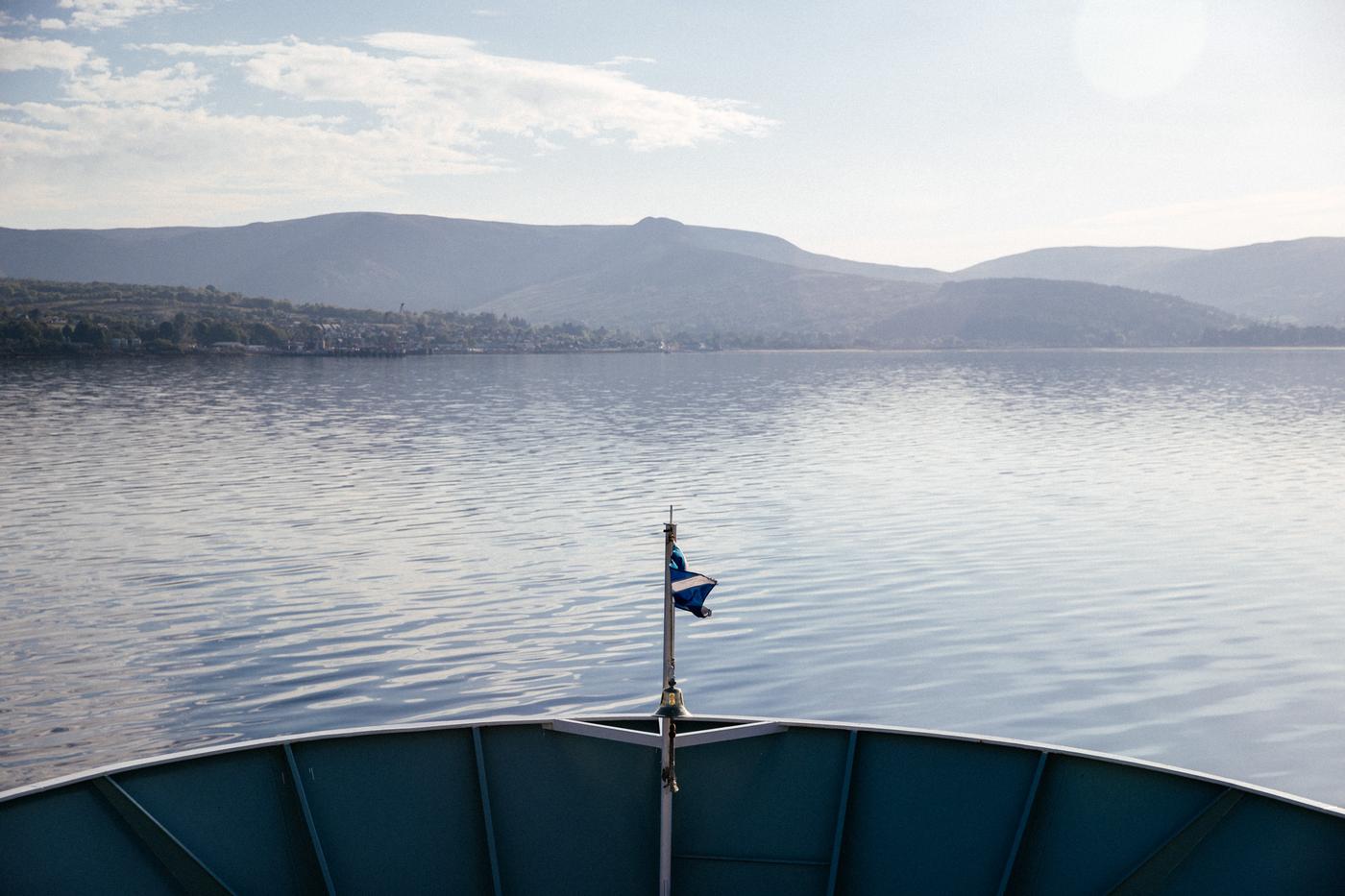 This is where Focal Events comes into play. They organize some of the gnarliest (that means good, but tough for the UK readers) courses in the area, including the Dirty Reiver race and other really, really, really fun events. The team at Focal selected the Isle of Arran for its plentiful trails, tracks and roads, as well as its solitude. You see, the Isle of Arran is a perfect mix of “out there” and “right there.” A short drive from Glasgow to a ferry brings you to this island and within minutes, you can be on pristine gravel roads, plentiful enough to make even the most hardened endurance athlete froth at the mouth like a pint of Guinness. Don’t mind the horrid UK euphemism, there will be plenty.

Like its US counterpart, Grinduro UK is a bike race, and more. Yes, that sounds cheesy, but it’s true. There’s a Grinduro village, a pop-up community nestled in Lamlash on the island where camping is free to race entrants, food will be served, booze will be had, bands will play, and plenty of other pre and post-race distractions will take place. It’s in this village that three frame builders will present their ideal Grinduro bike, which they will race the course on. Giro is dubbing these builders “the Bicycle Academy builders.” The builders are Donhou Bicycles, Feather Cycles and Mercredi Bikes. There will also be brazing clinics by Andrew Denham from the Bicycle Academy where you can watch a demonstration and then braze your own bottle opener or key chain. Registrants who sign up for Grinduro by June 15th are entered into a raffle where they’ll win a free frame, made by Andrew, along with a build kit from SRAM and Fabric. 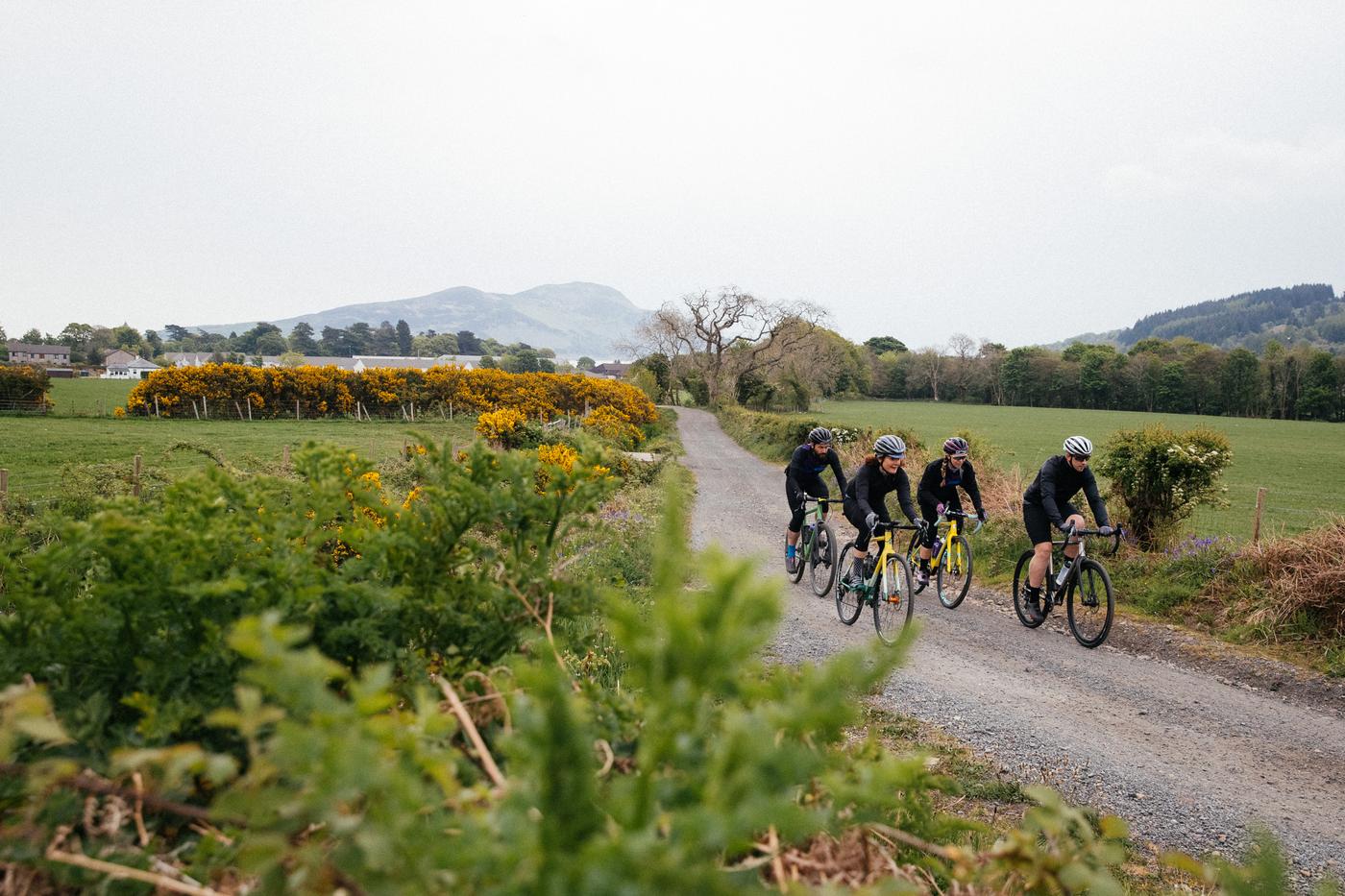 Five of us ascended upon Arran with anticipations of a glorious pre-ride photoshoot. Myself, Amanda from Giro, Adeline from Mercredi Bikes, Neil from Fabric and Paul from Focal Events all kitted up, dialed in our bikes and took off to the green hills for a day of riding. Ok, this all sounds fine and dandy, but what’s up with the course? How’s it compare to Quincy? Well… The Sierra Nevada is a force to be reckoned with. It’s its own beast and one that has claimed plenty of able-bodied riders. While Grinduro Quincy packs a punch in terms of climbing, the Scotland course was surprisingly difficult in its own, unique way. The Isle of Arran doesn’t have mountains per se, but the amount of elevation was making my legs scream. Personally, I’d rather climb for 25 miles in a pack of riders than deal with the constant – and steep – climbs on the Scotland course. It’s tough, yet not impossible, obviously. The terrain is beautiful, the views, stunning and best of all, it’s challenging, while being entertaining. All this within a tiny island, packed with rich history, tasty whisky, surprisingly good food and powerful landscapes. If that didn’t answer your question, here’s a short paraphrase: in Quincy, Mt Hough is the challenge, in Scotland, the entire Isle of Arran is out to get you. 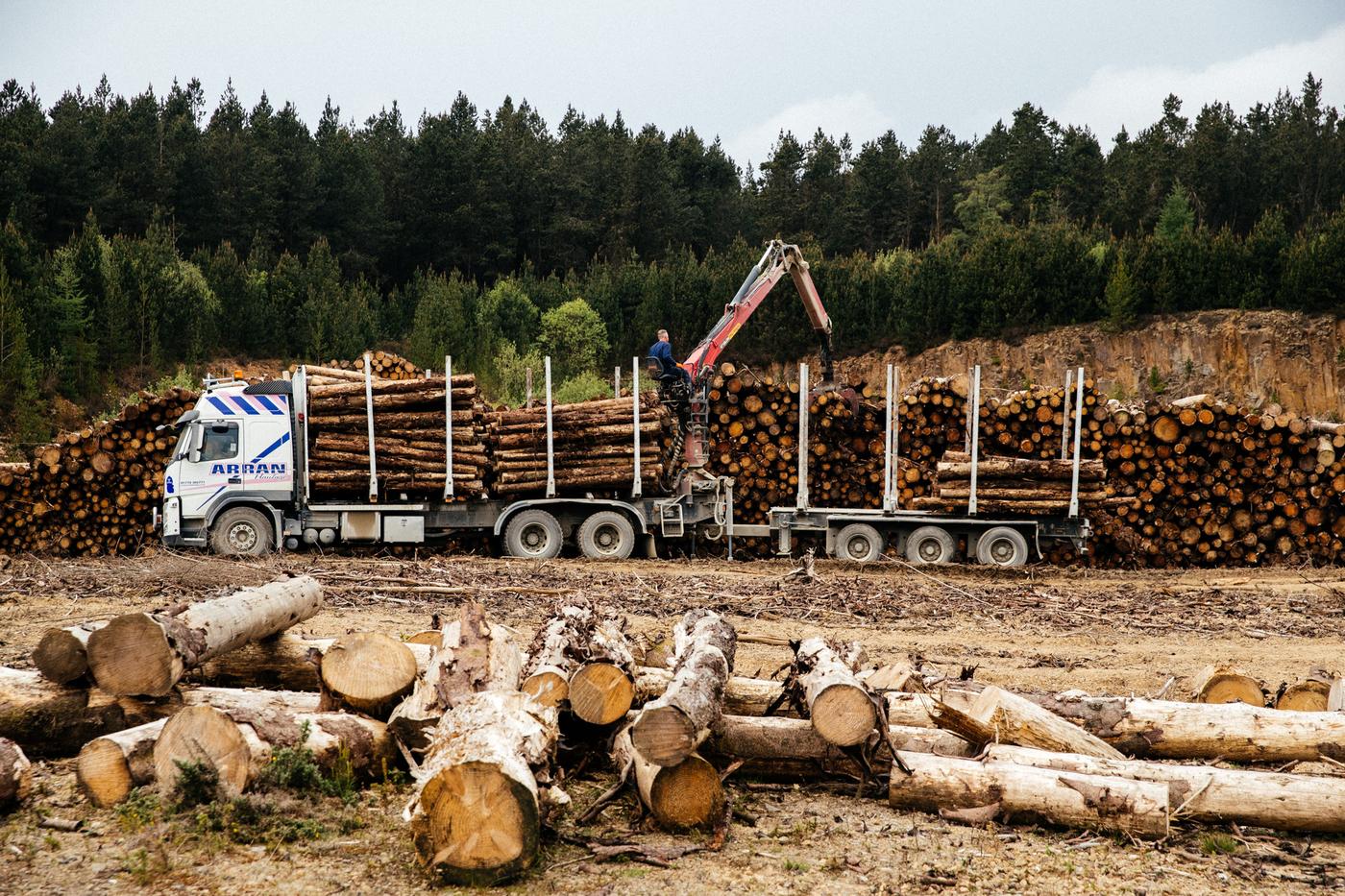 Even though thousands of miles separate the two courses, there are various similarities, the most notable being the logging industry that’s ever-so-present on both. 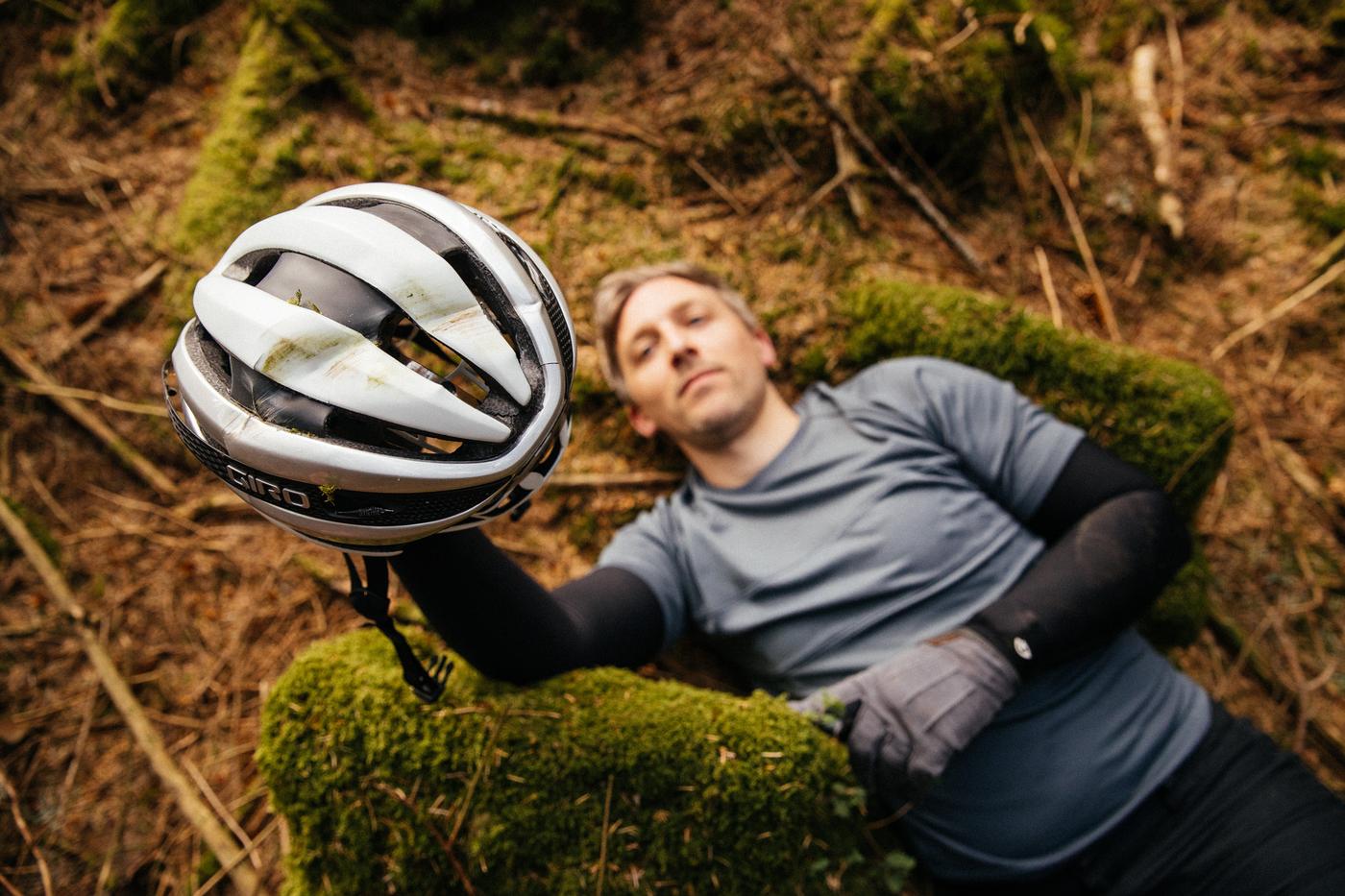 We rode half the course before a crash took out Neil. Then, the weather changed as swiftly as a pack of wild hounds on a bloody fox, leaving us to outsmart and outsprint a killer storm. When it was all said and done, we finished in town, had a pint and hit the hay, hard. All that was left was a bit of tourism, taking us to the Isle of Arran Distillery, various historical sights, the Arran Brewery and finally, back to our hotel to recover from the lactic acid fermentation taking place in our legs. 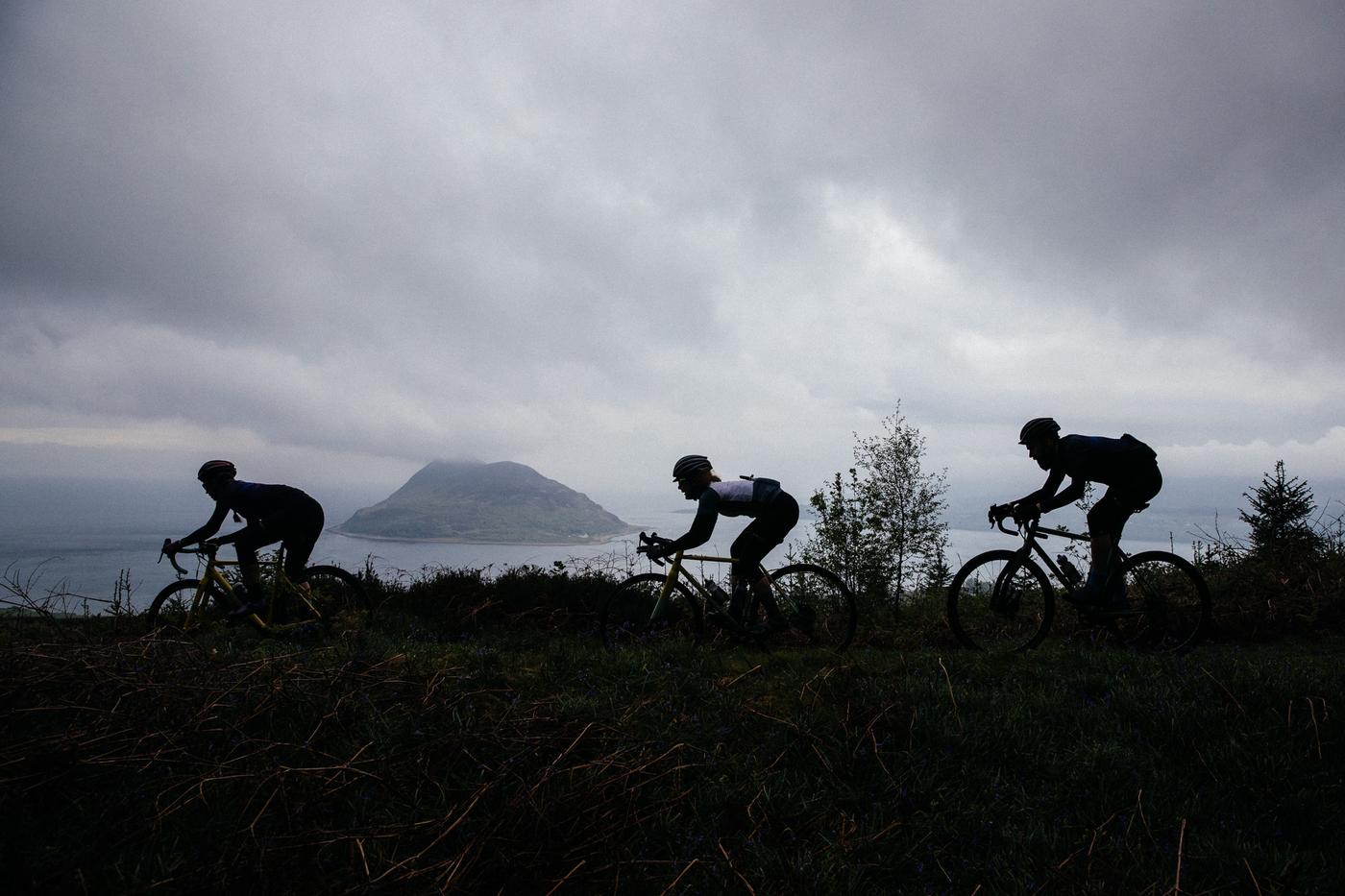 I can’t say I’d want to do the course in its entirety again today, but given the circumstances, I’d love to return in July. Unfortunately, my pre-summer scheduling locked me into a trip that I can’t miss. Perhaps I’ll send someone else from the Radavist for some reportage, and perhaps, some of you reading this will take place in this event, prompting your own review in the comments below, post-ride. Whatever the reason, hopefully you find yourself on Arran, engaging in this event, you won’t regret it.

Check out more information at Grinduro, sign up at Results Base and get your bike ready! Oh yeah… which bike would you ride after seeing these photos?