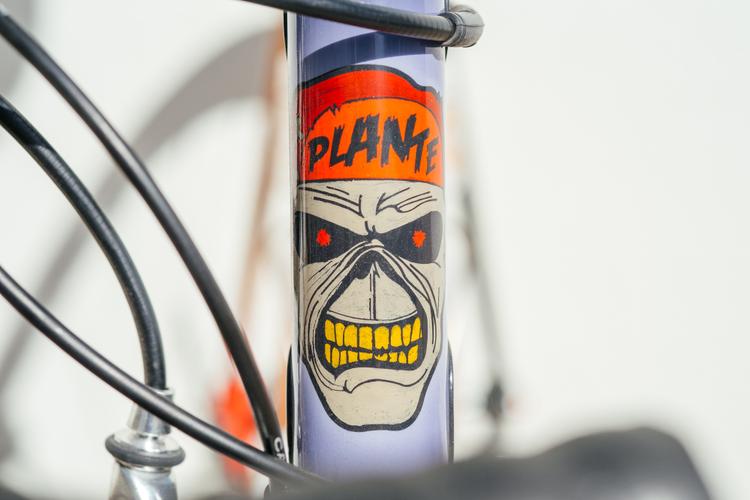 Everyone loves a good Maiden homage. When Stephen decided he wanted to tackle the world of custom framebuilding, he headed to Yamaguchi‘s school to learn from arguably the best. Back in 2015, he left his home of Rancho Cucamonga for Rifle, Colorado to attend Yamaguchi’s class. Along with him he brought a set of Paragon road dropouts and began learning how to cut, mitre, lug and fillet braze. The result is this “traditional” road bike. A 1″ steerer, non-oversized diameter tubing road frame, with a lugged head tube cluster and fillet brazed rear triangle.

Upon completion, Stephen sent the frame to Jordan Low with a note: make it Iron Maiden themed.

What an incredible race promo video! Wait for it… See more at the Crampi Race III’s Facebook page.

One of the most metal alleycats ever is returning from the crypt this year in Sweden. The Svart Katt is coming… and if you’re able to make it, do so. In the past, this race has been insane.

Each year, my friends in the band King Dude roll through Austin for a tour of some sorts. Whether it’s a festival or just a quick stop through, I always look forward to having them around. Usually they crash at my house and we get to drink bourbon and hang out. I like to think that it’s a bit of a break from the chaos that is touring across the country in a van.

This tour in particular found them opening for Ghost, the Swedish stadium NWOBHM band. While I haven’t been into Ghost all that much, I will say I really enjoyed their live act and stage antics. They packed out Emo’s East in Austin and put on one hell of a show. The fans were sooooo into it!

Each of these bands have been busting their asses on the road for the past two weeks and tonight’s the first stop on their east coast tour. If they’re coming through your town, give them some love. Also, you can now pre-order King Dude’s newest record, Fear at TJ’s label, Not Just Religious Music. 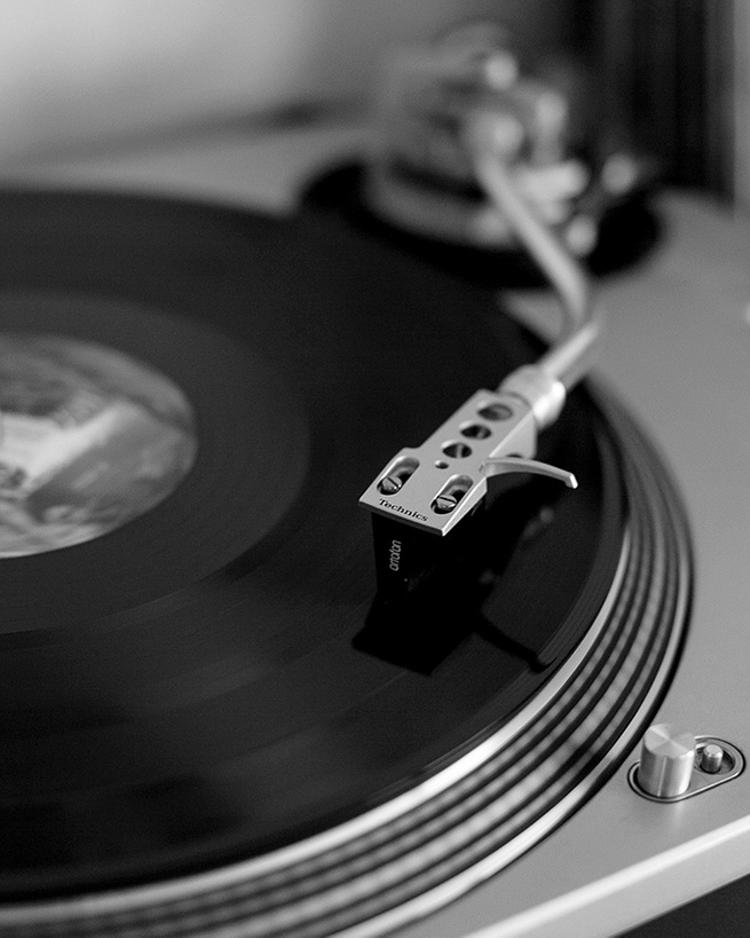 Fuck it. This is too good to not share. Does this mean I’ll be doing Tuesday Teardowns every week? Maybe. But no promises.

These racks take a lot of time to assemble. After each piece of stock is mitered and cleaned, it gets hand-welded. Alan posted this photo of a pre-welded rack. They’re pricey but if you want to bike the bullet on one, do so here.

But man, do they look rad! 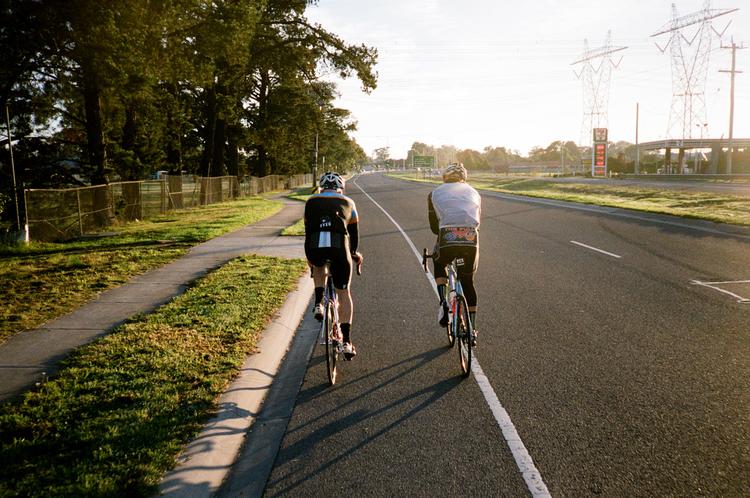 “Local access only” is not to be confused with “locals only”. If there’s one thing to be said about Australians its that they love to show visitors how great their land is. Land is something that’s very ethereal these days. Tourism changes the way one interacts or engages with a place. For example, a surfer would have a very similar experience as a cyclist in Australia but a businessman or businesswoman might have a different perspective altogether.

As cyclists, we look for the most anti-social areas to socialize. No one wants to chat on a busy street. #NotBeachRd. We look at cities differently and while many people prefer the beaten path, some head out down roads with no KOM, no segments and no social scene. I’ve been very blessed to be given such a unique view of Victoria and over the years have met some great guides.

This roll of film was lost. Ok, not lost, just in the bottom of my film container in the fridge. It contains some moments from rides, a Black Breath show in Melbourne and some other randomness. Check out the narrated photos for the full story. 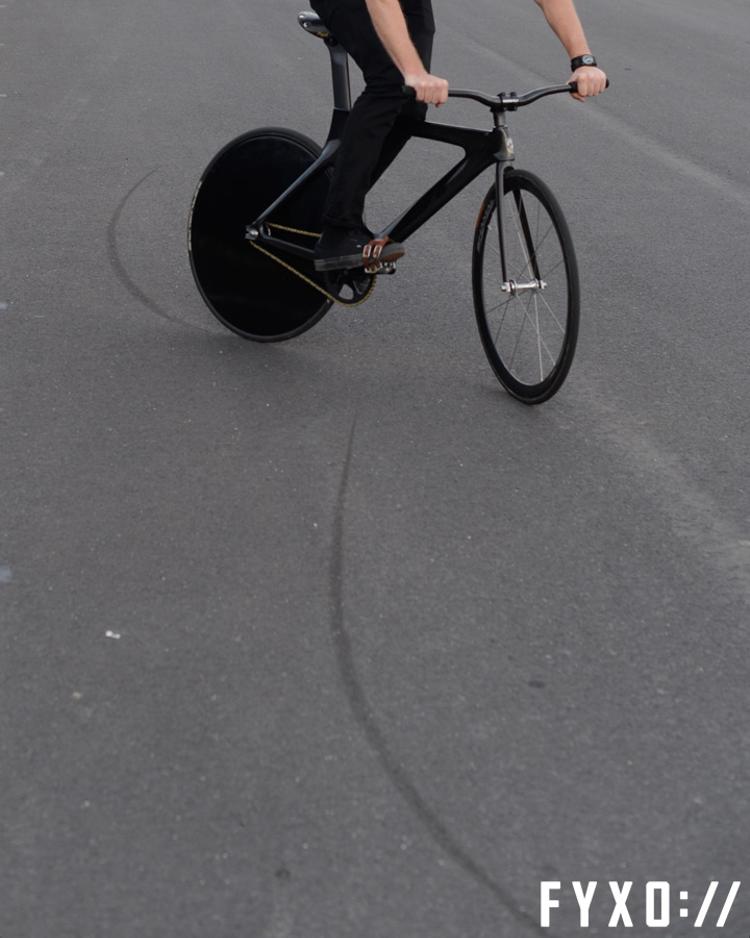 It should be “Full Backwards Circle”.

Ride whatever you want, when and how you want to. I think that’s the moral of the story here. Thanks to FYXO for the impromptu photo shoot. Check out more words and photos at FYXO.  Oh and to the assholes who stole my bag in SF, die. I’m going to miss those jeans and that t-shirt.

Look, I know this is a very metal kit and some of you aren’t into metal. TOO BAD. Even Tracko wears this kit and he’s as hippy as they come. Since the last run of the Endo Customs-made Necronomicog kits, I’ve received a ton of emails asking to do another run. Well, you’ve got a month to pre-order this time and I even listed it close to payday.

You have until June 1st to place your order. Expect shipments mid-July (maybe sooner).

These kits are made in Los Angeles from only the best quality materials. Almost every kit I wear is made by Endo and I wouldn’t use anyone else!

It’s been a while since Patrick Seabase put out a video but it was worth the wait. The climb is serene and shit gets real around the 4:30 mark. Black metal and track bikes will always get a rise out of me. Well done man.

THIS is pretty metal and that’s one sick bag. Always good things coming from the REload camp in Philly! Who’s gonna win it at Monster Track this year? 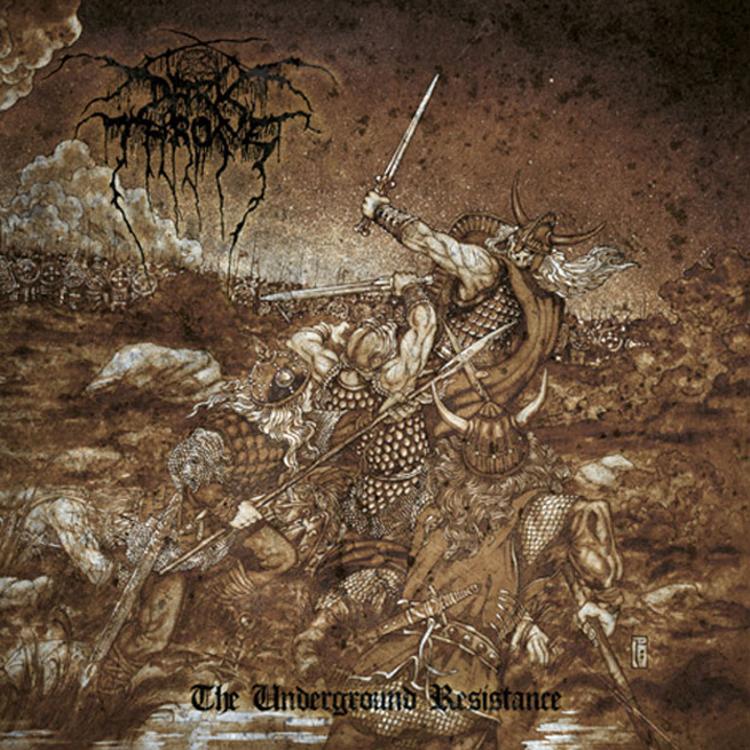 Everyone that thinks Darkthrone was better when they had their brief affair with black metal might as well not even continue with this Tuesday Teardown. Back when F.O.A.D. hit, it was greeted with high amounts of cynicism from people expecting more of their death / thrash / black metal cross-over melee. F.o.A.D. marked a key point in Darkthrone’s timeline: they started to have (even more) fun with music. Then came Dark Thrones and Black Flags, one of the best punk / d-beat albums of 2008. Finally, in 2010, the band’s magnum opus, Circle the Wagons hit, blowing everything else out of the fucking water (I’m being a bit partial here). It is still one of my favorite all time albums. Ever.

Each of Darkthrone’s albums have experimented with metal in various states, so a NWOBHM album shouldn’t surprise anyone. That’s exactly what The Underground Resistance is pushing and I fucking love it. So far, the whole package looks great. The first single “Leave No Cross Unturned” is the last cut on the album and with a howl Fenriz and Nocturno Culto kick it into high gear. Typical of their previous releases (mention Sarke, mention Sarke), Fenriz wrote half of the songs and Nocturno, the other*. So far, I like what I hear! I ordered the vinly and t-shirt package from Peaceville last week!

The Underground Resistance was mastered by Jack Control at Enormous Door, here in Texas and the artwork was penned by Jim Fitzpatrick. Check out the first single “Leave No Cross Unturned” below. 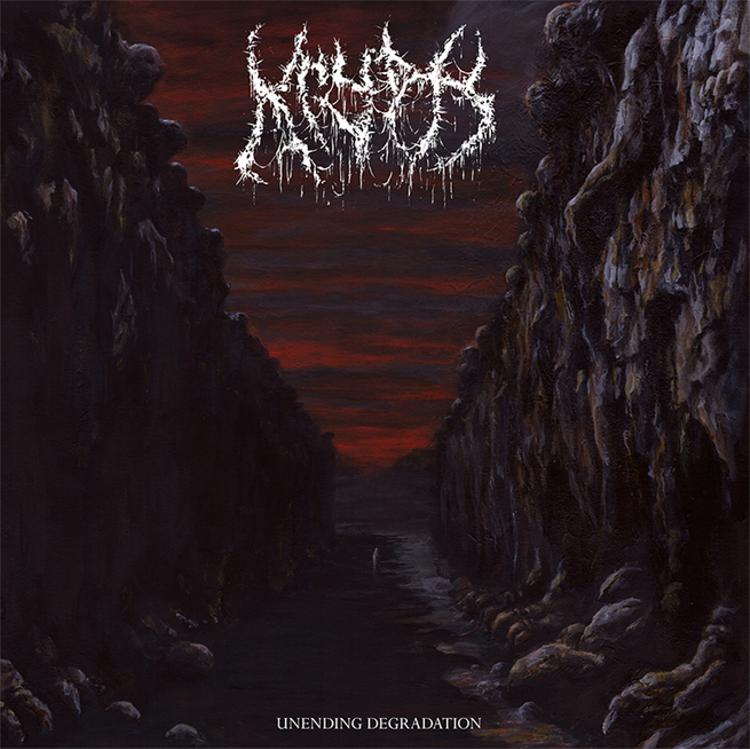 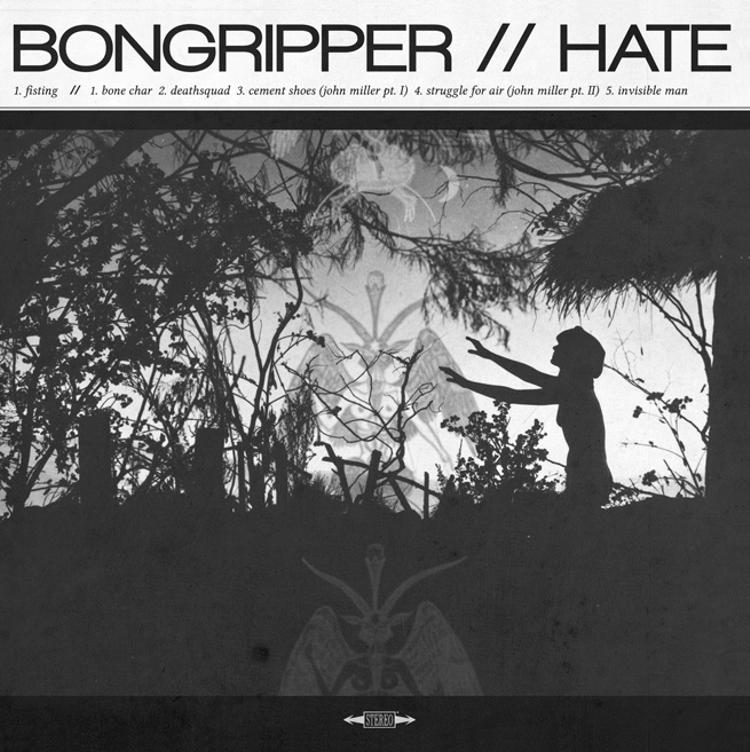 Bongripper? What do I have to say about Bongripper? For starters, I’ve been a fan of these Chicago doom destroyers since I first heard Hate Ashbury in 2008. Then Satan Worshipping Doom hit me in the gut in 2010. The intense momentum this fucking band has picked up since then is insurmountable. Everything they touch turns green and emits pure heaviness when sparked. After a successful show at Roadburn last year (which you can now buy their live recording here), the band has been working on re-issuing one of their classic albums, Great Barrier Reefer (also for sale now). Still, it had been a while since there was new material from the band. Their Sex Tape / Snuff Film 7″ was just enough to hold over my craving for wall-punching heaviness and now, their new split with Hate features their newest track “Fisting”.

So how is it? Fucking brutal. It’s difficult to type this write up while the song is playing. 11 minutes of giant riffs, heavy as fuck bass and colliding percussions. Just imagine the Old Ones colliding in a battle for the last rip from the bong. Around the 9 minute work, the well-coined Bongripper riffs hit the table and the entire world collapses before a cacophony of d-beat erupts. What I’m trying to say is, this album is intense and I haven’t even talked about side B…

By contrast, Hate’s songs crack open the sky and shatter the stars. As hell rains from the heavens (yes, that is possible), you’re left picking up your teeth. It’s an interesting contrast but that’s what make splits so great, right?

Pre-order the Bongripper / Hate – Split LP here at BONGRIPPER’s site and listen to the whole thing for free at their Bandcamp, where you can also buy the digital version. 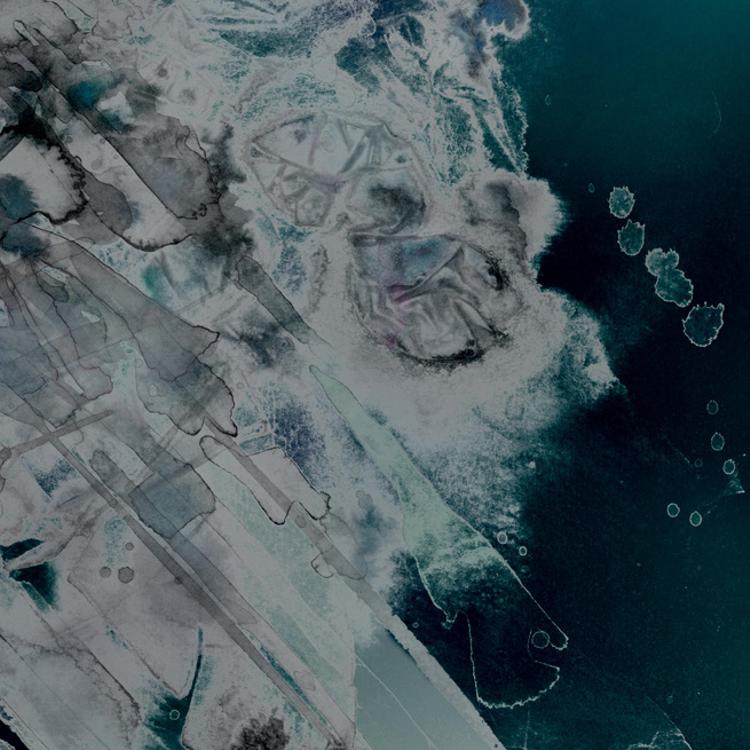 It’s only by coincidence that this week’s Tuesday Teardown pick is also on Profound Lore. Hey, I’m a sucker for USBM and SF’s Bosse-de-Nage has been on my radar for the past year or so. While re-organizing some desktop material, I came up on their latest album that I never got around to listening to (cue my discussion on vinyl vs the digital junkspace that is MP3 music). Anyway, onto post-black metal, or as Bosse-de-Nage comes to call it, grey metal. Don’t get me wrong, it’s a suitable title for this band, as is post-hardcore and for that matter, I tend to think of USBM as a little ambiguous anyway.

Check out more Tuesday Teardown below!