One of the original “all-rounders”, the Singular Cycles Peregrine first took flight over a decade ago, in May 2007, as an homage to post-war French constructeurs with modern updates like bigger tire clearances, more robust steel tubing, and disc brakes. I’ve had this bike for longer than I’d like to admit but with supply chain issues, parts shortages, and trying to align a review with more stock incoming from Singular, I’m finally ready to share my thoughts on this versatile bike. And we’re giving this exact build away in the coming weeks, so read on below 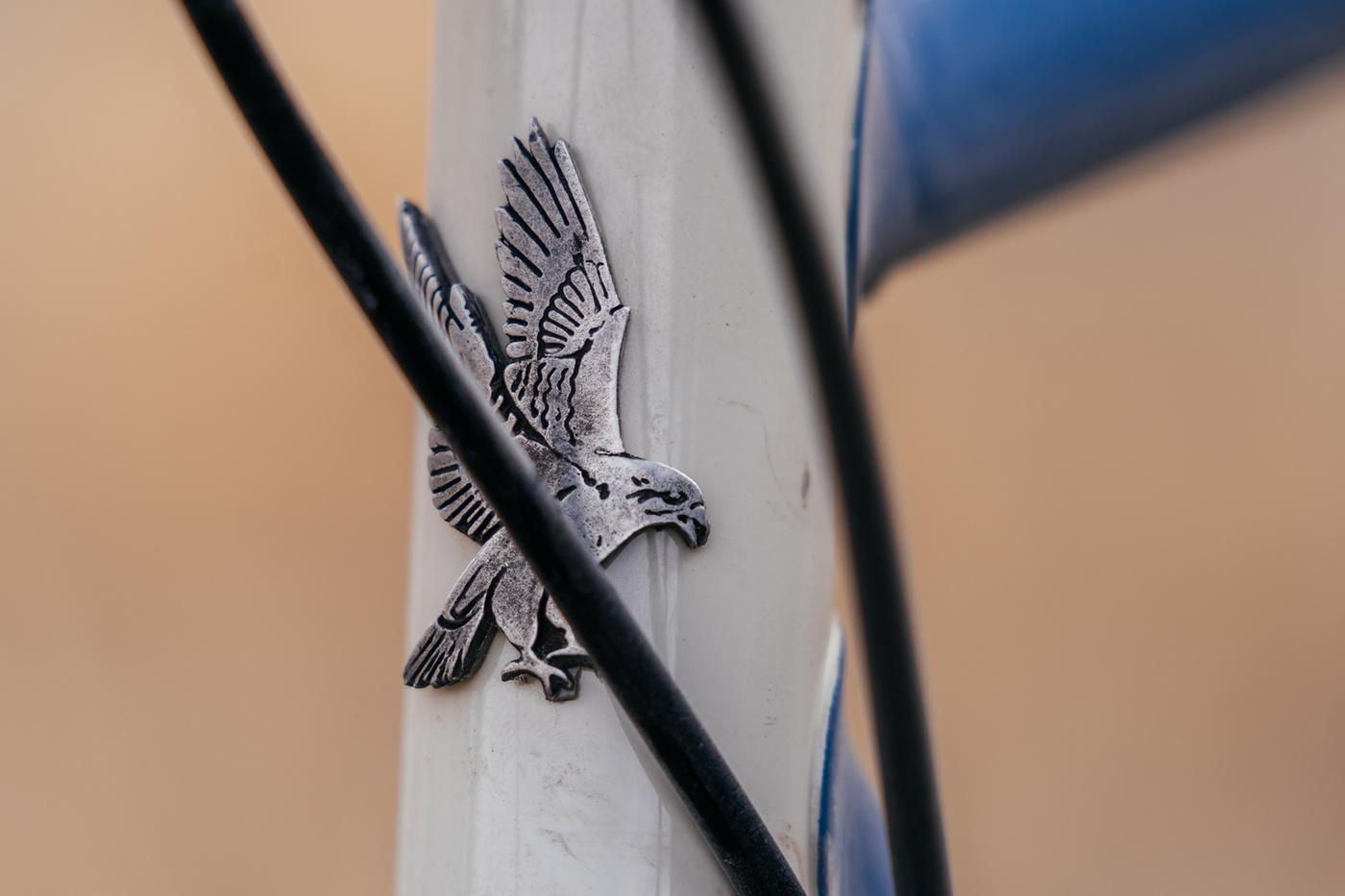 A while back, we were scouting for a photoshoot in Southern Arizona, driving along a gravel road, when suddenly a bird, about the size of a common crow began to dive at a speed so fast that Cari and I stopped the car and sat there, awestruck. It was a Peregrin Falcon, hunting some sort of blackbird. These wonderful falcons primarily hunt other birds and are renowned for their speed, reaching over 200 mph during their characteristic hunting stoop, or its high-speed dive. If you really want to go down the Peregrine… uh… rabbit hole check out this article.

When I received my package from Singular Cycles last year, I thought a lot about that experience in Southern Arizona as I built up the Peregrine, which isn’t an intentionally fast bike per se but its light-footed and nimble ride qualities surely inspire speed.

I primarily used this bike for riding gravel – taking it on our many mixed-terrain rides in Santa Fe testing both the bike and the Microshift AdventX drivetrain. I’ll get to the review of the AdventX kit shortly but let’s look at the steel chassis first… 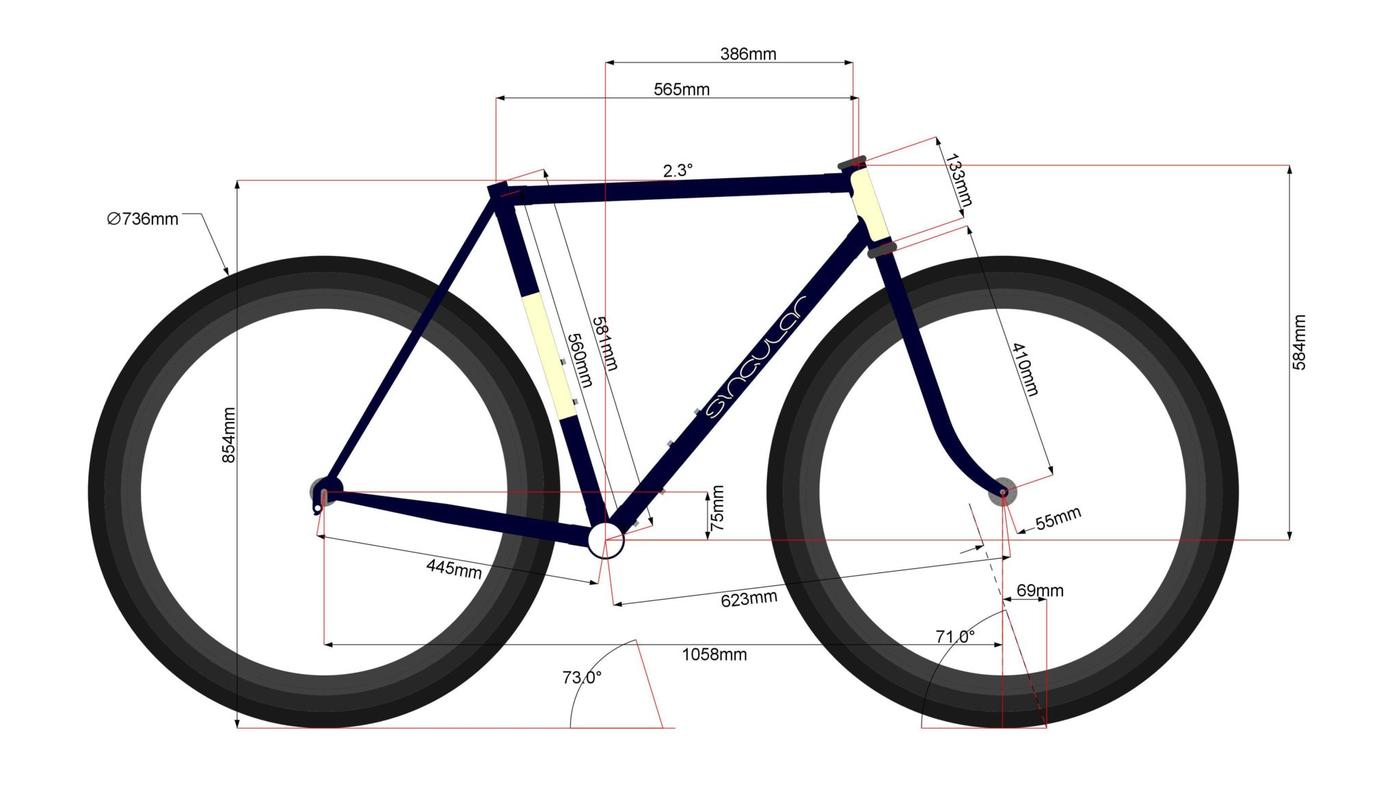 When Sam from Singular reached out to me to review a pre-production sample of his new Peregrine, he offered up a size Large, which I could make work but in an ideal world, I would ride the XL. The Peregrine is an interesting bird in the world of all-rounders. It has a very short head tube and thus, low stack numbers. These bikes are meant to be ridden with positive rise stems or stems with more stack built-in, like the Sim Works Anna Lee I used in this build spec. 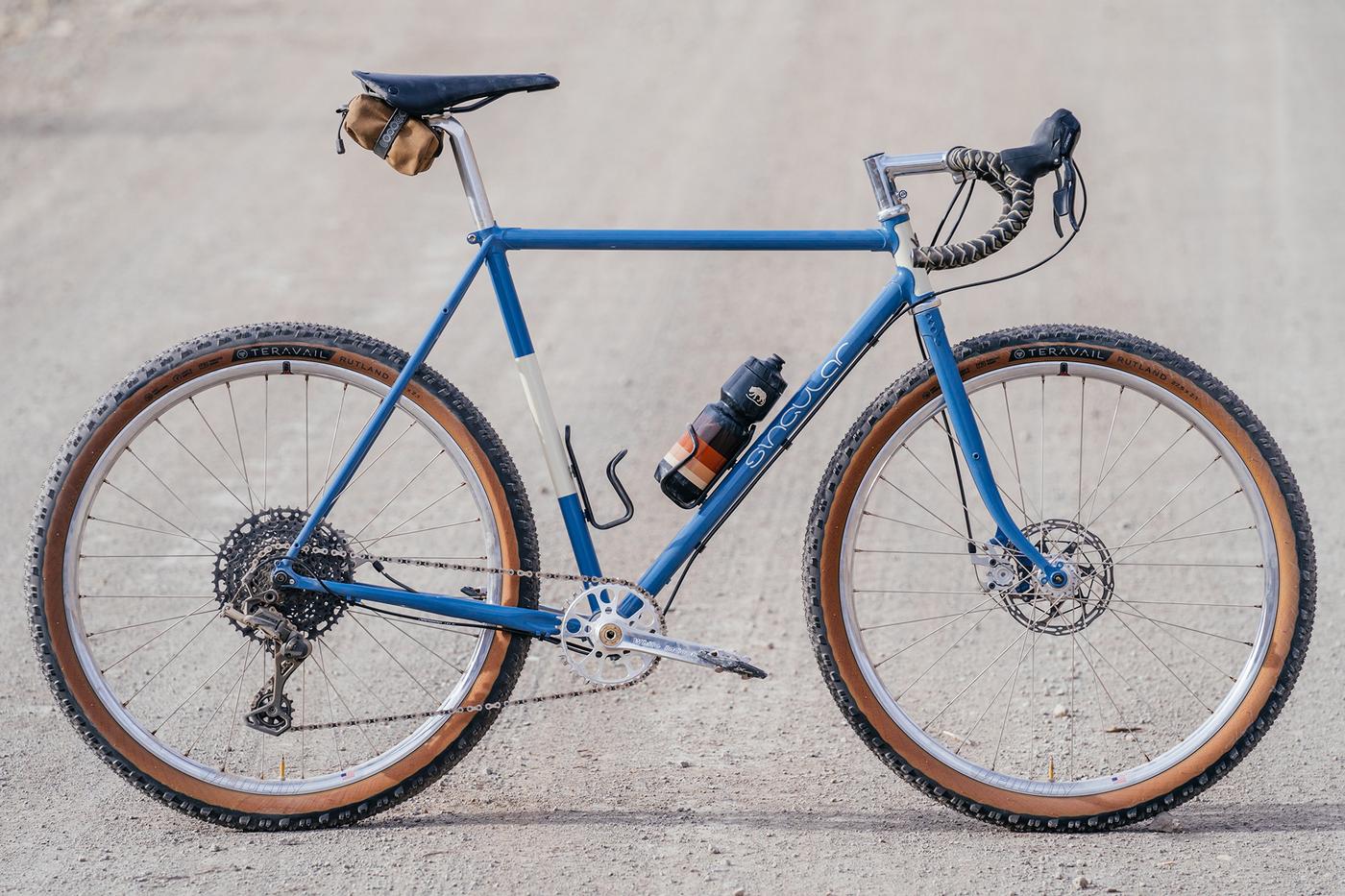 With a close-to-flat (2.3º) top tube, the Peregrine has the aesthetic of vintage randonneur and touring bikes with an updated, modern package.

With the 73º seat tube, 71º head tube, 75mm BB drop, and 69mm trail, the Peregrine is smack dab in the middle of a mixed-terrain tuned, mid-trail bike. In general, off-road bikes have high trail figures (≈ 95mm) whereas bikes designed for pavement have low (≈ 35mm) and mid-trail geometries like this, have around 69mm of trail. This enables the Peregrine to ride both on and off-road, unloaded and loaded, with ease. 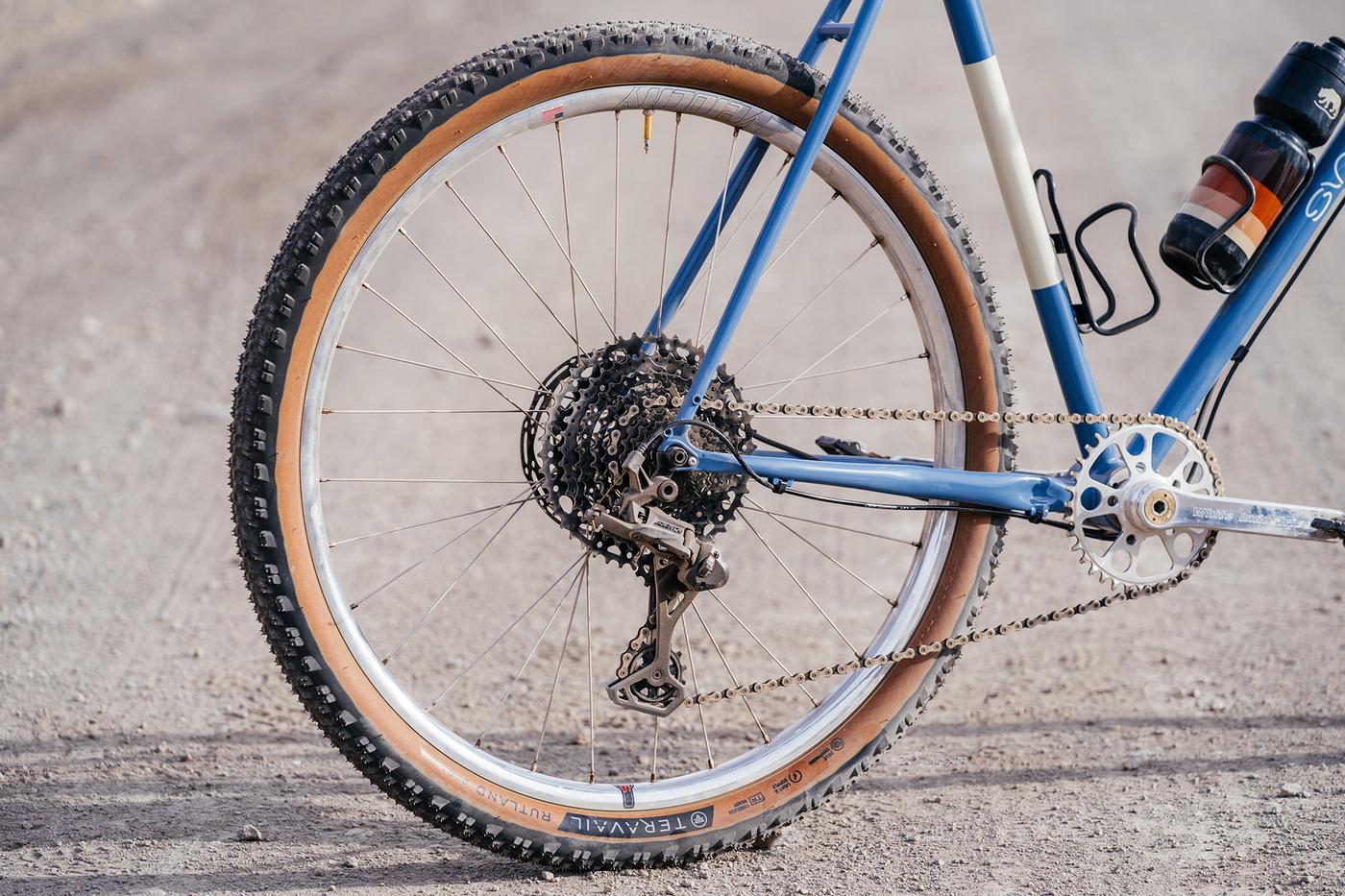 With chainstays measuring 445mm and a wheelbase of 1058mm, the Peregrine once again toes the line between “touring” and “all-rounder” use. Utilizing a rear rack and panniers won’t have to worrying about heel strikes and, for front-loading with racks and panniers, the bike will maneuver comfortably as a trail of 69mm aids in steering low weight quite well. 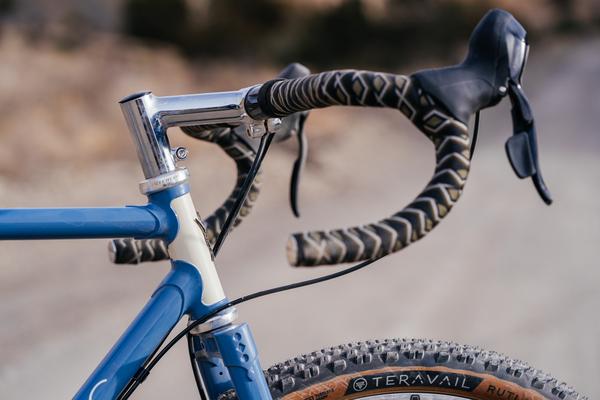 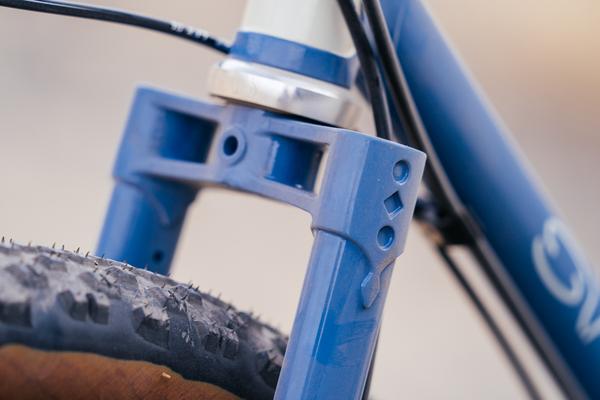 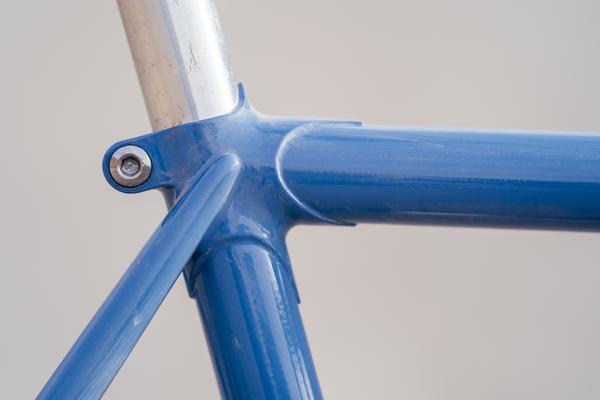 I love it when production bikes have thoughtful aspects akin to one-off, custom frames, and the Peregrine has plenty of details that set it apart from your run-of-the-mill TIG-welded, made in Taiwan bikes. Not that there’s anything wrong with straight-up TIG-welded bikes. Hell, almost all my bikes are TIG welded, but when it comes to emulating the look of mid-century constructeur frames, you can’t go wrong with lugs! The head tube is lugged; the seat tube cluster utilizes a fastback lug; the fork crown is lugged, which creates a nice boxed framing for the off-white paint; and even the dropouts have been designed and engineered in-house at Singular to complete the modern update to a vintage-inspired bike. 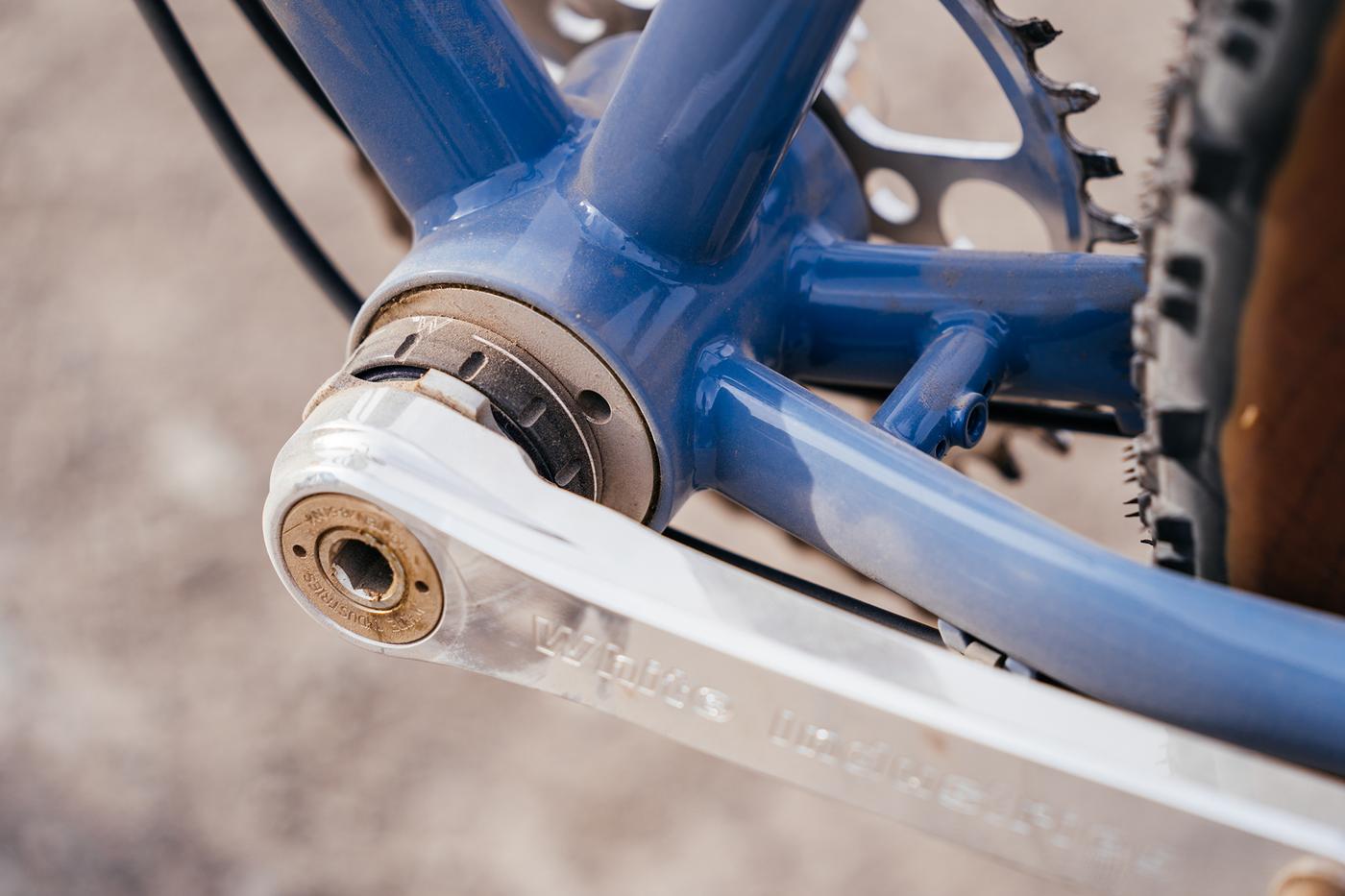 The eccentric bottom bracket shell is TIG-ed to the downtube, seat tube, and chainstays but the rest of this bike is lugged elegance. As for the eccentric shell itself, I didn’t have to adjust it once during my couple hundred miles of ride time. 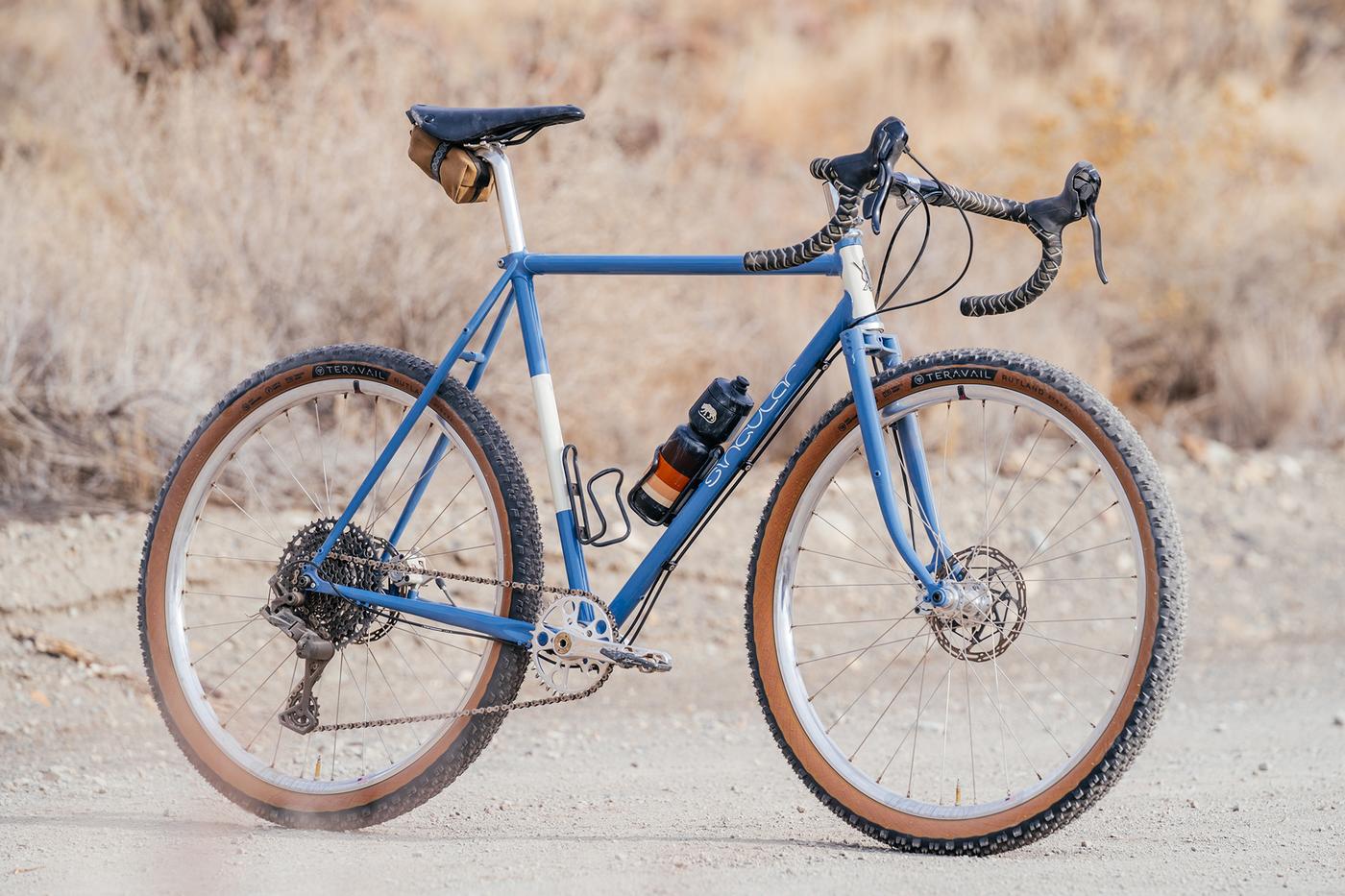 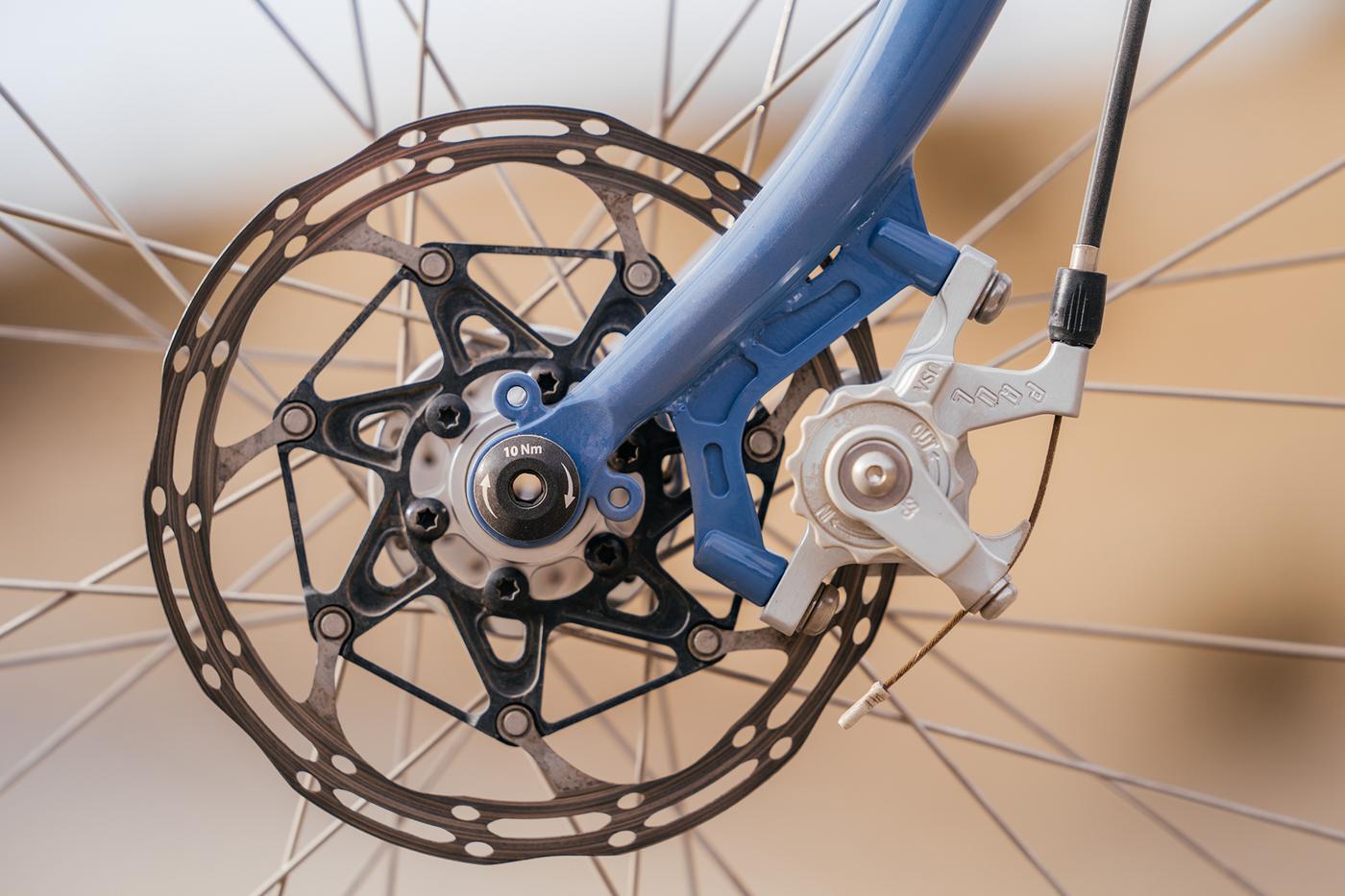 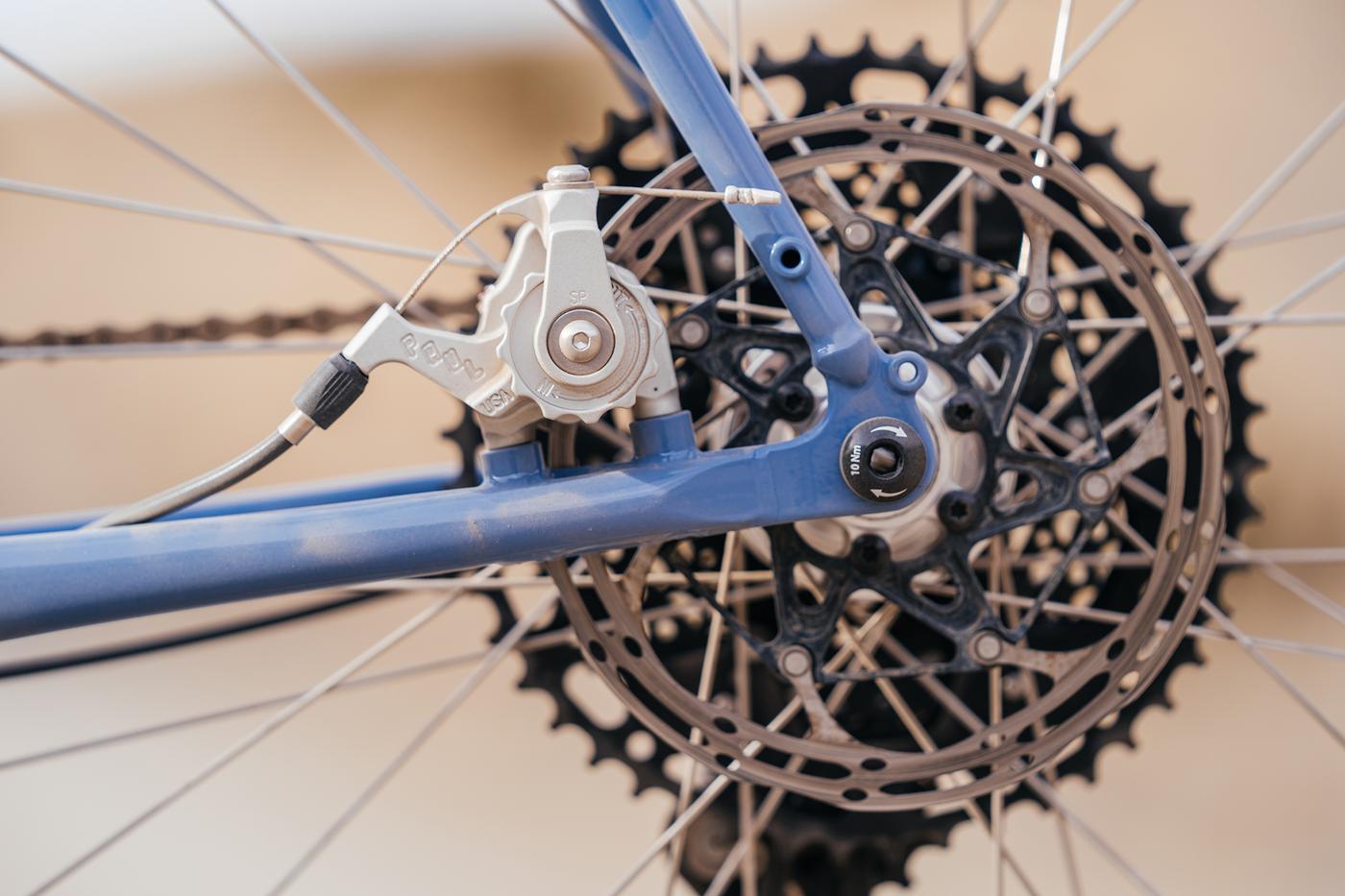 One small note on this particular bike that I’m sure the Peregrine-eyed readership already noted is it has a flat-mount rear and a post-mount front brake caliper. Production Peregrines have flat-mount brakes, front and rear. 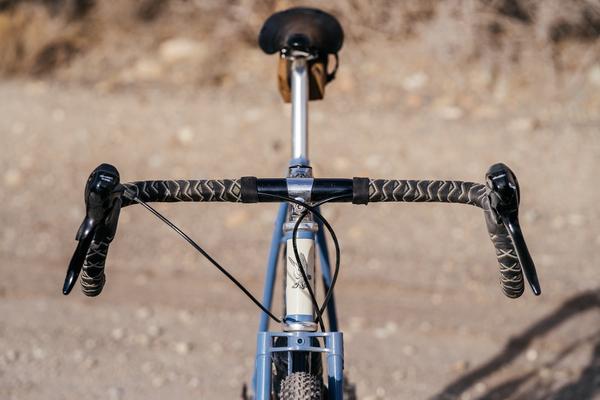 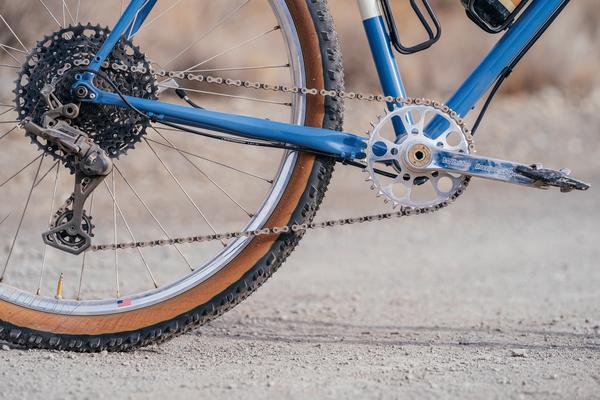 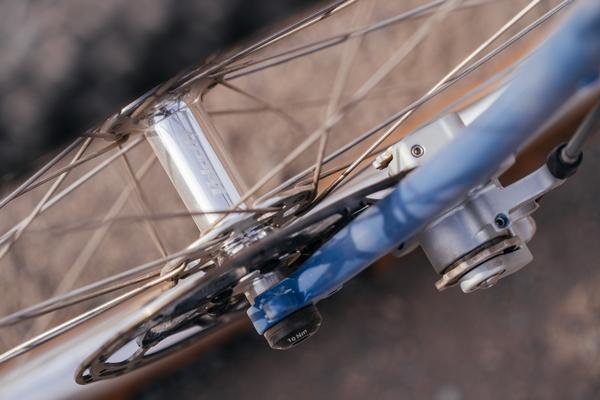 As with many bikes we’ve reviewed over the past two years, this Peregrine build is based on parts I had in my personal stash, along with a few components sent in by brands. Velocity graciously sent in the Blunt SS Pro wheels, Sim Works sent a Beatnik seatpost and an Anna Lee stem, PAUL sent the brake calipers, White Industries sent this M30 crankset out for me to update Cari’s Elephant a while back but I used it on this build instead. I had the Crust Shaka bars, bar tape, Brooks Saddle, Teravail tires in my own stash. By now, you’ve noticed the Microshift AdventX group, which I thoroughly enjoyed in this era of parts shortages. 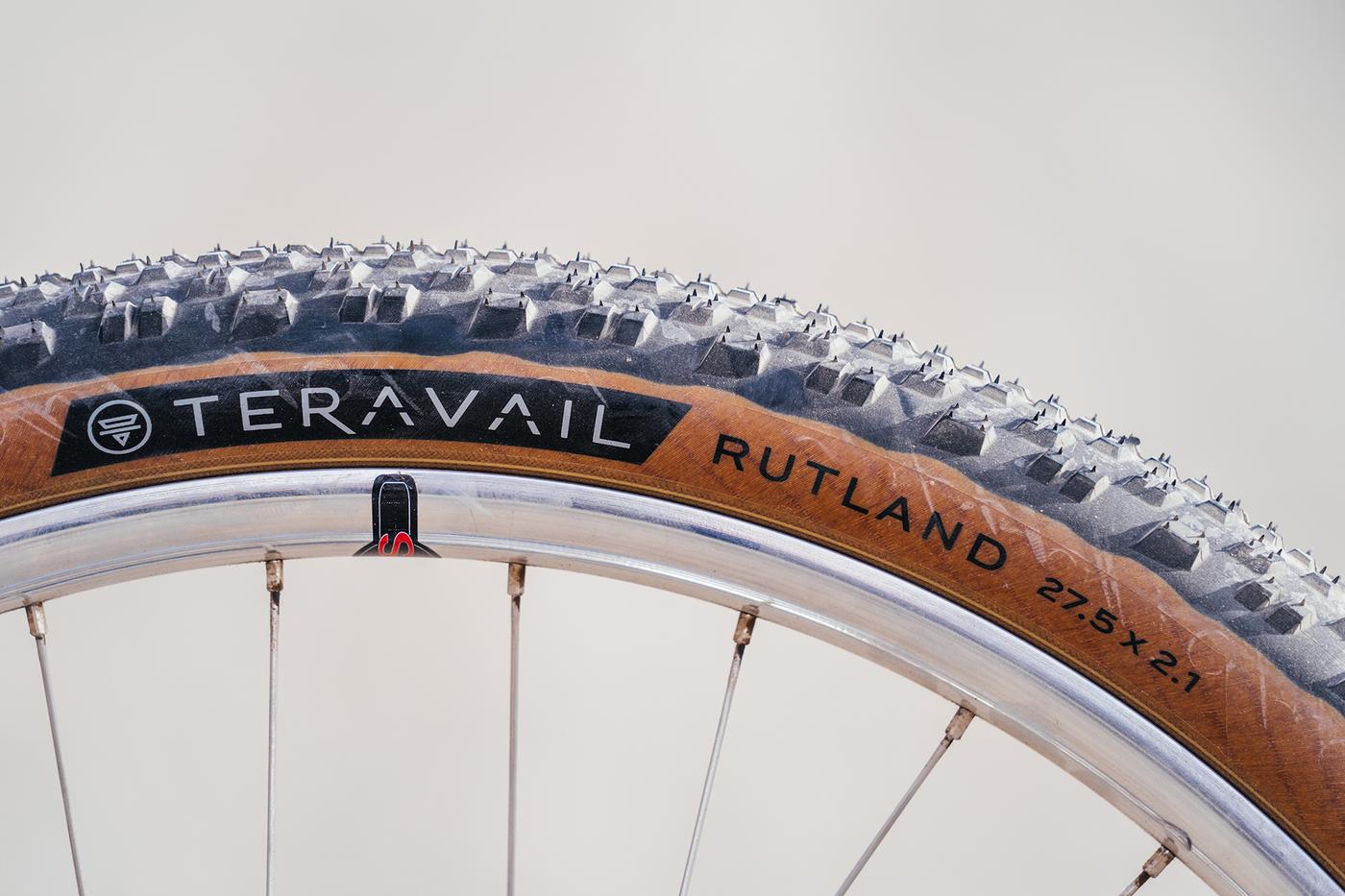 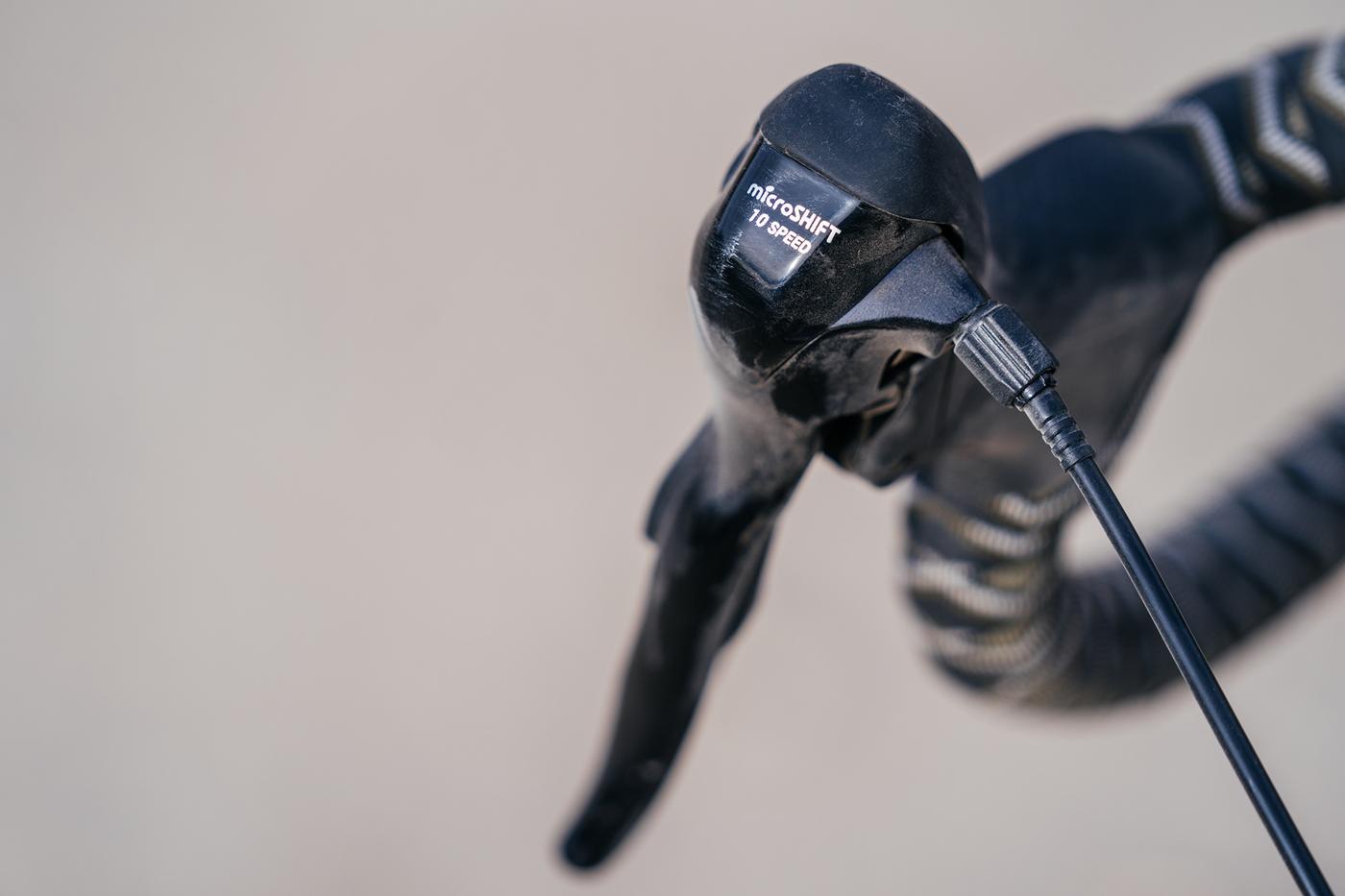 Yes, that is Microshift AdventX

A few months back, Microshift sent in its AdventX road groupset. All I had to do was find a bike to build up around this unique offering. When the Peregrine arrived, I knew exactly what to do with this 10-speed group. On the surface, AdventX’s rear mech looks like a throwback to older Shimano Deore and the shifters look kind of like a pair of older Claris 8 speed brifters. 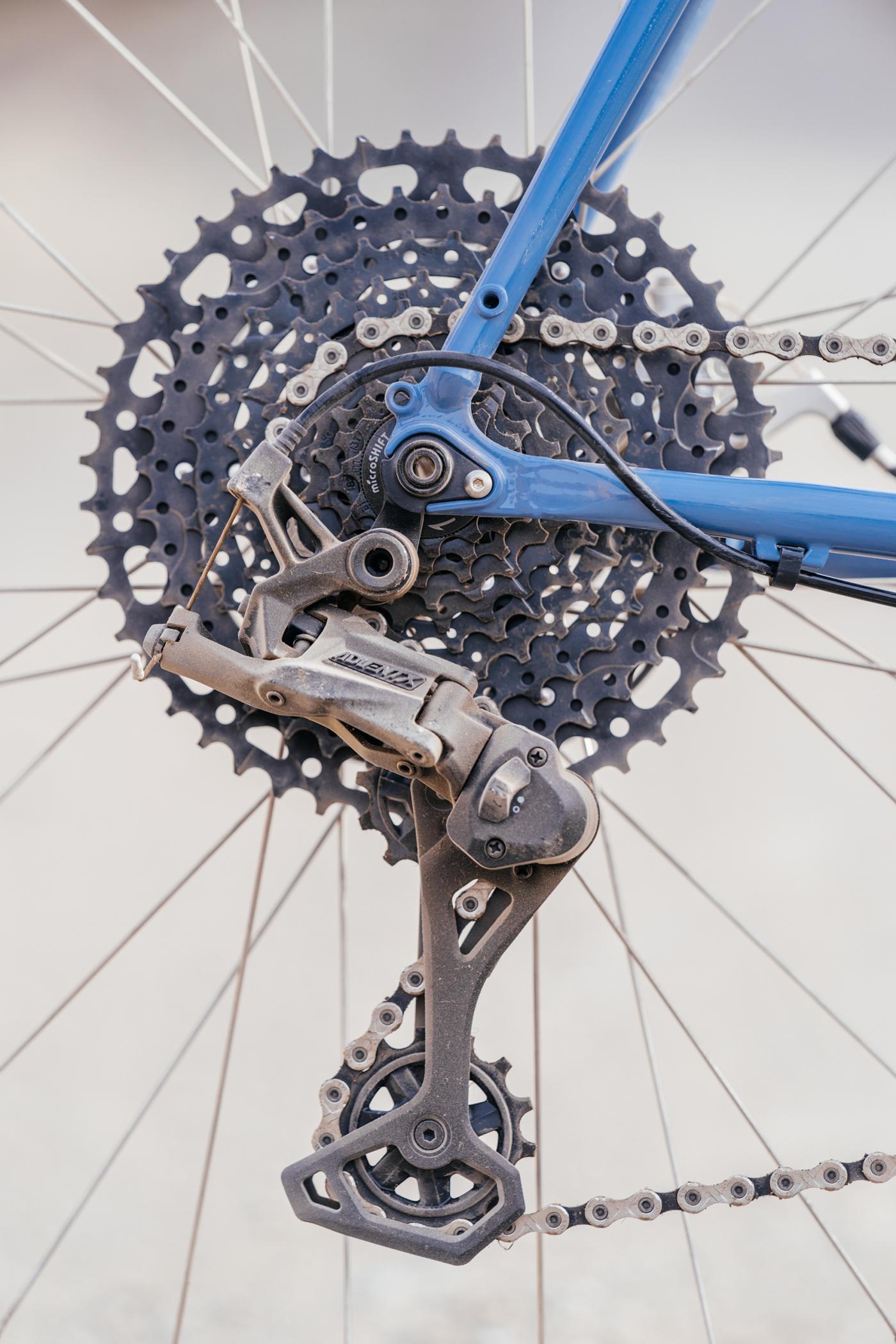 Why other big brands don’t do this is beyond me, in a frustratingly annoying way as you’re either forced into buying the expensive AXS/Di2 setup or hacking your kit apart by using the Ratio conversion kit.

Before I talk about how this group feels, I need to emphasize that I view a lot of modern shifting as the direct by-product of racing. People demand crisp, fast shifting these days, for all applications and I’d like to pause that thought. For a gravel bike or touring bike, I’d argue the demand for fast, responsive shifting should be put aside. It’s why I enjoy my downtube shifters on my Merckx and why I’ve long enjoyed barcons on touring bikes. That said, AdventX offers precise shifting, at maybe a slight delay when compared to modern groups. The throws are a bit longer, the shifting is a bit slower, but it does what it’s supposed to with little to no chatter and in a package that is both affordable and relatively lightweight. For a comparison you might be familiar with, AdventX reminds me of vintage 8-speed Campy Record shifting. Even the brifters have a unique shifting mechanism with two levers outboard of the right shifter, which allow for shifting up and down the 10-speed, 11-48 cassette.

Overall, I was very pleased and genuinely surprised at how well AdventX works on a bike like this. I don’t race, I’m not in my prime physical shape and, these days, I want to cherish every moment I’m out on the bike. For that casual style of riding, I can’t name a better option in terms of pricepoint, weight, and availability. Well, mayyyybe some vintage 8-speed kits might do the trick but that’s a tale for another day. 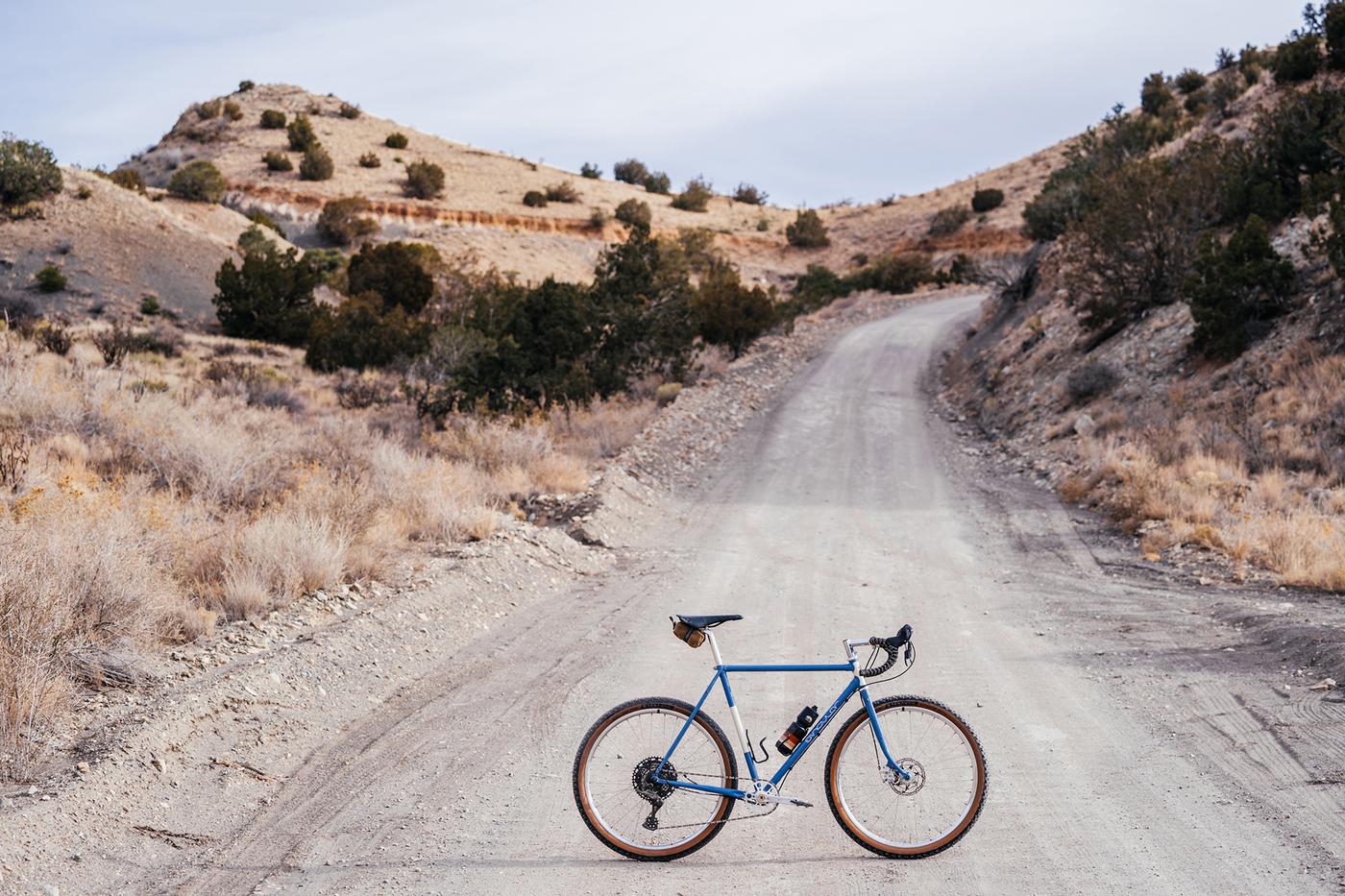 For our local chunky doubletrack, sandy dirt roads, and even XC singletrack, the Peregrine was a joy to ride. The steel fork absorbed annoying washboard roads, ruts, and rocks without any brake chatter when descending steep dirt tracks. As for the frame itself, it’s a little more robust than a Columbus SL or SLX tubeset but still offered a bit of flex when I needed it the most. This middle-ground stiffness was a pleasant surprise for a non-oversized tubing spec. While the complete build as shown with saddle bag, cages, and pedals weighs in at 27lbs on the nose, it could be lightened up considerably with carbon bits here and there. Still, as a 190lb, 6’2″ human, this 27lb bike rides like a rocketship or – perhaps I should say – stoops like a peregrine. 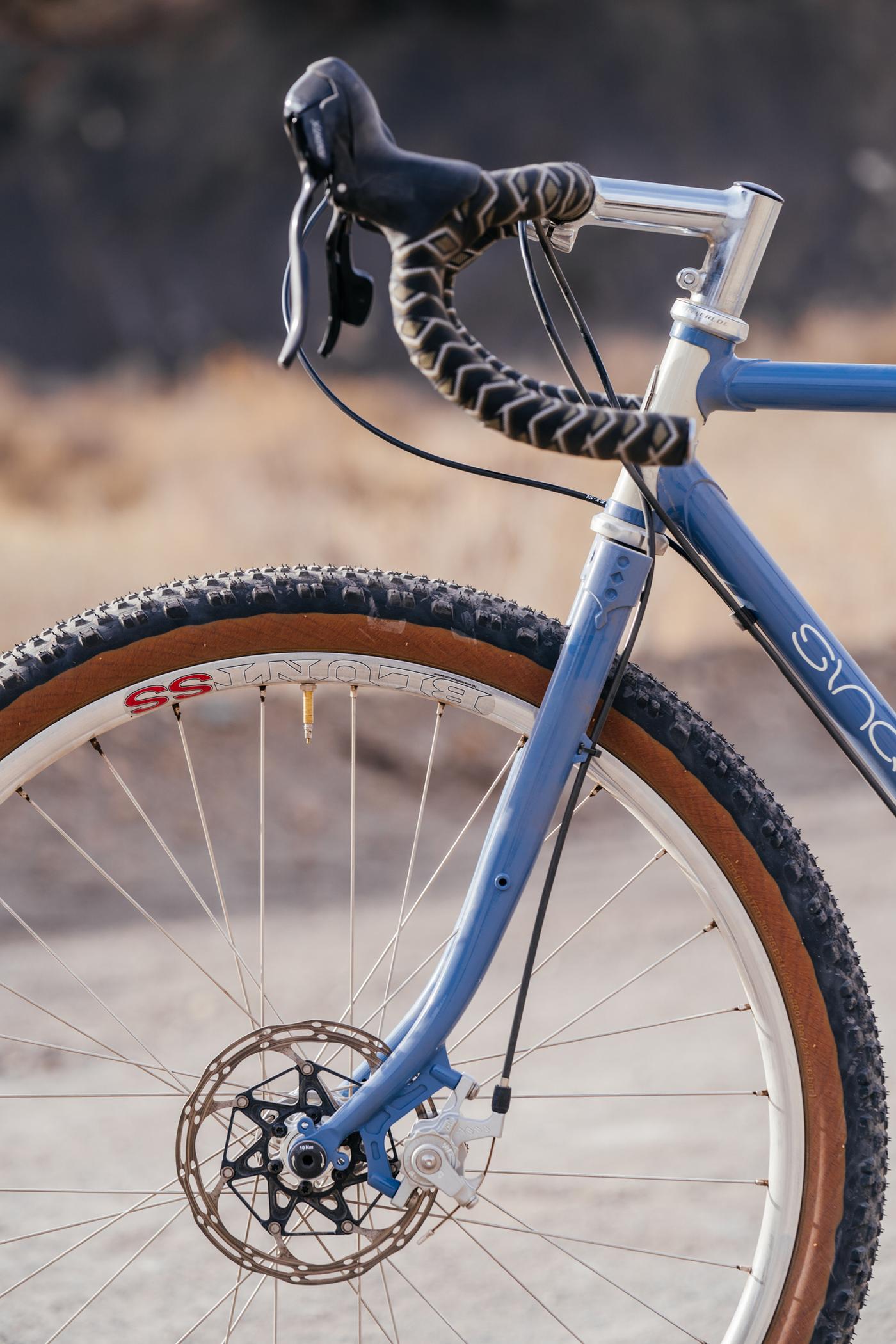 It’s hard for me to compare this bike to others. On the surface, it looks like a disc brake Rivendell built like an All-City Gorilla Monsoon. Yet, it is much lighter than a stock GM build. If I were to compare it to anything, it’d be a slightly stiffer Elephant NFE, which is probably still to this day one of my all-time favorite mid-trail all-rounder bikes. What I really love about the Peregrine is the stance of the bike, the fork, having an eccentric BB in case you want to ride it as a singlespeed, and the geometry, making it a perfectly ideal all-rounder. 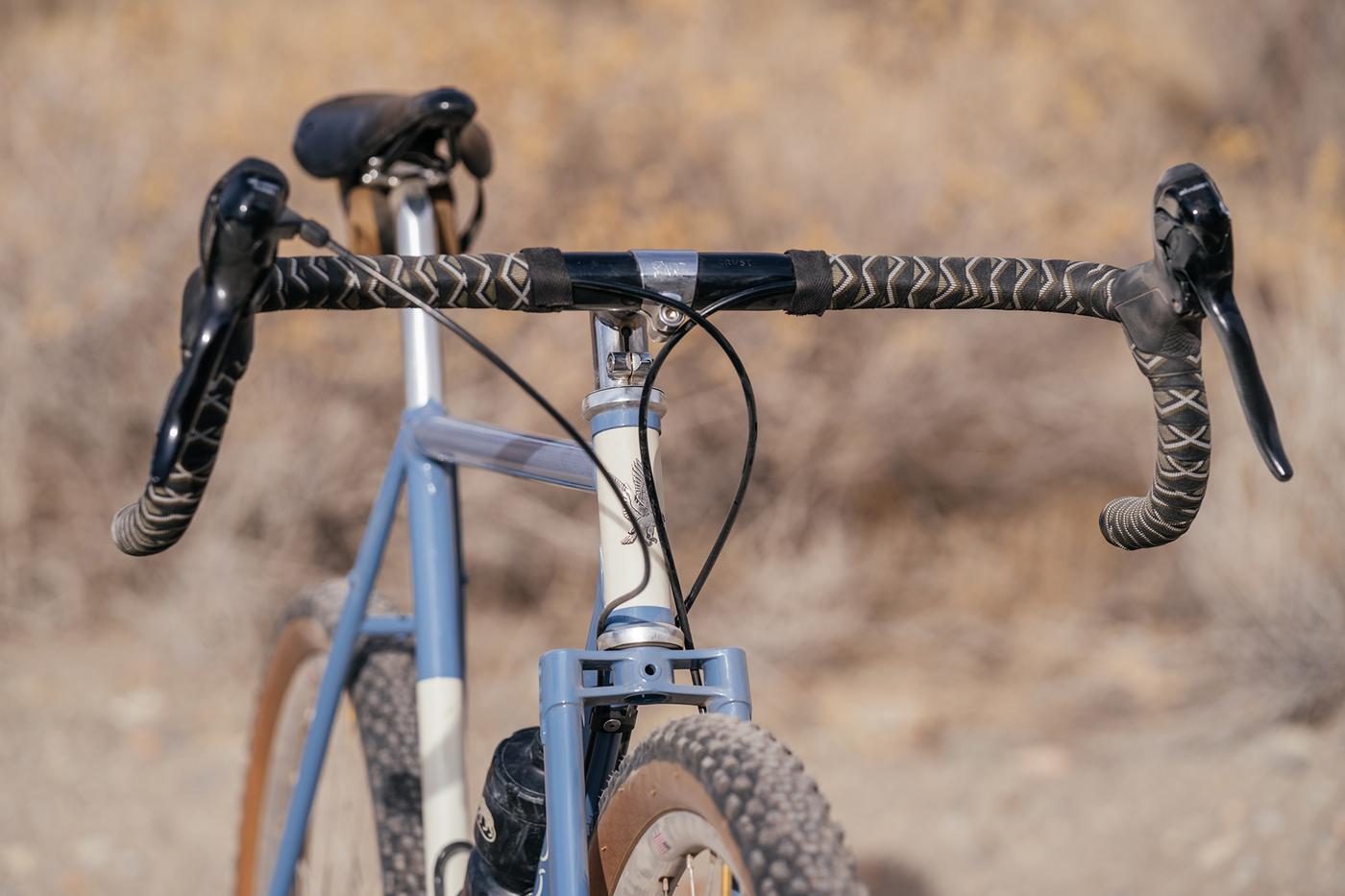 My only critique of the Peregrine is the short head tube. Again, I’m a long and lanky bastard and, my long legs coupled with my long arms, make me want a tall headtube for a bike like this. I get the sizing concept utilizing a high rise stem and, for sure, the shorter headtube will ultimately make the bike stiffer when compared to one of twice its length, but my back wasn’t happy after longer rides with such a drastic saddle to bar drop. I should also emphasize that I should be on a size X-Large, not a Large as pictured here. I made it work but, still, I’m not sure an extra 20mm of stack would fix the “comfort fit” problem. The steerer tube on this sample fork only allowed for the stem, no spacers. 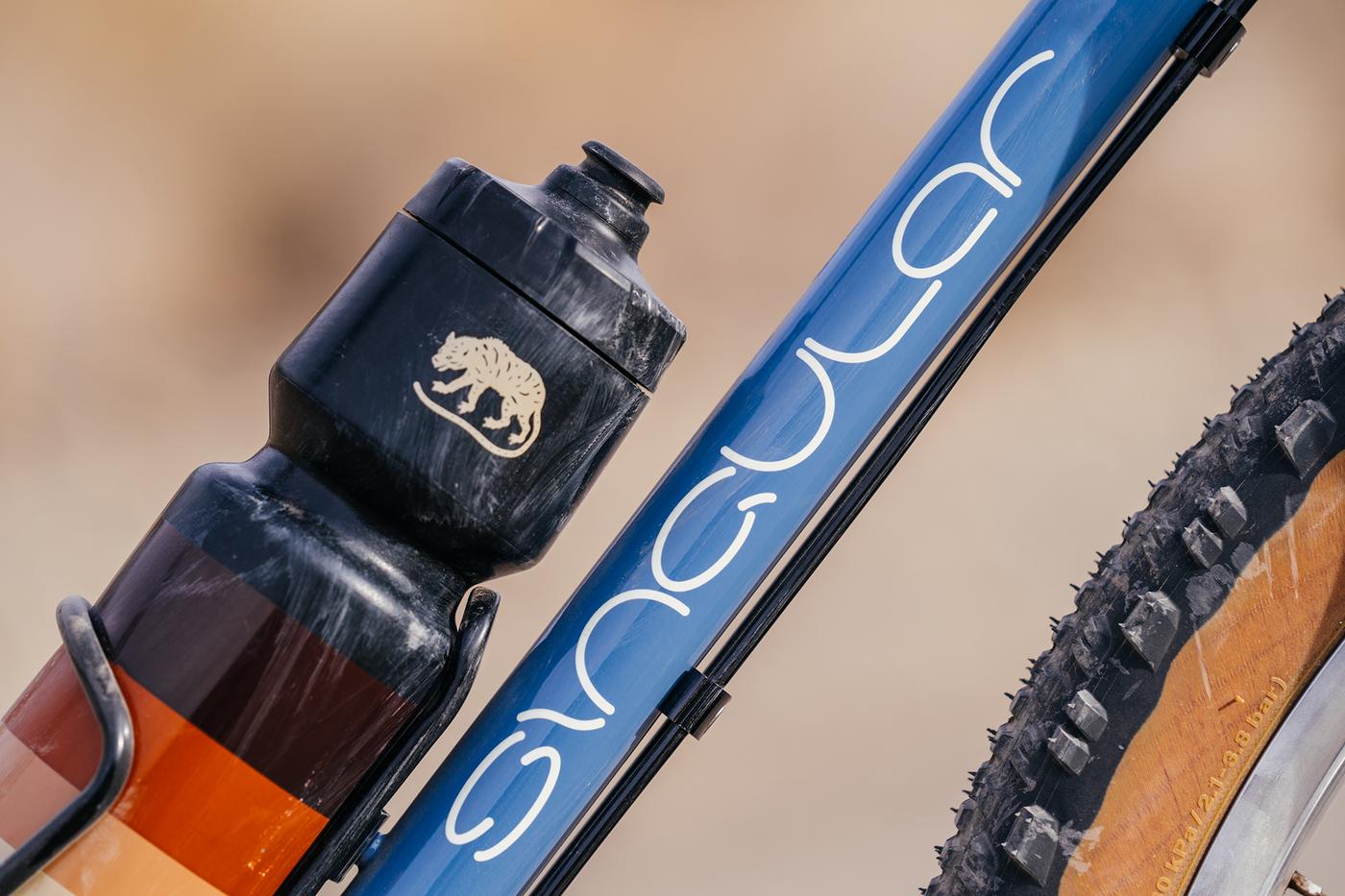 Look, there are so many bikes in this space and yes, it can feel a bit crowded. But, to think that a bike developed in 2007 can still hold its own in the modern market with so many similar frames available is pretty outstanding. It really adds to the old saying “if it ain’t broke, don’t fix it.”

The Singular Cycles Peregrine is an exceptional all-rounder that lives up to its reputation and while the stack is a bit lower than I’d like it to be, that’s almost always the problem with my body proportions on stock sizing bikes. Overall, the tubing selection, frame detailing, steel fork, and parts kit created a dreamy ride experience and it’s one I’d like to share with one lucky winner… 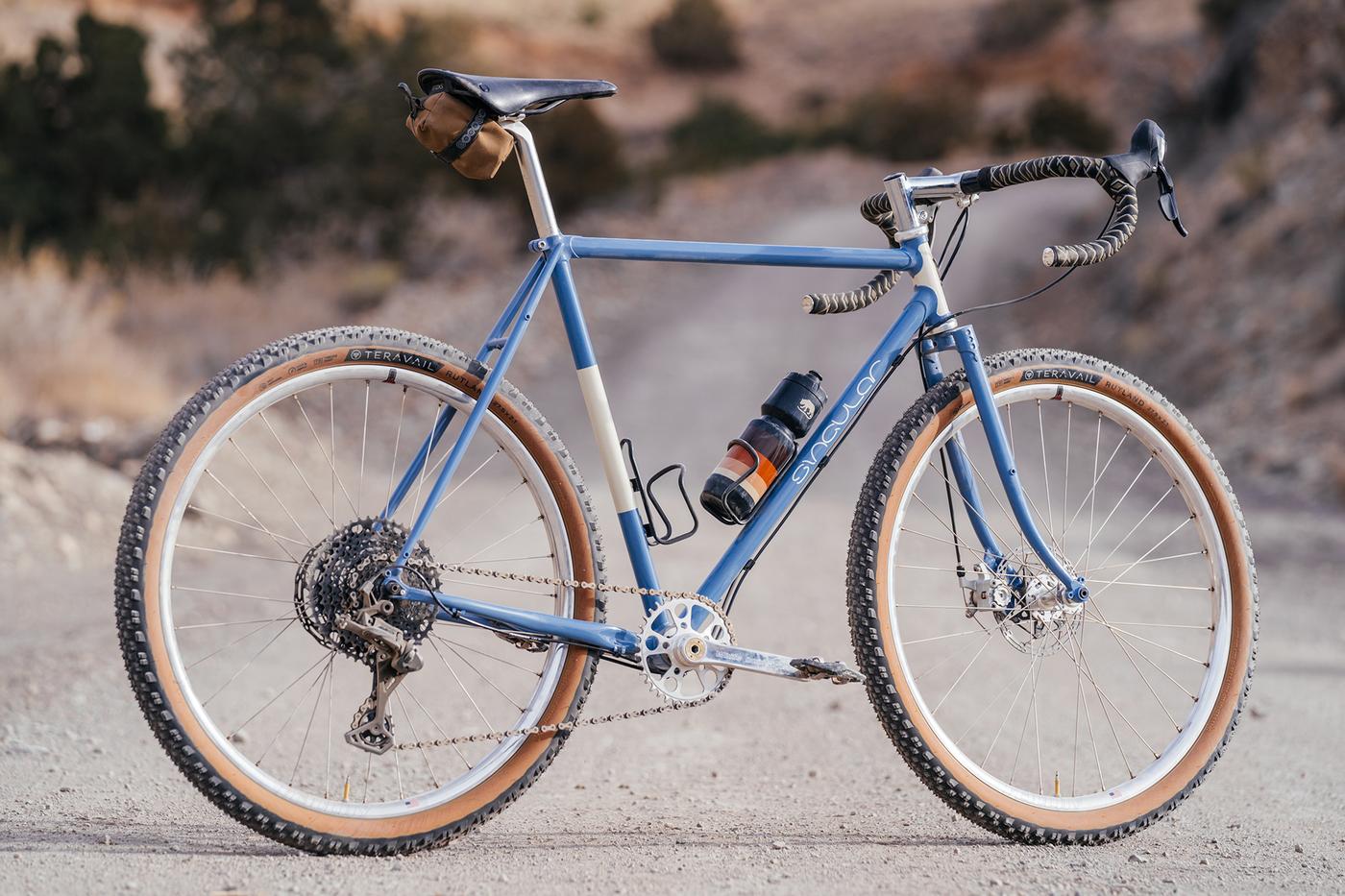 How You Can Win This Bike

Next week, we’ll be launching our email list, where we’ll send out weekly summaries of our content, special discount codes for The Pro’s Closet, and other meaty tidbits. Keep an eye on The Radavist where we’ll announce the giveaway of this very bike, which is already boxed up and ready to ship to you. For this particular giveaway, it’ll be the United States only. Don’t fret, we have much more for our global audience! We’ll randomly select one email from the bunch and announce the winner!

Thanks for your time this morning! I’d like to personally thank Velocity, Sim Works, PAUL, White Industries, Microshift, and Singular for helping me pull together this review. Thanks to Sincere Cycles for the build-up! I’ve wanted to throw my legs around a Peregrine for some time now and hopefully, you’ll be able to as well! Singular Cycles is opening up pre-orders for framesets (£1,000.00) with a September delivery soon, so keep your eyes on their website! But they do have some stock for sale right now, so jump on it!