Let’s rewind a bit, back to the Steamboat Ramble Ride, where I rode this very frame, fully loaded from Steamboat Springs to Fort Collins along with a whole crew of people from all over the country. The whole time I was on the ride, I kept thinking about how much I love drop bar 29ers for tours like that. It’s the best of both worlds – drops for different riding positions and MTB gearing for slogging a loaded bike up mountain passes. In the back of my mind, I began playing out how I could use a bike like this for some of my more ambitious rides in the Death Valley or Inyo Mountains area. Then SRAM contacted me about working on a project with their new AXS components. Initially, their thoughts were to build a custom bike around the interchangeability of the eTap AXS road with the new Eagle AXS system and do a project with this new bike. The subject matter was entirely up to me. Meanwhile, my mind was still on the Moots Baxter and how it would be perfect for this loop I had scouted a year or so ago… 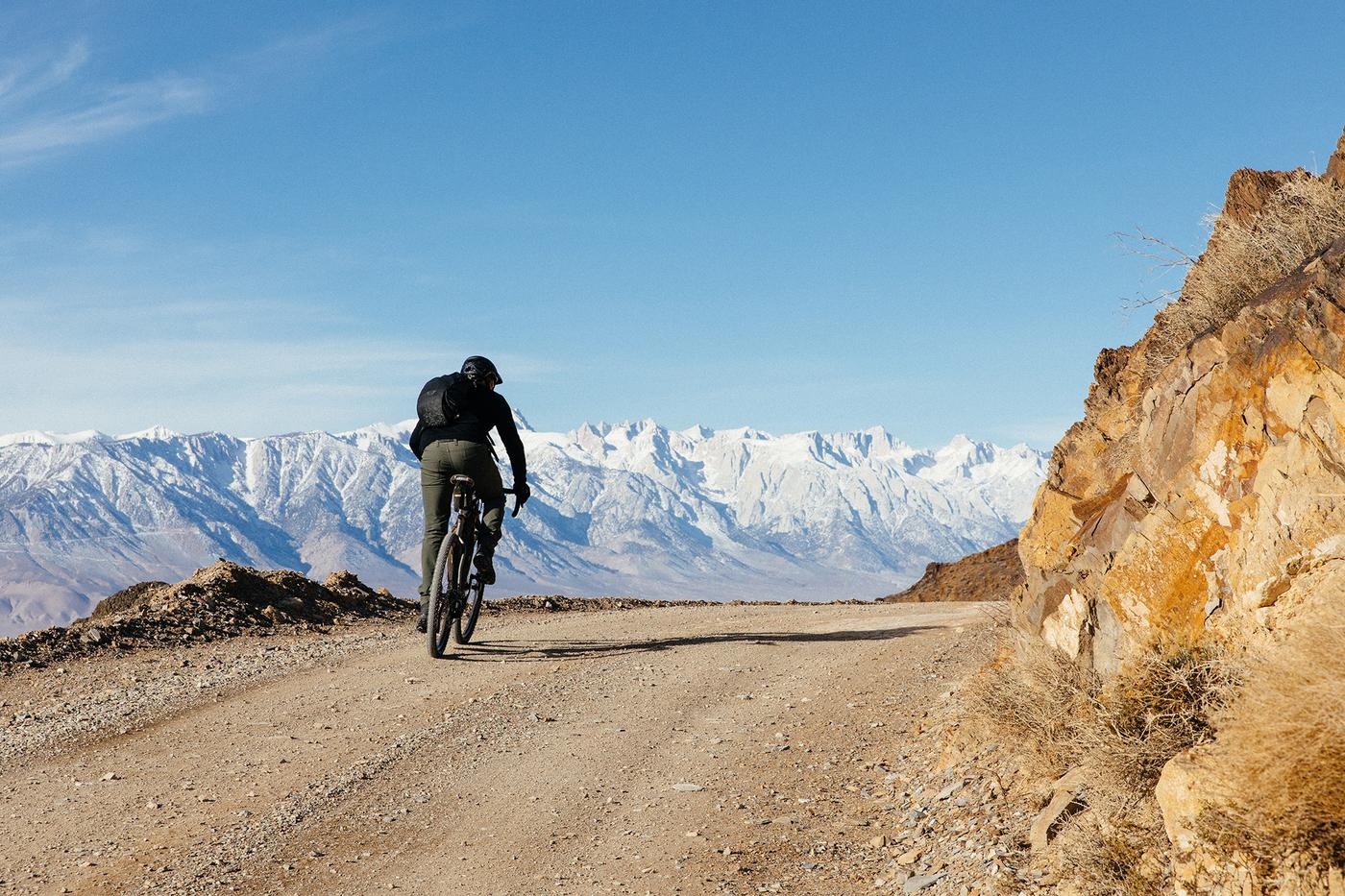 Yesterday we looked at a ride in the Inyo Mountains and Death Valley National Park. It has it all: a steep climb up, barely a “road” going down – in reality, it’s more like singletrack, a long false flat climb, ripping gravel roads and a long paved road descent back to home base. The terrain called for a mountain bike but the roads beckoned for drop bars. It’s the perfect ride for a bike that utilizes the new wireless components from SRAM, dubbed AXS. An Eagle cassette and Eagle AXS rear derailler offering 10-50t range with eTap AXS road shifters, allowing you to link it all together, and then for added measure, you can even link a RockShox Reverb AXS wireless dropper post to it all! It’s like a trifecta of practicality. In a nutshell, AXS opens up interconnectivity between SRAM’s all-new wireless shifters and derailleurs. You can connect a road shifter to a mountain derailleur, or vice versa if you’re into weird stuff like that. Then, if you really want to up the ante, you can connect a dropper post to actuate from your road shifters. All this wizardry is handled by a battery pack. There are no cables, no wires, it’s all SRAM’s proprietary wireless networking. Simply attach your derailleur, set your limit screws and viola. The battery’s life runs about 20 hours, depending on your shifting habits, so on a ride like this, I packed an extra. If you’re in a pinch, you can always grab the battery from the dropper and plug it into the rear derailleur. While this might seem like a hassle, I got in the habit of pulling the battery after a ride and charging it, along with my cycling computer. The AXS group really made this bike an even more capable vehicle for a ride like this. On rides like this, where you have to prepare for temperature fluctuations, or inclement weather, as well as pack enough food and water for a good 8-10 hours on a bike, my question is, why wouldn’t you use a frame bag? My backpack already has camera equipment in it, which is already a lot of weight to carry, so it’s nice getting everything else off my back and down low on the bike. There are no racks to rattle loose and if it rains, everything will be dry inside. What good is a down jacket if it’s soaking wet when you go to put it on? I use this very Porcelain Rocket frame bag a lot for rides like this but I do have to be mindful of what I pack. Just because you have space doesn’t mean you should fill it all, so I ask myself a simple question when I’m about to put something into a framebag. “Does this balaclava bring me joy? Hell yes it does when the wind picks up and the temperatures drop!” Pack smart, pack light and leave room for snacks. Oh, and I put two photos up of the bike without the bag for you minimalists. ;-)

In terms of necessities for this ride, in particular, the keyword is preparation. Make sure you’re prepared for weather with warm clothes, for mechanicals, and that includes extra warm weather once you’re in Death Valley. Water is non-existent on the route, so carry all you need. Bring some kind of tire plug because the rocks are sharp. I always carry a Garmin InReach or similar device in case of emergency. Also, bring a friend, or two! Or three! The ride is not crazy hard, it’s just very remote so be safe and roll in prepared. What is This Wizardry?

SRAM made some magic happen with AXS. It’s what I’ve been wanting for a long time. Having drops, with road shifters, and the gear range of Eagle for a build like this ticks all the boxes for me. Yet, leading up to this project, the technology made me nervous. If my camera batteries and phone die unexpectedly due to the cold at higher elevations in the desert, what would happen if the bike’s batteries died? Are batteries really the answer?

Yet, after using the AXS system, I kinda let go of my ego for what it could be and really embraced the technology. The shifting is crisp, clean, and activates instantaneously, without hesitation. I let go of my preconceived notions of what should or shouldn’t be on a bike and really enjoyed the experience of riding something new and different. I’ve been riding the Baxter on my local LA rides and found the battery life to last about a week’s worth of riding. SRAM’s numbers say 20-25 hours per charge.

You can always carry spare batteries, or swap out the Reverb AXS’ battery, and even charge up with a USB battery pack. That said, I’d still be nervous taking an AXS-equipped bike on a long distance tour but as with all new technology, I’m sure that will change with use. What I will say is I’m not normally someone to geek out on tech like this but it has been a real treat to ride this bike with the AXS system. This project was created with support from SRAM. Thanks to James Adamson of Drop Media for the video work and Brent Underwood from Cerro Gordo for the help!

In terms of availability, AXS is available now, so head to your local dealer. Pricing is also available at SRAM for XX1 Eagle AXS, X01 Eagle AXS, RED ETAP AXS, and Reverb AXS.