One of the hardest things about reporting on frame builders and their shops is doing their operations justice. I’m still buzzing from my trip to Colorado to hang out with the crew at Moots and ride the Steamboat Ramble Ride. Spending a few solid days literally living amidst the operations, riding with the fabricators, talking and photographing everyone behind the scenes brought such great joy that I’m literally gushing as I write this intro. The 23 people that make this company tick are all great people who truly love their job and love cycling, at many capacities. Capturing that in photos and then writing about it is not easy!

Moots began in 1981, from the shop of Kent Eriksen, called Sore Saddle Cyclery, which technically opened in 1980, but the operations of Moots didn’t get rolling for a whole year. Kent began the brand with the help of many others, and eventually sold it off to begin his own company, Eriksen Cycles. Meanwhile, Moots began to permutate into their current state as one of the largest framebuilding operations in the USA. I can’t compare their shop to anyone else, other than Seven in the Boston-area. In terms of scale and organization. Packed within an industrial complex, the freestanding structure includes a machine shop, cnc lab, finishing studio, welding shop, offices, and three apartment buildings, one of which was my home for the week. You get the feeling that the building itself is a hive and the honey are these amazing titanium frames, beckoning for their first ride. 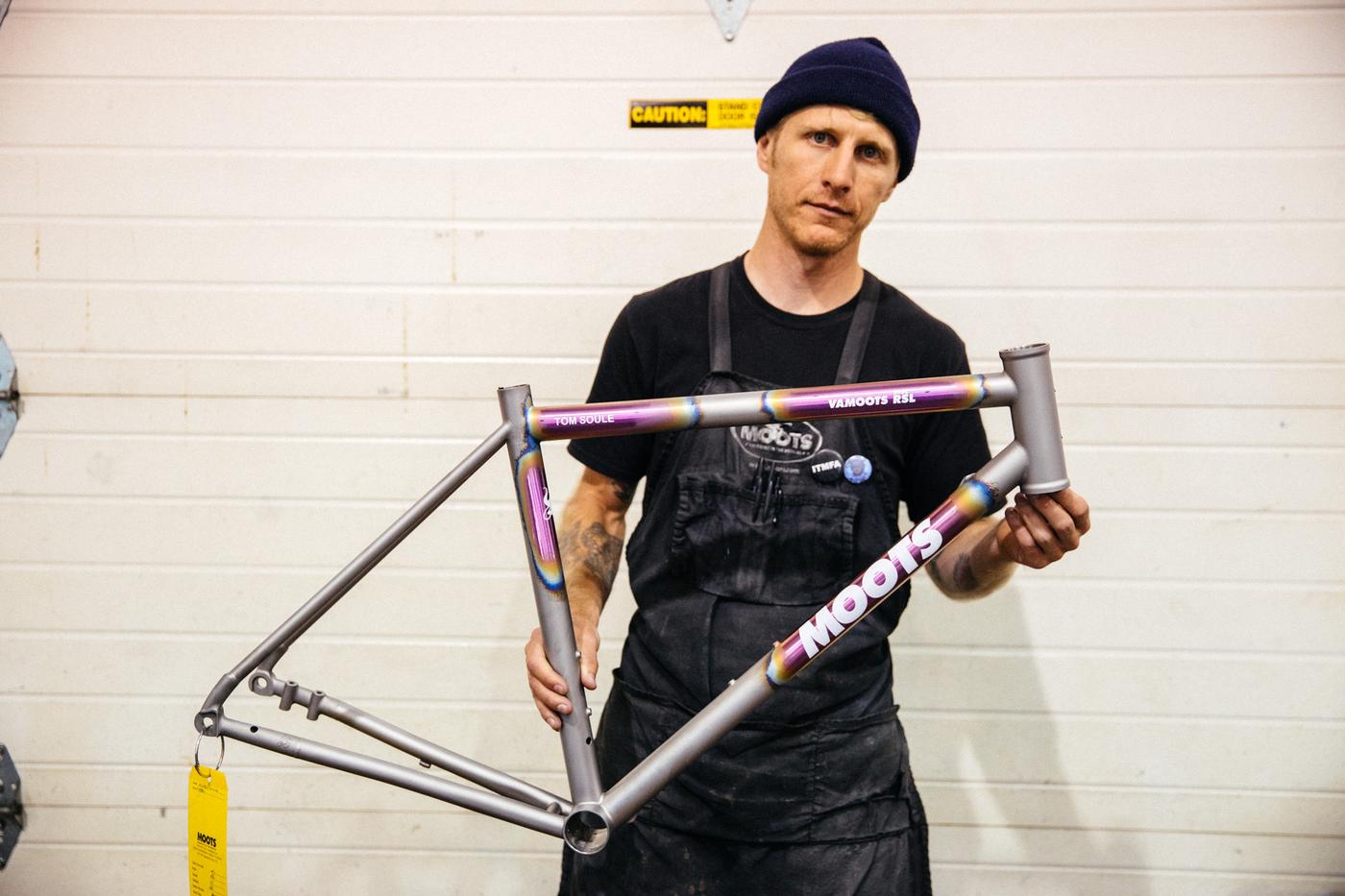 Over the years, the company has been bought and sold, with the owners mostly being hands-off, allowing the company to run itself, yet many owners wanted Moots to maintain its course as being simple, yet precision frames, void of ostentation. It wasn’t until the current owner that he asked the team “what would you like to do more of with these frames?” to which everyone replied “COLOR!” 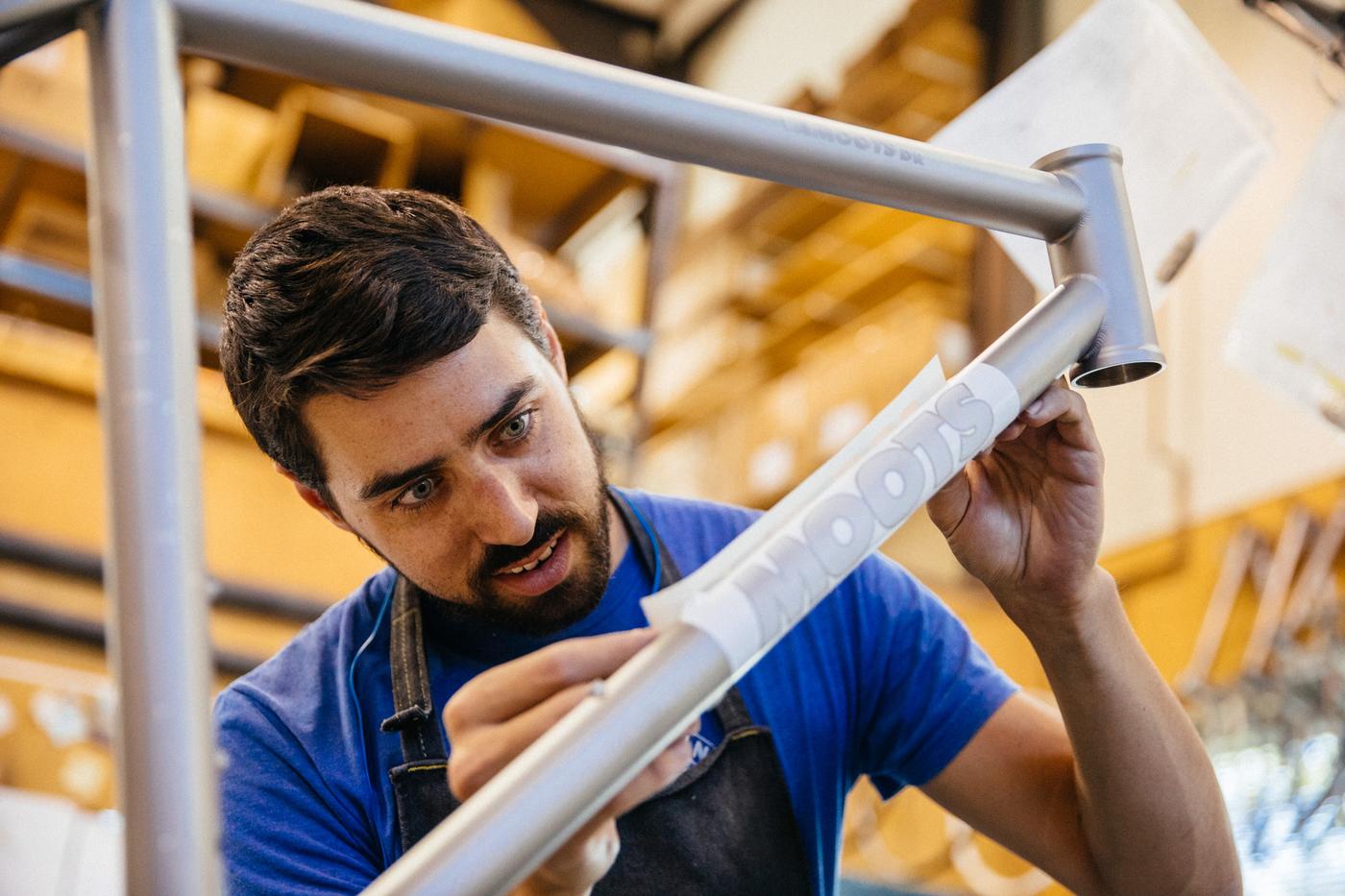 Now, don’t expect Moots to be painted in-house anytime soon, but the guys were chomping at the bit to do colored anodizing and more elaborate finishes. Nothing against Moots’ previous graphics, but they were very safe. Now, with finishes like the Kubrick, a Shining-inspired graphic, and Aspen-tree graphics, Moots frames are getting little hits of design and creativity applied after the welding is done. We’ll look at some of these in detail later on… 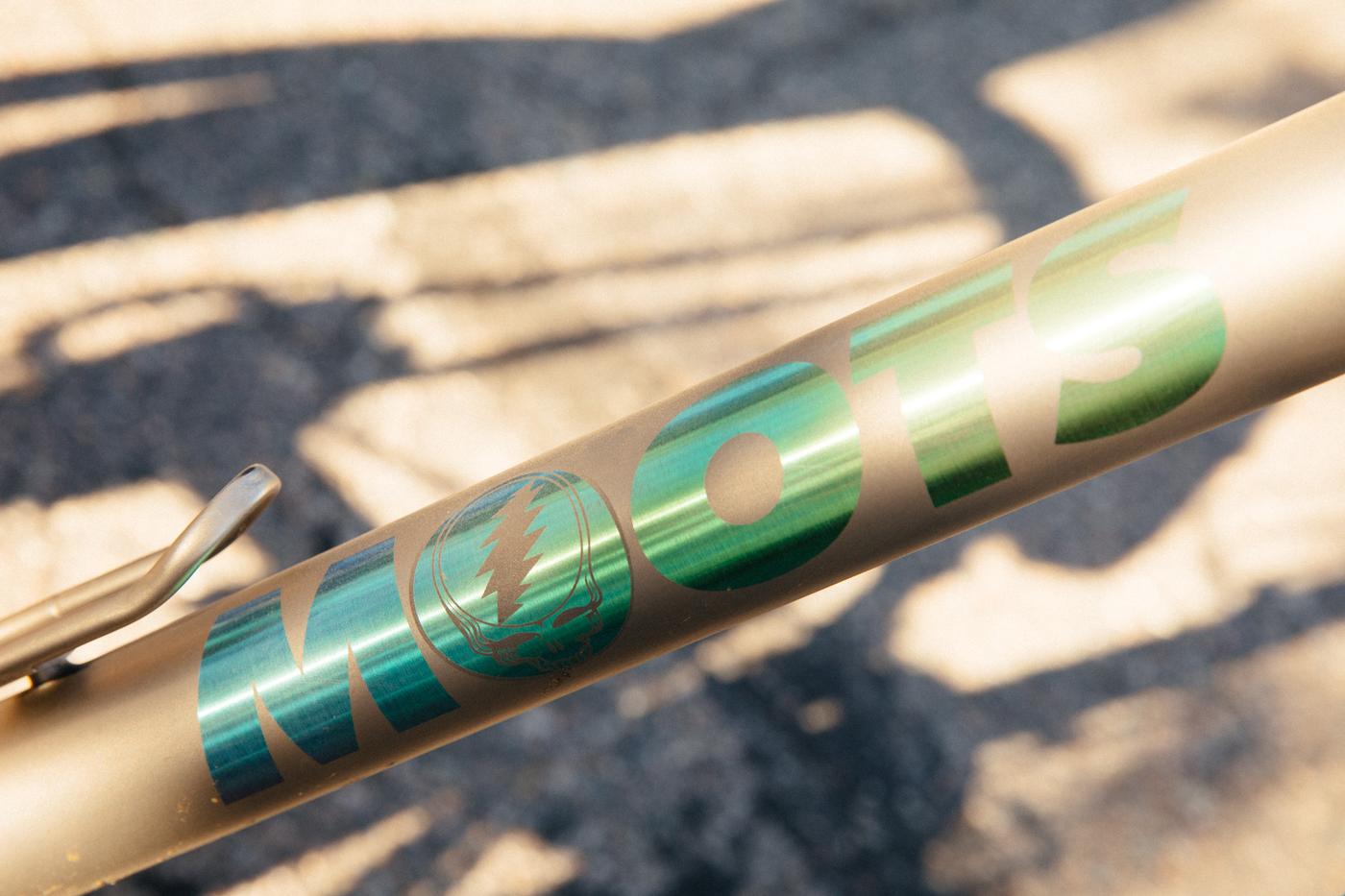 The most impressive thing about Moots is their ability to complement their competitors. Talk to anyone working in the finishing department and they’ll tell you they look up to Firefly’s impeccable work. This acknowledgment of inspiration from a competitor is a breath of fresh air compared to the typical competitiveness of the cycling industry’s attempts at individuality. At times, it feels like we’re all a flock of seagulls fighting over a bag of chips at the beach… 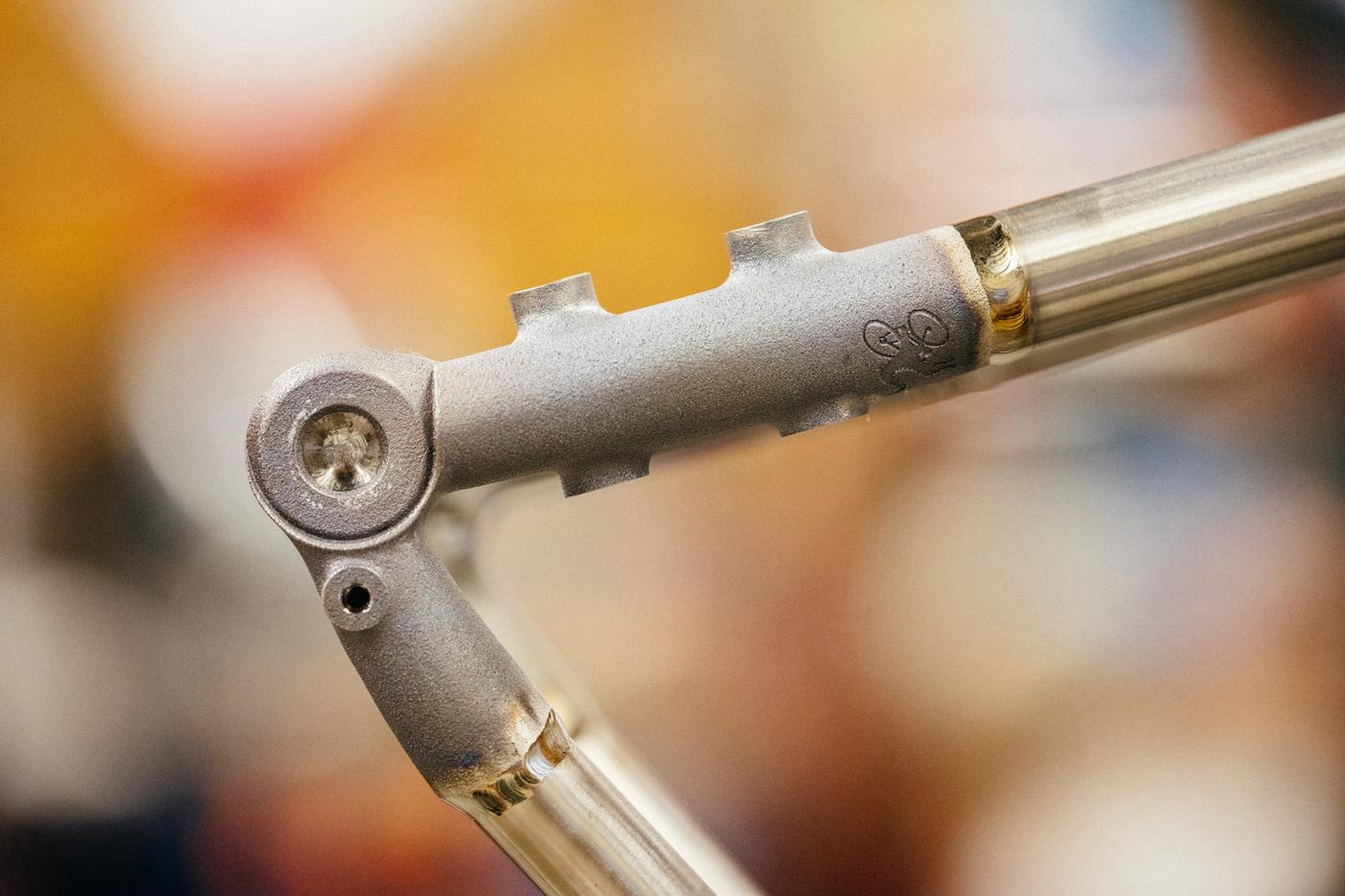 They’re Not Just Gluing Tubes Together

One of the critiques I hear from builders about other builders is “they’re just gluing tubes together.” It’s sad to think that there is bitterness towards each other in this industry, but it happens. The reality of it is, a lot of builders do assemble frames from a kit of parts ordered from Paragon Machine Works, Nova, and other suppliers, but you know what? That’s ok! A lot of the custom or production frame market gets unexpectably caught up in the “bespoke” market and not everything has to be a work of art, the result of countless hours of filing, shaping and finishing. Sometimes you just need a no-nonsense bike that you can shred for years without feeling the need to wipe it down with a diaper after each ride. 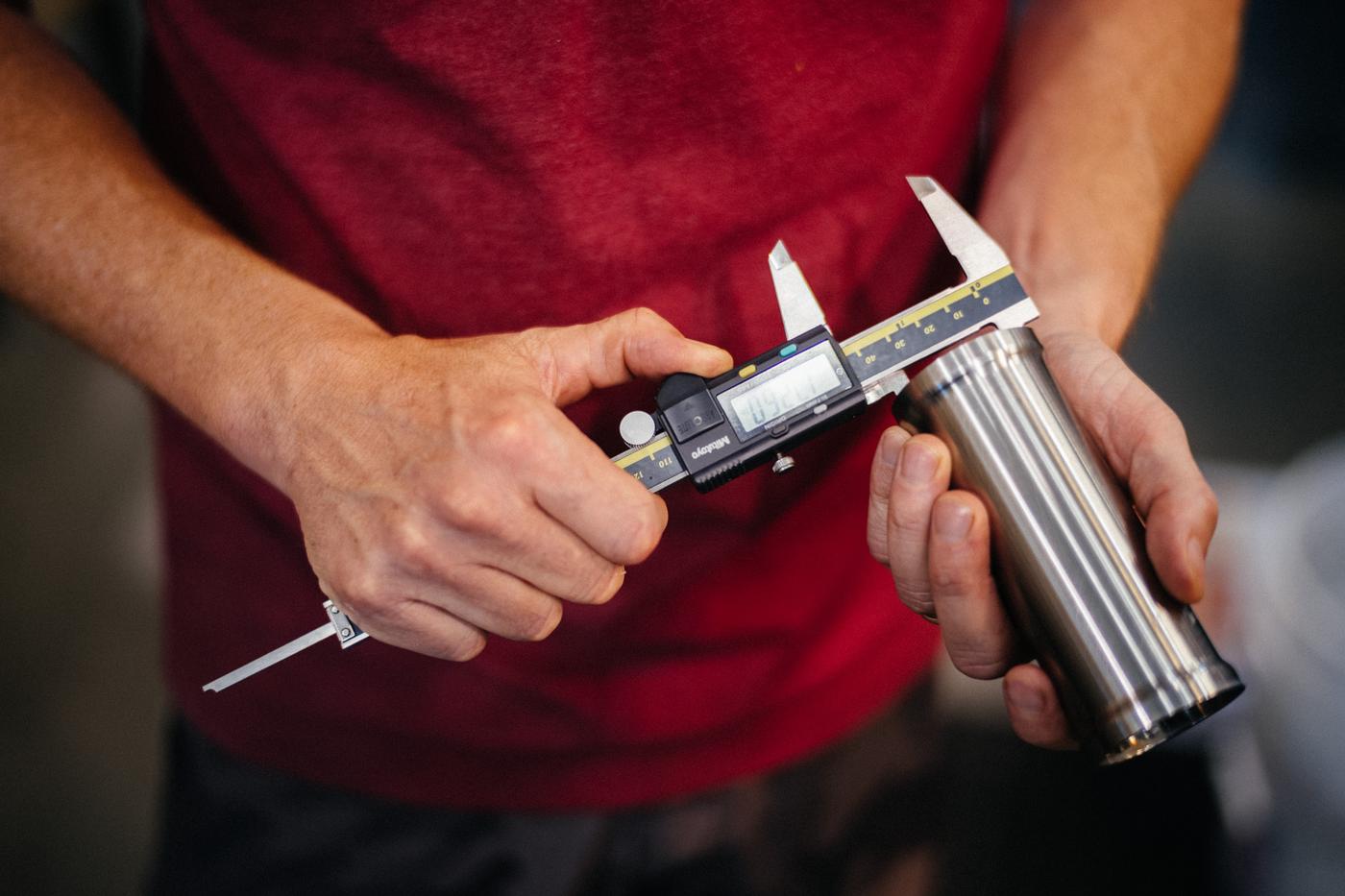 That said, Moots does way more than just assembling bikes. In fact, a few years back, the company decided to undertake a giant project. They decided to machine every single frame bit needed to build a bike, down to the bottle bosses and disc studs. They machine stem faceplates, dropouts, headtubes, bottom brackets, everything. If it goes onto one of their frames, they machined it. Even their YBB soft tail system is done in-house. The only thing they outsource are their 3d-printed dropouts. Hell, I could see them doing that in-house shortly though!

My favorite part of the operations was talking to the people in the welding department. They strive to produce the best welds humanly possible and it shows! There’s a misconception that Moots cleans up their welds before finishing them and I can say 100% that is not true. The welds that leave the shop are immaculate but there’s a lot that goes into that perfection. Kelsey just started at Moots last week. She has completed welding courses and was ready to take on frame construction. Under the guiding eyes of Caleb, one of the other welders, she has been practicing on spare tubes all day, every day, striving to become an experienced titanium welder. I got to see some of her earlier work, as well as her latest welds before I left town. I can’t wait to see how they look the next time I swing through! Not Your Dentist’s Bike

You can’t talk about Moots without mentioning the stigma that is the “dentist bike.” I get it too, they are expensive frames, yet people won’t hesitate to drop the same amount of money on a Chinese carbon road frame that will be replaced in a few years. No doubt dentists buy Moots, but so does everyone from mechanics at shops to graphic designers and endurance athletes. These frames are anything but disposable too. If you want updated disc dropouts, fender, or rack bosses, the team can retrofit your frame, within certain parameters… 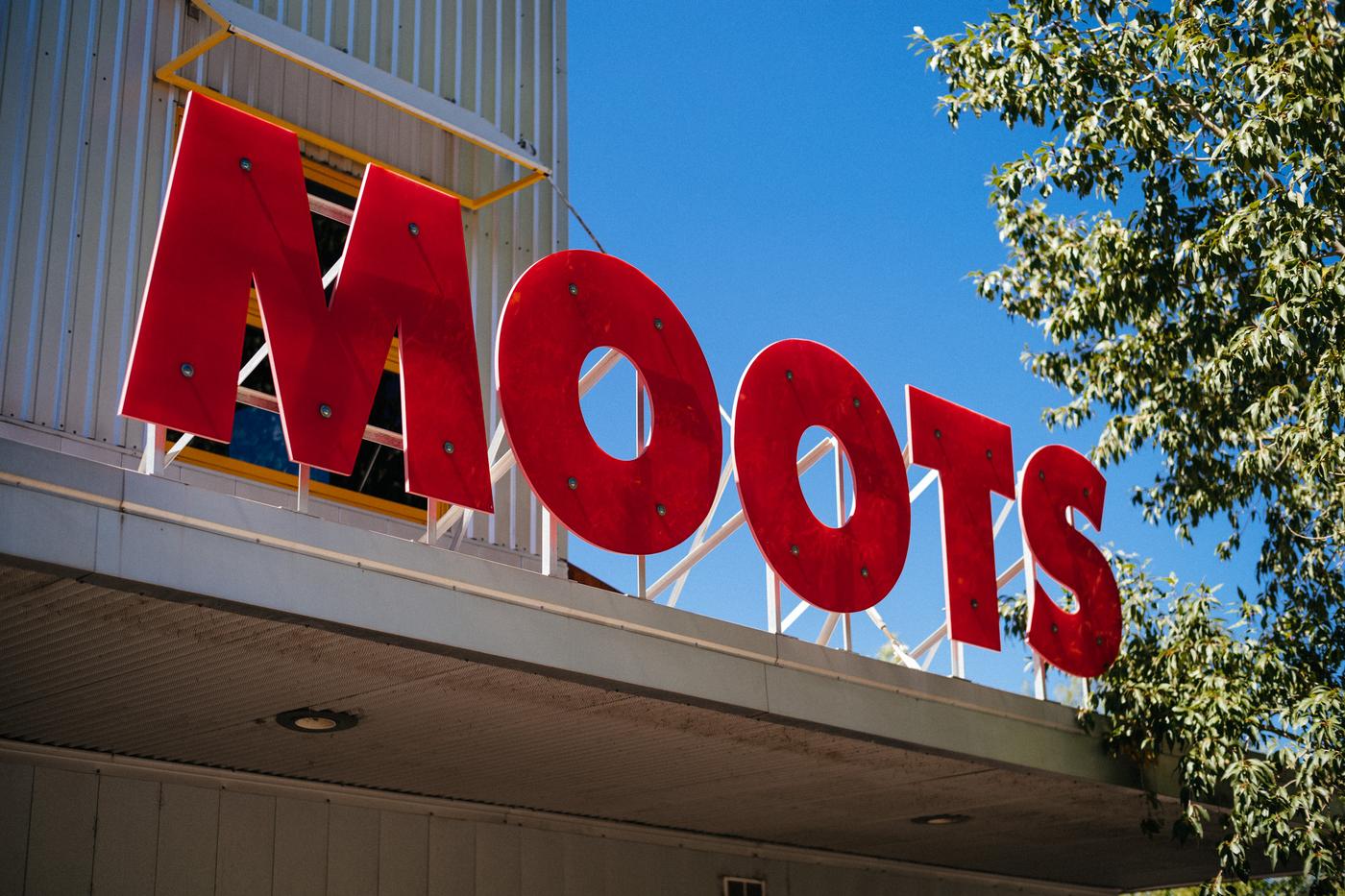 My favorite thing about the Moots factory was seeing all the employee’s personal bikes, which we’ll look at in detail later. These are bikes with souls. Utilitarian machines that they commute on, race on, tour or bikepack on, and they’re hardly babied. These bikes and the people that ride them are what make a Moots a Moots. Yes, they are expensive, but that’s because the product is literally the best you can buy and they are made by humans who make a living doing what they love. You’re not paying for an exec’s sports car when you buy a Moots, you’re paying for the heart and soul each person at that company puts into each and every frame.