With ancient podocarp forest blanketing the trail beneath me, I stand, perched on the escarpment about halfway through the Paparoa Trail. The mountain wind forces tears from my eyes and between the momentary breaks in the cloud, I catch a glimpse into the deep channels of Pike River valley, which once held the Pike River Mine. In November 2010, a gas explosion trapped and killed twenty-nine miners. It was one of the darkest days in modern New Zealand’s history and sent shockwaves throughout the world. Though their bodies were never recovered, the families of the “Pike29” wanted to create something to memorialise their loved ones. So in 2014, they proposed the design and build of “The Paparoa and Pike29 Memorial Track” to the Department of Conservation (DoC), which invested $12,000,000 and some of the best trail builders in the country (including one of the designers of Old Ghost Road). The result is a 55km, mixed-use hiking and mountain biking trail. A trail that winds through alpine tops, limestone karst landscapes and thriving rainforests with breath-taking views if you’re lucky to ride it on a clear day. It’s best ridden from south to north, starting at Blackball in the southeast and ending in the coastal village of Punakaiki. The trail itself joins 14km of historic mining trail with 41km of new build, assiduously dug and blasted out by hardworking volunteers. It boasts three premium backcountry huts, four major suspension bridges and just the right ratio of ascent to descent to keep things interesting. 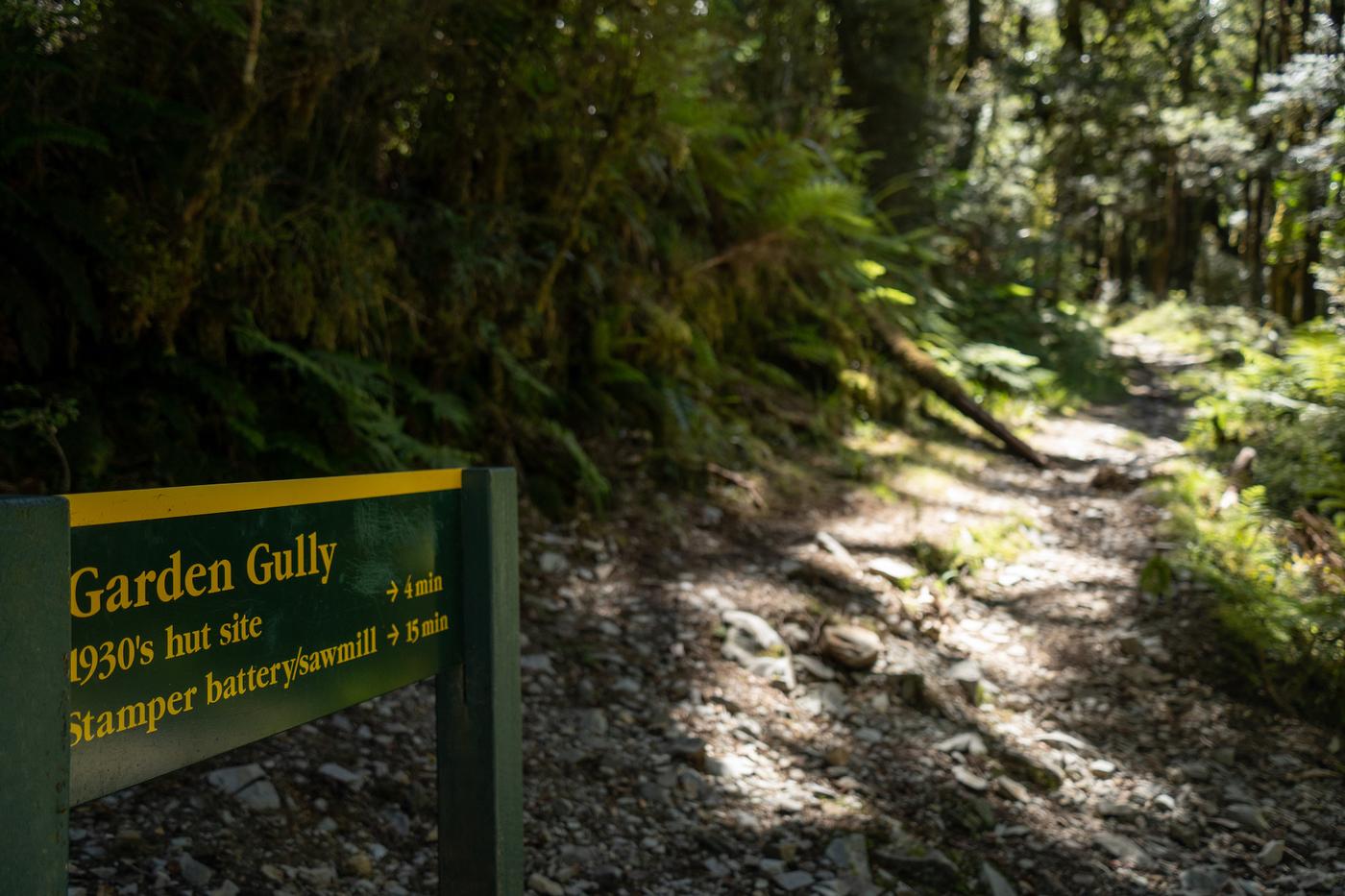 En route to the southern trailhead you pass through the kooky mining town of Blackball. Famed for the 1908 miners’ strike which lead to improved working conditions for miners and later the establishment of the New Zealand Labour Party. From Blackball, you head up Roa Road and onto the start of the trail at Smoke-ho car park. Almost immediately the ascent begins up the historic Croesus Track, built originally in the 1880s. Thick, dense beech and gnarled native podocarp forest smother the trail, blocking the sunlight almost completely. This section of the trail remains relatively untouched by the modernising efforts seen elsewhere in the track and, as a result, it’s tough going. The grade itself isn’t bad, but the floor is awash with loose, jagged rocks and slippery leaf litter that make finding traction difficult. The first ten kilometres tick by slowly as we haul our rigid touring bikes over suspension bridges and up the switchbacks toward our first hut stop of the day. 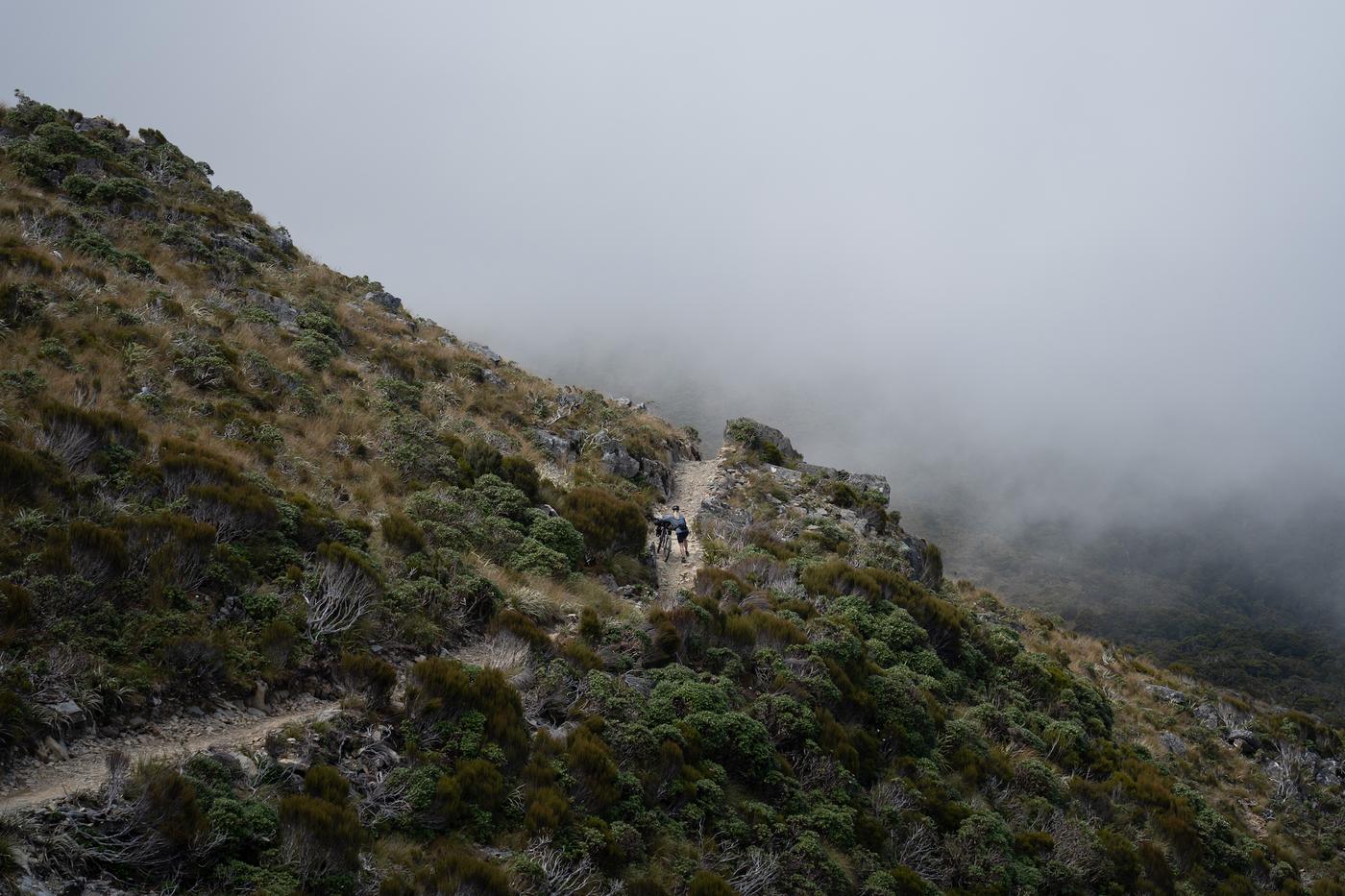 Ces Clarke Hut perches at the edge of the bushline about 10km up the climb. Set amongst subalpine forest, on a clear day you will be rewarded with views of Lake Brunner, the main divide and Aoraki (aka Mount Cook) if you’re lucky. After a quick cream cheese and jam bagel, we hop back on the bikes and continue climbing. Above Ces Clarke, the Paparoa really comes to life and almost immediately we’re engulfed by mountains. The mighty upper Grey Valley behind us and to the West, the Tasman Sea shimmers beneath a thin ribbon of surf. “I’ve never been on a trail where you can see the mountains and the sea at the same time before,” I yell out to Bec. “Welcome to New Zealand, Sam!” she gloats, as she bombs down the next section hugging the rocky trail tightly. 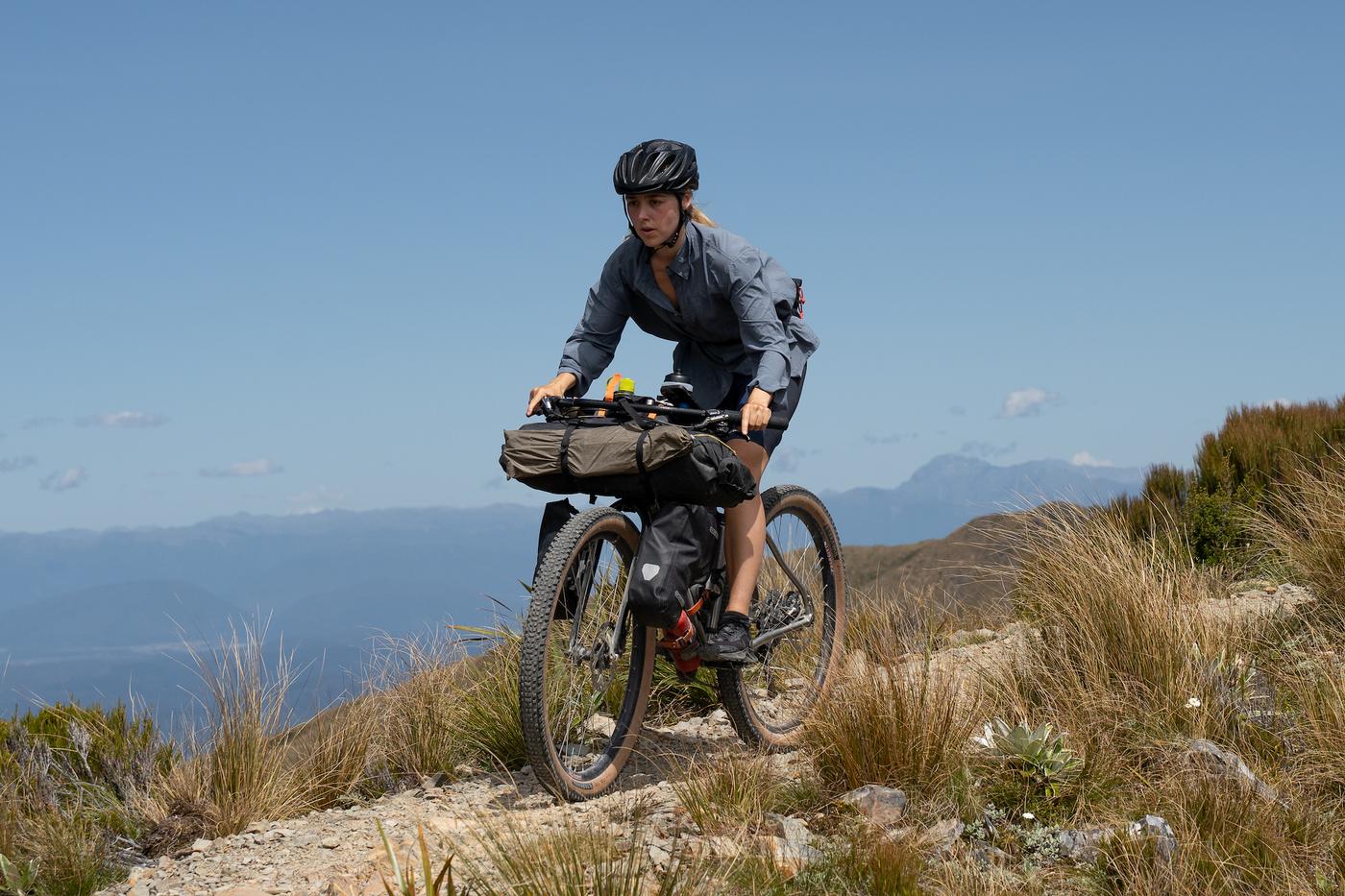 As we flow along the main Paparoa ridge, the undulating trail just gets better and better. Dense green forest gives way to yellow-tinged tussocks that line the dirt track perfectly. Mt Ryall (1200m) rests patiently ahead of us as we traverse our way along the top of the ridgeline. The rumble of Tasman Sea breathing in the distance urging us up every pinch climb and down every drop off. We pause for a moment at the top and watch as a patch of mist eerily wafts over us, blanketing the track with its cool embrace. What a privilege to be able to ride this. Mountain ranges as far as the eye can see, the expansive ocean out to the West and top-class trail building in an area previously inaccessible for 150 years. A trail built out of tragedy, but now a symbol of renewed hope for the “Pike29” and an opportunity to bring economic buoyancy to the region. For most people riding the trail over two days, Moonlight Hut is the perfect place to spend the night. Situated perfectly at the 20km mark of the ride, the promise of a bunk bed, gas stove and fireplace provides oft-needed sanctuary from the typical West Coast weather. Comfort called to us like a siren luring young sailors toward the rocks. “Bec, do you think we should call it for today and find a place to pitch the tent around here for the night?” I ask, hoping she’ll take the bait. “In 9km we hit the escarpment. It looks like there’s flat ground there if you’re able to make it that far?” Bec replies winking at me and heads toward the bikes. 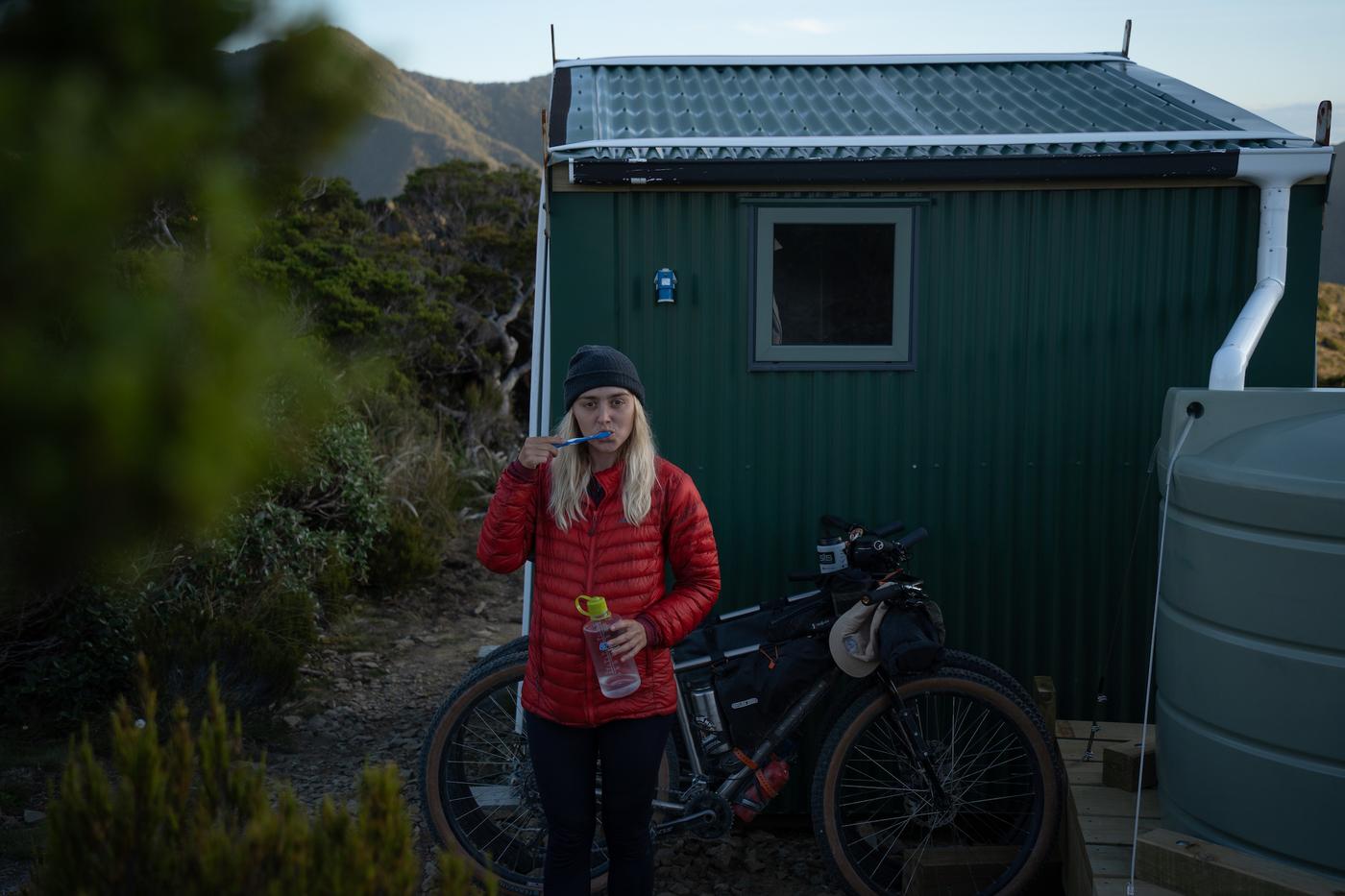 From Moonlight Hut the riding landscape changes once more. From the wide-open tops, you plummet back down into alpine forest stunted by the harsh environment. Fast and flowy, this section hugs the spine-like trail closely as you fly down the track, up and over another pinch climb and out onto the Escarpment. From the edge, we could pick out Pororari Hut on the ridge below. In what felt like seconds we’d hit our extra 9km mark and so decided to stop for the night. While fit riders will be able to complete the trail in one long day, we felt the Paparoa deserved to be savoured over two. So as the sun cooled, casting its warm tangerine glow over the ranges, we found a small spot outside a trail shelter to pitch our tent for the night. 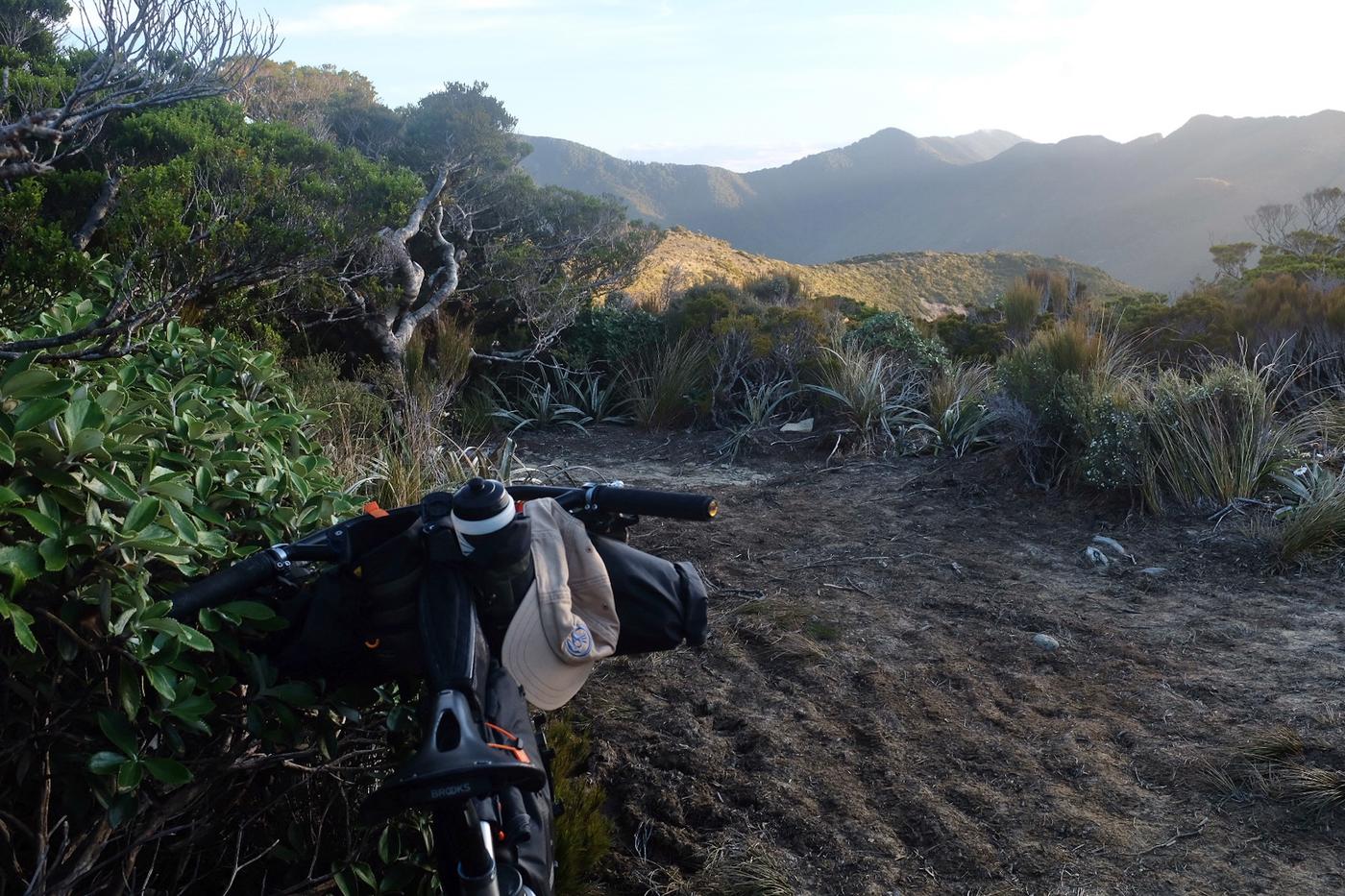 It was time for the home stretch. For us, 27km of unbridled downhill trail and boy were we excited after the day climbing yesterday. Straight into the action, we snake our way down exposed trails, blasted into the mountain’s hard face. With sheer drop-offs on either side, we’re reminded of some of the riding we encountered on another NZ favourite trail, The Old Ghost Road. As we continue our descent, we plummet into the dense forest, the trail turning into what feels more like a pumptrack as we gather pace. The rainforest is a riot of colour and noise. Lurid green ferns, spiky tropical nikau palms, and northern rata explode around us. Birdsong fills the air as we spot wekas, fantails, pippets and kererus enjoying the abundance of the forest alongside us. The warmth of the coastal air surrounds us, heavy and dense. The humidity builds and sweat pours as we  encounter more and more riders coming ‘the other way’ on day rides to Porarai Hut and back. What I’ve come to love about these long-distance NZ trails is the fact that they attract a huge diversity of riders. From adrenaline-fuelled brevet riders training for their next event, to families teaching their kids how to ride backcountry trails – we encountered them all. My favourite though was Stu, a 55-year-old DoC worker sporting a ‘well-loved’, rigid 90’s Specialized Hardrock. We rode together for a while, me barely able to keep up as he chucked his 26″ wheeled rat rod down the trail like he’d be riding it his whole life. Before I know it, we hit the final two crossings. Over a suspension bridge at Pororari River and straight to the second crossing where the Paparoa splits for the final kilometres. Riders turn left onto the old Inland Pack Track, as hikers take a trail alongside the river. The final, low saddle climb over the inland ridge hurt, but soon enough we were flowing through glades of nikau palms and on to the finish line at the Punakaiki River. The Paparoa Track is another shining example of New Zealand’s ability to create world-class, mesmerising, point-to-point single-track trails. With both The Heaphy (79km) and The Old Ghost Road (85km) just a little further to the north, the addition of The Paparoa creates a holy trifecta of trail riding goodness. But it’s more than ‘just’ a trail. Having ridden here, having learnt its story, The Paparoa Track is also a fitting way to celebrate the land and the lives of the “Pike29” miners, may they rest in peace.