The Baxter was a blip in a long line of adventure bikes to grace Moots’ 40 years of building frames in the Rockies. Personally, I really liked the Baxter. It held its own in the Steamboat Ramble Ride and tackled our “Disconnected” project in the Inyo Mountains with SRAM but the Baxter had some quirks that needed to be addressed. With the Routt ESC, Moots did just that, abandoning the Baxter model altogether.

In an era where adventure, gravel, touring, and bikepacking bikes are seeing lots of permutation, there’s no time for nostalgia. Brands need to address their bike’s quirks and redesign as needed. That’s where the Routt ESC comes in. It’s like the Baxter and the Routt gravel line had a lovechild, which resulted in a completely new paradigm within the Moots catalog. Let’s check out this new Routt ESC bike in more detail below! 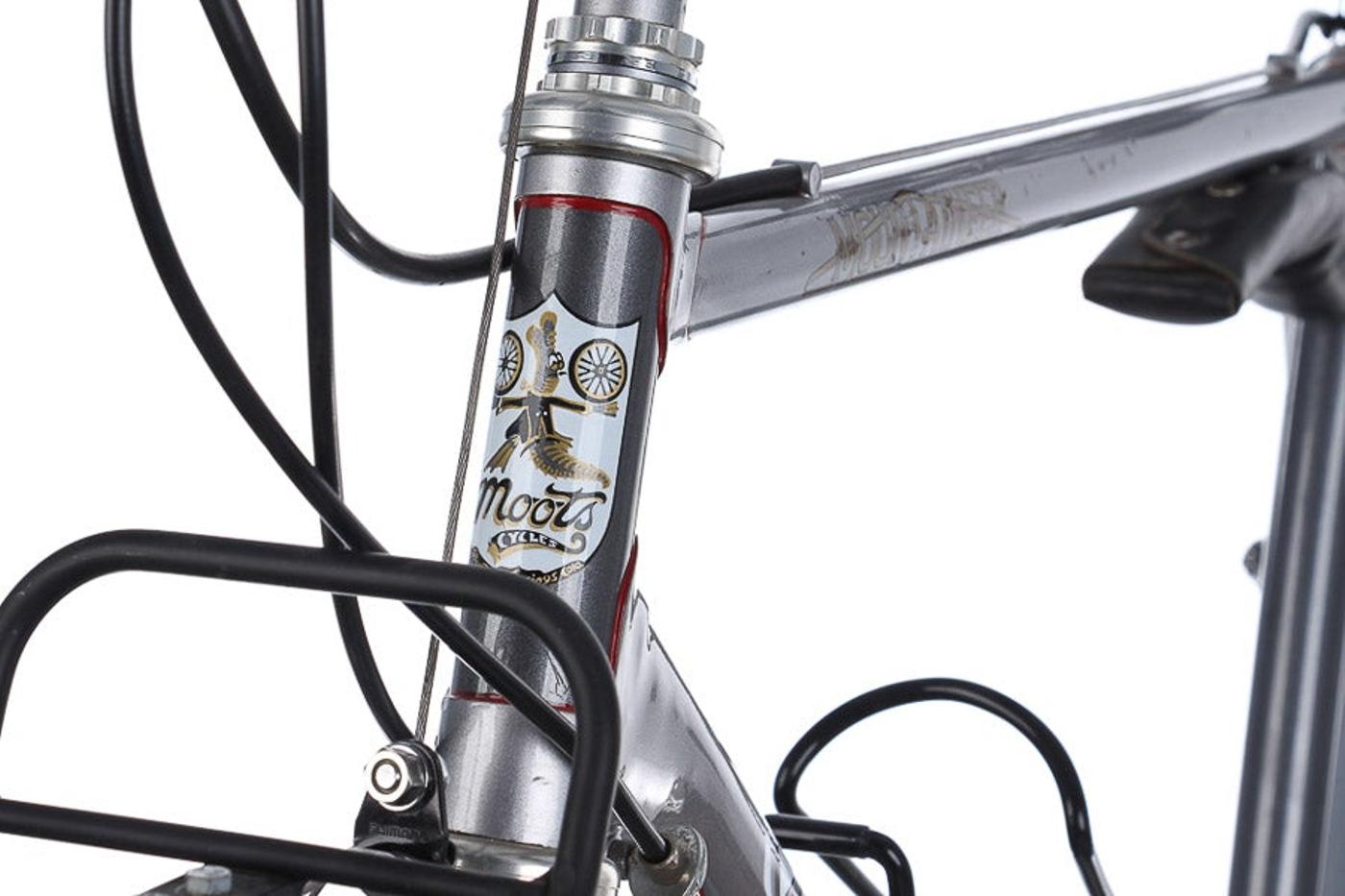 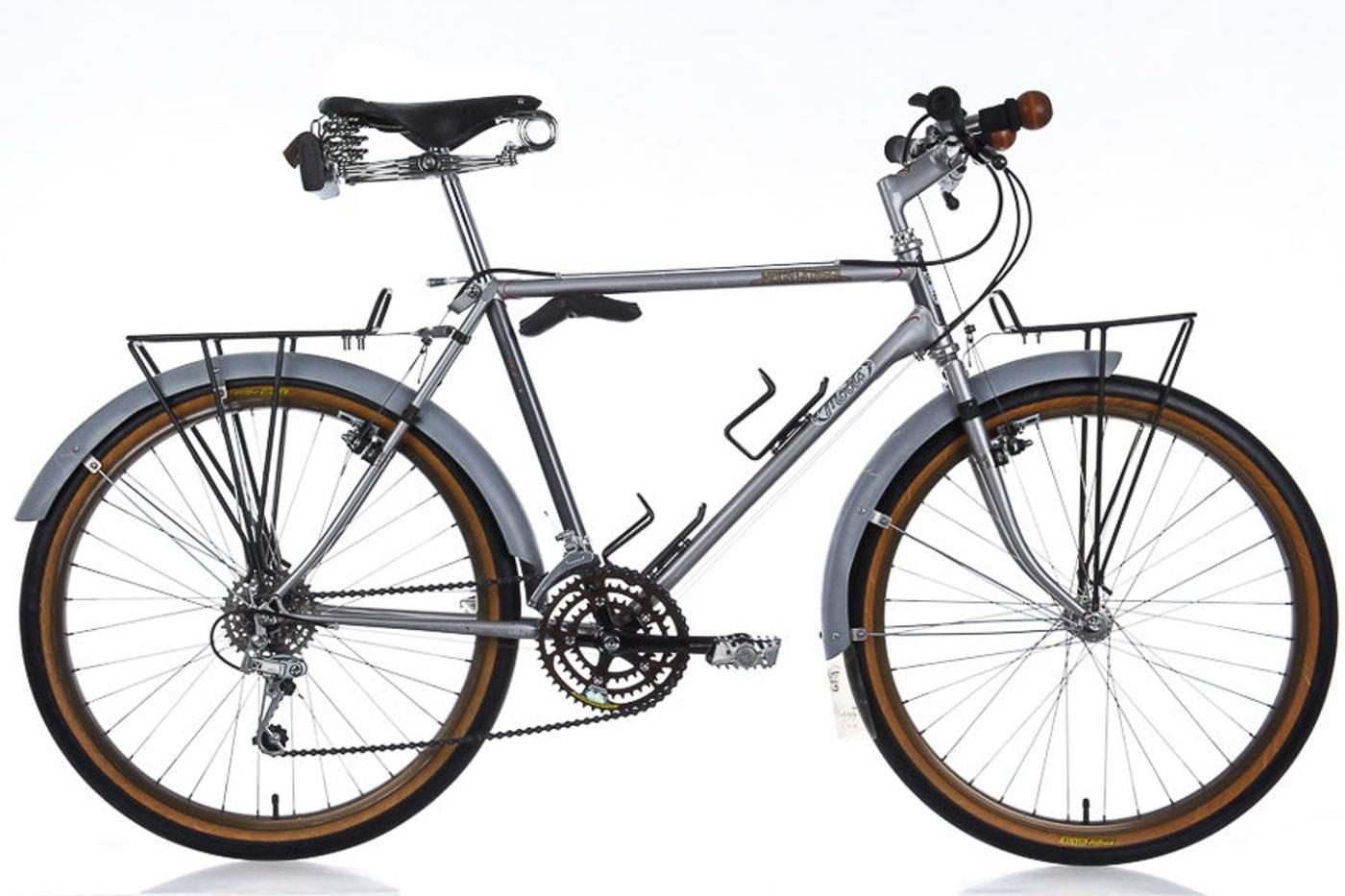 Moots: A Legacy of Expedition Bikes

The first time I saw a Moots Mountaineer in my adolescent years, my mind was blown. I had never seen anything like it before. What stuck with me was the head badge, which depicted an alligator in a tuxedo balancing two wheels. As a lover of reptiles, I couldn’t get that image out of my head. It was like two passions colliding upon a vehicle of pure unadulterated adventure. At that point in my life, bikes were a form of independence from my then car-free existence and overreaching parental guidance. Suddenly, the bicycle became something entirely different to me.

The Mountaineer is just one of many bikes Moots has made over the years that aligned with how I like to ride these days: slow and without intention. 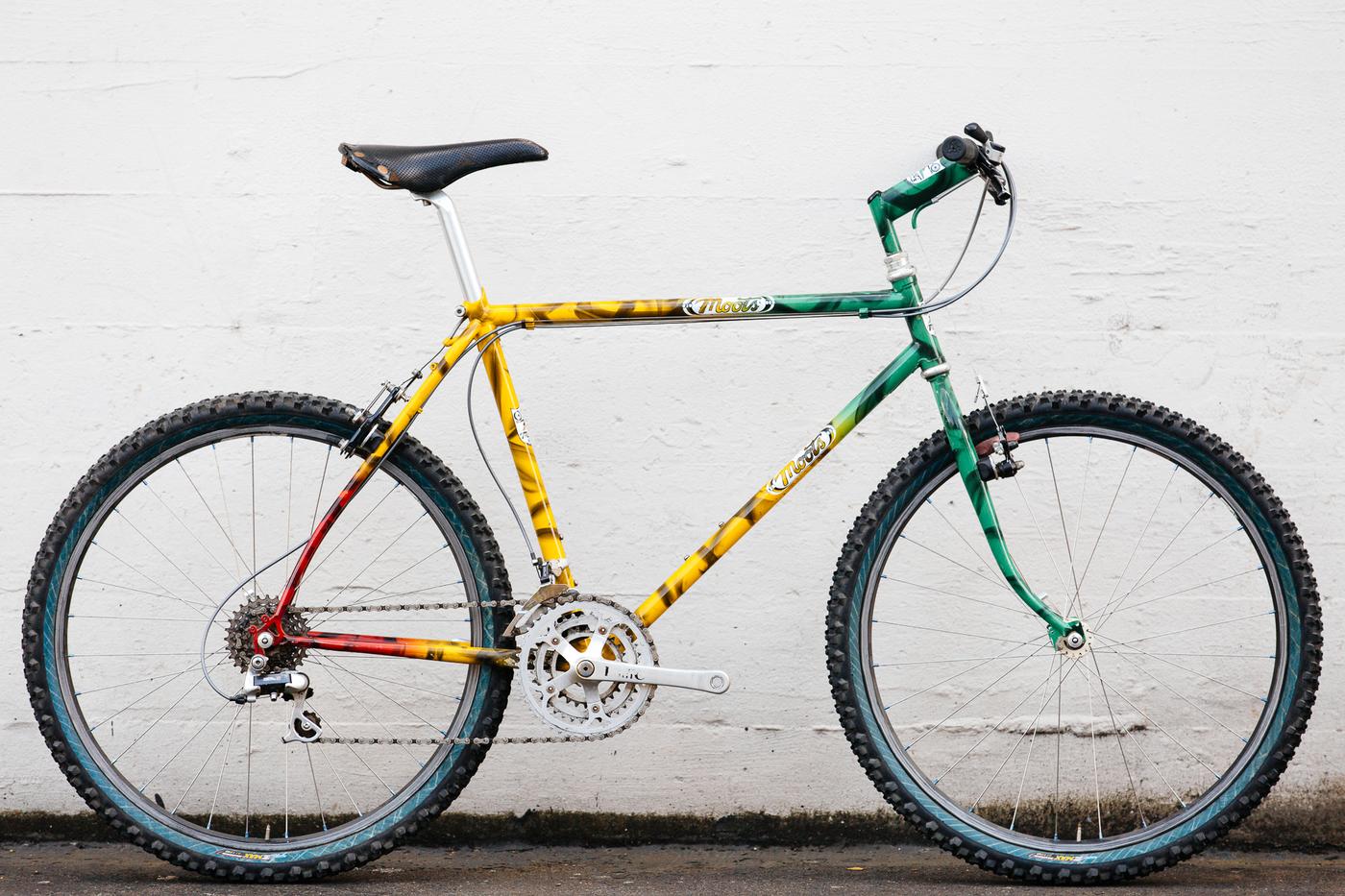 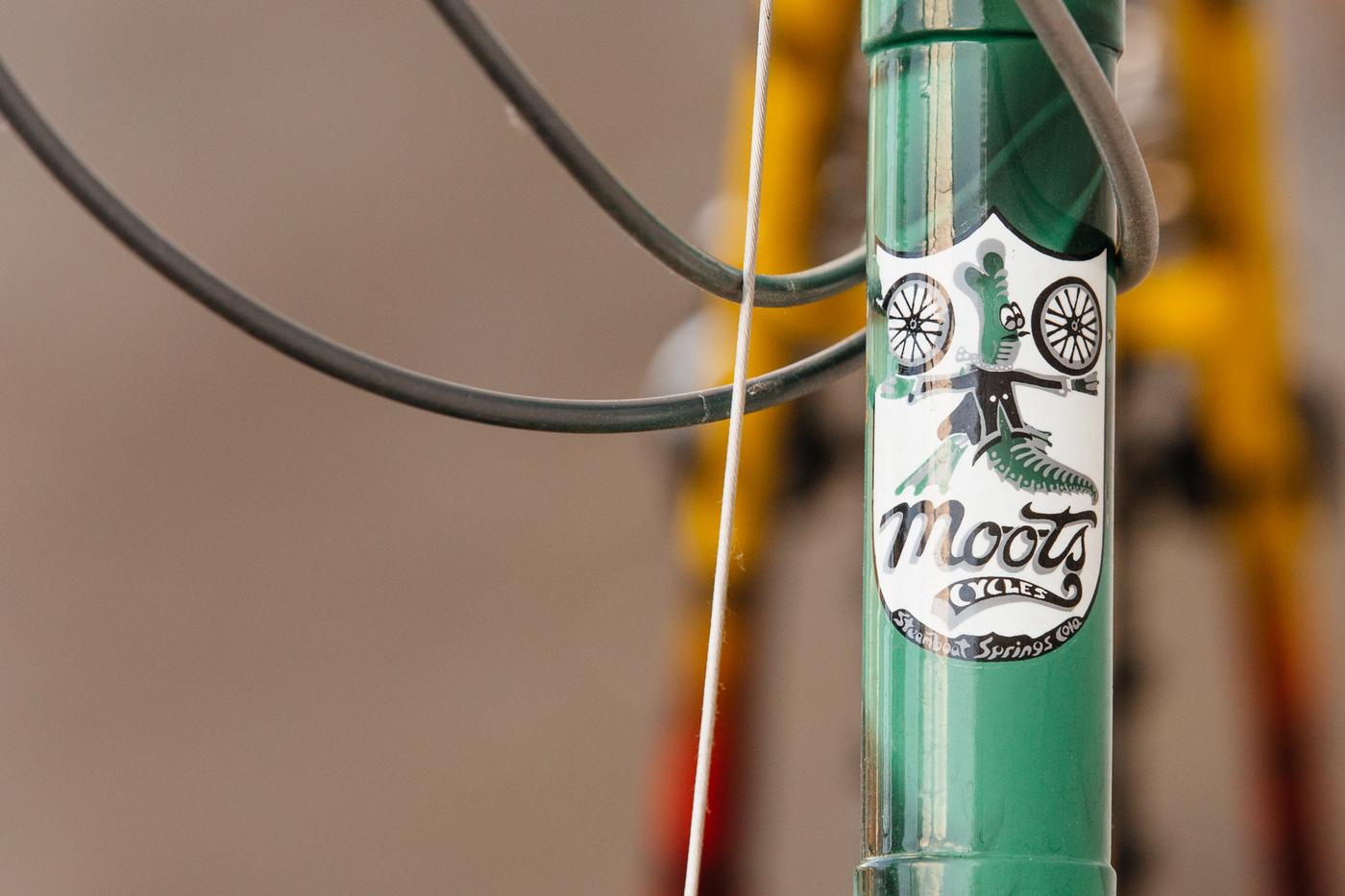 Moots went on to build many more classic steel mountain bikes, such as this 1989 Zerkel I shot back in 2014 before making the switch to building titanium chassis bikes.

Last year was Moots’ 40th anniversary of building bikes like the Mountaineer and the Zerkel, as well as modern classics like the Routt 45 and Womble. Since the early days of Eriksen, the brand has had its ebbs and flows but one thing has remained a constant in its catalog: capable mountain and gravel bikes. The Routt ESC is just the evolution of this progression. 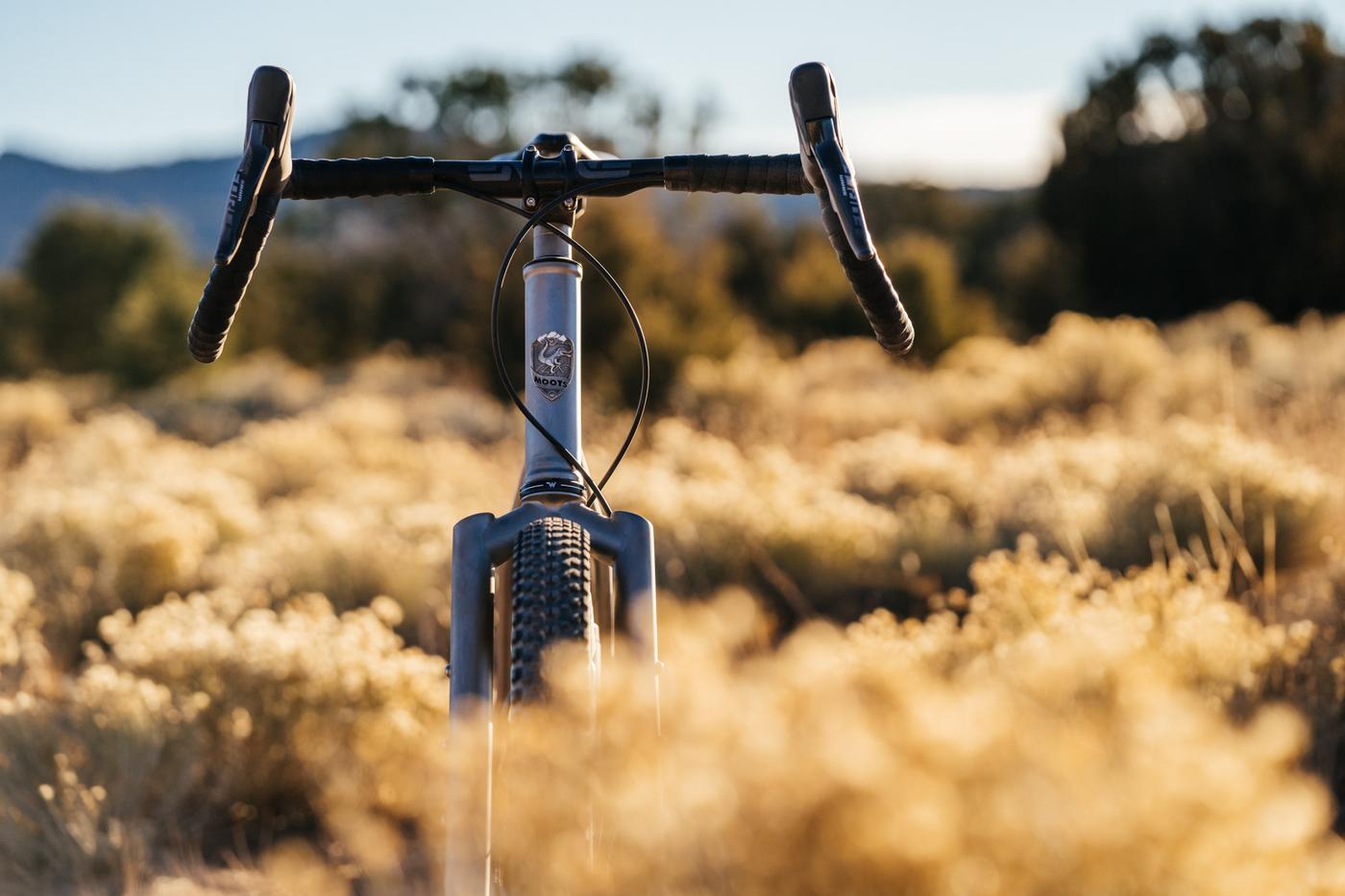 The Routt ESC is the latest member of the Routt family of gravel bikes, yet to call it a gravel bike at this point in time isn’t entirely accurate for a few reasons. First of all, the Routt ESC uses MTB boost wheels. That means the rear wheel is 148mm spaced and the front is 110mm spaced. Second, the Routt ESC has more of a touring bike or expedition bike fit, with a taller stack height. In fact, the only thing “gravel” about the bike is the crankset and its Q-factor. In many ways, what didn’t work with the Baxter informed and influenced what works really well with the Routt ESC: boost spacing wheels.

What this means with the Routt ESC is you can drop your MTB wheels in this frame with ease but you won’t be able to swap your entire gravel kit over to this chassis. In my opinion, that’s a good thing. MTB wheels are in general a bit beefier and more fitting to the expedition-style riding the Routt ESC opens up. 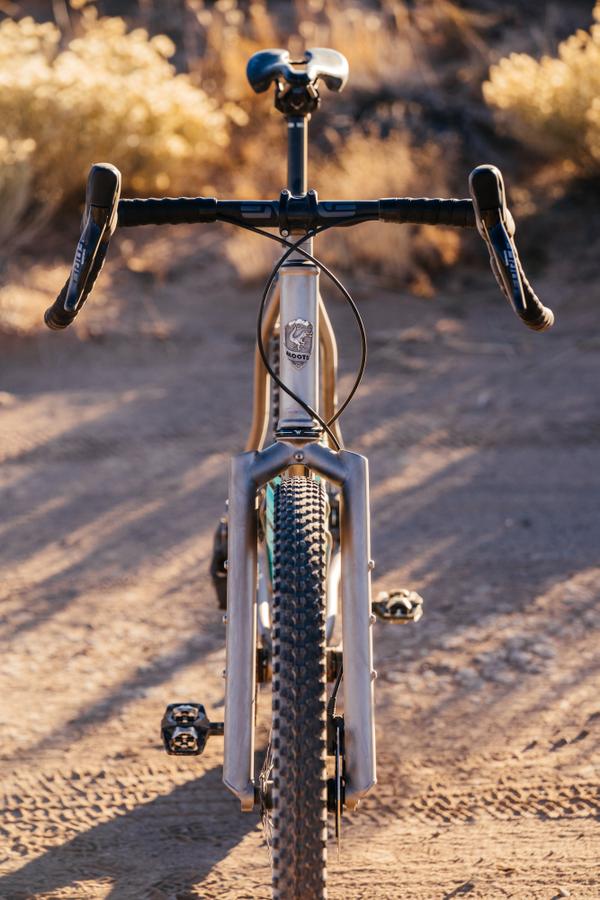 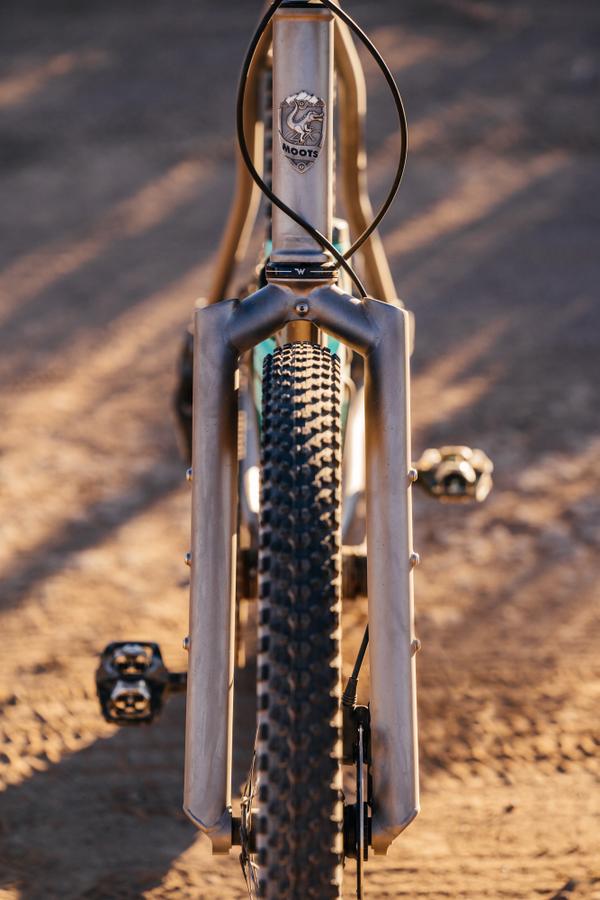 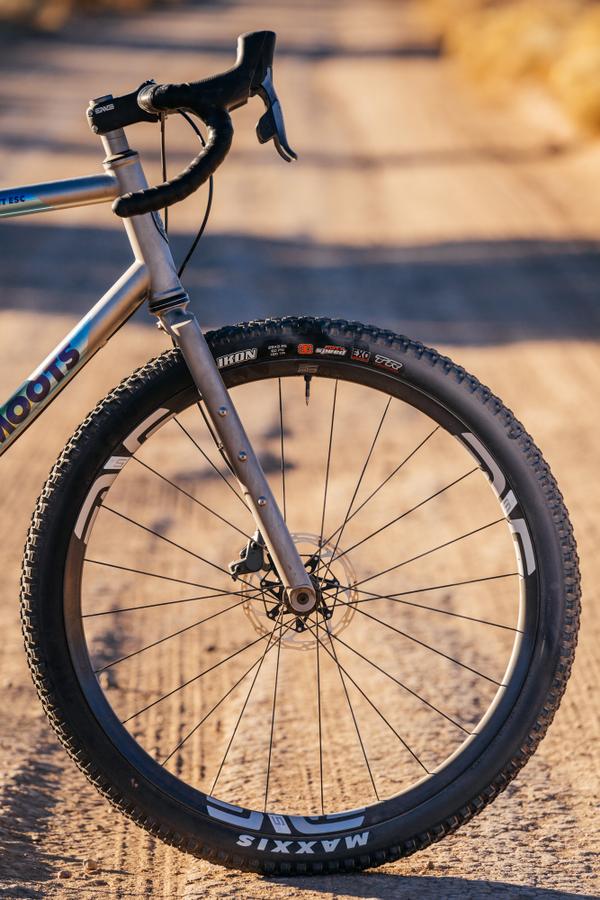 The standout detail on the ESC that has turned the most heads and prompted the most questions during my local rides is the segmented titanium fork. This fork is made by Bearclaw Bicycle Co. They’re the only manufacturer Moots found that supplied the correct axle-to-crown fork in a quantity that Moots would require for the rollout of the ESC. These non-suspension-corrected forks (420mm axle to crown with 51mm of offset) allow for a meaty MTB tire without the excessive space from the tire to the crown that non-suspension corrected forks have. In short: the fork makes the bike look like a gravel bike while offering the clearances for MTB tires. These forks have cargo bosses down the legs, allowing for the use of a lightweight rack or cargo cages. In terms of ride damping, it’s amazing. Steel and Ti forks on bikes like this make all the difference, absorbing bumpy roads and rough singletrack without any sort of gimmicks. 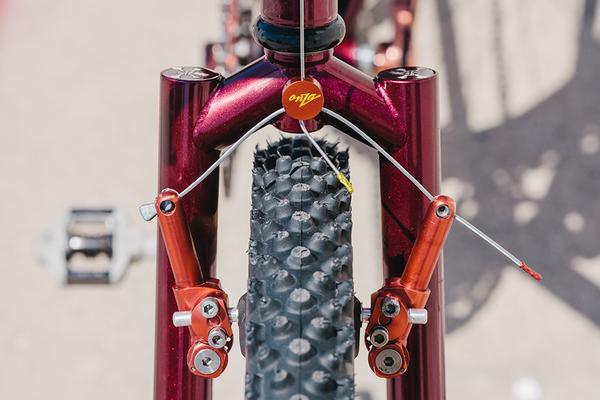 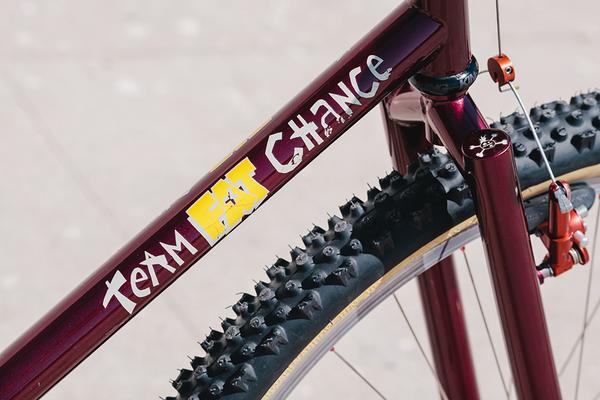 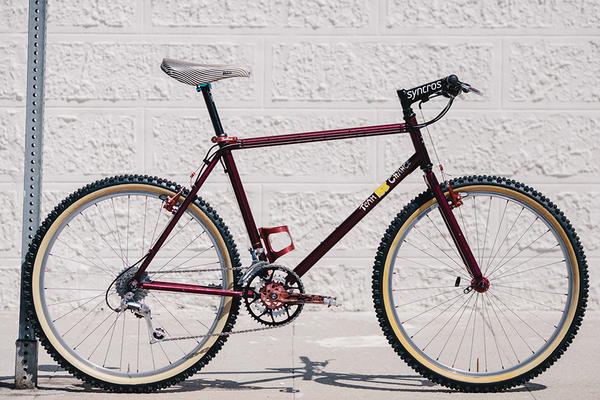 For those unfamiliar with segmented forks, they were designed, engineered, and built by Chris Igleheart for Fat City Cycles back in the 90s. Back then, mountain bike framebuilders were experimental, developing their own unique fork designs in-house. While brands like Ritchey were fillet brazing beautiful bi-plane fork models in California, the Sommerville, Massachusetts, brands like Fat City were looking to differentiate their own designs. After their original box crown forks were failing, Fat City wanted something new. Something that would scream “FAT CITY”. Over one weekend, Chris Igleheart designed the segmented fork and the off-road cycling industry was forever changed.

I’m writing this because Igleheart doesn’t get enough credit for these forks, ATMO, and it’s worth noting this design was his. Lots of builders have adopted this design and it’s not often you’ll read any sort of credit given to Chris. Chris, if you’re reading this, thank you for this beautiful design! 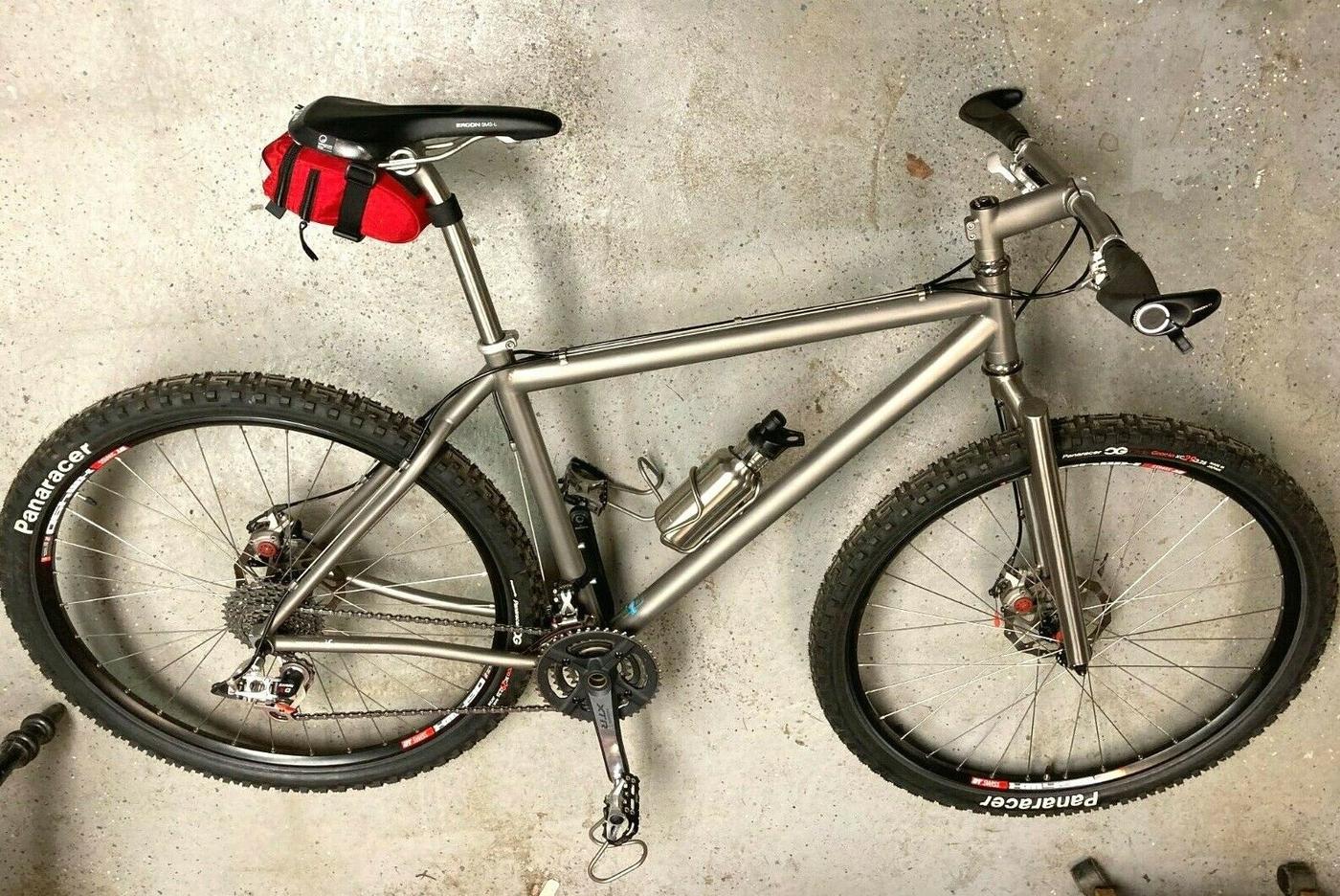 Moots has a legacy of building titanium frames but they’ve never offered an in-house titanium fork. In the early 2000s, they offered up a rigid 29er that featured a fork made by Morati Titanium Bicycle Components, a ti manufacturer. In fact, there was a 2007 example on eBay recently, pictured above. Note how similar it looks to the Routt ESC. This might bring in another round of “gravel bikes are just XC bikes” but there are a lot of differences in the soul of the bike, aka the geometry. 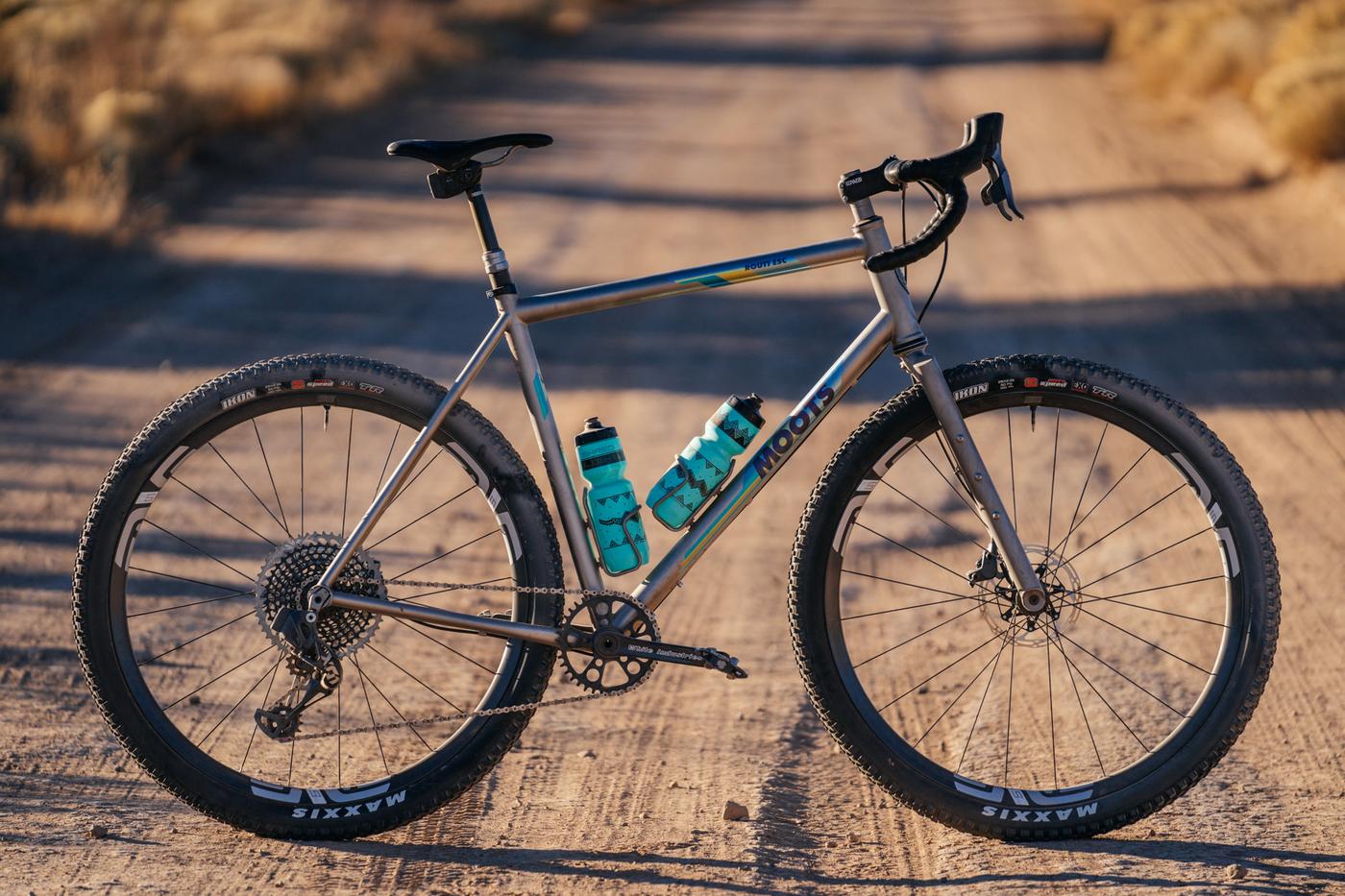 Let me just say, I’m not a fan of all of the nomenclature surrounding this sort of bike. Is it a gravel bike? That’s hard to say since comparing it to a lightweight carbon bike seems like a disservice. What about an XC drop bar MTB? Maybe but it still utilizes a gravel drivetrain and an adventure/touring bike fit. Ok, so what is it?

I reviewed the size large Routt ESC but as a 6’2″ human with long arms and legs, I should have been on the XL. When looking at these numbers, they’re not far off from the Routt 45, which up until the genesis of the ESC was the most robust and capable gravel bike in the Routt lineup. If you compare the size XL ESC with the size 58cm Routt 45, you’ll see the head/seat tube angles, and BB drop is identical. These numbers will tell you a lot about how a bike handles and this comparison says a lot about how Moots approached designing the ESC as a true-to-form “gravel bike” with a slightly different bike fit philosophy… 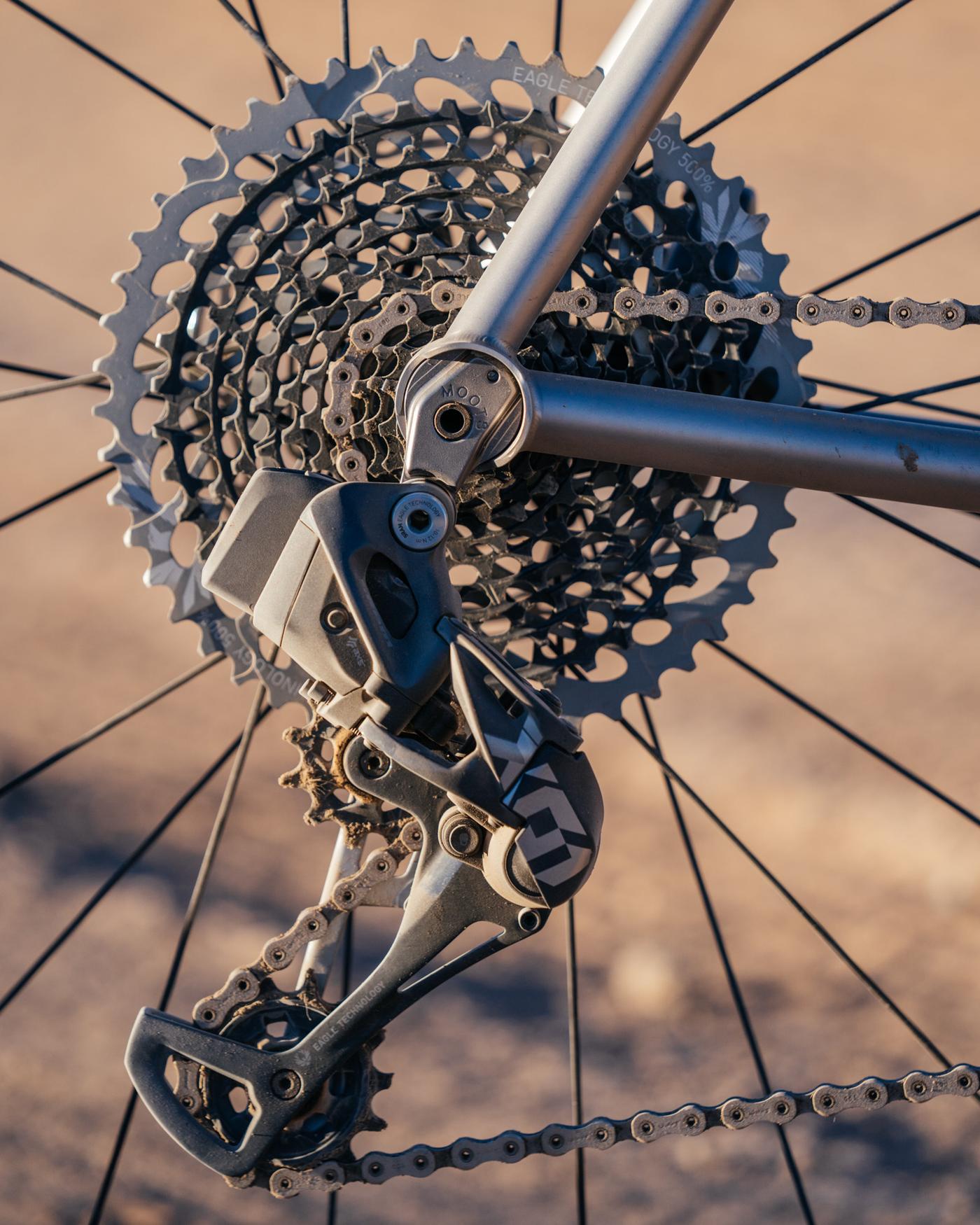 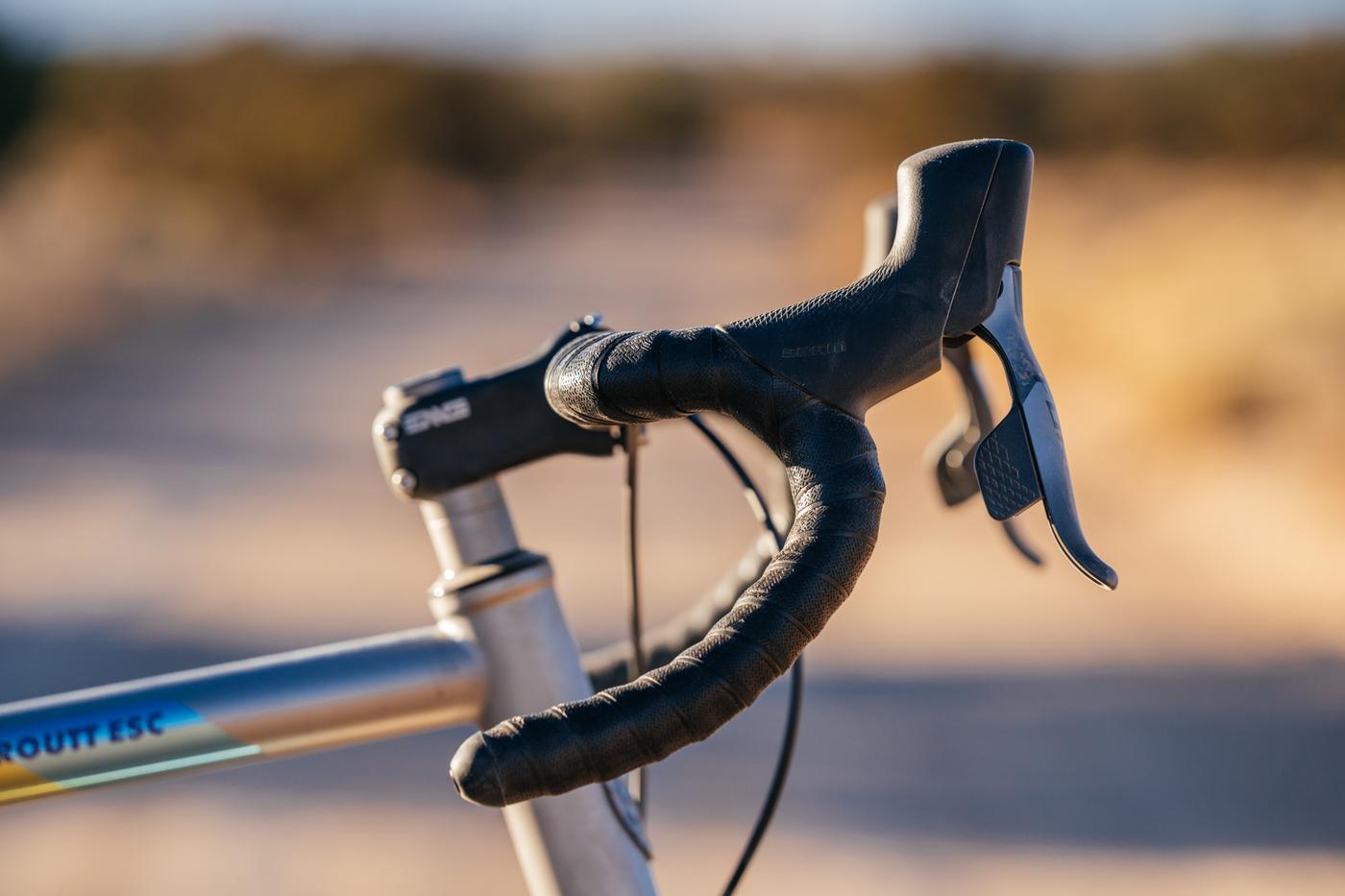 The Route ESC is only available as a complete build from Moots, who will offer two build specs; AXS ($12,000) and Neo-Retro ($9,769). I lucked out and was able to review the AXS/ENVE kit with Moots’ new TransAm anodizing finish, which is by no means a budget build as it comes in at a whopping $12,825 but it was a dream to pedal. Aside from the ENVE cockpit and ENVE/I9 wheels, the ESC came outrigged with a full SRAM AXS Mullet configuration drivetrain. That means it utilized AXS road levers, with an Eagle rear mech, offering up a massive 1x gear range for a drop-bar bike. Then, to make it even more fun, Moots specced the wireless AXS dropper post to make singletrack and rocky descents all the more fun. The ESC is rolling on 29×2.3″ Maxxis Ikon tires but the frame will clear a 2.4″ tire. 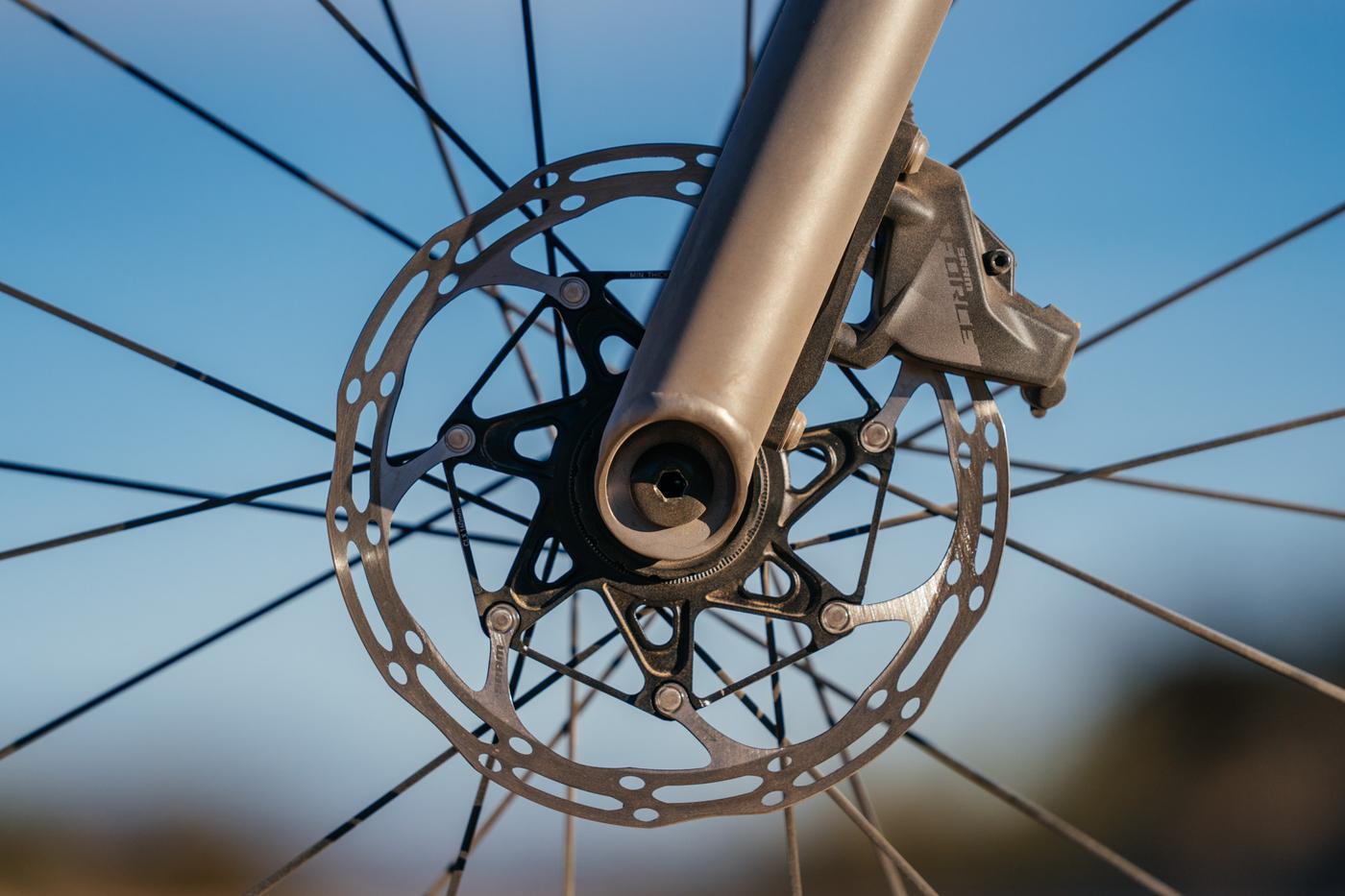 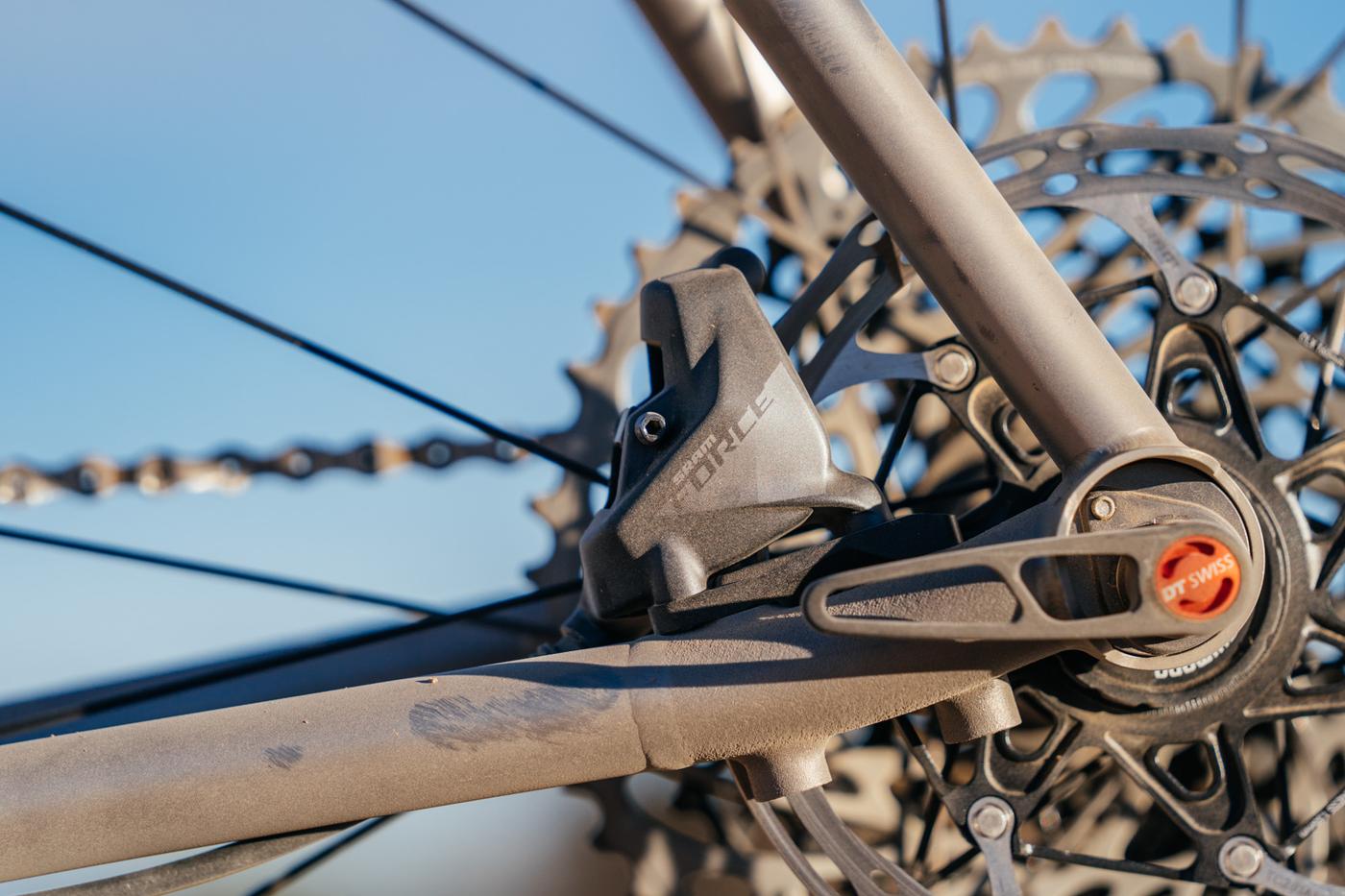 The only thing that bummed me out about the Routt ESC is the flat-mount brakes. If I’m going to load this bike up and take on a tour, the last thing I want to worry about is if these dinky calipers will overheat and begin to “walk”. I truly feel like flat-mounts have a place on road or all-road bikes but I wish brands would stop putting them on bikes like this. Do you think 140/160 rotors would stop my fat ass and all my camping accouterment? Maybe. Are they ideal for the long-haul? Hardly…

I’ll let this Beautiful Builds video, shot and directed by our homie Justin Balog offer up the riding experience of the ESC. I only had this bike for a week and in that time, I was able to do my favorite winter-time gravel loop on it, along with some fun and flowy XC singletrack.

For those without the free time to watch the video, the TLDW version is: the Routt ESC offers a more upright riding position, where riding in the drops is ideal. Its tall headtube is meant to deliver a more comfortable ride overall, where long days in the saddle, loaded down on a bike tour or out on a 120-mile gravel race route won’t wreck your back. This riding position is common for bikes like the Kona ULTD and the Otso Fenrir. If I were to leave for the Tour Divide this year, a bike like this is what I would take as drop bars offer a variety of hand positions and can be more comfortable for the long haul… 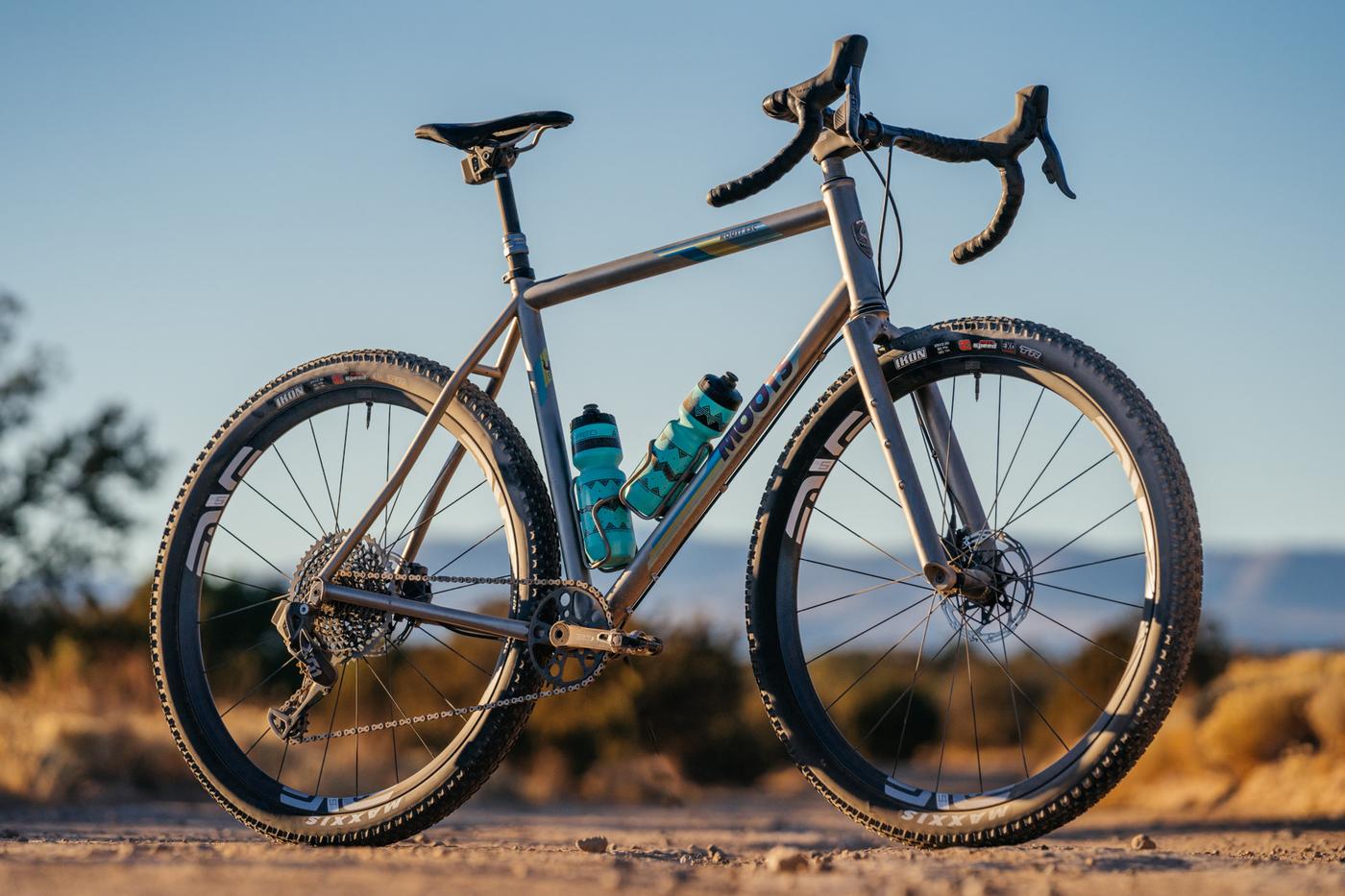 The Routt ESC is the final boss in the Routt lineup, dwarfing its siblings with big tires, a beefy segmented fork, and a more upright riding position. While it is firmly planted in the Moots catalog, it is very pricey and is only available as a complete build, in this balleur specced AXS/ENVE build with Trans-Am graphics, or a slightly less expensive Neo-Retro build spec. Due to its price point, it might not be as common as the Routt 45 has been at various gravel races but it will for sure turn heads.

In terms of riding, it’s very similar to the Baxter but with a boosted chassis and the Bearclaw segmented fork it not only functions more appropriately but it looks the part as well. Unlike the Routt 45, the ESC is meant to be ridden in the drops more, akin to early dirt drop bikes of the 1980s and 1990s. With a slightly taller head tube, stack, and a shorter reach than its siblings, the Routt ESC is designed to tackle all-day adventure rides and longer-term tours alike. This size Large AXS/ENVE build weighs 23lbs with bottles, cages, and pedals.

Yes, it costs more than a compact car or an e-bike but the ESC fills a niche many people demand and is built in the Rockies by cyclists who give a damn.