In modern society, it seems that many of our connections are made in a world of algorithms, a superficial sphere where swipes and likes have replaced the more tactile world I grew up in. This seems intrinsically wrong; we need to be connected physically but we are increasingly isolated from one another, caught up in a world where our eyes and hands are fixed to our screens.

Let me be clear, I do not consider myself a troglodyte; I accept ‘this is progress’ and when the moral compass points in the right direction, we should embrace the advancement of technology. What I am arguing, though, is that this era of technological infatuation should not be at the expense of meaningful connections on a more intimate, human scale. In my world, I want to take a virtual connection and turn it into an actual connection as quickly as possible. 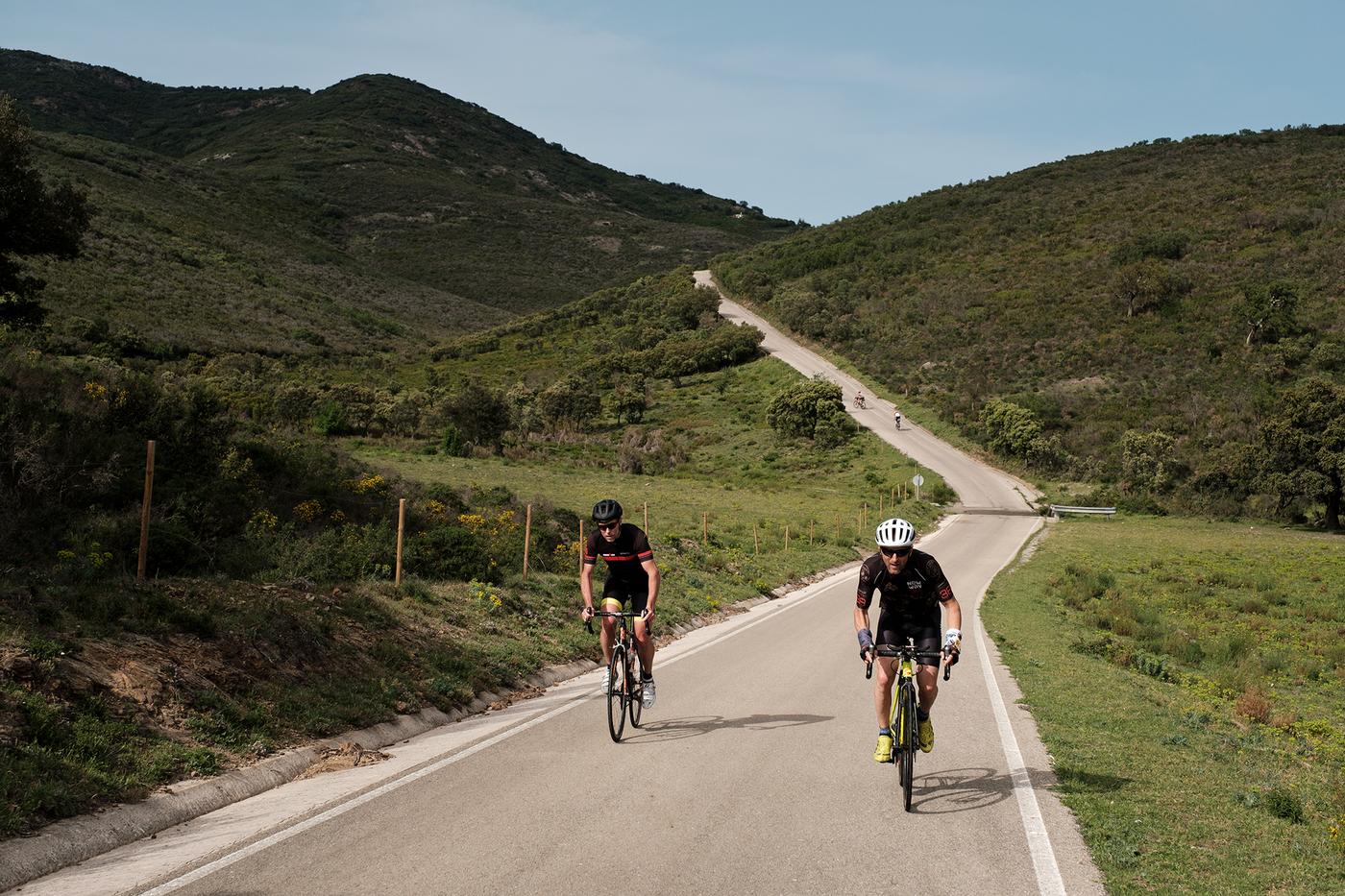 I am increasingly of the opinion that living with complex technology is a misnomer. I watch flora and fauna and they exist without it (and they’re better off for it) and most of the time when humans interfere the natural order, we disrupt age old patterns and rhythms. In our overly complicated time, we have a recurring habit of making mistakes (which we seldom learn from) and the world suffers as a result but, when I strip things back to a binary level and just be, I develop an appreciation of the space around me and a joy for life. 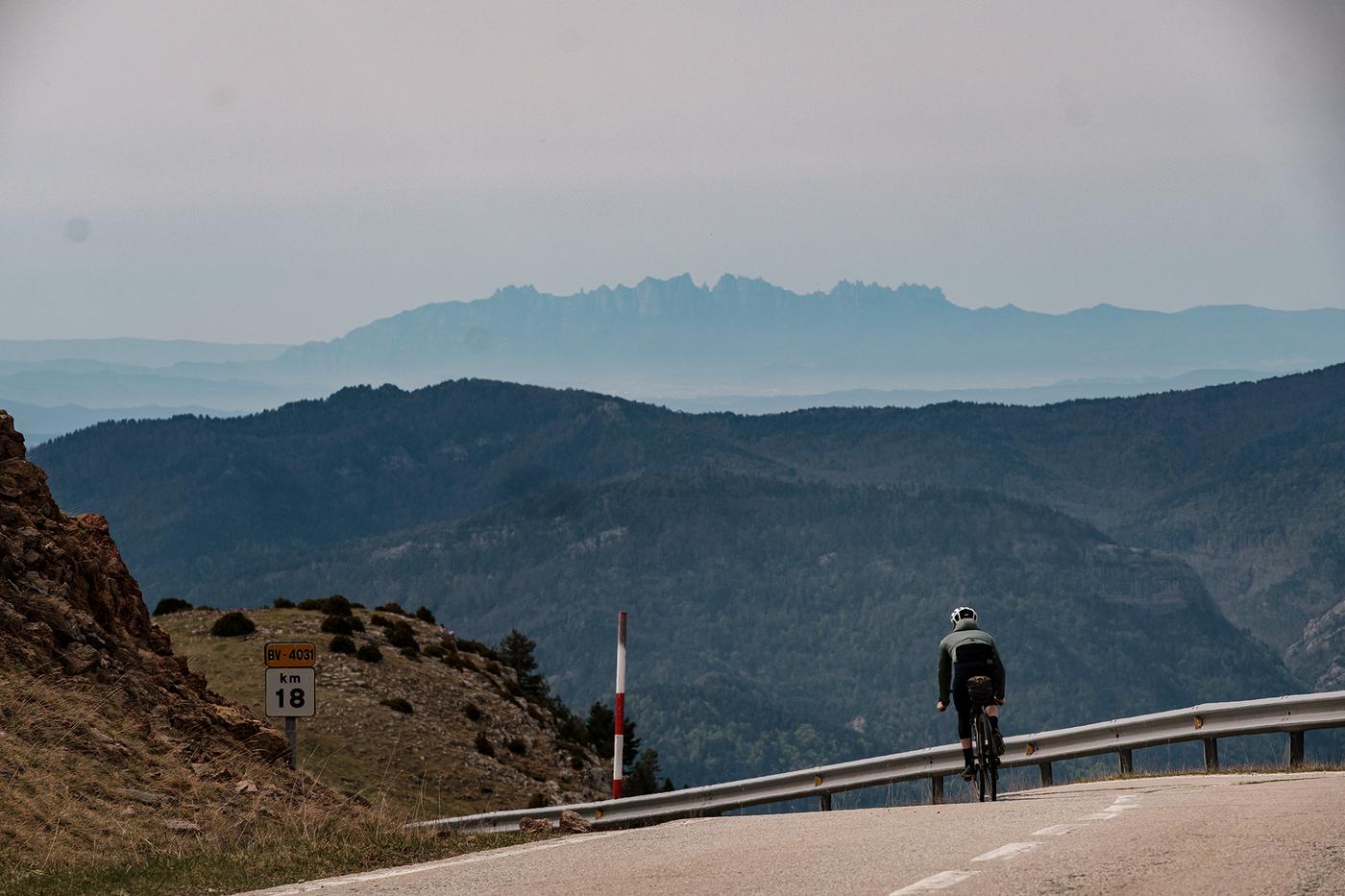 In these more analogue moments, I often find myself wondering what is it that truly links us; to each other and to the natural world and if you afford yourself time and space with people and places, what conclusions will you reach? I have used the bike to connect with people and places since I was a child and time spent with this wonderful machine has been the catalyst for some incredible relationships. There are few people I feel more connected to than my friend, Tomás. 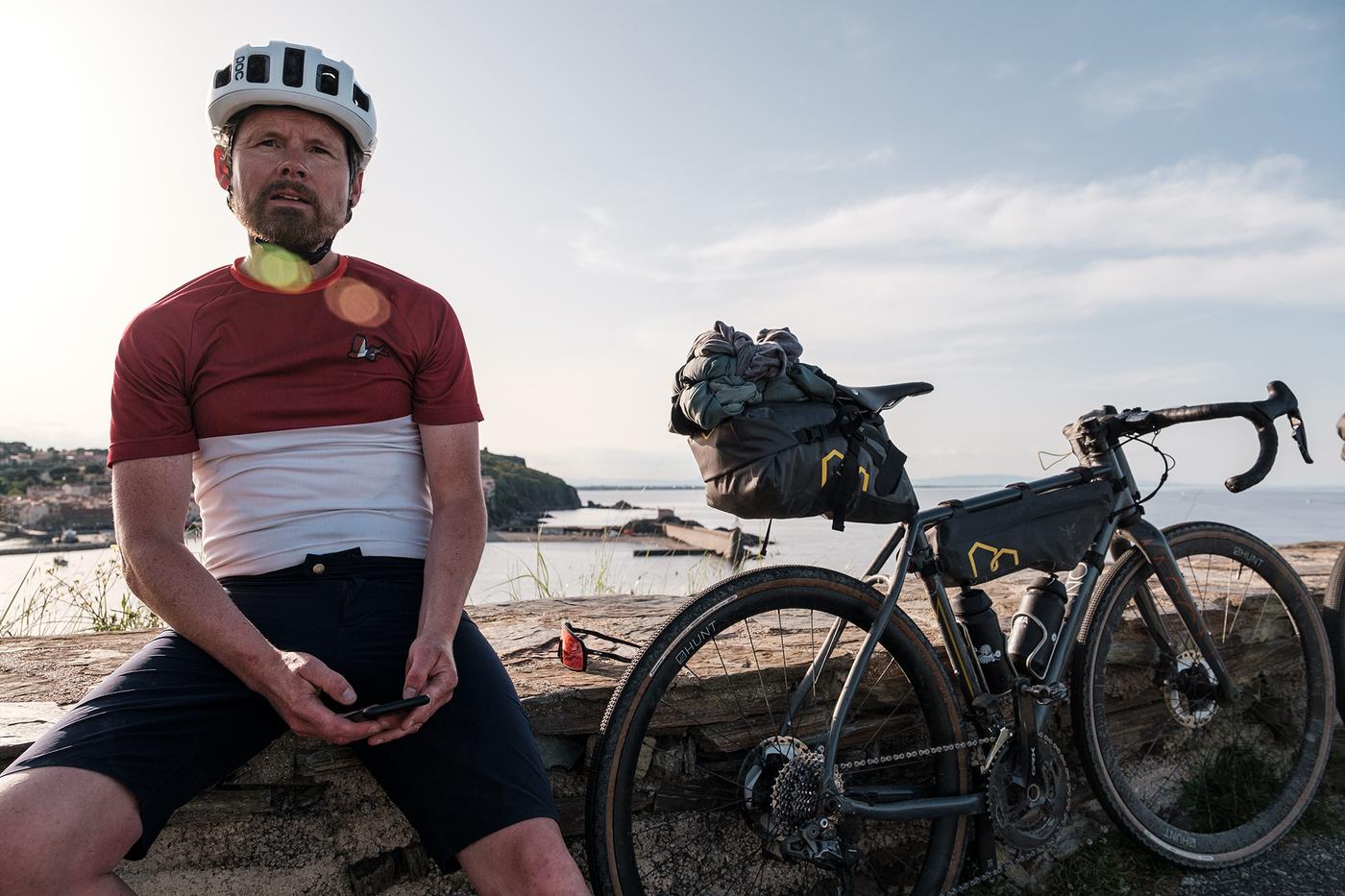 Tomás and I have known each other for nearly six years and, in that time, we have established a strong bond; a mutual trust and respect for each other. He has a genuine appreciation for the simple things in life and a heart of gold. He is one of life’s rare really good guys.

We have shared many hours together on the bike but we recently set out on our first multi-day bikepacking adventure. For the route, we focused on creating meaningful links; my home with his home, my family with his family, my region with his adopted region (Tomás now lives in Barcelona but hails from Galicia). The ride would link my local roads with his local roads and amongst many other important cultural touchstones, the French croissant with its Spanish equivalent (which is ENORMOUS). From the rich and fertile floodplains of the northern Ariège, we rode due south towards the Haute Pyrénées via the beautiful Route des Corniches and the frontier crossing point of the Col de Puymorens. This was by no means the best place to cross by bike but recent snowfall precluded us from passing over at the Col de Pailheres, or any off-road trails and our preferred route to Puigcerda, the first stop in Spain. 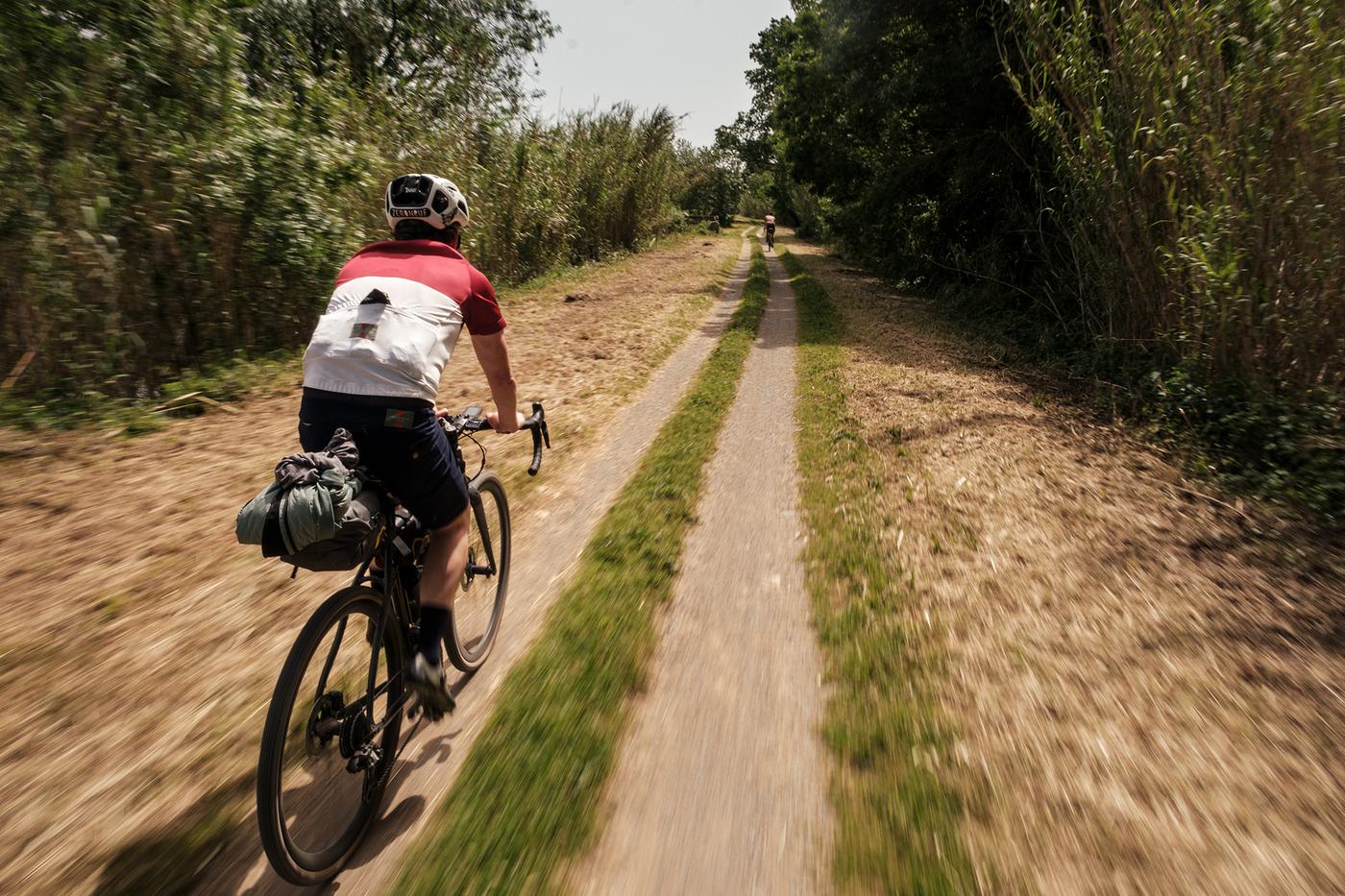 From here we climbed up towards the ski station of La Molina and beyond to the beautiful summit point of the Coll de la Creueta in Catalonia. Marmots sunbathing roadside and blissfully quiet, the views from here are incredible, layer upon layer of mountains, ridges and hills tumbling down towards the sea. The road that would take us south towards Barcelona looked like a giant scalextric track, all sweeping bends and hairpin turns. It was fast and fun. Stonechats hopping and bopping, bearded vultures soar overhead. We feel connected. 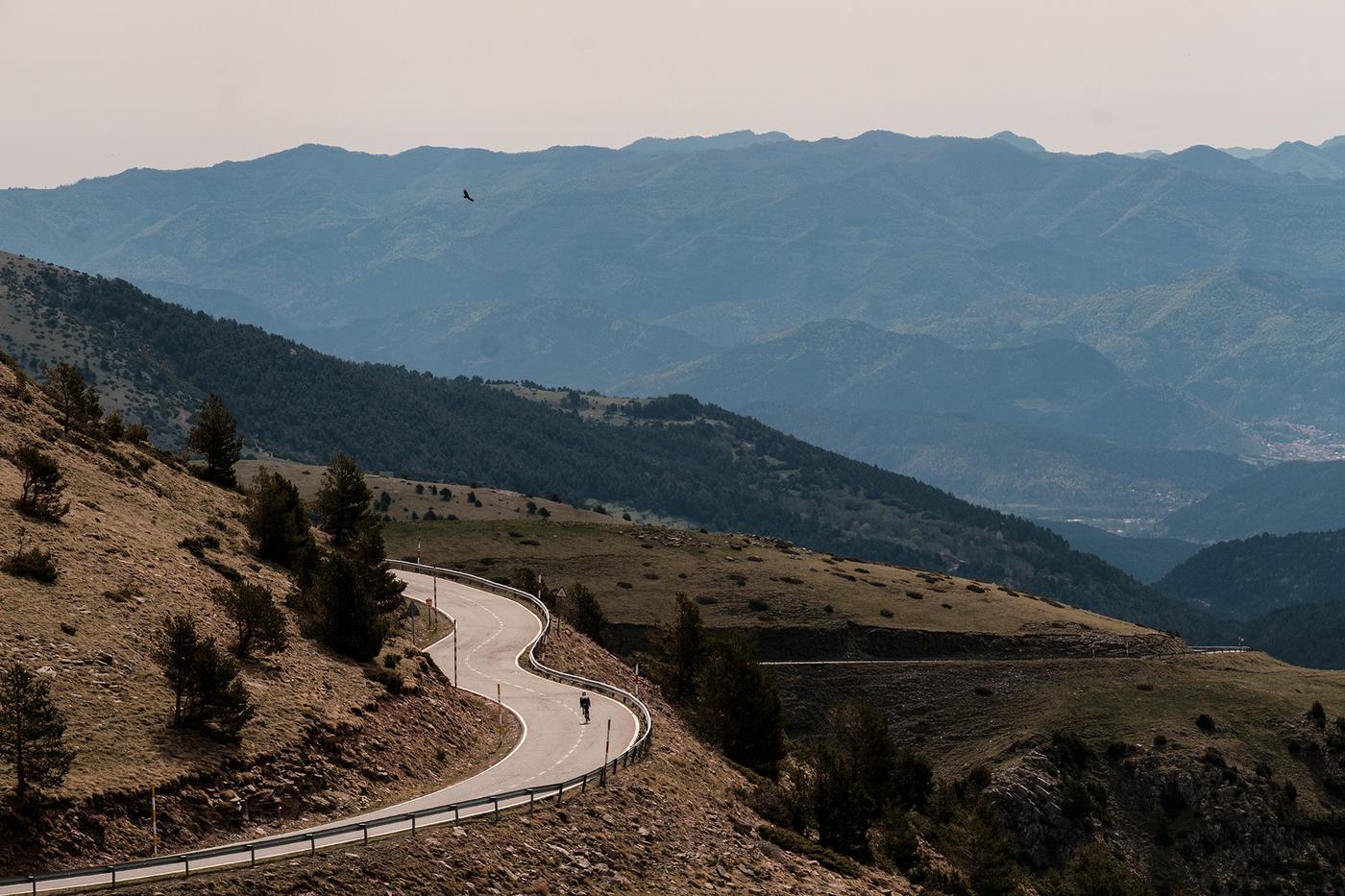 A quick ravito in the beautiful village of Castellar de N’Hug before a tough but stunning off-road section following the Estiula river and its famous seven pools: think emerald green water and cascading waterfalls, perfect for a cooling dip. We are lucky, it’s early in the season and quiet (Tomás says this area is mobbed by city folk during the summer) and our only company is birdsong and wind rippling through the trees (and the occasional groan as we meet another steep ramp).

Tomás and I both had a very busy Spring so neither of us are in the best riding form. This started to become increasingly apparent towards the end of day two when it became painfully clear that we would not be making it to Barcelona by nightfall, as planned. In better shape, we’d have happily travelled through the night but with dinner and drinks on offer at Tomas’ apartment and a train station in nearby Manresa, we agreed to take the easier option. I’d not met Tomas’ partner, Sylvia, before but just like everyone else Tomás had introduced me to over the years, she welcomed me like a member of the family and any regret for not riding further was quickly forgotten. That night, I dream of penguins. 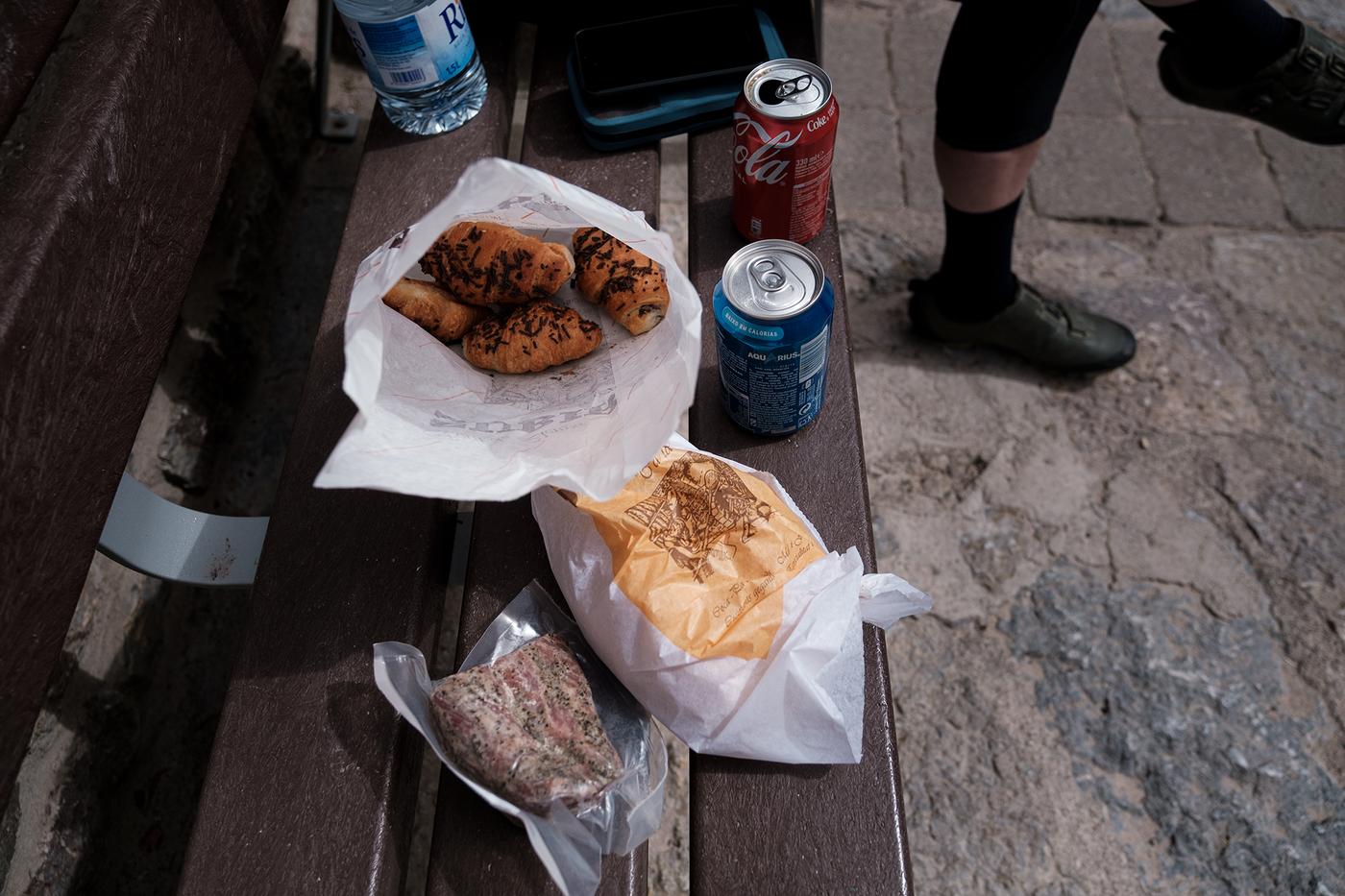 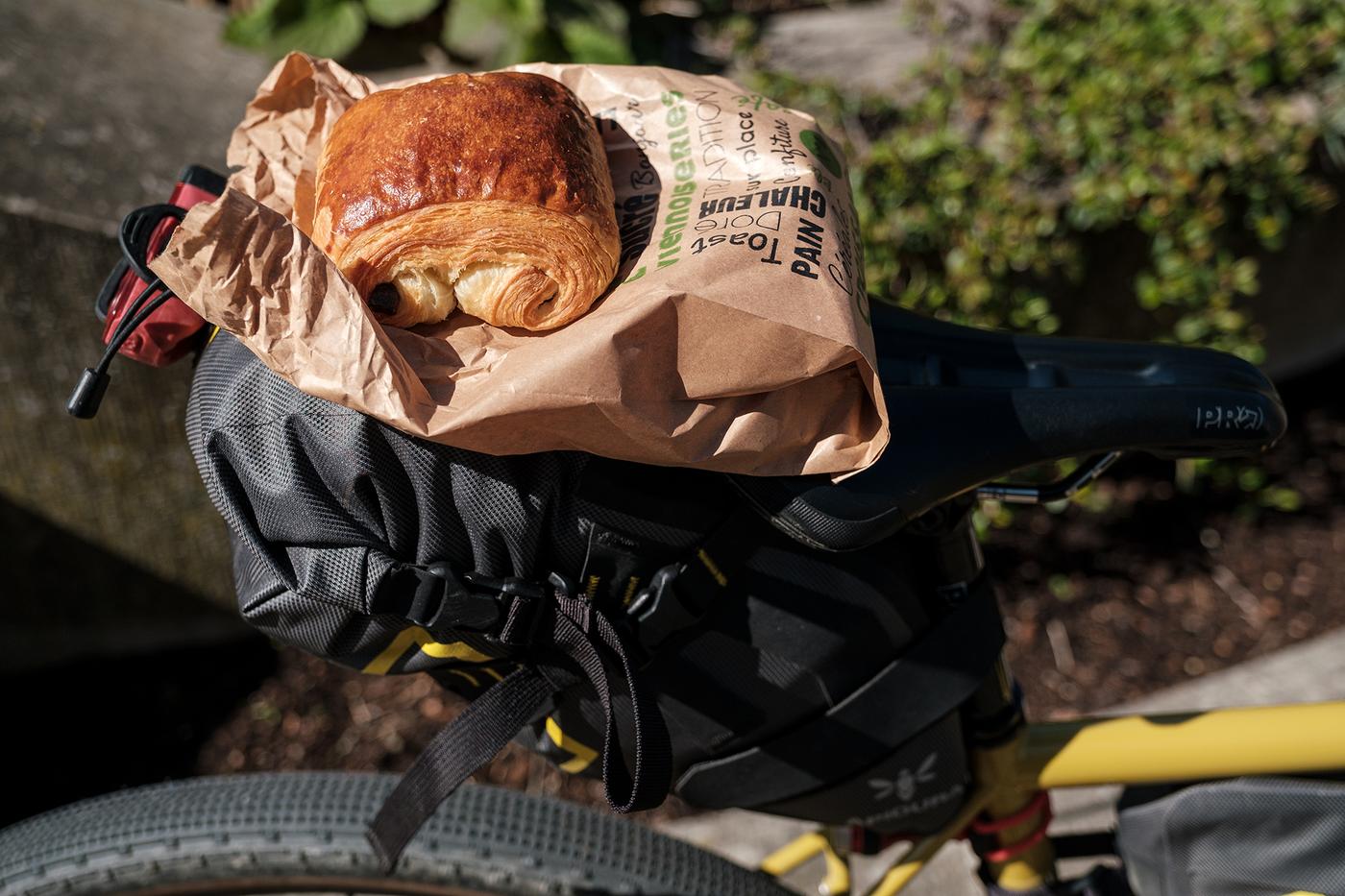 An early start and a quick coffee in Girona with super star Finley Newark, another good guy, who has a very wise head on very young shoulders. Girona is mobbed and despite an evening in Barcelona, it’s a shock to the system to see so many cyclists about. Chatting with one rider at the train station in BCN, we learned that he’d just finished the Desertus Bikus ultra. He was riding a bike from Monaco brand Stajvelo. We quickly make the connection of a mutual friend, so Stef joins us for the day and the ride back over the border to picture perfect Collioure. Les Liens. 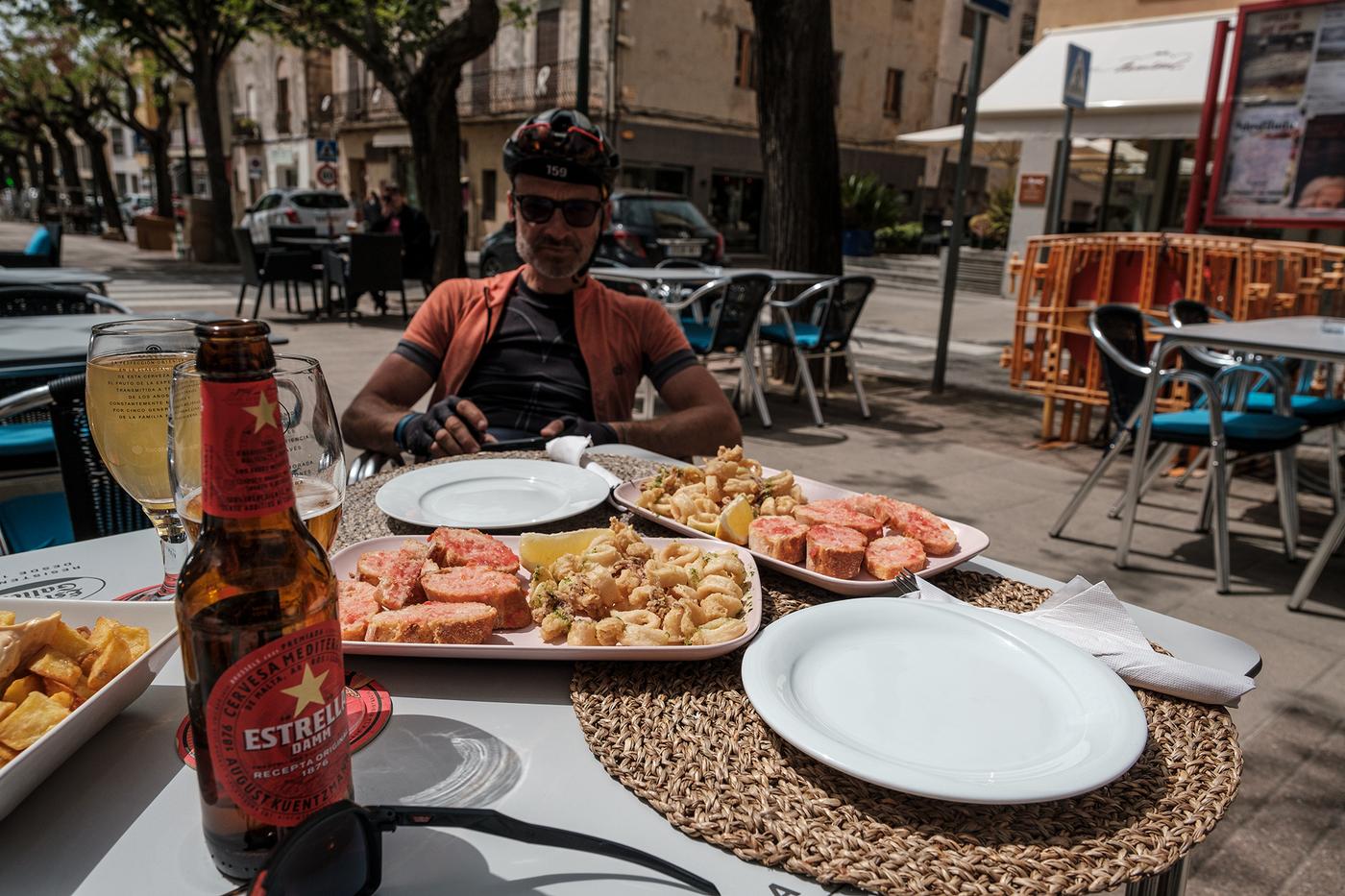 The ride north takes us into sections of Girona’s famed gravel—the roads do not disappoint. It is dry and largely flat, and when we pick up part of the following week’s Traka route, we make fast progress towards the coast and the town of L’Escala before a big, big surprise for me, the incredible ancient city of Empuries. If you have not visited this wondrous place, you need to. Incredibly, it encompasses not one, but two ancient cities; one built by the Greeks and one by the Romans. It has to be seen to be believed; it is utterly mesmerising. A Unesco world heritage site, it is counted as one of the most beautiful in the world. 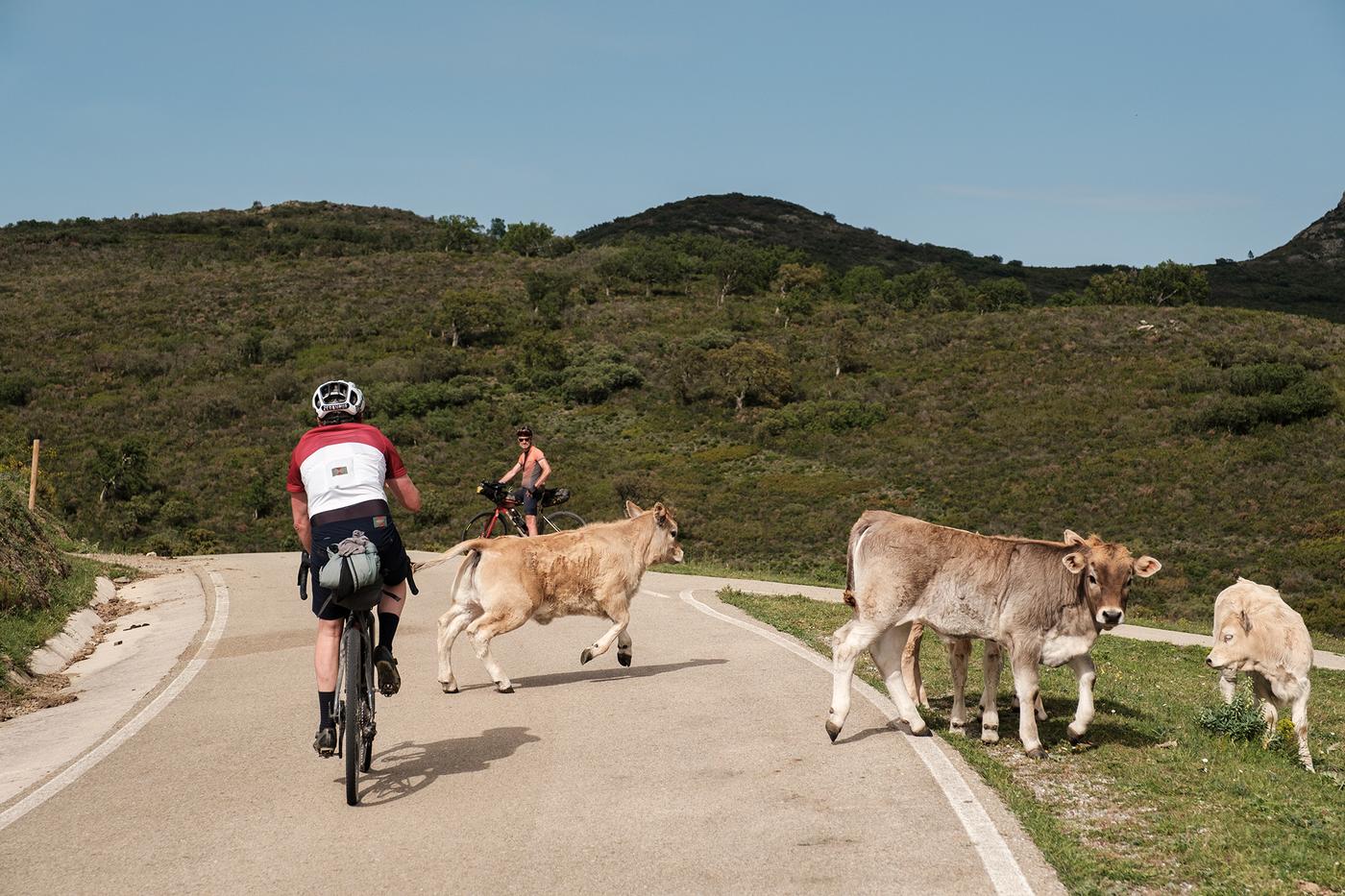 Spring flowers border the roadside, butterflies floating from one to the next, and the mood is bright as we make our way towards the Col de Banyuls in the Massif des Albères. Surprisingly, none of us have ridden the climb before and we all get to share the inaugural experience with fresh eyes. At 10km in length it would be our frontier crossing back into France and it was an absolute banger. Perfect road surface, leg-friendly gradients and the surrounding terrain awash with wild lavender, thyme, roses and countless other flowering shrubs and plants. It was full-on sensory overload (in the best way), and it felt like we were a million miles away from civilization and utterly immersed in nature. I am not sure I have ever felt so connected to the natural world. 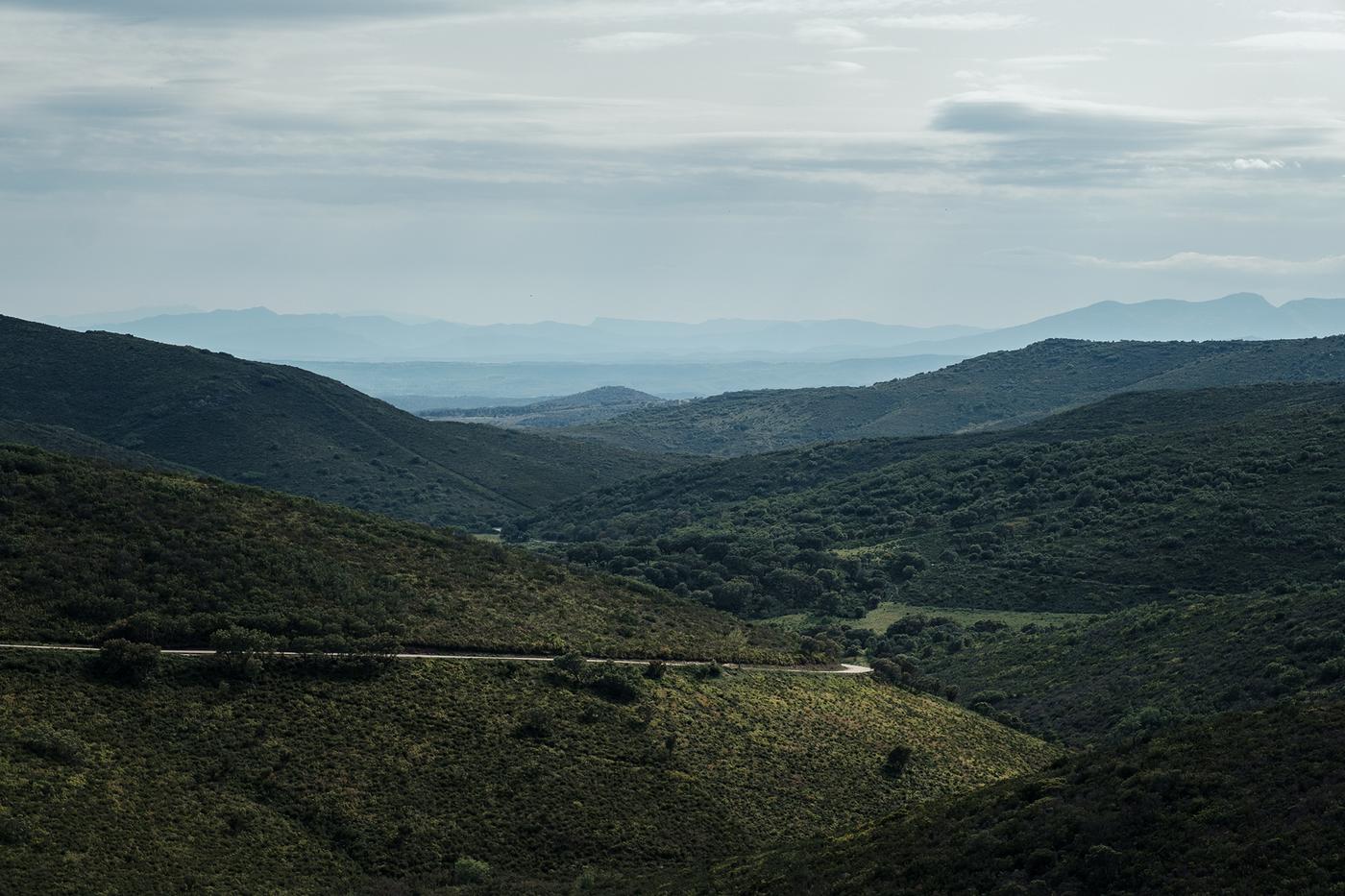 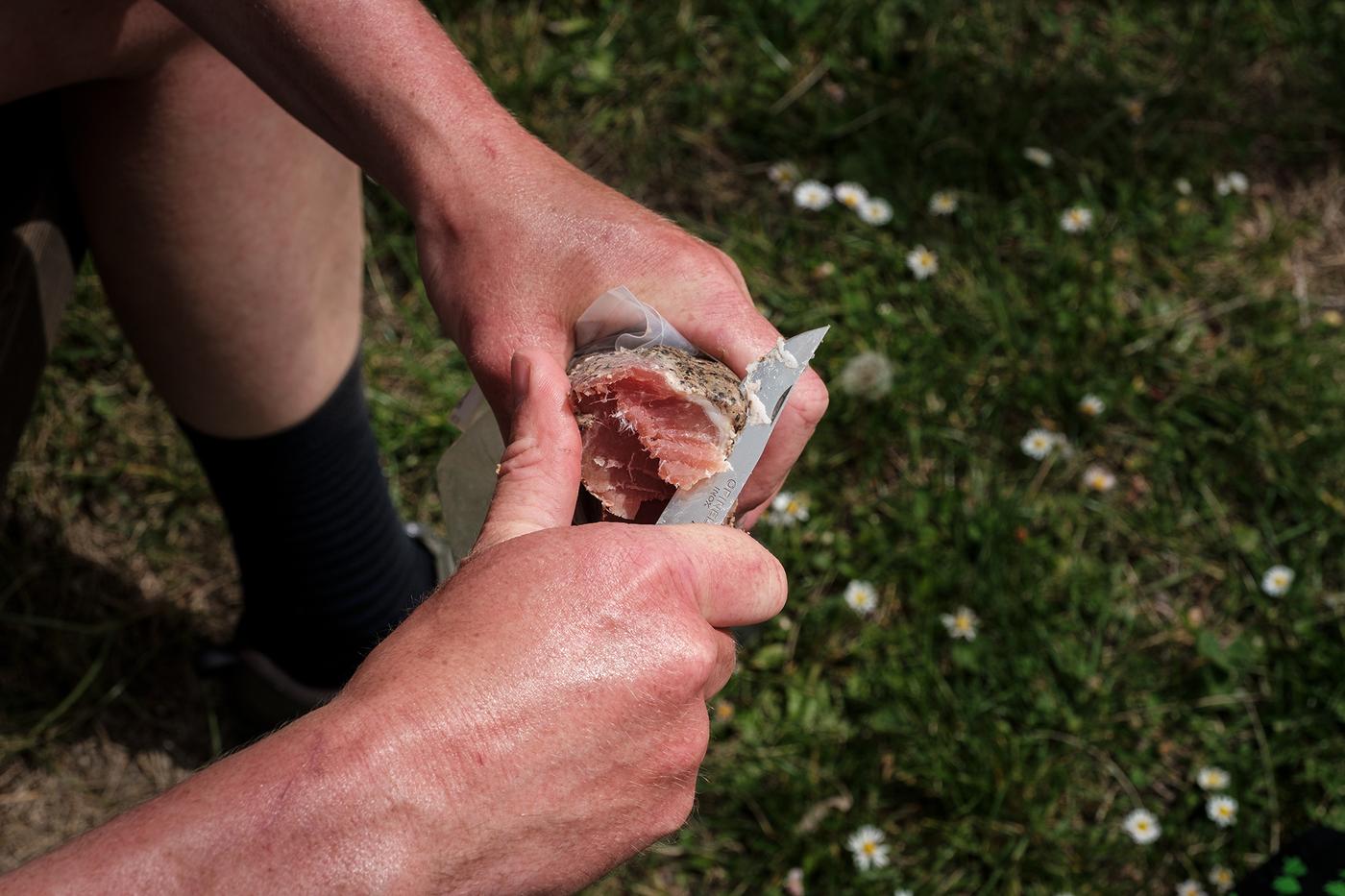 However, on reaching the summit we are quickly reminded that not everyone would have enjoyed the climb as we had. Like many of the high altitude frontier crossings between France and Spain, the Col de Banyuls acted as a route to freedom for the persecuted during WWII and a plaque honors those who made the ultimate sacrifice whilst helping others flee. Never forget.

Out of season, Coulliore is a gem (but be warned that in high summer it is crazy busy!); it’s a gorgeous seaside village nestled on the Côte Vermeille overlooked by the famous Notre Dames des Anges church and Royal Chateau. It’s also a great wine region and we sit in the old town for a meal of delicious seafood, spending the night here before starting the final day’s ride back to Zero Neuf. Well, the plan was to ride but we’re tired and decided to ride the short 35km to Perpignan and pick up a train which should take us to Castelnaudary, itself a short 40km back to the house. 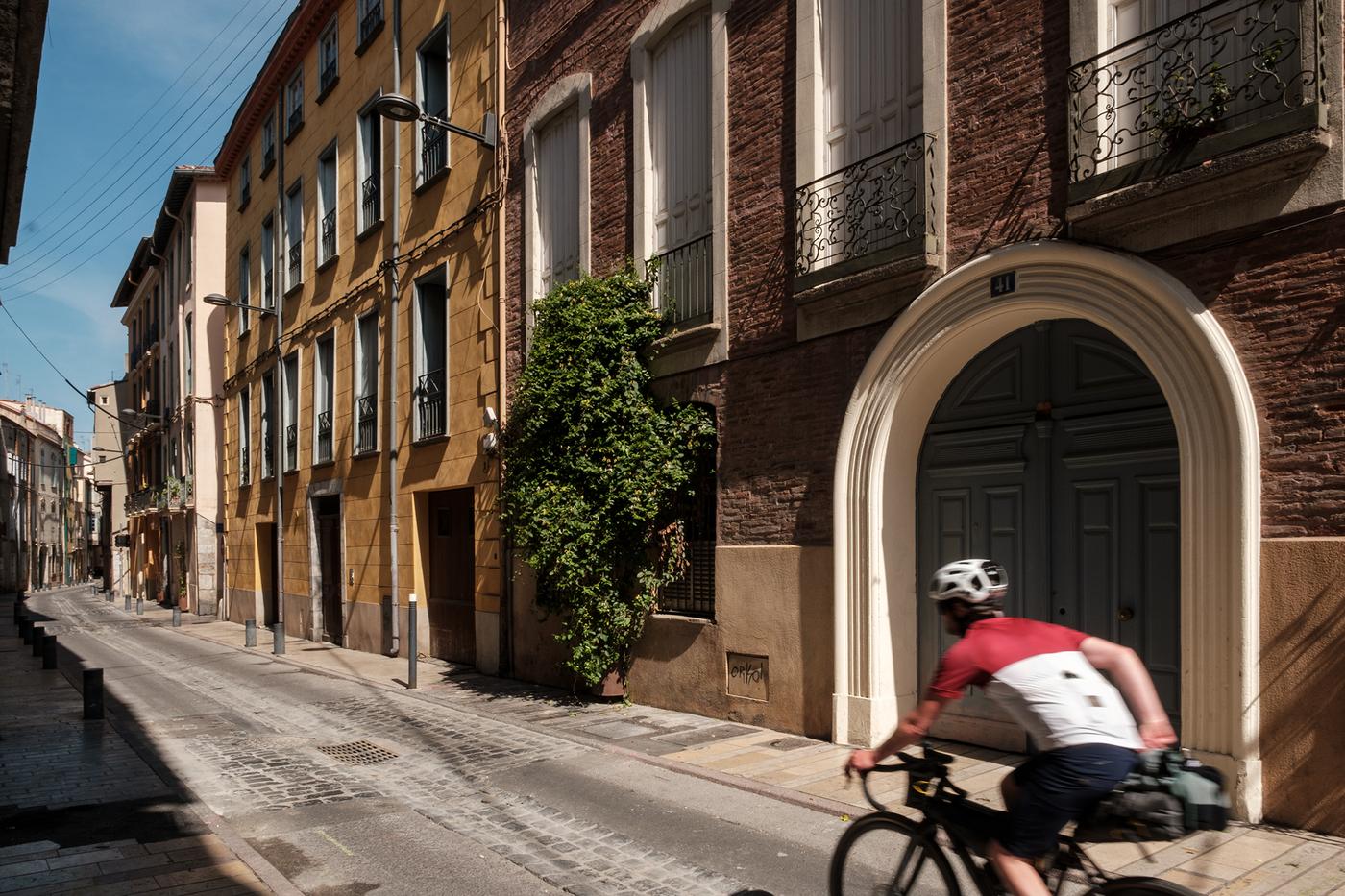 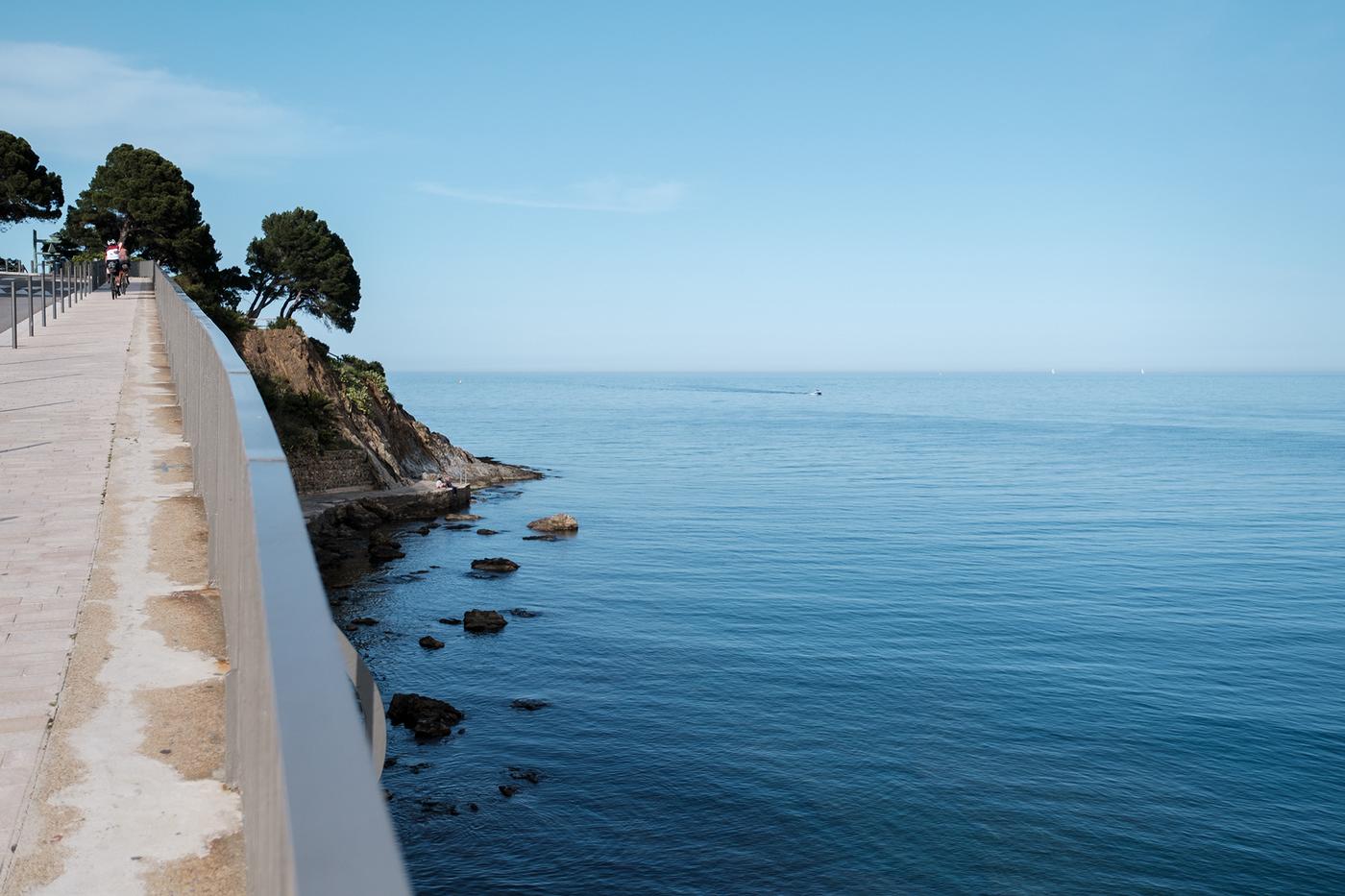 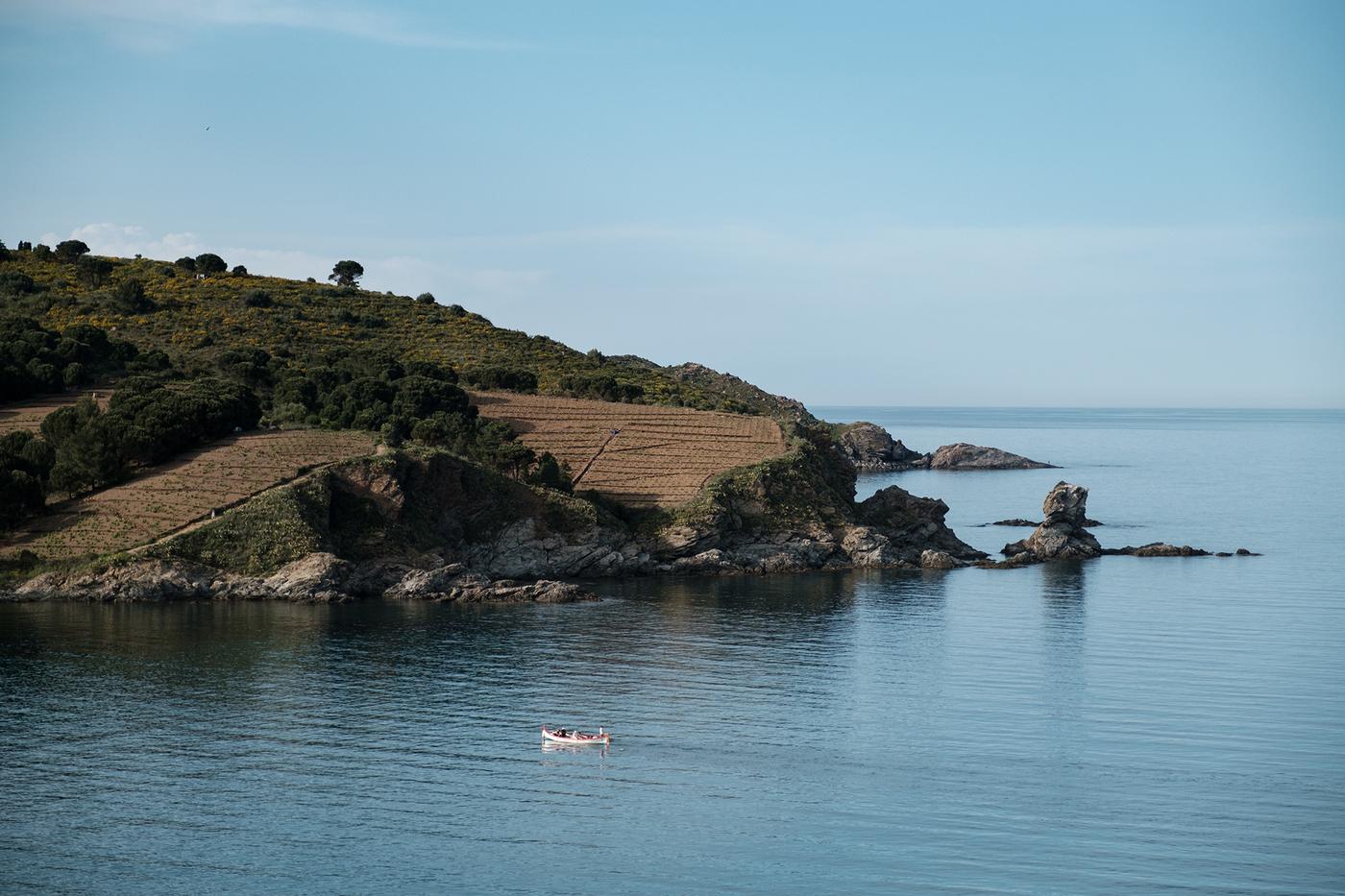 After a brief and rather embarrassing stop at a local pump track, we’re on a train flying along the coast—flamingos and wading birds aplenty as the tracks flirt with the seashore. We make it to our destination, the ride from Castel to Zero Neuf is through some of the region’s finest rolling countryside. Immersed in nature, you feel no stress. When the trip is over, I take some time to reflect before concluding that when we slow down and listen, afford ourselves time and space, find a genuine appreciation for our surroundings, and when we live in the here and now, we can feel linked to everyone and everything; it is like an analogue antidote to a venomous digital world.