Blurred lines seem to be all the rage in the bike industry these days, and with every season, a new category seems to evolve. Gravel, Adventure, Downcountry, trail…yadda yadda. While this constant categorization is overwhelming, it also means that bikes are simply getting better. Then over here in the corner, sipping scotch while the kids play beer pong and try to “find themselves”, is the humble hardtail MTB. This has been elaborated on to a great extent on this site, so I’ll spare you the poetic wax. Sure, a few folks out there are pushing the boundaries of what to expect with hardtail geometry, with huge forks and headtube angles more suited for plowing a field than climbing a fire road, but for the most part, we can look to the hardtail for consistency.

So, what happens when a company known for rowdiness and generally not caring too much about the status quo takes their tried and true hardtail model and releases a version with boxes checked for the modern consumer (read: big tires and carbon?) That’s what I wanted to find out by spending a few months with the Big Honzo CR/DL. Upon first looking at this bike, all built up and waiting to be dirty, I noticed its curves. It’s clear upon first glance that Kona wanted to keep the Honzo true to its roots: a fast and rowdy hardtail that doesn’t make compromises for a ride quality that few other hardtails have become as (in)famous for. The striking angles and super low standover resemble the steel predecessor’s angles, albeit notably swoopier. It’s almost like Antoni Gaudi got his hands on a bike design and took his liberties.

Now, while swooping lines, a long top tube (618mm TT, 450mm reach) slackish (67.5°) front end, 75°seat tube, and long wheelbase (1173mm) sound inherently “modern”, I did take some issue with the lack of space in the front triangle. This is definitely me being a nitpicky bikepacker, but I can fit almost twice as much in a frame bag on a size Small Salsa Woodsmoke compared to the size Med Honzo I’m testing. (I’ll be making a lot of comparisons to the Woodsmoke throughout this review, as it’s the only other modern carbon hardtail I’ve spent much time on.) The lack of a downtube bottle mount also makes the statement that this bike is here to party, not grind 4×4 track for days on end. Though nerds like me love high volume triangles, I really stopped caring about this once I felt just how much fun the bike is. The low standover means that there’s alot of room to move the bike around underneath you and makes cornering a dream. I have a tendency to bang my knees on the top tube from time to time when really committing into a leaned out corner or jibbing off a root, and that didn’t happen once. I can’t say that about the Woodsmoke. Let’s talk about the backside of this bike. Long and low are all the rage these days and the Big Honzo is no different. The bottom bracket sits really, really low on this bike (BB drop at 50mm, and BB height at 310mm). I did most of my testing in Prescott, Tucson and Sedona. These are places with a lot of pedaling and a lot of rocks. I had more pedal strike on this bike than my Knolly, which is saying something. Now, this is also a matter of terrain and riding style. Once I learned by experience just how low this bike is, I changed my riding style a bit. Luckily, the geometry lends itself to really efficient pumping, so as I learned I was able to mitigate the pedal strike. Still, going forward, I would most likely put shorter cranks on it. The times I felt spooked by this was outweighed by how confident I felt on steep, loose chutes in the Bradshaws or slickrock rolls in Sedona. Riding the Jem trail in southern Utah, I only noticed how nice the low center of gravity was for sinking into and popping out of grade inversions. It’s all a give and take. The chainstays on this bike are not absurdly short at 430mm, nor do they pass the hotdog test with a 27.5×2.8 tire in there. This might freak you out a bit—don’t let that happen. The longer wheelbase meant plenty of stability and regardless of what people will tell you, I could still snap the back end of this bike around just fine. Something I would’ve liked to see on this bike is a movable dropout to change the wheelbase a bit and run it SS out of the box but again, that’s the versatility nerd in me. Little details like the flared seatstays and integrated chainstay protector made me smile as well. I felt stable yet still able to play around without worry, and the overall ride felt soft compared to the Woodsmoke, maybe due in part to the damping and vertical compliance offered by the extra seatstay material. I’m no engineer but I know what my butt felt, ok? 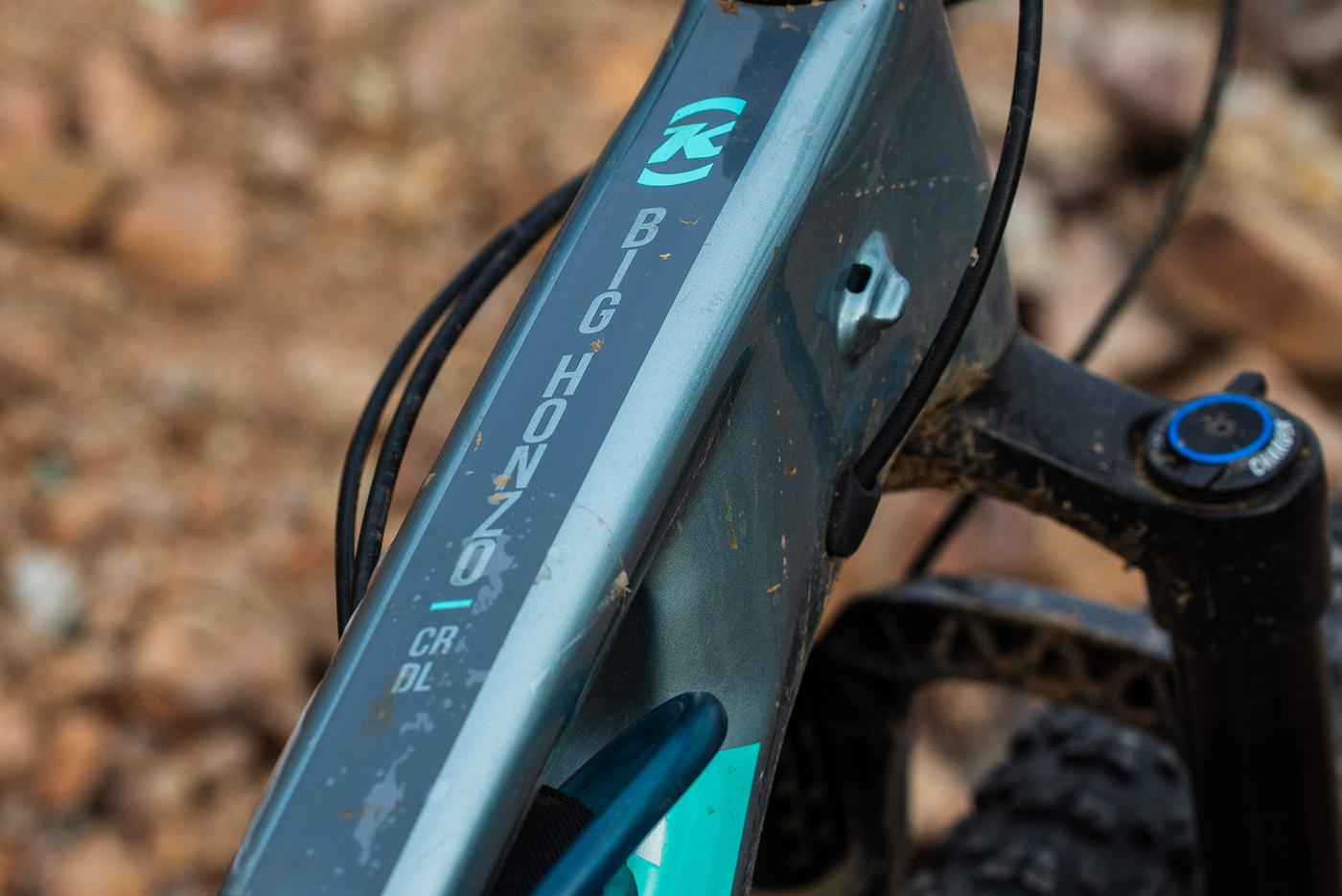 The frame itself is made of Kona’s trail carbon, which is, you guessed it, a midway point between their XC and DH layups. Again, I’m no engineer, but I will say that I never felt like I was going to break this bike, which is relieving considering the number of steel hardtails I have broken. The bottom bracket is press fit, which meant the dropper installation was more tedious than I would’ve liked, but that’s just me. It also means a bit less versatility for remote tours where a failing BB could be replaced more easily with a threaded shell, but I don’t think this bike was built to be a backcountry world touring rig. It lets the cranks move and doesn’t creak, so I’m not mad. The cable routing is your choice, and I opted for internal. At some point I either lost or destroyed the entry port guide which meant occasional dropper hose rattles, but I lived with that and it was my fault. 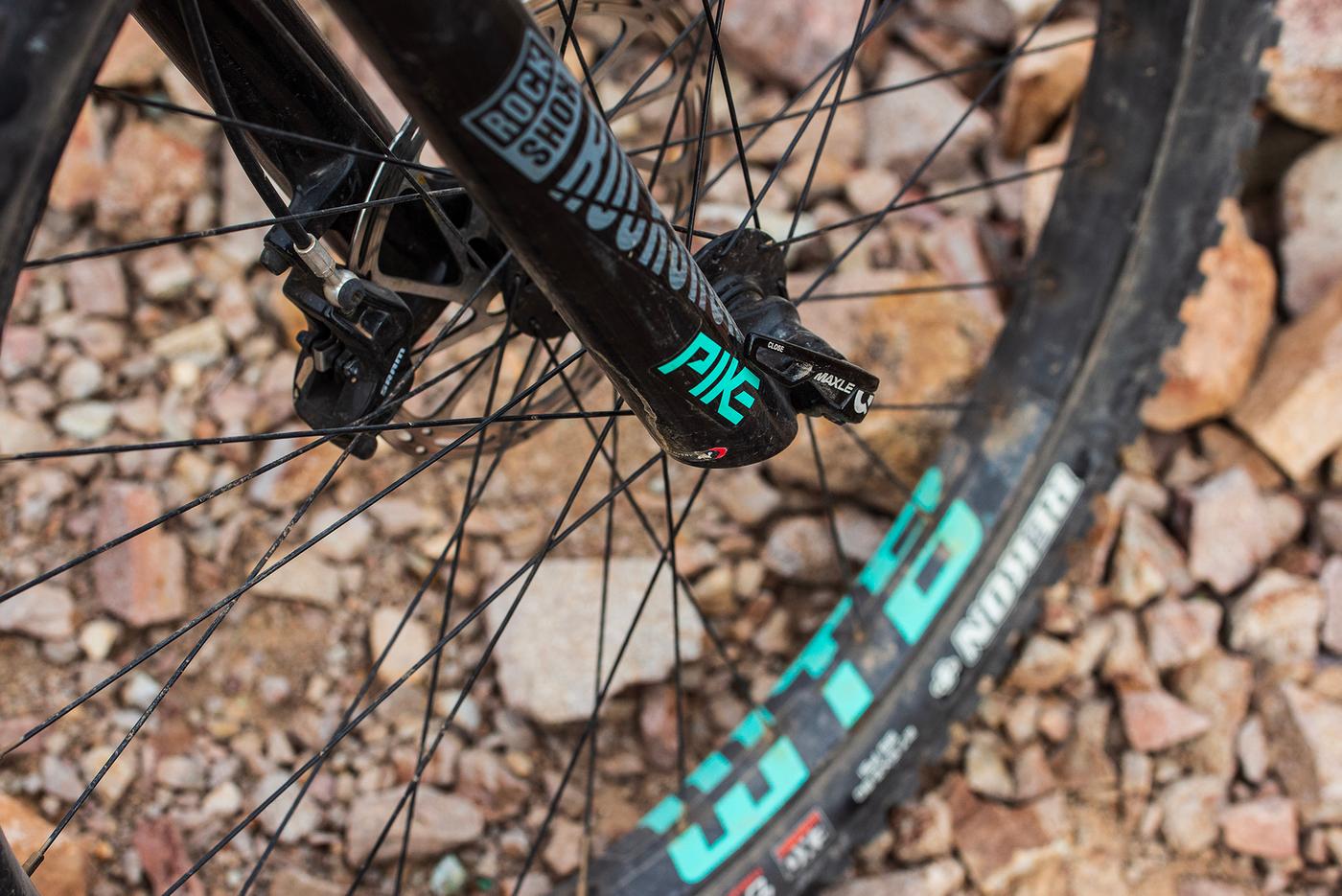 The build on this bike is going to be love-hate for folks out there. I’m realizing that I’m pretty picky, even though I don’t want to be. Most of my time is spent on Fox suspension and XT brakes. That is my go to. The Honzo came stocked with a 130mm Pike and Guide R brakes. Did I miss the grabbieness™ of an XT and the adjustability of a Fox 34? Yep. Did I ever lose braking power or have a harsh bottom out? Nope. In the end, it’s up to personal preference, and neither Fox, Shimano, or SRAM/RockShox are making terrible components right now. I loved the range of the GX Eagle drivetrain, and didn’t feel the need for anything flashier, especially on a bike that begs to be abused. Even though I don’t want to admit it, the Reverb dropper worked flawlessly, although I would’ve preferred a lever as opposed to the plunger actuator. I prefer my droppers with cables and levers but just like the press fit BB, this system worked just fine.

The cockpit is a blend of a Kona branded and color matched WTB saddle and Kona bars/stem. Nothing too flashy, but comfortable and functional, with a nice little 30th-anniversary stem cap.

Kona was good enough to send over their massive, blue anodized Wah Wah pedals. As someone who really loves platform pedals for the control and comfort they offer, I can say these are the best pedals I’ve used. There’s something comforting about looking down and seeing blue real estate beyond the end of my size 7 shoes, and knowing that regardless of my poor decision making, getting planted won’t be a problem. The scars on my shin are worth that confidence. 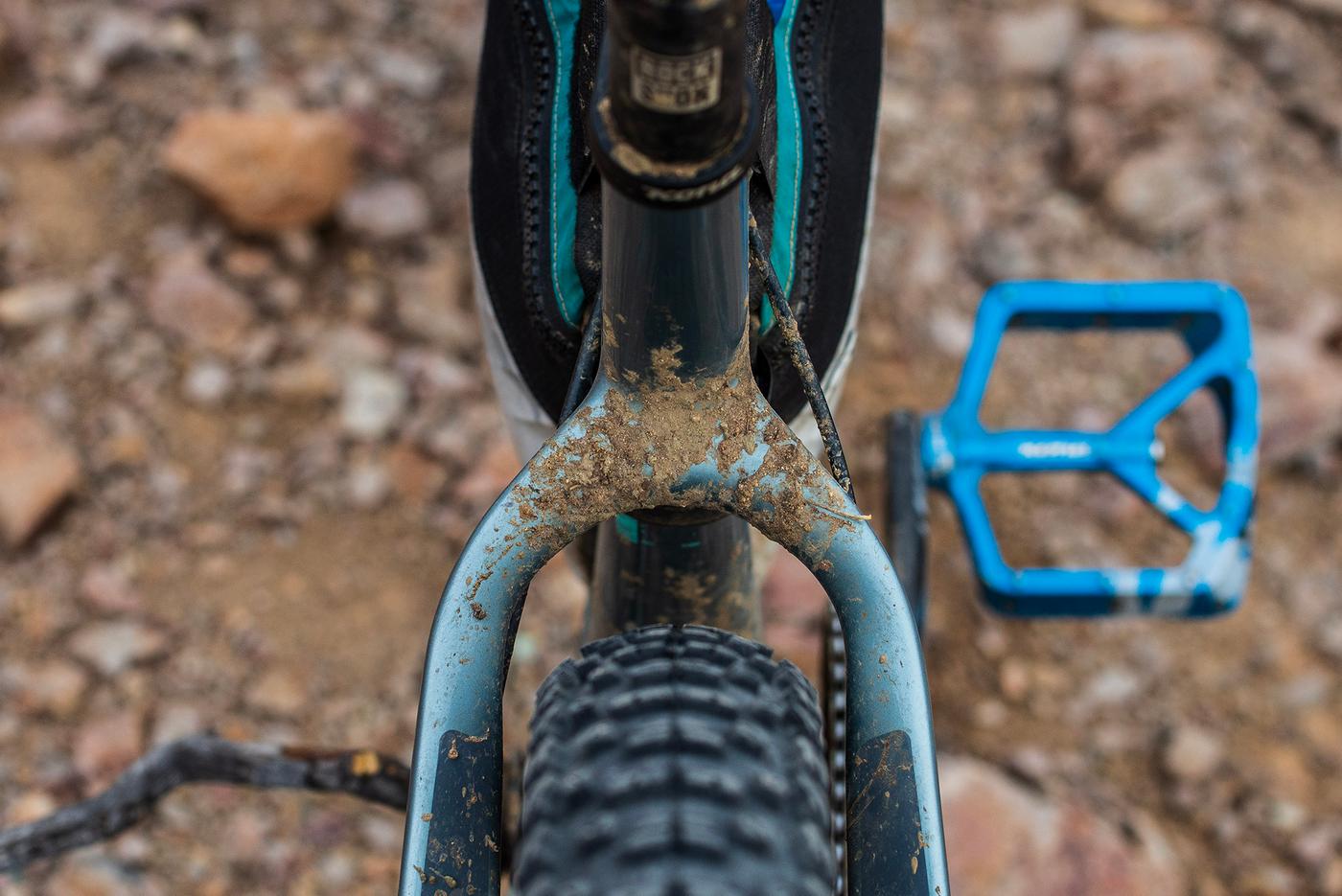 Tires. It seems like we spend entire brewery sessions talking about tires, and I’m guilty of that too. Now, I know everyone is stoked on plus-sized tires and I’ve spent more time on them in the last few years than something more “traditional”. But I’ve got to say, they aren’t perfect. I have a tendency to charge through rock gardens and I’ve found that in Arizona, that means you WILL get a flat unless you are running high pressure or a tire insert. The same is said for the Big Honzo and the 2.8 Rekons I was running. When a bike inspires the confidence of a full sus without the rear pivots to back it up, you’re going to tear rubber. I managed to only get one flat during this review (those of you who know me won’t believe that) but that’s because I was running high pressure in the back. Doing that sort of defeats the supposed benefits of high volume tires and though I’m sure more diligent pressure checking or an insert could help, I’m a set and forget kind of guy. I’m sure I’ll get an earful of dissent in the comments but I simply don’t think plus-sized tires, aggressive riding, and rocky terrain are the best of friends. But whatever. Take a tube or get some glitter for your sealant or an insert, and go ride your bike and stop thinking about tires. I know I need to. 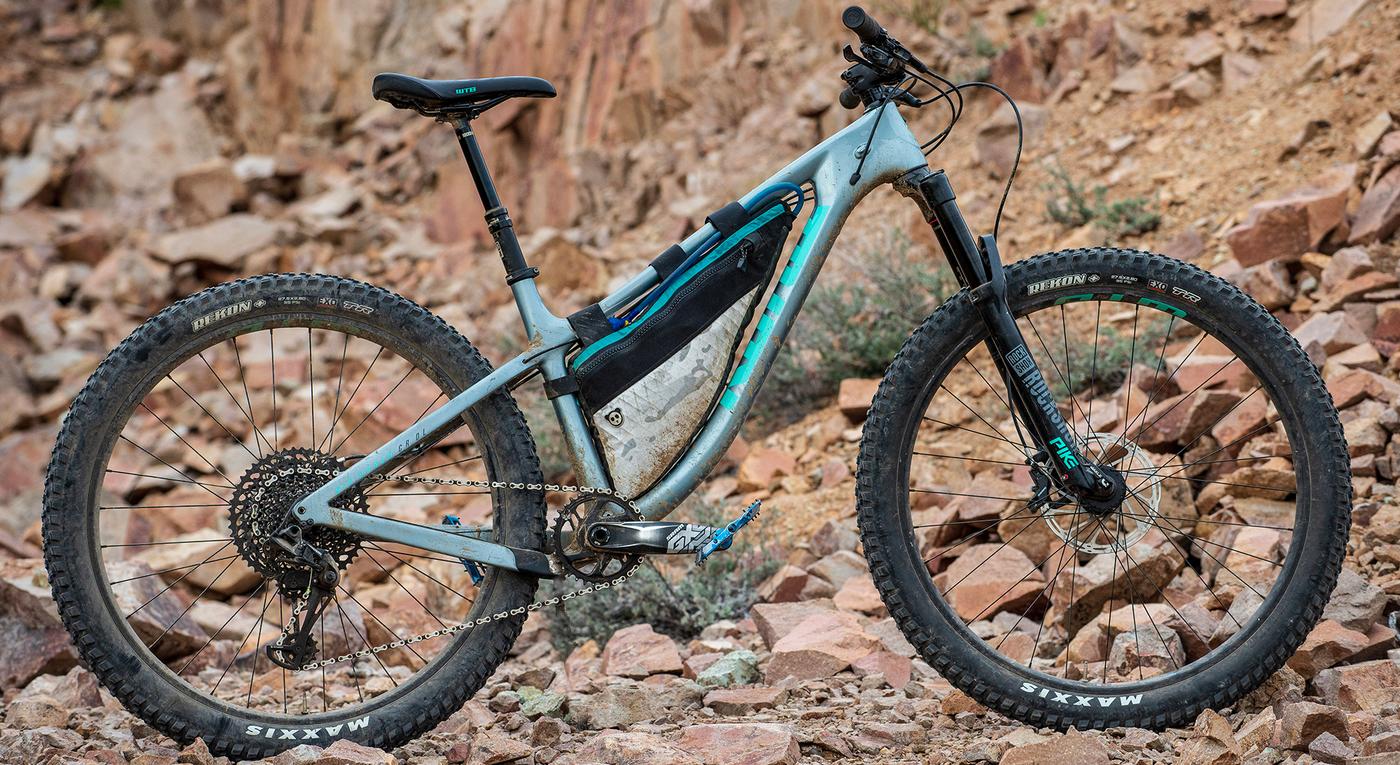 A few years ago if you would’ve asked me what sort of MTB I wanted, “carbon hardtail” would’ve been at the bottom of my list. The Big Honzo CR/DL has changed that mentality 100%. This bike has been so much fun that I haven’t touched my full suspension over the course of this review, save for the Grafton DH near St. George, UT. There hasn’t been a single trail that I wished for more bike on when riding the Honzo and when coming from months spent on a 150mm trail bike, that’s saying something. The fact that I can hop on this thing and just ride anything that comes to mind knowing that the Rogue Panda frame bag has all of my niceties in it has meant that I ride more, which is what we all want.

I set out on this review thinking that this would be the ultimate bikepacker/trail ripper blend. I can say that the Big Honzo doesn’t scream bikepacking and it could definitely be more friendly to the mechanical fiddler, but that doesn’t mean it’s not an absolute joy to ride. And honestly, with enough creativity and straps, anything can be a bikepacking bike. The Honzo did handle just fine with bags on, even though that experience was brief. The mechanical nitpicks can be avoided by building the frame up, with shorter cranks and an eccentric BB. After the first few rides, I abandoned my pre-conceptions of what I wanted this review to look at and just let the bike speak for itself. This bike wants to go fast, have fun, and not be put into any specific category other than “mountain bike”. Would I recommend it to a hardcore DH rider or someone looking to set an FKT on the Divide or AZT? Nah. Would I recommend it to a friend who wanted a bike that they can do almost anything on and have a blast while doing it? Absolutely. The Big Honzo reminded me why I love hardtails so much. It’s like a fried egg. It’s not going to be a super unique culinary masterpiece, but it’s going to taste good every day, and the approachability, dependability, and satisfaction are why it’s a staple.