Readers of this site might be familiar with Retrotec but what about the brand’s Genesis, or its roots, rather? Bob Seals started Retrotec in the late 1980s after making the Cool Tool. Yet many aren’t aware of the brand’s most unique creation: the Cool Toob Human Powered Dirt Craft Cycle. Read on below for an in-depth look! 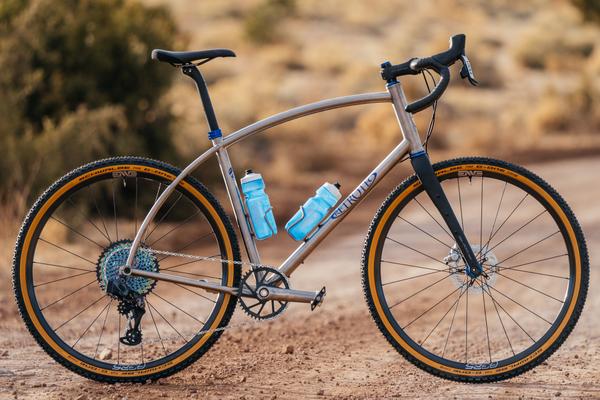 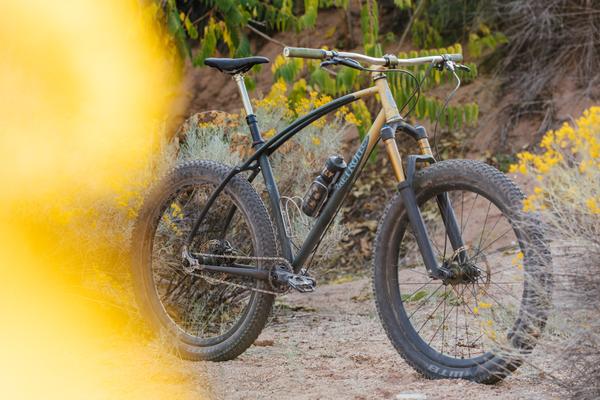 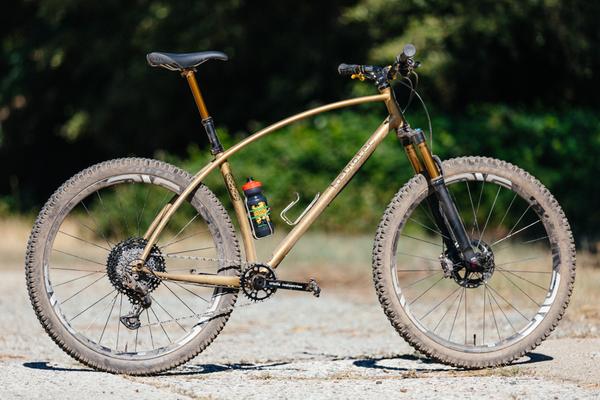 In the late 80s and early 90s, mountain biking was hitting its stride. This period was marked by explosive growth and innovation. Mountain bike racing was all the rage; bright, colorful paint jobs were the norm, and no frame design was too wild. The fun was at the sports center. Nothing embodies that more than Bob Seals and Retrotec. 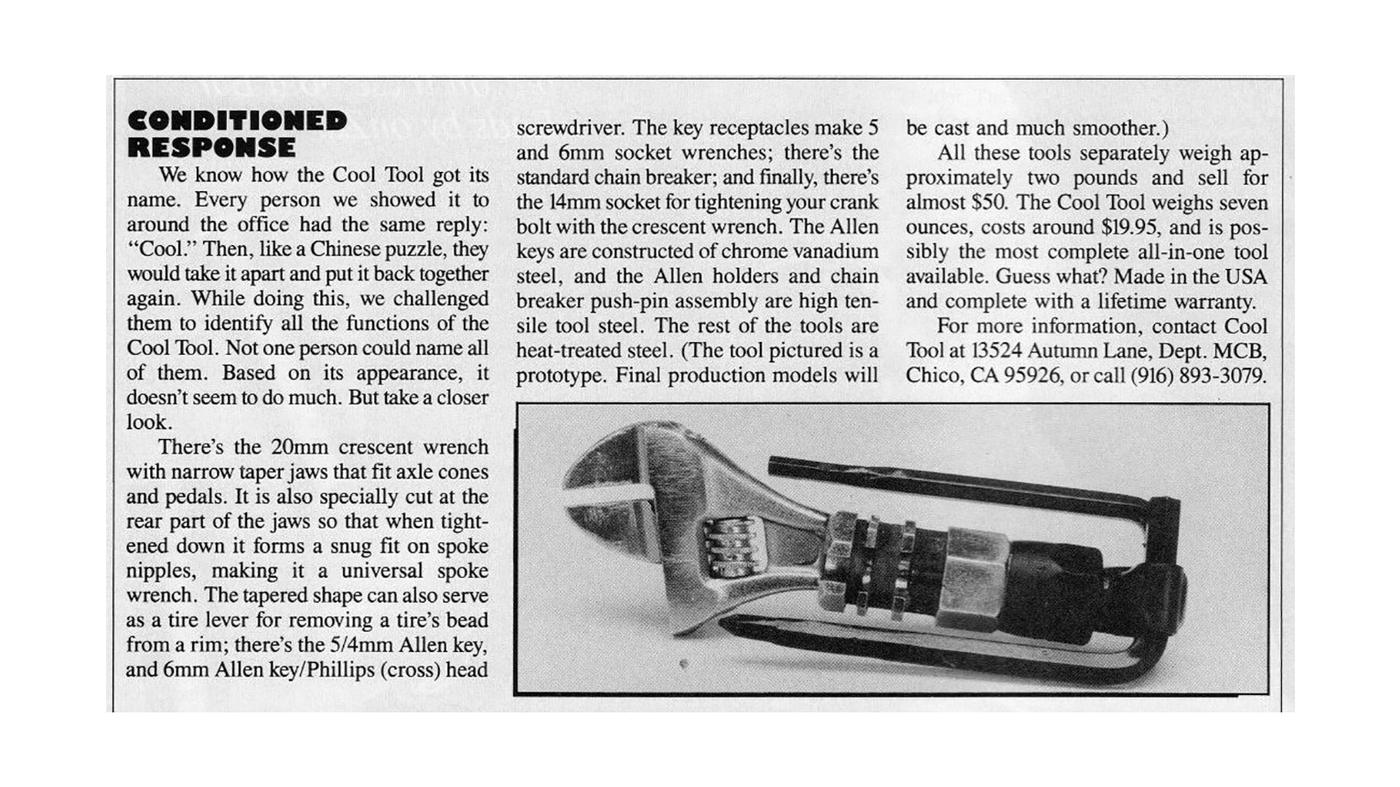 Bob Seals was the inventor of the Cool Tool, a multi-function bike tool for trail-side repairs. While the Cool Tool saw a fair amount of success, Seals would eventually turn his focus to frame building. He was known for showing up to races in an old yellow school bus and pulling up to the start line in nothing more than cowboy boots and a speedo (or tutu, or dress, maybe a tie). Never one to take things too seriously, his curved framed Retrotec bikes harkened back to when we were kids, and a Schwinn beach cruiser meant absolute freedom… and fun. 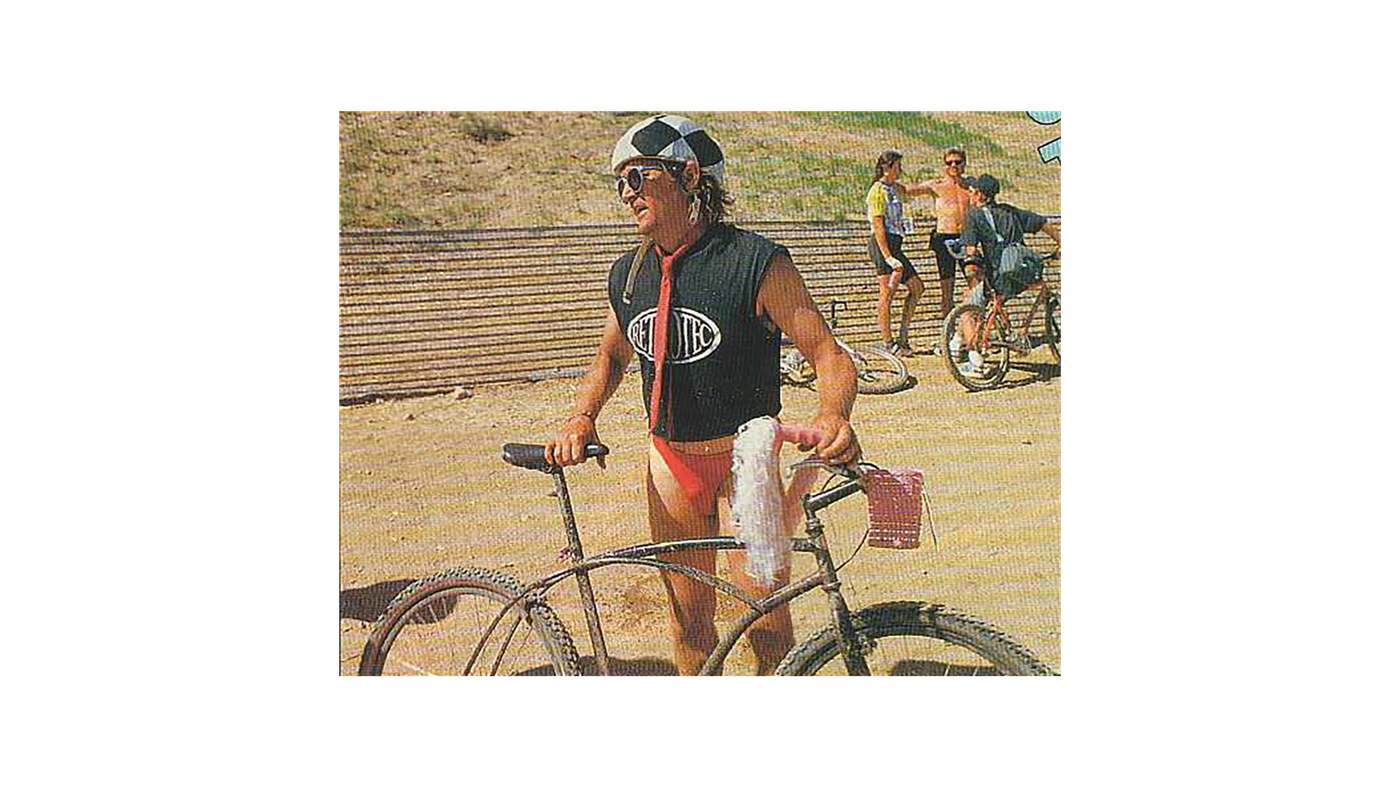 Retrotec frames are a blend of whimsical nostalgia and modern technology. And while the more commonly known cruiser style frames pulled from (a then) 60-year-old design, Retrotec set out to push the envelope with another offering. Enter the Retrotec Cool Toob Human Powered Dirt Craft Bicycle. It’s a lot to say. And the bike is a lot to look at. 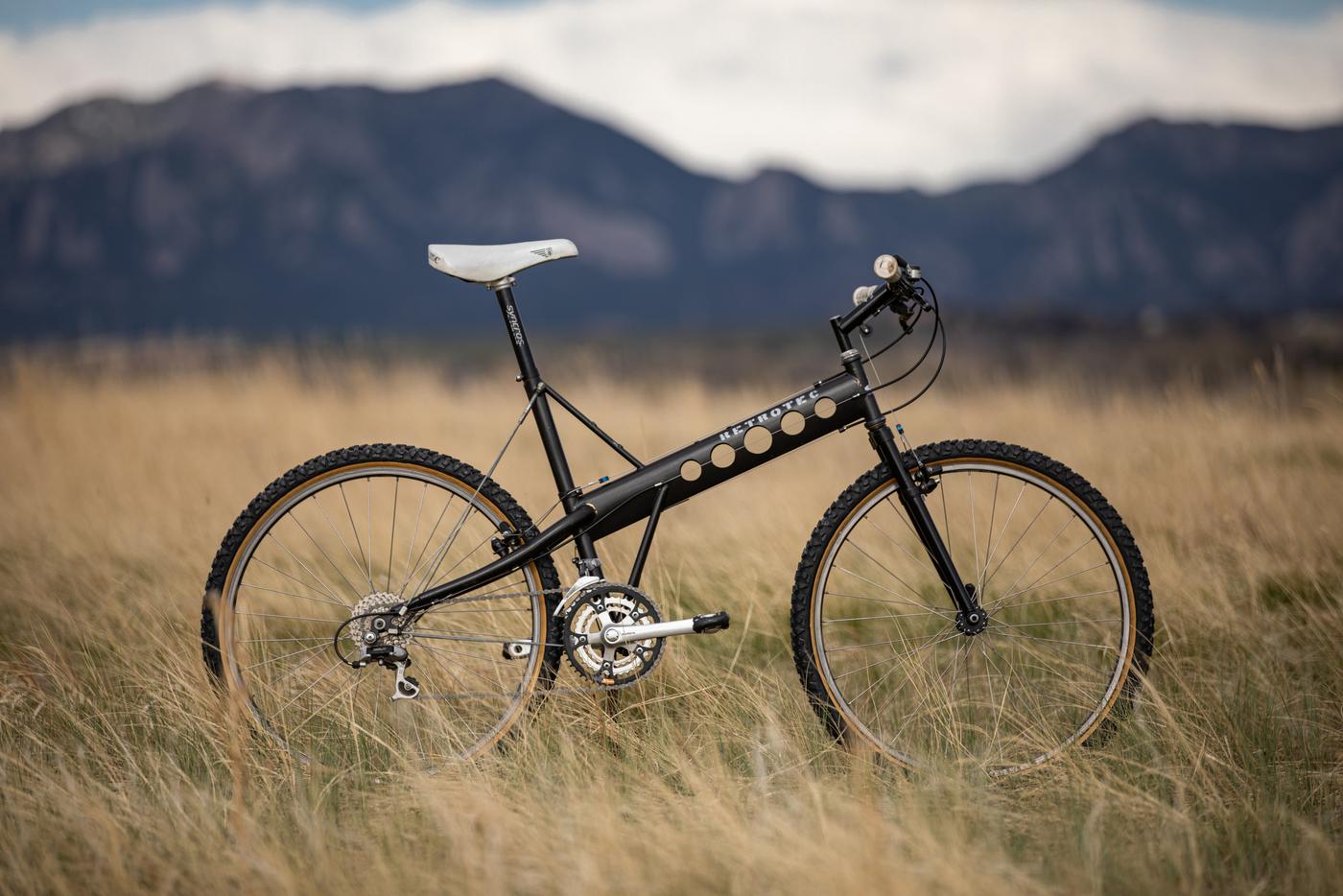 Where to start? Few bikes spark up a conversation like the Dirt Craft Cycle. With reportedly only about 50 ever made, if you ever come across one on the trail, you won’t soon forget it. The first thing you’ll notice is the 4130 Chromoly aircraft monotube. Those holes drilled through it are for weight savings! No two frames have the same number of holes, hole patterns, or hole sizes. 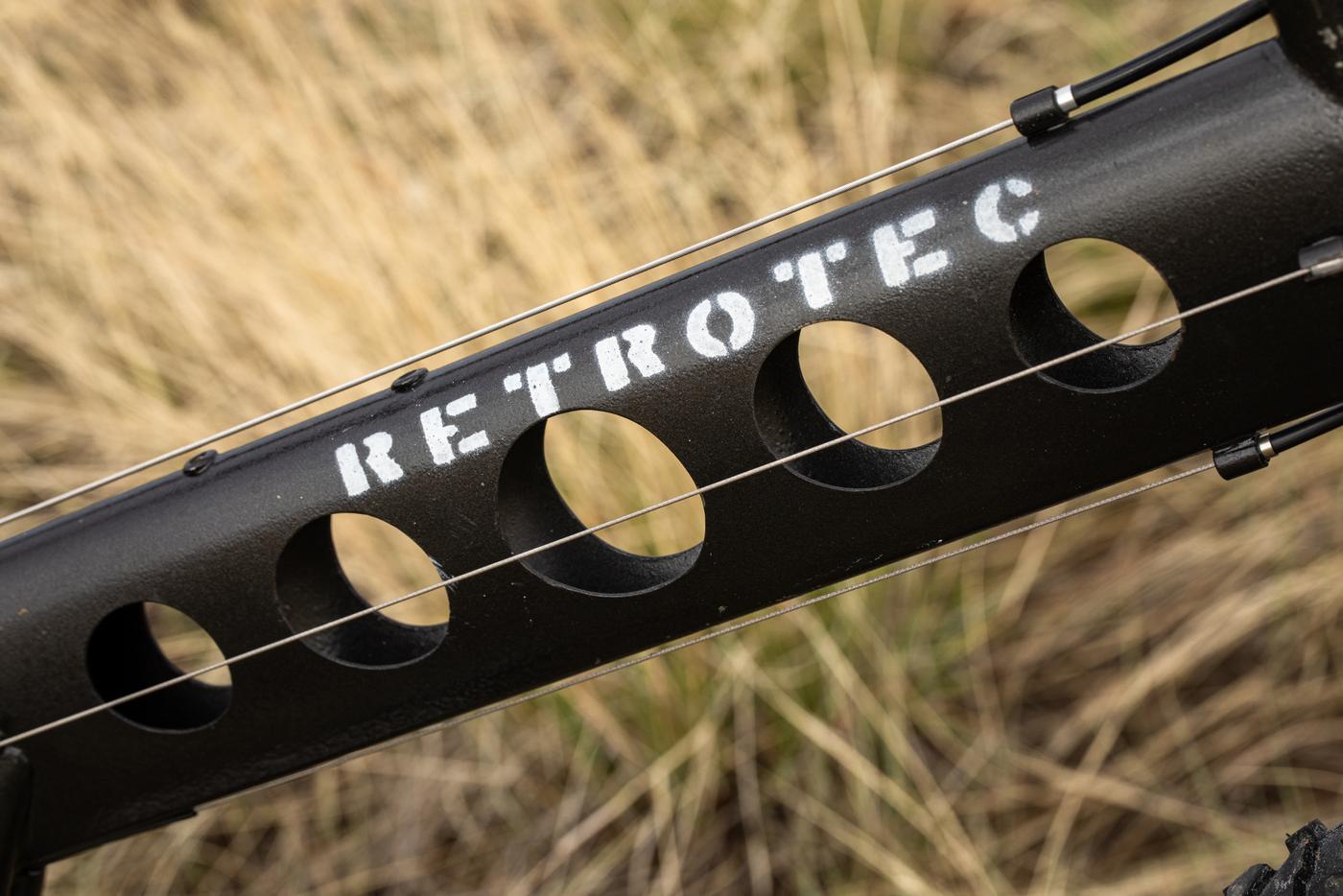 As we move to the back of the frame, we find something that should be at the front — a fork! Four cables support the fork at the back of the frame. Believe it or not, the design pulls inspiration from bikes built in the late 1800s with its cable truss format. Sort of like that Royal H. Cycles featured in the Philly Bike Expo coverage on this site. In this application, the theory is twofold. First, the compliance of the fork offers muted suspension qualities. Tucked beneath the bottom bracket are two skateboard truck elastomers to aid this controlled compliance. As the fork flexes from trail input, it’s held in check by the cables. The second benefit of this design (in theory) is that, as you lean into a corner, the rear wheel can remain more upright, thus increasing traction. More traction, more speed. The tension of the cables can be adjusted to suit the riders’ preferences. 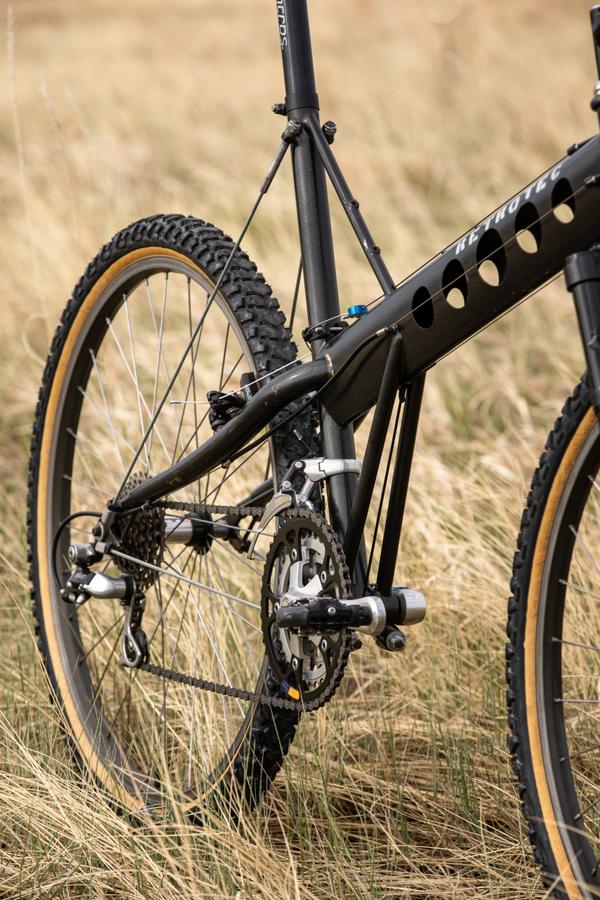 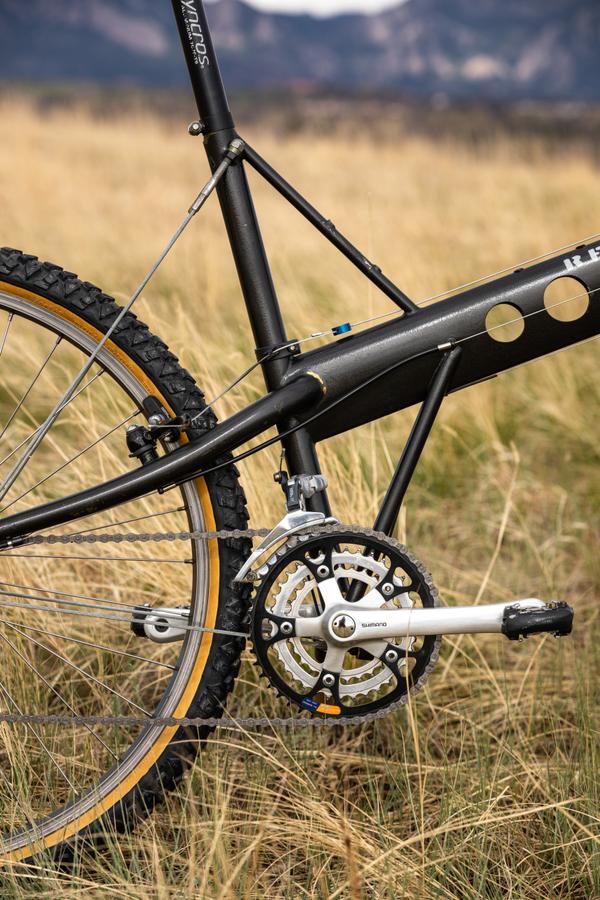 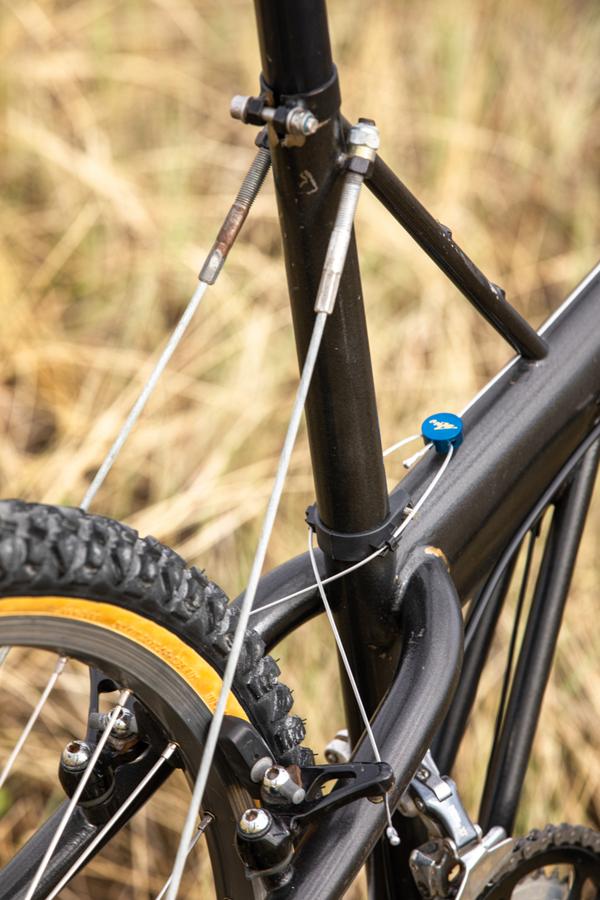 For as wild as the Dirt Craft Cycle looks, the geometry is nothing out of the ordinary for the time. 71-degree head tube, 73-degree seat tube, 16 ¾” chain stay length. This translates to a bike that rides really…normal. This Retrotec does everything well with no single stand-out characteristic (good or bad). The touted suspension qualities are muted and nearly invisible. You wouldn’t know anything was happening unless you laid a finger on the cables. But when it comes to owning and riding vintage mountain bikes, do we really care? It looks like nothing else on the trail, rides as good as anything else at the time, was handmade in Northern California by a well-respected craftsman, and it’s rare. The Retrotec Cool Toob Human Powered Dirt Craft Bicycle is a delightful representation of the golden era of mountain biking. 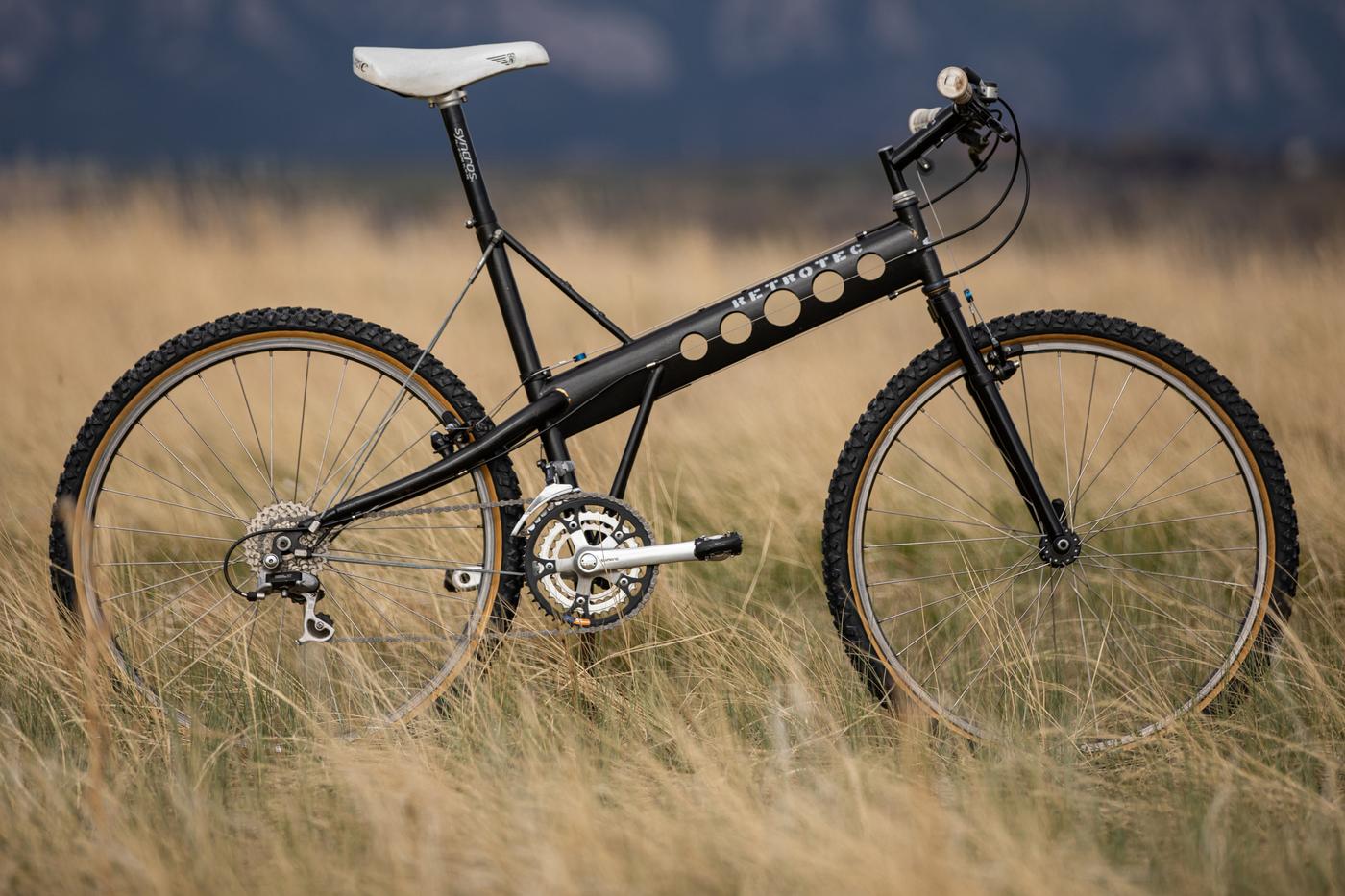