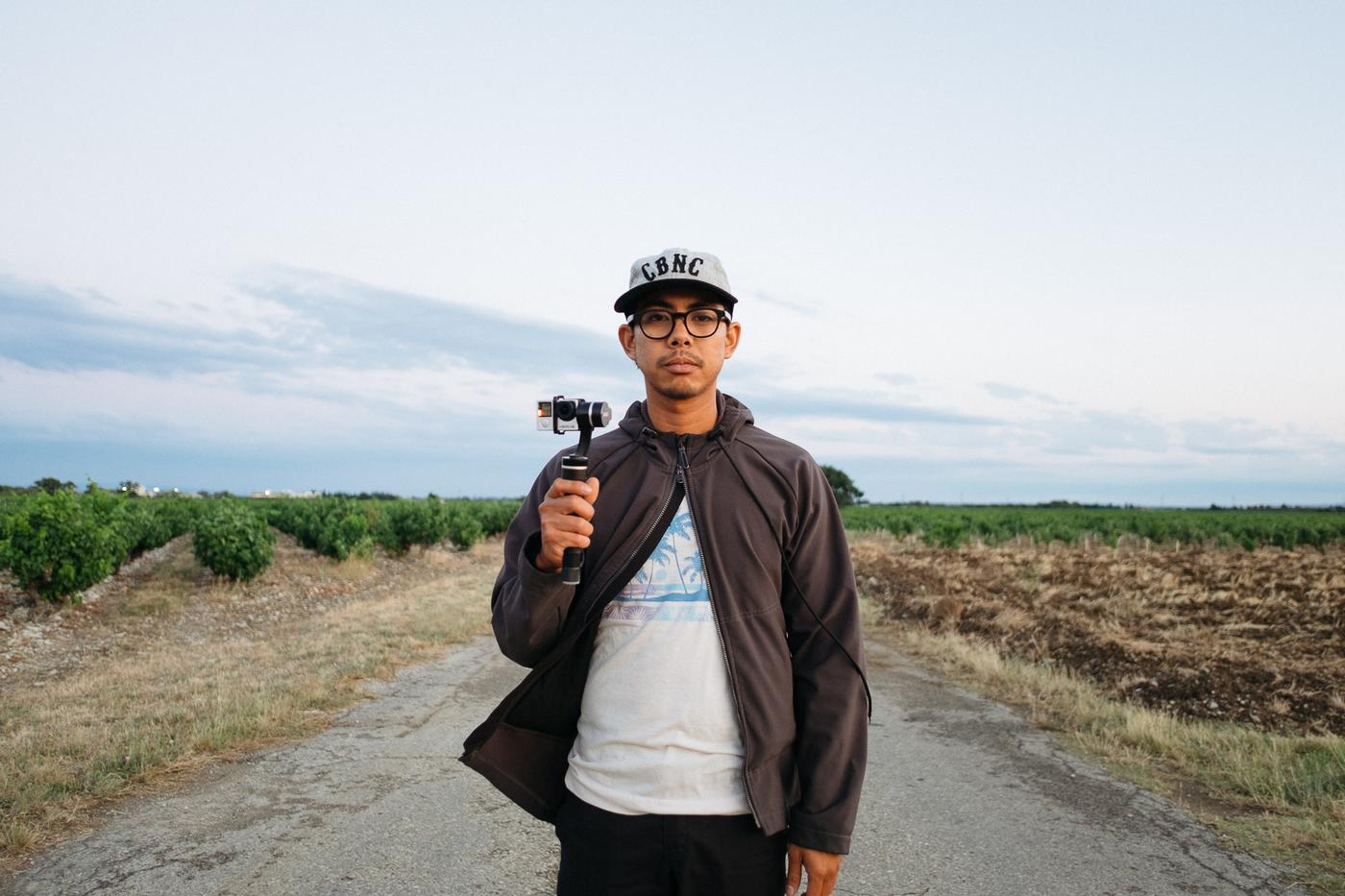 A few short days later Ace “The Sleepers” Boogie and I were on our way to Europe when we spotted American Cyclocross Legend Tim Johnson on our flight from Newark to Geneva. I said to Ace, “Hey, that dude sipping champagne in first class with gold plated Beats By Dre. Headphones looks a lot like Tim Johnson (at the time I had no idea he preferred to be called “American Cyclocross Legend Tim Johnson” so I was still just calling him plain old “Tim Johnson”.) At first Tim didn’t see us, probably because of the cucumbers covering his eyes. So I interrupted his rest to let him know that people usually slice the cucumbers before placing them over their eyelids. Tim (or ACLTJ as he prefers it,) was kind enough to have a flight attendant bring us a cheese plate from his first class accommodations all the way back to the (shitty) coach section. Coach is where peasants like Ace and myself sit on airplanes. I was hoping that American Cyclocross Legend Tim Johnson would make the trip himself, but the long journey to the rough side of the plane coupled with some inconvenient turbulence seemed to be too much of a burden for the resting legendary athlete. 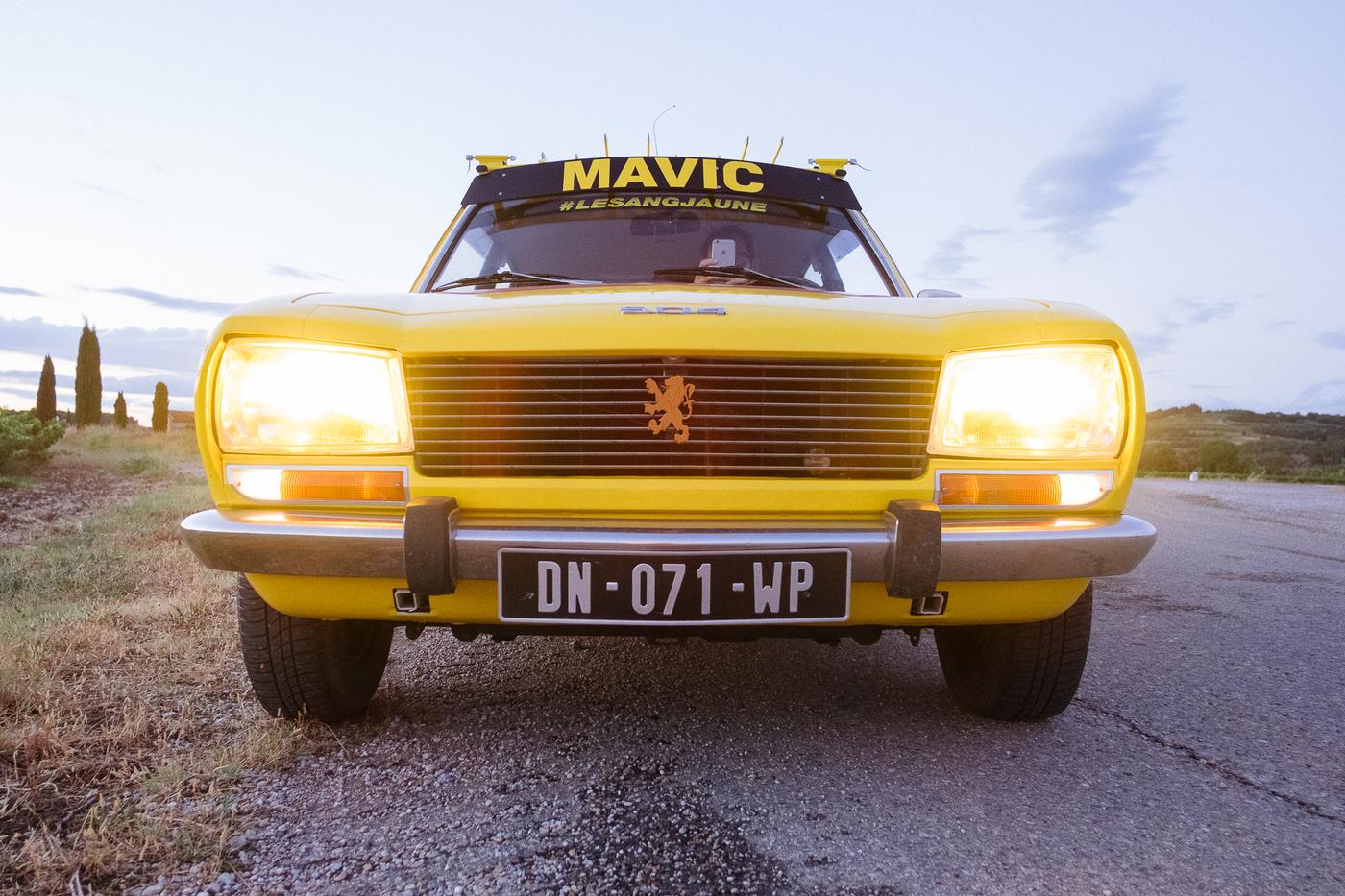 After we arrived and picked up the car, it didn’t take long for us to fully grasp the level of appreciation people in France have for the old Peugot 504 Service Course Vehicle. Once on the road, people immediately began to wave and honk at us. We were all pretty excited by this. None of us had ever been to the Tour before so we were understandably giddy about our situation. Waiving back and tooting the horn non stop for our adoring fans like prom queens in a small town parade. We were three Americans driving around in the French equivalent of the Good Year Blimp. This bright yellow national treasure was now in the hands of three goofy foreign misfits. When we stopped for snacks or gas or because the car stopped working (these all happened often) it was really fun to see the confusion on passerby faces when they would ask us questions in French…. because none of us speak French! Imagine if the Oscar Meyer Weiner mobile rolled up to your neighborhood and three Norwegian guys got out speaking zero English! I’m guessing it was sort of like that. 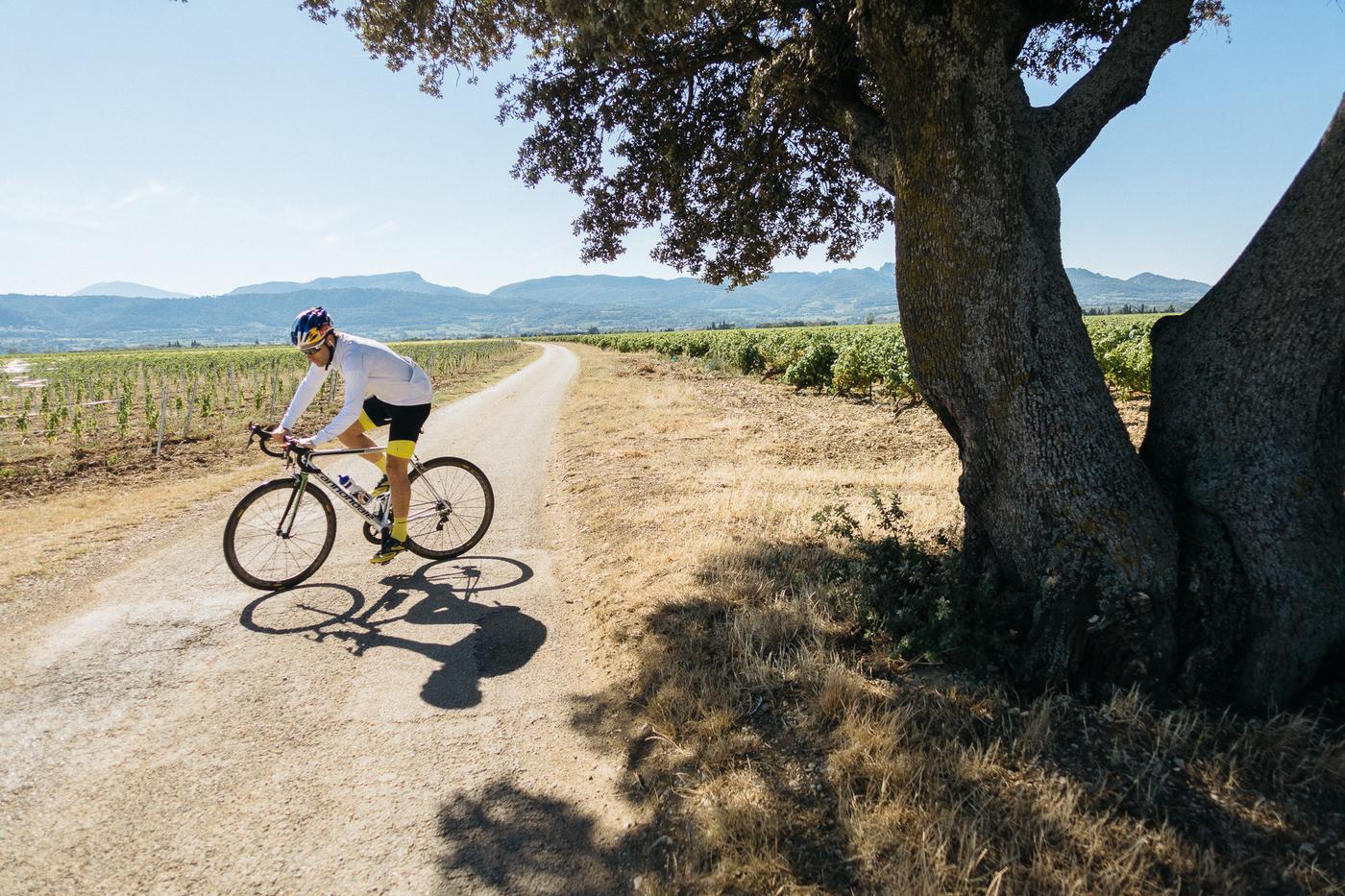 Our first official day on the bike was an event called Le Tape de Tour. The ride covered the exact same route that the TdF would be visiting two weeks later on Stage 20 from from Megève to Morzine. This Stage was picked because of it being this years Queen Stage. The “Queen Stage” is a fancy term used to describe the toughest stage of a multi day race and the route for Stage 20 did not disappoint.

At the start of the event/race/fondo/fun ride (the type of ride this actually is varies from person to person, depending on who you talk to) I was blown away by how many people were at the start. There were thousands and thousands of people and bicycles everywhere. I asked Tim how many riders were signed up and much to my surprise there were going to be 15,000 people. That’s a whole lot of spandex going up and DOWN crazy Alpine mountain passes at the same time. So there we were, giddy with excitement, sleep deprived and punch drunk with jet lag riding in the French Alps. All with an indescribable amount of humans! A nonstop train of cyclists for hours and hours. All I can say is that riding with that many other people over multiple Alpine climbs was insanely beautiful on the uphill sections and just flat out insane on the descents. The next morning after Le Tape de Tour was done and with dead legs we were officially back on the road and officially chasing the TdF. Until the car broke down, again. We camped out near Mavic Headquarters in Annecy for the night and left the car in a French Junk Yard to be “fixed” (it even had a French junk yard dog living there.) The next day after riding all morning in the rain we were reunited with the car. Yay! So now we were back after it and on the road charging steadily along to chase the Tour. Until the car broke down… again… in the rain this time! I’m pretty sure this is also the time that I came down with bronchitis. This is basically how things went for the next few days in the ol’ Peugot 504 until the brakes finally went out and we decided it best to leave her for good at the base of Mont Ventoux and get a rental van. I guess descending a steep mountain in a car without brakes and hundreds of thousands of spectators crowding the road seemed like it (allegedly) could be potential bad PR for Mavic. 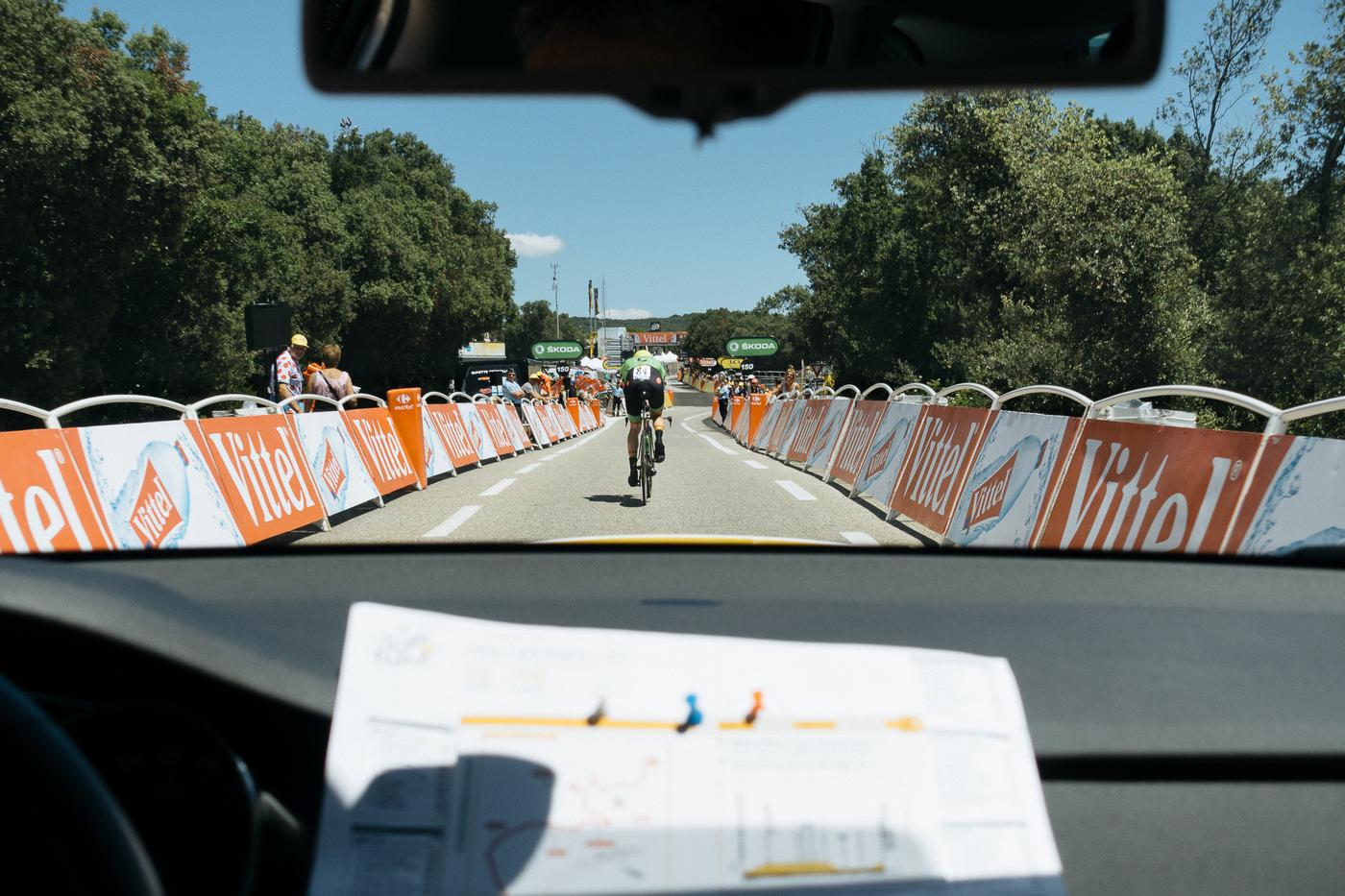 The entire TdF trip is a bit of a blur now but some of the most memorable takeaways (over 1 month later) are that we had a lot of fun eating awesome food, riding bicycles through one beautiful small town after another and meeting new people. I also remember riding in the most insane wind ever in my life and quickly coming to the realization that I am most definitely a fair weather cyclist. I mean, I think I enjoy the novelty of shitty weather primarily because we see it so little in LA. How on earth do these guys race like banshees in grand tours all day for 21 of 23 days in whatever conditions come their way !? The energy on Mont Ventoux was indescribable and had to be an all time personal highlight for me as a cycling fan. Riding in a support vehicle for the TT was way cool too. Epilogue:
After our TdF obligations were over my girlfriend came out for a little road trip without bicycles. We set out for the south of France and then later to Italy to stay with friends in the Italian Alps. On our way through Milan we were able to make a quick stop at Colnago to visit their bike museum. The space is quite spectacular. If you find yourself in the area I would highly recommend checking it out… just don’t ask to ride the Pope’s fancy golden bicycle (I did…they didn’t laugh). Whatever, the tires were flat anyway!

Ciao, Au Revoir, See ya Europe… until we meet again!