FILE TILL YOU DIE-1 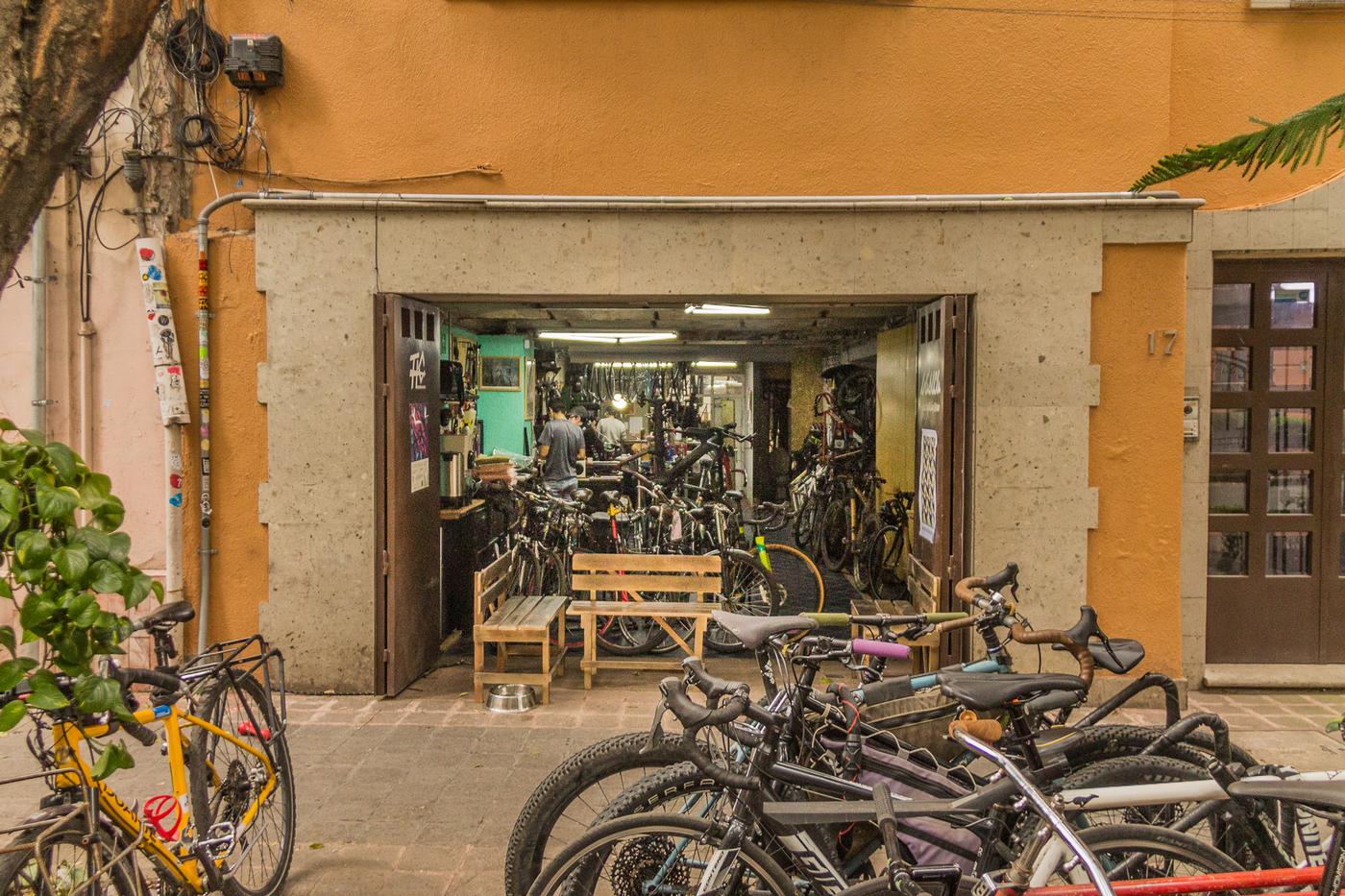 As we’re catching our breath Eli comes out to the sidewalk and greets us. Having been an admirer of her work for a few years now, I wasn’t ready to meet her in person just yet; I start explaining our intentions of making a story about her, but apparently, I have lost the ability to talk to new people and as I’m speaking the face mask suddenly feels suffocating, and my excitement combined with the elevation leaves me out of breath mid-sentence. Luckily Karla takes over and finishes explaining our mission, or I think that’s what happened, my oxygen deprived brain is not sure. 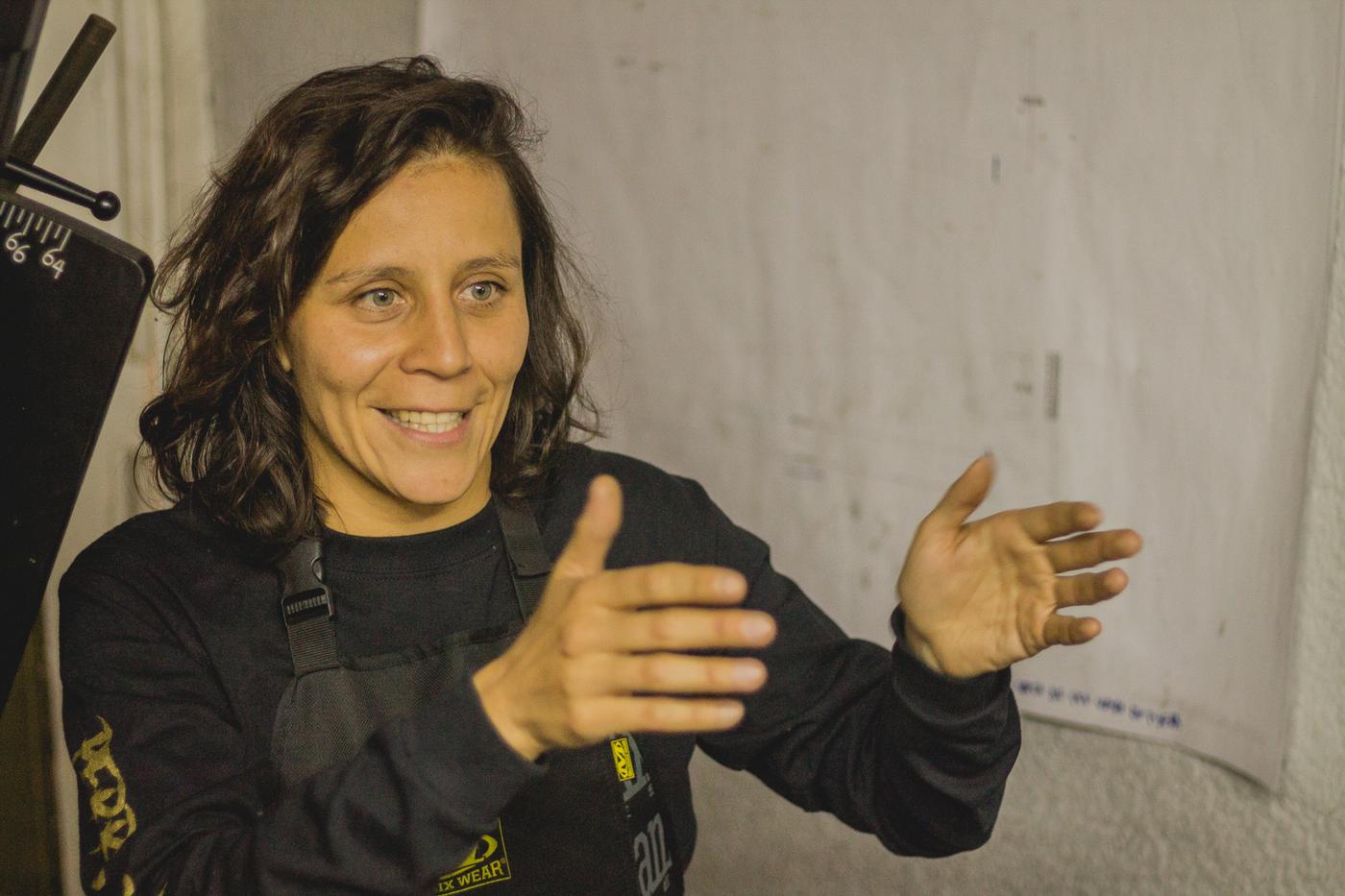 After parking our bikes, we walk inside the shop behind Eli. We are greeted by Cerberus guarding the gates of Básica Studio, but instead of music all we needed to make it past Tiggy, the shop’s pit bull, was letting him lick our calves. Básica Studio’s front face is the bike workshop, where people who require mechanic assistance are taken care of by Juanito and Vito. Behind this, there’s a little corner for the True Wheel Society, where they work on wheels and tires, and TIG Bicimensajería, the bike delivery service offered by Joaquín, then at the end there’s the frame building area. Crossing the shop feels like traveling back in time in the life of a bicycle, starting from fully assembled bikes, passing to bare frames and components and then we leave colors behind to enter a more monochromatic world, inhabited by machines, tools and tubes of raw steel. Eli starts explaining to us the general process of frame building; as she talks her eyes behind the mask reveal the passion she speaks with while her hands dance in the air to accompany her voice. Having never been into a frame builder’s shop, my eyes are jumping everywhere as I follow Eli’s explanation. Years ago she was working assembling bikes and she realized that bicycles were complex but also defective, so under the apprenticeship of bicycle mechanic and frame builder Manuel Valerio she learned how to build her own. Eli tells us she had the privilege of having a mother who, despite not being exactly sure what she was doing, supported her to acquire the first machines that she needed and in 2012 she arrived at a coworking space named Atea with her frame jig and a bunch of tubes. Joining forces with cyclist and architect Jesús López aka Txutxo, Básica Studio was officially born as a custom frame building project working with TIG welding and fillet brazing, which is Eli’s specialty. Eli shows us the first frame she made, a track bike with bare steel tubes and golden lugs and dropouts. “I saw these lugs on eBay and thought about building a bike around them. I asked the owner to send me photos from different angles and as he was taking them he said he was starting to like them again, but in the end, he did sell them to me.” After going over the technical stuff of building a frame, Eli then takes us into a more personal space: “A frame emerges with delicacy, with exquisiteness. Art is an essential part of Básica, and welding is a choreography. A good weld is the result of a bodily matter, and you have to be comfortable when you do it. And then, you file till you die.” “The bicycle has its own autonomy – suddenly Eli scratches her right arm with her left hand – Look, I got shivers. The last bike we made? I didn’t even know what we charged for it, I was just so excited about seeing it finished. Txutxo asked me, ‘Don’t you want to know how much they paid?’ That bike was taken on a tour the next day we delivered it.” Eli has never heard about another female frame builder in Latin America; she tells us she has been patronized and made fun of before, but that she has used the rage caused by this as a growth boost and that most of the people coming into the shop express their admiration towards her. She is currently running her own apprenticeship program and has two women under her wing: “One of them is a petroleum engineer and she hates her career, so that makes her a perfect apprentice”. The plan for the near future is to offer a line of affordable frames, suited for urban riding and weekend escapes, made in México and by a crew of women. 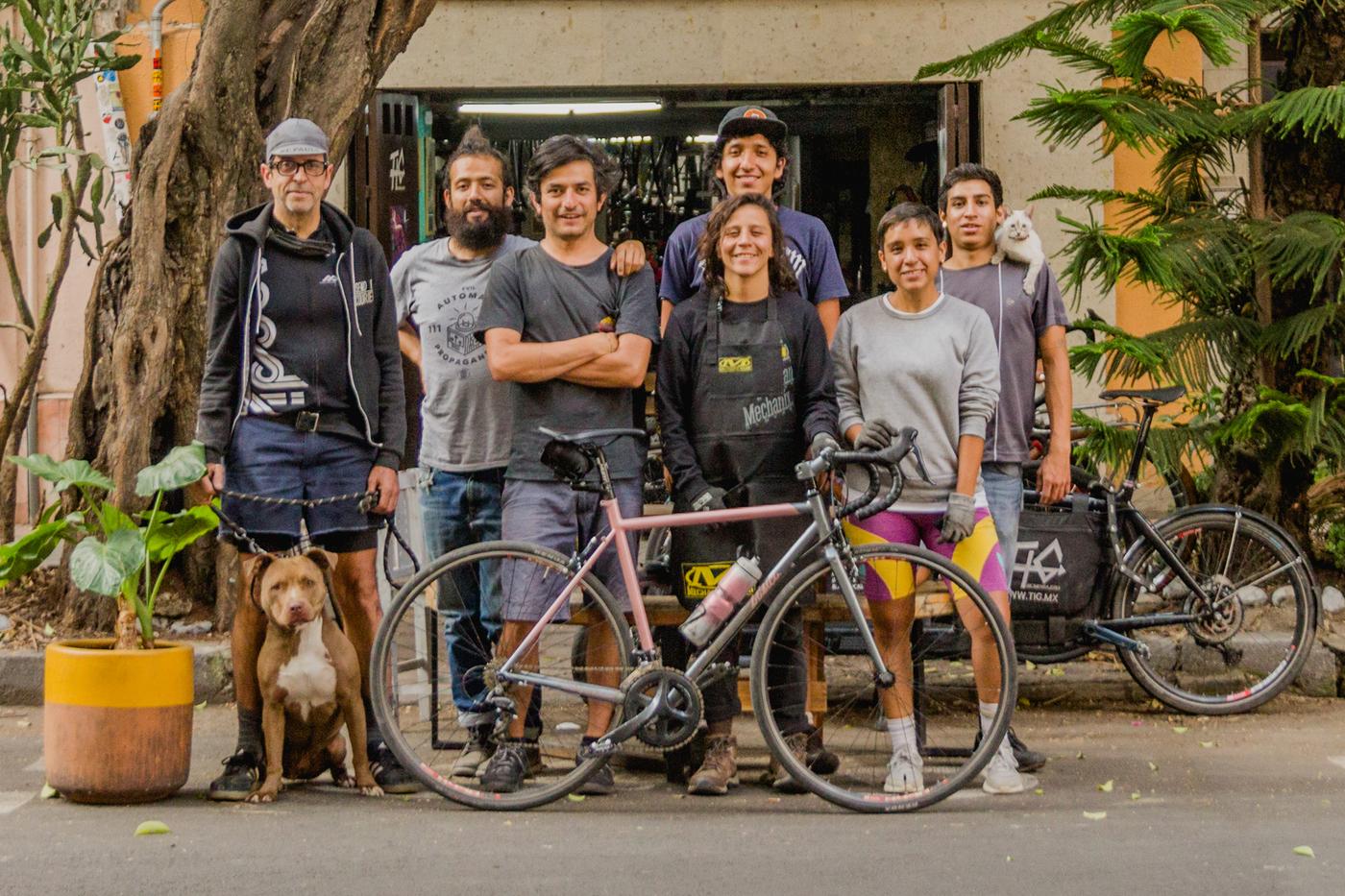 Básica Studio doesn’t currently have a catalog because they’re still experimenting and polishing ideas, but they might have a series of models available some time without leaving the experimenting part aside. “Básica is named like that because the bicycle is basic for life”, says Eli, and there are few statements I’ve agreed with as much before as this one. In the upcoming days we’ll be showing some of the bikes made by Básica Studio that are rolling around in México City, but be patient because first we have to go chase them and this is a really big city.