Before this story begins, I need to address a few topics and establish my intent here. There is a lot the Silver Stallion is doing within the Navajo Nation. Too much for me to outline it all in one single story. Hopefully, there will be more stories down the line written by those embedded within the Silver Stallion’s efforts. My intention with this particular piece is to shine a light on a small part of the community, their resourcefulness, and the knowledge passed down through the generations. What unfolds below is the result of documenting a weekend spent riding bikes and witnessing a truly beautiful movement. I’m going to try to keep my tone subdued and controlled but please know that after three days with this crew of people, all kinds of emotions boiled over… Every company needs a mission statement and the Silver Stallion’s is very succinct. They’re a 501(c)(3) nonprofit bike and (soon to be) coffee shop servicing the needs of Gallup, New Mexico, and the Navajo Nation.

Its intent is laid out in a mission, vision, and goal agenda:

Fostering the next generation of ridership, serving and growing our bike community, and protecting our homelands that we ride.

Initially, there were hopes of opening a coffee shop and café in Gallup along the Mainstreet corridor but Covid has temporarily paused those plans. For now, the Silver Stallion’s efforts are focused on free bicycle repair workshops, right from their Mobile Ride Center. Each weekend, they announce their location and hours on their Instagram account, allowing the members of the Navajo Nation to take their bikes in for repair. Let’s look at the weekend’s events in chronological order. 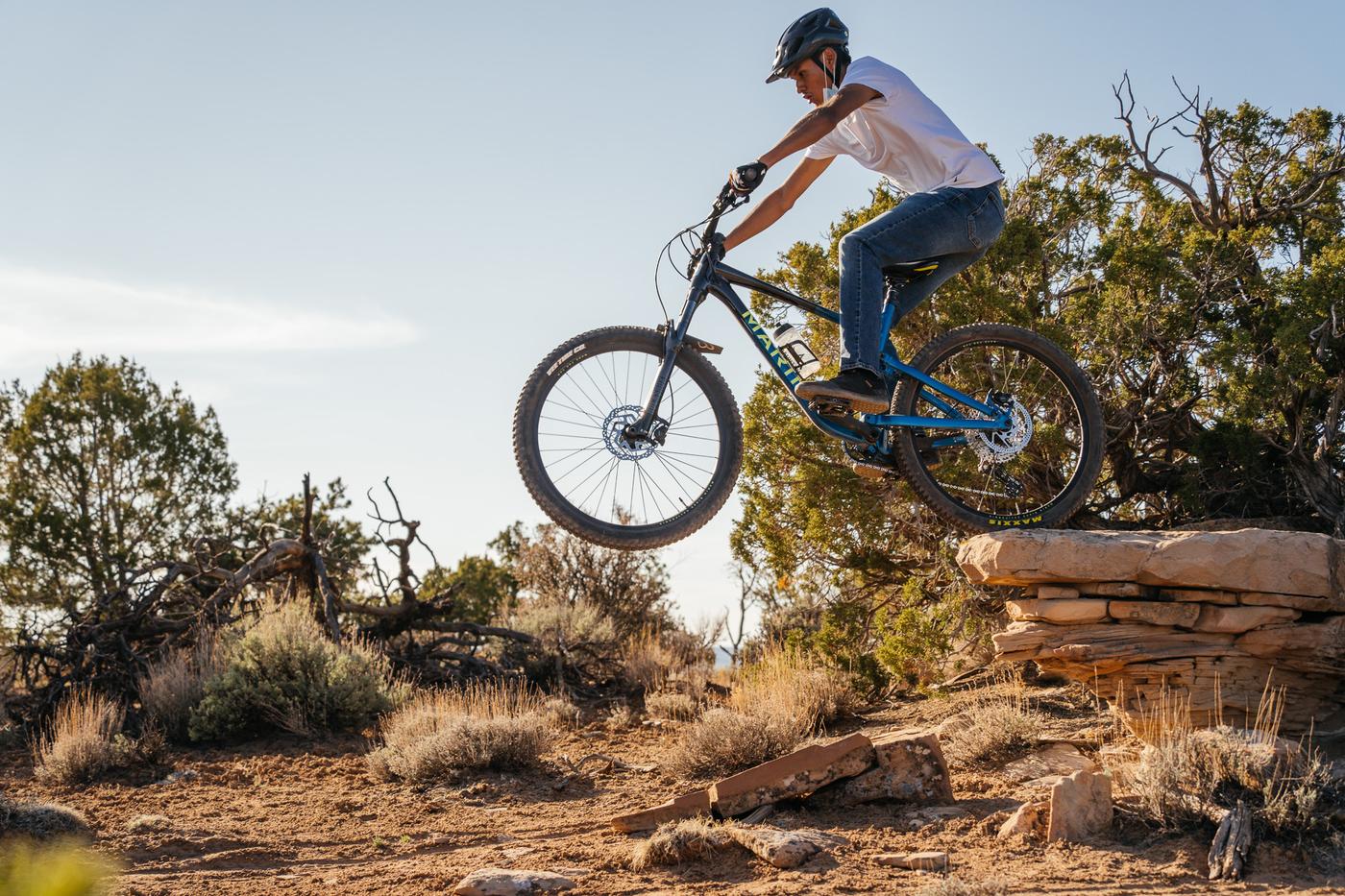 I arrived in Gallup and shot Shaun a text, unsure of where the weekend’s events would take place. After navigating a large construction site as the city of Gallup continues to work on revitalizing downtown, I found the Silver Stallion, and Shaun showed up a few minutes later with Charlie, who helped grow the bike mechanic training portion of the Stallion. 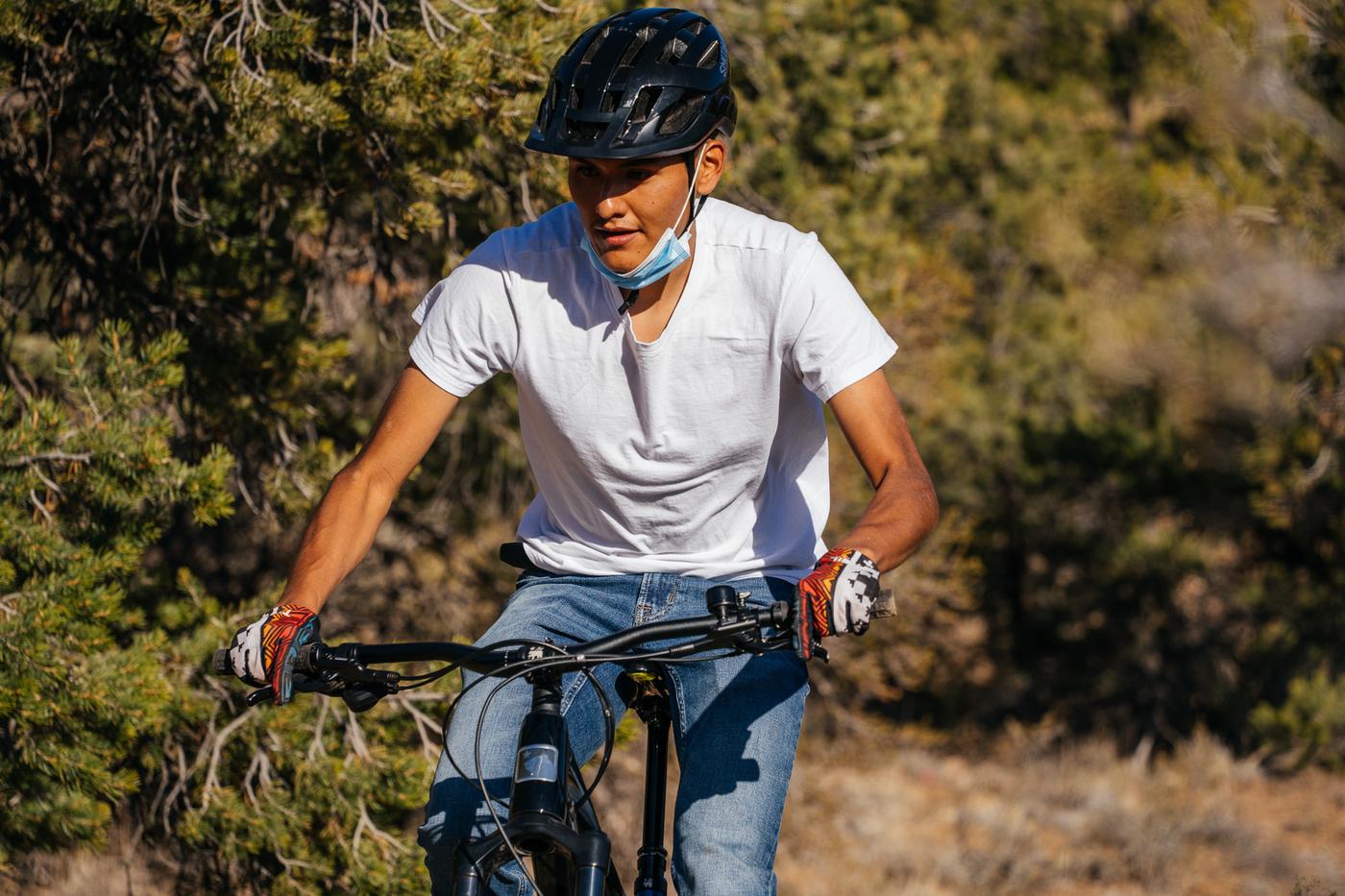 After shaking out my legs from the drive, we got a quick burger before heading to Window Rock, AZ to meet up with Dominique, who grew up on the Reservation and has taken a liking to mixed media, trail running, and mountain biking. Dom, as he’s called by his riding crew, picked up riding fast and has been guided by a few key figures. 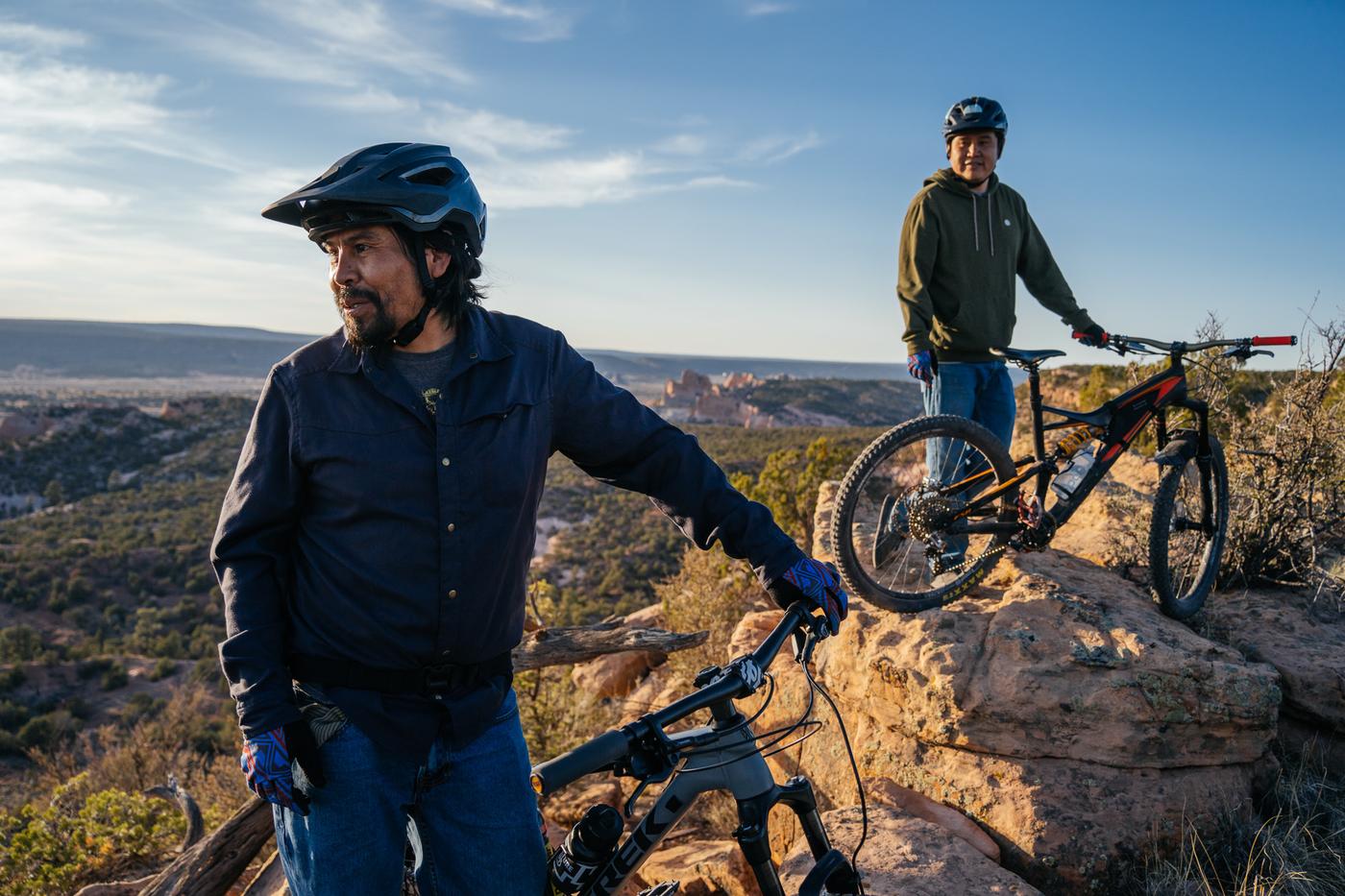 Shaun has helped Dom with his video and photo work, while Lorenzo and Frank, two lifelong dirt-oriented cyclists, took him under their wings to show him the ropes for riding trail. Documenting these guys ride this trail was such an amazing way to end the first day. Little did I know, Lorenzo and Frank did so much more for this community. 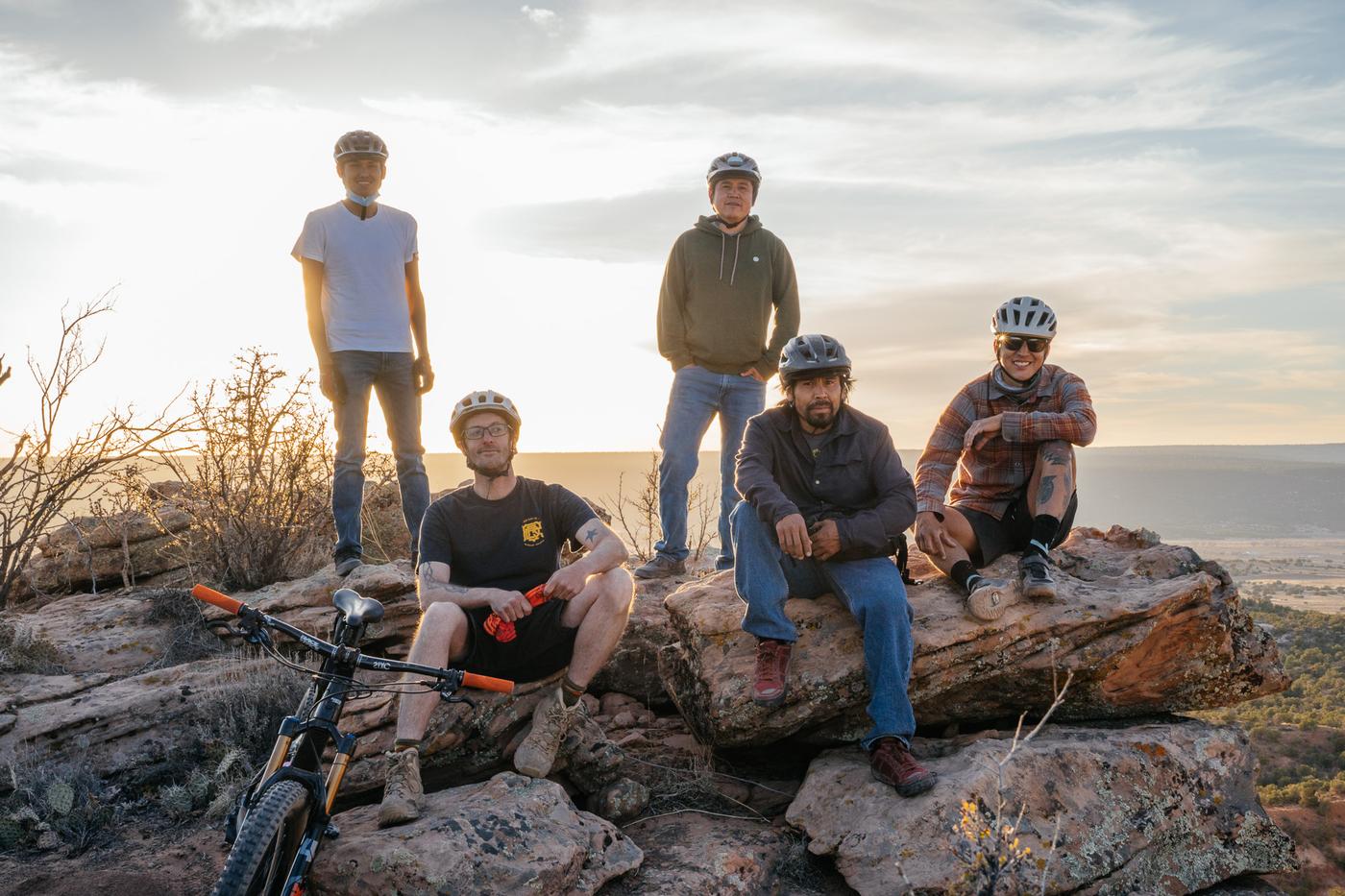 This crew took me in, showed me their trails, and even posed for a group photo. After riding until the sun went down beyond the horizon, we headed back to Gallup to work at the Stallion on some bikes. While Frank and Lorenzo wrenched, Dominique, Shaun, and I looked at the evening’s photos and began to form a bond over mixed media. The night ended with pizza and I returned to my hotel room, my mind filled with all the events from the day. 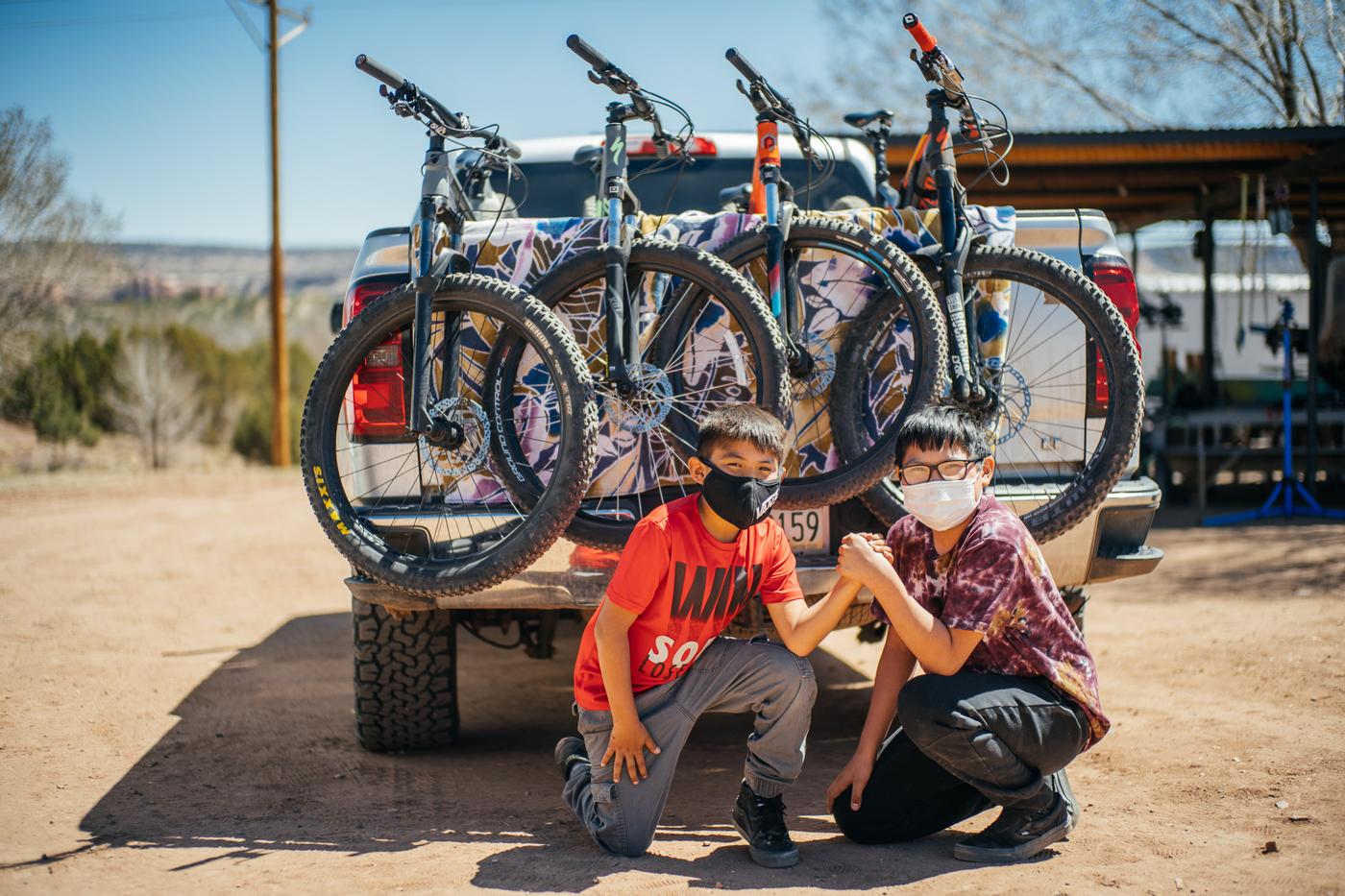 Part 2: Get the Kids Out on Bikes!

I had no idea what to expect for the weekend but was thrilled to work out plans for Saturday afternoon. Frank and Lorenzo were planning on taking some youngsters out on a proper mountain bike ride. First, we had to set up one of the kid’s bikes tubeless. One of the biggest reasons people will stop riding their bikes in the Navajo Nation are goat head thorns. Someone will get a bike, ride it, get a flat and not have anywhere to take it to get fixed. There aren’t bike shops on the Reservation – not one! – and that’s one of the most common problems Silver Stallion fixes for people on their workdays. With the tubeless conversion done, we met up and pedaled towards the trails. A meandering network of inner-neighborhood trails eventually led us to a long, gradual grade road, which terminated at a radio tower cluster. The kids rode and hiked the whole thing. I immediately thought back to my early days of cycling and couldn’t imagine taking on a climb like that but these kids have heart and determination. 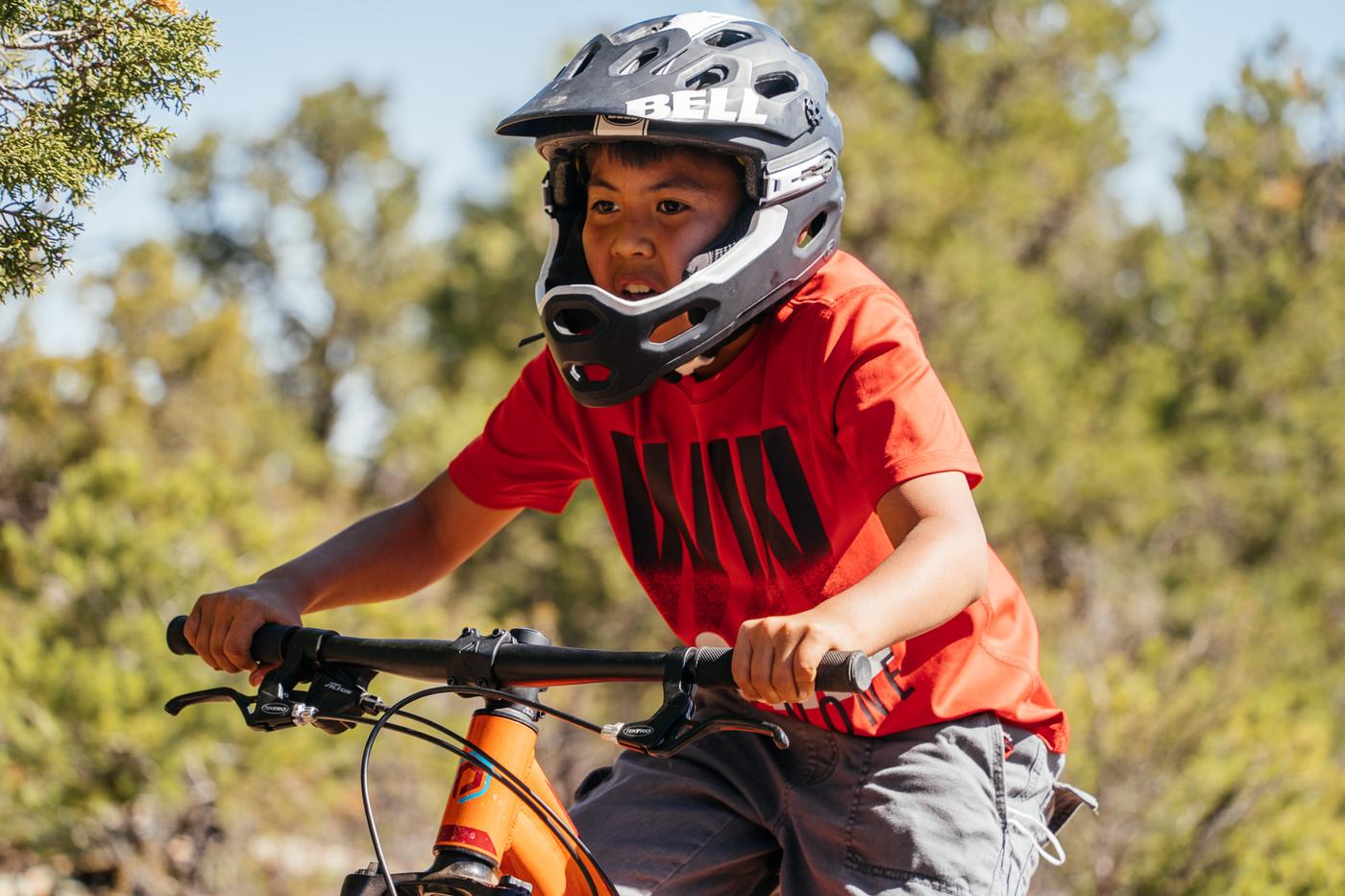 After traversing through piñon and juniper, avoiding various cacti and cryptosoil alike, we were ready to descend. Frank and Lorenzo gave the kids pointers, how to select lines and avoid wrecking. It didn’t take long for some over-the-bars action to take place as one youngster face planted in some sand, inches away from an opuntia cactus. 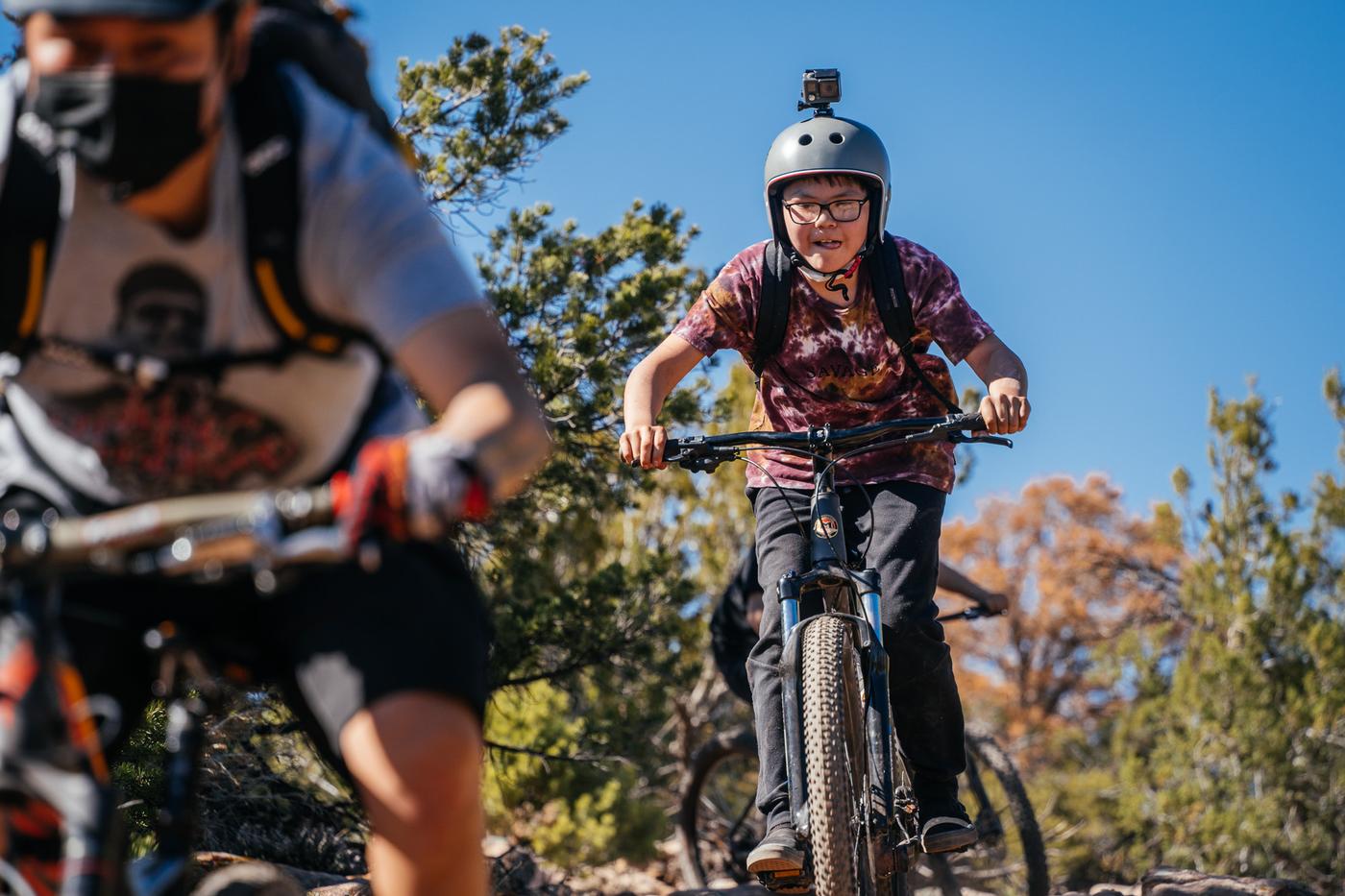 All the commotion and jubilant yelps were halted by a pair of red tail hawks, as they circled overhead. Fingers pointed to the sky as the messengers circled us, surfing the updrafts, spotting their next meal. We all observed these majestic creatures with awe and disbelief. How could they fly so elegantly, so high up? Soon, it was time to roll out and a ripping descent ensued back down towards town. There was a red flag advisory that day and it looked like the temperatures were finally awakened from their winter slumber. Hot. Windy. Dusty. So it goes in the Four Corners. I left my hotel to find Scott en route to the Speedy’s parking lot where the day’s work would take place. Scott parked the bread truck, the Mobile Ride Center which was donated by the Southwest Indian Foundation, in the lot and out toppled a handful of easy up awnings and dozens of work stands. Slowly everyone began to show up. Shaun in his Jeep and Frank and Lorenzo in their pickup. The kids were there too. What ensued was a rapid deployment of tools, stands, and before we knew it, the first vehicle parked next to the staging area with a few bikes to drop off. 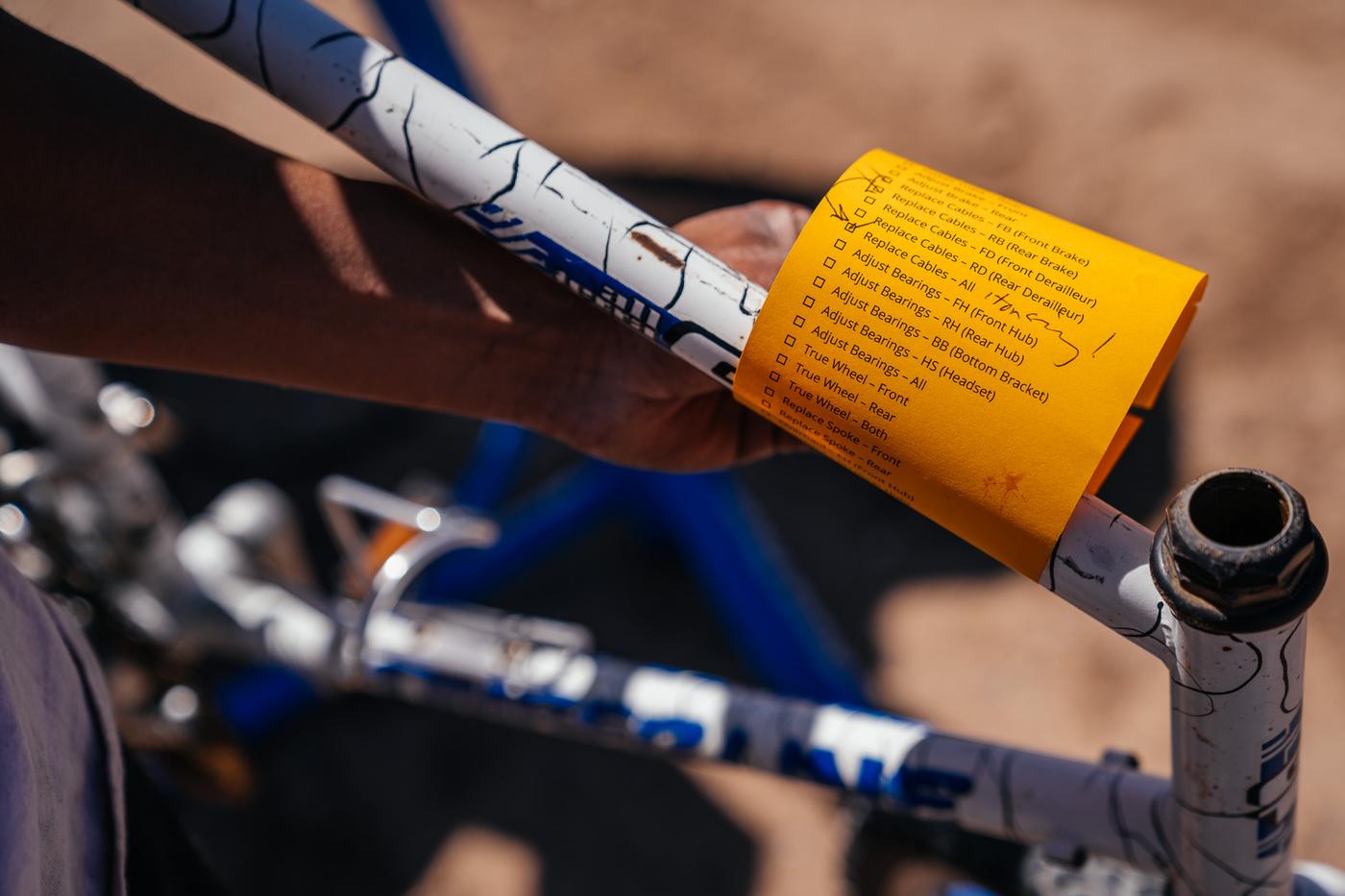 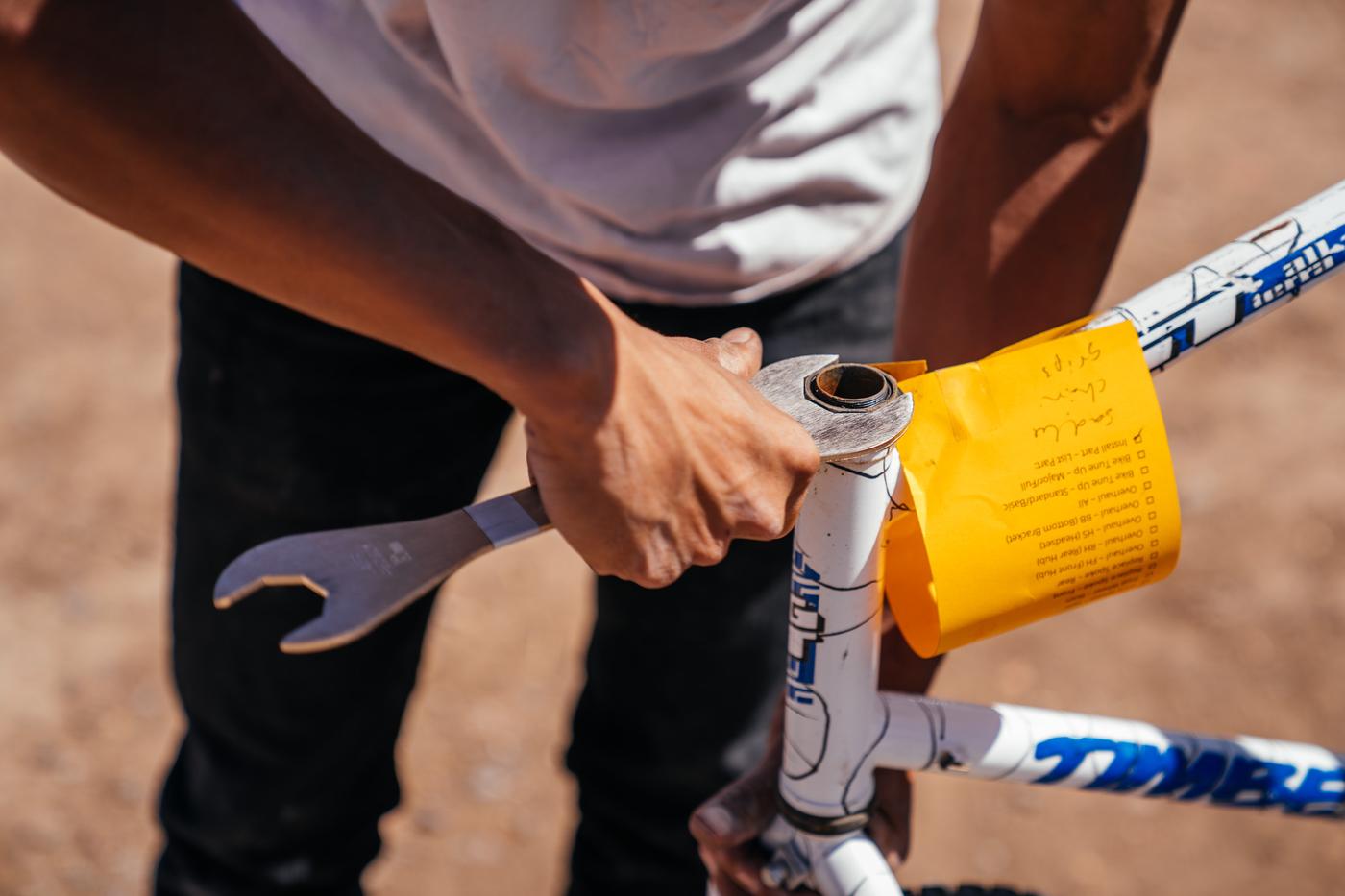 Their process has been a developing one and this weekend was the first time the Silver Stallion implemented repair sheets. Each bike received a yellow sheet of paper with the owner’s contact info and a long list of possible repairs. Along with flat fixes and chain lubrication, the crew also repacked bearings, Slime-loaded tubes, tightened hub cones, replaced cables, and adjusted brakes. 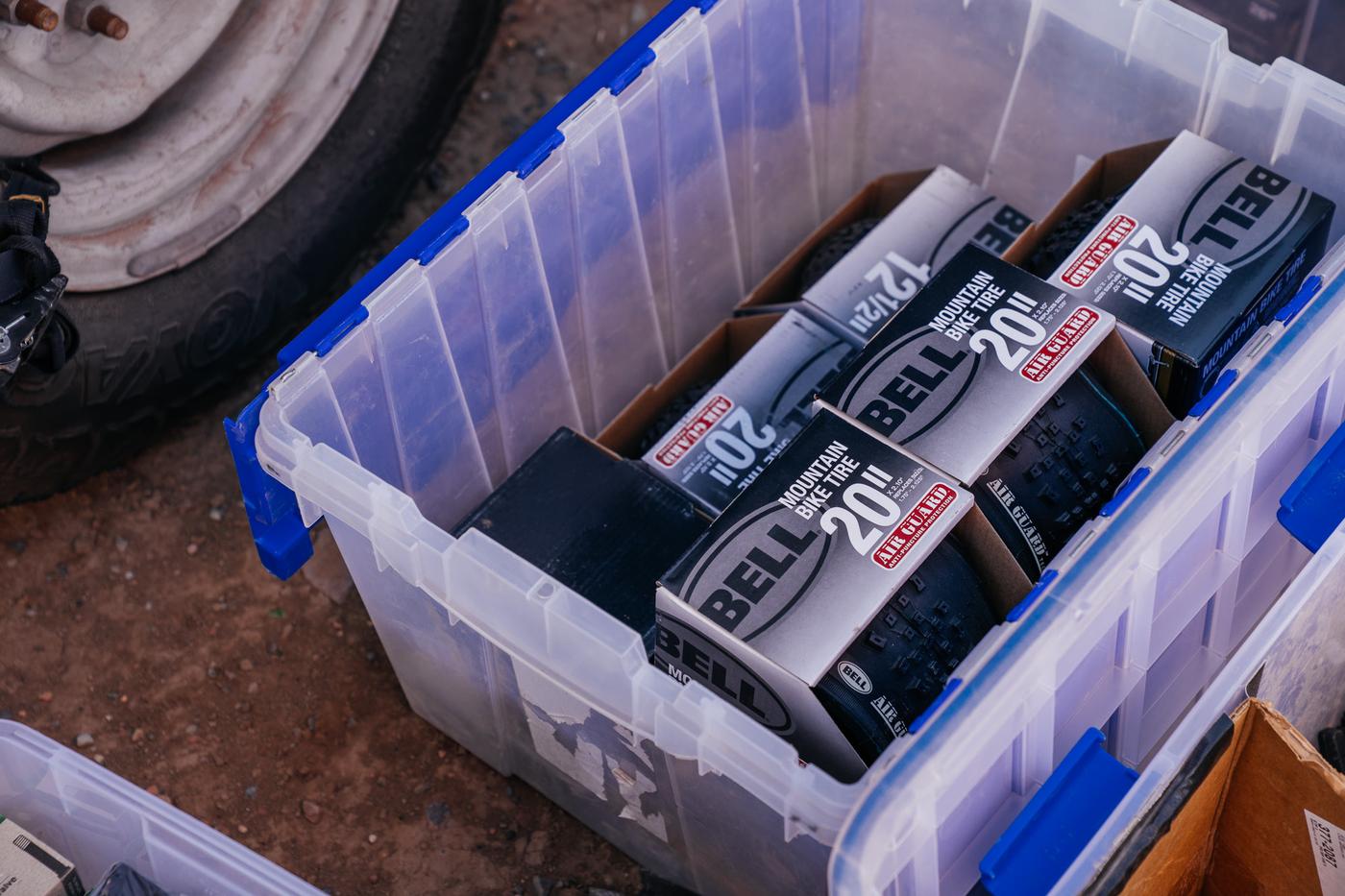 Most of these bikes were from big box retailers and they have lived tough lives but when they rolled out of the Stallion, they were ready for more action. Scott and Shaun expressed just how much the families appreciated their hard work. This is a labor of love and dedication. After I left, many families brought tips in the form of soft drinks and homemade yeast bread, even Navajo Tacos (Indian Tacos depending on where you’re from). 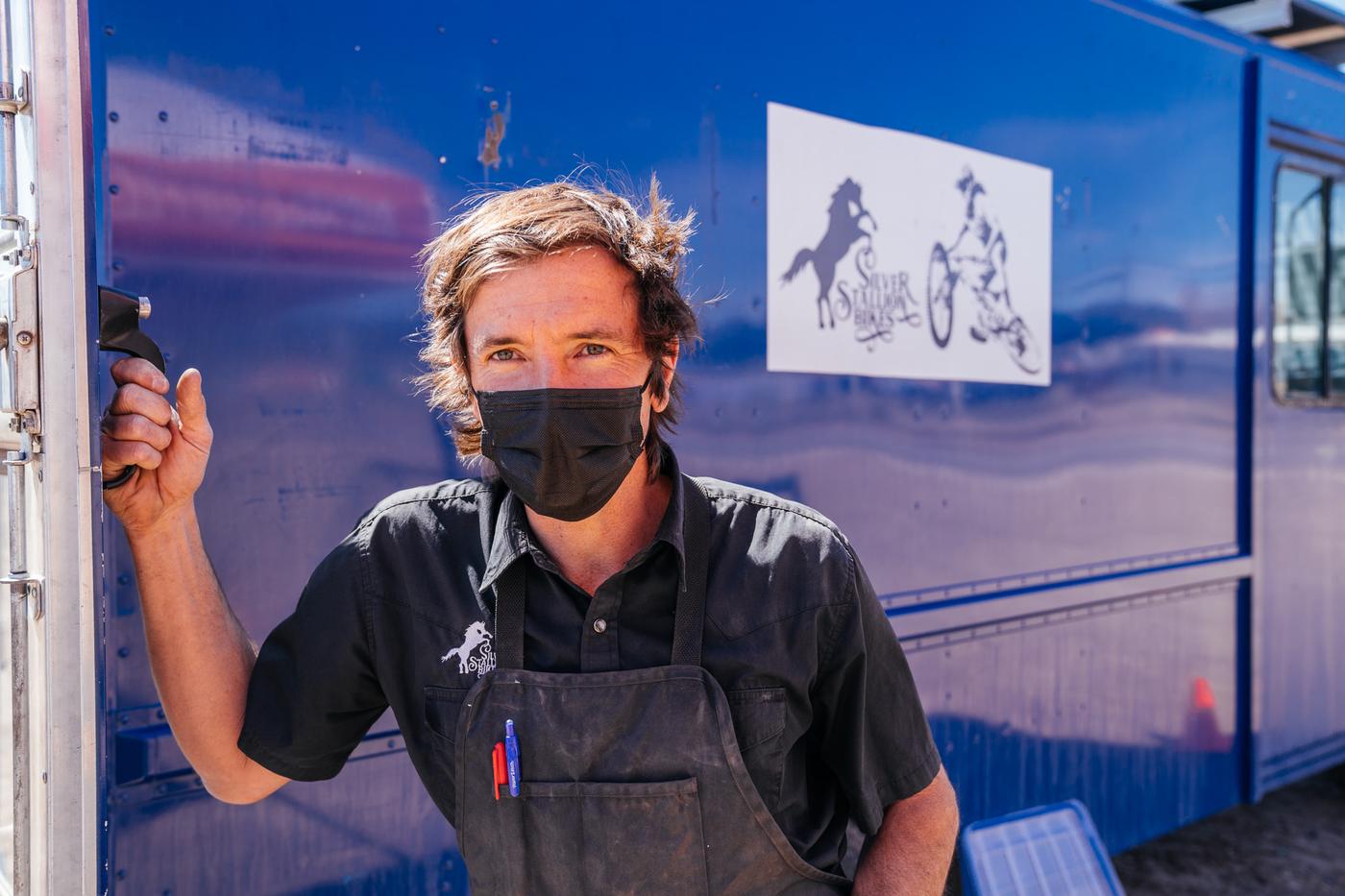 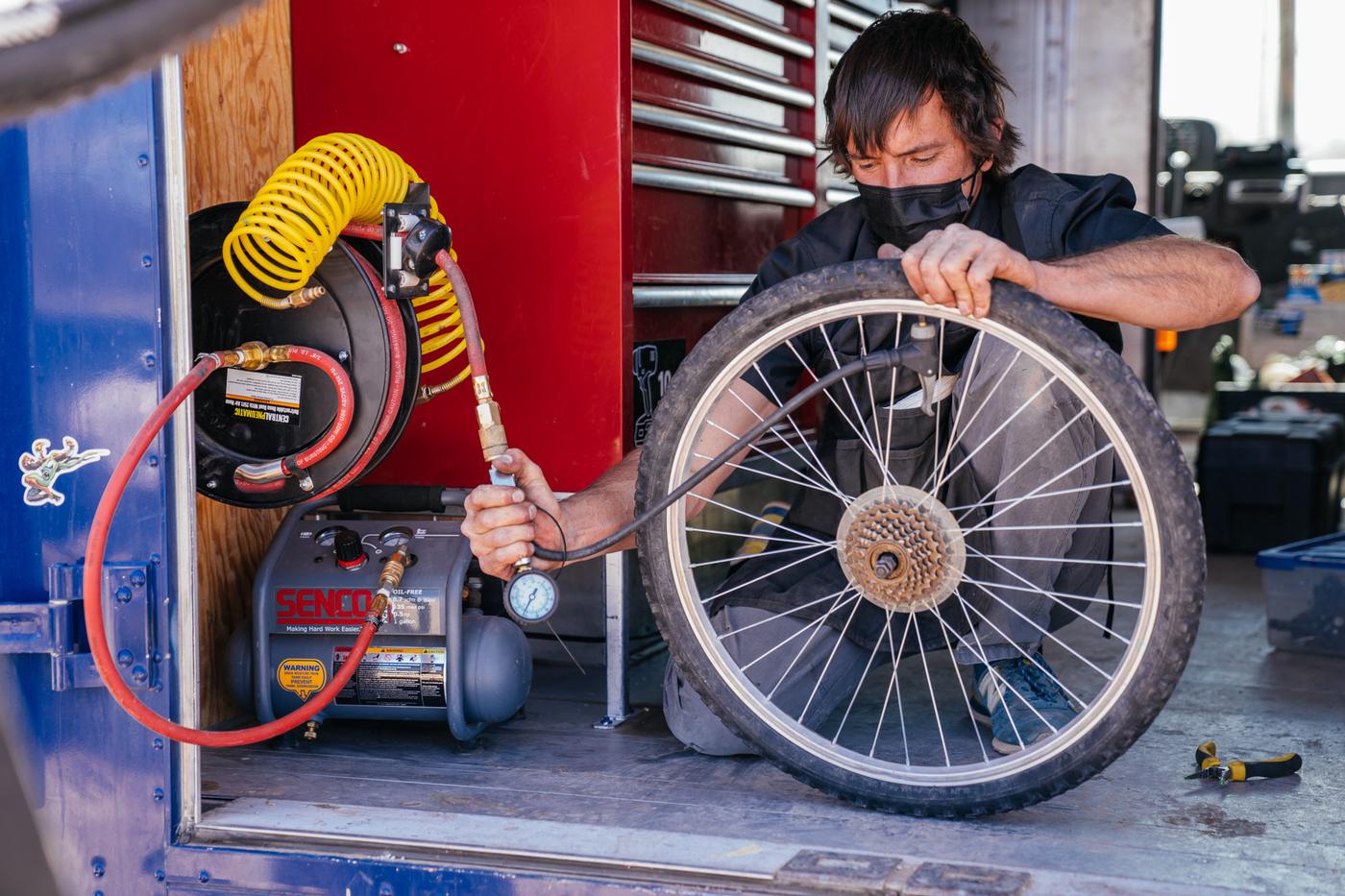 Scott and I talked about his motivations for dropping everything as a professional cyclist and a consultant/employee for BMC. He packed up his life and moved his family to Gallup in hopes of making a change. The process has been one of both rewards and lessons learned. With each weekend, the Stallion’s workflow becomes even more efficient.

It was a warm reception, on a very busy day. All in all, the crew had repaired about 50 bikes that day, wrapping up 10 more at the shop. 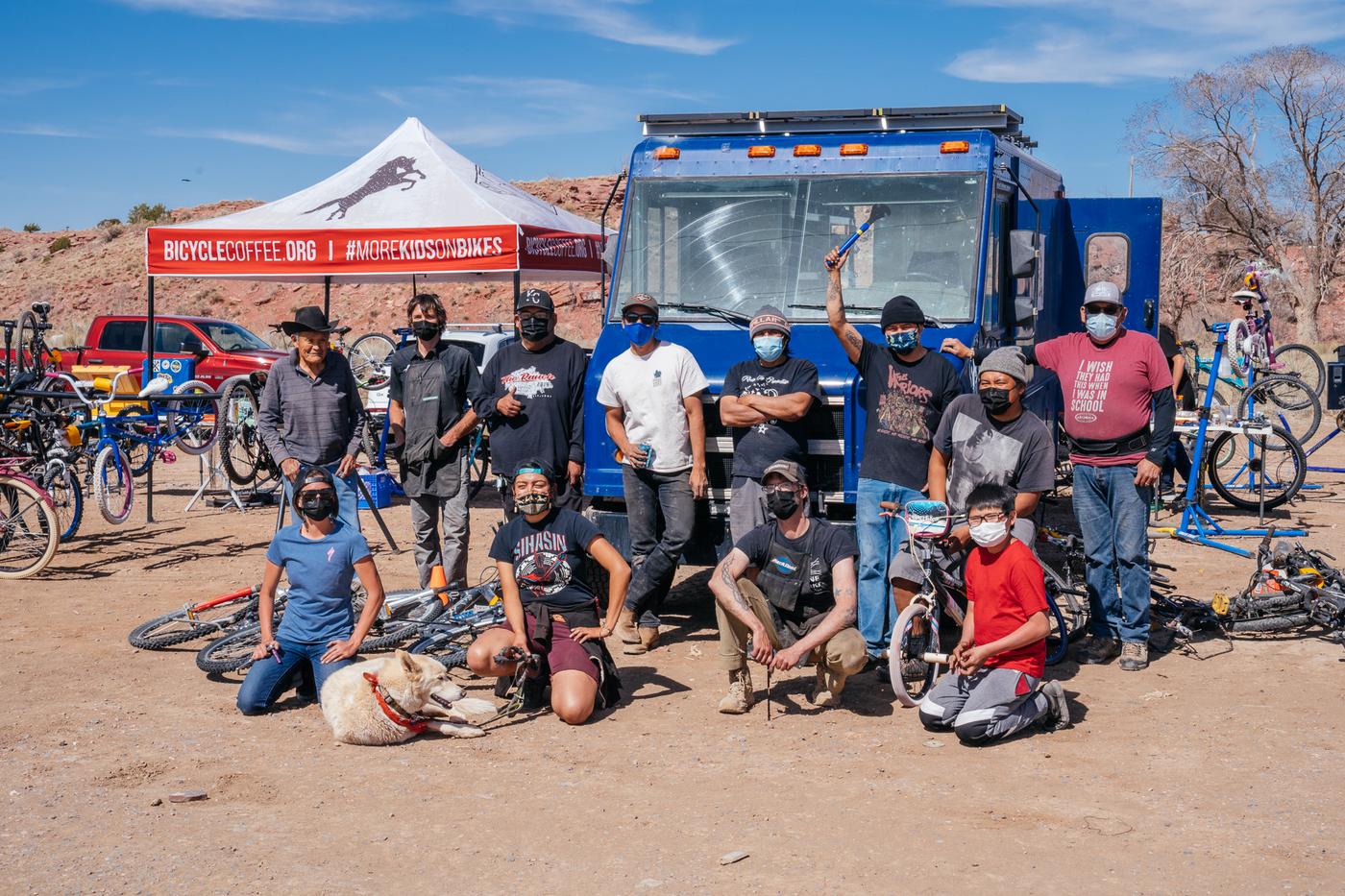 I soon realized that the day was slipping away. My SD cards were full and my mind was racing. I said my goodbyes, requested a group photo, and closed my notepad app on my phone. As I was leaving, I was reminded to not be a stranger. 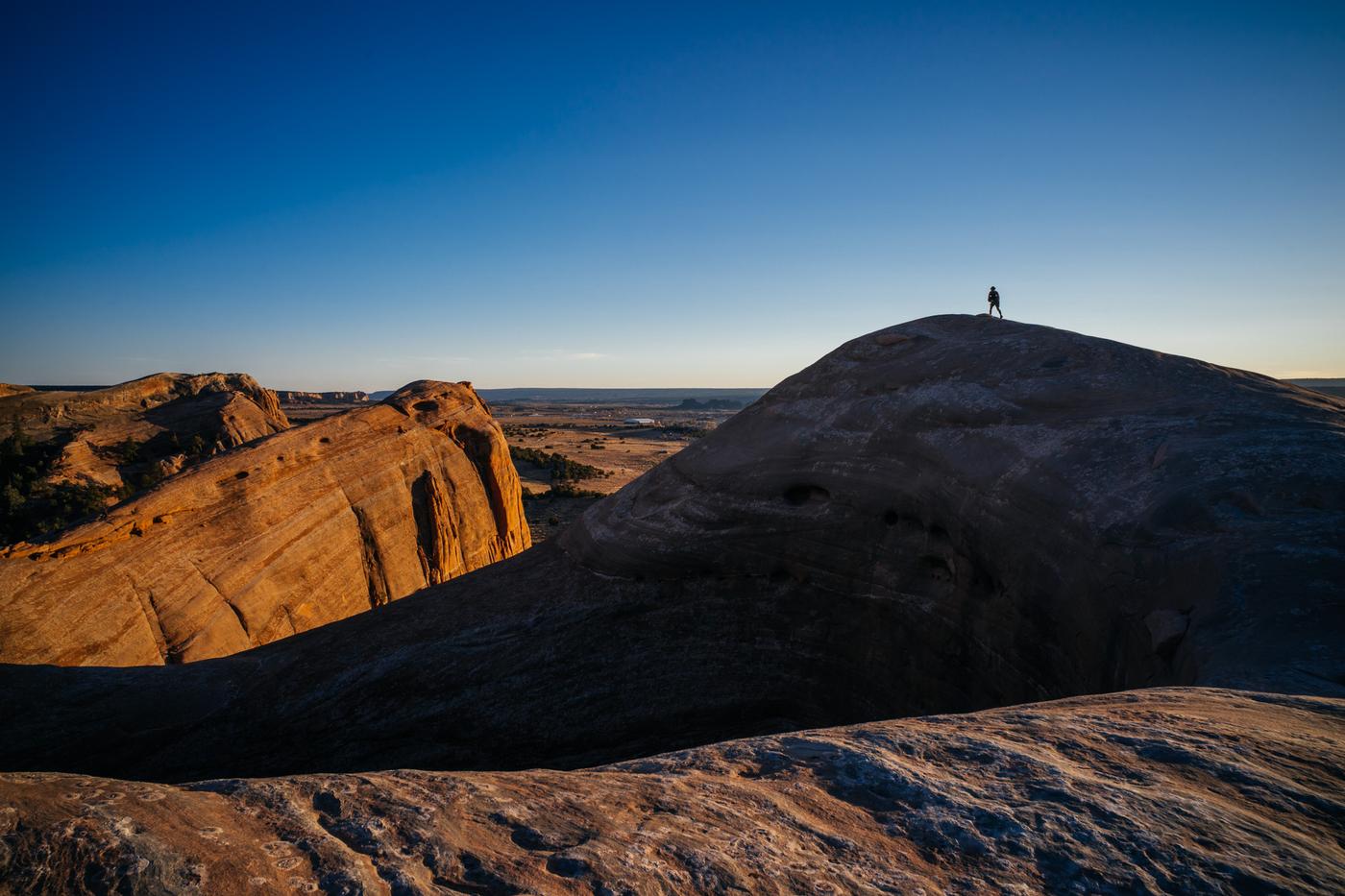 On the drive home, I began to mull over the weekend’s events. How could I even come close to documenting what is happening on the Navajo Nation’s land with the Silver Stallion? Would I do more harm than good by documenting the weekend? And lastly, how can I help out more? My motivation for relocating to New Mexico is to document all things bike-related and establish relationships.

I don’t want to be just a photographer or a media source, rather a friend and lifelong ally. I feel like we, as cyclists, get swept up in gear, grams, and Instagram, when what I witnessed this weekend is the true meaning of community. Bikes are a tool and like any tool, their use is up to the intent of their wielder. What the Stallion is doing is using bikes in a positive, enhancing way.

My hope is more stories unfold over the forthcoming months and years, allowing those within the Silver Stallion community to document through their own voices and photos. This weekend was about establishing a connection and hopefully working on more stories in the future with this team. There are a number of female-led Diné programs that we’re hoping to shine on in the future, so stay tuned!

I wanted to thank everyone at the Stallion that welcomed me with open arms. Many thanks to Shaun for being such a solid human and extending an invitation and for everyone allowing me to document the weekend.

You can donate to the Silver Stallion and read more about their mission at their website. If you are a brand reading this, reach out to them and see what supplies they need. Silver Stallion would like to thank Park Tool, Bell, and Bikes for Kidz NM.