This is the first installment of what we hope to be a series chronicling our efforts to develop sustainable tourism on the Navajo nation through the establishment of meaningful bikepacking routes and accessible singletrack. In addition, we hope to build a bikepacking community starting with the youth and eventually extending to interested community members.  Our first foray in this ongoing project will be a Fall bikepacking series with local Navajo youth NICA riders. This series consists of three trips; the first two being on Navajoland and the last with Four Corners Guides, out of Mancos, CO, to include packrafts.

The first in this series begins in Kayenta on Sept 26th and ends Oct 31st in Lake Powell, Utah.  The planning started back in July and continues every chance I can meet up with the participants.

Here is the first of a journal I hope to keep, documenting this event.

I always seem to get my best sleep when I am out in nature.  Whether it be on a ground cloth, bivy’d up, or in this case, on a foam mattress in the back of my pickup truck camper at a windmill on the western base of the Defiance Plateau. I had the tailgate dropped and camper with its door wide open and welcoming, as I looked forward to the next day. A day of trail building, riding with friends, and more importantly, a chance at meeting the parents and participants in our upcoming Navajo Youth Bikepacking Series before we set out on our first trip. It has been a challenge answering questions via email, text, and every other way short of smoke signals, so I jumped at the opportunity to join the Silver Stallion Bicycle & Coffee Works crew doing what it does best. Bringing like-minded people together and supporting Dine community outdoor endeavors. The Silver Stallion is a 501(c)(3) organization that is working to lift barriers to industry access and participation by providing a dynamic, systems approach to address the social, geographic challenges to riders of Dinetah (Navajo Nation).  With its Mobile Ride Center and nonprofit bike shop/coffee shop in Gallup, NM the Stallion seeks to open doors with programming “to empower and develop in youth and young adults vocational skills in the bicycle repair and specialty coffee industries.”

The Stallion’s crew for this weekend’s event consisted of former BMC Racing Team racer Scott Nydam from Gallup, Vincent Salabye from Nazlini (who both coach NICA affiliated MTB teams), plus a handful of bike mechanics and volunteers from across the region. Members of their NICA/Dine Composite team will be the first group to participate in our Navajo Youth Bikepack series and I am finally able to introduce myself properly and have face to face conversations about gear, equipment, and logistics. From the bed of my truck, the cool morning breeze carrying the scent of a distant juniper wakes me just before five am in Nazlini, Arizona.  In Navajo, Nazlini means “makes a turn flowing”, referring to a wash that comes off the mesa and makes a 90 degree turn north to meet up with Chinle wash, and eventually flowing into the San Juan River. Nazlini is located adjacent to Canyon de Chelly in Chinle, AZ, which is known for its towering sandstone cliffs and prominent features such as Spider rock, White house ruins, and Mummy Cave. The most current census data of Nazlini shows a population estimated to be about 431 people. 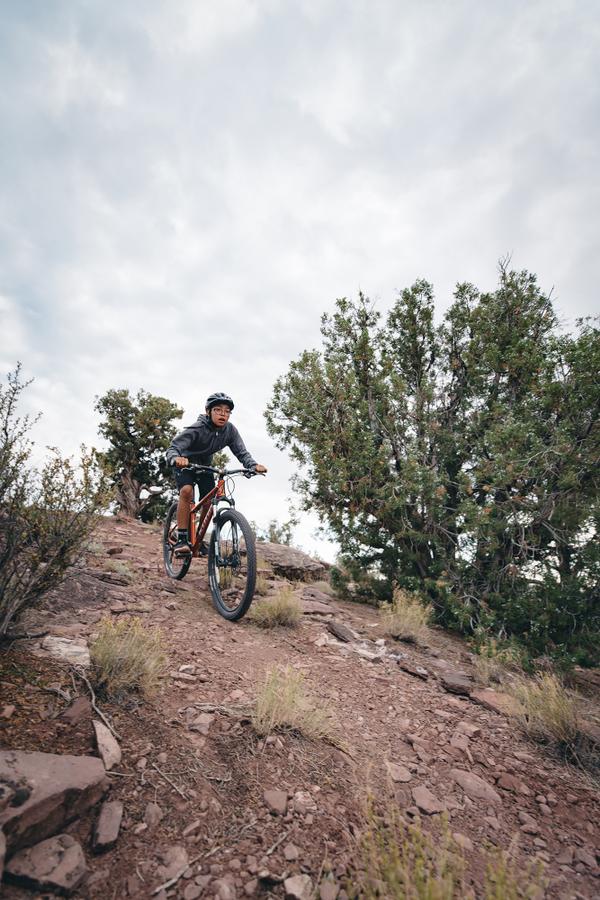 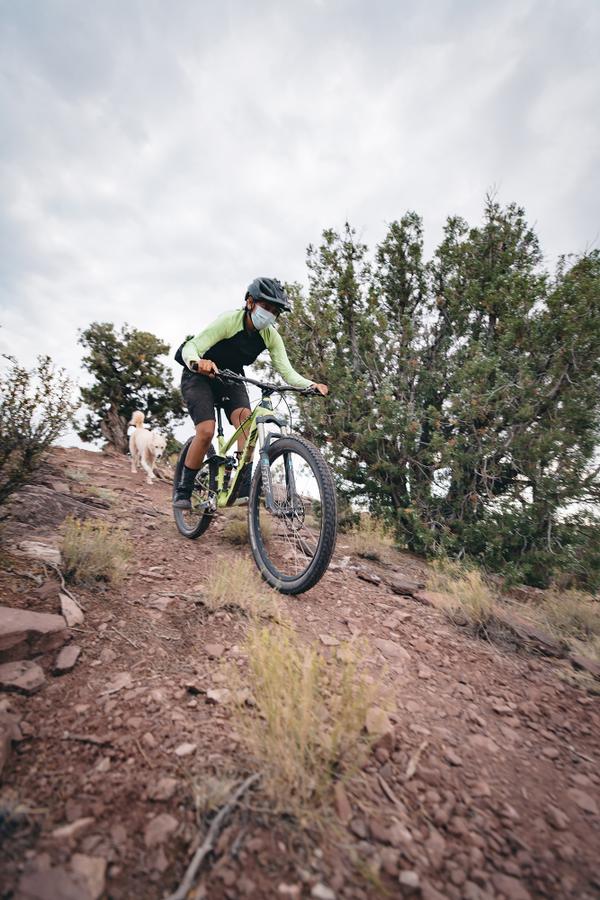 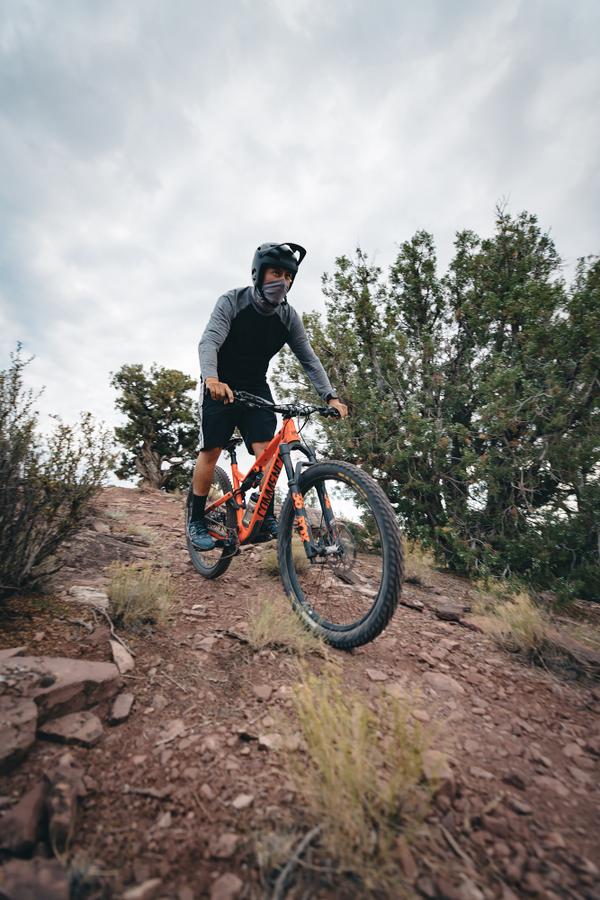 I slowly crawl off the open tailgate to be greeted by Murphy, a rez trail dog whom I met the previous evening. Murphy also excitedly joined us for a quick ride up on the mesa we camped below. It was such a beautiful morning. Right away I noticed all the arroyos I didn’t catch before it got dark. The views consisted of altocumulus clouds hanging in the distance which contrasted the orange and red hues of morning sunlight highlighting red sandstone for miles in all directions. But this morning’s view wasn’t about the cliffs.  It was about the windmill we camped next to and the significance of it all. Plus, I didn’t get good enough pictures of the horizons, as I am a better enduro rider than I am a photographer.  And I have no experience in either.

Coach Nydam described it best. “This is like Sedona, but not all played out.” Many Dine people have fond memories of windmills. They serve as a life source as well as an eccentric swimming hole. Growing up I did my fair share of hauling water from one for cooking, cleaning, and bathing, as we didn’t have running water or electricity.  Our local windmill was several miles from our hogan and when it was time to get water, my mom would always give me a head start on my bike before she met up with me hours later. She would also let me take a dip in the troughs while she filled 50-gallon barrels in the back of our pickup for home. Camping next to this windmill stirred all those memories.

I proceeded to make coffee for both Vincent, his brother, and I. A simple pour-over using a percolator that belonged to my late grandmother.  I have a fondness for heirlooms.

As soon as everyone was up and had breakfast, a bike maintenance clinic soon followed. This is the Silver Stallion’s modus operandi. In addition to coffee and oven-baked pizza; which are both fabulous, they run a mobile bike mechanic clinic. They hope to visit more communities across Dine bikeyah to put on maintenance workshops while repairing community bicycles and also offering up advice on preventing your steed from becoming rusty yard gewgaw. In the short time of the clinic, I witnessed tires being converted to tubeless, new cabling being strung, gears tuned, hydraulic brake fluids being topped off and even coach Nydam hacksawing the seat post of a brand new Trek Pro caliber 6 for its new owner to grow into. After all the bikes were fixed up and ready to roll, a mass start of parents, kids, and community members began a group ride destined for a butte in the middle of town next to Nazlini Chapter house. That location was recently designated as the community recreation spot for hiking, running, and biking.  I was excited to hear that the chapter authorities and community are welcoming outdoor recreation with open arms. If you imagine the Navajo nation like the United States – each chapter functioning like a state with its own local governance – there are 110 chapters on the Navajo Nation. Soon after everyone gathered together at the new location, Coach Salabye ran down the objectives for the remainder of the day: we would be assigned to groups, and trail veterans would walk down what had already been started to scout more lines. Muscle soon followed to reposition two-ton rocks from a natural bridge connecting one butte to another. And, last, the trail crew came through to mark and work the path.  This lasted for a few hours until the crew was directed to “grab your bikes and start burning in the new lines.” While everyone was riding, the local chapter official showed up to bring snacks of steamed corn and hydration for all of the helpers. I got to hear from this elected official about his vision for camping, easily accessible trails, and more trail building. I was immediately jealous.

This is a feat that requires a champion from each reservation town or chapter to do so much leg work. Withdrawing a piece of land for trails requires numerous pricey surveys, in addition to archaeological and biological permission from the locals as well as from anyone holding a grazing permit in that area. All done through many local chapter meetings. I have tried this process to create trails in my community and hit a wall with the land withdrawal. But, here the chapter manager himself was the champion. He did all the leg work.  And hearing that a chapter on the eastern end of the reservation was in full support of outdoor recreation gives me hope. After a half-day of trail work, we all grabbed our bikes and went out to burn in the new lines. On one lap, the chapter manager joined us and was super grateful for the progress and invited us back for more. 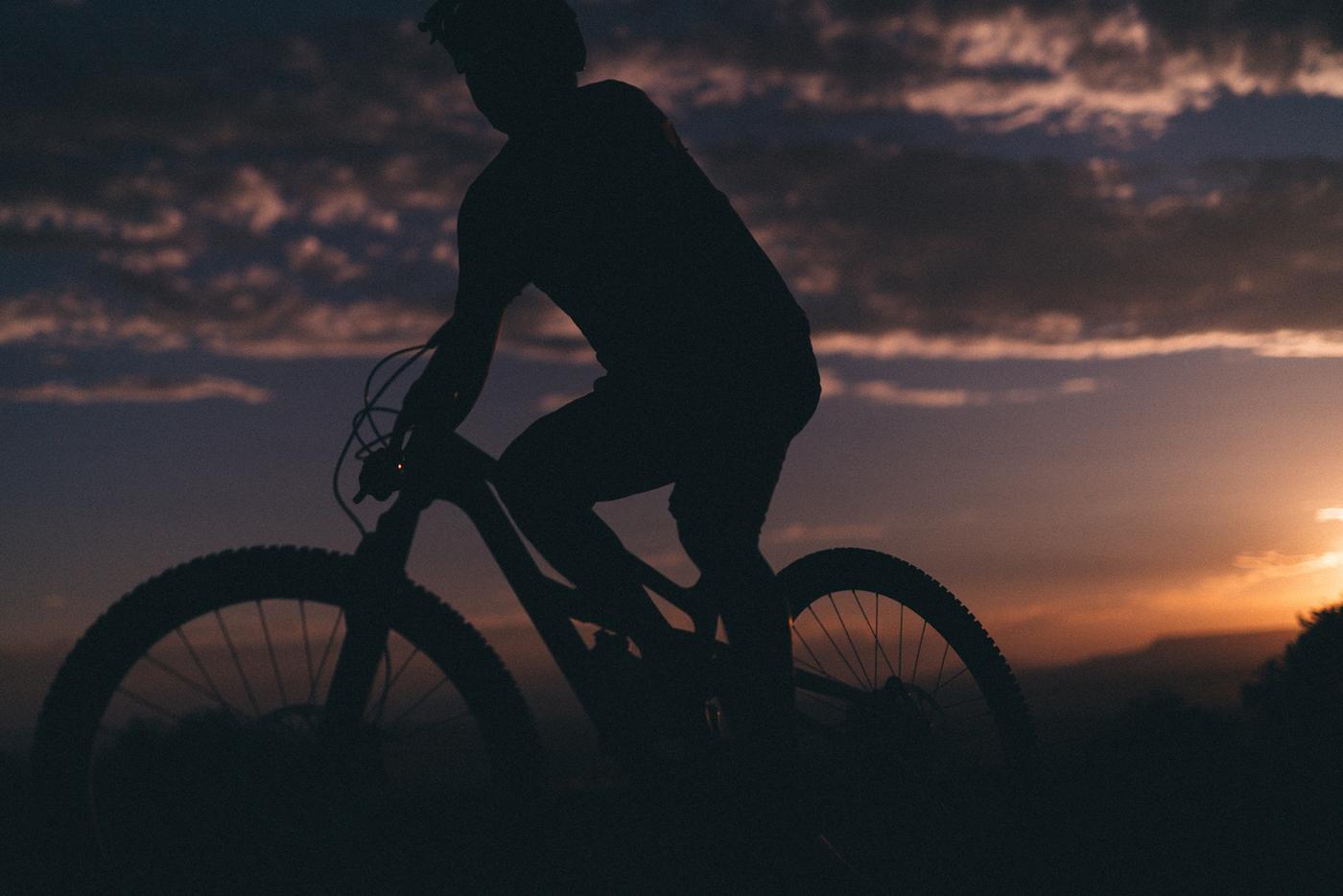 Although I had a great weekend meeting other natives and riding bikes, I left with two takeaways.

First, I needed to rethink the routes I had in mind for our upcoming trips, as the kids interested in learning to ride with loaded bikes ranged in age from 10-15 and were new to biking.

Second, gear. All of the participants did not have any packable sleep systems nor did they have any lightweight tents or reliable shelter.

I discussed this with my partner Nadine when I got home and we decided to lend our personal equipment to the kids since we are just excited about going out later this month as they were.  But, first, we would have to test our gear beforehand.  Our down sleeping bags are meant for adults. Would those kids get cold with all the extra space in them? We decided to recruit our nieces and nephews and find out with a Sub24 this coming weekend. This will test our theory and gear, so we can better prepare those kids for bikepacking. At least with family, we won’t feel too bad if this test run is a little cold and miserable.