For Fail 12 Ryan le Garrec raced the first edition of Gravel Birds, a 750km bikepacking race in Portugal’s largest region, Alentejo. For Ryan, it was initially more about the idea of fast touring a well-curated route than properly racing the course. The region is characterized by a beautiful mix of rough hills, coastlines and small deserts inland. Its arid section, down South and just over the more famous Algarve, is often ignored by tourism yet hosts some of the most incredible hidden gems of Portugal and probably its best gravel tracks too! I hear a car approaching, it’s been coming slowly since forever. Here the hills are isolated, inhospitable, irregular. Those giant monsters with broken backs already fell asleep a century ago.

Rocky large tracks are surrounded by spiky and aggressive bushes. The nature around is not as lush as it’s confused. Messy greens. Uneven shapes. A sort of crazy architect shuffled his deck one too many times before drawing the landscapes around here. Tabula rasa and overload, in no particular order. 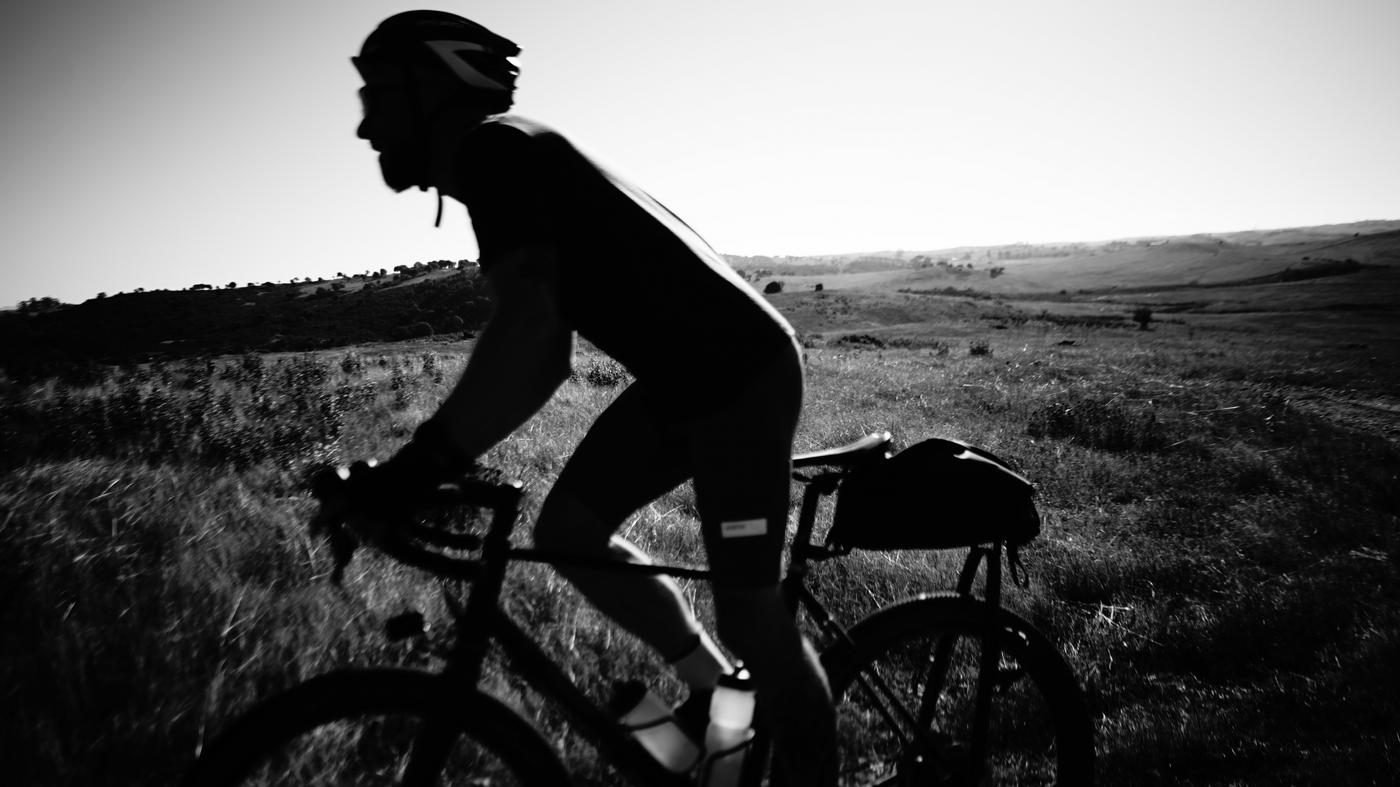 Evening came, with a loud silence after the storm. A quiet blessing before the night. It’s not really reassuring though. The sky is crowded and the Sun is dropping, bleeding out and all over this mess. Am pushing my bike up this hill since a thousand years now.

I hear the car approaching, slowly but closer. The drops stopped falling but the rain is still suspended in the air. I can see it now, avoiding rock after rock. Its a small red box, one of these tiny cars you can get without a license. I find it hard to compute how it got there and what it’s doing coming down this way.

We lock eyes for a second. The old man driving with a cigarette in his mouth seems as surprised as me. What am I doing here in this beaten part of the land, with my dandy looking bike?

Alentejo is pretty secluded and some parts could remind you of a desert, others of an ocean of roughness made of browns, greens, yellows and reds. A thousand shades of sands and soils. A million hills in this region, and they’re harder to ride than the tallest mountains of the country.

You won’t find a sound or a soul for hours but you’ll soon be able to hear the echo of your heart,
at night when crossing those river beds on your very own. Hidden by the trees in the small valleys, it would take an eternity for anyone to come and find you here. And they’d have to find a good reason, too, cause there’s no network for you to call on with the panic button.

The race feels far away by now, the circus left the town a week ago or so it seems. I have lost track of where I’m at and where I’m heading. For a moment I totally forget about the race. I look deep in the dark and I see nothing else except what is there in front of me, rocks and thorns, crests and quests, holes and hopes.

In no particular order. Tabula rasa and overloads. I reached the village a few hours later. In the middle of the night, I went and laid myself in the public toilets, made a cocoon out of my bivvy and fell asleep like a baby. Well, like a baby with no dinner or plan for breakfast. Racing…Racing what, racing why? The very word “race” always made me think of rats. The rat race. The one most of the population on this planet is forced to race. Testosterone and pissing contest, measuring yourself, being the Alpha, egotestico and killer instinct. Racing was a thing that never appealed to me. I thought I was not competitive or just didn’t want to be. It looked a bit dull and vain. 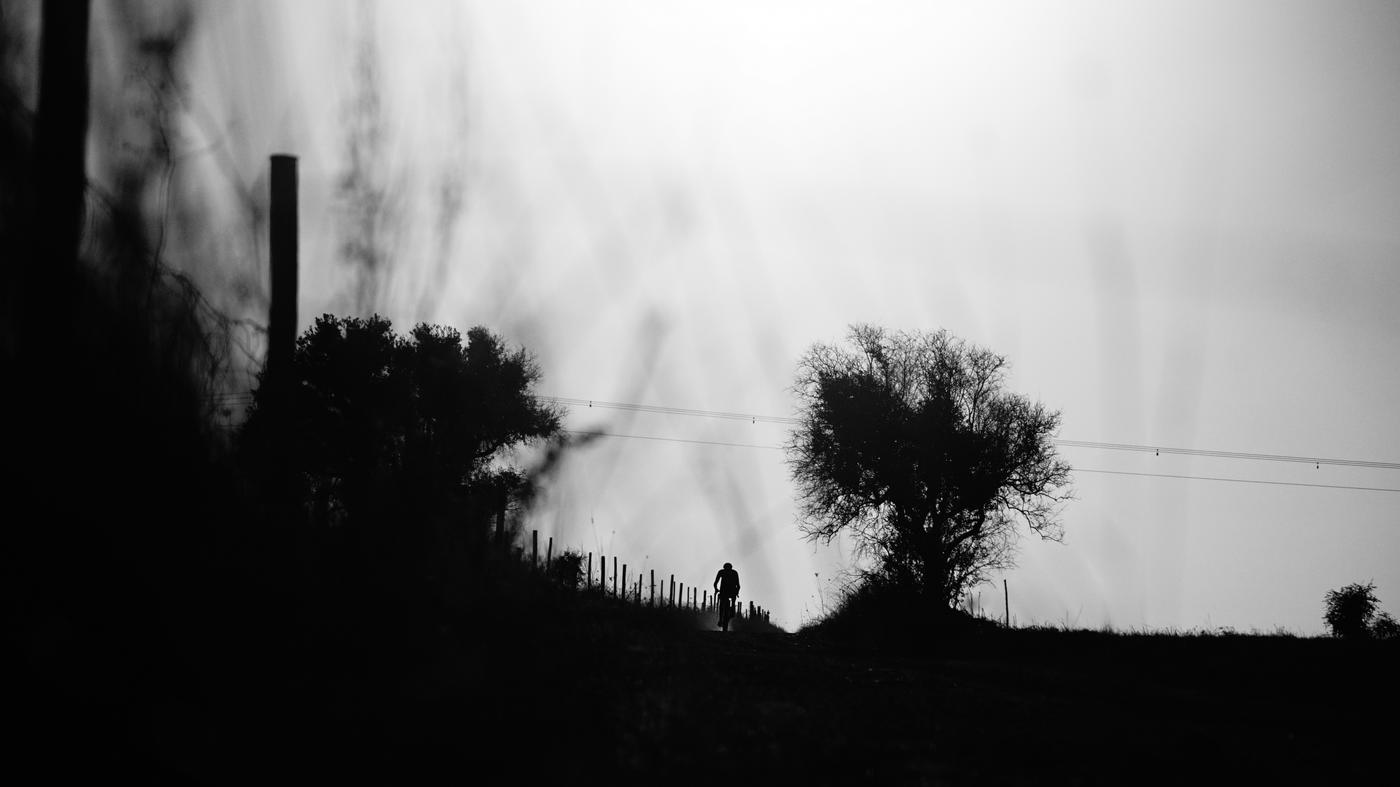 But here is the thing, when it comes to bikepacking races, five percent of the racers are racing for a spot on the podium. Twenty hope to make a good position, another few have dreams to get to the top ten, twenty, fifty or just top something. A lot just wanna finish this thing. Most of us are after something else than racing or winning.

The best part of these races are the stories we’ll share later. 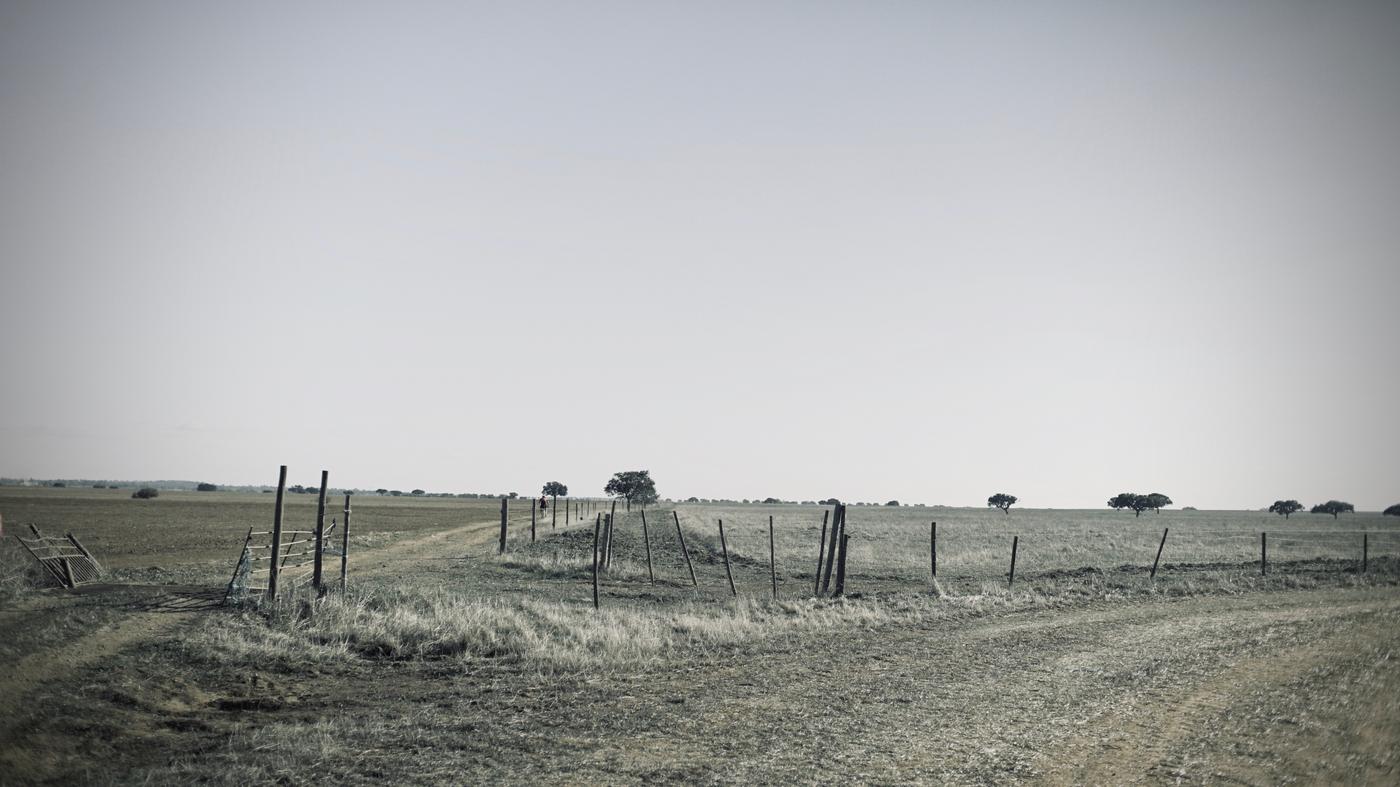 Well I’ve been here before. I sat on the ground and I ate from a grey can. Yeah I been here before and I did this before. Life on the road is like a joke. You do things that look awful to anyone and you do it as a holiday choice and yet you get the biggest satisfaction out of that sardines breakfast on a dirty curb, or that parking empty spot at the old gas station. Who needs a terrace and a view on San Martino when you have five pumps, fifteen exhaust pipes and the lovely smell of gasoline in the morning. A triangular stale club sandwich in its plastic box and an energy drink to pour in your bidon. Back at the start I should have known, once everything goes wrong you can’t complain anymore and you shall just as well be mute and still and wait for it to pass and shift. And when it does, don’t dive in too deep, take a deep breath and look around you. I should have known but I went deep, and all through the night, and when I woke up on my bike, the next morning, it was too late, tomorrow comes too soon and I wasted the night. Am now a ghost in my own muppet show. Am a dancing lullaby trying to stay awake.

The night wins at all cost.

The night became all white and grey, nothing feels real, yet it’s too real. The end of this track seems like a bunch of roundabouts in a tiny desert. I am tangled up in my own trap and looking for a way out of the spider web, but all threads look the same and the escape is but a joke, secretly hiding in the middle of it all. The exit is inside. It always was at the middle of all angles. The car slows down and he looks deep in my eyes, he says something in Portuguese that I don’t fully understand. “Are you lost?” I think he said. “No, no, am good! Thanks!” I am lost though, completely lost but still on track. The night takes me in her arms but I don’t know if she’s gonna embrace me or strangle me. It’s alright I tell myself, just keep moving and it will be alright. You’ll find a place to sleep or carry on until you stop.

My last day’s route and probably the most gravel-friendly part of Gravel Birds: