Expectations on the Black Canyon Trail

Expectations are an interesting thing. In a way, dreaming about something is often what motivates us to do it. We dream of what we can achieve, or of a potential adventure, and the belief that it could happen excites us enough to go out and prepare in the hope of making it a reality.

I’m a professional cyclocross racer, and those dreams and expectations I have for myself guide my everyday decisions and allow me to push myself above what I think is possible. Just thinking about what I want to achieve gets me excited, but also a little bit nervous. I want to live up to my own expectations, and I so badly want to make those dreams a reality. Yet, those expectations allow me to set a standard for myself; a standard of excellence that I need to bring to each training session, making me inherently better than if I did not have those high expectations.

But there can also be a darker side to expectations: when an unrealistic picture you paint in your mind ends up being shattered by a much more difficult reality than the one you had planned. 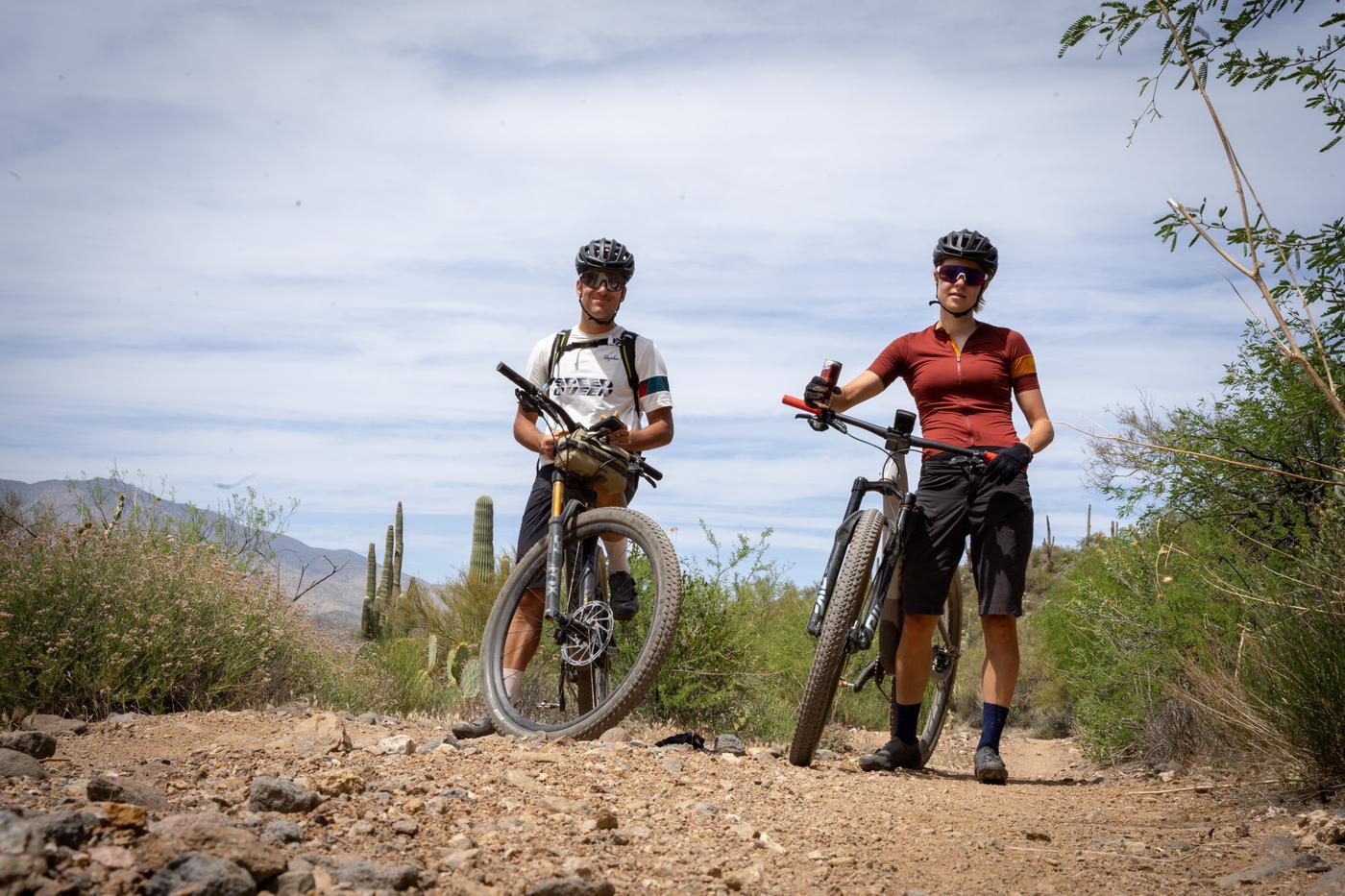 For many years, my boyfriend David and I have been doing the drive between Tucson and Sedona to ride our mountain bikes. Ever since we started driving there a few times per year, I’ve been curious to learn more about this mysterious trail that we can see winding through the mountains from Highway 17.

This mysterious trail happens to be the Black Canyon trail; a 76mile (122km) singletrack trail starting just outside Spring Valley (East of Prescott) and finishing just North of Phoenix. A 76mile trail that descends twice as much as it climbs and that goes through amazing desert landscapes. It sounded like a pretty sweet ride, and I was really excited about the idea of taking a trail — rather than the highway — to travel partway back to Tucson. 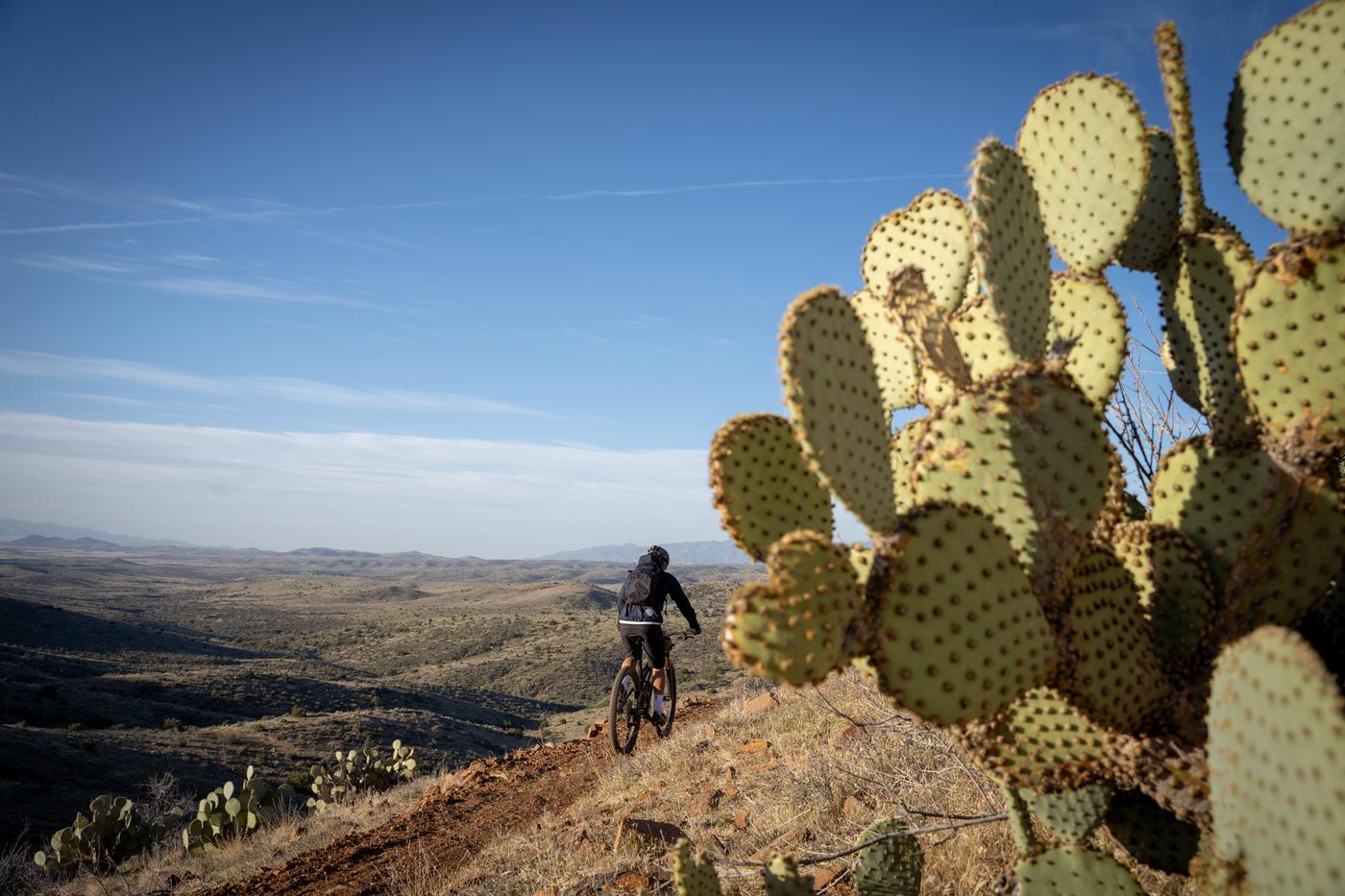 Last month, as we were finishing a training week in Sedona, we decided that if we were ever going to ride the BCT, our best shot was to do it the next day on our way back home to Tucson. My dad was with us in Sedona and he generously offered to drive us to the start of the trail and pick us up at the end, all while taking care of our dog Mia during the day. It couldn’t be more perfect! We only did a short ride in Sedona that day to make sure we had time to wash the bikes, pack them up, and drive to a hotel in Camp Verde where we would spend the night before the big day.

Admittedly, we went into the adventure a little bit underprepared. I’m a professional cyclist and my husband trains with me all the time, so physically, we felt ready to tackle the challenge, but in terms of logistics, we had only read a few blog posts to know what to expect. However, all those blogposts kept praising the fact that this trail was almost always descending, and therefore wasn’t too hard. 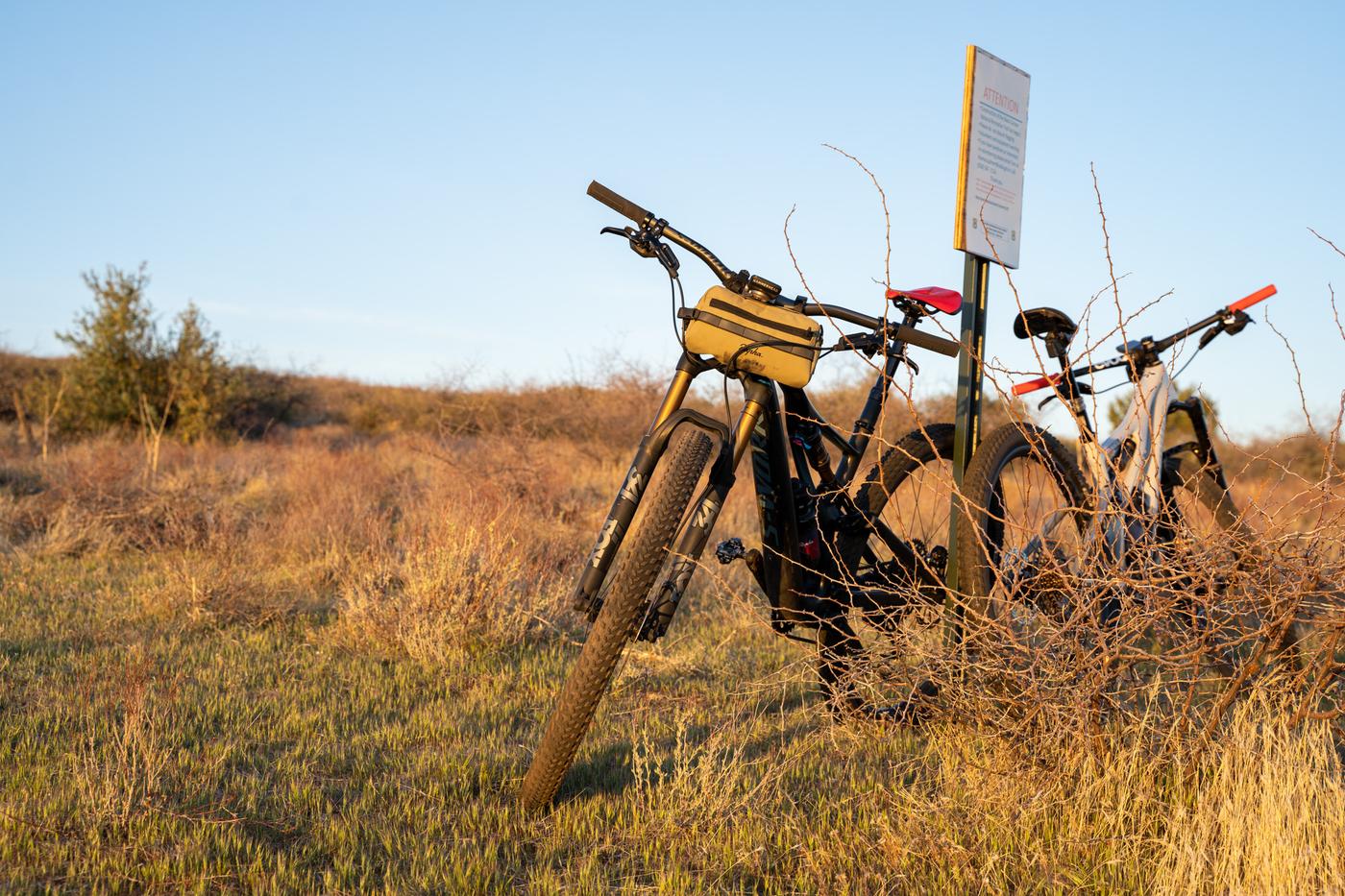 Given what we had read, our plan was to do it in one day, and quite frankly, it was our only option since we did not have any equipment – no light or sleeping bag – to allow us to spend the night, or even ride in the dark. And to be honest, we didn’t think it would take that long to ride 76mile of downhill single track.

We headed out at sunrise, and started conquering the miles. The scenery was beautiful and the light made it look even prettier, so in the first few hours, we stopped several times to take photos. The miles were flying and we were having a blast riding the flowy trails. At about 30miles (48km) into the ride, we hit a trail so fun that we couldn’t stop smiling. It was going up and down and was winding through rocks and colorful flowers over several miles. When we thought it couldn’t get any better, we entered a canyon and started going down into it on a narrow and super flowy trail that was edging the mountain and offering majestuous views of the canyon. We were having a blast and making good progress. 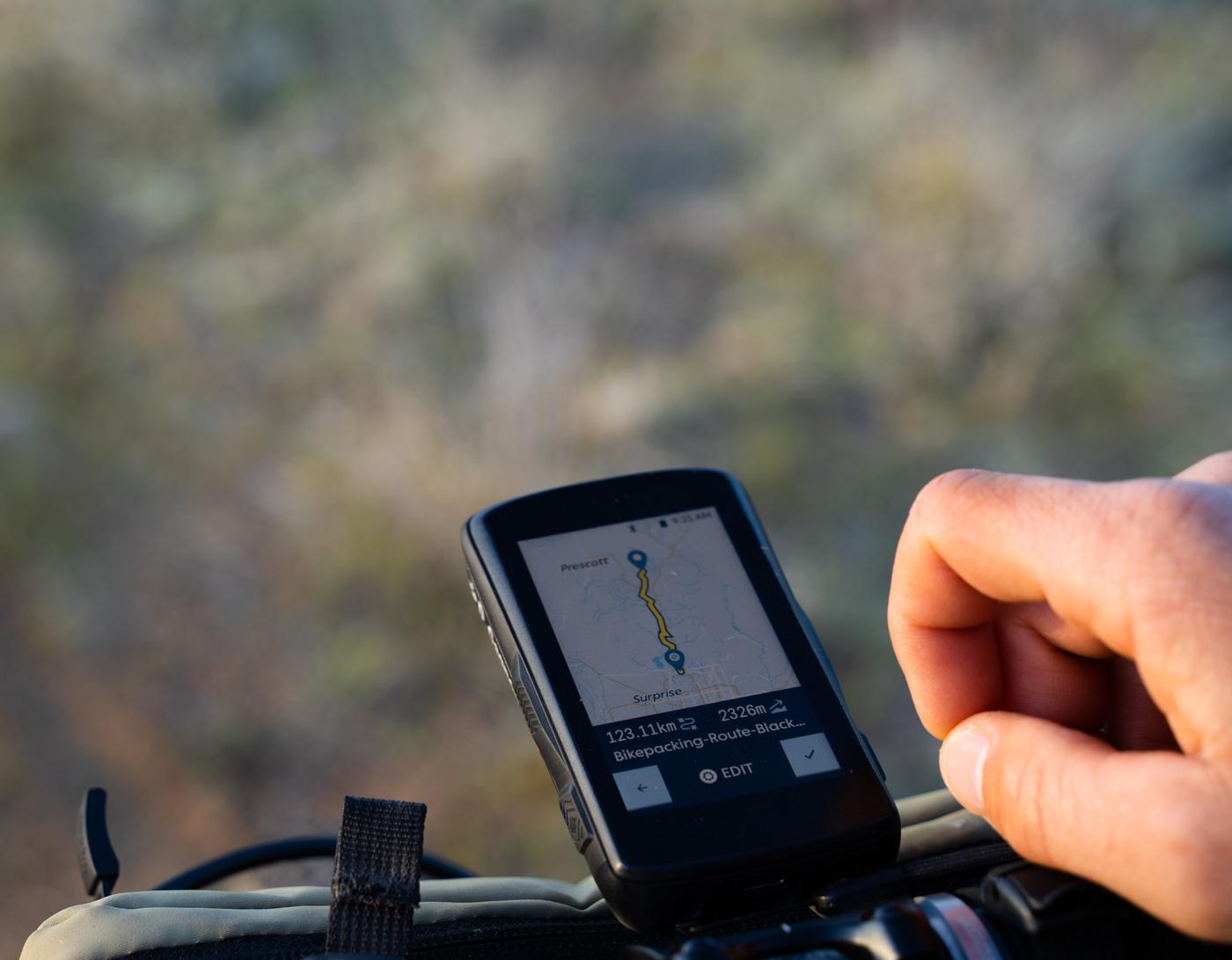 As we exited the canyon, my Karoo computer said we had ridden 40 miles (64km) in about 4h of ridding time (5h since we started). According to the maps we had seen and read, this was supposed to be about halfway into the route, so we felt good about our progress. I decided to take out my phone out just to see where we were at on the map so I could update my dad, but what I saw on the map slightly crushed me inside. The map showed that we were not even close from being halfway in…and we had been out there for 5h already. Suddenly, we knew we had to get going and stop taking so many photos if we wanted to come back before dark.

The maps we had read also indicated that the only refuel point on the route was supposed to be around mile marker 43 (km 70). So we kept paying attention to see a sign indicating where we could refuel as we had both run out of liquid. We were pedalling at a good pace and expecting to see a sign after each switchback, but it wasn’t coming. The trail was climbing a good bit at that point, and our focus was starting to dwindle, which made the rocky trails harder to navigate. It was at mile 57 (km 92) that we finally rode over the crest of a mountain and saw a fork in the trail. Finally! The refuel point was within reach! We weren’t especially excited when we realized that we had to go down the mountain we had just climbed, cross the highway, and ride to the gas station just to get water, but we also knew it was our only chance to refuel. Plus, by that point, if there was one thing we had figured out, it was that we couldn’t trust the maps we had read! So who knew how much longer we had to the finish?

We refuelled at about 2:30 pm and texted my dad to tell him we would take longer than expected. We then got back on the bike and rode 30mins to reach the point where we had left the trail.

We increased the speed as the single track climbed for a long time after the refuel point. Although we were suffering — and dazzled by the fact that the trail kept going North while we were trying to head South — we were equally amazed by the beauty of the Black Canyon’s walls that were literally shinning as they were hit by the sun.

We hit the 75miles marker (120km) right around golden hour, meaning the sun would soon go down. It was an interesting feeling. We were not necessarily feeling the suffering anymore — although my heart rate had been hovering around 170bpm for a while —  but for the last 9 hours, we had been riding only single track trails, and our brains were starting to feel numb to it all. We were really just going through the motions, and pressing on the pedals to bring us to the next switchback or over the next hill, and the next, and the next, still not knowing if this would go on for another 40minutes, or another 4 hours. 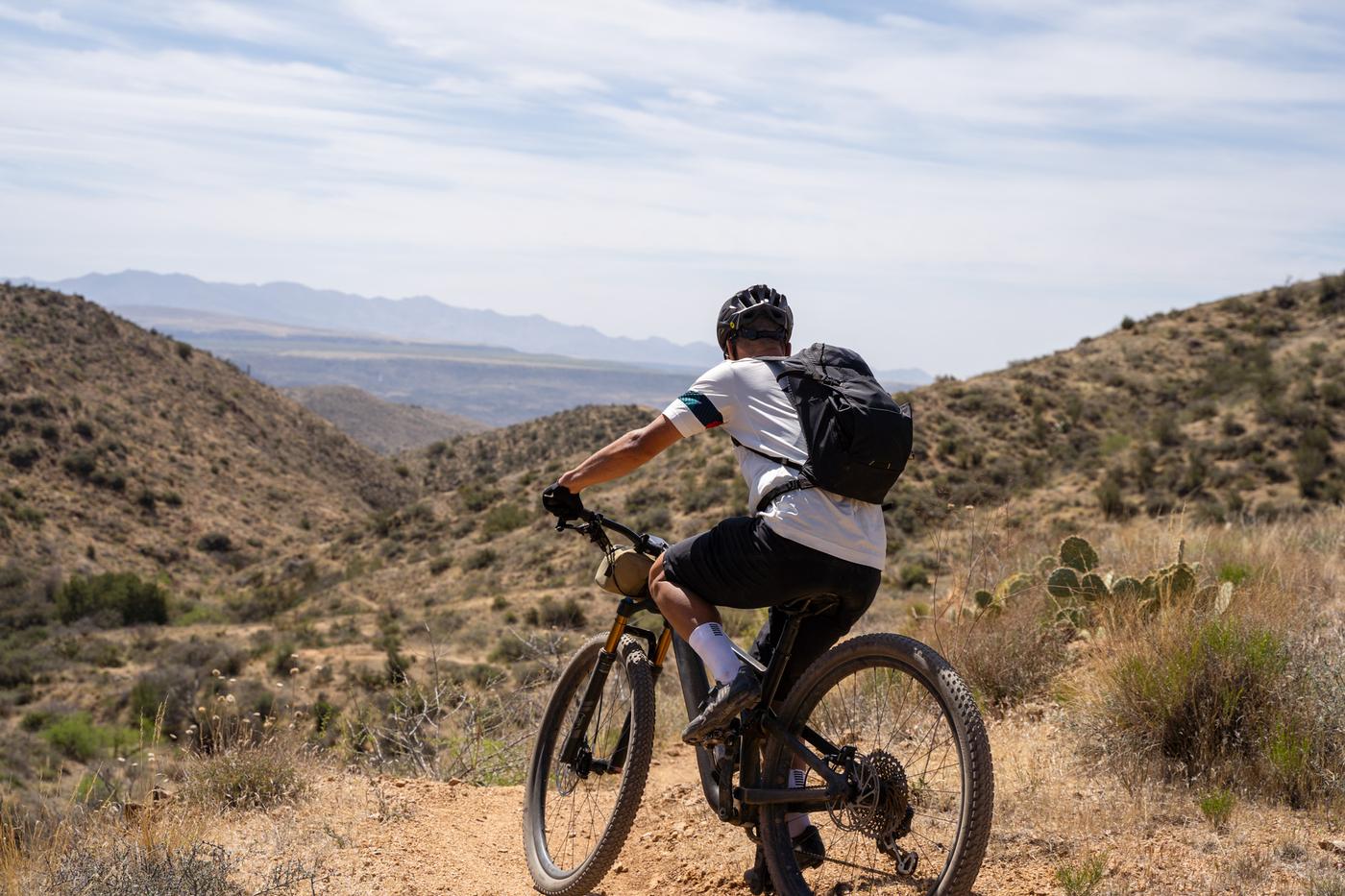 I realized at that point how double-sided expectations can be. We had expected this day to be 76miles of mostly downhill riding. Now, we were already at 83miles (135km), the map on the phone didn’t show that we were close to the finish, and quite honestly, there was no free or fast kilometres because it was 100% of rocky singletrack. Don’t get me wrong, the trail was amazing, but it was much harder than expected and I felt bad for my dad and our dog Mia who I knew had been waiting for us at the finish for quite some time already.

Despite all this, we were both in good spirits. We knew that the only way to get through this was to stay in the moment, and not really think about how close or how far we were to the finish. After all, it was all about the ride, not about the destination. Plus, I’ve been in similar situations many times before…this was exactly like when someone attacks in a cyclocross race and you decide to follow the move. You hurt so bad and think you can’t possibly hold that pace for 3 more seconds…except that you often can. And the only way to get through it is to focus on one breath or one pedal stroke at a time, and next thing you know, the pace slows down and you managed to drop the group. This was exactly the same thing; one pedal stroke, one rock at a time.

It was now 5h30 PM, and the trail was filled with super loose rocks. As we climbed a hill, the rocks were rolling under our tires; I was leading in front of David when I heard him scream. He had just rolled on a rock and fell on a Prickly Pear Cactus. I ran to him to try to help. Here we were, almost 12h into this day (10h of riding), both exhausted, but on a mission, and I was plucking hundreds of cactus needles from his butt. We jumped back on the bike fairly quickly and hit the gas once more, this time, only thinking of my dad and Mia. I felt a lot of gratitude towards them and I was excited to see them. It was still endless switchbacks of rocky trails until we finally hit a longer descent that brought us to a fire road. Our first free miles of the day! Suddenly, we knew we weren’t far and increased the pace once more as the sun was almost fully down. For a good 20-30 minutes we drilled the pedals on alternating fire roads and flowy single tracks. We crossed a few trailheads which kept tricking us into thinking that this was it. Finally, far in the distance, I saw my dad’s car. David started screaming, and I did too.

We had done it. I was so happy to see my dad and Mia who welcomed us with the biggest smiles, open arms, and a box of fresh donuts. What a day it had been. We sat on the ground for a minute to take it all in, just as we saw the sun finally set.

At times, this was one of the most beautiful trails I’ve ever ridden. At other times, it was a gruelling hard experience of riding on long hills plastered with loose boulders. It was much more difficult than what we had expected, but what are expectations anyway? The truth is that what we expected doesn’t matter. What matters is what we experienced along the way. The trail is what it is, not what it should have been, and it is perfect that way. In the end, all the ups and downs that we experienced on this trail are exactly the reasons why we wanted to do this adventure. The fun parts make you smile and allow you to keep going, while the tough parts make you grow and learn about yourself. Once it’s all said and done, what you remember is how you got through these tougher times, and how much you laughed when you were exhausted and didn’t think you could keep going.

As I was sitting on the ground, contemplating our day, I was so tired that I almost wanted to cry, and I realized that it was exactly this unique feeling that I was after.

I’ll remember this day for a long time; this trail exceeded our expectations in so many ways.