Hanah and the yard sale.

The desert. Mountain bikes. There are actually very few places where the two overlap both at any official or extensive capacity. Which is strange, seeing as how the sheer scale of the deserts in California can be lost while looking at a map. There has to be a trail network worth riding in there somewhere! It takes up so much of Southern California! In my experience, this scale is only decipherable after attempts to explore, document and traverse. Otherwise, you’re just looking at expansive land, with a few mountains scattered throughout.

There’s a lot that Southern California got wrong, but setting aside expanses of unadulterated high desert is one thing it got right. Riding bikes through said landscape, only to culminate in a city filled with big box architecture, sports cars and golf courses supplies the much-needed reflection to further appreciate these experiences.

That’s the Palm Canyon Epic; one big juxtaposition, or macro juxtaposition if you will. From Piñon, Juniper, Chaparral, and Sagebrush to Cholla, Agave, Barrel, and Beavertail, the flora and fauna you experience on this ride is unlike anything I’ve ridden before. I’m always on the lookout for desert experiences on the bicycle and let me tell you, the feeling you get while looking for a place, or a route to ride, is equivocal to the vastness experienced while actually there, pleasantly pedaling. Or hell, even pedaling in pain can be fun too. This route has it all.

Luckily, on this ride, there were eleven of us, making for a truly unique excursion into the wide openness that is the high desert. 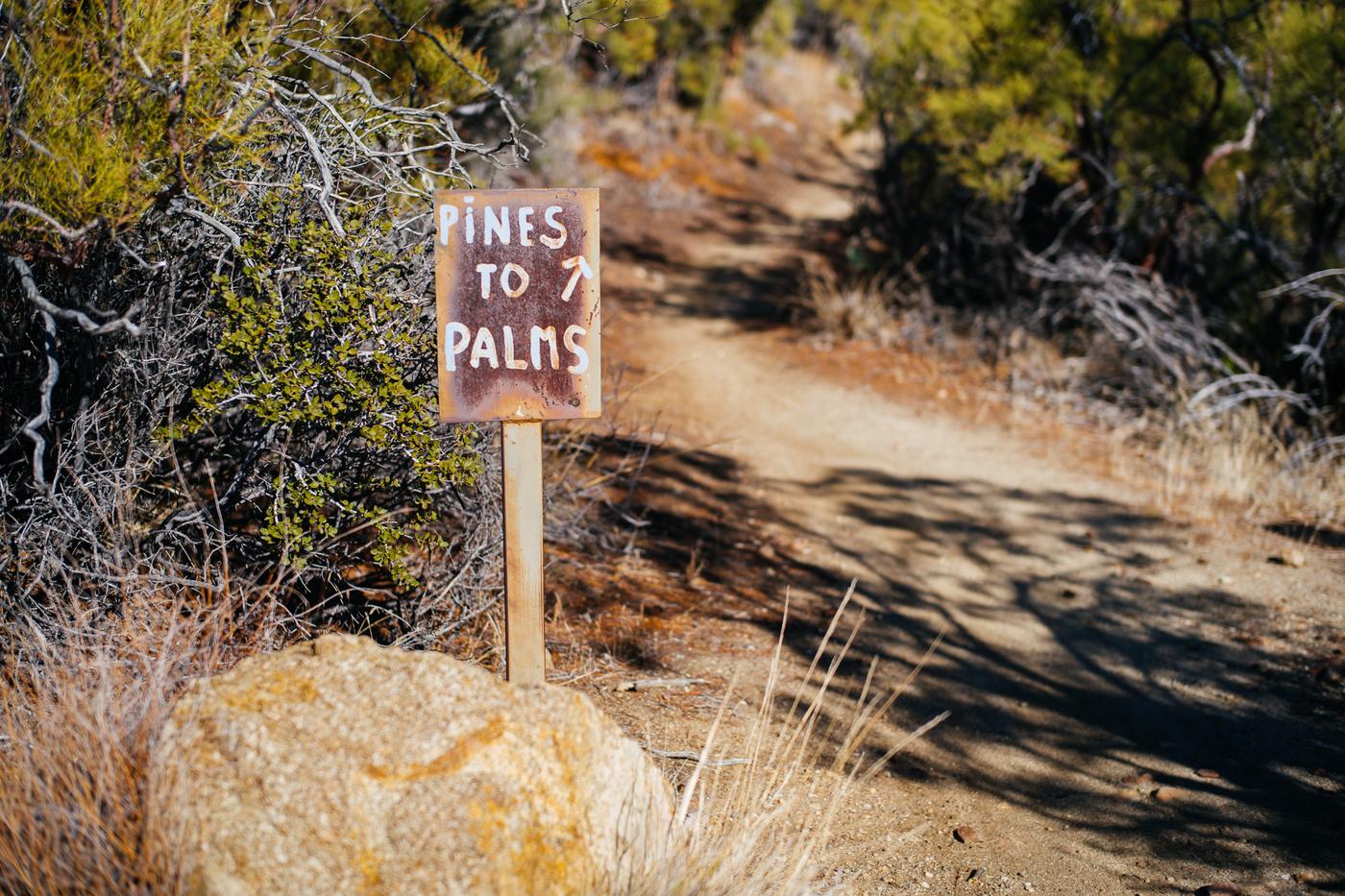 Like most of my cycling experiences in the greater Los Angeles area, it was prompted by the ambitions of Kyle Kelley. What Kyle lacks in the ability to plan for an outing, he makes up for in his ecstatic enthusiasm for riding new trails. Case in point with this ride. We always try to get out of the city on Wednesday, when Golden Saddle Cyclery is closed, but ultimately usually stay in Los Angeles County. Sometimes, however, we can rally the troops and give it a true, heartfelt go.

This route begins off Highway 74, at a turnout dubbed “Ribbonwood” on Google Maps, down at the end of a dead-end road. From there, an interconnected network of trails meanders through the high desert before culminating atop of a black-diamond ridge trail that dumps down into the borderlands of the city of Palm Desert.

Last week, I casually brought it up: let’s camp near the start of the ride on Tuesday night and figure out a way to shuttle the route, since pedaling up Highway 74 for 30 miles back to the start seemed like a bad, if not impossible feat. Remember, we have 11 people with us, surely a shuttle should be easy enough. Well…

Nothing good is easy. Ever. Do not attempt this ride without at least 4 liters of water and plenty of food. Do not attempt this ride without a GPS of the route, or at least a good map, or even someone who has ridden it before. Do NOT, in any capacity, attempt this route in the warm months. This trail neighbors tribal land. Please be courteous and follow the signs for mountain bikes. Respect the natives of this land, we owe them that. As with all rides, please, be smart, plan ahead and obey the 7 leave no trace principals. Motivating 11 people to get rolling in the cold, early morning air takes some finesse. Not even coffee and breakfast tacos were helping. Granted, one by one we awoke at our own rate after our collective camp alarm went off at 7 am. Soon, everyone was ready to roll to the trailhead by 9:30 am. That’s the thing about desert riding, even in the winter, you want to start early as possible. When the heat of the day comes, you want to be through the hardest part of the ride, which on the Palm Canyon Epic, is smack dab in the middle. 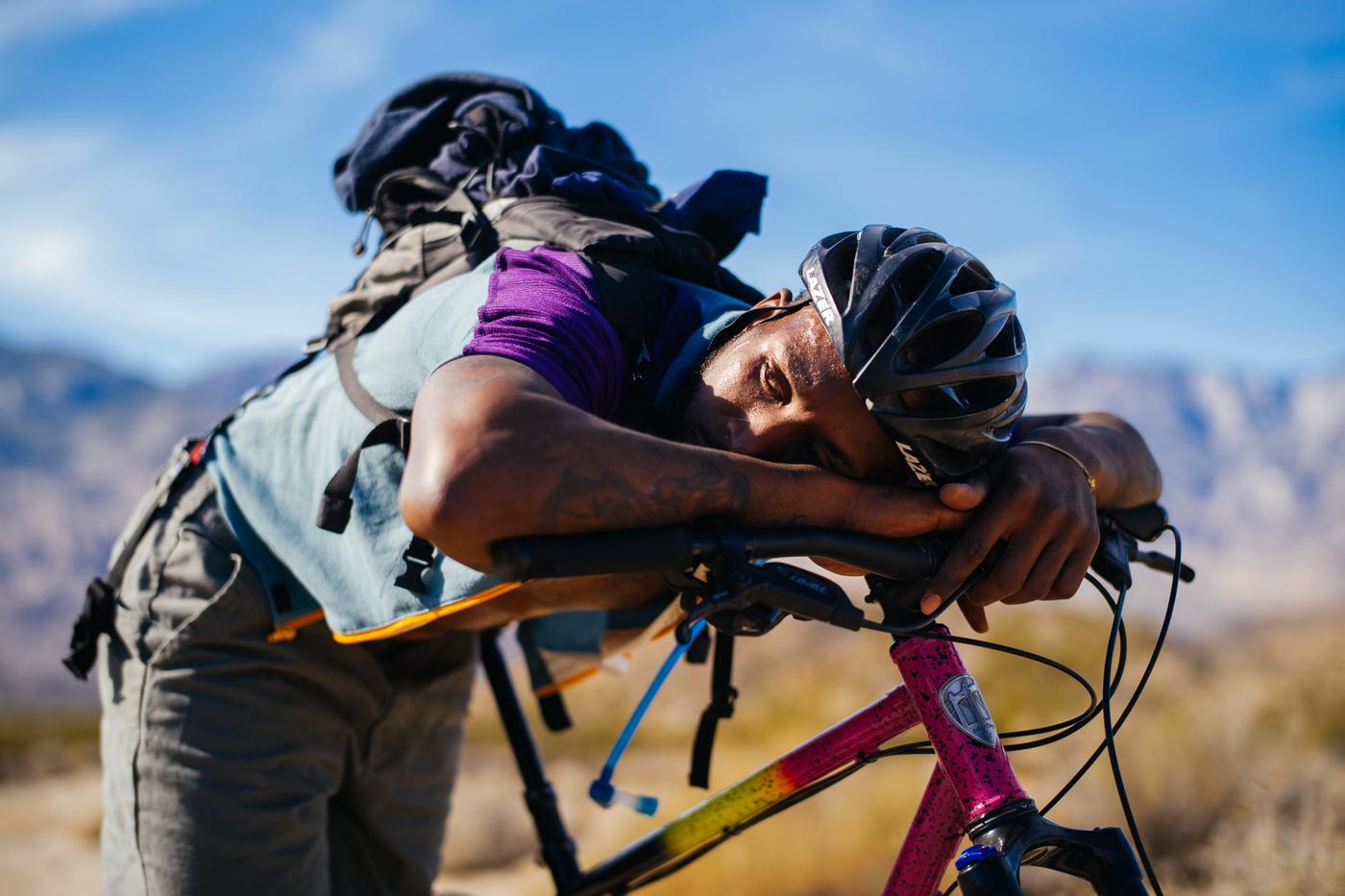 There we were, getting kitted up to take on a route that is often described as taking 6 hours to complete, with no water refill spots, a 3-mile wash that without rain, can be a hike a bike, and to top it off, two of the riders had no idea what they were getting ready to undertake. Mick and Johnnie got brought on last minute. Johnnie had ridden mountain bikes once before, up in the Chilao area and spent a majority of his time on a bike riding his track bike through the city. Mick had mountain biked before and has plenty of off-road experience, but is still pretty green when it comes to these backcountry excursion style rides. As we were going through everyone’s water and food supplies, we realized Mick and Johnnie hadn’t come prepared to carry enough of both. Luckily, with a group this size, everyone had something to spare and we were rolling by 10:30 am. Immediately, we plummetted through Piñon and Juniper forests, over well-built berms and jumps, down rocky chutes and around tightly-sculpted switchbacks. This part of the ride was completely unexpected and completely welcomed by all of us. Even Johnnie was sending it. Exhilaration through the high pine forest was followed by the immediate presence of the prickly and pokey variety. For miles, the Spanish Bayonette, Desert Agave and Jumping Cholla had been trimmed back, saving our arms and legs from the inevitable stratches, as long as you stayed within the lines and confines of the trail.

The problem is, Johnnie is new to mountain biking, so his arms and legs suffered the most, having looked like he was attacked by a cat or a weedwhacker.

Once the initial descent was over, we hit the infamous 3-mile wash, which climbs up through the valley, racking up over 800′ in a long, straight, false flat. Luckily for us and hopefully for you, if you choose to take on this ride, it had recently rained, so our tire tracks moved with little effort over this otherwise loose sand. A creosote bush became our mid-way ride break, where we each pulled out our much-needed sustenance in the form of a variety of items ranging from apples with cheese, to rice cakes and Nutella, sandwiches and other snacks. At one point, Johnnie asked me where I got my food from, implying he didn’t bring any, so I obliged and handed him half of my wrap and some cookies. The recharge gained from our lunch stop brought the morale of the group up considerably. Not that anyone was cracking, but the chatter and body language of everyone had been uplifted. The last half of the trail was my favorite. Remember that issue of scale? It’s easy to lose it in the desert when you can see miles upon miles in the basin. It’s not until you gain a vista or a projection of sight from atop a ridge that scale is reestablished. For us, it happened at the Hahn Trail Lookout. With Big Bear as our backdrop, with its snow-capped peak pushing over the neighboring ranges, we could barely make out what looked like a series of squiggles in the rocks, brush and sparse Chaparral. Riding a bike, at speed along the squiggles provided me with tears of joy, as I feel connected to the high desert more than any place on Earth, especially when the trail became rocky and steep again. When consequences abound on a trail, you truly feel alive. As a photographer, documenting interestingness on rides takes a lot of mental work, especially with a manual focus rangefinder and when you’re the navigator. My brain was beginning to tire. So much so that I didn’t even bother photographing any sunsets, or landscapes with the 135mm lens I lugged along with me. In fact, the rest of the ride was a total blur. I vaguely recall steep switchbacks with consequence, fleeting desert sunlight, peeling ridge lines, and friendly hikers greeted our now ragtag group back to civilization. I thought I was ready for it mentally when we saw the sprawl back up against the desert, but it didn’t officially hit me until I caught a whiff of old lady perfume and almost gagged due to its volatile chemically aroma. 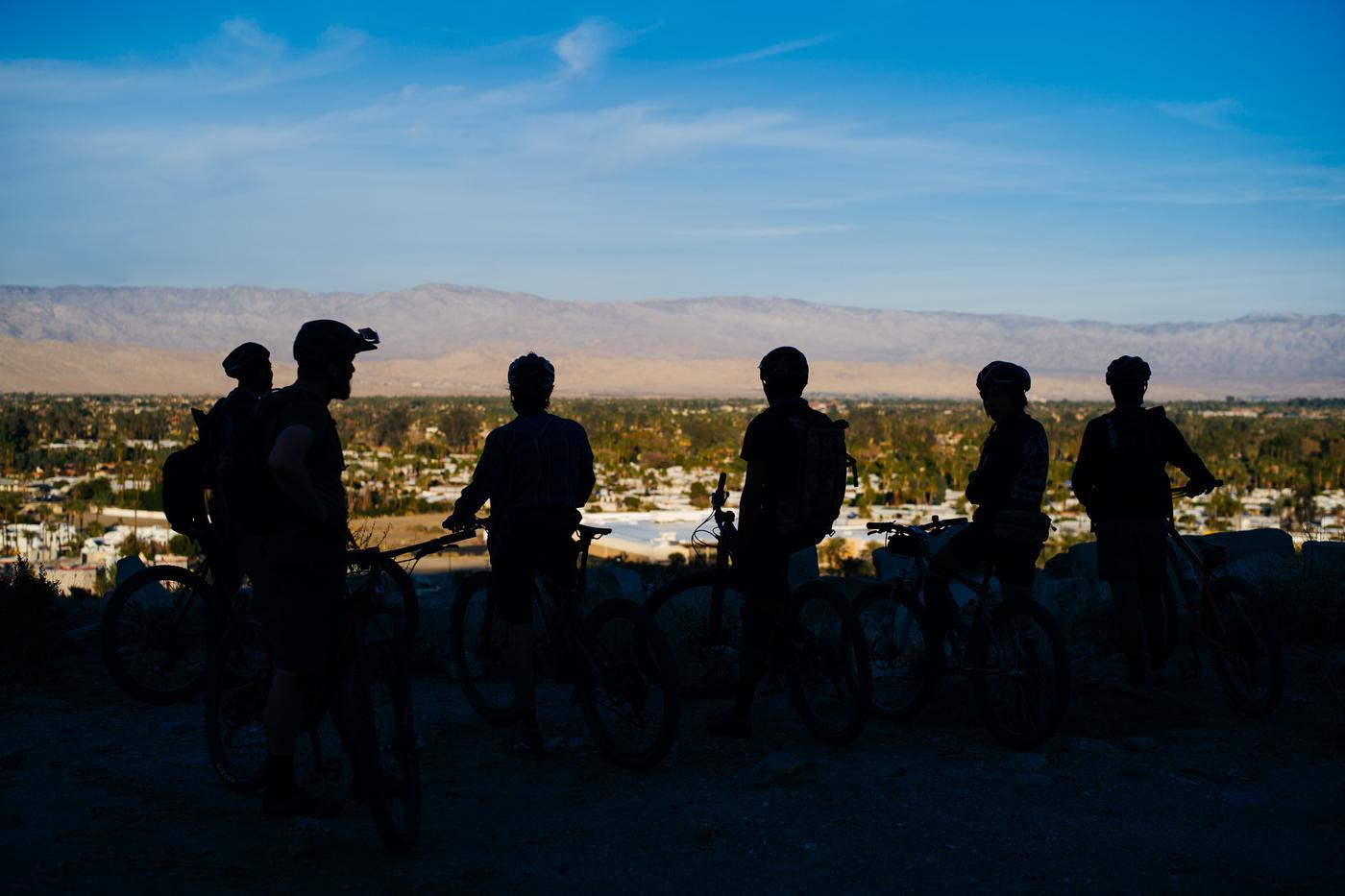 The Vons parking lot was a strange desert oasis, filled with customers who were perpetually stuck in slow motion and more of that desert chemical aroma. Water and protein were my main objectives, as now we had to figure out how to cram eight sweaty, broken and bloody riders into a Honda Fit and drive back to the start where our vehicles awaited. If you’re going to do this ride, either track down a shuttle service or be smart and leave an actual passenger vehicle at the finish. We misplanned this detail, realizing that we all sleep in our vehicles and couldn’t ditch one. Luckily, Hanah was able to leave hers at Vons the night before. Otherwise, I had considered Lyft as an option… 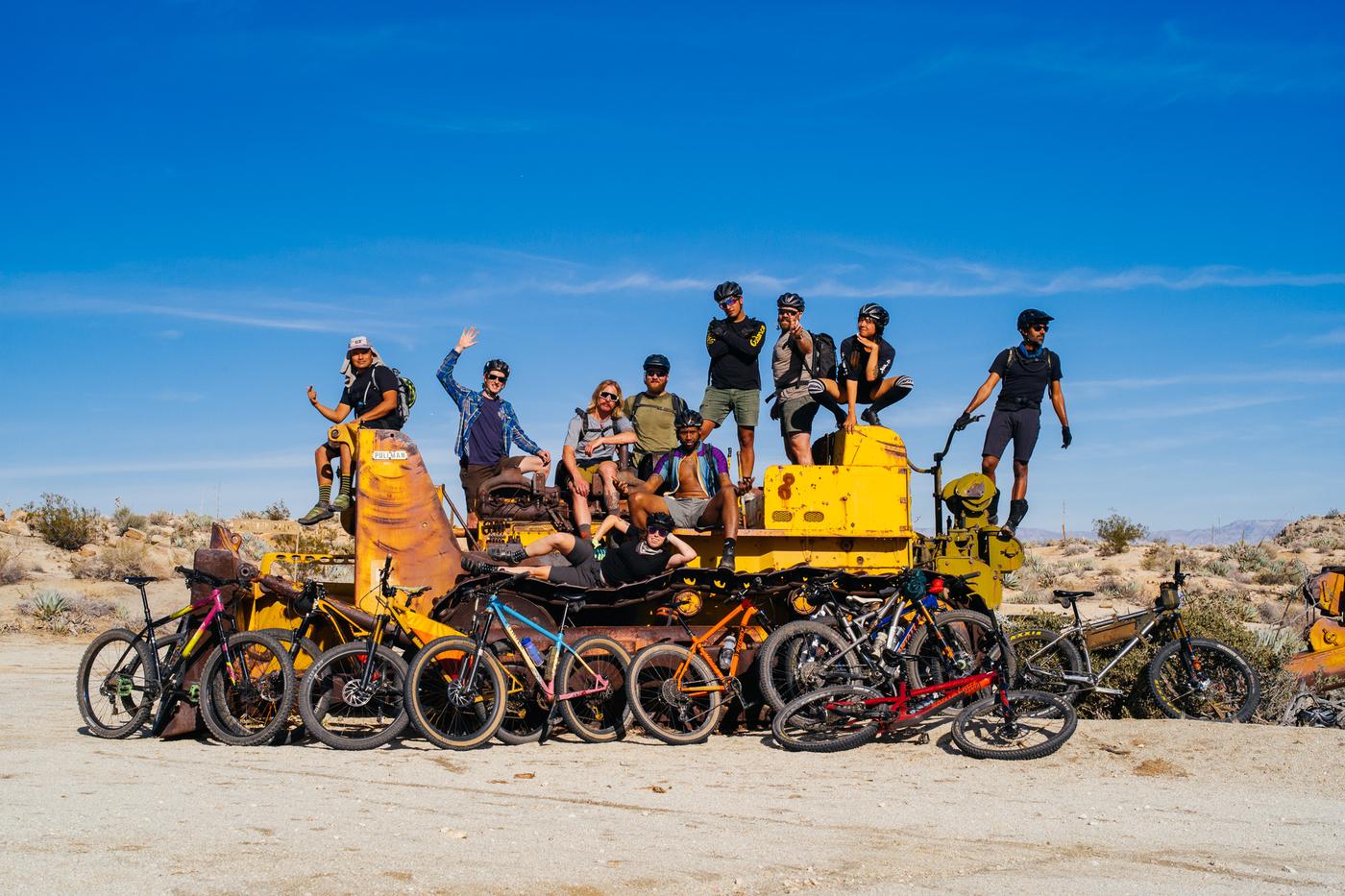 Epic is a word that’s given to just about any ride these days, yet the Palm Canyon Epic is an excursion that truly deserves its designation. The ride totaled 28.5 miles, 3,200′ elevation gain and a whopping 6,000′ elevation loss. Our route is mostly correct, save for an unintentional out-and-back on Dunn road, which you can willfully ignore. Please, recall the directions at the beginning of the Reportage and respect this land. It’s claimed a number of people over the years and it will do it again, without hesitation.