What would your dream bike look like? For the team at The Cub House in San Marino, California, just outside of Pasadena, they specialize in curated, custom dream bike builds ranging from Firefly road bikes like this one to basket bikes and everything in between. One of The Cub House‘s most recent builds was for a customer named Sheldon who wanted to put a bit of himself into this custom machine. We’re lucky to host Sheldon‘s words below, so read on to see what he did and why with this specific build…

I’m Sheldon and this is the story of why and how I put part of myself into this machine.

Firefly was a no-brainer for me because of the beautiful ways that they finish their titanium frames. Firefly bikes are also very rare in my LA cycling community. The owners I spoke with and people whose bike opinions I trust all stated that Firefly was a great frame building choice. Plus, I kinda liked the idea of working with people from Boston on a bike that would be hammered on rugged SoCal dirt. East meets West is a theme throughout my own story that I wanted to be reflected in my bicycle. 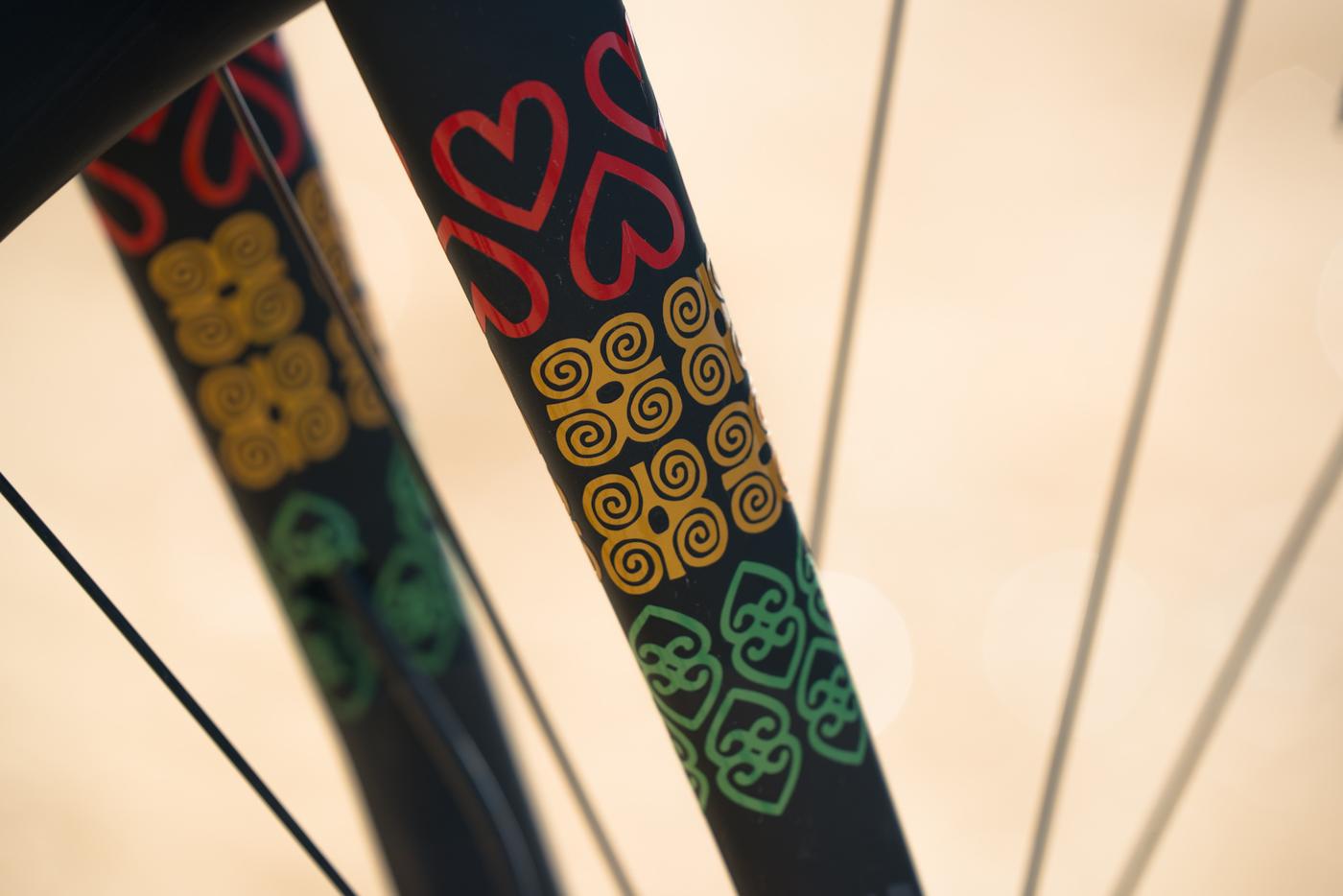 Going into this build process, I had a few ideas for the frame design but then a Minnesota police officer choked George Floyd to death as a horrified crowd watched. Sleepless nights followed as I reflected on my own struggles as a Black American male and the overwhelming racial discrimination my ancestors faced in this country. A real cathartic healing moment came when it hit me to do a Black or African-themed design on this frame. On IG I found an English club called the Black Cyclist Network that had a great kit design using African symbols. I learned that those symbols are called Adinkra from West Africa. It is very likely
that an ancestor of mine came from West Africa, so I decided to use Adinkra symbols on my frame.

I wanted the color theme of the bike to revolve around the pan African red, yellow and green that Ethiopia used in its flag when it became the first African country to declare its independence from a European colonizer. Many African countries followed by using those colors in their flags but Ghana’s flag is my favorite of them. I really like the black star set against the pan-African tricolor. So Ghana’s flag became the basis for the bike’s theme. 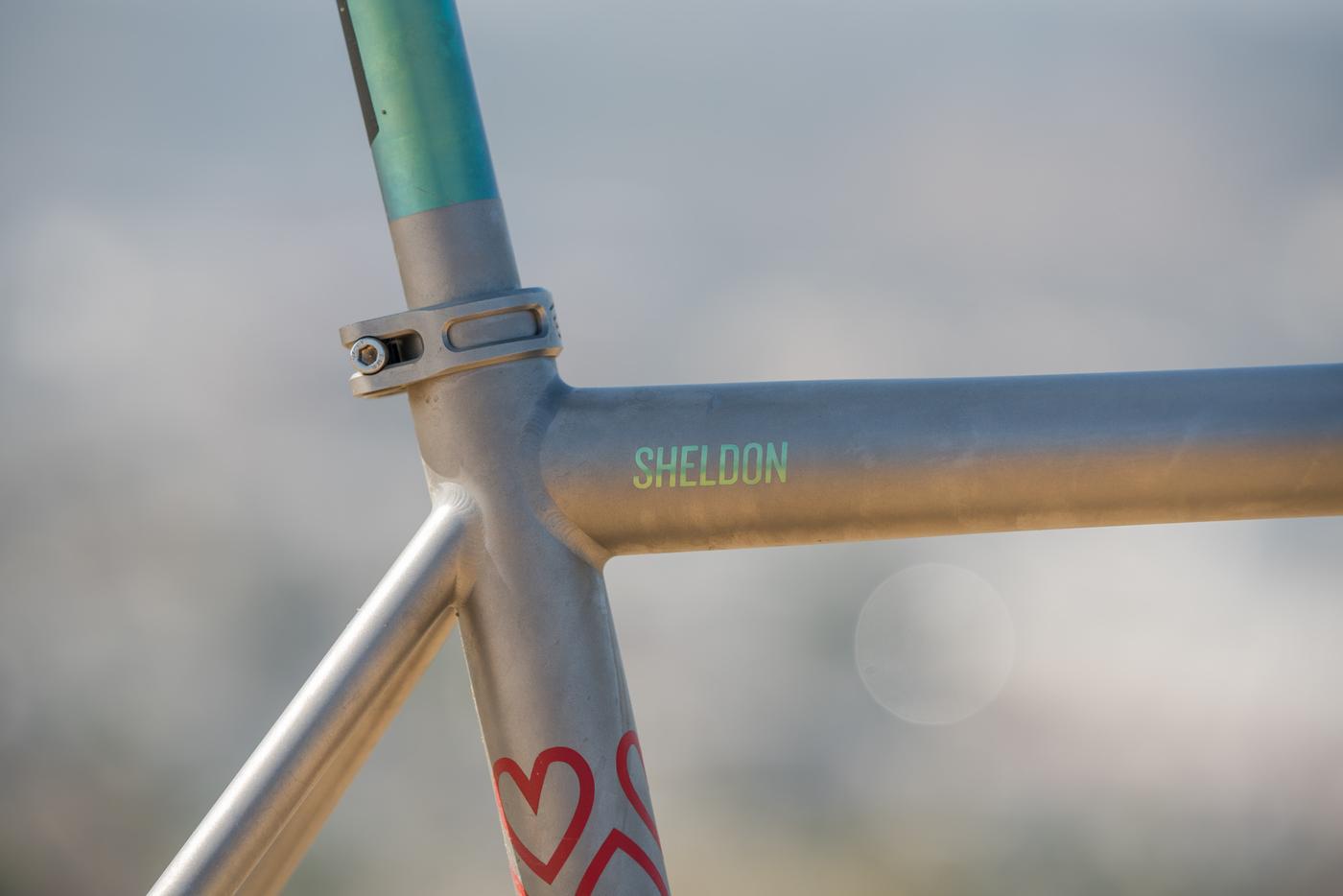 There are many Adinkra symbols but picking three that resonated to me was instantaneous. The red symbol, Akoma or The Heart, stands for patience, tolerance, and love. I have a severely mentally and physically disabled 7-year-old son. I got that symbol for him because he deserves all of the patience and tolerance that I can muster every single day. The yellow symbol, Dwannimmen or Ram’s Horn, stands for strength and togetherness. I’ve learned in my life journey that I need a support network to go forward. That symbol is for my family and close friends that I am grateful for. The green symbol, Assase Ye Duru or The Earth Has Weight, stands for the divinity of Mother Nature. It’s a gravel frame so it’s going to be in nature. I had to put a symbol celebrating natural environments on the frame. The final symbol is the black fist. To me, it symbolizes the continued struggle for racial justice and inclusion of Black people as well as the strength I need on my personal journey. 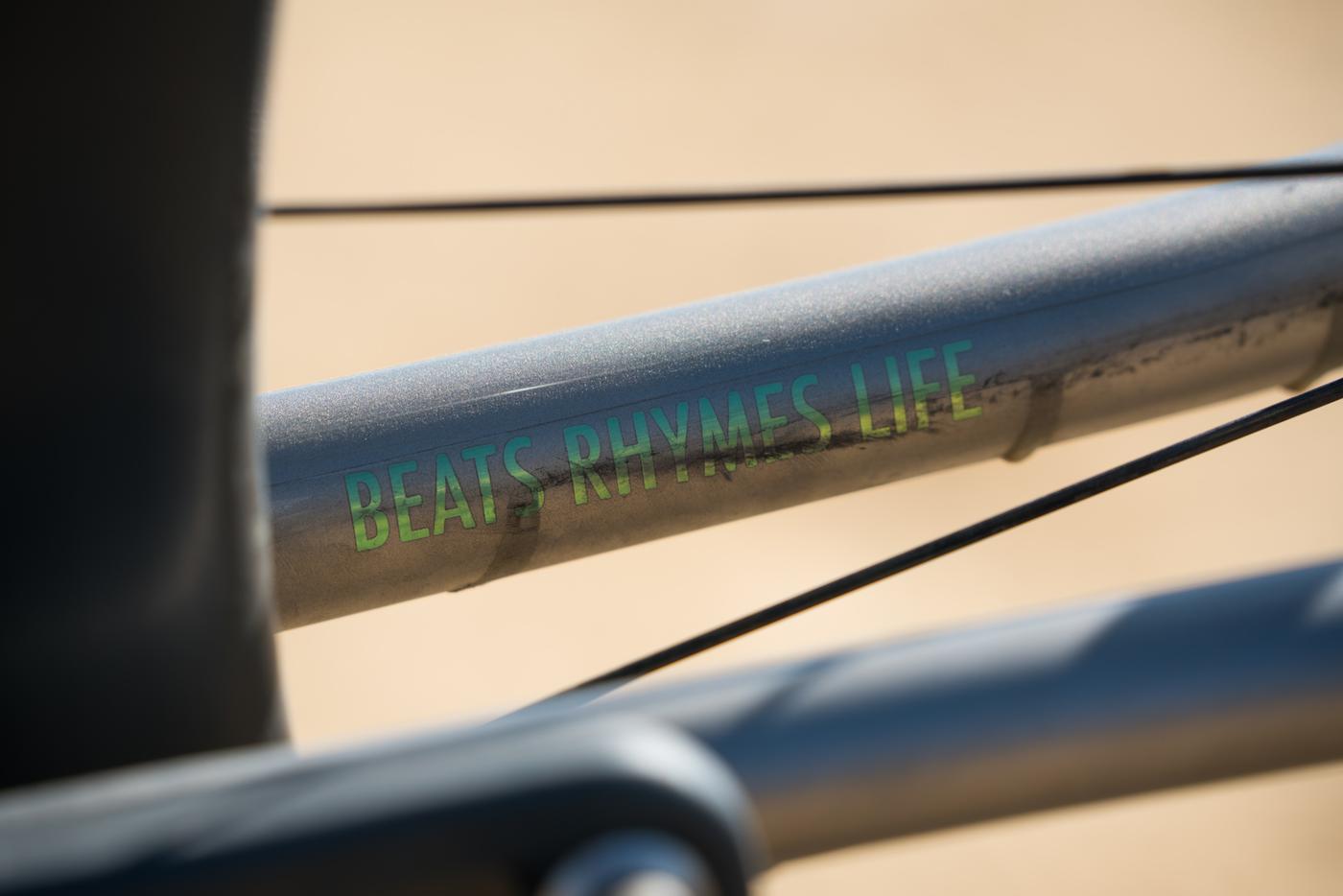 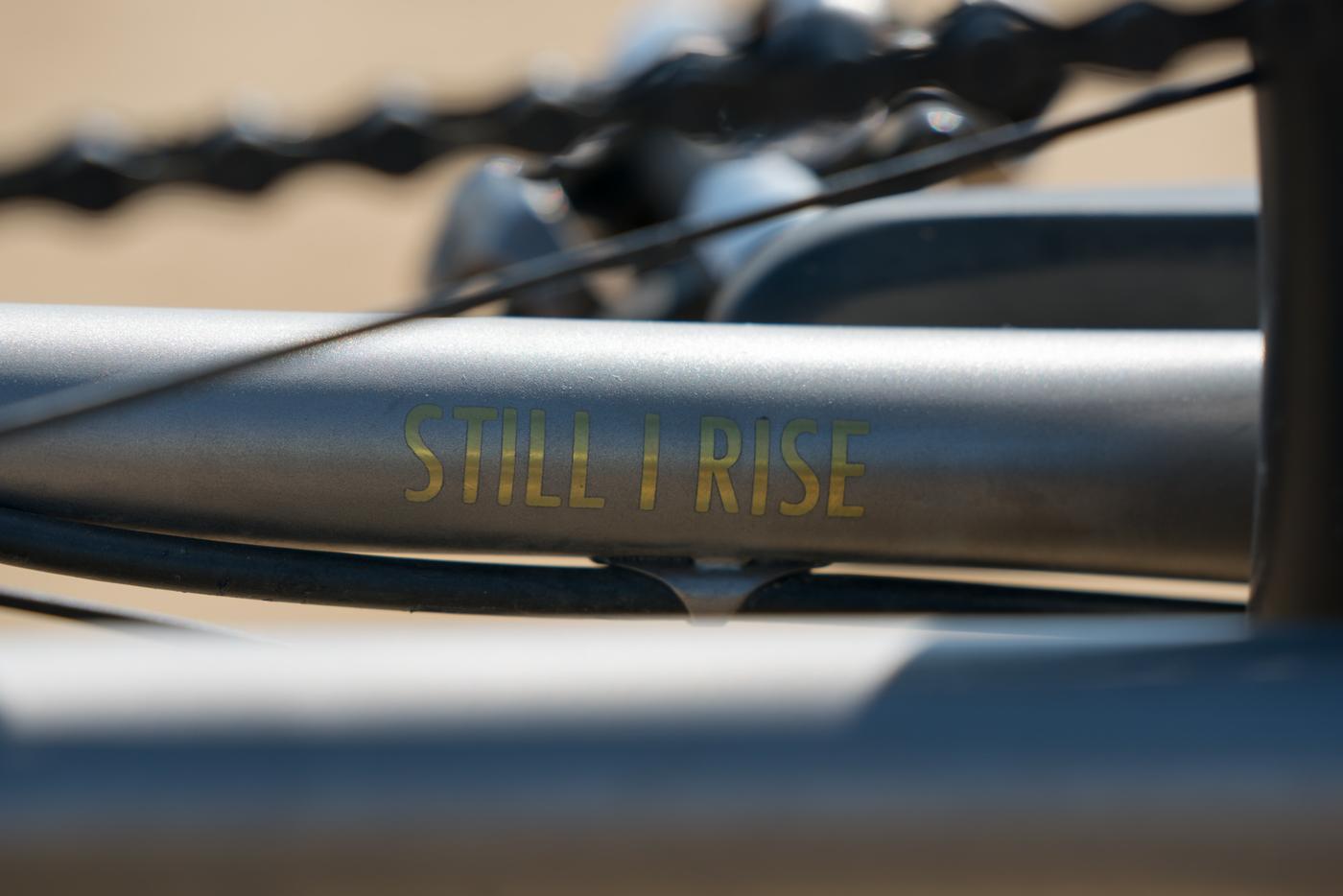 Using quotes along the inside chainstay of a bike is always clever, so I decided to choose a few for this bike. The first one, Beats Rhymes Life, comes from the hip hop group A Tribe called Quest. I struggled in every way as an early teen and it wasn’t until I heard the album The Low-End Theory that I felt someone in the world was talking to me. The last concert of theirs that I went to was in the summer of ‘96 where a 16-year-old me stood 2 people away from a 17-year-old Kobe Bryant. It was a magical night and time. I’ll never forget Q-Tip yelling “Beats Rhymes Life” as we all cheered. The second quote, Still I Rise, is a poem by Maya Angelou. I saw that quote on the back of a jersey I have by Rashaan Bahati who was the first professional Black cyclist that I ever saw. I’ve had a few life situations these past few years that I could not have imagined. I’ve had to search for ways to rise despite them. 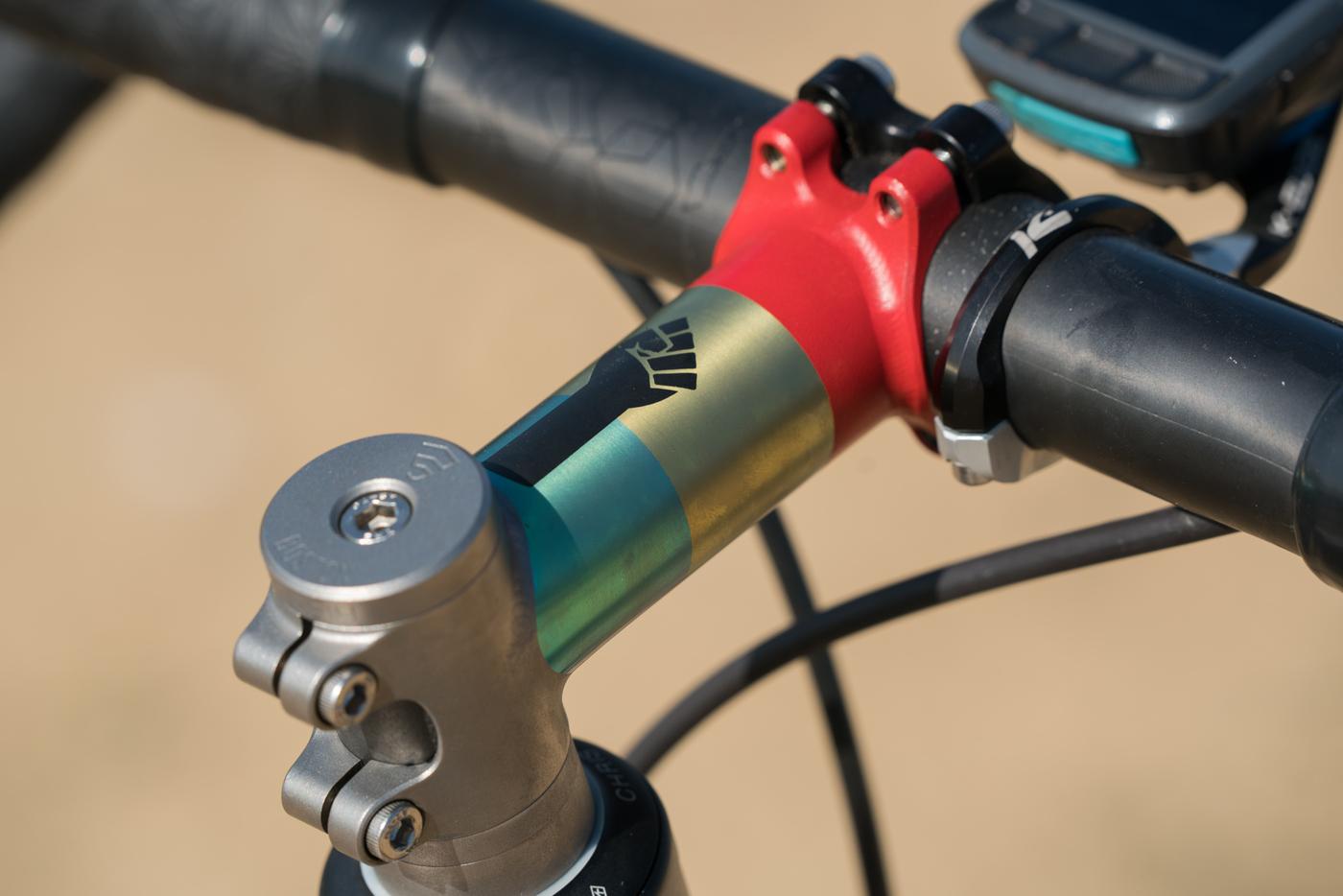 Over a beer, I emailed all of those ideas out to Firefly. I had no idea how a group of people I had never met from Boston was going to react. I got an email back from Kevin at Firefly a day later saying pretty much, “We’re happy to tell your family story and we’ll get you a design in about 8 months.” 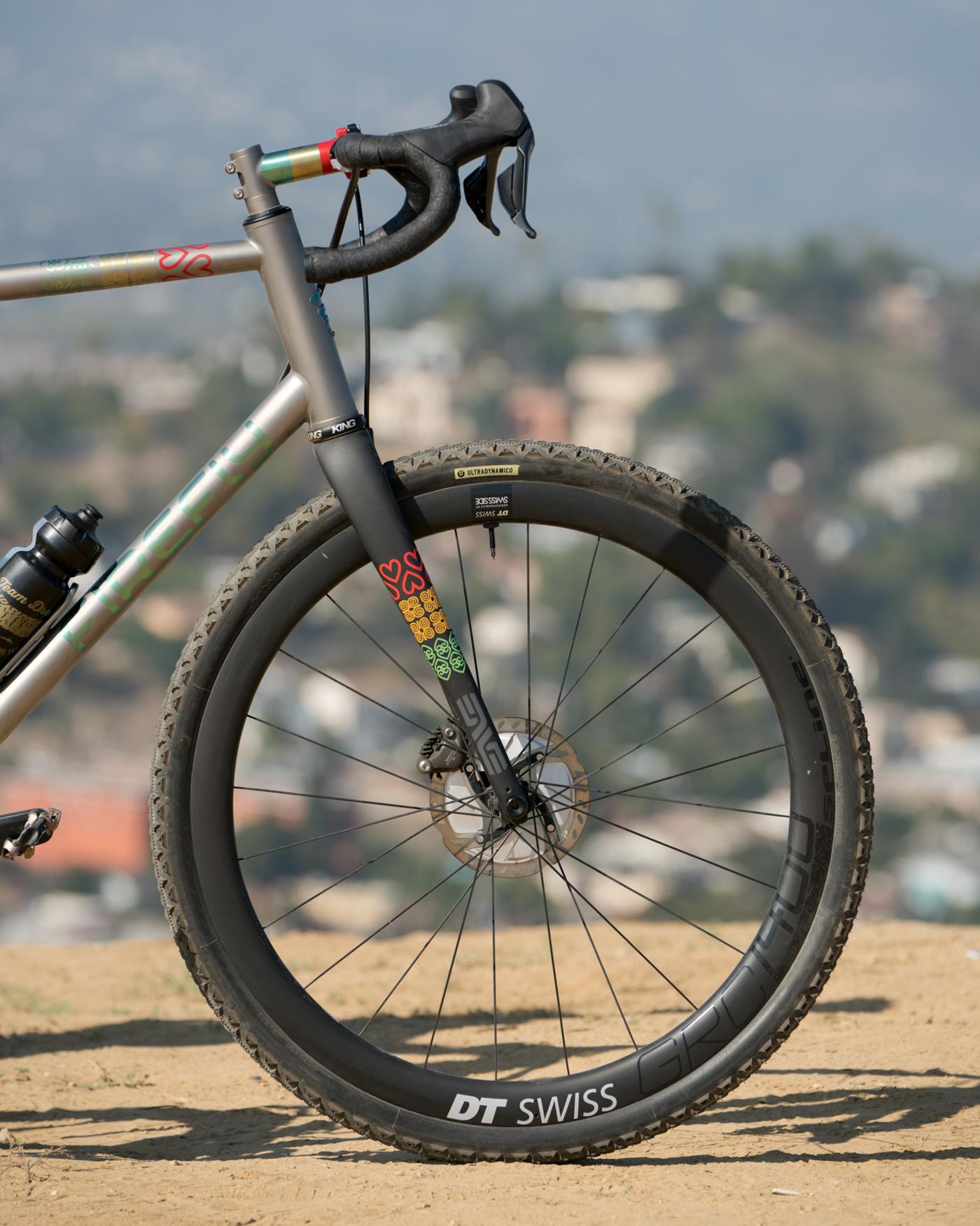 Well, those 8 months went quickly and then I got an email with the design that blew my mind. I loved the use of the symbols in the pan African colors. But painting the stem and the seat post in the pan African colors with the black fist in the middle was beyond anything I could have imagined. I was shocked at how well people I had never even spoken with over the phone could nail my ideas for the frame. Looking over my shoulder at the bike as I finish this piece, I see a part of me. The bike looks and rides better than anything I could have imagined when I put the deposit down in January of 2020. I paid a lot of money for the frame but I feel like the people at Firefly put a level of love into the design that money can’t buy. I thank them very much for their efforts. The frame will be with me for the rest of my life. I know that looking at it when I’m old and too frail to ride will bring back years of memories of people and places spent with a machine that became a part of me. 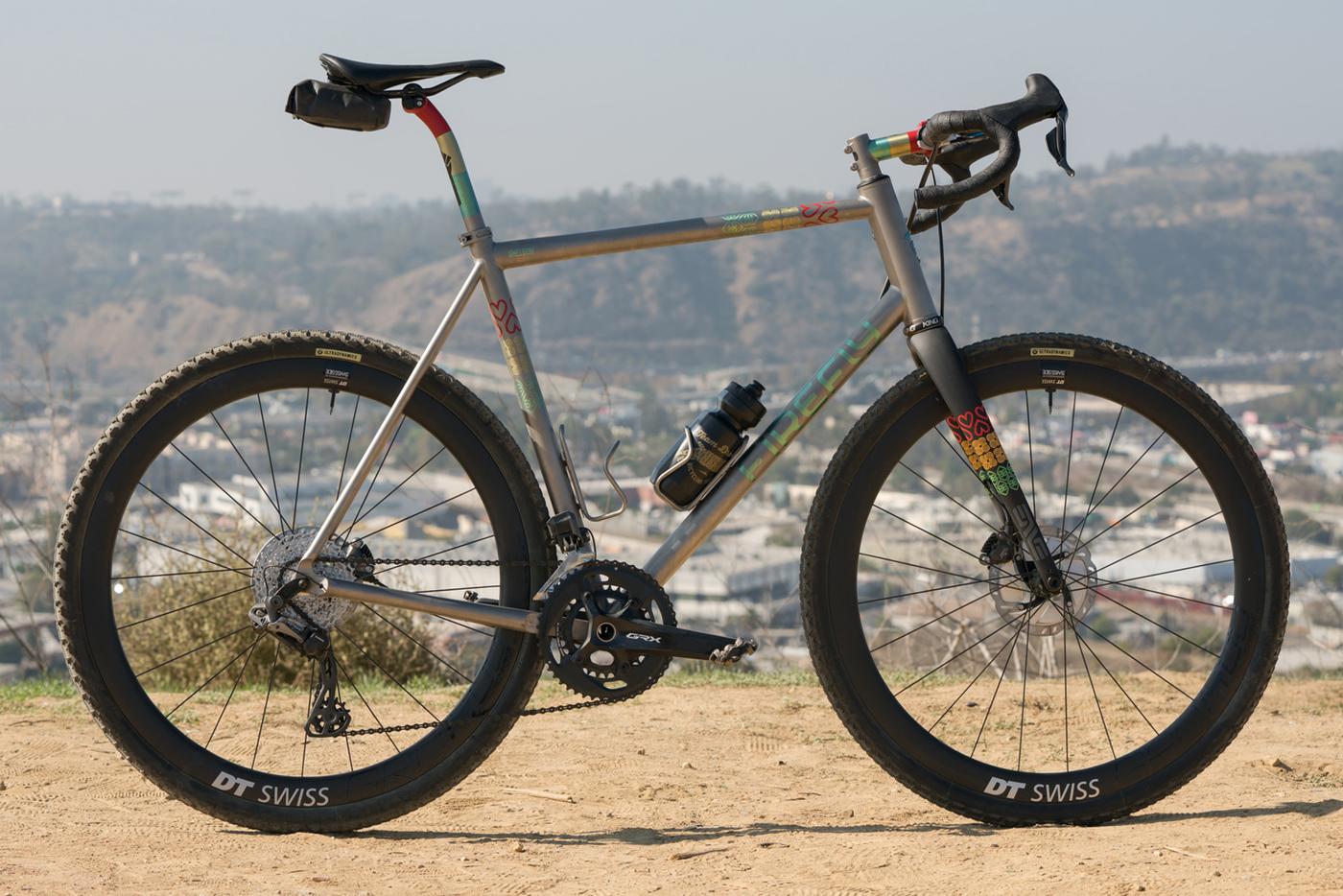 Shameless plug for The Pro’s Closet without even trying!

Originally Sheldon came to the shop with his current gravel bike, an Open Wide with older parts, and just wanted to swap everything over onto this frame. It made sense, parts are hard to get plus we all love saving a bit of money. But this frame is so unique it needed some new stuff, plus as we all know with frame swaps there is never a “just swap everything over.” So I secretly submitted his OPEN to the Pro’s Closet while it was in for service before the swap, sent him the offer (that more than paid for all the new build parts), and promised I would find all the parts he wanted to make this build happen! He had to do some hunting too but we pulled it off :)