Do not be afraid to really ride this bike. Yes, it only clears a 32mm tire, but 6 years ago, we were riding singletrack and fire roads on a 32mm ‘cross tire. A lot has changed in that time but my point is, you can ride dirt and gravel on a 32mm tire. Just because this bike has a fancy paintjob, with some fancy Speedvagen details, don’t be afraid to rally this bike on your favorite dirt roads.

The only changes to the Disc OG from the OG-1 in terms of specs are the wheels and tires. The Disc OG typically comes stocked with Ultegra mechanical at base price but can be upgraded to any group you’d like, including the new SRAM Force eTap AXS pictured here. Other than that, the Disc OG rides much like the OG-1. 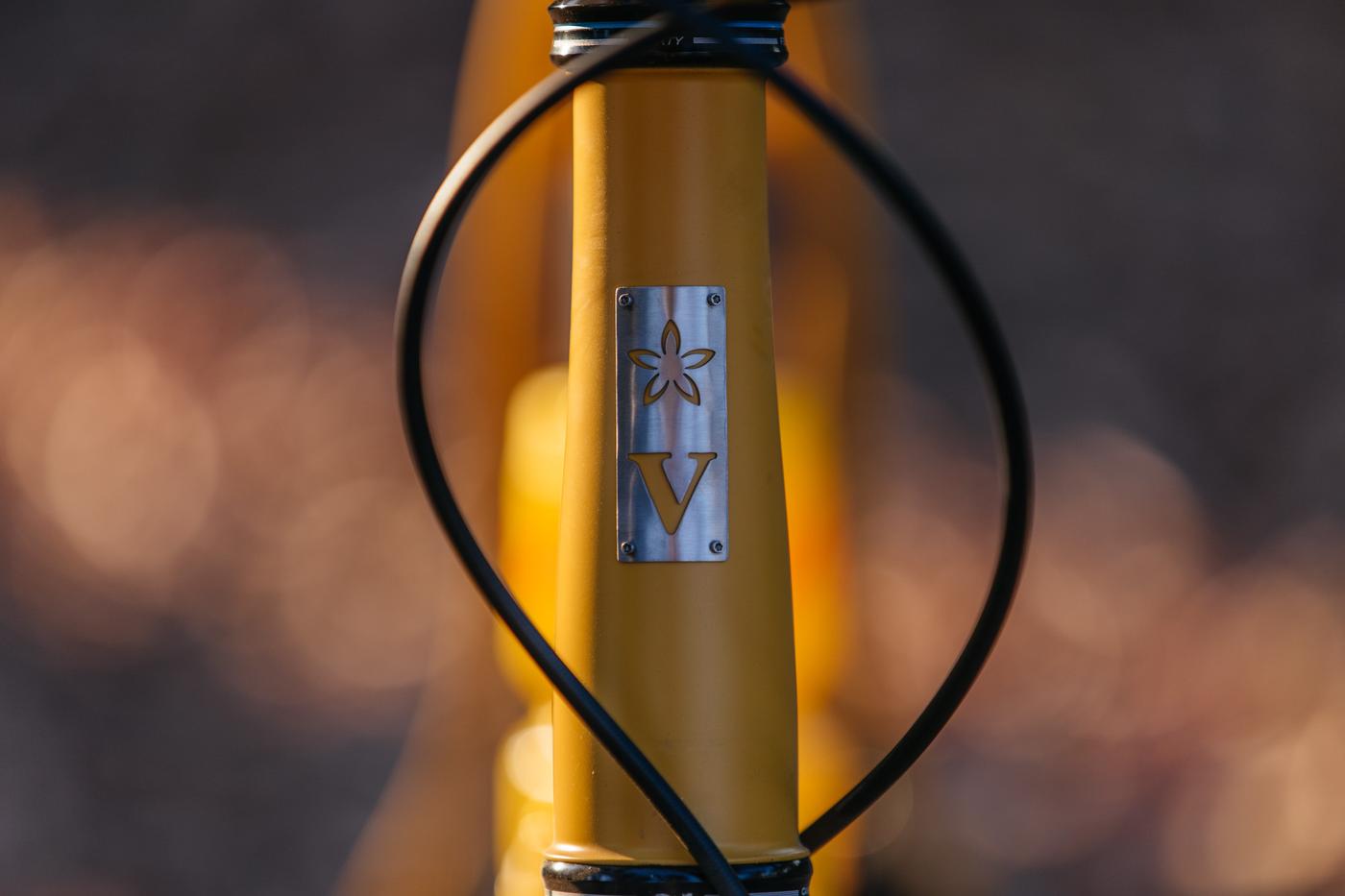 For it being such a minimally-branded bike, it has a lot of beautiful details. For starters, the ENVE post topper comes standard, utilizing ENVE’s new asymmetric clamp hardware, resulting in no more pesky slipping. At the cockpit, the PRO PLT stem painted to match the frame really draws in the eyes to that big, beautiful head tube. The head tube is designed and turned down in Oregon and it’s not just for looks. The bigger lower bearing takes a majority of the road-load, while the smaller top bearing allows the bike to freely move with less steering resistance. Form and function! 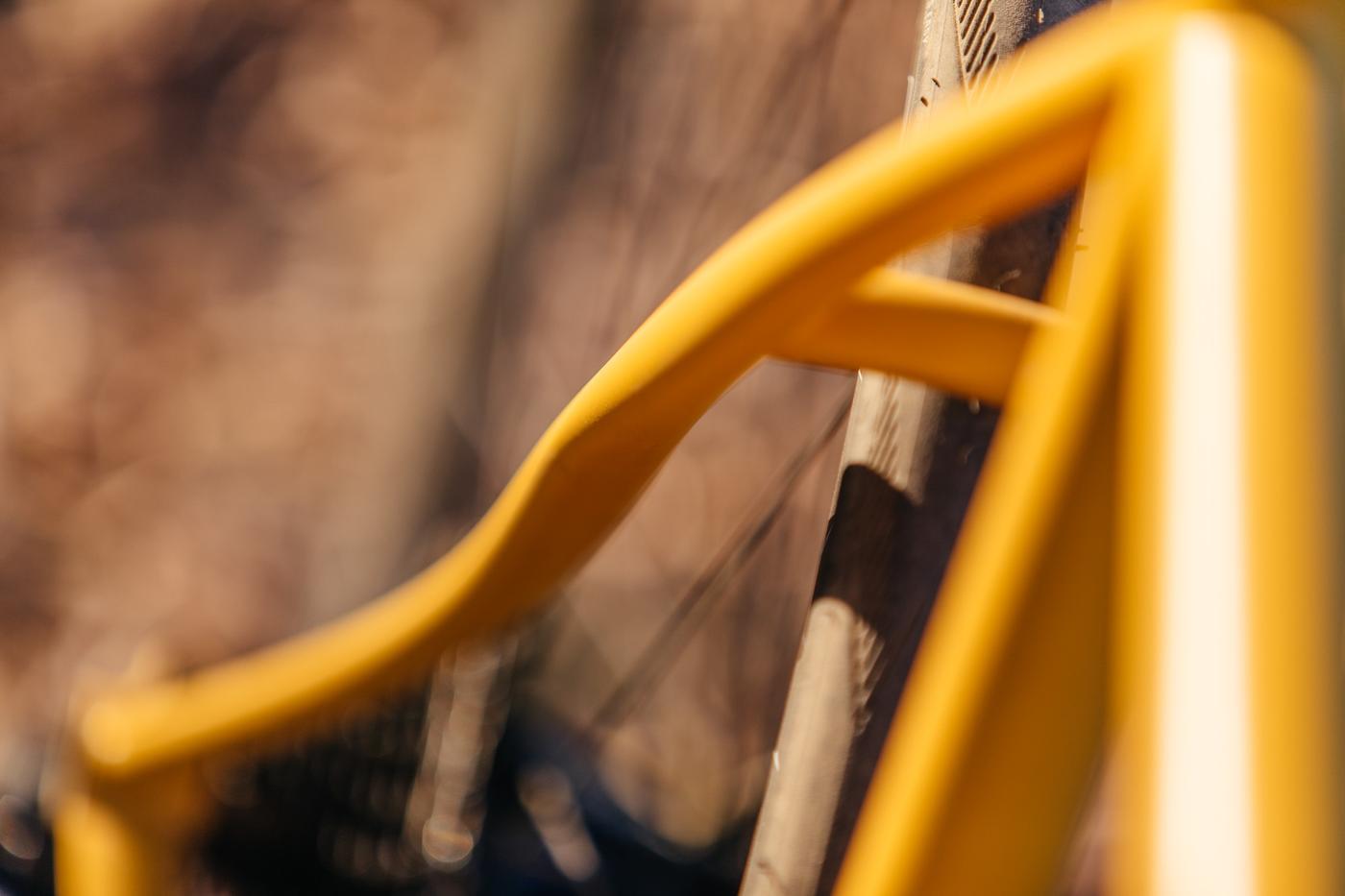 The seat stays are bent and flattened, in typical Speedvagen fashion. Does that make for a more compliant rear end? Many brands will say shaping the stays does but I’ve never noticed it. This is a steel bike, so it’s naturally more compliant and comfortable. If you want a stiff roadie rocketship, buy a carbon bike from one of the big brands. The Disc OG is a bike with soul. If you’re interested in a tube-by-tube breakdown, Speedvagen has a post on their blog explaining the specs. 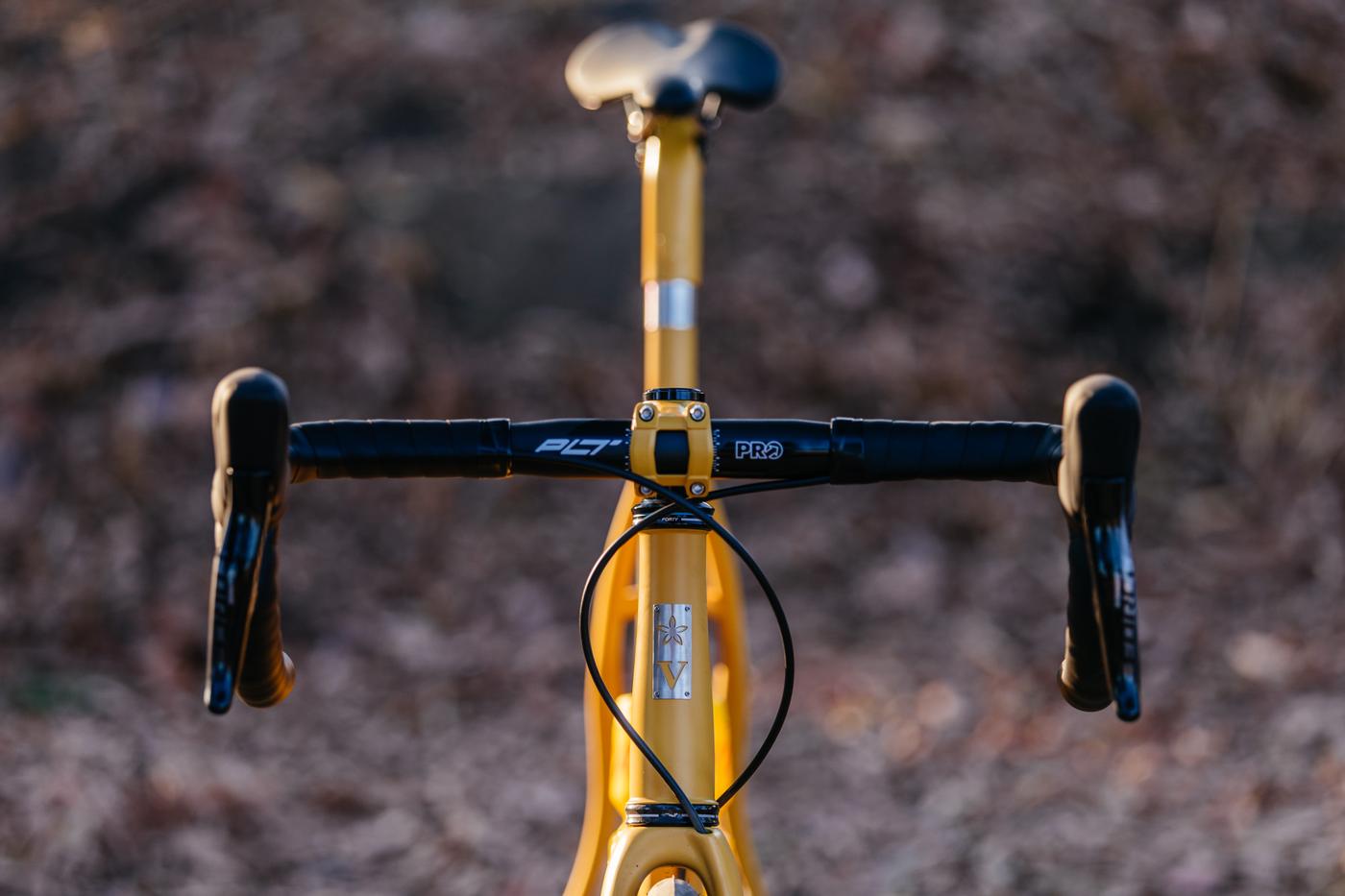 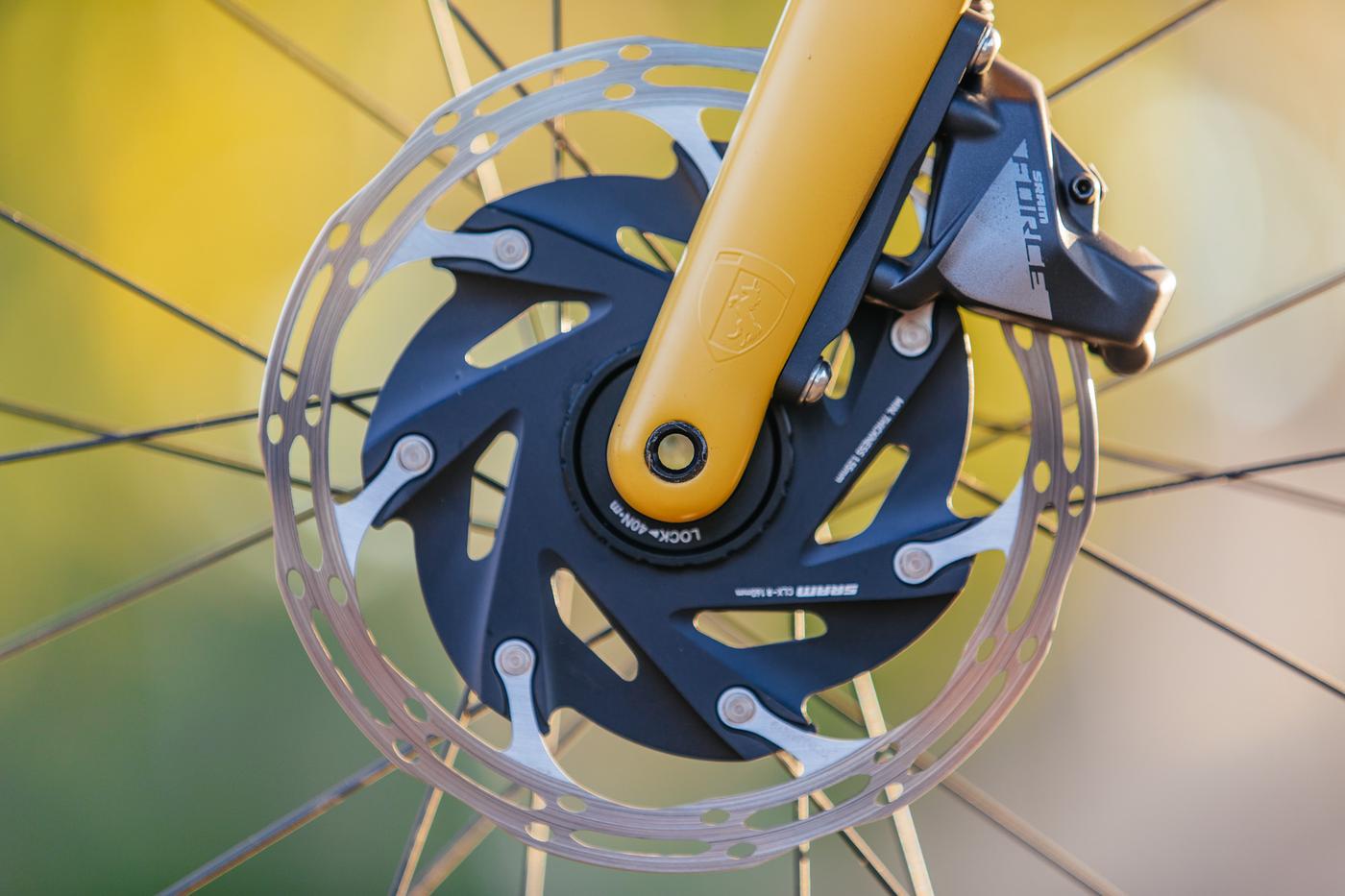 So after riding this bike for a few weeks, I can’t really say the OG-1 or Disc OG is better than the other. It’s all about preference. We have big-ass mountains here in Los Angeles and don’t be surprised to climb 5,000′ only to descend the same, on pavement or dirt. For my riding, I would much rather have disc brakes over rim brakes since the dirt roads here are much steeper than the paved but if you’re road-minded and don’t feel comfortable descending dirt on a 32mm tire, save the weight and go with a rim brake. 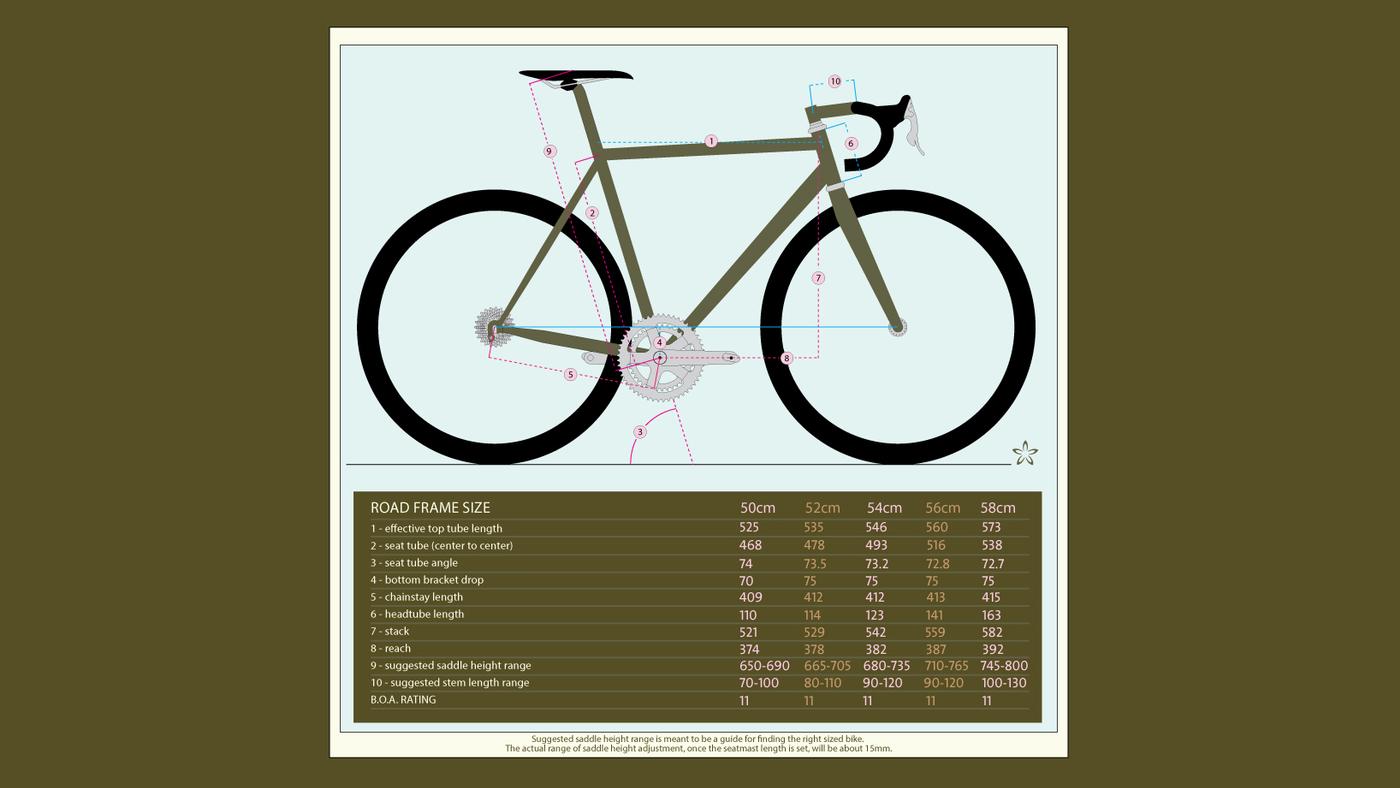 Speedvagens are special bikes. There’s something about the ride that is unmatched. Could it be the integrated seat post? Or the custom-butted tubing? Sure, but I think it’s a combination of many features. The geometry is very zippy. In fact, since I now ride with my cleat moved further back on the shoe, I have a bit of toe overlap with a size 47 shoe but I don’t mind, because if the head angle was a half-degree slacker, the bike wouldn’t ride as nicely, in my opinion. The bike accelerates quickly, hugs corners, absorbs road chatter, and climbs like a dream. In fact, I hopped on my OG-1 rim brake and this bike back to back to see if I was crazy thinking the Disc OG rode better. That’s when I realized a lot of the experience was the SRAM Force eTap AXS group. 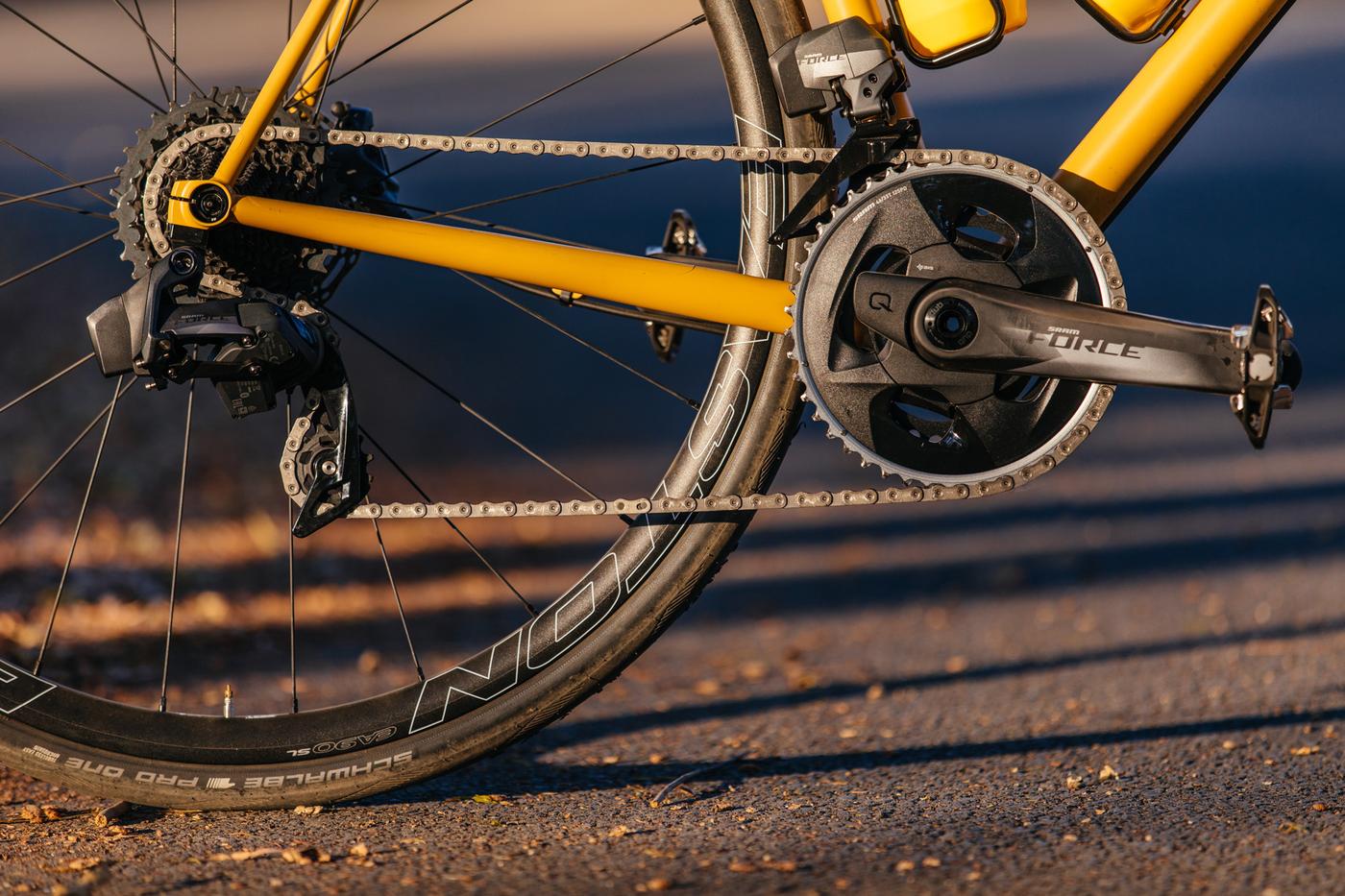 I like to joke that I’m a fan of trickle-down tech. While Sram Red eTap AXS was very nice, the pricepoint was choke-worthy. With the Force eTap AXS group, you get the same feel of Red, at a lower price. The AXS system is a game-changer. It cleans up the lines on the bike, offers the crispest shifting SRAM has ever made – which isn’t saying much – but it’s worth noting that I like having a front derailleur again. 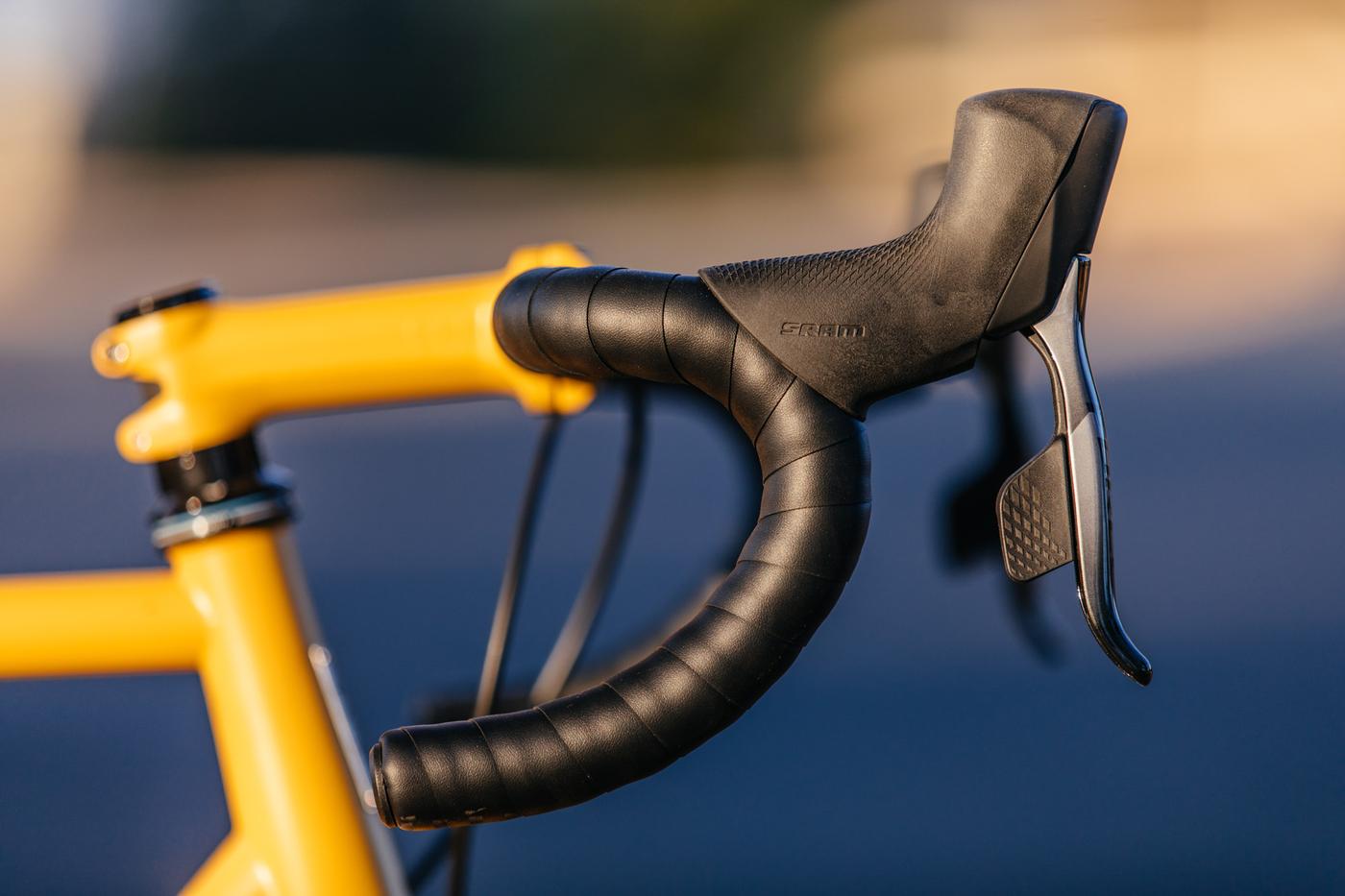 The Achilles of the system are the batteries but having only charged them once in the duration of this review, I can honestly say they are more reliable than many internet experts would have you believe. Immediate shifting, precise shifting, and being able to shift reliably under load makes Force AXS the nicest groupset I’ve ridden from the brand. Also, I didn’t even use the power meter. Sorry! 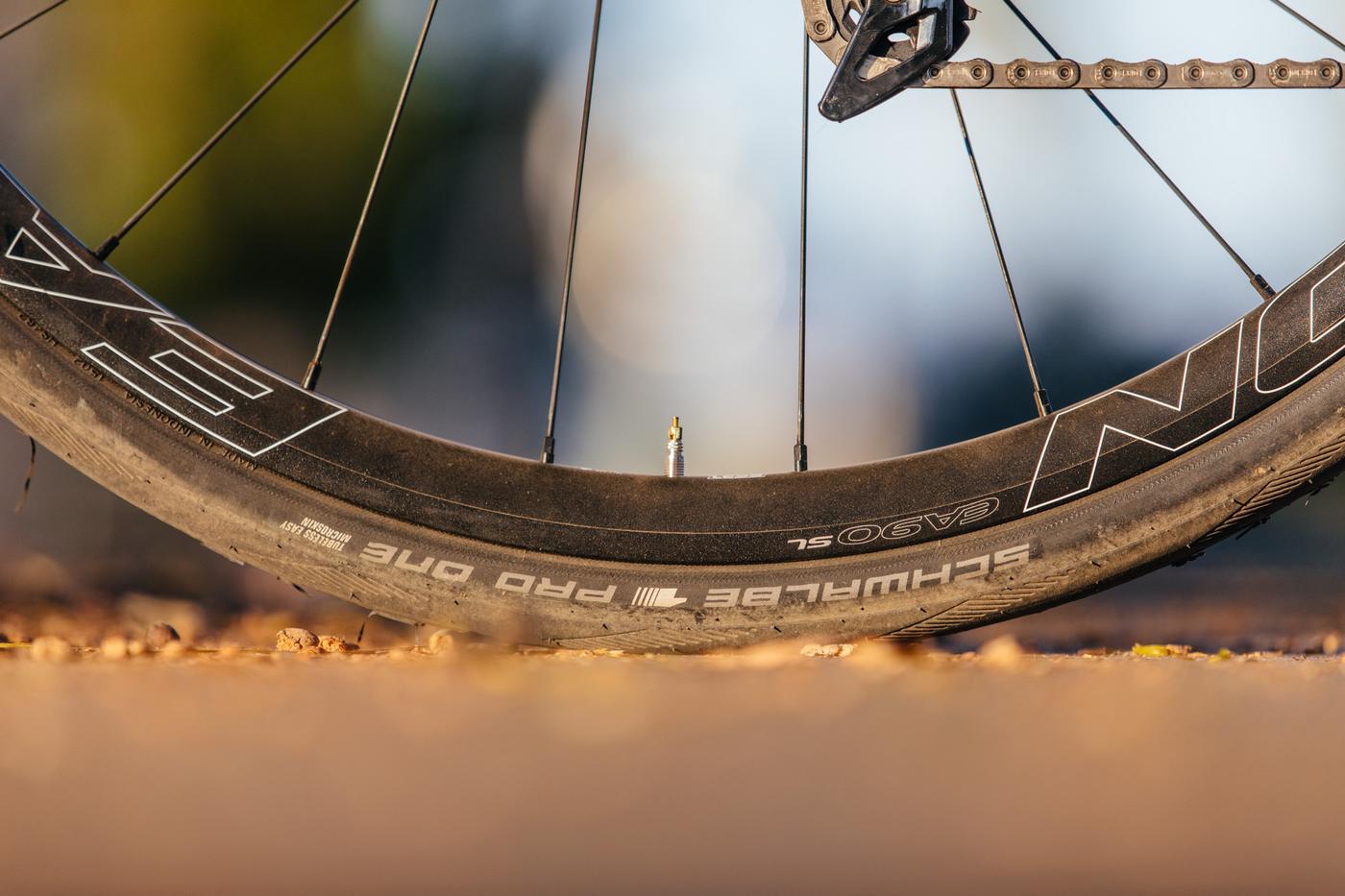 The Easton EA90 SL wheels are another nice build spec option. With crisp shifting, you need crisp hub engagement to really appreciate the overall ride experience. While I prefer carbon wheels for mountain bikes, alloy rims for road riding are all I need. These wheels have an internal width of 19.5mm, making them perfect for a 28-32mm tire. The rims are welded, so they’re strong at the seams, use the Easton VAULT 525 hub, and SAPIM spokes. I don’t like super stiff road wheels and the 20/24 spoke count offers up a subtle, yet comfortable ride quality. After these photos were shot, I set them up tubeless and they seated nicely. At $479.99 for the rear and $374.99 for the front, they aren’t super cheap, but anything priced lower would be sacrificing quality somewhere. 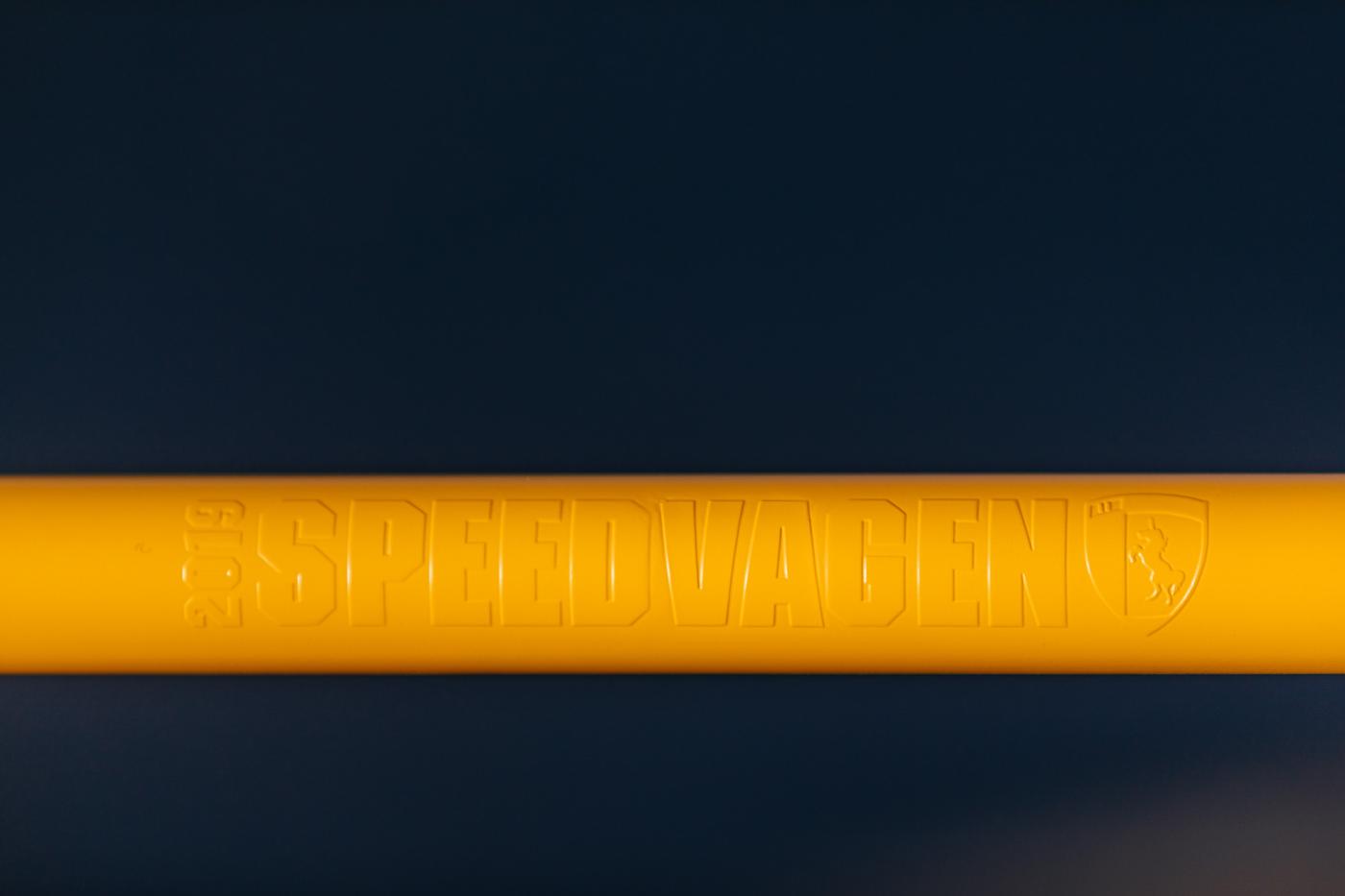 PAINT! How can you talk about Speedvagen and not mention the paint. When Richard from Speedvagen asked what color I wanted for this review bike, I picked this beautiful golden yellow. It’s one of my favorite classic Toyota colors – and it’s pretty close! – but I didn’t really appreciate it until seeing it pop in that golden California light. Now the Disc OG comes in either blue or olive drab, but read on below for how you can get a color upgrade for free…

What’s so nice about the paint is the semi-gloss finish, attained through the clear coat. With masked and raised text, the Disc OG isn’t just a one-and-done spray job. A lot of time and energy went into this bike. For the Disc OG Ready-Made pricepoint, you really feel like you’ve got a custom – and more expensive – Speedvagen custom. We’re offering a special discount through this review. If you order one and mention this review, Speedvagen will wave the $350 fee to upgrade to one of their other seasonal colors, like this Twilight Gold for example (fourth from the left on that graphic.) 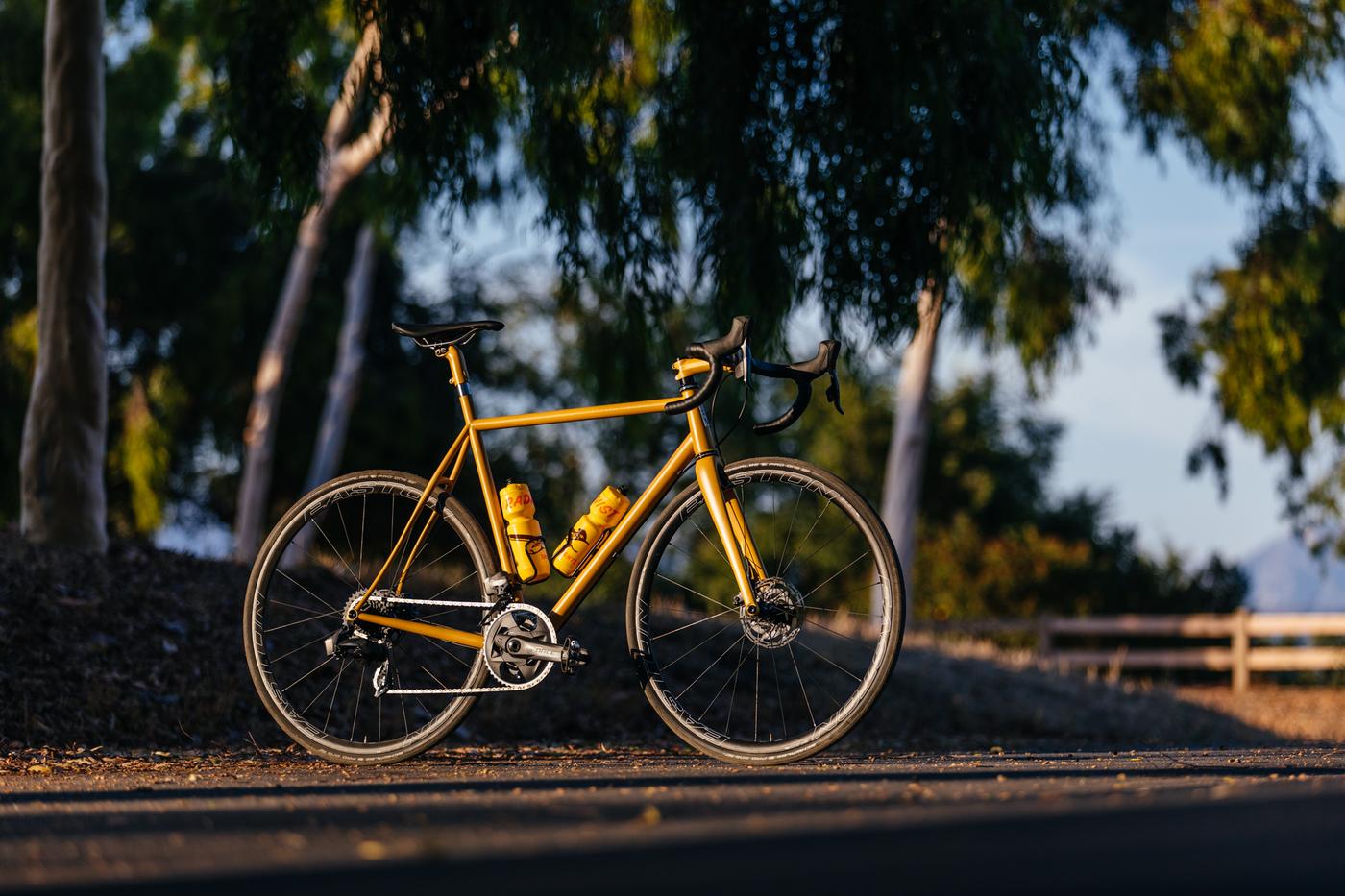 Premium for American Made

Look, the Disc OG is not a cheap or affordable bike, but you will save thousands over a custom geometry Speedvagen. These Ready-Made bikes come in a variety of sizes and the truth is, most people don’t need a custom geometry. The cheapest the Disc OG gets is $6295, built with mechanical Ultegra and a plethora of other fine components. As built here, you’d be adding the difference of price from the Ultegra to Force AXS (approx $800 difference.)

Still compared to the price of a custom Speedvagen frame ($4950), it’s a worthy and more affordable option.

Would I buy one? Well, my riding preference has changed a lot over the years and with the unsafe roads due to distracted drivers and Uber/Lyft here in LA, I’ve found myself going on fewer and fewer straight-up road rides. I like to get to the dirt and away from cars as soon as possible. To the point that my Olive Drab OG-1 sat for about a year unridden. The review however made me realize how much I enjoy solo road rides on a small 700c tire. Perhaps I’ll swap my Firefly’s wheels over to 700c?

If I lost my Firefly and needed a disc road bike, I would for sure consider the Disc OG. Partially because I love how it looks but definitely due to its ride characteristics. I hope one day you can throw a leg over one of these machines but be warned, you’ll get hooked!

Head to Speedvagen to read more about the Ready Made Disc OG.