Gideon Tsang recently caught up with Kae-Lin, Steve, and Jim of Seattle’s Asian Bike Club (ABC*). The club hosts regular meetups geared toward sharing food and building community. Let’s check it out below! The 2021 Atlanta spa shooting reverberated around the world. On the opposite end of the country in Seattle, it stirred up a response that left many Asian American and Native Hawaiian/ Pacific Islanders (AA & NH/PI) feeling overwhelmed. Kae-Lin Wang is the Operations Coordinator at Bike Works and a Texan transplant living in Seattle. She caught the cycling bug in 2013 when she rode from Seattle to Portland. Inspired by what her body was capable of, she grew into a stronger rider, most recently completing the Great Divide Mountain Bike Route and Ruta del Jefe.

On the tragic day of the shooting, hearing reports of violence targeted at her Asian community, Kae-Lin’s entire childhood started unraveling. It started a series of triggers that uncorked decades of suppressed emotions. She was confronted with her subconscious submersion into whiteness when she realized that she had very few Asian friends in Seattle. Like many of us, she felt alone and scared. 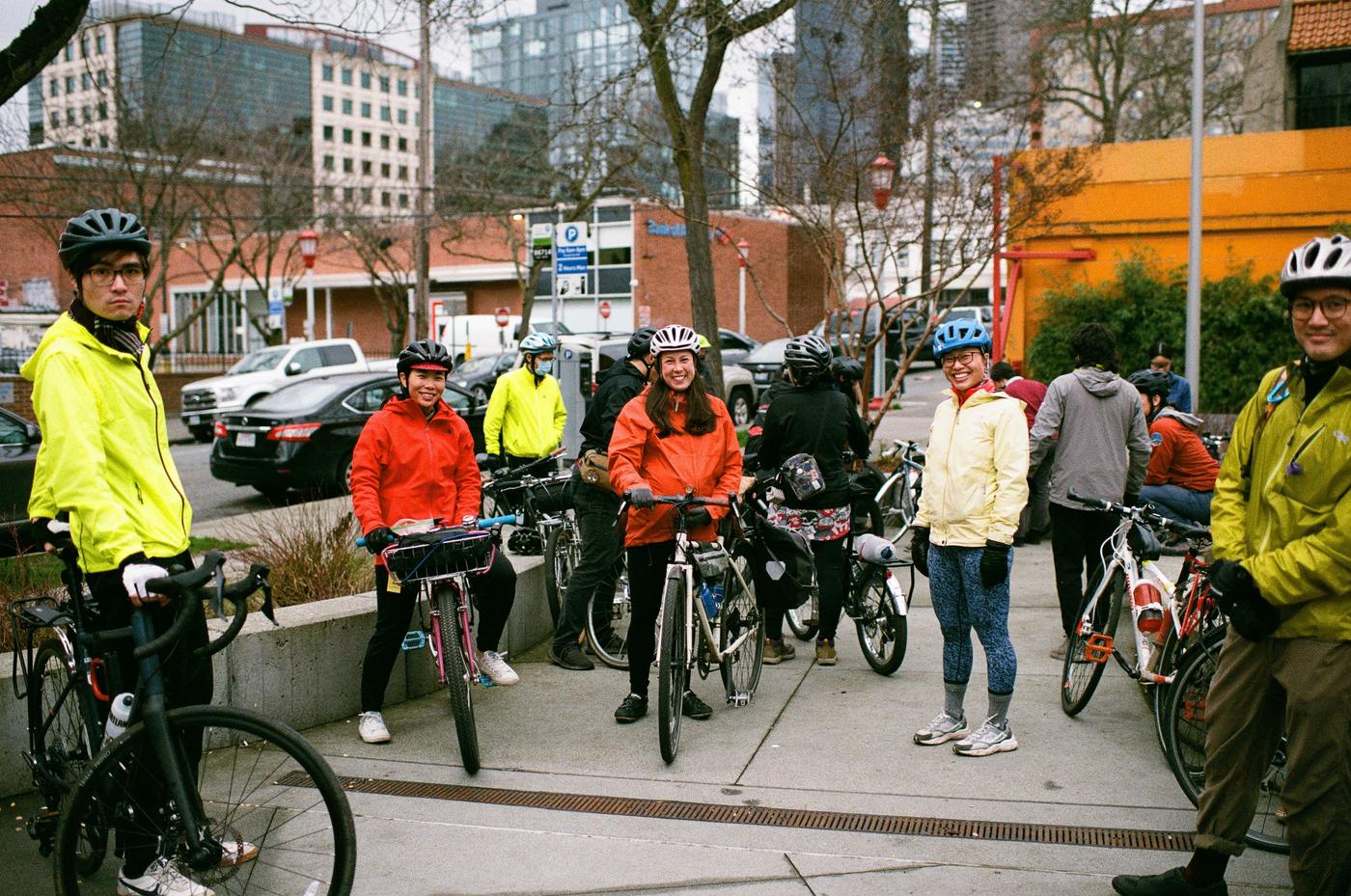 Kae-Lin threw out a call on Instagram to see if other AA & NH/PI folks wanted to gather. As she biked to the meet-up spot, thoughts raced through her head. Would anyone even show up? What if the call confirmed her sense of being alone? She sat at Gas Works Park waiting in anticipation. To her surprise, rider after rider showed up on bikes of all shapes and sizes. Eventually, 40 new friends showed up for that first gathering. Kae-Lin’s hunger for community was reciprocated and there she met Steve, Jim, and Aaron from Bike Works. Little did they all know, the seeds for Asian Bike Club (ABC) were sown. Steve is the Recycle and Reuse Director at Bike Works. He fell in love with bikes while his dad was stationed in Puerto Rico. He has visceral memories of being six years old and captured with awe as he rode through the forest behind the setting sun.

Steve took the lead in scouting the route for the second ride. ABC hadn’t been formed but the ethos started to come to life when they found themselves in the International District. It started with ordering way too much food and the meal became a vehicle for sharing about their lives. Food allowed walls to come down, to form deep connections in ways they didn’t anticipate. While sharing a meal with a large group of AA & NH/PI folks, they were reminded of where they came from, the American experience they share, and perhaps most importantly, that they weren’t alone. From that point, food became the theme of the club. 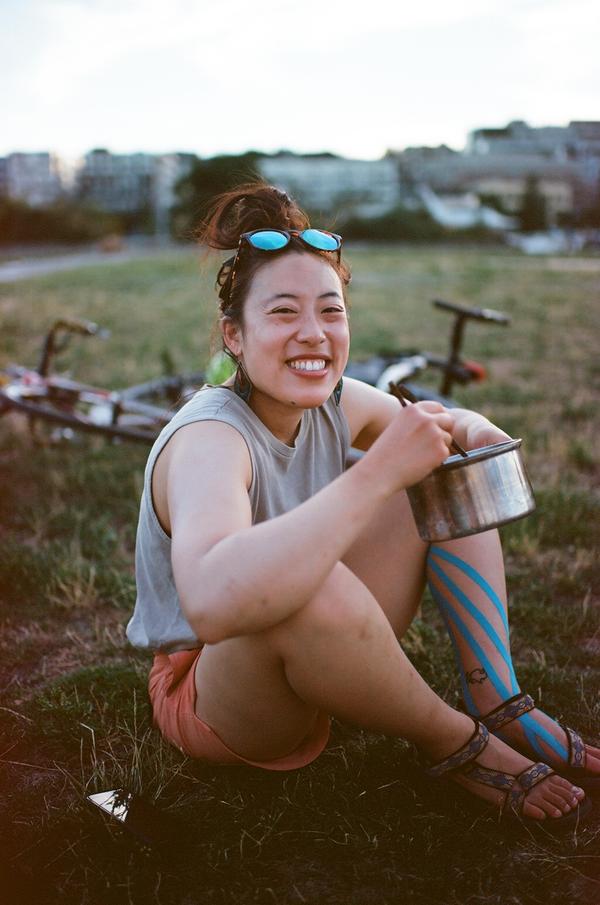 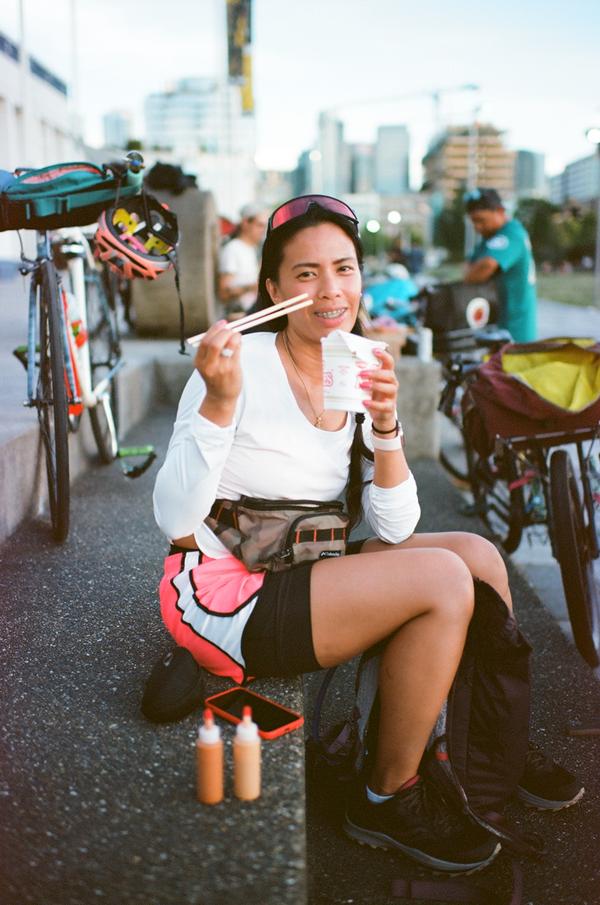 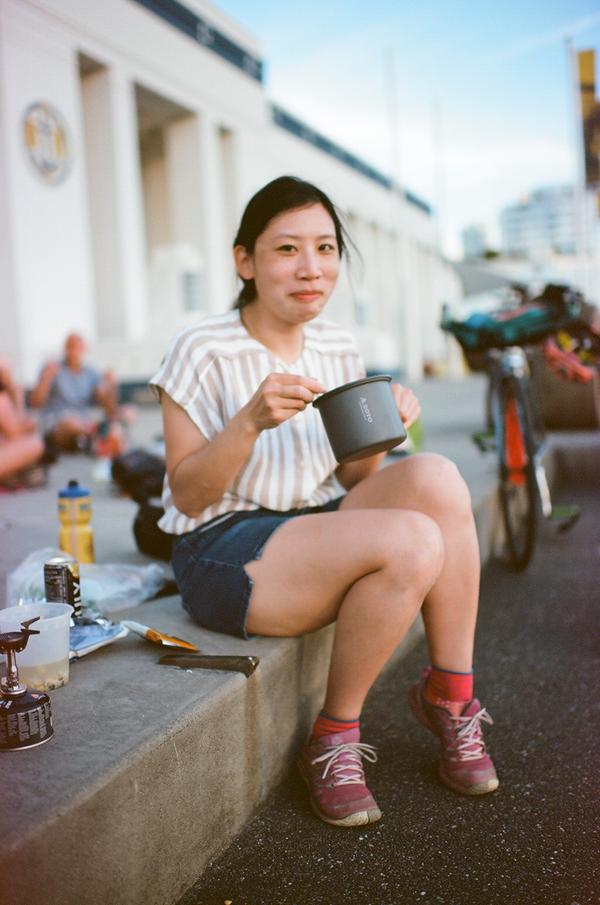 The club continued to grow and logistics became more complicated. Kae-Lin wanted a monthly outdoor gathering centered around food. The initial idea was to borrow from the coffee outside concept since you didn’t need a lot of riding experience or special gear. It clicked with their desire for inclusivity since you just needed a bike, a stove, food to share and a positive attitude. “Ramen Outside” was born and became the monthly gathering place for ABC.

Steve grew up with beautiful memories of the Filipino potlucks of his childhood. Ramen Outside had the same feeling. He watched as one person asked if anyone needed extra dried mushrooms and another shared their raw eggs cracked into the hot ramen broth. He sat there savoring the sounds, smells, and flavors of dozens of pots of ramen firing at full boil. He didn’t know he needed that community and experience. He thought to himself, what if this community became a restorative, brave space to be shared with others? 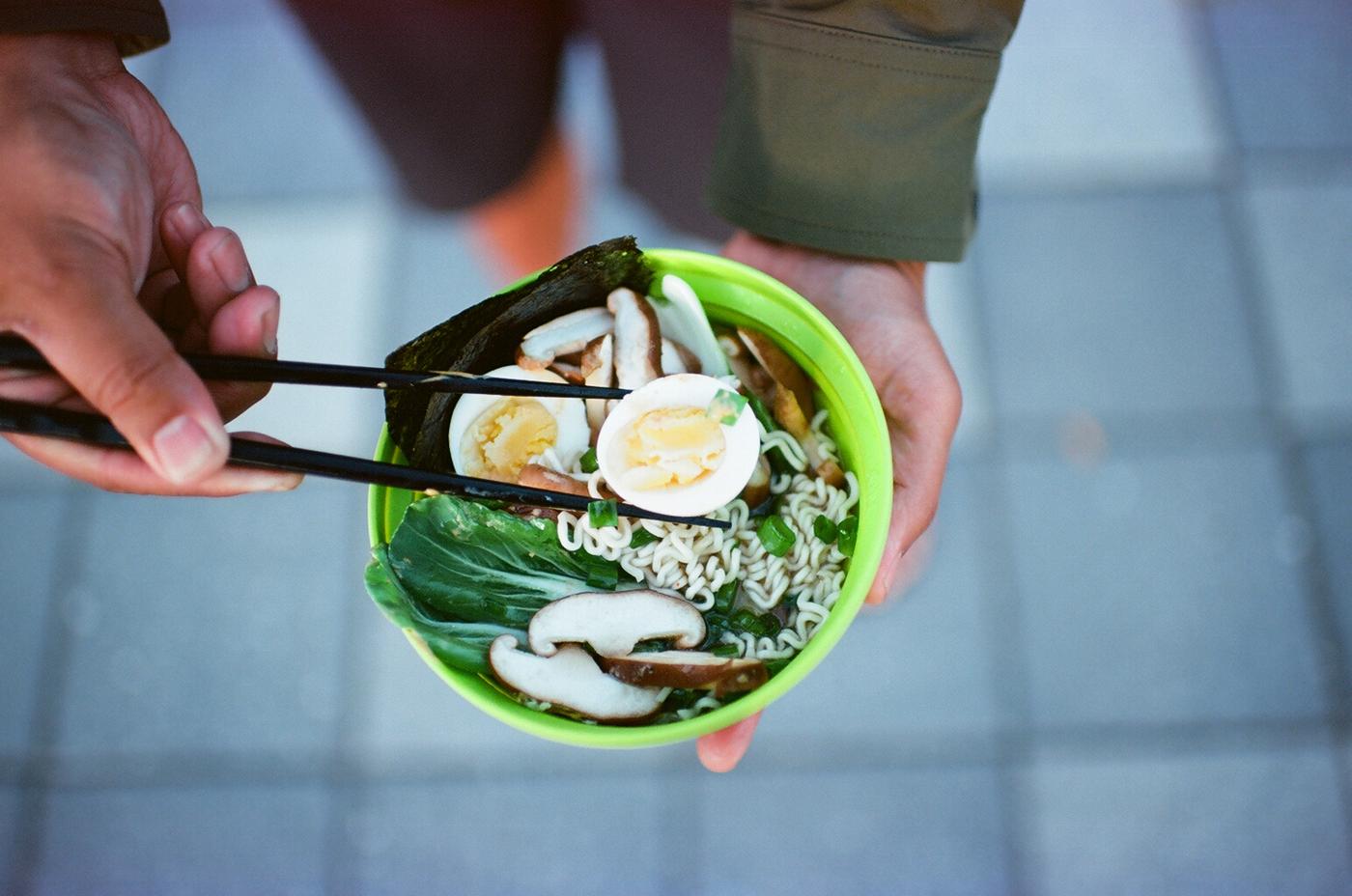 Jim is the Adult Education Manager at Bike Works. In his family of origin, food represented the complex relationship with his Filipinx parents. He always struggled with his parents’ inability to use words to show affection. The one phrase that represented their love was, “have you eaten yet?” That was the best they could communicate. Jim wanted more but could count on that question every time he went home. For Jim, Ramen outside represents this type of familiar affection – ”By sharing food and ingredients to help each other’s meals become more wholesome. Each time we do that, it is an opportunity for us to express love to one another.” At that second gathering, around food, ramen and community, he experienced something he didn’t expect at all — healing. 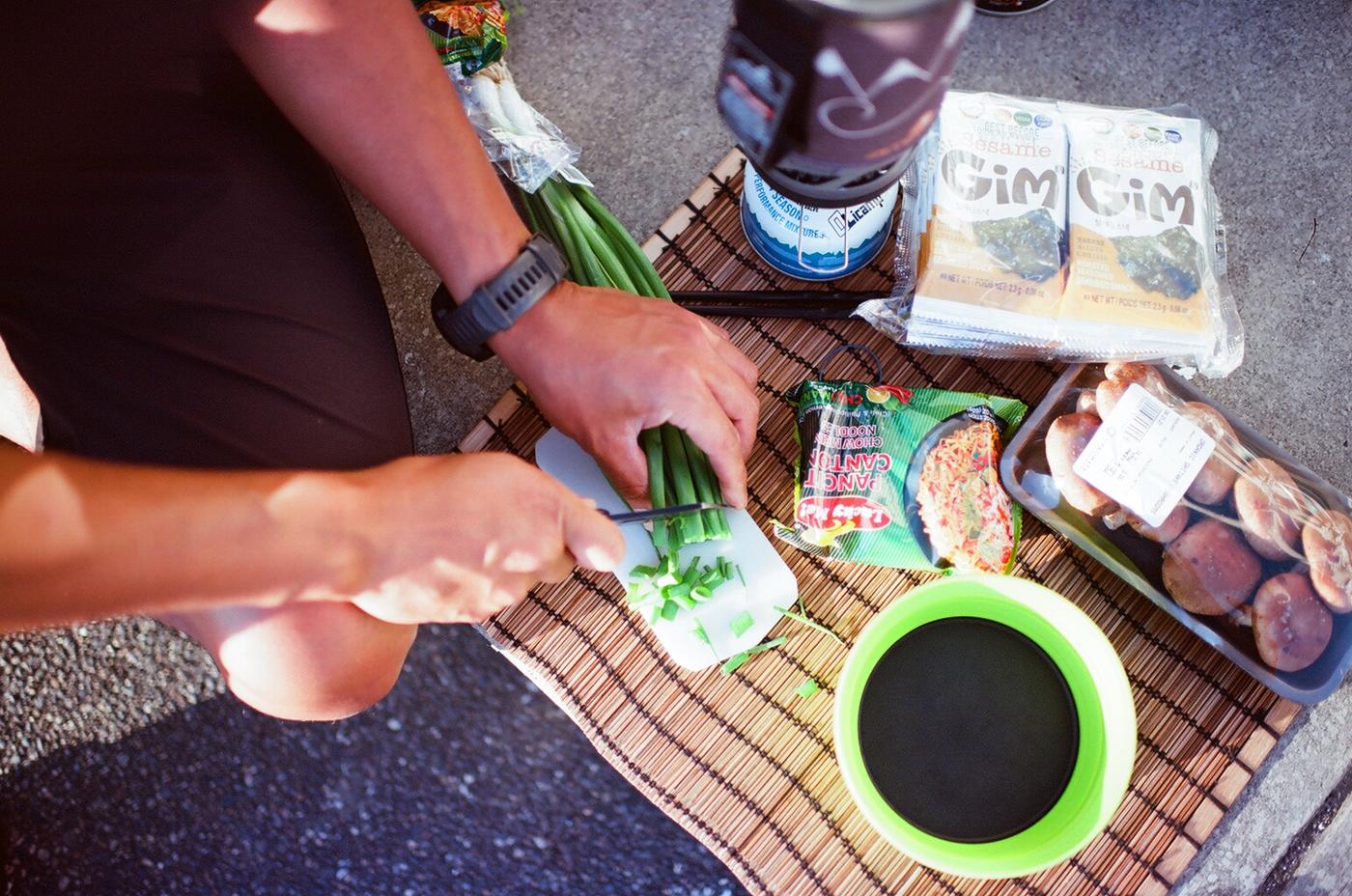 The ABC community has become a haven for Jim. He became involved because of his increasing desire to understand his heritage and how he fit into that as a first-generation American. He grew up in predominantly white communities. Jim never knew what to do with his guilt towards his own active and passive assimilation: His refusal to learn the language of his people, his decision to stop bringing cultural foods to school because they smelled differently than other kids’ lunches, his fear of going to school as a result of kids making fun of his wide, flat nose. All that pain was buried for years until he found ABC. Jim gets to feel all of his suppressed emotion while being generously supported by openness and belonging. ABC gives Jim hope that he will be as proudly Filipino as he can be. 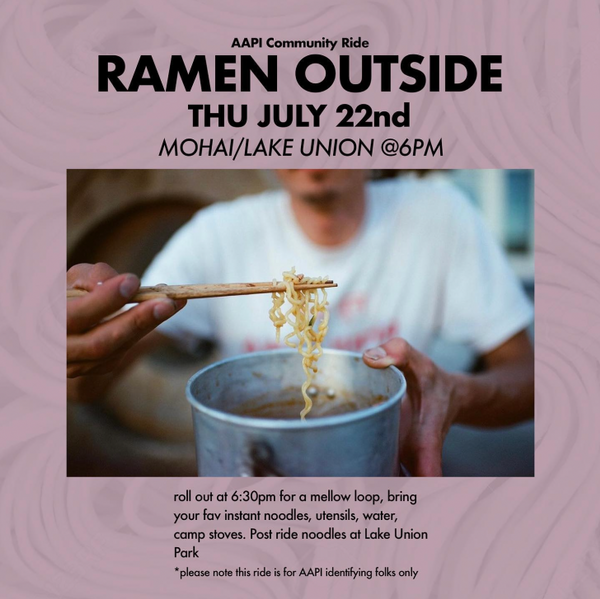 ABC meets on the first Thursday and third Friday of each month to gather around bikes and cook ramen outside. Where do they see ABC in a few years? For Kae-Lin, she thinks it’d be cool to see the club be self-organized, where people from different experience levels and cultures lead their own rides, workshops and experiences, with a focus on food of their choice. Other chapters in other cities in the near future would be super exciting. If you’re interested in starting a chapter in your city, feel free to reach out to Kae-Lin, Steve or Jim. They are also currently working on creating a more flattened structure organization with a core decision-making group and are working on a name change, stay tuned for updates!

*The group is currently undergoing a name change in order to better represent their diverse community, abc is used in the interim until they settle on a new name.

Additionally, ABC has denied previous media requests from national media outlets. We at the Radavist are grateful that ABC trusts us to share their story in a way that honors ABC’s community.