Platano Cycle Works of San Diego, CA was a highly regarded custom bicycle company that, over the years, has been steeped in lore and virtually unknown to those outside of the city’s rich hand-built bicycle scene of the 1970s and early 80s. When Josh was in Nashville earlier this year picking up the Bug Out frame he purchased from Amigo Frameworks and visiting builder Zach Small’s shop space (more on that coming soon), he couldn’t resist documenting Zach’s original Platano. Zach, who hails from San Diego, has collected, bought, and sold many vintage bikes over the years, but he insists he will never let go of the Platano. 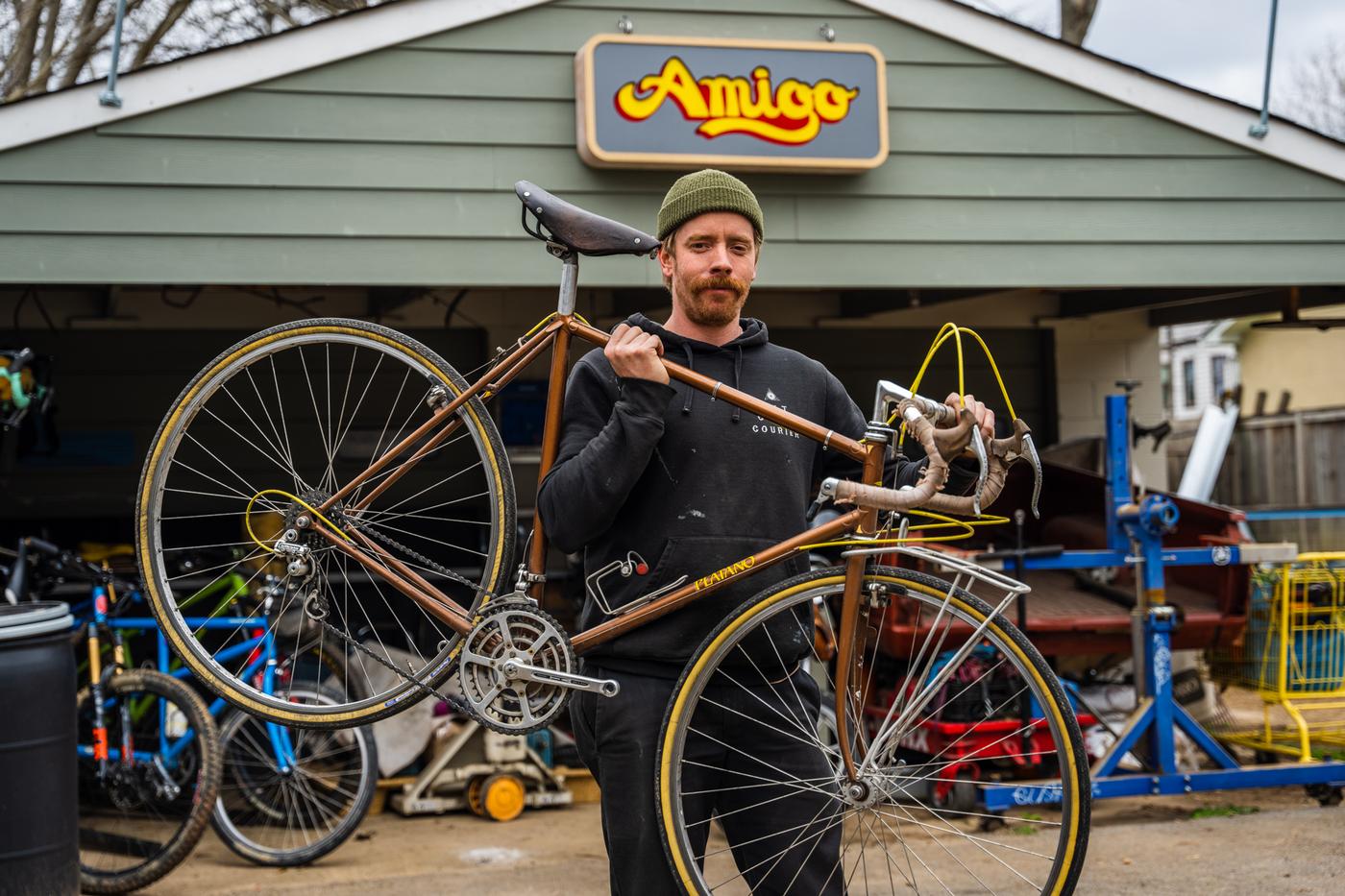 Platanos were primarily built for riders that participated in a local San Diego fast-paced group road ride that eponymously regarded themselves as “The Banana Gang.” Where exactly that name materialized from is up for debate. One likely nomenclature origin story contends that the 25-30, or so, riders in the “gang” would ride out of Mission Valley in San Diego, complete a 25+ mph paced 70-mile road ride, and then eat bananas (platanos) and drink “Mexican” bottled Coca-Colas at their favorite la tiendita. Who knows if that is true, but I have always enjoyed the tale. Regardless, the Banana Gang and those that participated in the Banana Ride (while not having official “members”) solidified their status with a custom bicycle built under the Platano brand. Besides local shop folklore, the only known documented history of the Banana Gangs’ existence is from an archived 1987 LA Times article detailing the group’s tenacity for being some of the fastest folks in San Diego. 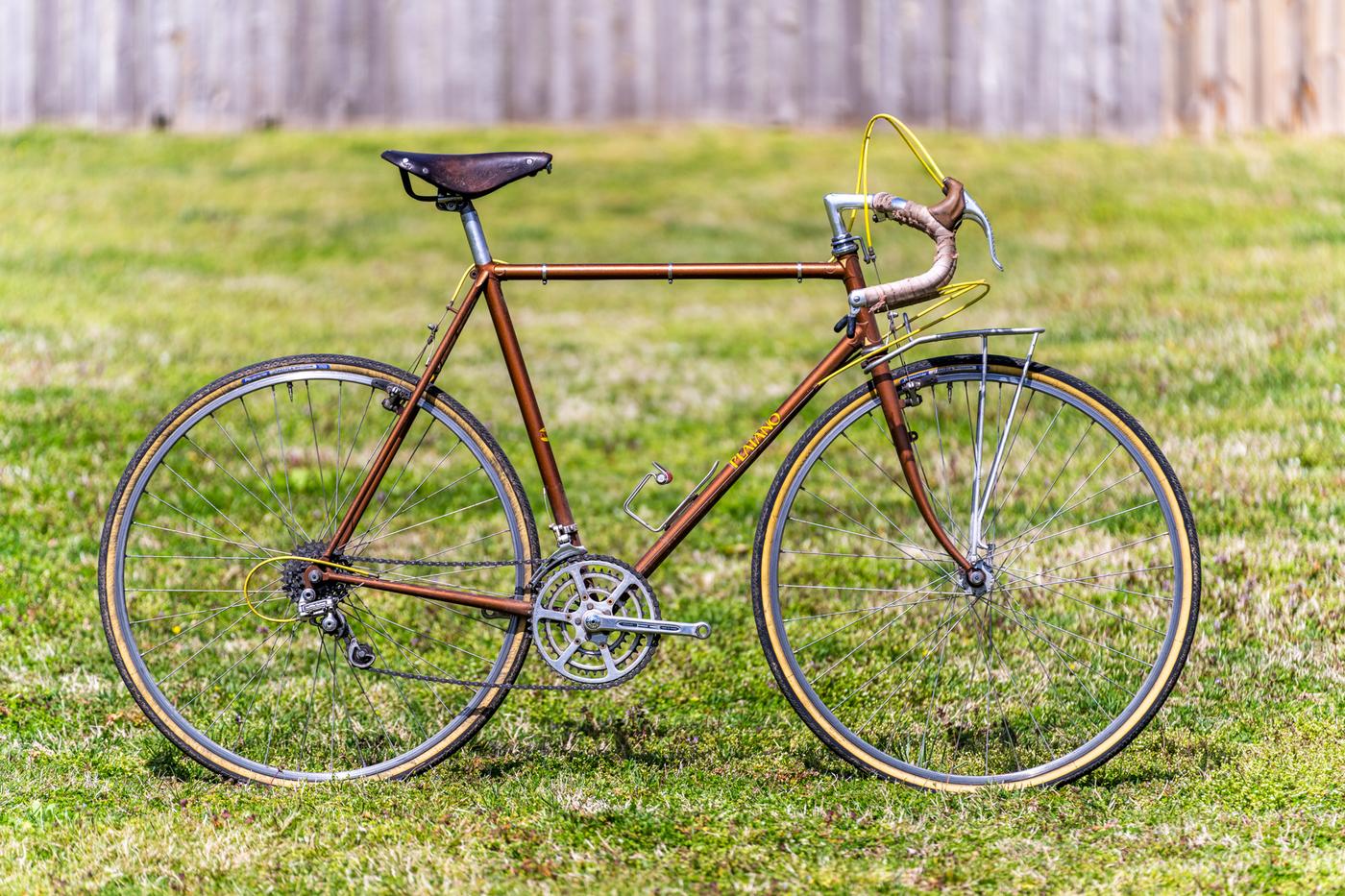 Bruce Hecht and Mike Jakiela built and painted the frames produced under the Platano moniker. According to Joe Bell, Bruce was an engineer at Hewlett Packard, an accomplished amateur cyclist, and – based solely on the limited number of Platano frames he built – an incredible craftsman. Bill Holland was responsible for assembling Platanos exclusively for Banana Gang riders. At the time, Holland was also crafting custom cycles and owned Casa de Oro Cycles (debatably the best bike shop in San Diego). Interestingly, Joe Bell was painting bikes during the Platano era behind Holland’s shop but was only commissioned to paint a few of them. My frame is said to have been painted by Jakiela. 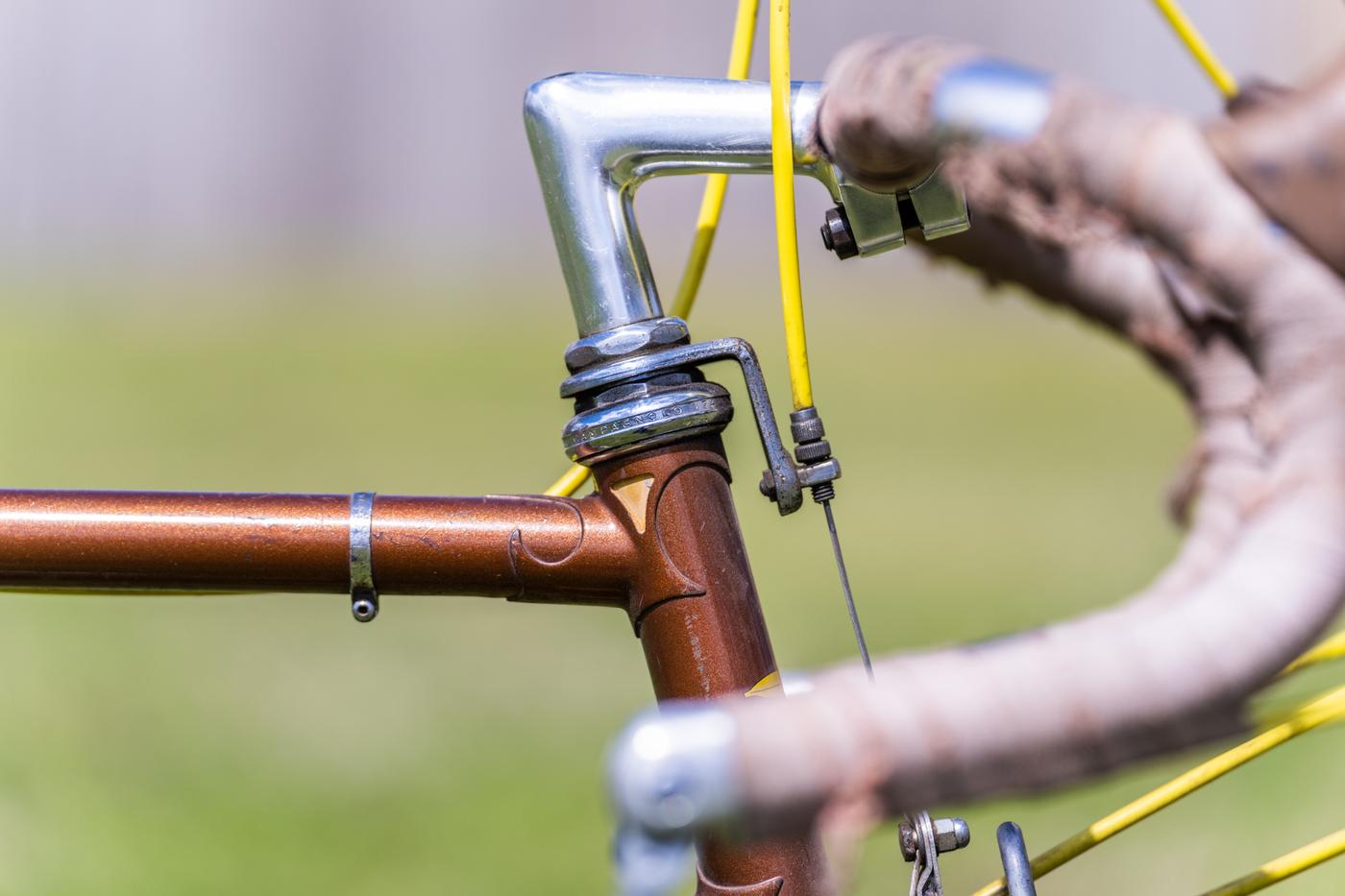 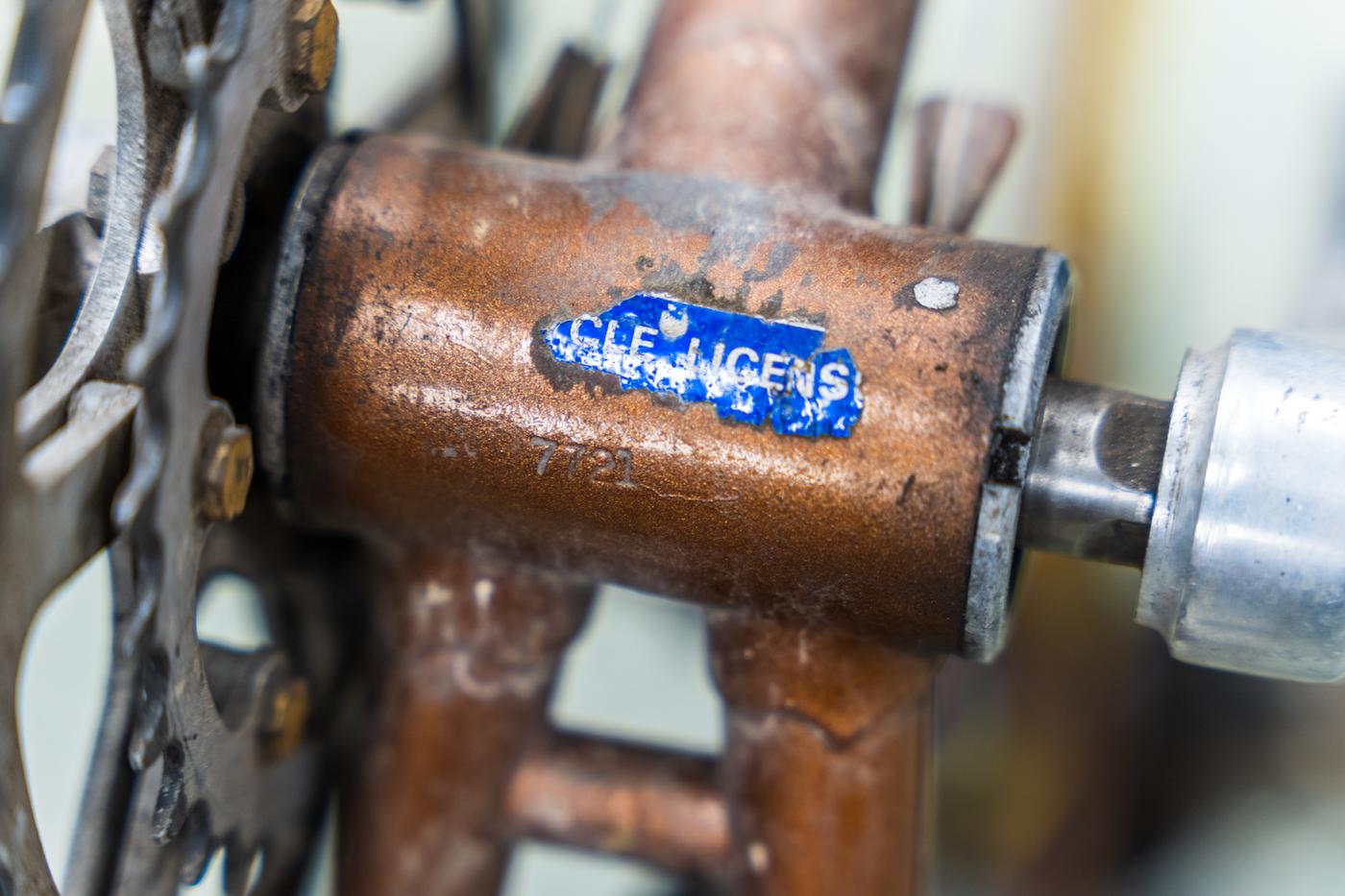 My Platano or, as I like to call it, my “Banana Rando” is stamped 77 21, which is the year and sequential number of the total number of frames produced. I bought this bike about ten years ago when an older gentleman came into Mission Hills Bikes, the shop I wrenched at, and offered to sell it. He knew it was rare but also that it would be hard to find the right buyer. If I recall correctly, I purchased it with a loaned $300 from my boss, who wanted to buy it first but passed when he realized it wasn’t his size. 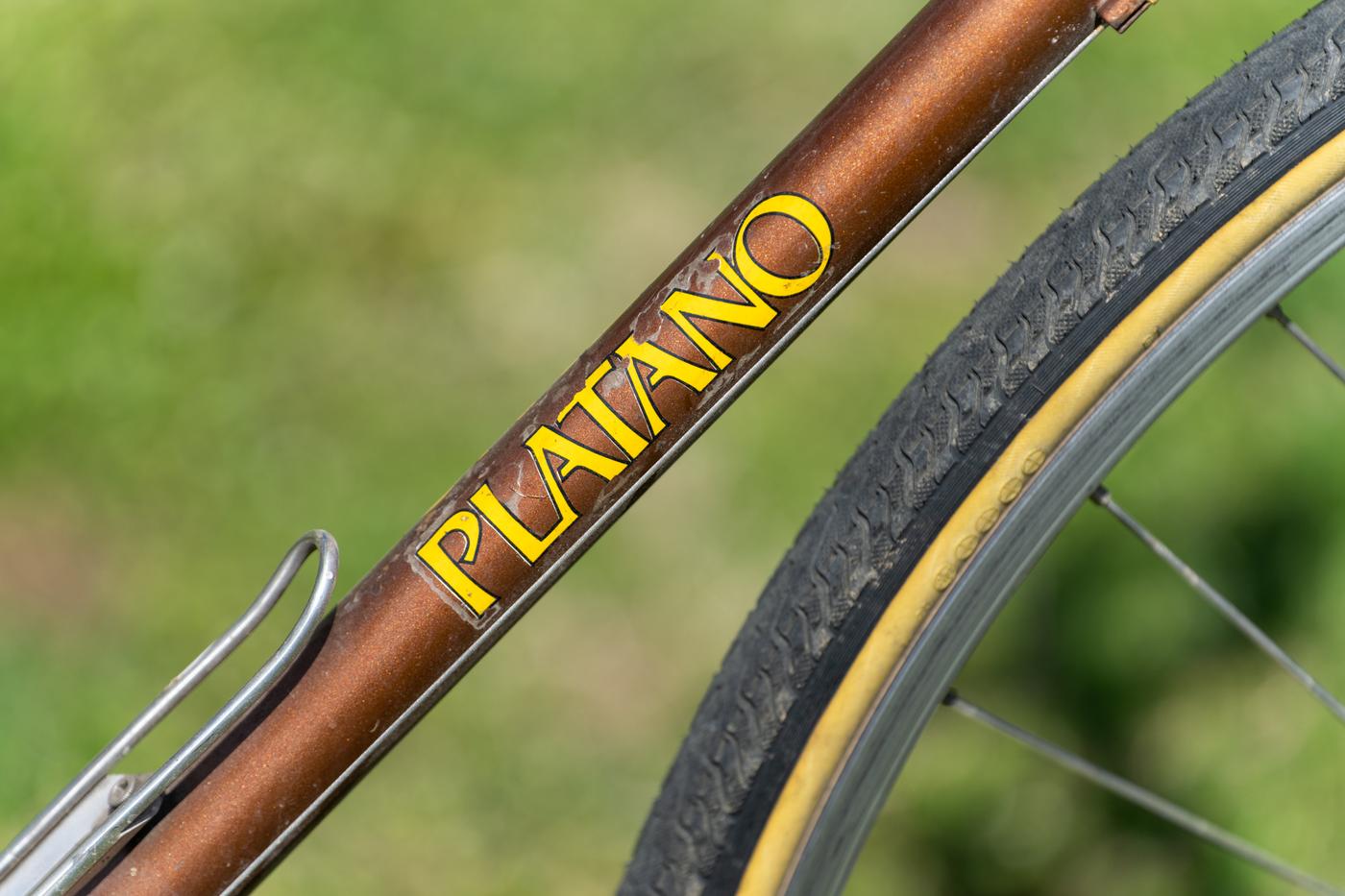 I was instantly infatuated with the bike – its paint job a pearl brown with yellow decals that shined like a too-ripe waxy browned banana and also reminiscent of the original San Diego Padres uniforms from the 70s. Without knowing its exact history, I knew it was cool and proud to add a bike built in San Diego to my collection. Shortly thereafter, I rode the bike into Joe Bell’s paint shop, where I had been part-timing on my days off from the bike shop, and learned about Platano Cycle Works and the riders that christened its name. 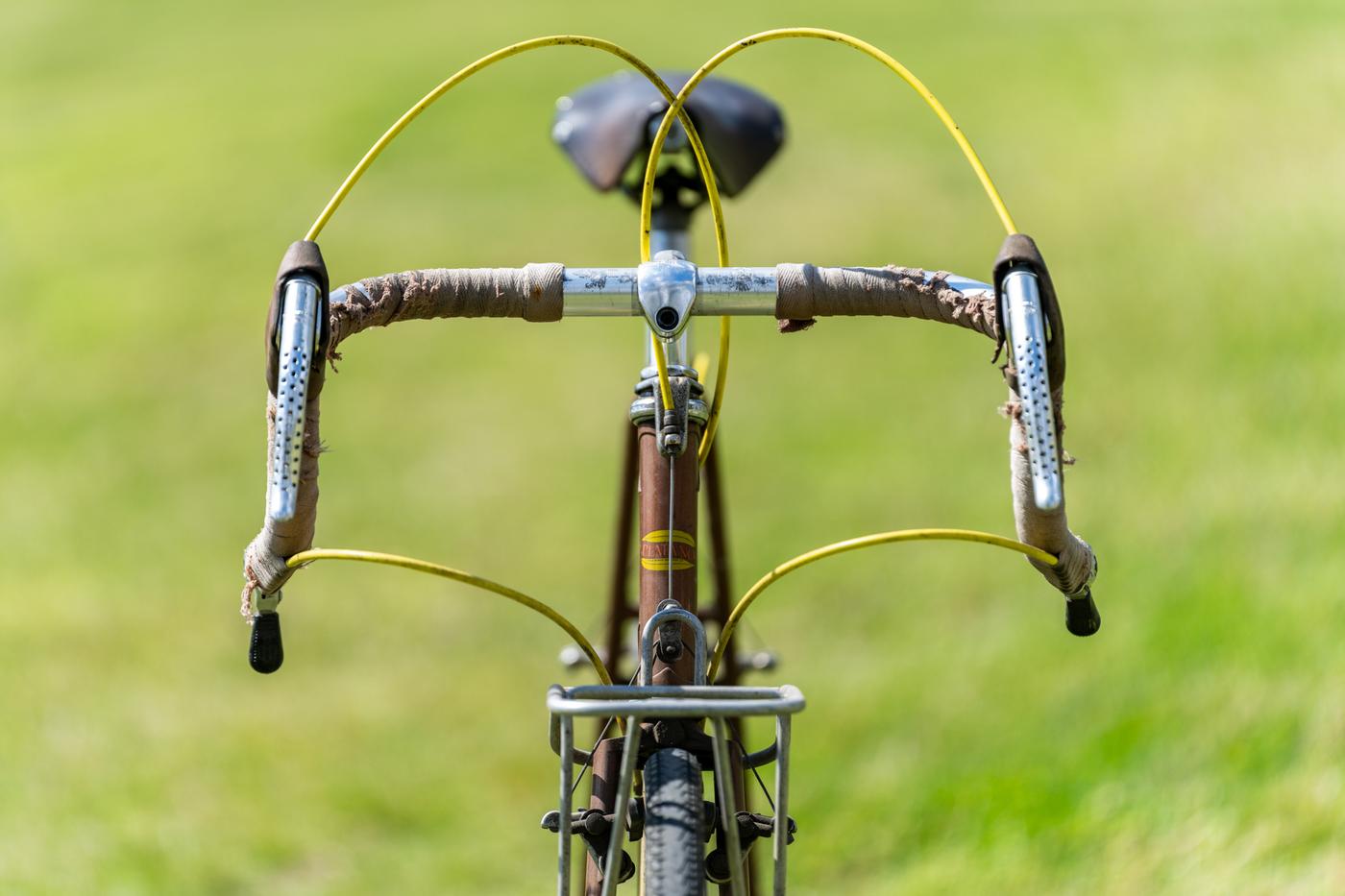 Upon entering Joe’s shop with my newly acquired cycle, his jaw dropped, and he was nearly shaking with excitement. I think his words were: “I will pay you double what you got that bike for.” It was like a car guy seeing the muscle car they pined for as a teenager. Unlike a Dodge Barracuda with all 440 hemispherical horsepowers that nearly anyone behind the wheel could be fast on a straight tarmac with, you had to be fast in the first place to own a Platano. From what I gathered from Joe, you had to be a certified badass to own one. 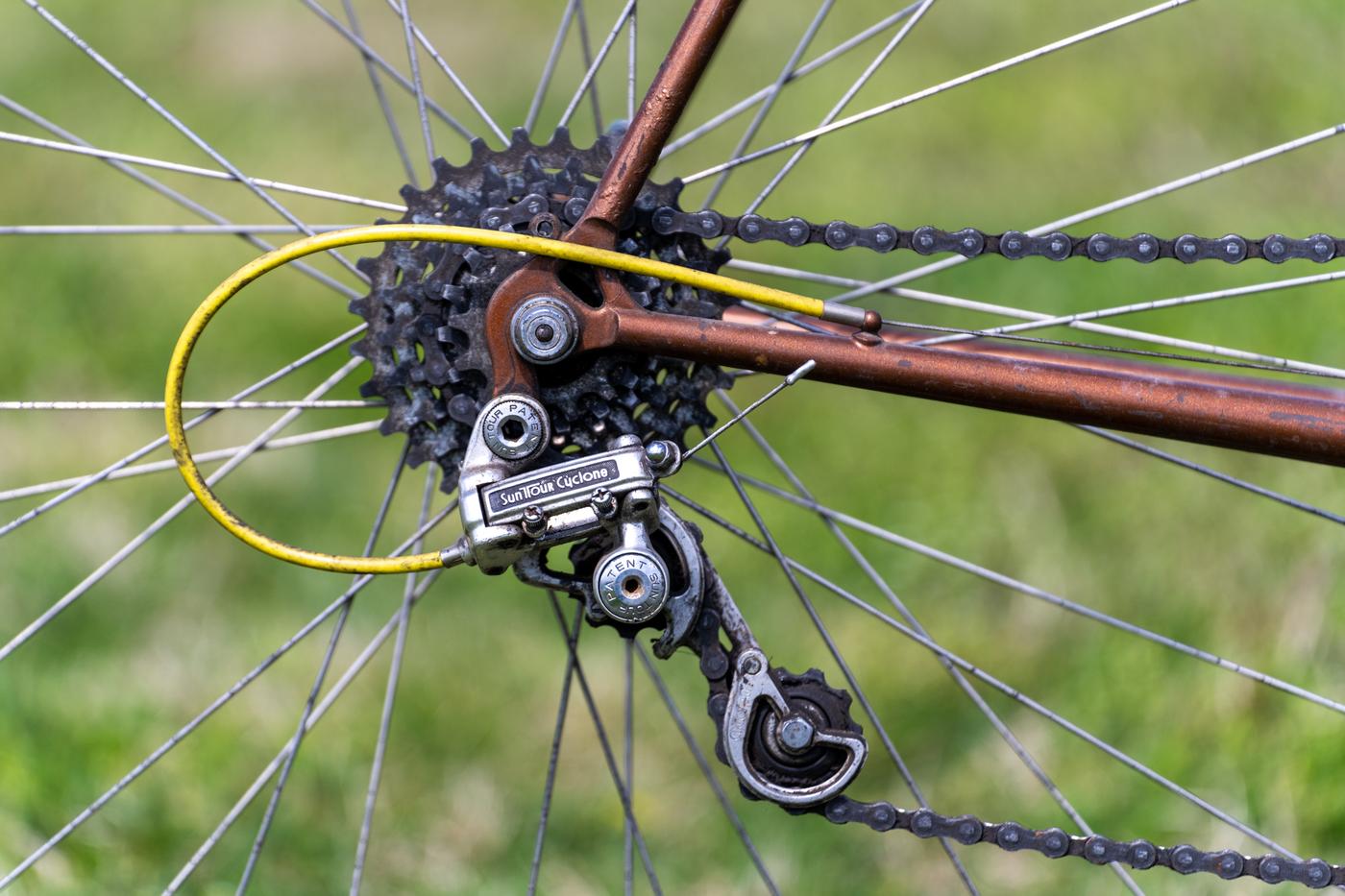 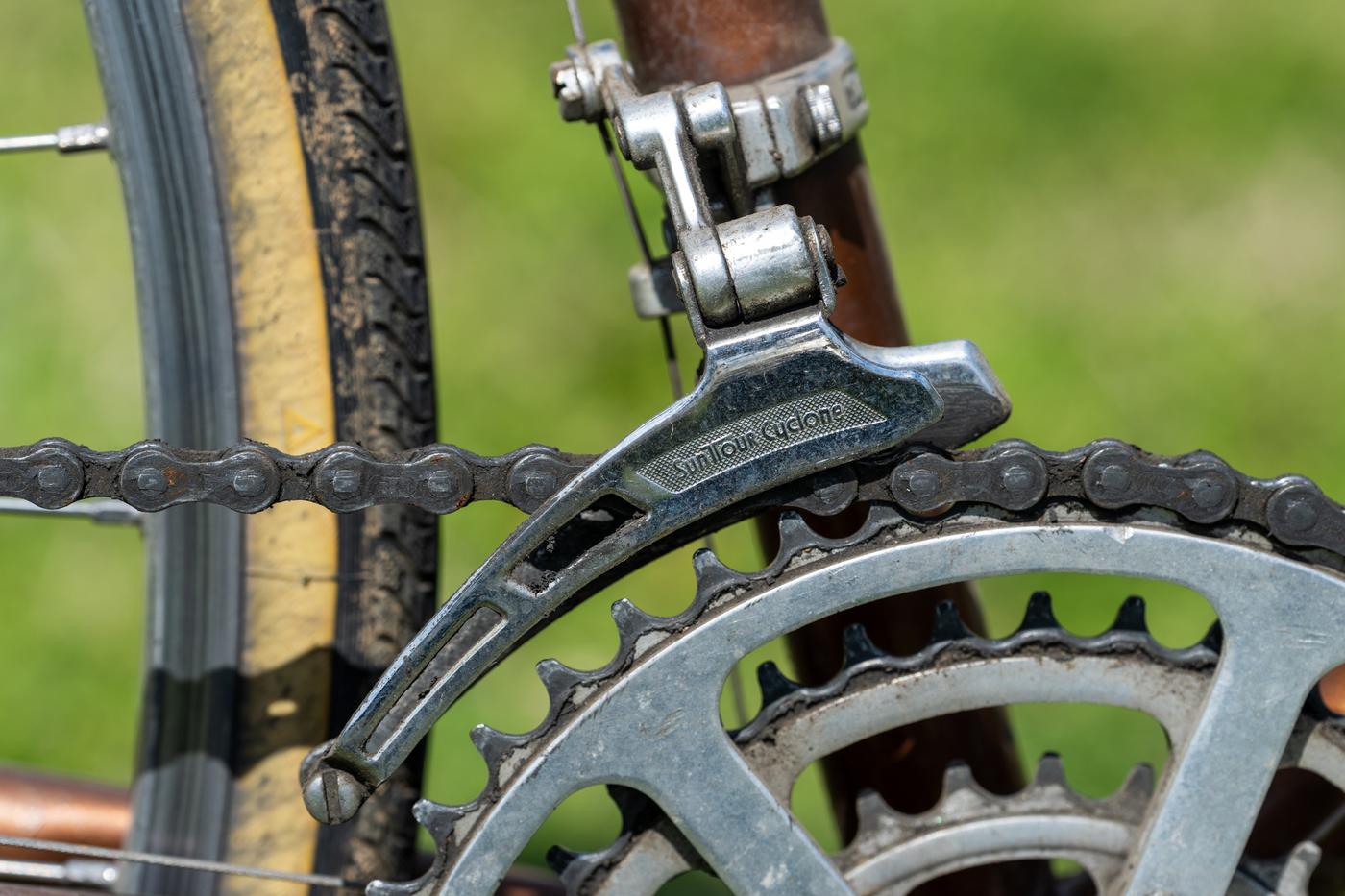 Whoever owned initially and built up this bike knew what they were doing. While it doesn’t have a flashy Campagnolo Nuovo Record groupset (which would have been the most respectable of the era), it features a mix of what could be considered mechanically superior parts but also somewhat obscure to even slightly more seasoned enthusiasts. SunTour Cyclone derailleurs, while functioning far better than the Campagnolo alternatives of the era, were only released two years prior to this bike’s creation in 1975 and would have only been a choice for someone keenly aware of the market. 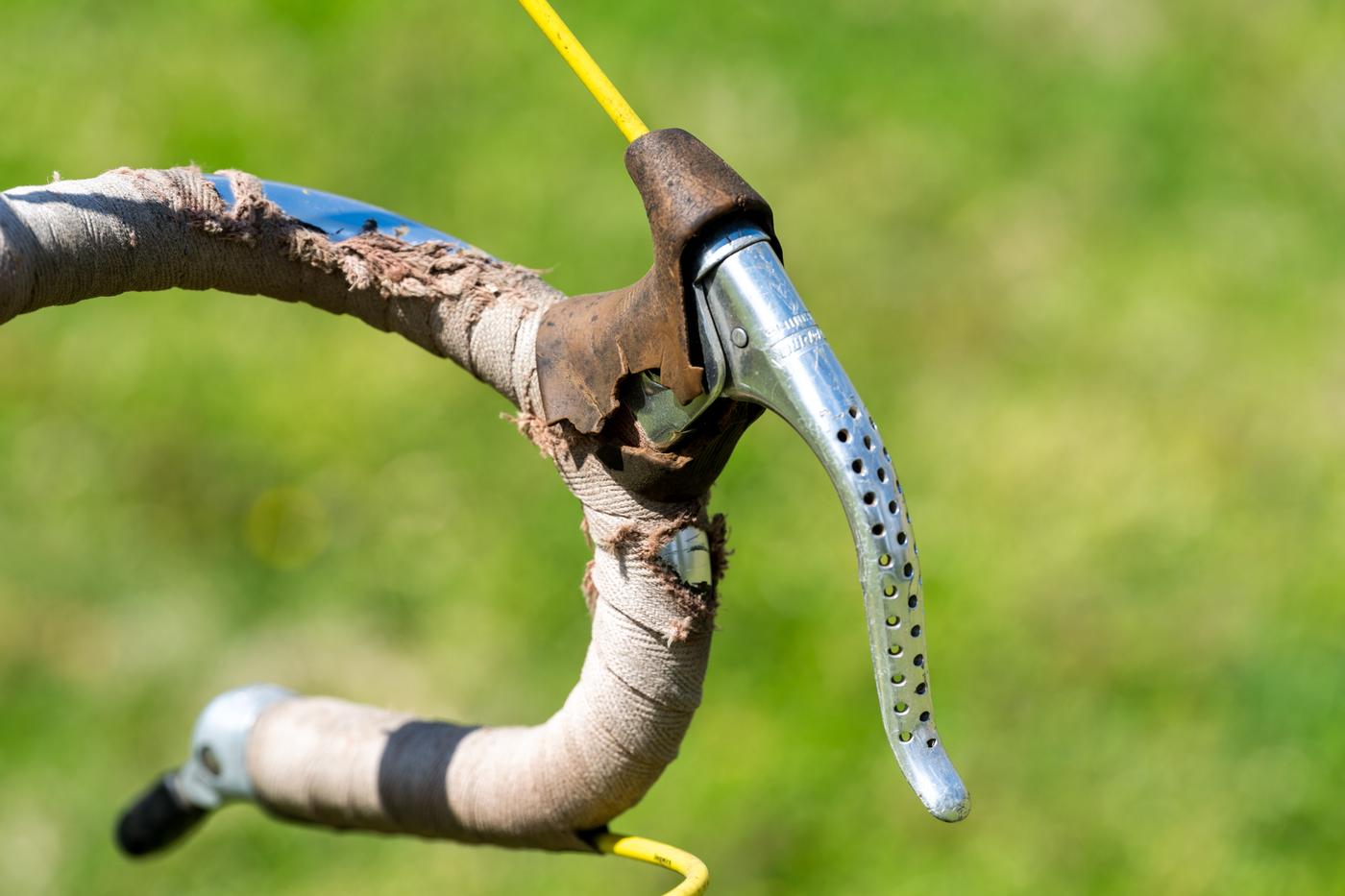 Original Shimano Dura-ace levers actuate Dia-Compe cantilever brakes and the French-made triple TA crank, first-generation Phil Wood hubs, and a little Campagnolo bling with Nuovo Record seat-post and their headset were all the best parts of the era. Even the choice of using the 27 x 1/4″ wheel standard instead of the already prevalent 700c may seem odd. Banana Gang riders often headed out to Rosarito and Ensenada, Mexico, or rural areas of California, where 27 x 1/4″ tubes and tires would have more available than the European standard, keeping them on the road after flatting in remote areas. 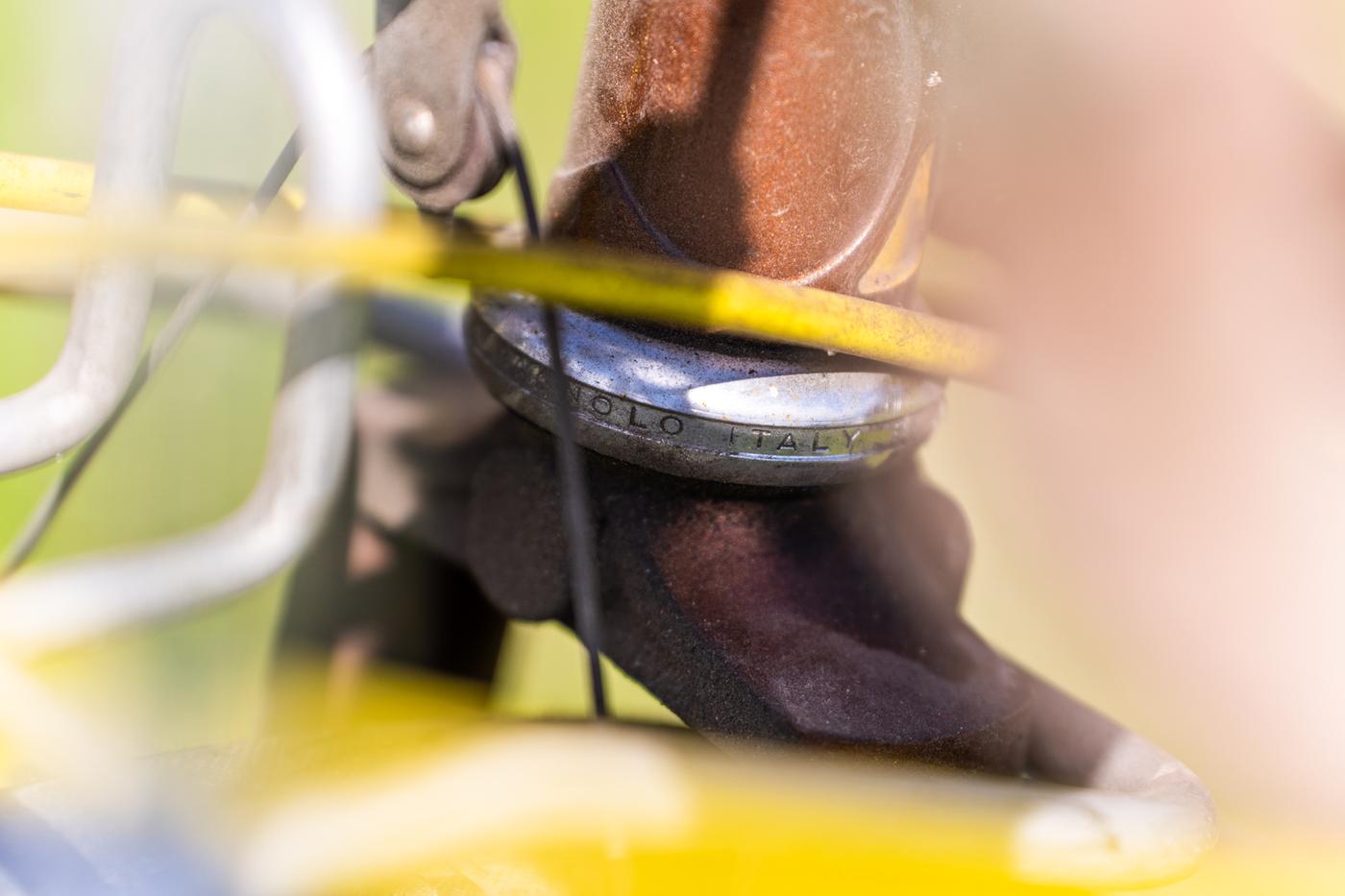 All-in-all, the build is just thoughtful. I’ve personally ridden it thousands of miles as-is and I regularly scour eBay and parts bins so I have exact replacements if I wear something out. 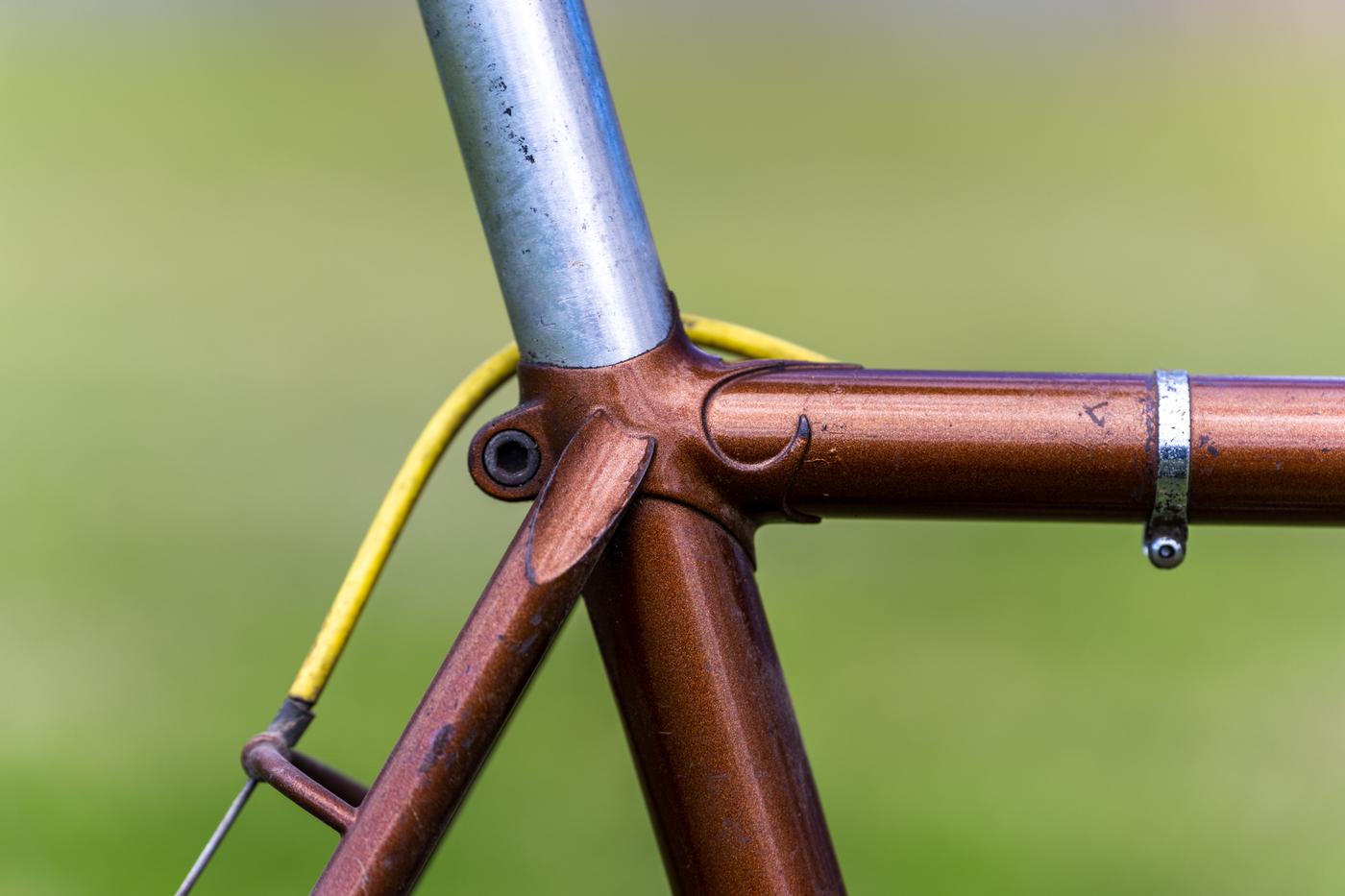 The frame is masterfully built and I don’t use the word masterfully lightly. The Haden Royal Sovereign lugs are perfectly thinned and, where the seat collar would have been stamped, the builder brazed and shaped a M6 bolt seat collar. This feature was typically only added by ultra-particular craftspeople. The tubeset is unknown, but it’s given me experiential knowledge of what the term “planing” actually means: the frame moves with the rider. 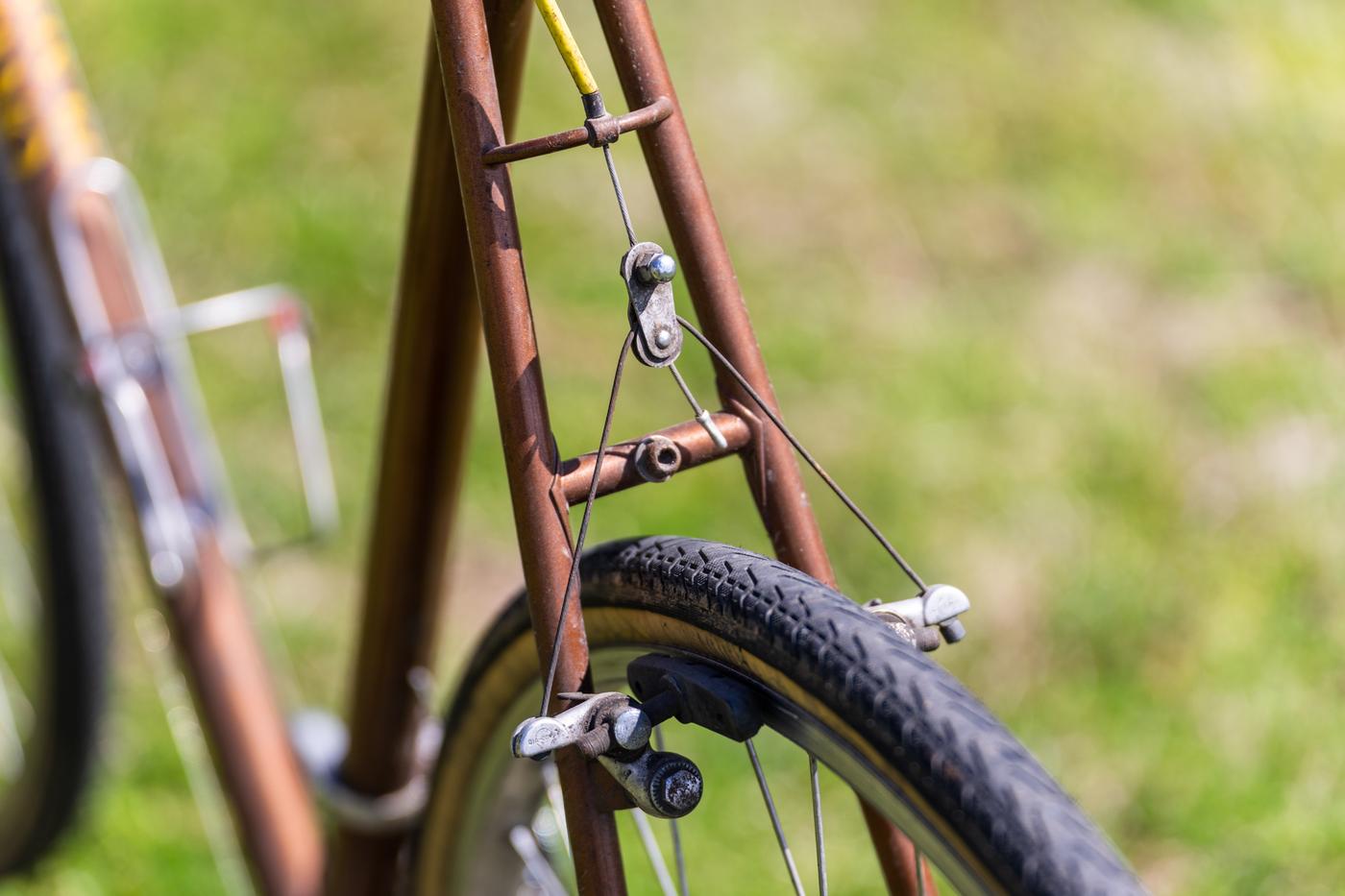 I’ve owned a lot of classic road bikes over the years and, at one time, had amassed a decently-sized collection of bikes that were mostly built, or connected to, Southern California (Tesch, Medici, Eisentraut). Unfortunately, during the pandemic I made the tough decision to sell most of them, but this Platano will always stay with me. I hesitate to call it a bicycle perfect, but I haven’t found another that rides quite like it, and, for years now it’s been my favorite. 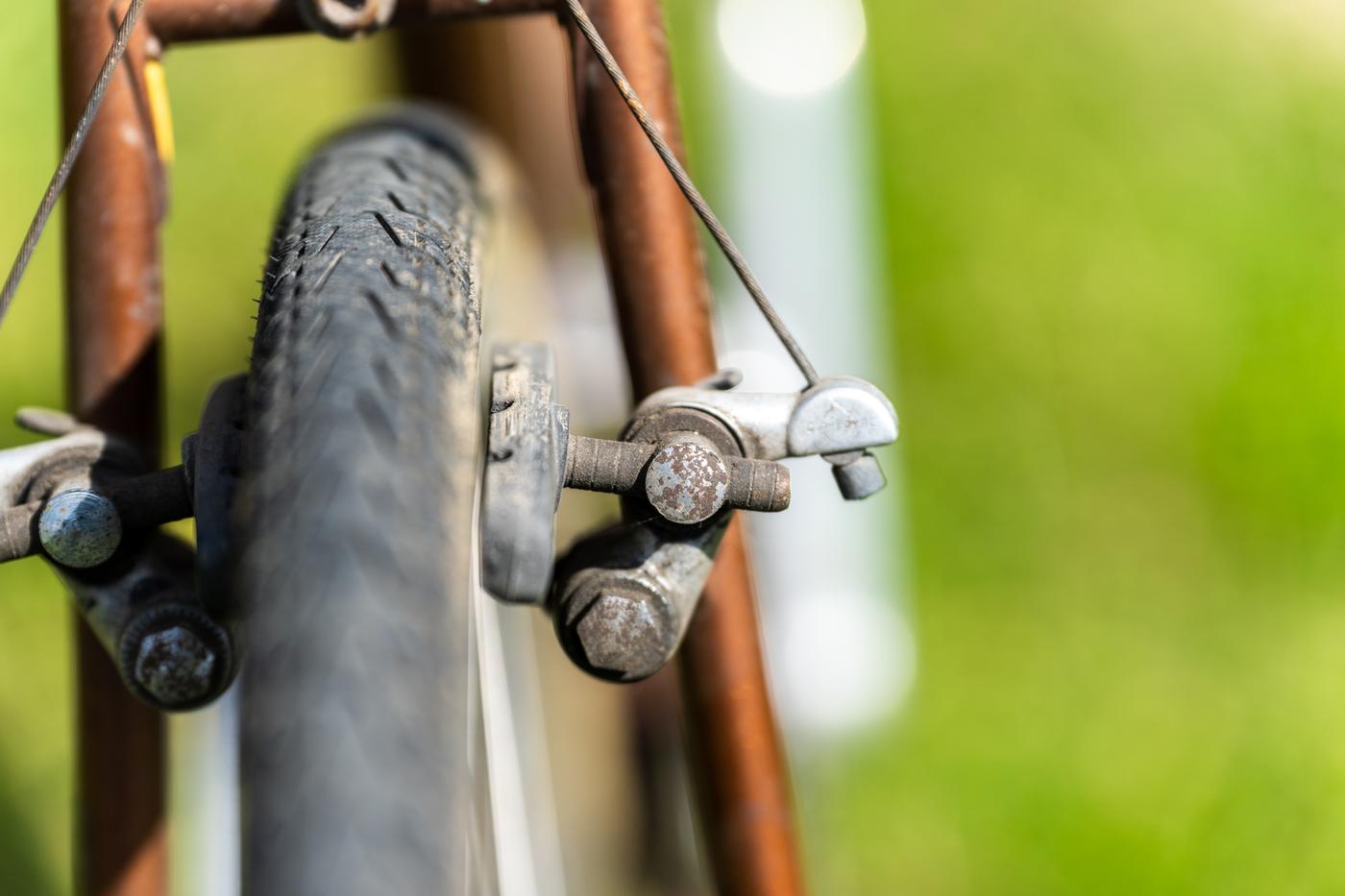 I once met Bruce Hecht on a chance encounter. He came into Mission Hills Bikes to air up the tires of a Platano he was riding. Many years my senior, I was super excited to tell him that I also had a Platano. He was mild-mannered and seemed taken aback by some weird young mechanics’ enthusiasm to know more about him and the lustrous Platano bicycles. In response, he simply told me he had moved to Oregon, no longer built bikes but was actively riding, and then left the shop. A lot of those riders mentioned in the LA Times article have now passed, but Bruce may still be around (Joe’s trying to find me a number). I’d really like to track him down and dig even deeper into the history Platano and the Banana Gang. Until then, the story lives on with the few who’ve heard it like me. 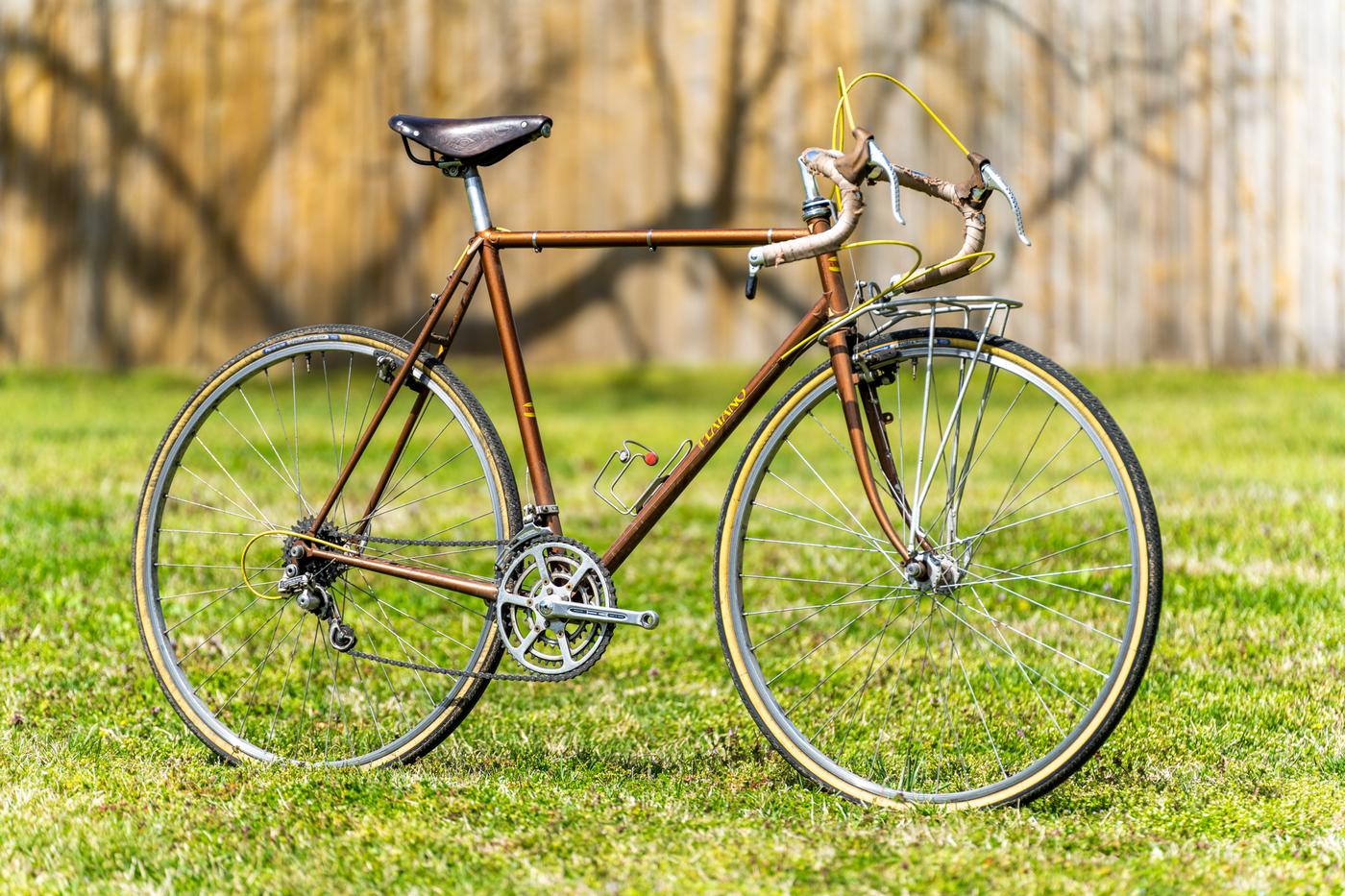 Interestingly, the Banana Ride never ended, it just changed names. The Chili’s Ride, which meets in Mission Valley at of all places a Chili’s, is one of the fastest-paced group rides in the county, with riders from pro-teams like Jelly Belly regularly jumping in. I remember my first few rides trying to hang on, getting dropped, bonking, and hobbling home. The feeling of finally holding onto the pack for the whole ride was one that exhilarated me as a young cyclist. As a kid riding cobbled together “old” lugged road bikes – hand-me-downs from working in a bike shop – these rides earned me the attention of some seasoned riders. I may not be worthy of the Platano bike or Banana Gang membership, but I’m proud to own this piece of local history and I continue to ride it as originally intended – hard and fast.