I didn’t spend a lot of time planning this trip. I had tickets to Wyoming, a borrowed rental car, a new Soma Grand Randonneur (checks spelling of randonneur) with clearance for knobs, and a friend with a break during architecture school. “What route are you thinking?” Asked Will.

“Still working on that.”

This isn’t my first hastily planned tour. I pulled up RideWithGPS and found the Around The Rock Route close to where we were planning to stay for a few days. The route was developed by the friendly folks at Fitzgerald’s Bicycles, and it circumnavigates the Teton Mountain Range. The route is roughly 150 miles and is equal parts gravel road and pavement. The Fitzgerald team hosts a group ride along the route during the summer solstice, but Will and I opted to break the route into three days (to keep it gravel casual). 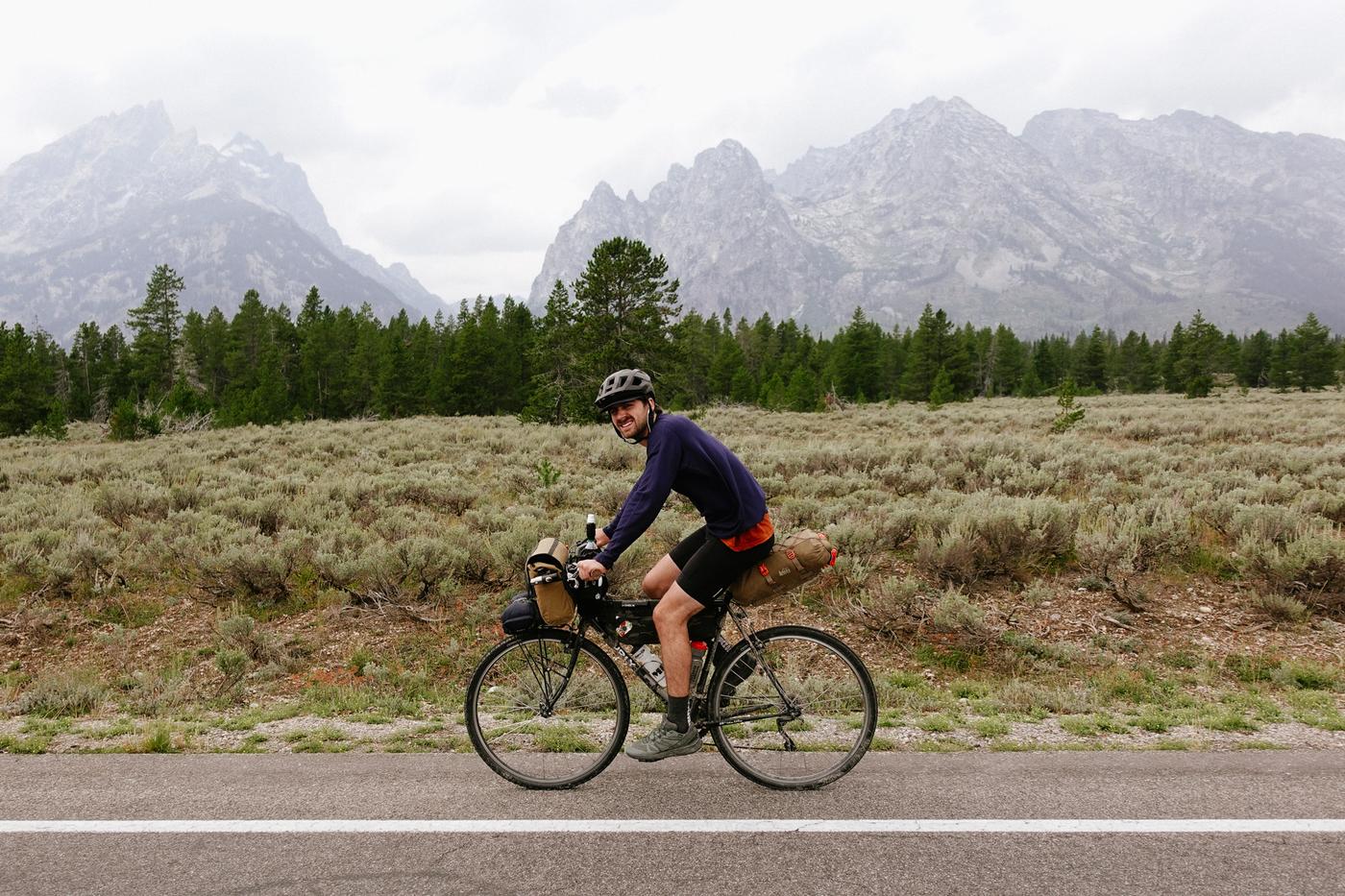 We packed out bikes, flew into Jackson, and spent a few days visiting my family. The weather was great so, in the mornings, Will and I would find a landmark close by on Gaia GPS and try to ride forest service roads to check it out. We had mixed success finding our landmarks, but the roads were great. The day before we planned to head on our tour the weather took a turn. When we left Tennessee, the highs around the Tetons were in the 70s. Suddenly the temperature was barely climbing into the 50s, and we were both under-packed. We drove a few hours back to Jackson and found a used gear store to buy some cheap base layers. Buying used ski clothes became a theme of the trip. The next morning, we started riding in pretty heavy rain. My family was staying near Irwin, ID so we had some off-route highway miles up HWY 31 to get to Victor, ID where we would join up with the ATR route. Fog hung heavy and we never saw the mountains for the first day. Once we made it to Victor we took shelter in a cafe. 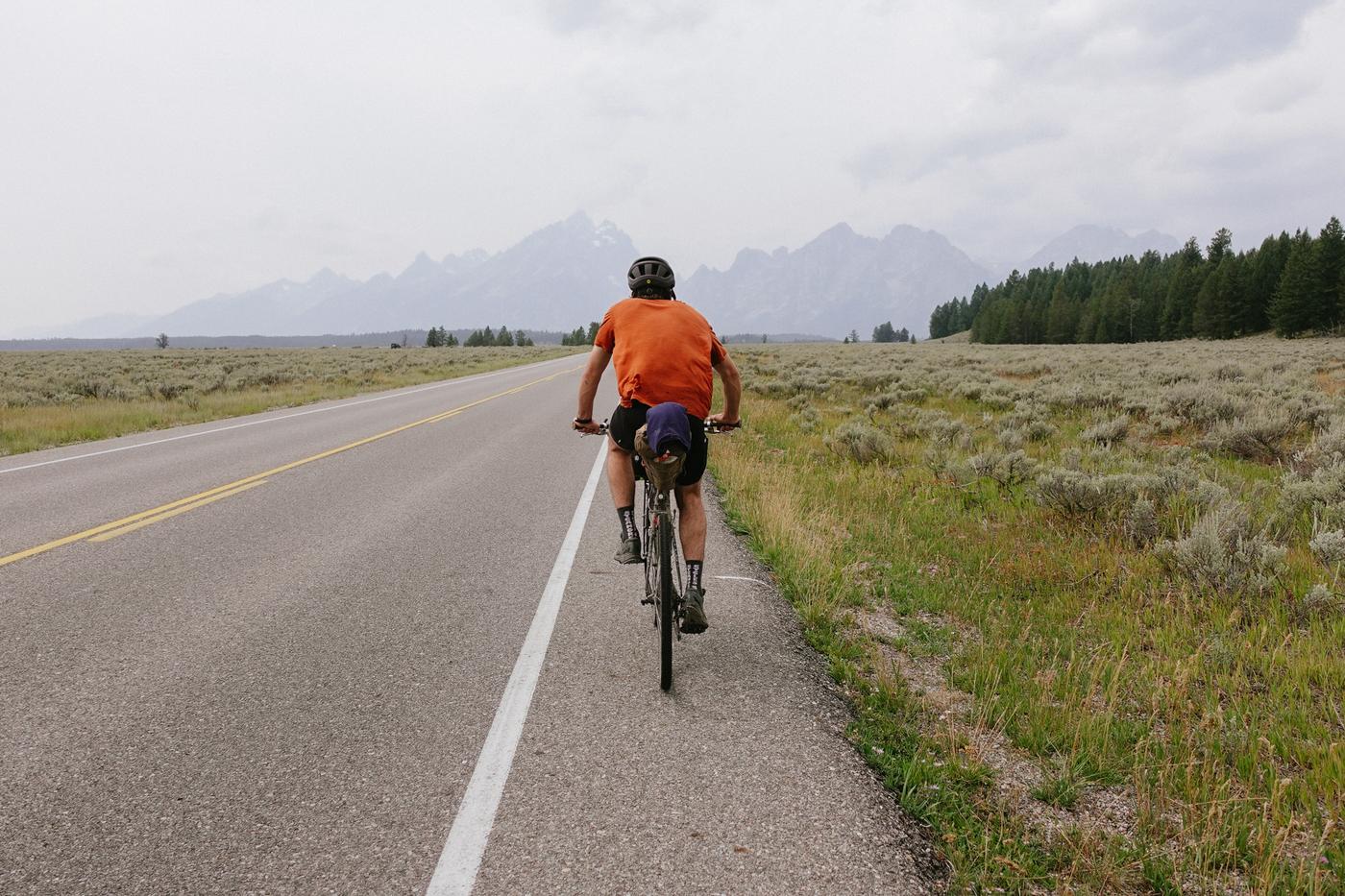 But rolling into town I ran into a new problem. It felt like my bottom bracket had play, so once we made it under some shelter I gave my bike a once-over. My drive side bottom bracket cup had unthreaded significantly. Was the unthinkable happening – a problem with a BB-UN55? 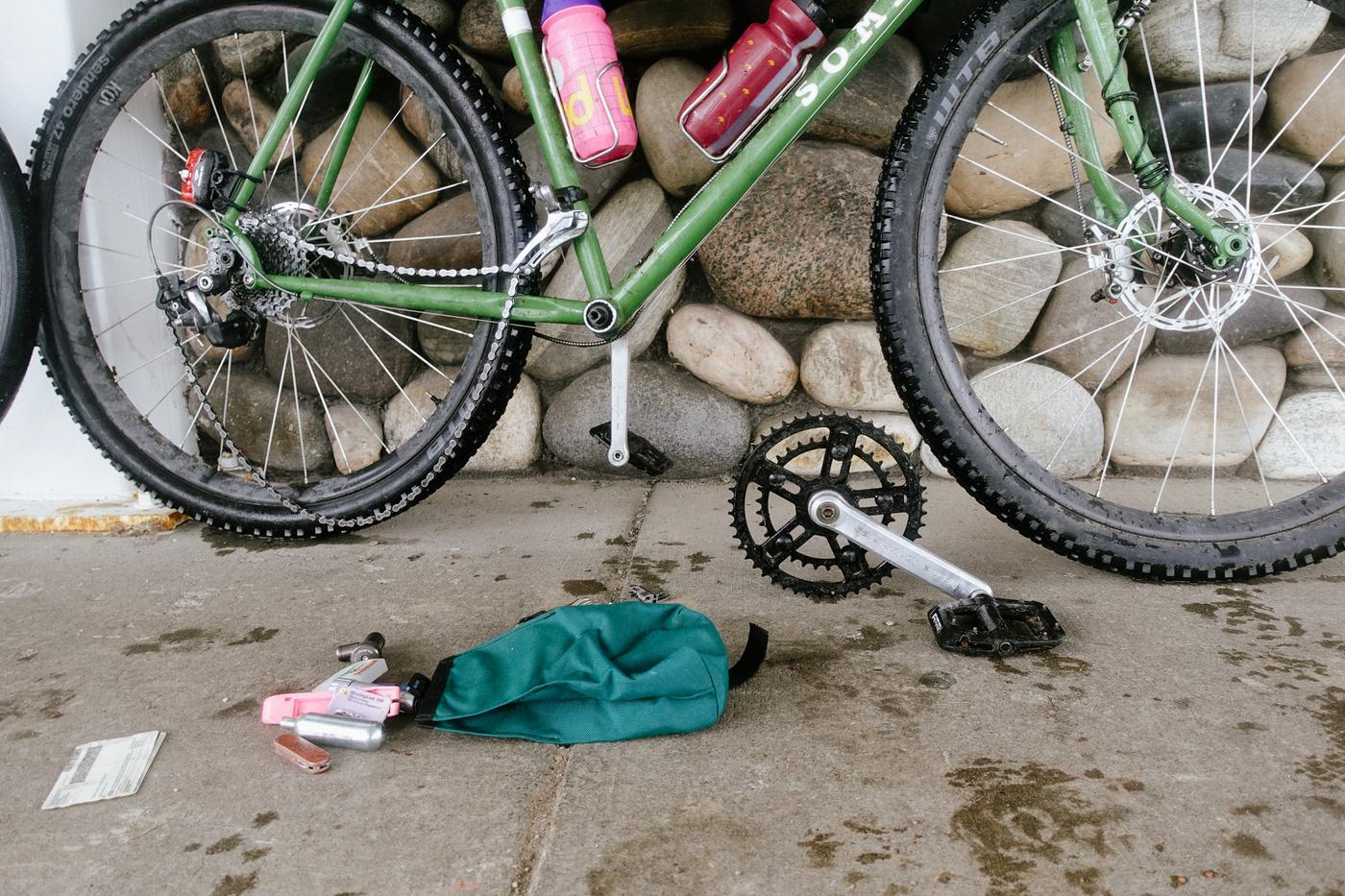 I figured I hadn’t torqued it properly and didn’t give it much thought. Fortunately, there was a Fitzgerald’s Bicycles location just down the road and the mechanic there, Harrison, was incredibly helpful. He complimented my build (so you know I was floating) and expressed some trepidation on the unthreaded bottom bracket cup. “That really shouldn’t happen,” he said. Or something like that. Regardless, he yeeted on my bottom bracket and told us about a good bivy spot down the trail. Will and I were off to ride into the rain. On the way out of town, we found another used ski gear store, picked up some more layers, and headed on. We made it to camp that evening after averaging 8 mph on soggy gravel. We slept great. 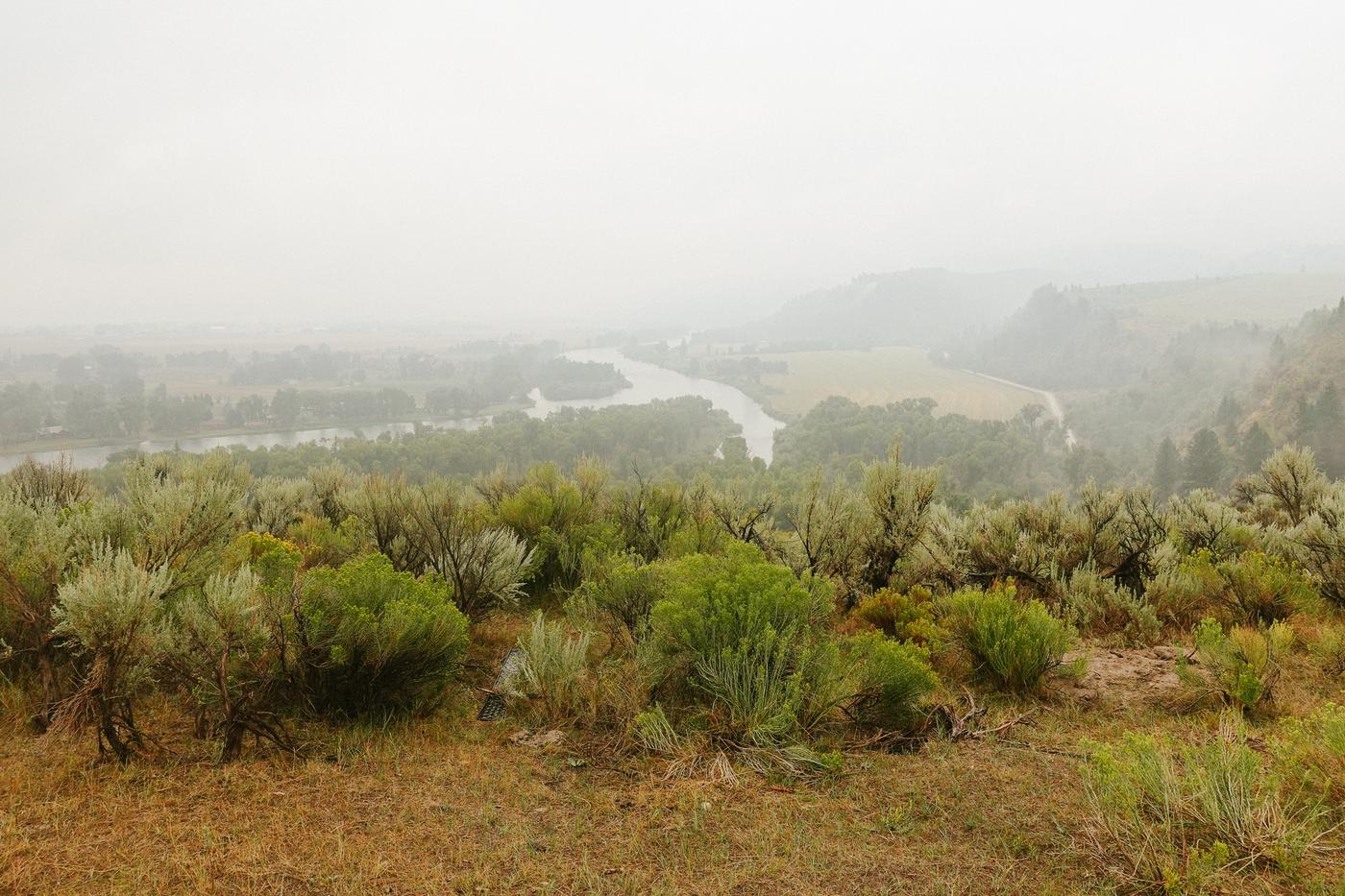 We woke up to more rain and fog, and my bottom bracket was loose again. I pulled off my drive-side crank arm and used tent stakes to tighten the bottom bracket cup (which I would do every ten miles for the rest of the trip). We filtered some water, made some coffee, and continued our trip north. The northwest section of the route is excellent. Gravel roads guide you between cattle grazing land and dense forest. At a few points, we were stopped in our tracks by cattle blocking the road, and once a bull confidently let us know we were not welcome to pass. He eventually moved on, and so did we. The route began to gain elevation as we turned east. We traveled along Ashton-Flagg Range Road with Glade Creek to our east, and even the persistent rain couldn’t keep our spirits too low. The road was beautiful, and soon we were traveling alongside the iconic Snake River. As our day came to an end, we found a trail Harrison had mentioned.

Just before Ashton-Flagg Road meets up with Highway 191, there are a series of beautiful hot springs up a trail a bit (they’re well known, so I don’t mind mentioning them here). We had the springs to ourselves in the light rain and finally, the mountains became visible. 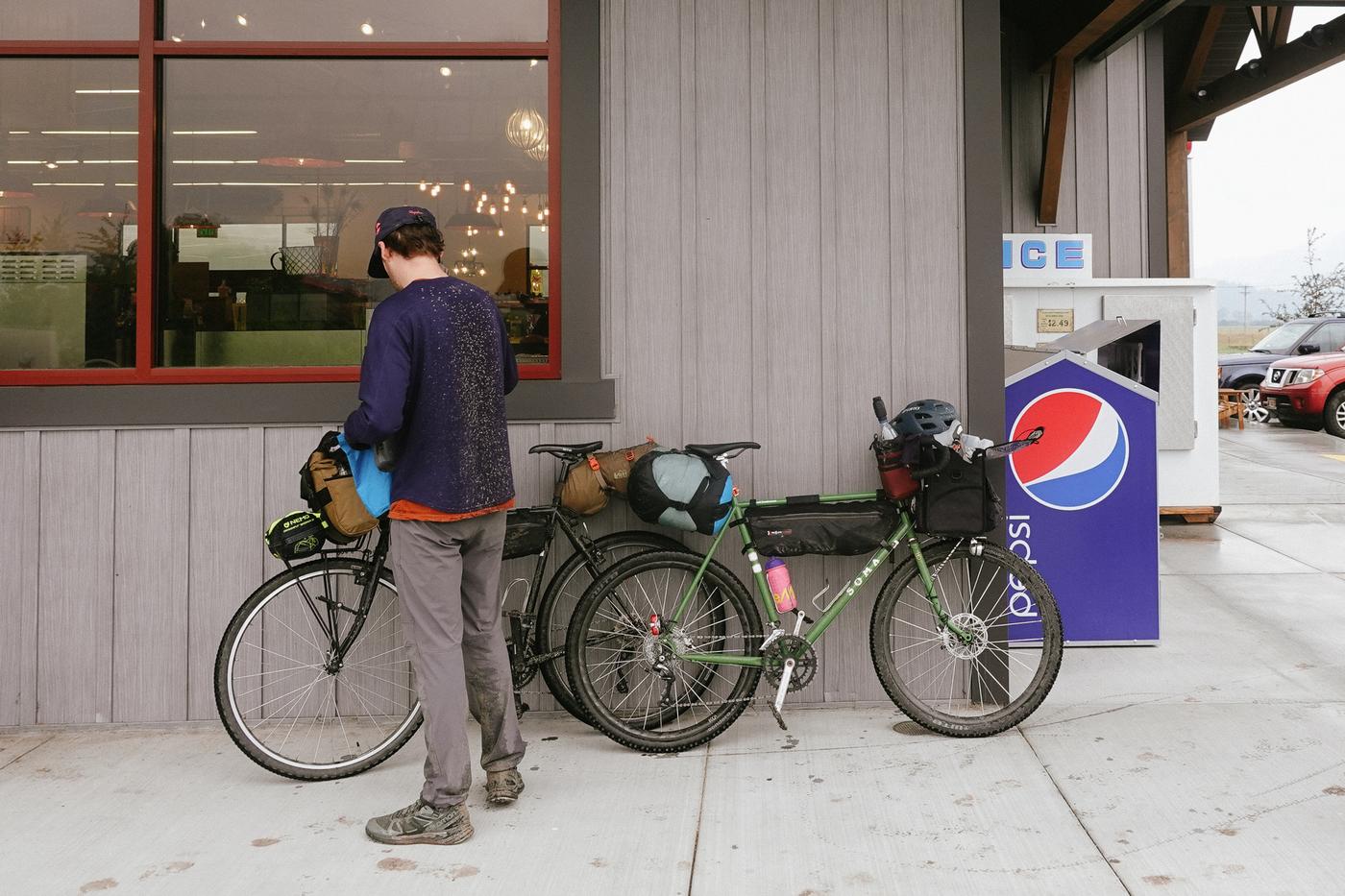 We didn’t have any luck finding a good bivy spot on our second night, so we camped at the Headwater Lodge and ran into a few cyclists who were riding across the country. Will headed to our campsite to crash for the night, and I stayed up with our new friends, happy to chitchat with fellow bike tourists. They let me sleep on their floor.

Our final day was a road ride down highway 191. It’s a beautiful road that travels along Jackson Lake and offers staggering views of the Teton Range the entire time. You have to deal with tourists in rented RVs, but even in the rain it was worth it. I turned on my soundtrack for the trip during the road ride and we cruised south. Once we made it out of the national park we bailed off route and headed to Jackson. We met up with Will’s friend, Jesse, who was a gracious host and lent us some pajamas while we did laundry. Thanks, Jesse. 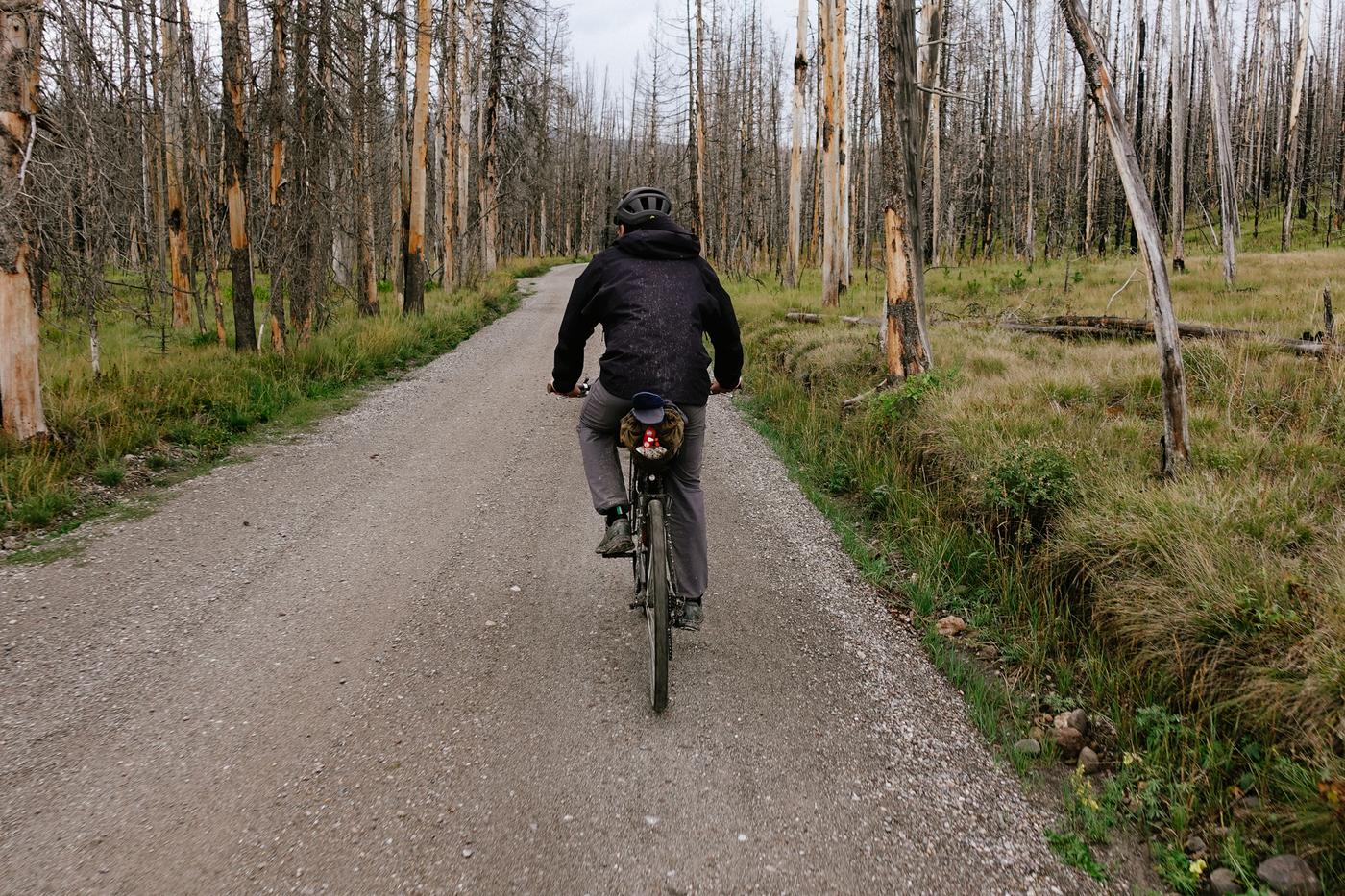 The Around The Rock Route is a great option if you’re looking for a relaxed three-day bike camping trip with some great gravel and plenty of amenities (a somewhat rare combination). There are restaurants as you traverse the west side of the range, a few hot springs on the northern section, and all of the tourist memorabilia you could ever want as you head back down the east side of the mountains. I’d give the route a solid Yelp review even with the rain.