This route checked all of my boxes. Almost completely gravel but lacking the demoralizing climbs that the Southeastern Appalachians are often known to include. Plus, there are amazing swimming holes, cool caves, and great overlooks.

The crew met up at Wildlove Bakehouse in Knoxville, TN where I immediately spent $20 on baked goods and coffee. I demolished my snacks while we waited for our late sleeper to arrive. He’s usually on time, so it’s cool. We headed to Pickett State Park around 10am. While unloading bikes at the park headquarters, I burned some incense to really make sure the trip would have maximum vibes. You’re probably thinking, “What incense are we talking here?” Great question. Black Copal from House of Land. Within 10 minutes of leaving the parking lot we turned onto gravel.

That brings us to the road. I’ve never ridden anything like this. For more-or-less the entire route the “gravel” road was a hard-packed surface that rolled like asphalt, but without the cars. Even after a night of rain the road conditions were absolutely perfect. If you’re looking for a great intro to gravel riding in the southeast, this could be your ticket. We rolled along for the morning until we saw a well traveled side road that headed to a prominent cliff. Heck yes we were stopping. Once we ditched our bikes and headed down the trail we found a massive overhanging cliff with a swimming hole underneath. Even in January it was tempting to take a swim. We opted for beer.

After a flat, some cool wall ride features, and miles of perfect gravel we started to look for a spot to camp. I still can’t believe what we found. A massive swimming hole with two rope swings, a sandy beach, and some mediocre tent spots. But we’re talking peak aesthetics here, so we’ll compromise on the sleeping situation. When I checked the weather the day before, I was hyped to see basically zero percent chance of rain. False. Super false. It rained for the entire second day. Also the forecast called for a low of 48. False again. More like the low 30s and snow. 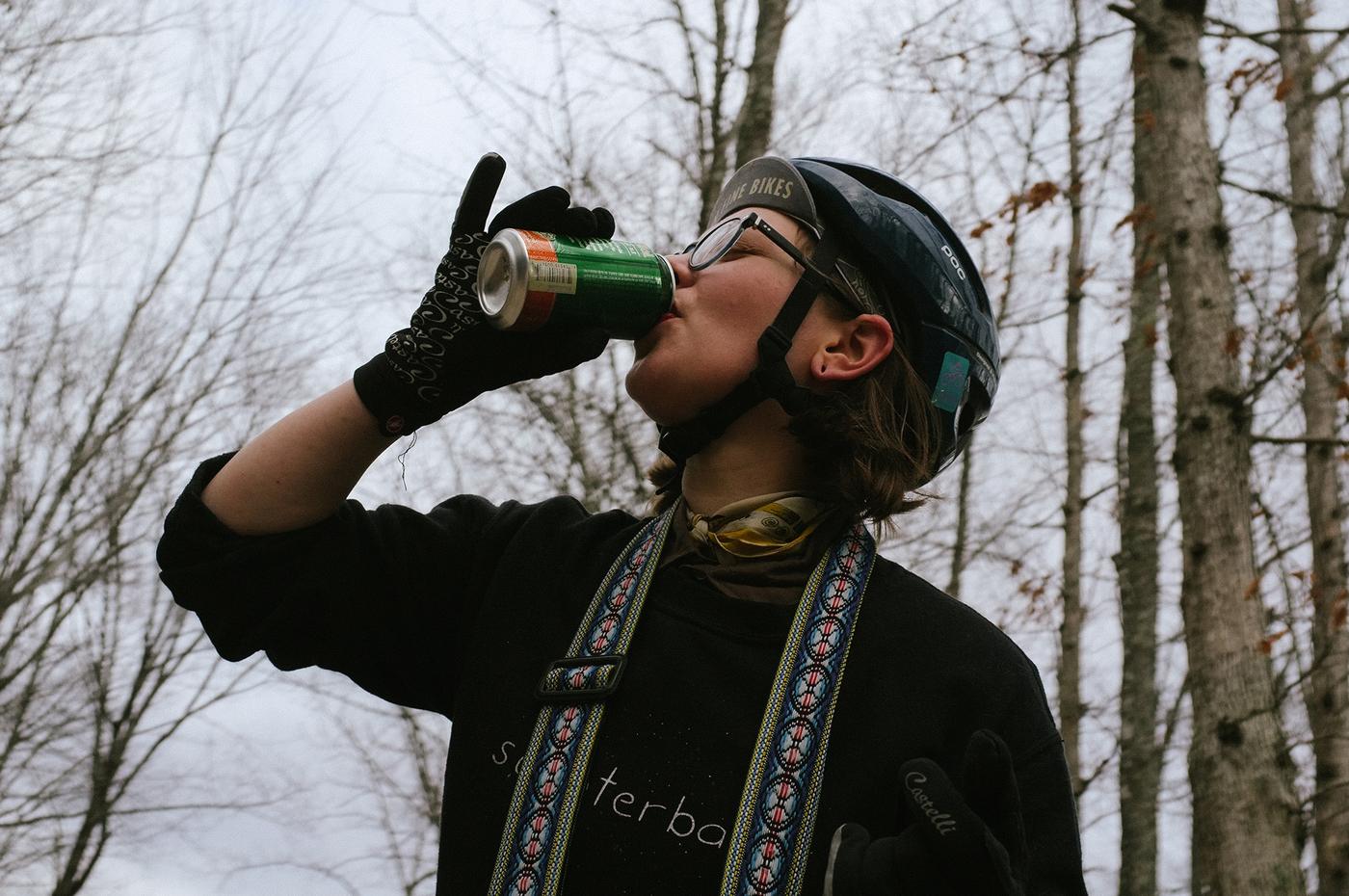 But fear not: this two-day ride was gravel casual. We only have to ride twenty-five more miles. No big deal. Even with the rain, sleet, and snow, we had a blast on the second day. The views were abundant, and I brought a lot of cookies.

We were wet and dirty when we arrived back at the car. We drove to the nearest gas station that sold alcohol on Sundays and drank beer in the parking lot. I’m so thankful that I can rally a group of folks together to go have fun on bikes in the winter. A huge thank you goes out to Jon Livengood who established this route (embedded below), and to Austin, Josiah, Emmy, and Ryan for the ride.