The route is just under 1,000km tracing the Westfjords of Iceland, the most remote area of a sparsely inhabited country in the Arctic. The challenge is to finish the mixed gravel and pavement route in 4 stages. The weather can be harsh. The wind can be fierce. But that’s what makes this place. It’s stunning and it’s brutal. Treeless mountains rise out of the sea. There’s very little development. Beyond a flawless road system, humans have left little impression. It’s a wild place and we get to ride our bikes through it. There are 57 starters, 20 of them women. For many of them, the first 158-mile stage will be their longest ride ever. And then we’ll wake up and do it again and again and again.

Is it possible? Absolutely. Is it hard? Yes, for everyone.

What’s the point? Everything you get to see, feel and experience.

Instead of looking out the window or watching a movie, we get to live it.

This requires discomfort, effort and perseverance.

Does it matter? Yes and no. Do it because you want to. Ride at any pace. If you’re curious, go for it. The willingness is success. It doesn’t matter if your plans change or you don’t finish. The point is that you started and you gave yourself a chance. The Arna Westfjords Way Challenge race organizers, Lynnee, Tyler, and Dora, have made this as welcoming and friendly as possible. Each stage ends with a hot meal and the option of getting a bed for the night or camping out. There are two required cultural connection stops during each stage – a chance to soak in a hot spring, eat waffles, or visit a local farm or museum. The cultural connections are havens, something to look forward to, and a chance to take a physical and mental break. The locals know what we’re doing. They’re warm, encouraging, and helpful. It’s still really hard, but seeing a kind face and having a bowl of soup can make a world of difference. 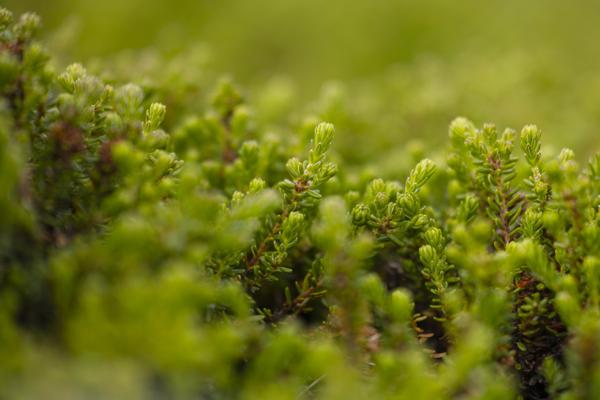 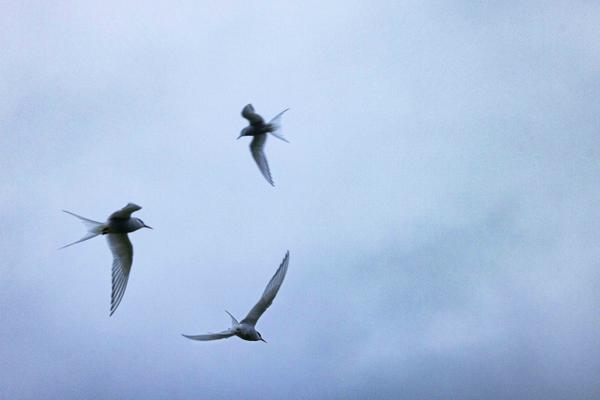 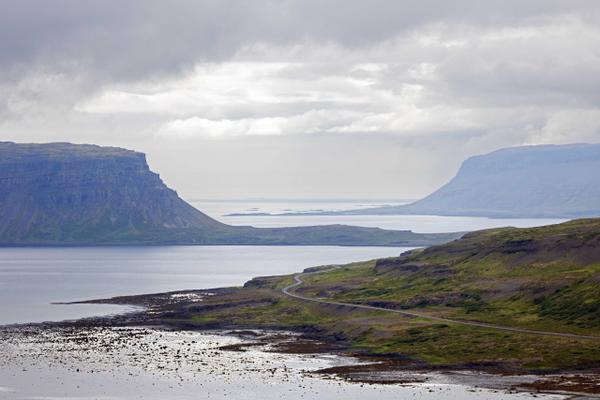 Waterfalls, moss, cliffs, and the sea. There is no other land like this. Sometimes the road ahead seems endless.

Sheep, terns, Icelandic horses. The largest predator is the tiny Arctic Fox. There are no mosquitos.

There’s a lot to love here, but there’s no denying that it’s harsh. You have to see it for yourself. You have to ride through it. 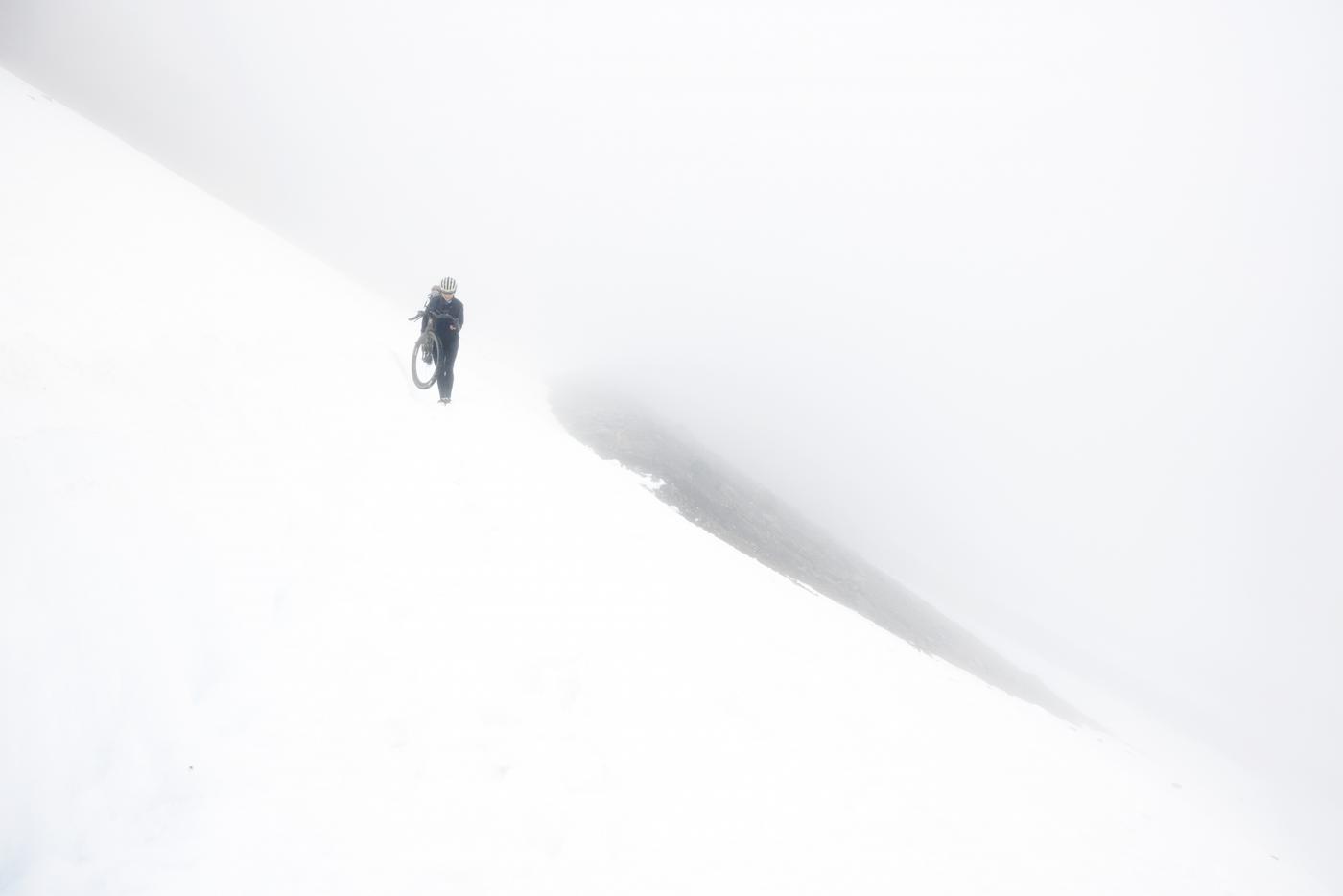 We begin at midnight. Iceland is so far north that in the summer, the sun never sets. It’s nearly freezing, but we’re climbing right away and have a good chance to warm up. I’m excited. I slept from 5-10pm, ate a plate of pasta, drank a cup of coffee and I’m ready to go.

“Are you in a hurry?” It’s Arnþór. He’s a hammer with the face of carved rock. Stern, serious and a hell of a rider.

“Are you in a hurry? Are you trying to be the first to Vegamót?” 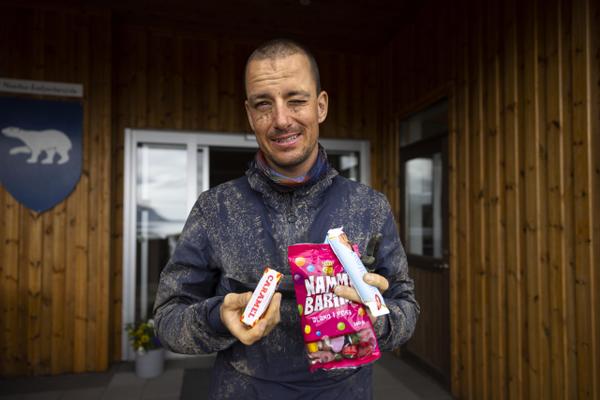 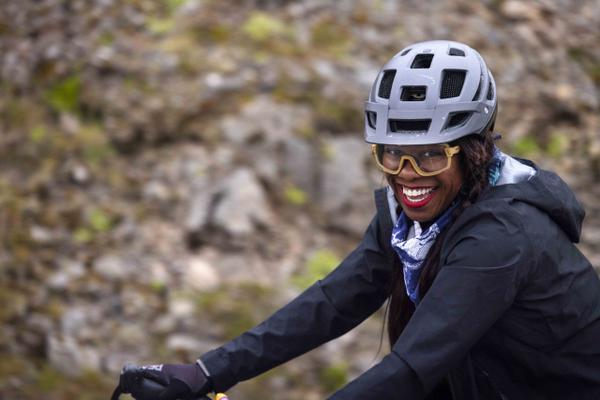 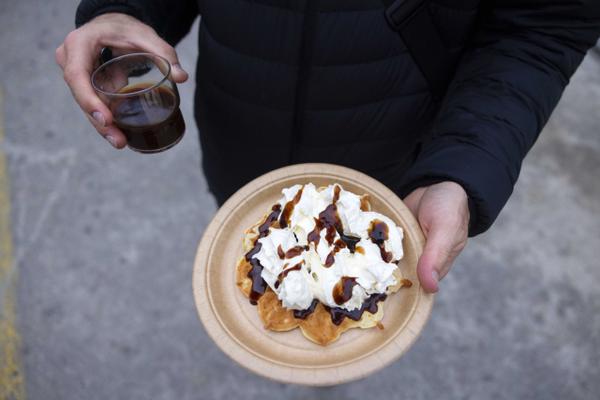 Vegamót is the waffle shop, our first cultural connection and a chance to take a break. “I’m just trying to enjoy my ride. How about you?”

And we take off side by side, riding through fog past hillsides of lupines.

Arnþór confesses that he loves to climb. He’s on a local road racing team. He’s not as fast as the other guys, but he always takes a few pulls early on. He’s thinking of switching completely to gravel. He always does better at longer races. He used to work in this area.

“At the salmon hatchery at the base of the next pass. It’s the biggest building in the Westfjords.”

He grew up in Reykjavik. When he was young, people used to leave the keys in their cars in case somebody had an emergency and needed to borrow it. You’d go outside and find your car missing, but it would always return. He says things have changed. That there’s an Eastern European mafia presence in Reykjavik. That you have to live in the countryside to experience the old freedom. We crest the first pass. The fog is so thick, it’s hard to see the sides of the road. Arnþór starts bombing down. I don’t even try to hold his wheel. Visibility is low and there are large potholes dotting the road.

We pass the hatchery and start climbing straight up the other side. I catch back up. A couple rollers at the top are the last leg burners and we fly straight down to the road junction to
Bíldudalur. We stop to take time stamped selfies to officially clock out from the race, ride a mile detour to the restaurant/market, prop our bikes against the wall and go inside to warm up.

The owner has a round jolly face. He’s blasting disco and cranking out waffles as fast as he can. We top them with whipped cream and rhubarb jam.

Helmets stay on. We won’t stop for long. 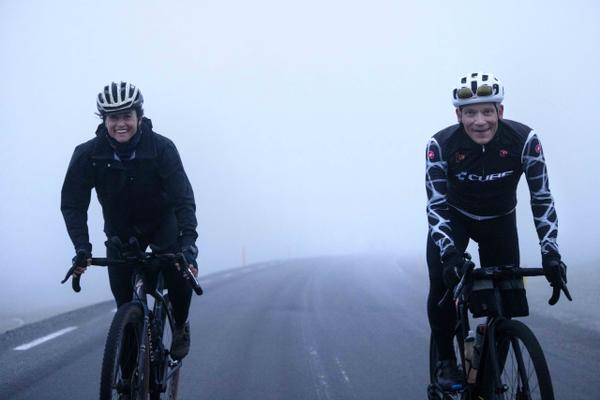 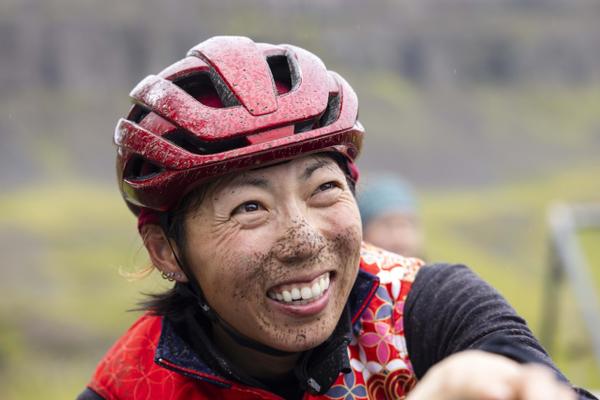 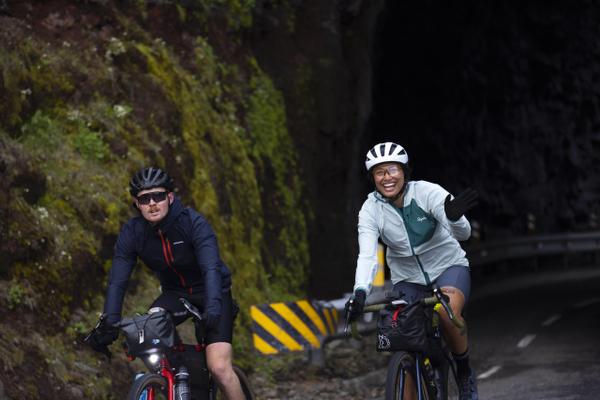 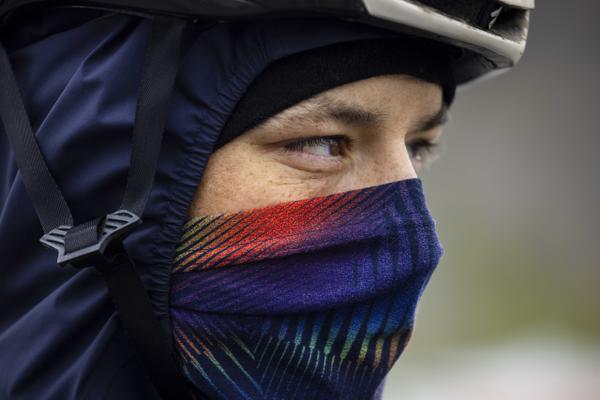 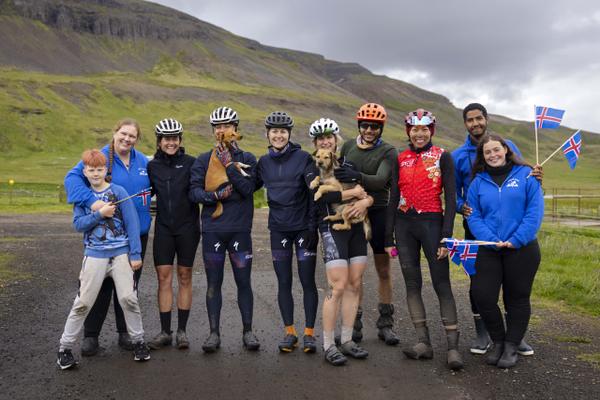 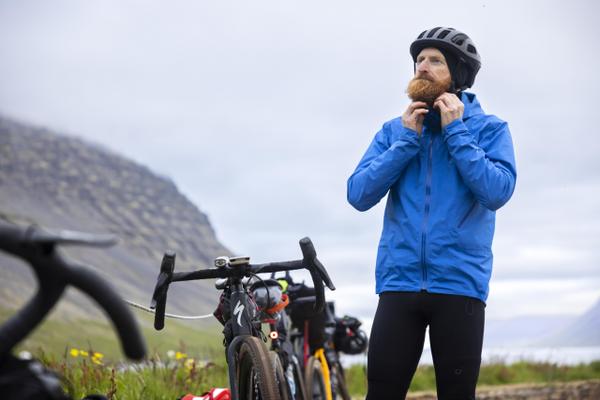 One of the things I love about these events is how it brings people from different backgrounds together. We all have different skills and experiences, but somehow we end up at a similar pace and it’s nice to have friends out there.

I roll out with my crew – Maghalie the World Cup Cyclocross racer and her husband David; Hannah the bike tourist that rides in a crop top and shorts – even when it’s freezing; and Chas the bike messenger turned ultra rider.

Different from many endurance events, the Westfjords Way Challenge allows drafting as the wind can be so harsh. It’s a huge benefit to work together and it encourages camaraderie.

We clock back in and start pedaling along a fjord. We pass the Foss Waterfall, then the iconic A-Frame sheep shack, then a rectangular cement public hot spring. Then, we start climbing again, this time on gravel. It’s two more passes in the freezing fog to Dynjandi, the largest waterfall in the area. The low visibility is disorienting. Sometimes you don’t know if you’re going up or down. I pull over to layer up. If I lose my heat, I’ll lose my energy. It’s worth it. Arcing around a final bend, I see Dynjandi– a fan of a waterfall 100 meters long and 60 meters wide. I clock out at the road junction and ride towards the waterfall. There’s a guy from Fisherman with a truck and hot pans of fish cakes. It’s four in the morning. A few of the cyclists make trips to the heated bathrooms to warm up. There are signs inside saying camping isn’t allowed– except for cyclists and hikers because it’s too far to the next spot. Riders come and go. I wait for Maghalie and Dave and then find out they skipped the stop. No problem. I pop in my earbuds, turn up the pop music and hit the pedals.

And now I’m having fun! 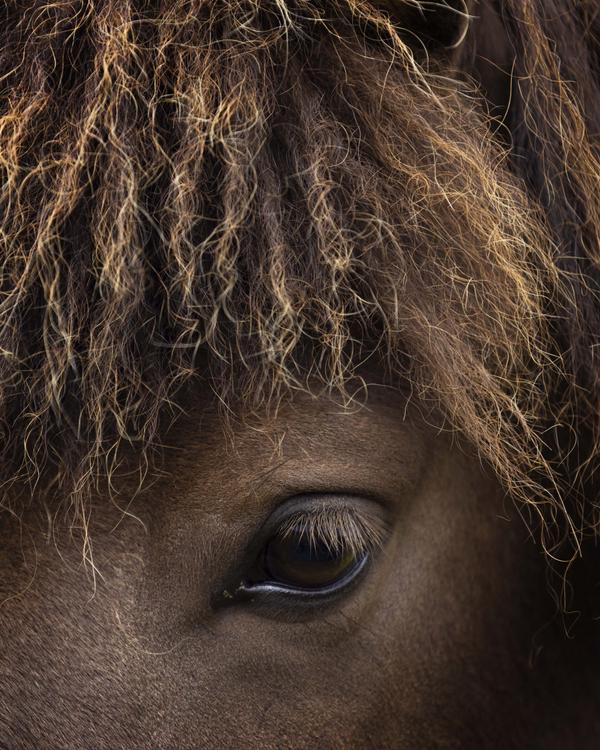 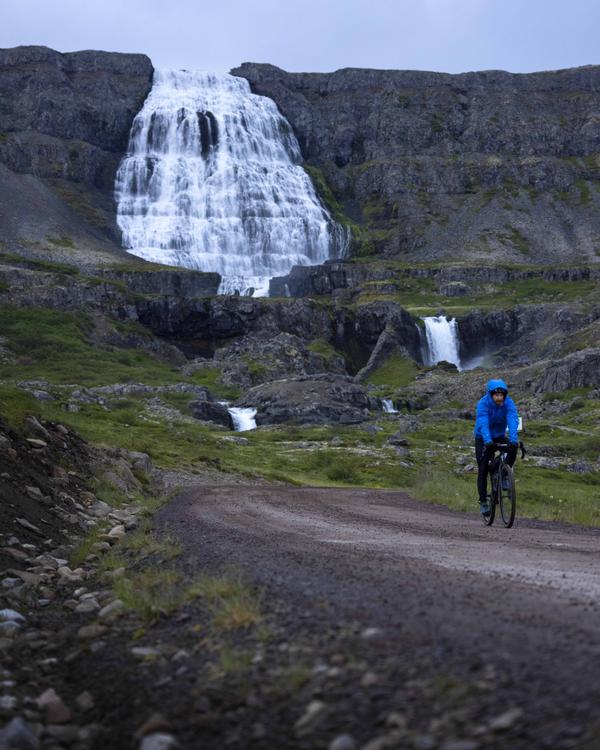 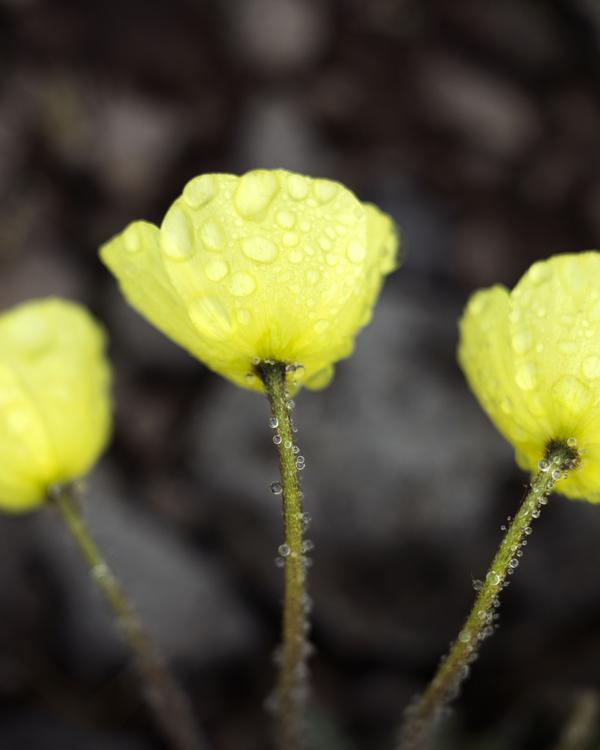 The next stretch is the best of the route. It traces a peninsula. The story is that the road dead-ended on two sides and a farmer carved out the connector with his tractor. It’s rougher and wilder than the rest, but totally worth it.

I don’t hesitate through the stream crossings. I’m bouncing on the rocks, feeling good. I’m passing riders. I catch up to Maghalie and Dave.

“Not good.” Dave has his Buff pulled up to his eyes.

“Dave’s sick. We’re just trying to make it to the next stop.” 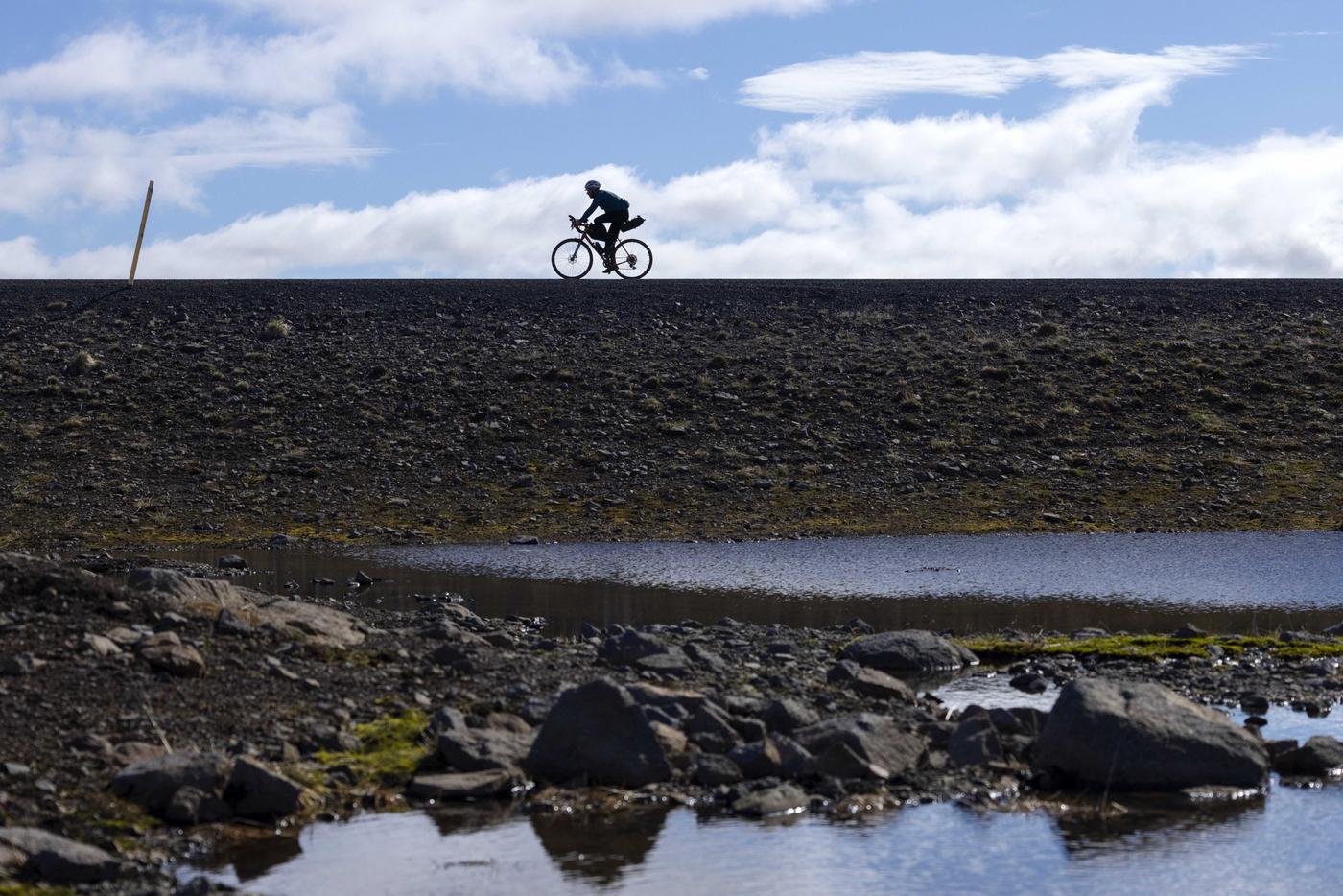 The next stop is a cafe in Þingeyri, a quaint fishing village. They open early for us. It’s just after 9 in the morning. We’ve ridden 900km of the route and have 60km to go– just two more mountain passes and we’ll be there. 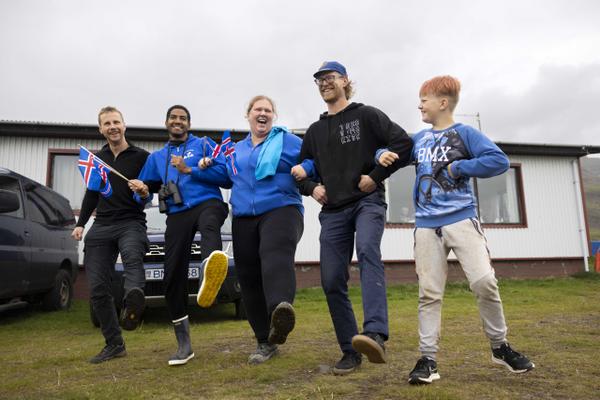 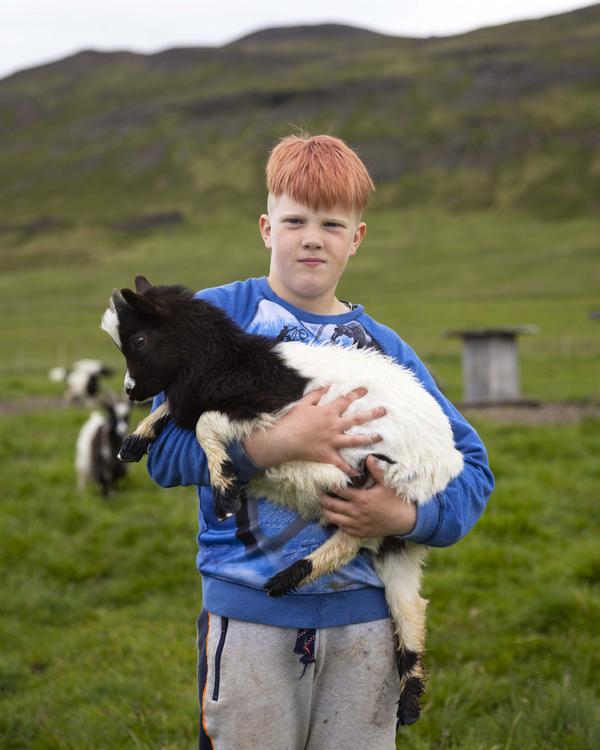 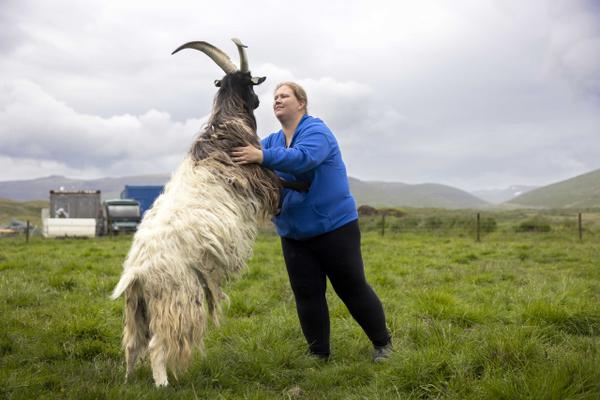 Everybody orders everything– soup, waffles, cake, croissants, and coffee. If they’re making it, we’re eating it. It’s delicious. Dave tells a story of his calf cramping so hard that he yelled and then a bird pooped on him the next moment. He said he saw whales, unicorns, and his grandfather cheering for him. Maghalie saw the whales, but not the grandfather. You can’t make this stuff up and somehow it’s really funny for all of us.

We roll out in our own time. It’s time to finish. 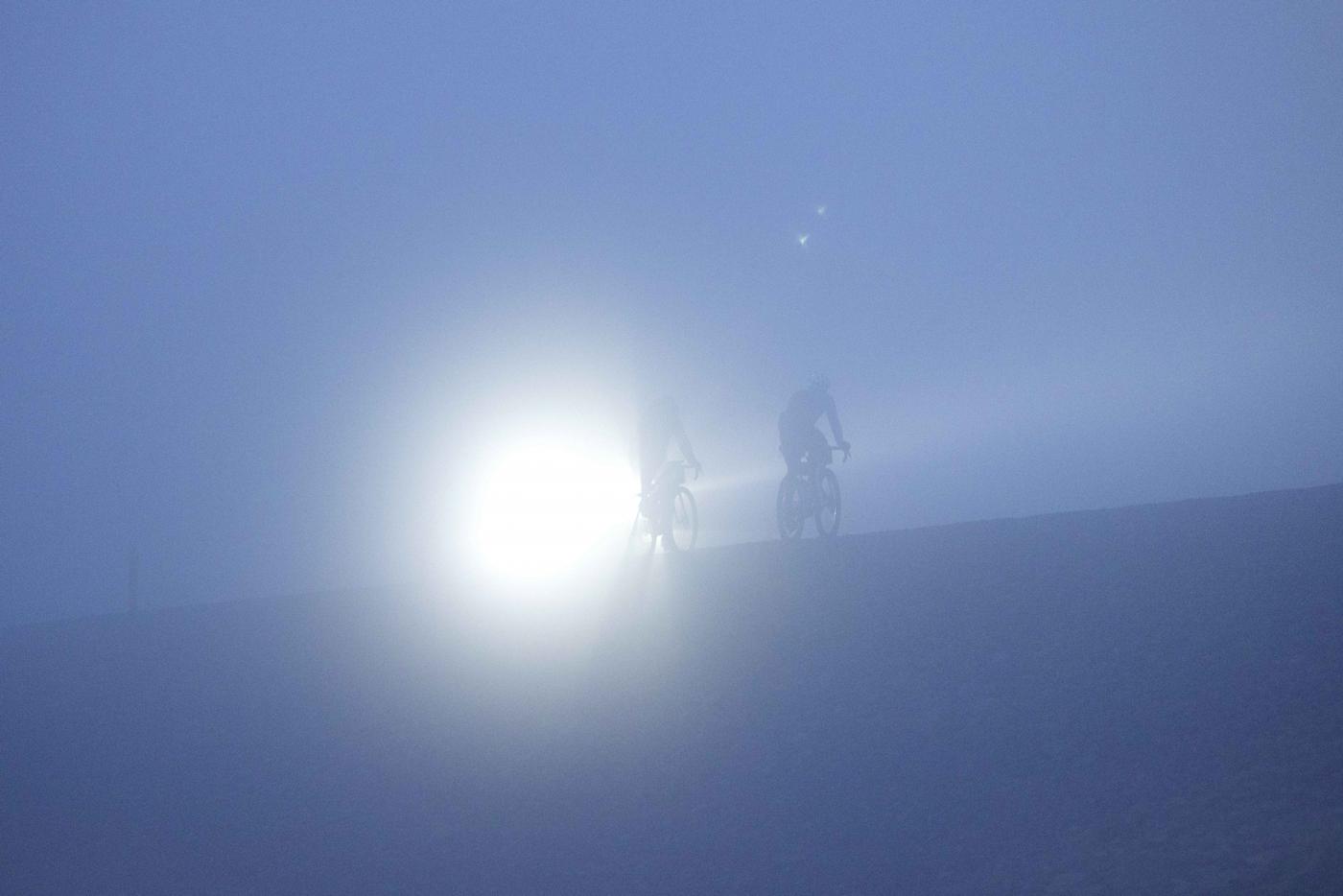 The wind is biting. The first pass is paved. The second is an adventure. A rough, rocky road leads to a snowy traverse. It’s all over quickly. In the moment, you feel like you’re in the middle of nowhere, on a 4,000-meter mountain pass in Kyrgyzstan, but then you round a corner and you see the harbor and you realize you’re almost there.
I get there. There’s a white flag and a couple of ladies clapping and that’s it. It’s over.

We do these adventures for ourselves, to see what we’re made of. In these vulnerable moments, we form bonds that we’ll never forget. We laugh into the wind, we push the pedals when we’re feeling good and we hang on for dear life when we’re not. Forty-five of the 57 riders finished the entire route. Does it matter? For me, what’s most important is that 57 had the courage to start, to give themselves that chance. We all learned something and we’ll never forget it.