The Arizona National Scenic Trail is 800 miles of singletrack, stretching from the Mexican border to the Utah border and traversing most of the state’s major mountain ranges. With initial development in the 1990s, the hiking trail passes through several wilderness areas, requiring bike detours. The current bike route is 827 miles, including a 24-mile required bike portage through the Grand Canyon (wheels can’t touch the ground). Scott Morris began hosting a self-supported bikepacking race on the route about 15 years ago, starting with a 300-mile race to the Picket Post Trailhead and in future years, including a race on the full 750-mile route. Scott has spent countless hours building and maintaining the trail, advocating for bikes on the route, and encouraging people to ride it. He’s a wonderful role model for the sport.

Arizona local, John Schilling took over the race in 2019. He’s added 70+ miles of singletrack to the route, necessitating new records, and really wants riders to experience the full trail, without snow detours. With this in mind, he’s rescheduled the Grand Depart to the fall, so there’s less of a chance of snow in the north. John is not afraid of hike-a-bike and has a huge heart for the trail. He organizes group rides and helps beginners get out there. I first toured sections of the Arizona Trail in 2013 and came back in the fall of 2015 to ride the full route in anticipation of a time trial in October. It was the first time any of my big efforts were documented. REI wanted to make a video about me riding the Colorado Trail. There was already snow in the high country in Colorado. I convinced them to focus the video on the Arizona Trail. They asked if I’d go out and try to break the record. Why not?

It was the end of a never-ending season– 10 months of bikepacking in Europe, South Africa, and the Middle East followed by racing the Tour Divide in June, riding a second time trial on the full Tour Divide route in August, and riding to the start from Alaska twice. In short, I rode 8,600 miles in three months. I was mentally, physically, and emotionally exhausted. I cried many times while touring the Arizona Trail in 2015. I just didn’t feel confident. It’s exceptionally beautiful and diverse– pine forests to saguaro cactus, a trek through the Grand Canyon with your bike on your back. It’s also brutal, rugged, and remote. There is very little access to food, water, and resupply. It’s a hiking trail– very technical riding & plenty of walking. Everything is prickly. The trail gets overgrown. It’s hard and it’s painful, but it’s also romantic. The 2015 AZT tour gave me a heavy heart. I was amazed to find myself euphoric when I actually started the time trial in late October. For me, that’s the thing about bike racing and these big efforts– I’m in my element doing what I love most with so much unknown ahead of me. At the start, I’m excited for the miles to unfold, for the animals and the stories and the feelings to emerge. After dozens of races in the past 8 years, the 2015 AZT time trial was one of only two rides I’ve ever had to quit. I have asthma. I didn’t bring an inhaler and I had terrible breathing problems. I was devastated. That failure pushed me to race the Trans Am in 2016. I haven’t had an opportunity to go back for the full AZT since. I never really thought I’d want to. I’m ready for it. My real love for the Arizona Trail started in 2018. Rue and I took a $5 Flixbus from Tucson to Flagstaff with the intention of walking home. We didn’t bring a tent or a stove and it didn’t rain for an entire month. We shared a cheap quilt and swapped audiobooks and lived off peanut butter and chips. I duct-taped Rue’s sleeping pad and blisters. Her step dad sent us new shoes to the post office. We carried a whole pie up Mica Mountain for Thanksgiving and decided to keep walking another 100+ miles to the Mexican border. We got snowed on at 6,000’ on our final night just south of Parker Canyon Lake. We burrowed deep into our quilt and covered our heads until daybreak. Instead of climbing up to 9,000’, we turned around and ran back to the road. We hitched a ride with a hunter to Sonoita and friends picked us up from there. We’ve still never seen the final 12 miles of the trail over Miller Peak. We’ll definitely go back for it someday. While hiking, somewhere along the Gila River stretch south of Picket Post Trailhead near Superior, AZ, I started dreaming of getting back on my bike. I could imagine the feeling and the turns and the headspace. It inspired me to get a mountain bike– my first full suspension in three years. I asked Specialized to borrow a Stumpjumper. With 150mm of travel and 29×2.6” tires, the bike was basically a rolling couch. It was heavy as hell (35 lbs naked) and I loved it. Over Christmas, I toured almost all of the Arizona Trail 300 (Parker Canyon Lake to Picket Post) for Rapha’s Festive 500. My only regret is spending hours away from Rue during the holidays. She was super supportive and I had fun, but I’ll never do it again. This year, we rode the Festive 500 together.

In the spring of 2018, I wanted to go back for a time trial of the full route. A ride in mid March was my only option– in between guiding for The Cyclist’s Menu in southern AZ and organizing Anchorage GRIT, my girls riding mentorship program, in Alaska. There was too much snow in the north to get through. What about riding a time trial on the Arizona Trail 300 to Picket Post? The first 300 miles are technical and rugged. Kait Boyle has the women’s record at 50 hours, 57 minutes and she slept for 20 minutes for a ride that took over two days. She is an extremely talented mountain biker & racer– winning the 24-hour world championship and often beating all of the men. Could I even come close? I sure didn’t think so, but I thought I might as well try– better than nothing. With platform pedals, running shoes, and a backpack full of banana bread, I was 53 minutes slower than Kait’s time. Over 52 hours, I closed my eyes for seven minutes. It got pretty weird out there. In the night, rabbits darted across the trail, and birds with red eyes landed in my path, moving only the moment before my wheel would crush them. I saw a Gila Monster just south of Oracle. My headlight illuminated colorful wildflowers the entire way. I loved it and it hurt a lot. When I got to the finish at Picket Post, I laid down on the ground. A hiker repeatedly asked Rue if I needed to go to the hospital. She told him I just finished a two-day ride with no sleep.

I wanted to go back in the spring of 2020. I got a new bike specifically for it. I wanted a cross-country full-suspension bike with 120mm of travel that could fully lockout and clearance for 2.6” tires. The timing was perfect– it was the pre-release of the Specialized Epic Evo. I got a demo bike and started dreaming. In the early months of the pandemic, everyone discouraged spending a single night outside. I shelved my time trial. I’m back for it now. On the night before the ride, I can’t imagine how I’ll actually feel out there. My bike is packed. The track is loaded. I’ve printed out all of One of Seven project resupply guides. I have no idea what’s going to happen, but I’m ready for it. My goal is to ride as fast as I can and enjoy it as much as I can. I want to break the record, but with all that can happen, that’s very tenuous. Ultimately, I hope to have a clean ride, see the beauty of the route and push my limits. It feels like unfinished business and I’m grateful for the time I get to spend out there. 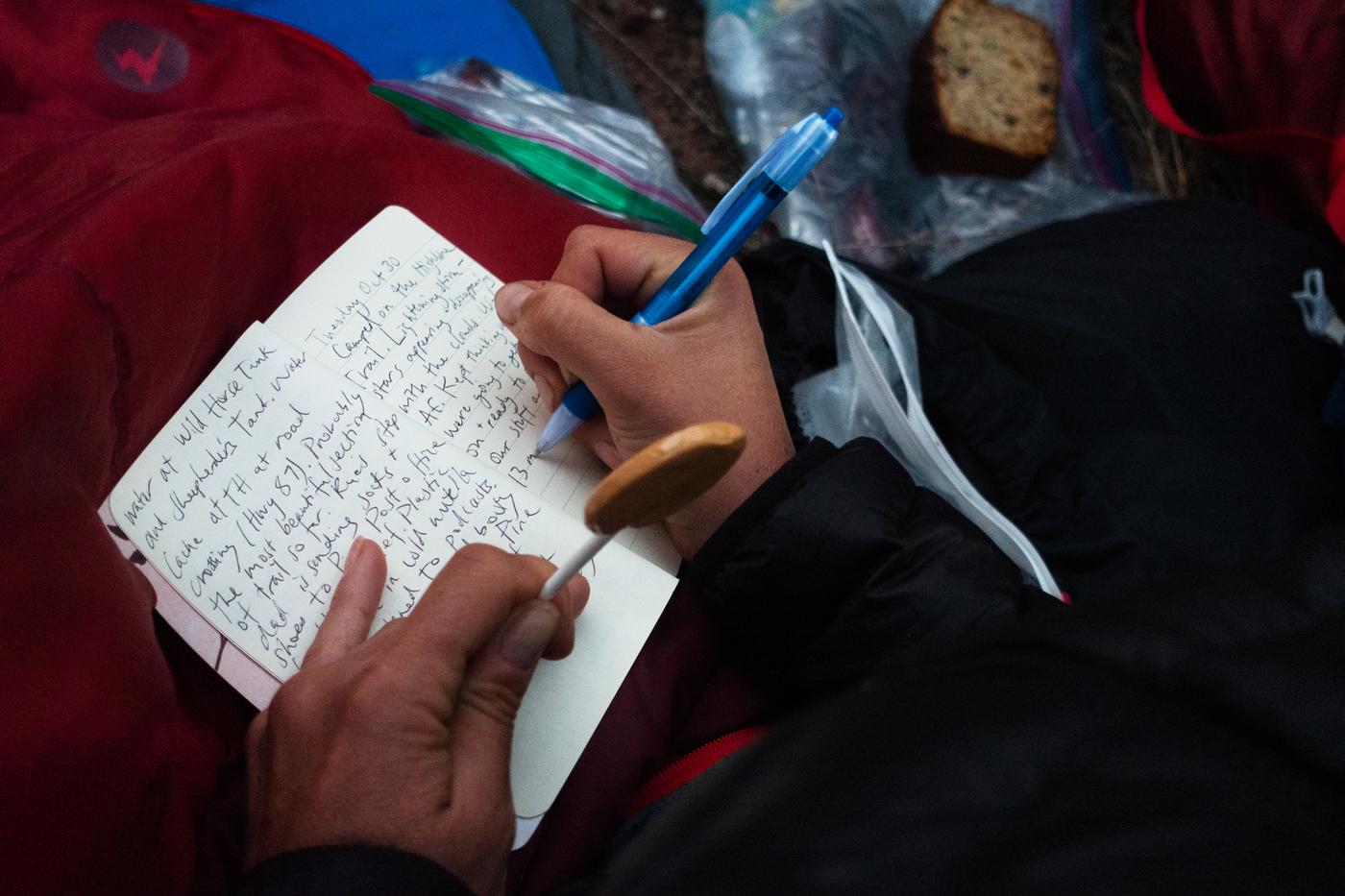 Records are meant to be broken. I always make a lot of mistakes, but the main point is not dwelling on them. I just have to keep moving forward, having fun, and doing my best. 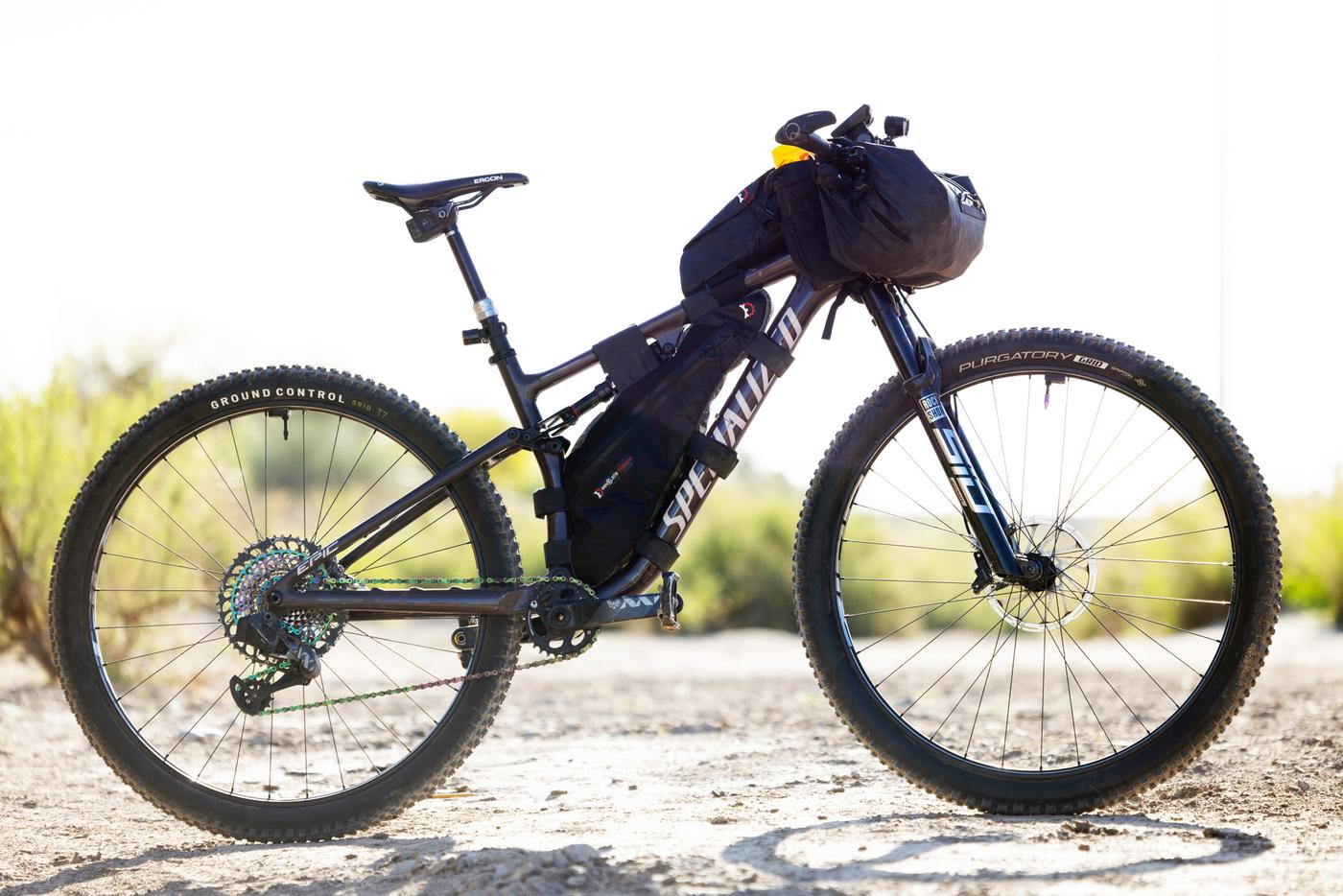 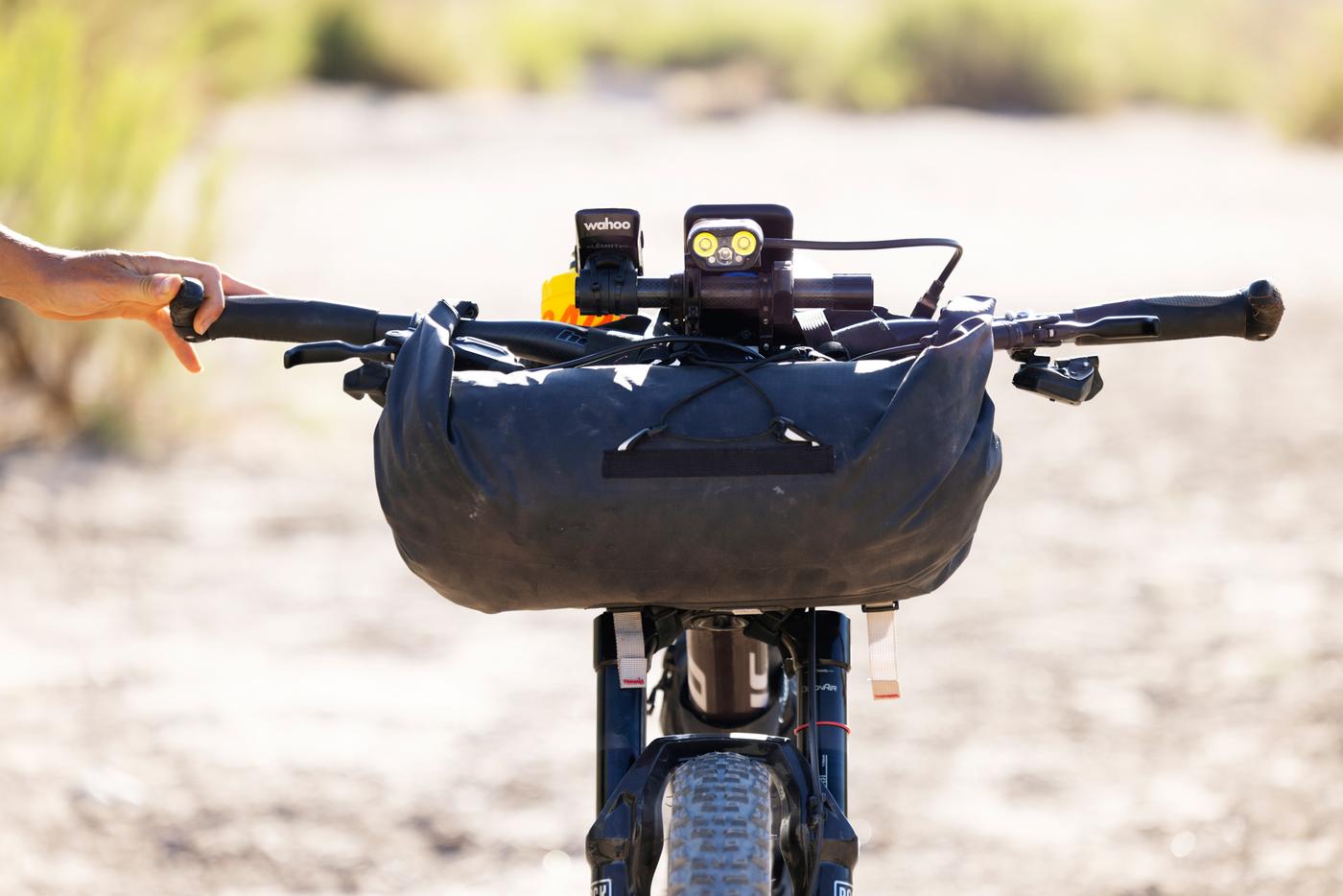 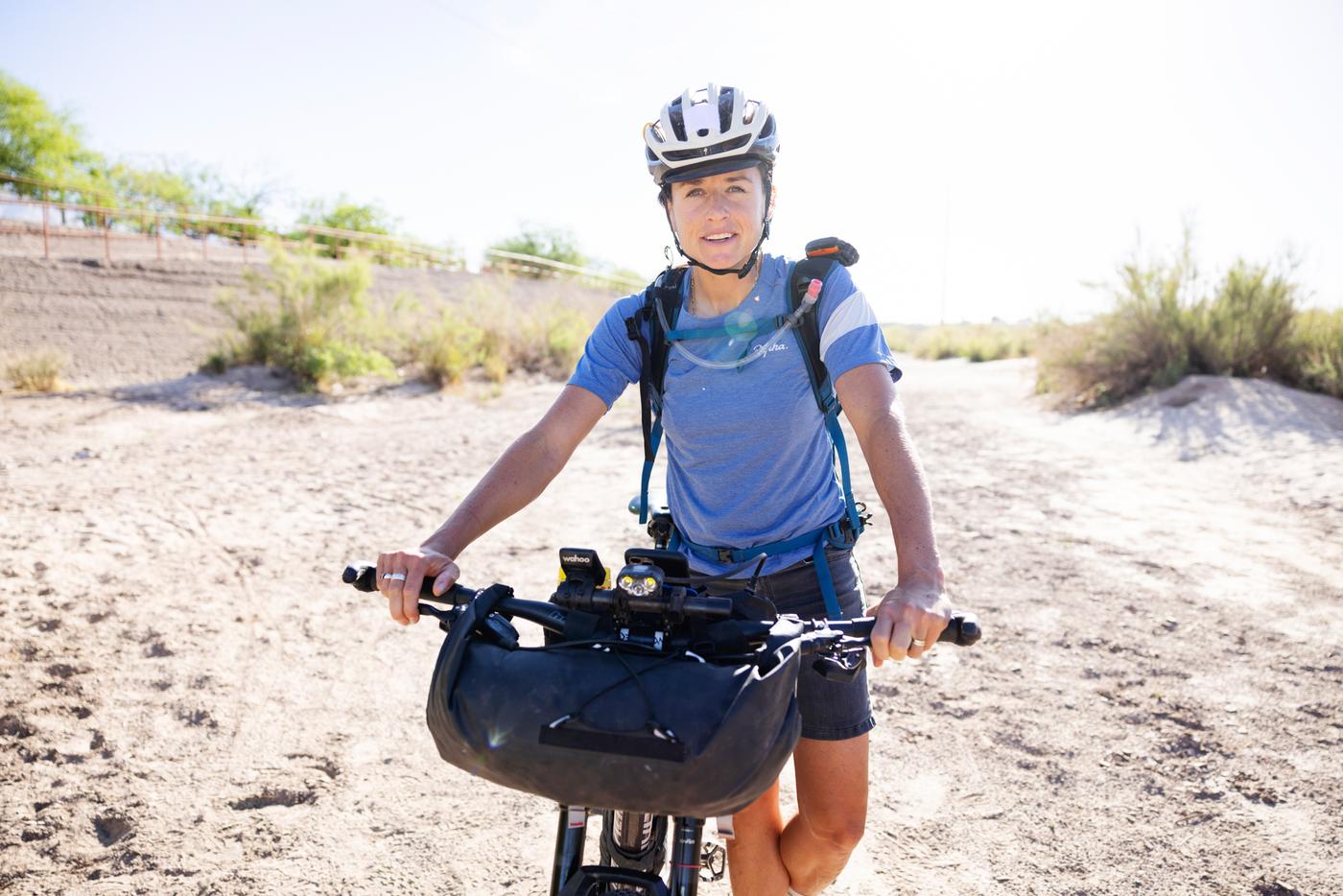 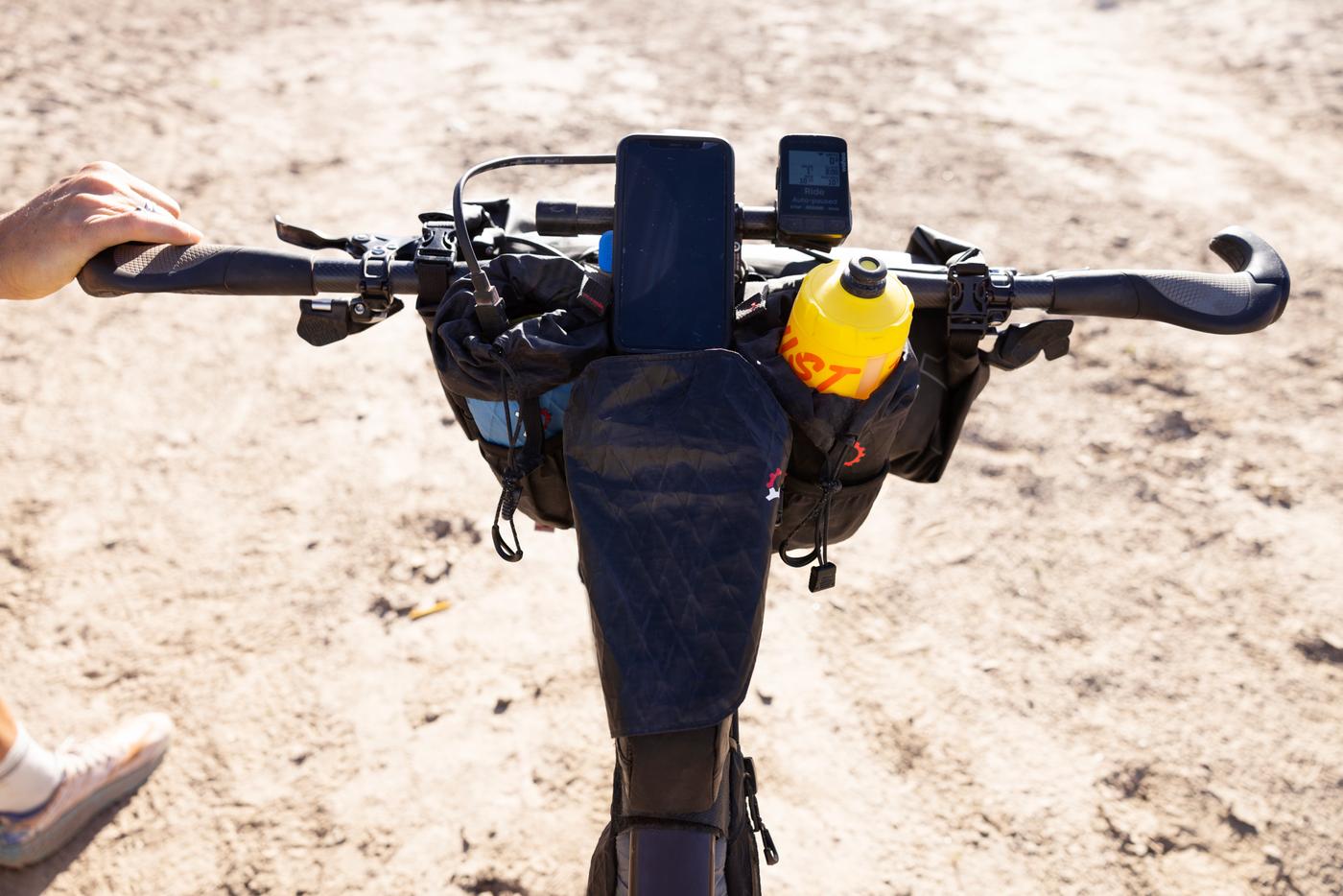 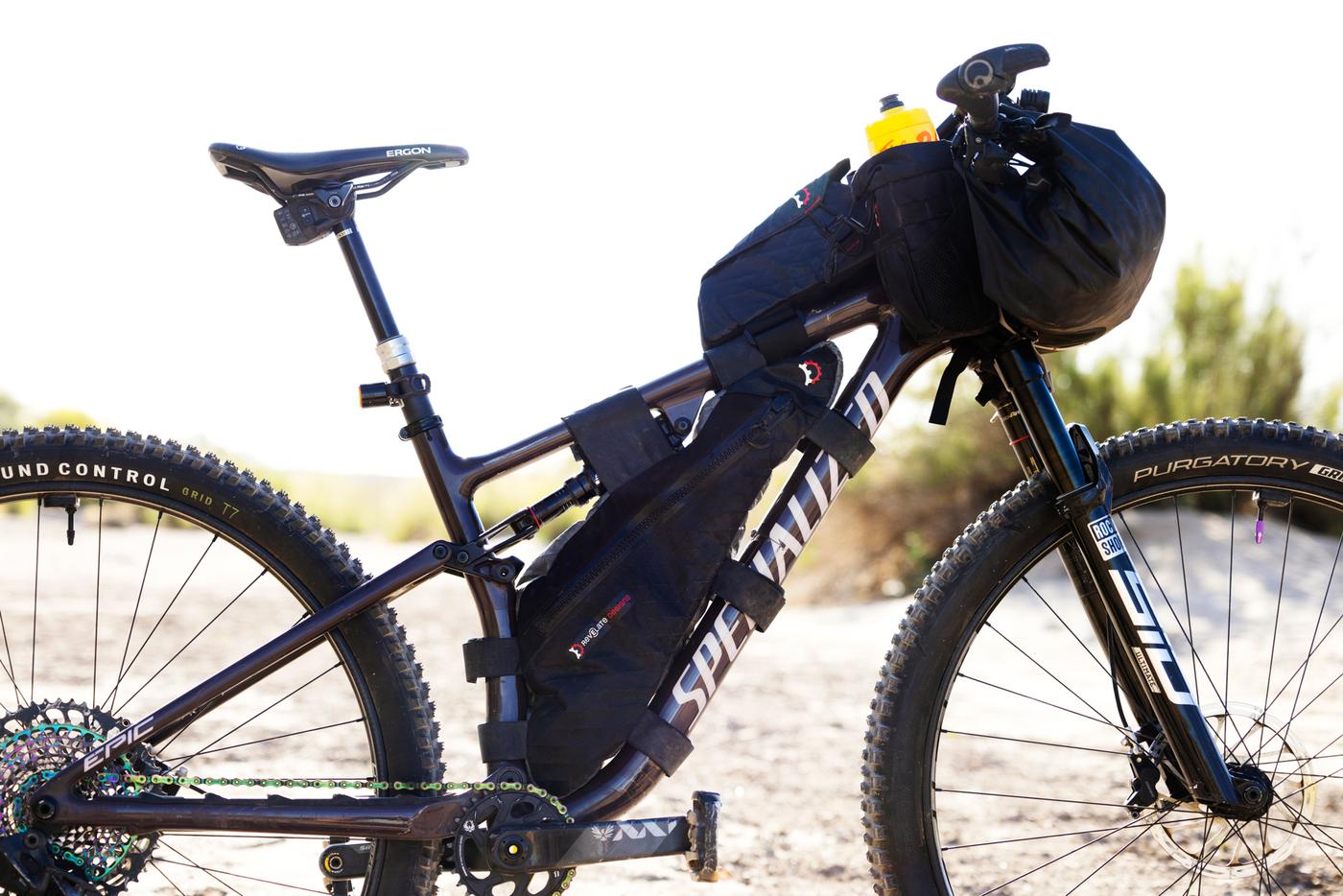 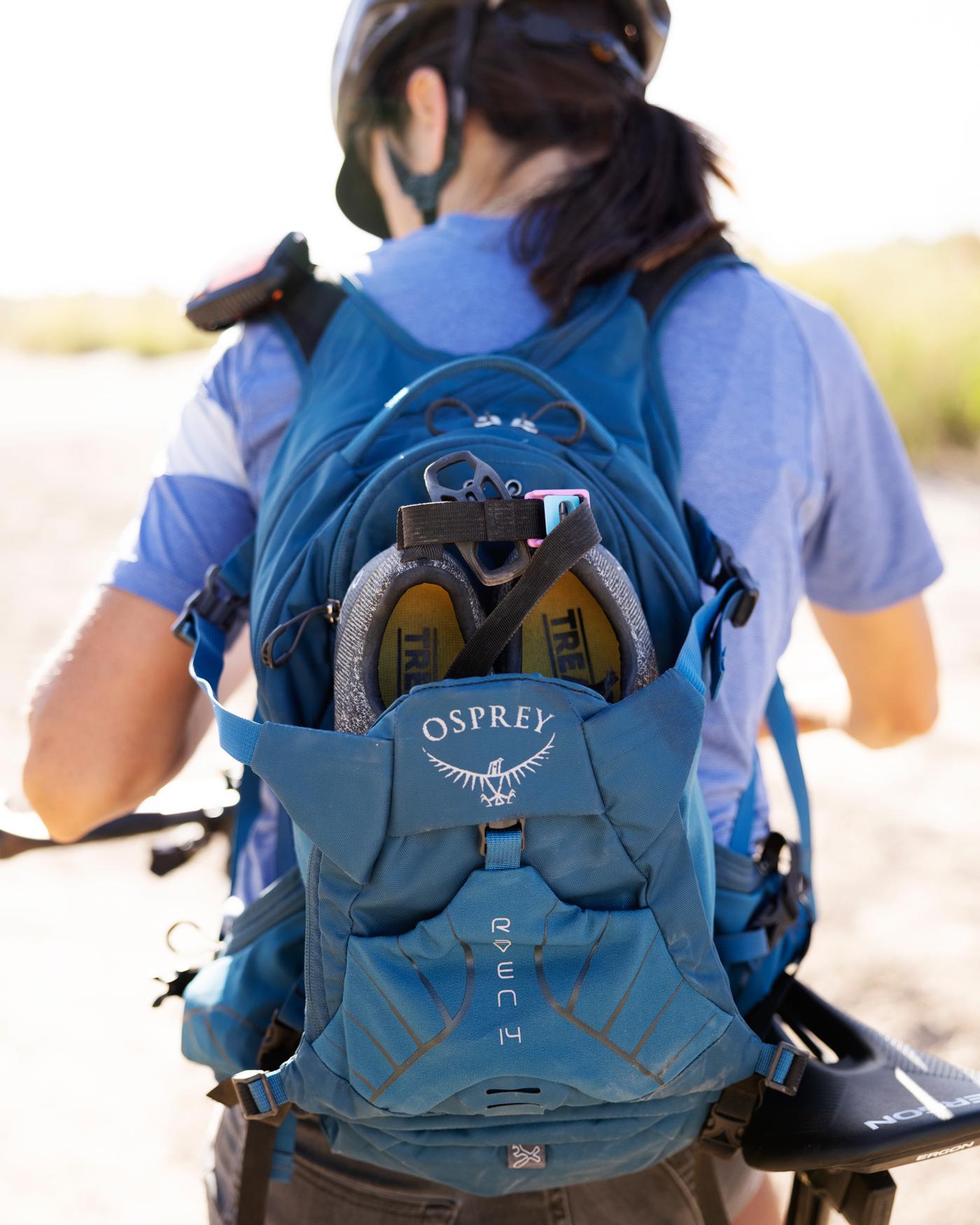