We continue our Lael Rides Alaska series with a beautiful story from a series of rides on some of Alaska’s islands. Check out more from this series in the ‘Related’ column below when you’re done reading this entry. Enjoy!

Staring at maps in 2017 on my mission to ride all of the major roads in Alaska, I was drawn in by a few remote destinations with more extensive road networks, specifically Nome, Kodiak Island, and Prince of Wales Island. In that summer, I made it to Nome and rode the three roads out of town— to the native village of Teller, to the river that leads to the historic gold mining town of Council, and to the active mining road that ends at the Kougarok River for a total of 230 miles.

Destinations don’t give roads like these justice. They don’t tell of the undulating hills free of trees because they’re so far north. They don’t tell of the sandy beaches leading out to the Bering Sea or the abandoned, rusted railroad engines or the rivers teeming with salmon or the grizzly bears running with grace. Or that you’ll meet a woman along the way that will teach you to harvest wild peas and tell you about her son’s growth problem and how he was bullied in school and how her father never claimed her and how she knows this land with her eyes and her hands and she wants to teach her sons and how the forest service didn’t hire her, but she used to teach about the plants at Pilgrim Hot Springs. A textbook could tell you statistics and facts. A guidebook could recommend where to go. Riding through it is living it in that one special time frame. A glimpse into a world that is ever-changing. I made it to Nome in 2017, rode the three roads in four days, made new friends, and was blown away. I went back with Rue this year for my birthday on an impulsive trip because the weather was good. I’m so glad we did. What about those other remote spots? What about Kodiak and Prince of Wales? I tried.
In August of 2017, I had a flight booked to Ketchikan, Alaska— it’s called the milk run because of all of the stops along the way. To get to Southeast Alaska, the Alaska Airlines flight stops and takes off from Juneau (the capital of Alaska), then Petersburg (the only city historically occupied by four different nations), then Wrangell (with a tiny airstrip that backs into the mountains and makes you hold your breath on take off and landing), then Ketchikan. The Ketchikan airport is on Gravina Island across from the town on Revillagigedo Island— you have to take an airport ferry to get across to the main ferry terminal that will take you on a three-hour boat ride to Prince of Wales. I wish I could snap my fingers and schedules for all of these things to align, but they don’t. In addition, this whole area is a rainforest. Ketchikan captures an annual average of 140-160 inches (3,550- 4,060mm) of rain– that’s more than 4 times the average rainfall in the UK (34” = 864mm), a place I consider rainy. Prince of Wales is a hard place to get to and conditions are hard once you get there, but if you catch it on a sunny day, it sparkles green. In August of 2017, I had to cancel my trip to Prince of Wales to be there for my family through a hard time. Incidentally, I missed three inches of rain. It wasn’t meant to be. Rue and I definitely wanted to make it to Prince of Wales this year. We scheduled two weeks of travel, hoping for a couple of sunny days. We invited my best friend Christina to come ride with us and Linda & Lottie, a couple of Alaskans in their 70s that had planned to travel with me in 2017. None of us had ever visited Prince of Wales and we were up for anything. We’d heard there were big trees and oyster farms and hundreds of black bears. I cut out the paper map from The Milepost, studied the roads, and calculated mileages on our flight to Ketchikan. Our mission was to pedal the 340 or so miles (550km) of main roads on the island– out to the Haida villages at Hydaburg and Kasaan, to the end of the road in Labouchere Bay, to the burger stand in Coffman Cove and the Dog Salmon Fishpass with pink salmon straining to get up the current and away from their black bear stalkers. Rue and I catch the afternoon ferry, spend the night at the ferry captain’s rental cabin in Hollis and pedal the next day through the rain. Christina picks us up on the road out of Hydaburg and the rest of the trip is dry– the first sunny days in a summer that has been the wettest on record in fifty years. “Let’s go all the way to the north first, the farthest away with the least facilities. Everything after that will be closer and easier and if the weather turns, we can find shelter.”
Linda and Lottie rent a truck, go on their own ride, and plan to meet us that evening at Memorial Beach to camp. We are overly ambitious, get distracted by a forest service road (I have a hard time skipping anything that looks like a road) and after having ridden 85 miles, we’re still dozens away from our destination with only an hour of daylight remaining. We have a tent and sleeping gear, but we don’t want to let our friends down. There’s no cell phone service and no way to communicate with them. 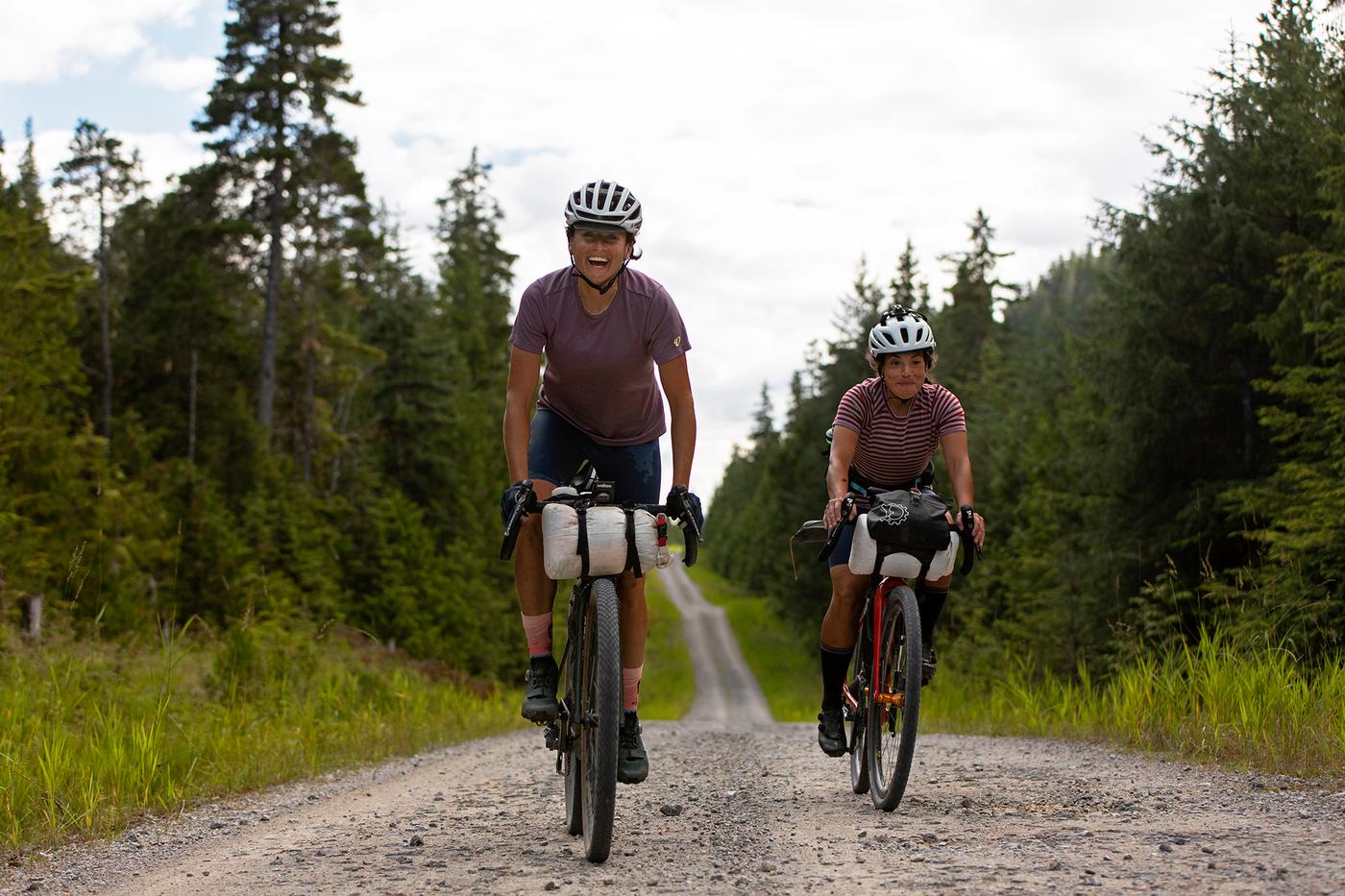 “If we see any cars, we’ll hitch to the beach and ride back tomorrow.” We haven’t seen any for hours.

It’s Rue yelling from behind. I pull over fast and stick out a thumb.
An old white truck pulls over ahead of us.

I pull out a tourist map that a lady on the ferry gave us and point at the picnic table graphic on the north coast of the map. We lift our bikes into the bed of the truck and crawl in next to them. It’s paved for the next ten miles or so to the turn to Whale Pass. Kenny and Tyler get out of the truck to look at the map again and we keep going north. The road gets as narrow as a bike path with surrounding trees forming a tunnel of green. It’s full of potholes and makes for a rough ride. We pull over for a pee break and the driver gets out this time too. She’s in a white hoodie and looks about sixteen and smiling. Carly and Tyler are sister and brother. Their father owns a logging operation and Kenny’s been working for him for years. They call it a man camp and Carly is the only woman around. He explains that this is basically Carly’s driver’s ed. They’ll take us wherever we’re going. We thank her for driving us and she says the people at the camp can be pretty annoying. She’s happy to get away. Kenny tells us he went to the north of the island when he was nineteen– that must’ve been twenty-five years ago. We had no idea it’d be this remote. We bump along, stop a couple more times to look at views across creeks, the trees are so thick that you can’t see much farther, and make it to a turn off for a picnic area.

This must be it. They get out of the front of the truck and we get out of the back and we all walk out on a dirt path through the rainforest to the beach. The sun is setting over the water. There’s a little shelter there and the chimney is smoking. We find Linda and Lottie in their sleeping bags on wooden ledges in a three sided structure. It’s Kenny’s birthday tomorrow. He asks if we’ll celebrate with him. They head back to the truck and their camp in Nauakati. We set up camp on the beach. Tomorrow we’ll ride ten miles to the west to the end of the road, turn around and head south and continue on our way to trace all of the lines on Prince of Wales. We ride 436 miles in five days, hitching a couple of times to avoid doubling back and fit it in before the rain returns. We catch an early ferry back to Ketchikan and an early flight back to Anchorage so we can change our focus to another area of Alaska. Prince of Wales is the third largest island in the US. Kodiak is the second. In 2017, Rue and I drove four hours from Anchorage to Homer with the intention of taking a 12-hour ferry to Kodiak. Upon arrival, huge waves washed over the road down the Homer Spit and the ferry was canceled until further notice with no option to reschedule. This summer, I kept my eye on the Kodiak weather and waited for a good window. 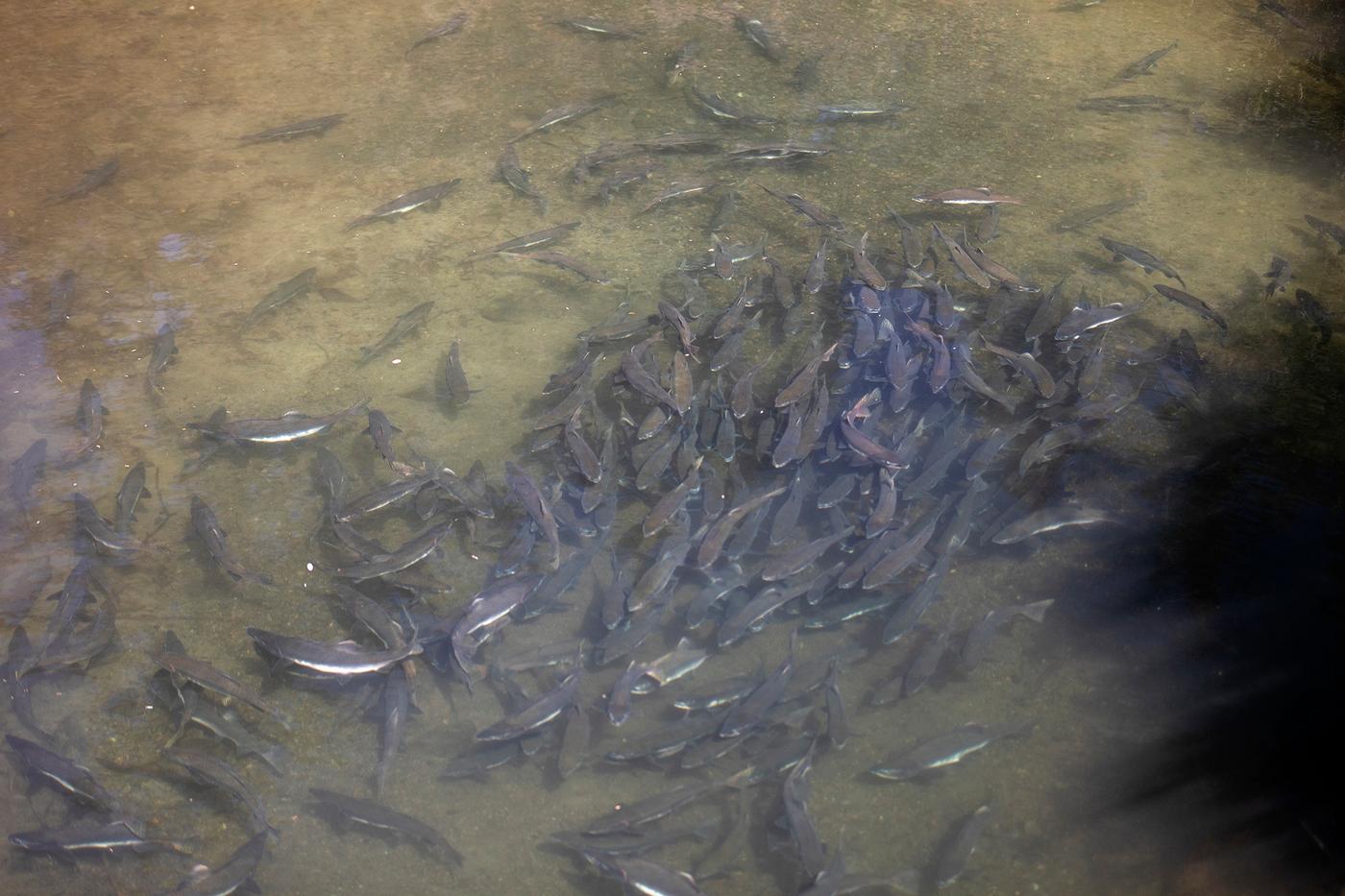 My mom comes along for the trip. She was born in Alaska, lived here her whole life, and has always wanted to visit Kodiak. There are only 92 miles of road on this huge island– you can barely carve the northeast corner. We go all the way south first to the surfing beach at Pasagshak and the cliffs at Fossil Beach. My mom borrows Rue’s e-bike to ride with me from Anton Larsen Bay and we see a Kodiak grizzly bear, notable for their immense size. We hike through the spruce at White Sands Beach, every turn shows a different view over the water. Ferns and flowers grow out of jagged rock, giving it the feel of traveling around Treasure Island. 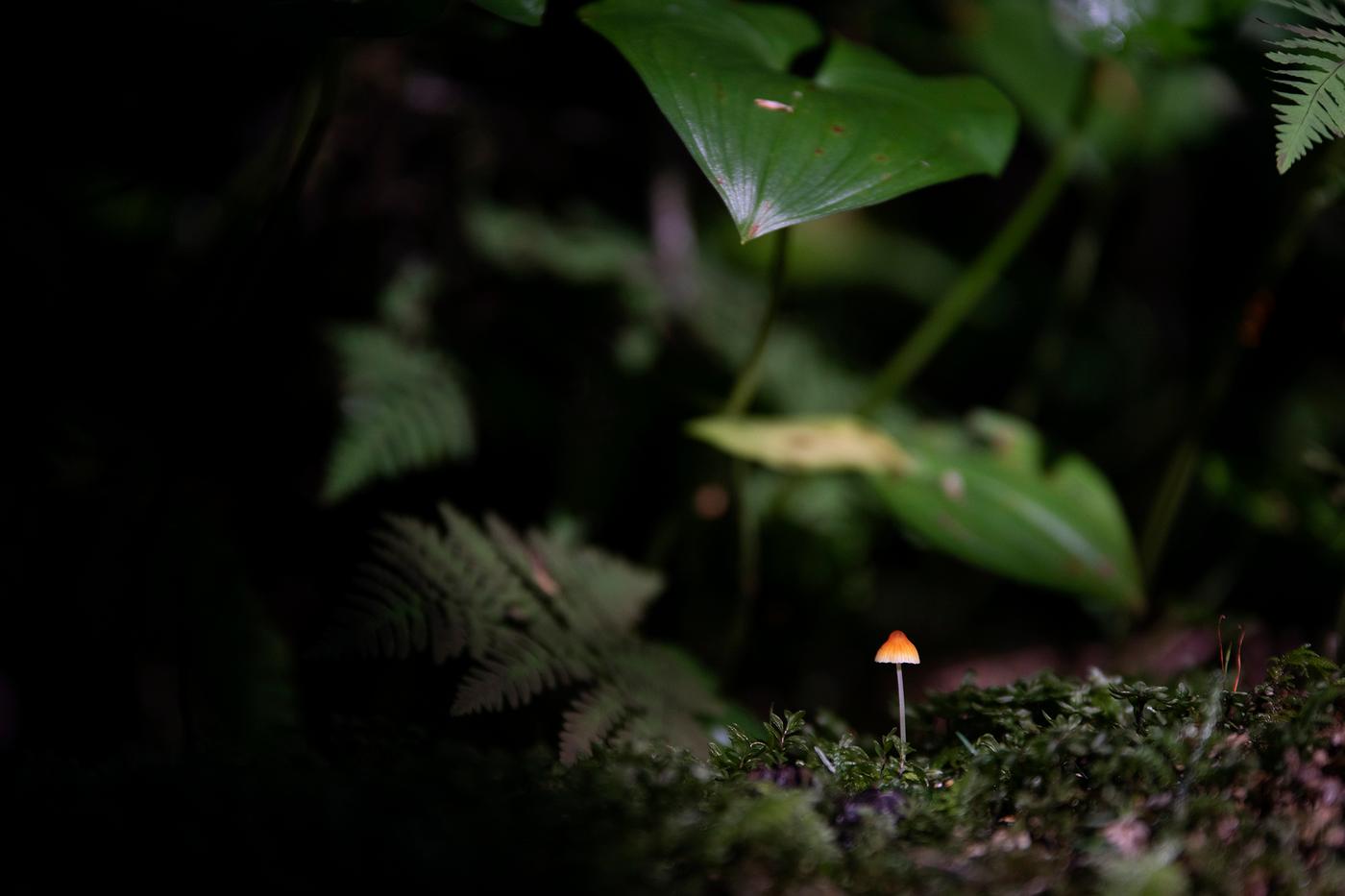 Kodiak is more built-up than Prince of Wales with restaurants and shops and a fleet of 1,000 fishing boats. Our time is easy. After three nights, we head to the airport to fly home. The fog is thick. We pass through security and wait with our masks on. The plane never arrives. The intercom announces that the flight has been canceled. Everyone leaves. I call the airline to reschedule the flight. It’s Monday morning and the woman on the phone in Phoenix says there’s nothing until Friday. I research the ferry schedule. There’s one setting off the following morning at 4 am. We cancel the flight and book the ferry. 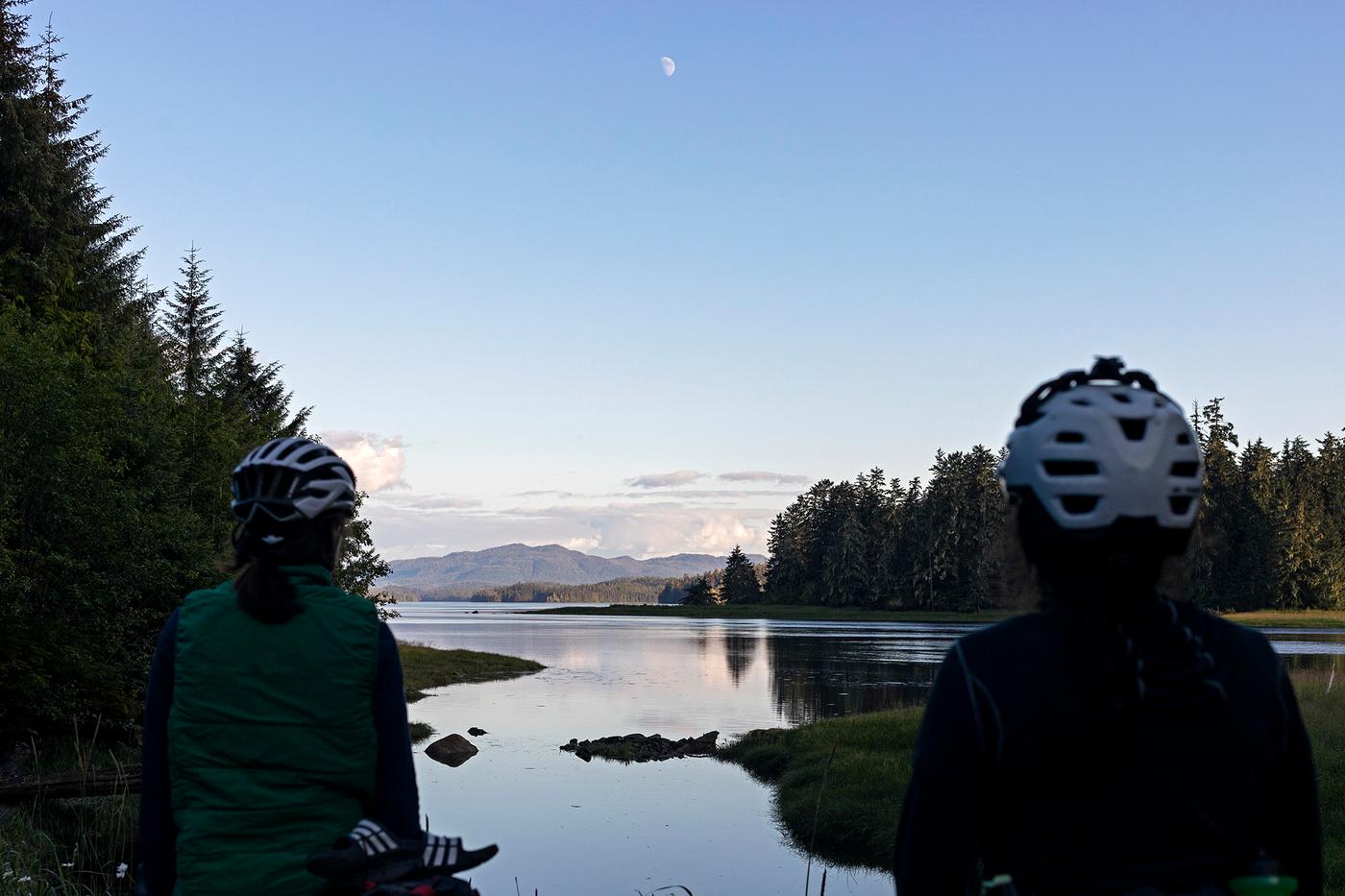 Then, I get a message that we’ve been rescheduled to an evening flight, but we already canceled it. Our options are to repurchase the last two tickets or take the 12-hour ferry and 224-mile road trip back to Anchorage. We jump on the flight and cancel the ferry. I go for a final run on the Emerald Island. With the sun shining, it looks so idyllic. We’re ready to move on, but we can’t just leave. The truth of island travel, like most adventure, is to jump on chances when they arise and stay patient with the outcome. These are special places that are hard to get to. Part of the allure is their seclusion from the mainland. I want everyone to be able to see and pedal Alaska- the islands, the interior, the coast, the southeast, the north slope. It’s here and it’s changing. I’ll endlessly find value in the roads that I ride, but the most exciting are the ones I haven’t seen yet.