Rainbow-colored, grinning unicorns jump up and down, cheer, and offer you homemade chocolate chip cookies as you pedal past. Are you delirious? Dreaming? Bonking? No, you’ve likely reached an aid station at Rasputitsa Dirt — New England’s most community-based, grassroots, and visible gravel race and creative bike event of late. 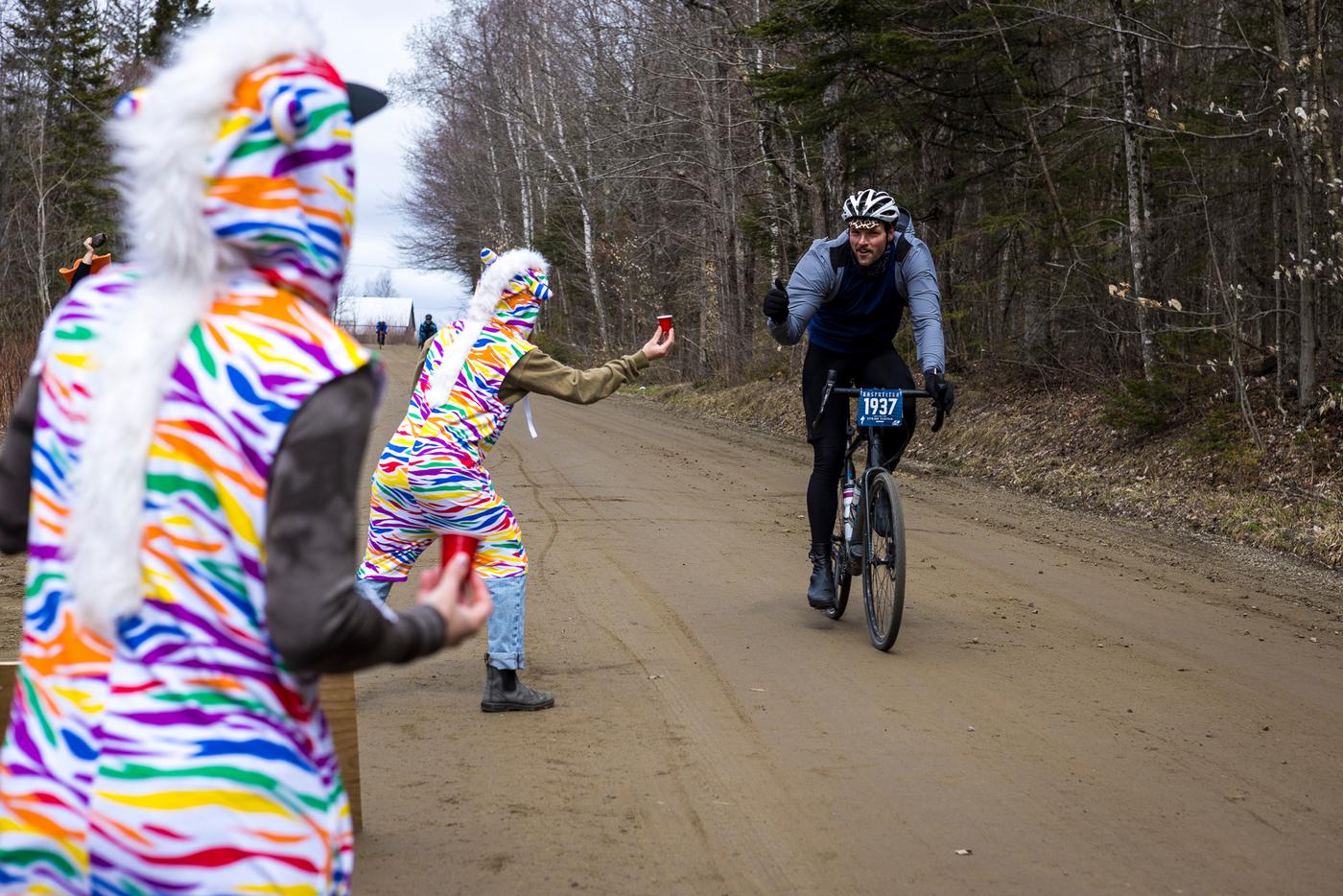 When Heidi Myers and Anthony Moccia set out to create a race, they wanted to create something fun for themselves and their friends.

In 2014, the first Rasputitsa — Russian for “mud season”— had 300 registrants. On April 30th, 2022, the seventh, Myers and Moccia welcomed over two thousand participants. 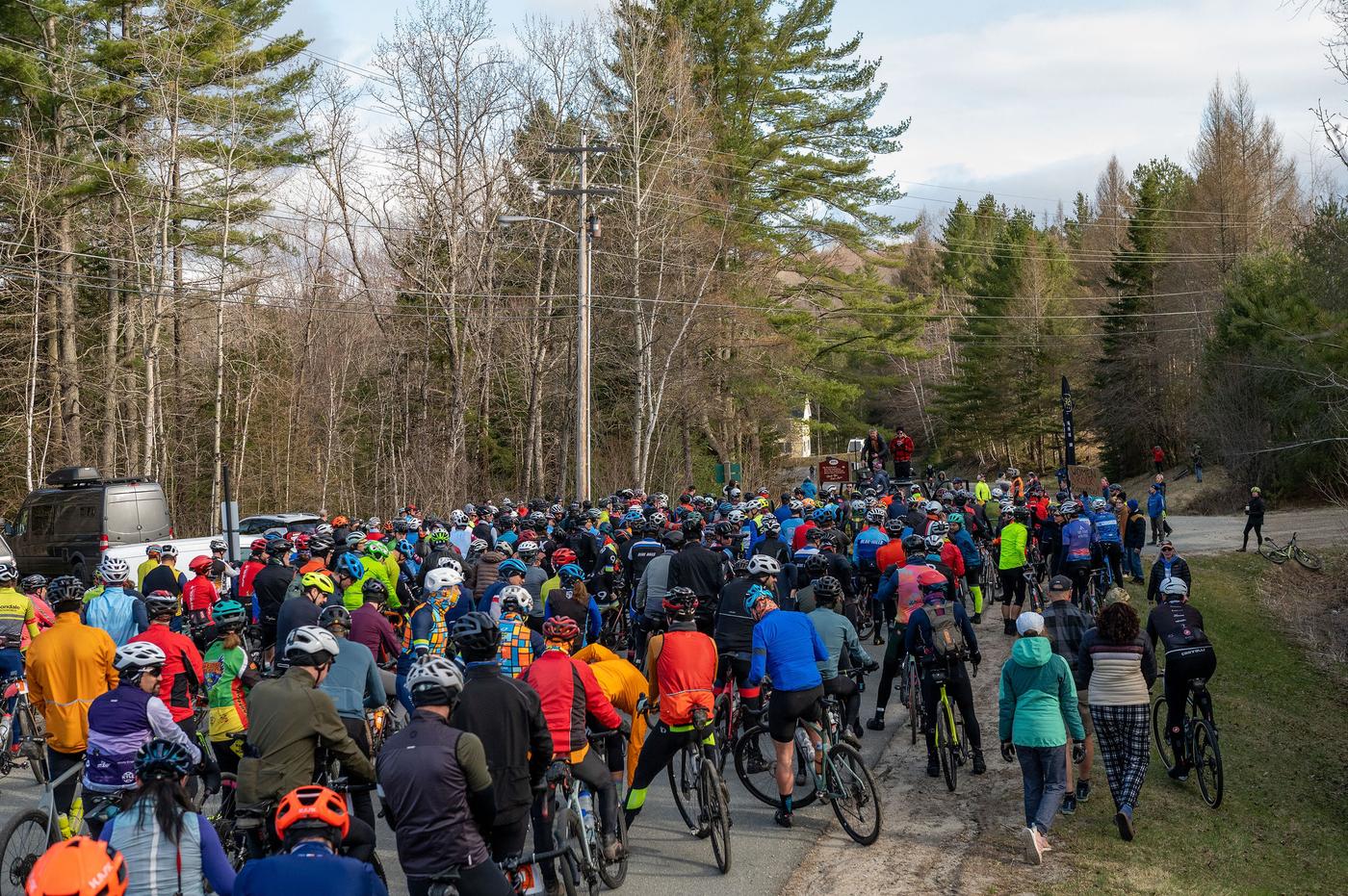 What exactly is Rasputitsa?

When the event website states they have professional timing services, “but for the most part, the race is against yourself with the largest award going to the Lanterne Rouge recipient,” the last person to cross the finish line; you know you’re registering for a different kind of race. Rasputitsa 2022 was a party, a bike race, and an eco-friendly event weekend, sans printed race guides. It offered three-route lengths — 40K, 70K, and 100K — with a Friday pre-ride led by Lea Davison and PRIDE Rides VT, an AC/DC cover band, a gravel confessional booth with the highly spirited, Bobby Wintle, and the Mid-South gravel crew, the “problem-child” kids-care zone, a hair-do station, a gear repair, a vegetarian-friendly food truck, and the Dirt-Church VT beer garden.

But it’s the people behind this trailblazing gravel event that make it so special. 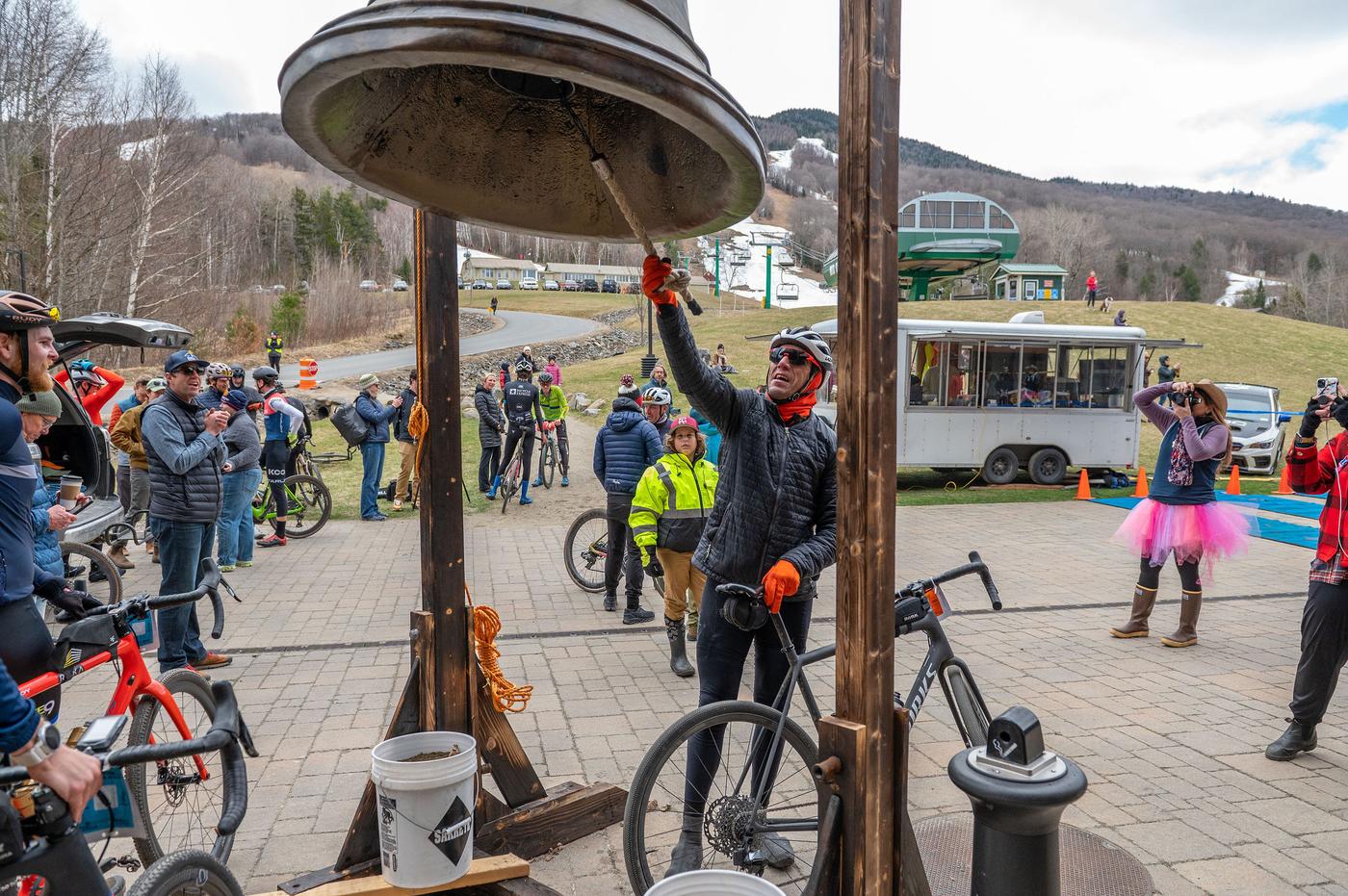 In 2002, Myers and Moccia met while working at Garneau. Myers worked in custom sales, eventually heading their U.S. marketing department, and Moccia was an outside sales rep. Although Myers was working in the cycling industry, she felt largely on the periphery of it. A self-proclaimed heavy-set woman, Myers did not identify with the predominantly male, lithe image projected as the typical road cyclist.

Just six years ago, Myers was at Interbike working with Garneau. Next to them, SRAM’s well-endowed, scantily clad women in mini-skirts and bikinis were handing out swag to attendants of the convention. This sexist marketing tactic made Myers feel even more like an outsider. 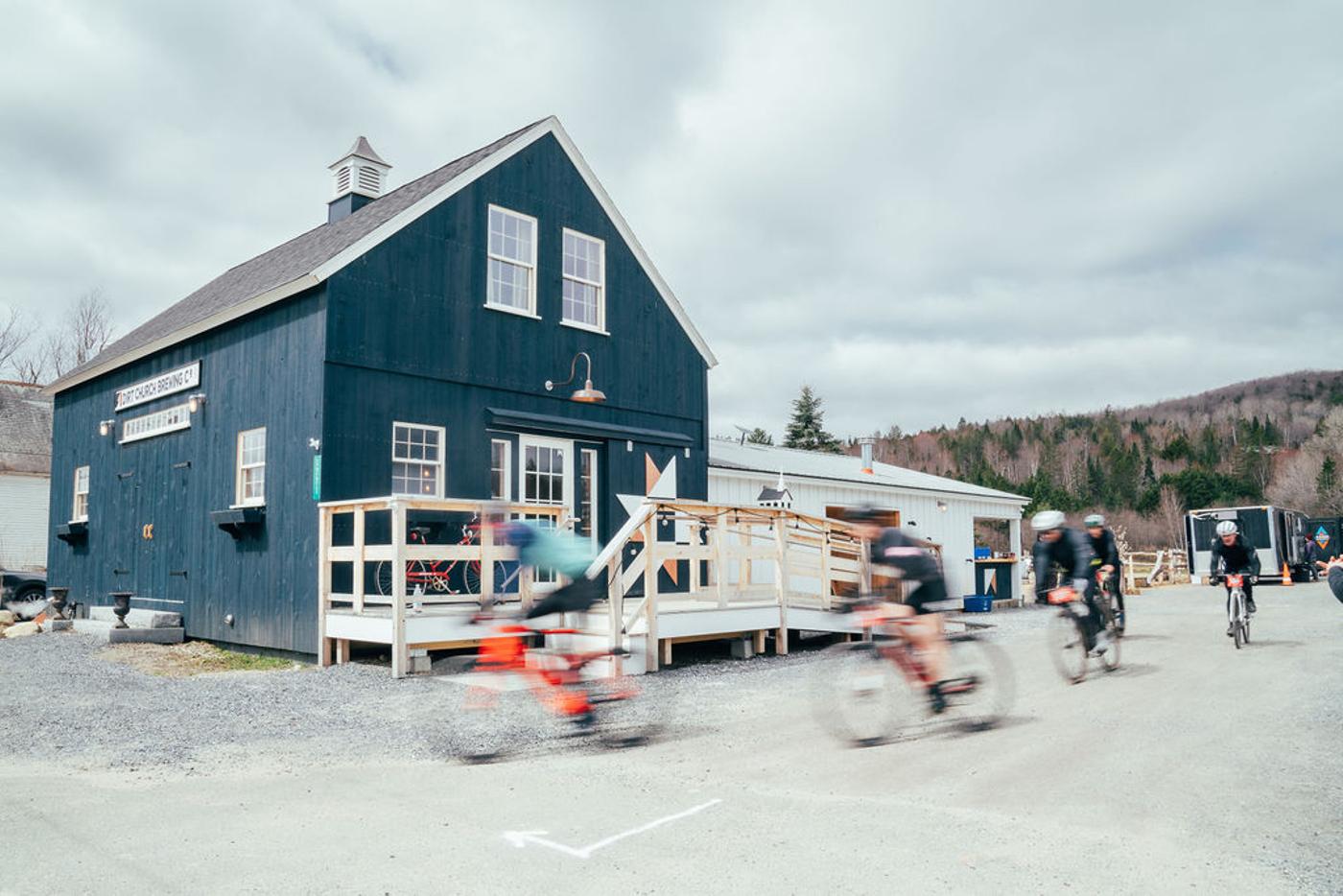 Luckily, Moccia and Myers bonded over shared visions of a different cycling world. Moccia encouraged Myers to ride despite the disconnect she felt. He gave her support, advice, and guidance on gear and equipment. 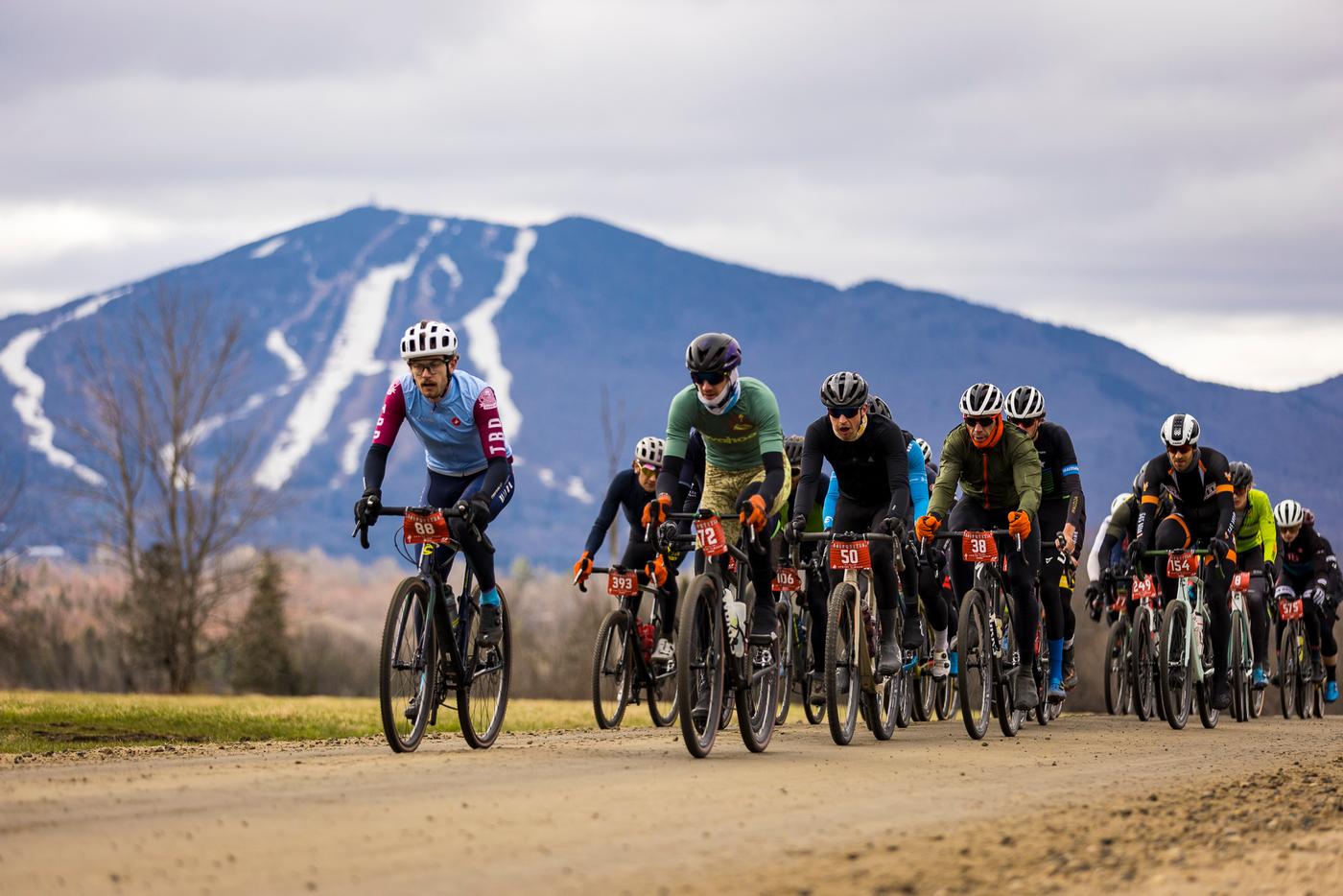 At the time, gravel races were just starting to emerge. Chris Skogen pioneered the kind of off-road racing Myers aspired to create. He began the Almanzo 100, a hundred-mile unpaved race across southern Minnesota where the cost to enter was merely mailing him a postcard. The Almanzo existed from 2005 to 2014. Myers said it was a community-centered event and “a hell of a hard racecourse.” After connecting online, Skogen and Myers shared the sentiment that bikes are awesome.

“[Anthony and I] both loved watching the Spring Classics,” said Myers, “so combine the two, and we were like, ‘let’s do a gravel spring classic!’”

“We had no idea what we were doing,” she said. “We still don’t really know.” But what they’re doing is working. 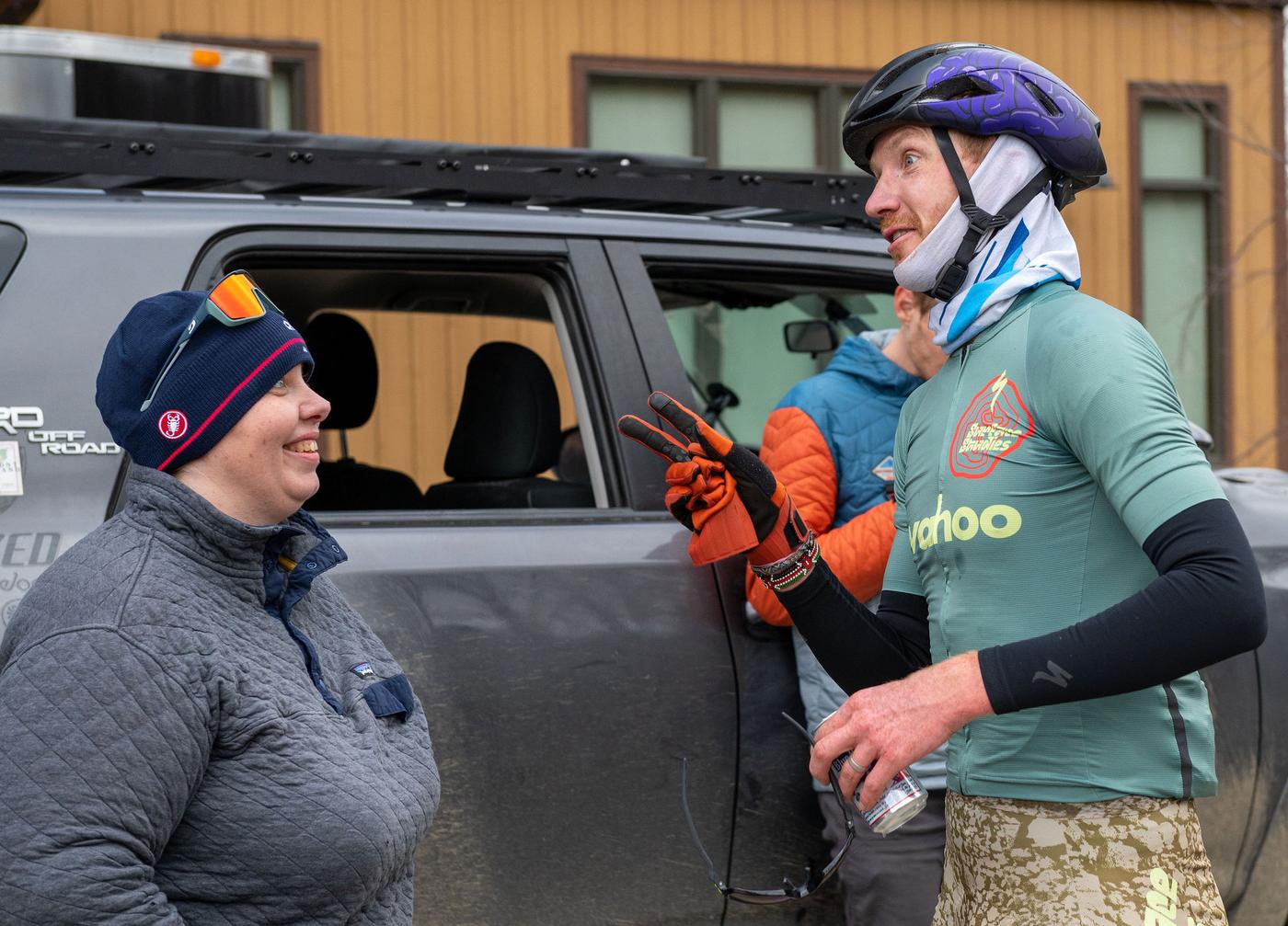 Although the path to creating change is not an easy one, that’s precisely what Myers set out to do. In 2014, she and Moccia initially came up with the idea for this spring classic — now an epic, must-experience gravel phenomenon.

If you know of the race, you know it’s hard because the course packs in a ton of climbing over not many miles. But the difficulty of Rasputitsa depends largely on the weather. Those of us racing this spring had a much kinder experience than racers in 2019 when it snowed, and the course was so gnarly, muddy, and frozen that everyone came to a section where they had to hike-a-bike to proceed. 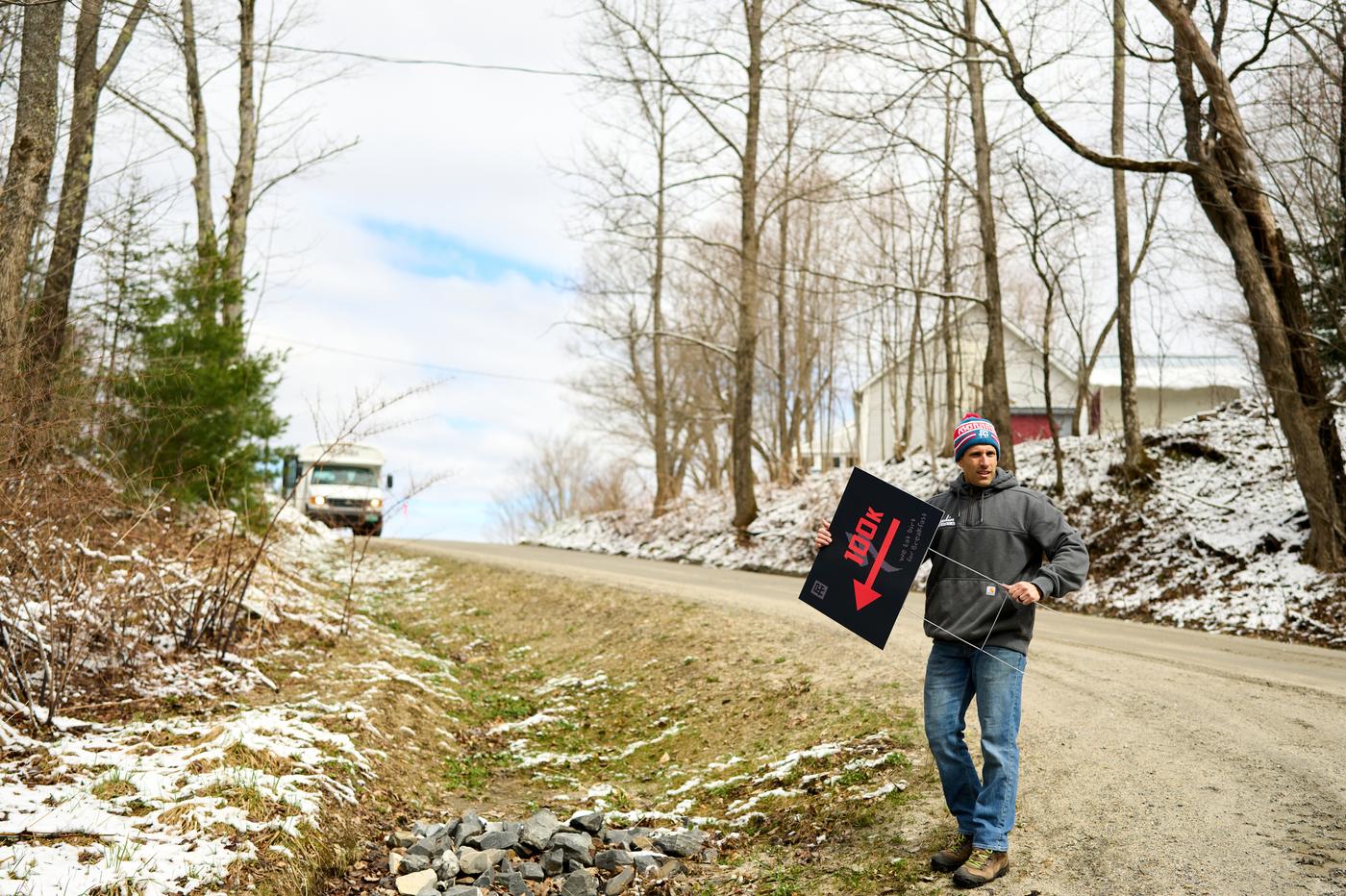 This year, there were flurries a few days before the race; however, on the day of, the conditions were pristine: a little mud, but mainly dry, hard-packed gravel, with weather that started in the cold, low 30s in the morning, and turned crisp and sunny during the day. Gravel at its best and speediest. Top finishers of the 100K in the men’s and women’s fields maintained speeds of 18-21mph over the entire course with 7K of climbing. 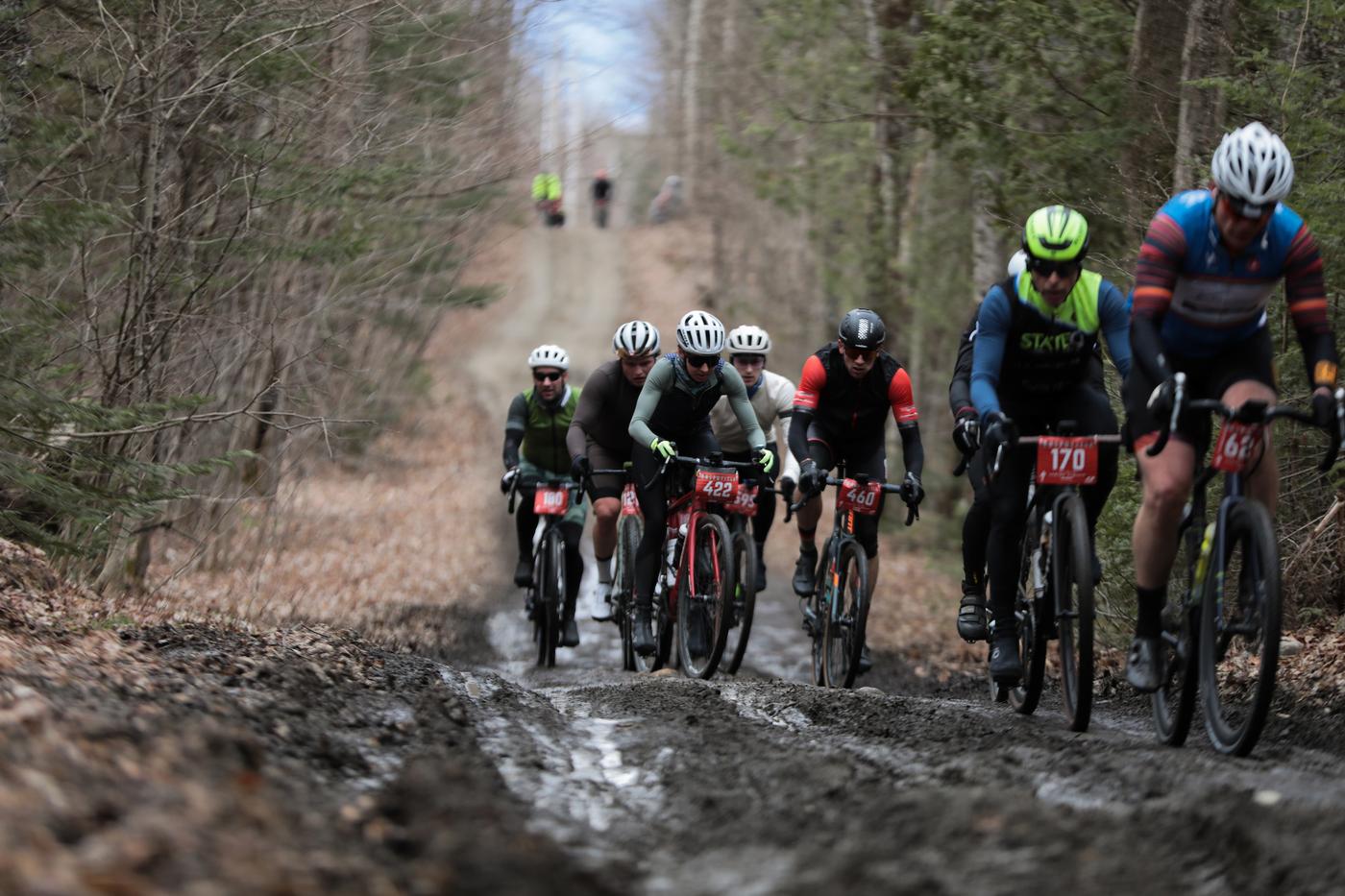 The concept behind their first gravel race, “The Dirty 40,” held in Derby, Vermont, remains to this day: to ride bikes and have fun. Moccia traveled from bike shop to bike shop handing out postcards to market the race. They had no paid advertising. And no budget. Instead, they gave out the first 50 spots to riders for free before realizing that they would need professional timing. They charged the bare minimum to cover the cost. At $25 per entry, over 300 riders registered.

Bitten, smitten, and stoked by the success of their first race event that fall, Myers and Moccia dreamed bigger. With their shared love of the spring classics, they began planning the first Rasputitsa for the spring of 2014. 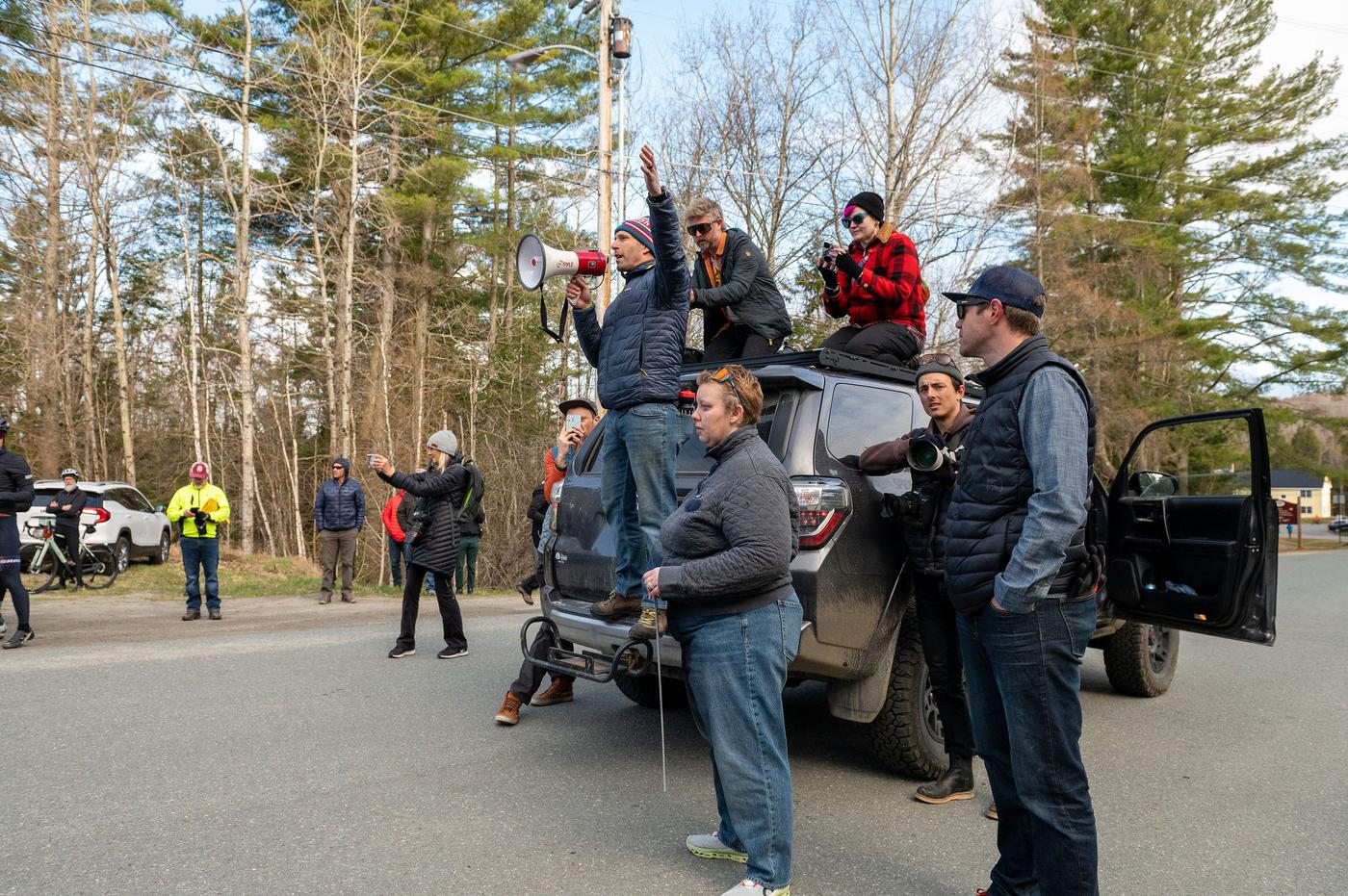 Using Strava maps on his computer, Moccia handled the route planning during the winter. Early that spring, Myers went out to pre-ride the course and take pictures. At one point, the route led to a seemingly dead-end mass of snow piles and trees. She called Moccia. “I’m standing here in snow up to my waist, and there’s no road.” He checked his map. “I’m looking at the map and there’s a road there,” he insisted. “Nope, there’s no road,” said Myers. She sent him a photo. The so-called road Moccia could see on his maps was an unmaintained, Class IV dirt road covered in snow. 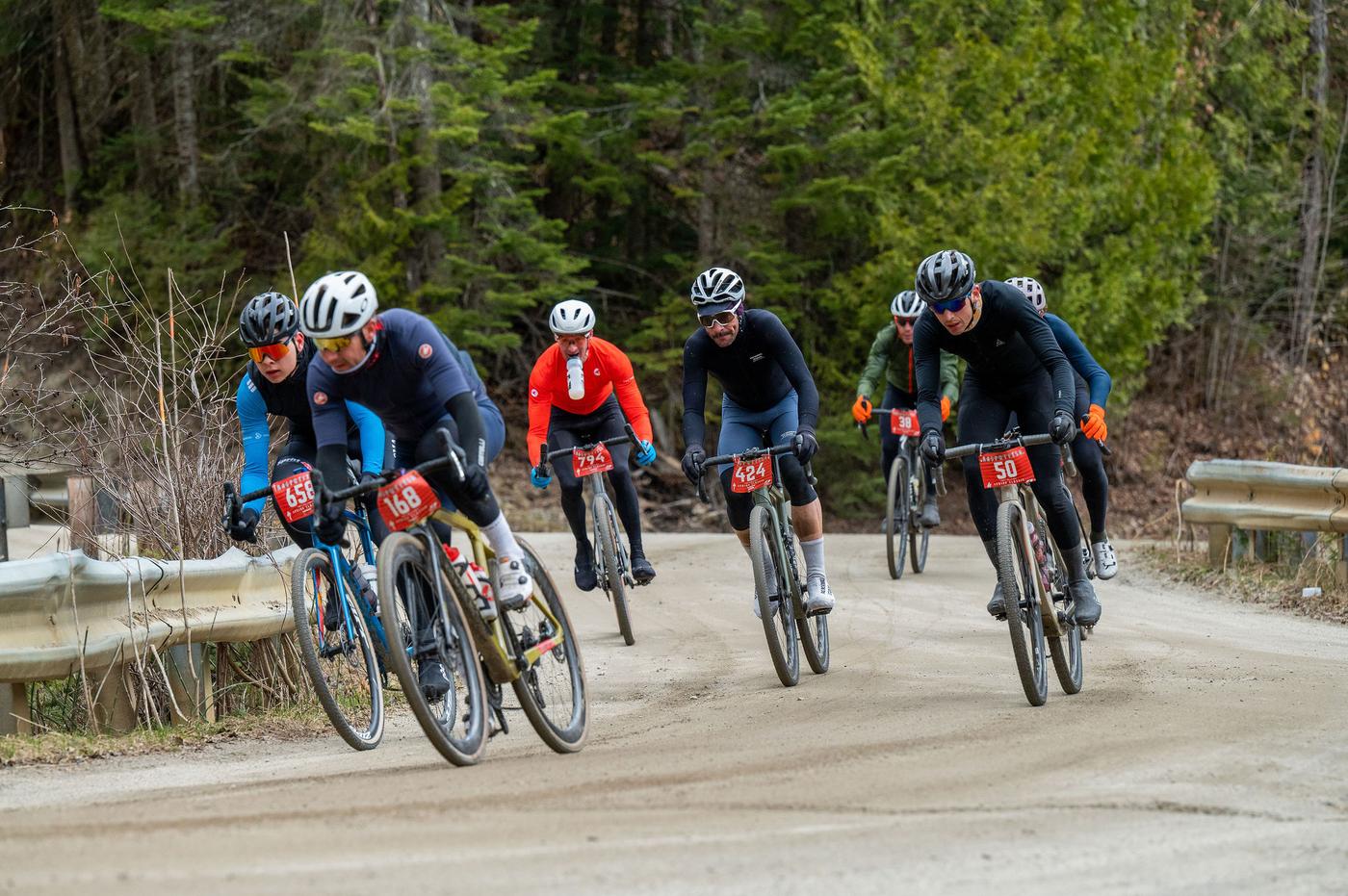 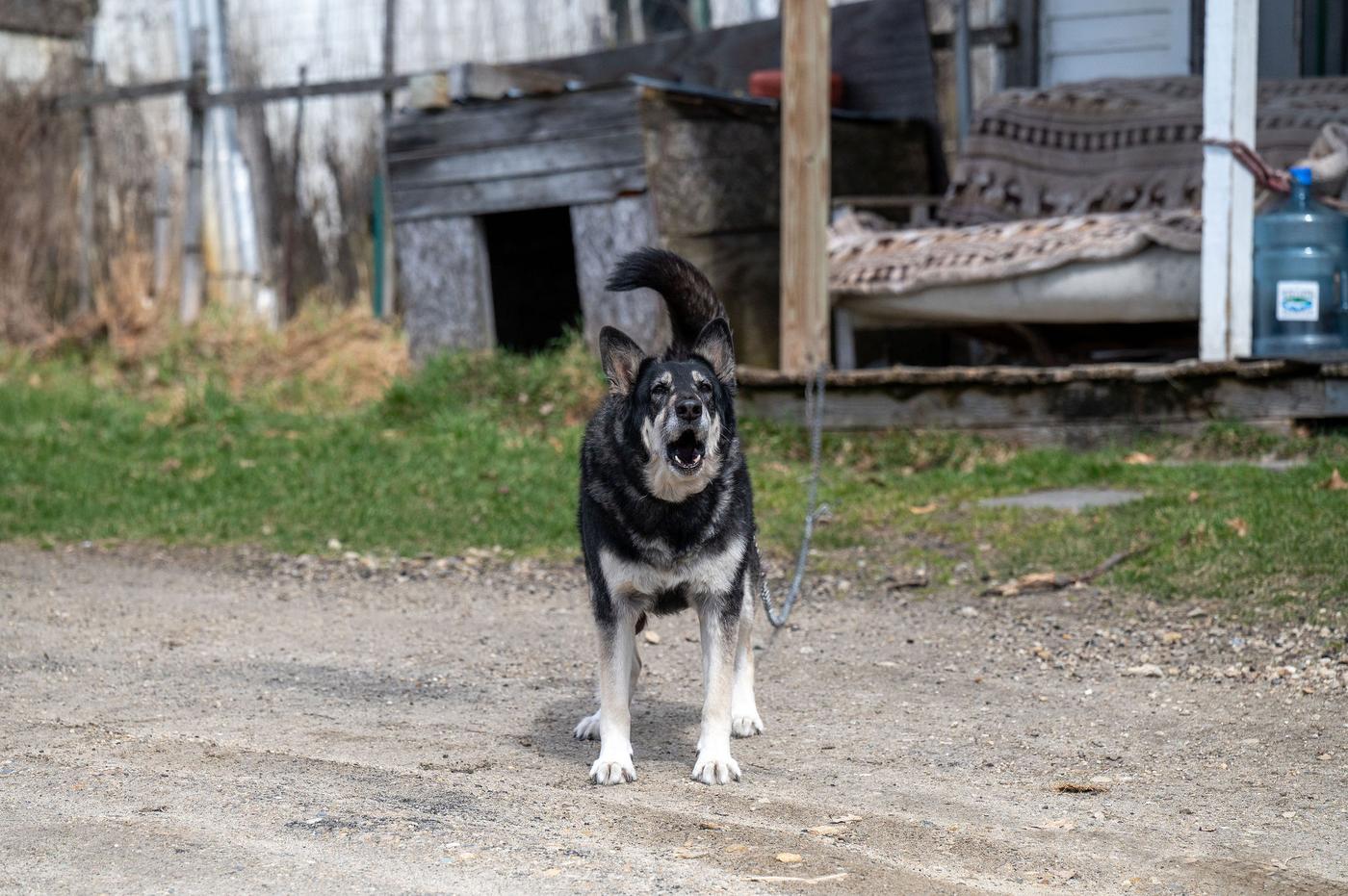 Myers and Moccia had already widely published the course, route, and map, including this unmaintained road, online and in all their race communications. As they are wont to do, they rolled with it. They even added to the tundra ambiance by having friends dress up as Yetis offering shots of maple syrup to riders in eco-friendly, toss-away glasses made from ice.

In 2019, family members of finishers worried their loved ones were hypothermic when riders claimed they’d seen a Yeti. But Myers reassured the families that no medical attention was needed. “They’re our Yetis out there,” she said. 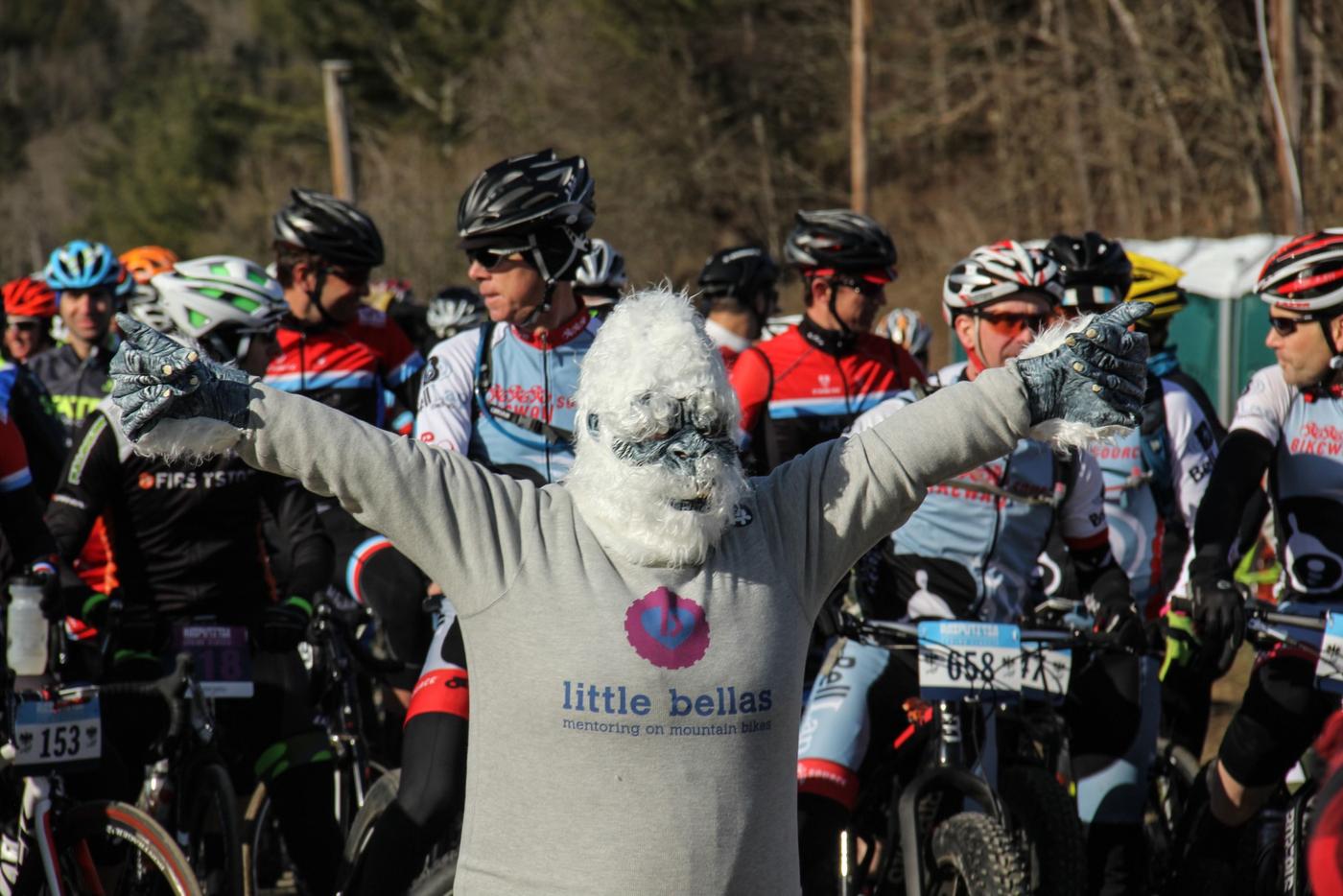 After their first few races, Myers and Moccia shifted their focus from attracting their friends, who were pros, to making the event more about celebrating everyday recreational riders and enthusiasts like themselves. Myers stated their motivation towards inclusivity is “derived from a real effort to get to know our riders. To care for them as people, not numbers. We lead with that; the rest just comes.” 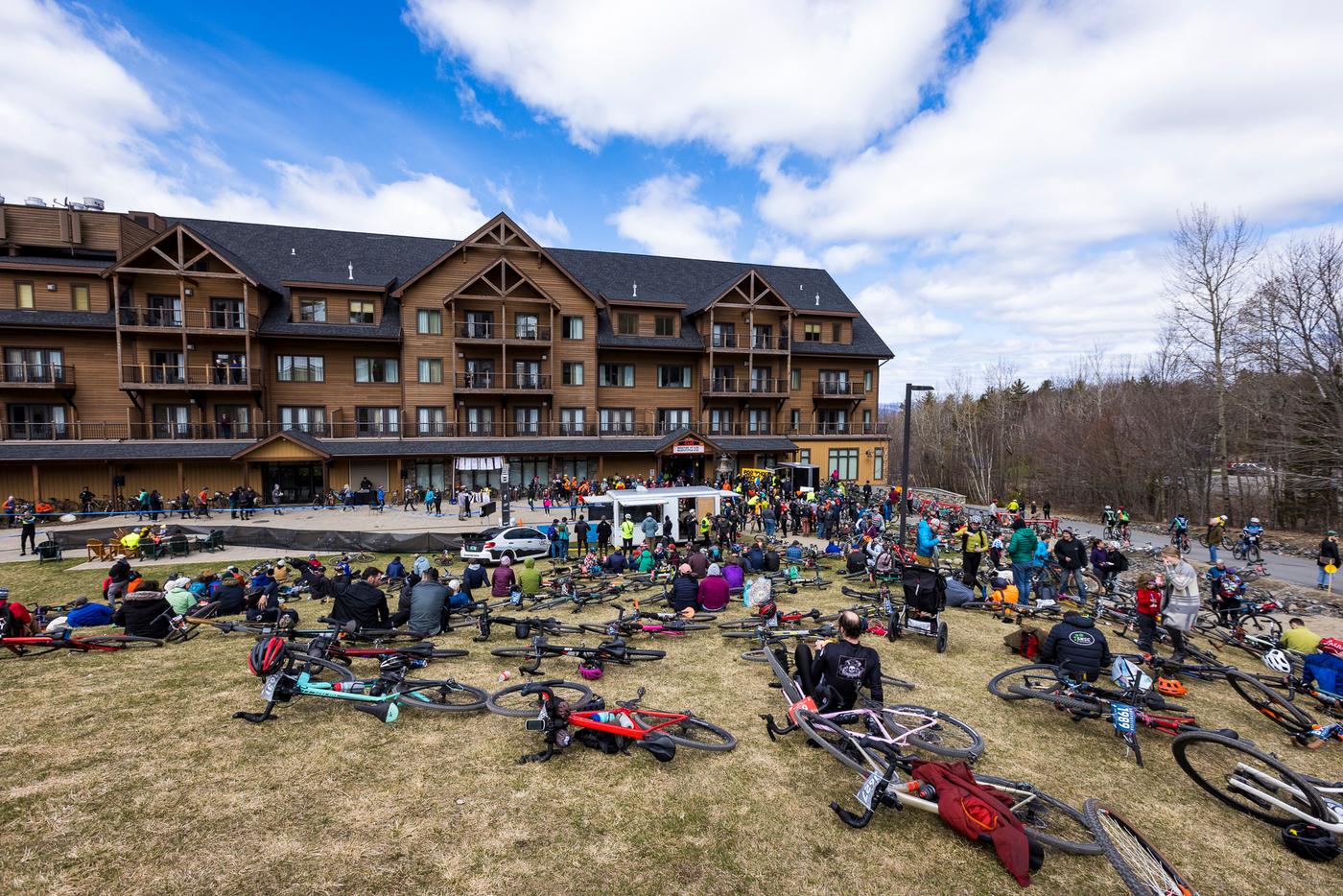 During the race’s two-year hiatus, Covid’s unpredictable shutdowns created numerous obstacles in trying to plan with their partners, vendors, and the mountain town of East Burke. The stress of the unknowns was reason enough to fold the race indefinitely. Added to that, Moccia was diagnosed with tonsil cancer and Myers was struggling with symptoms from Young Onset Parkinsons. She needed surgery to implant a device that would help regulate the dopamine in her brain. Packing up their race dreams and walking away would have been understandable. 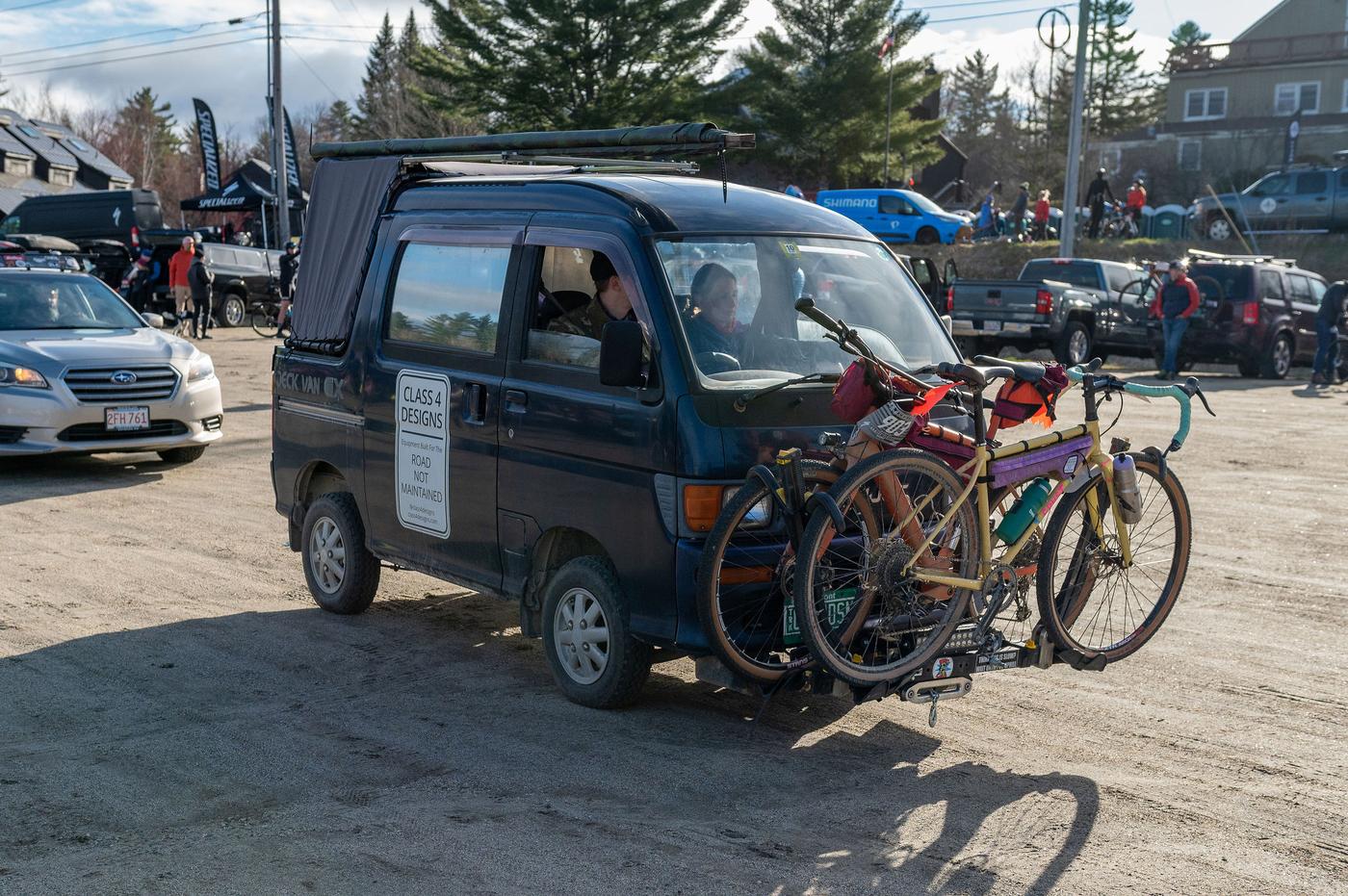 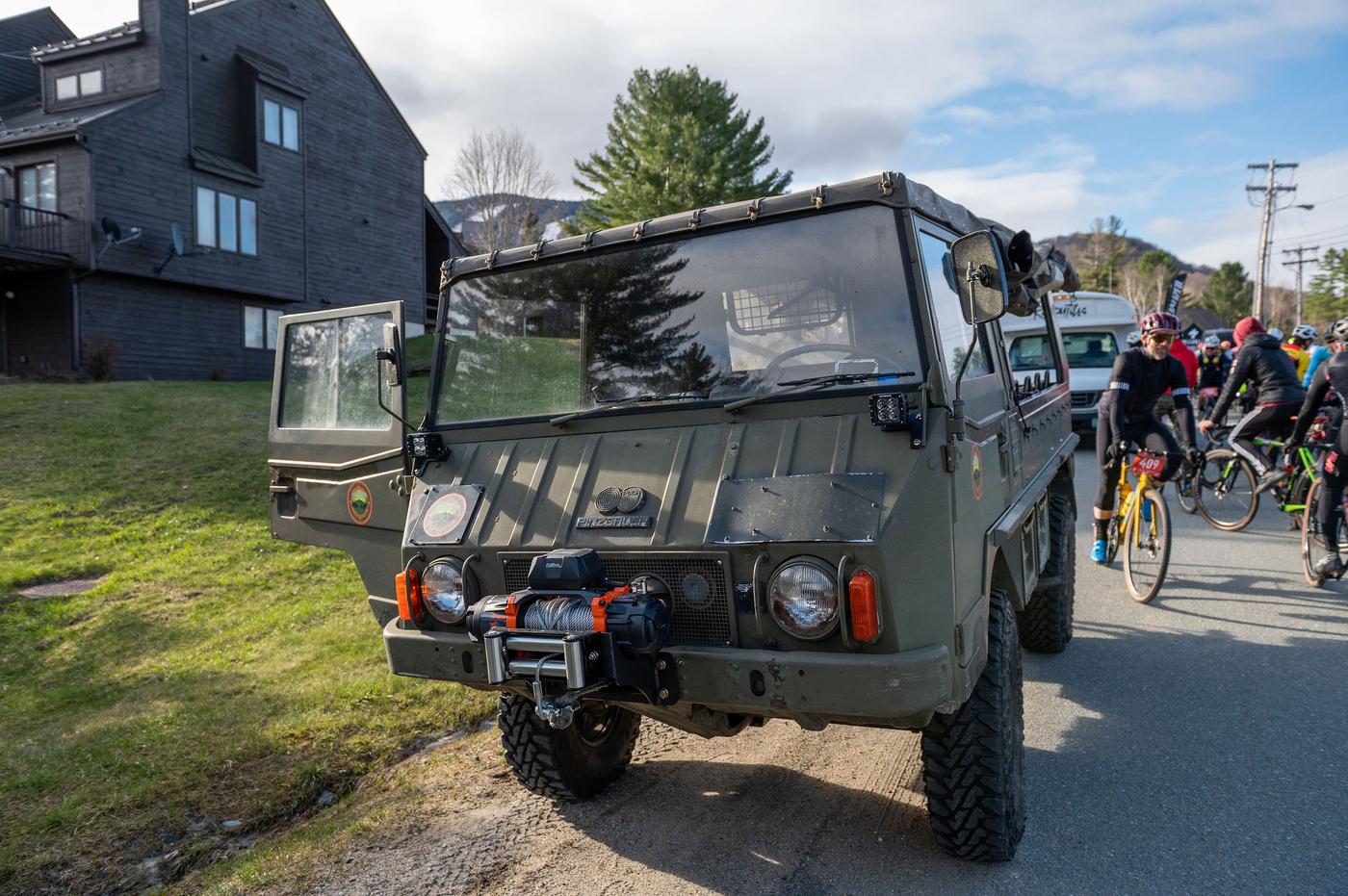 The best of friends, Myers and Moccia had met for lunch weekly for several years. But during the first two years of the pandemic, they weren’t even able to speak much less see each other. Moccia went through chemotherapy, and Myers underwent brain surgery this February.

Through her health struggles, Myers has become bolder but kinder. She is not afraid to go against the norm, or ask hard questions of herself or the cycling industry. Myers believes that the industry is and has always been “too focused on the 1%,” and that, if gravel is intended for all, we need to talk about the entire field, not just the fastest at the front but the people in the back, in the middle, and those who make the races possible from the sidelines. 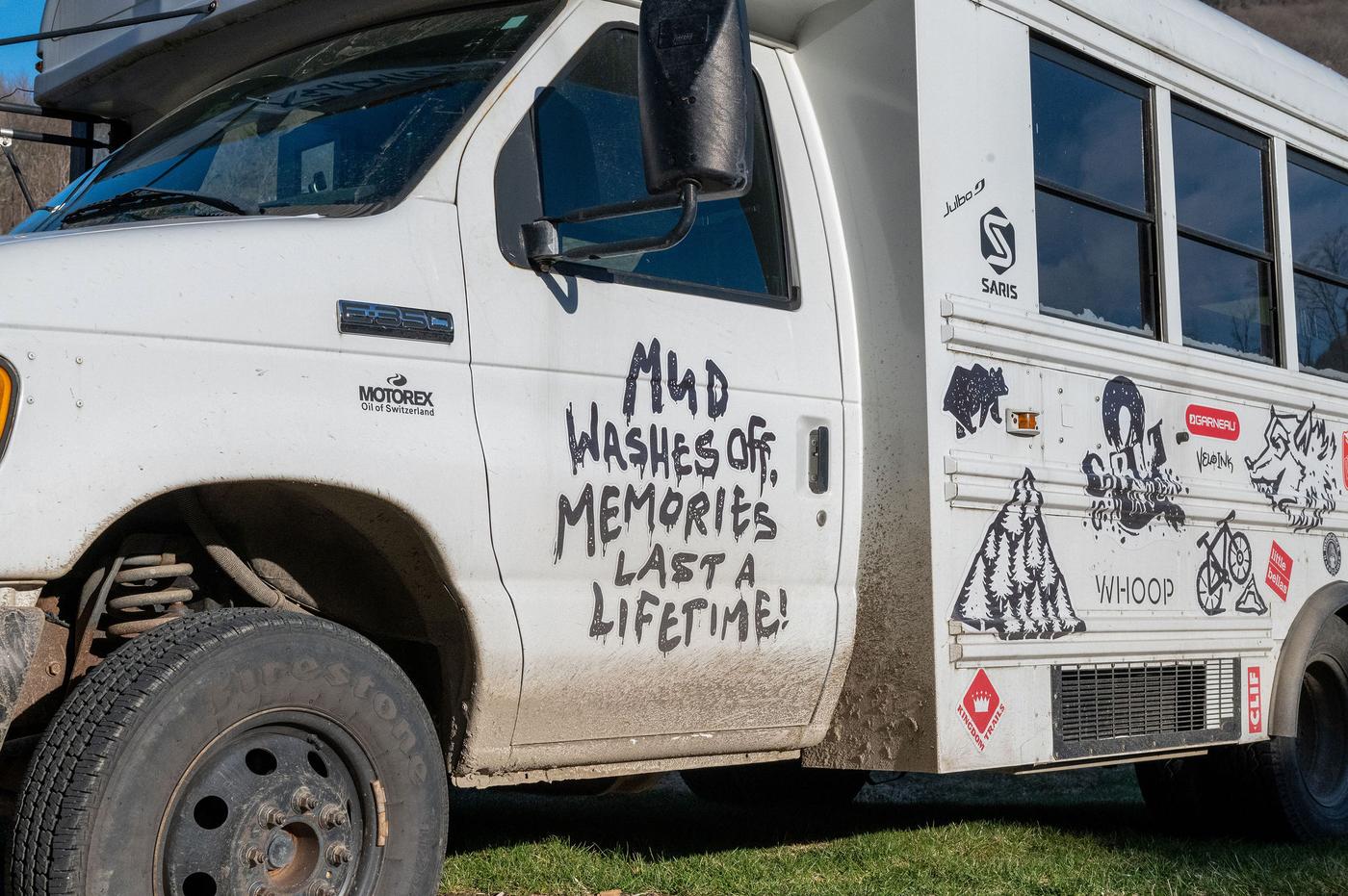 This year more than any other, Myers said they finally understood the concept of community and fully embodied it. To welcome and engage with all types of riders, they offered complimentary race entries to people who are often marginalized by society. Myers partnered with PRIDE Rides Vermont for the pre-ride shake-out led by Lea Davison. She also offered participants of PRIDE Rides Vermont a free spot in the sold-out 40K Rasputitsa course, and she helped provide local housing to ensure they could attend the race. 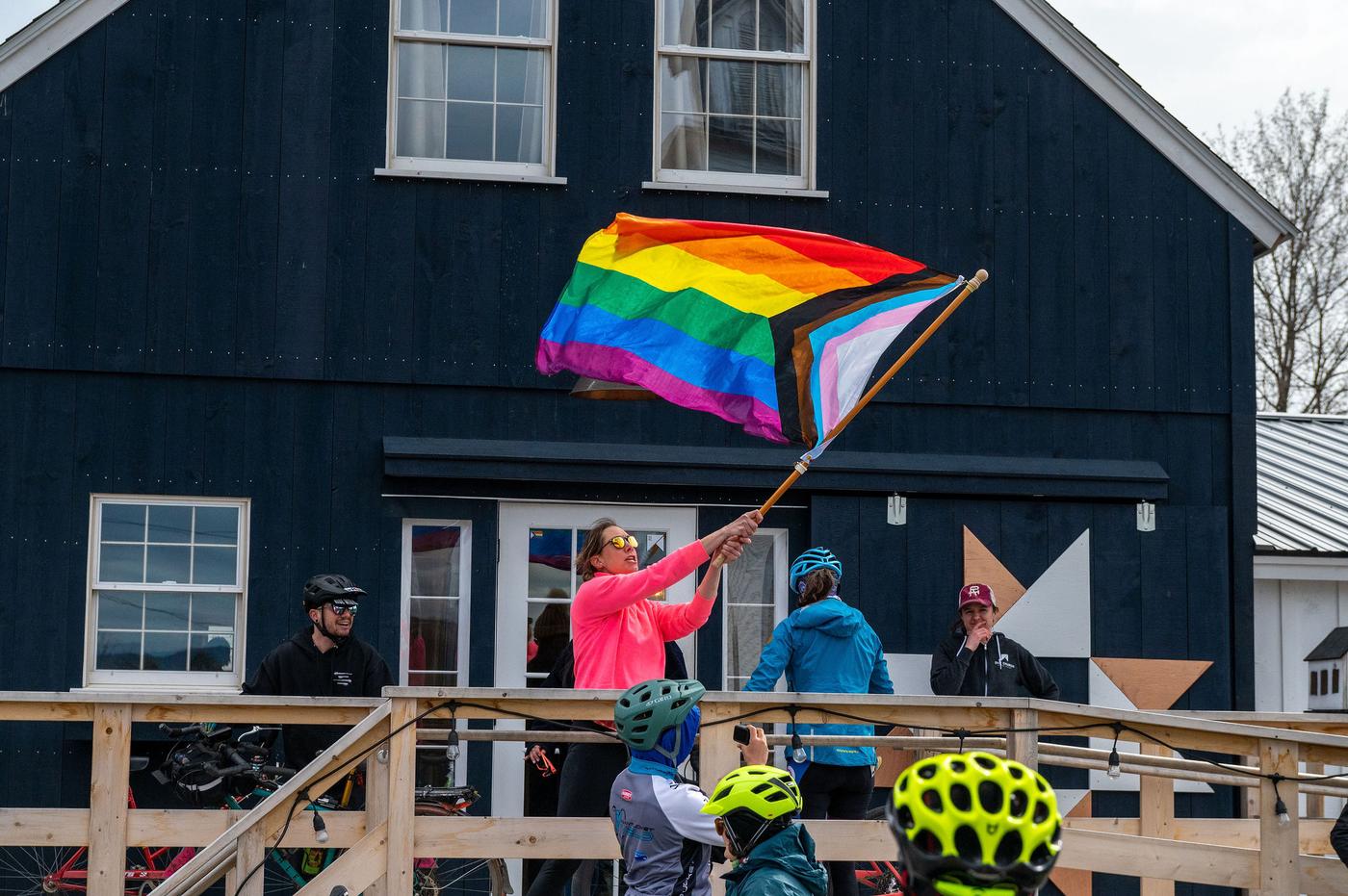 In keeping with their tradition of including, welcoming, and celebrating people who feel they’re on the periphery, for 2023, they will offer 100 registration spots to indigenous populations.

Rasputitsa will also continue to jam along with themed music. This year was an AC/DC cover band; next year, 90’s hip hop. Myers is even trying to secure Snoop Dog for the pre-ride event. TBD on that.

The idea of pairing their race weekend with music is to ground everyone in the tone and sentiment that yes, this is a hard race, but it’s meant to be fun. And music is yet another way in which Myers and Moccia make Rasputitsa more accessible and inviting; just as bikes should be. 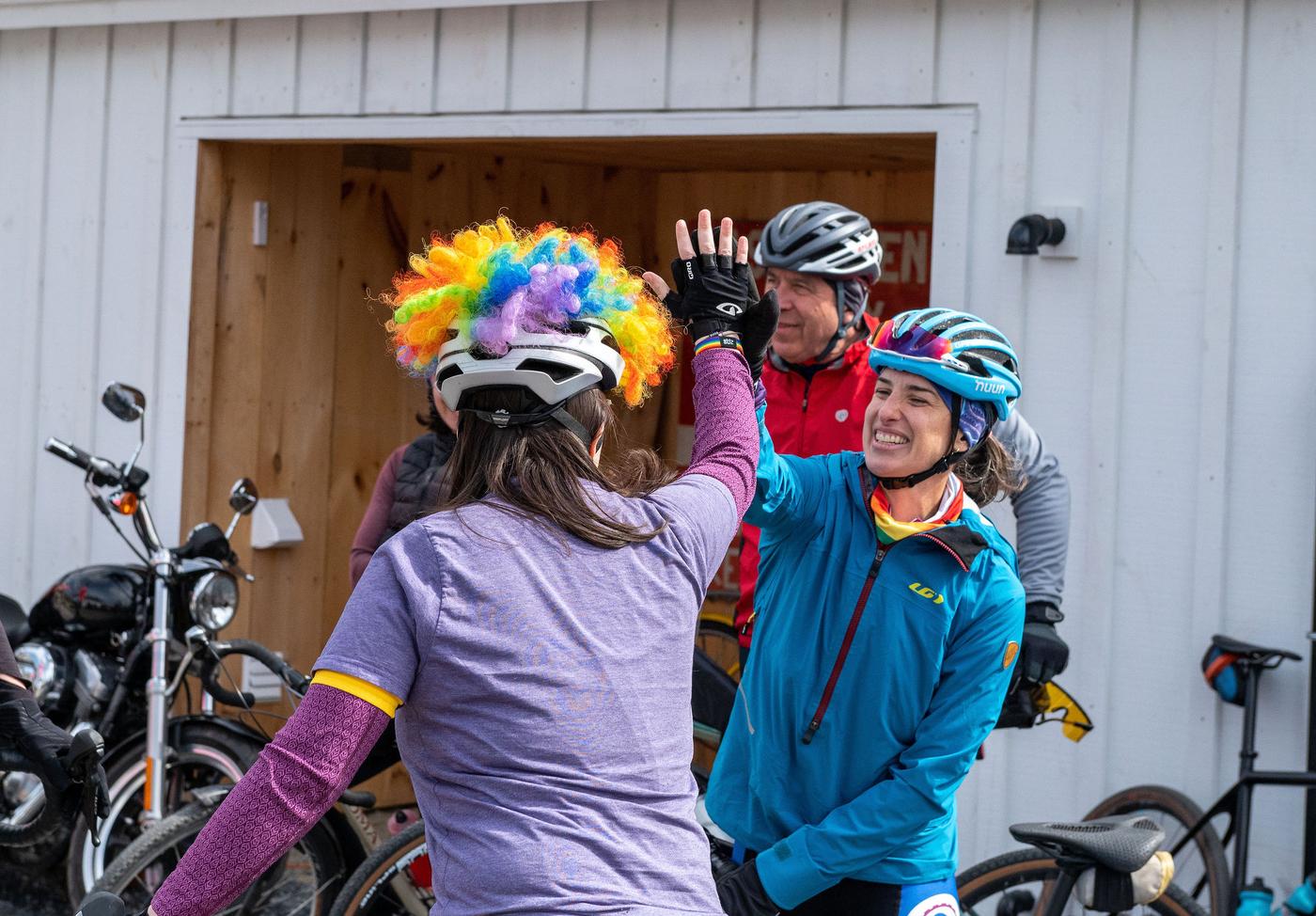 “The thing about Rasputitsa that can’t be imitated or copied,” said Myers, “is it’s just such a 100% passion project. There’s no formality in what we do or how we do it.”

Neither Myers nor Moccia has ever personally profited from the race. Each now has a day job unrelated to cycling: Myers in marketing for Sterling college, and Moccia as a buyer for a lumber company. Instead, they’ve donated any proceeds made – after they pay vendors, police, and the timing company – to causes they care about such as Little Bellas, and PRIDE Ride Vermont. 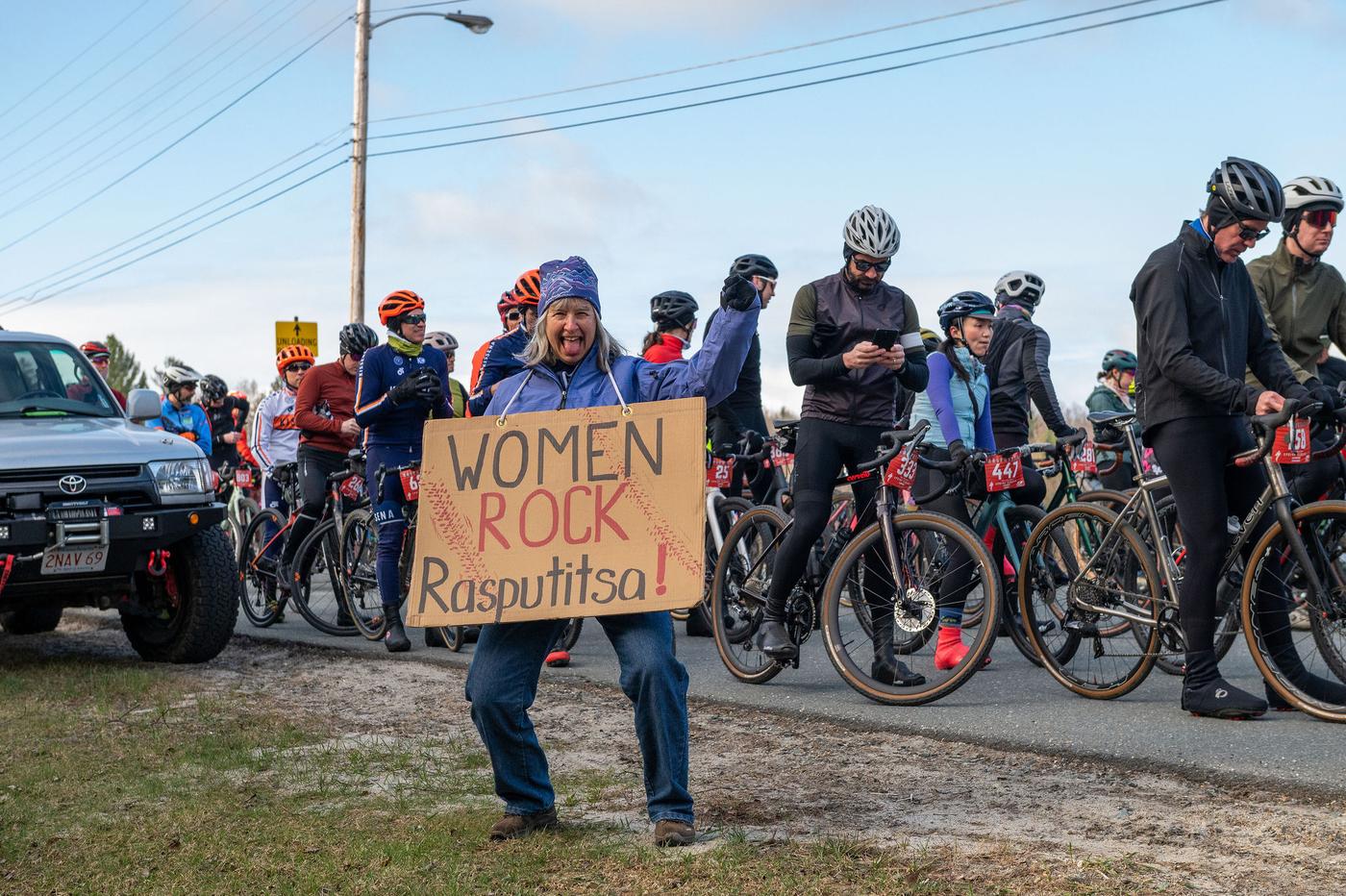 Myers says their ethos has a sharper focus now: “to ride bikes, have fun, do good, and make cycling better.” She continued, “There’s still a lot of work to be done for people to feel accepted and embraced.”