When the term ‘community’ comes to my mind specifically in reference to bikepacking events, I envision a group of cyclists with uniquely purposed bikes who have come together with a common interest. Their bikes are laden with an assortment of bags, accessories, and snacks, and the common interest is of the “let’s ride our bikes for a long time” (Type II) variety.

This means everyone has gathered with the intention of having a good time, but are well aware that at some point they will be subject to the internal conflicts associated with a long bike ride. Especially once the feeling of that saddle becomes reminiscent of a concrete slab. This is where I find the beauty in the bikepacking community, through the mutual experiences and shared stories of friends and acquaintances who have all made the individual decision to go for a long bike ride. Whether the intention of the ride is to compete with others or challenge one’s own physical fitness, mental well-being, and immersion into nature, we are all rotating those pedals and sharing in the grounding experience of seeking. The day before the second annual Grand Depart, I met Patrick at the Bullet Grill House in Point Blank, Texas. This is not only the starting location of the event, but also the home base for all pre- and post-race accommodations and festivities. Patrick and I discussed the short film I was making of the event and his purpose for establishing the event in the first place. There were three main factors he mentioned that stood out to me: After we chatted, Patrick stepped outside to begin checking in the participants that were starting to show up. As I remained in the booth enjoying a burger and fries, I listened in on a conversation among a few older gentlemen that was taking place in the booth next to me. It was a typical discussion that many bikepackers are familiar with, and included some of these typical exclamations and questions, “I don’t even drive that far in a week!”, “Where do they sleep?”, and “How long does that take?” Except, the difference with these questions is that they were met with well-informed answers from one of the gentlemen who had been a patron of the Bullet Grill House during last year’s event, and evidently did his homework: “Some of them don’t even sleep, they do the whole thing in one go!”, and “They have to carry everything with them, it’s completely unsupported.” This interaction not only brought a smile to my face, but it was one of the many instances during the weekend that demonstrated to me how Patrick’s goal of introducing bikepacking to the community of East Texas was met with curiosity, generosity, and (most of all) tremendous support. The community of bikepacking is composed of competent individuals who revel in the self-supported ethos. However, there can be no illusion that self-supported bikepacking could exist if it were not for the foundational support provided by the available land, businesses, and people along each respective route. 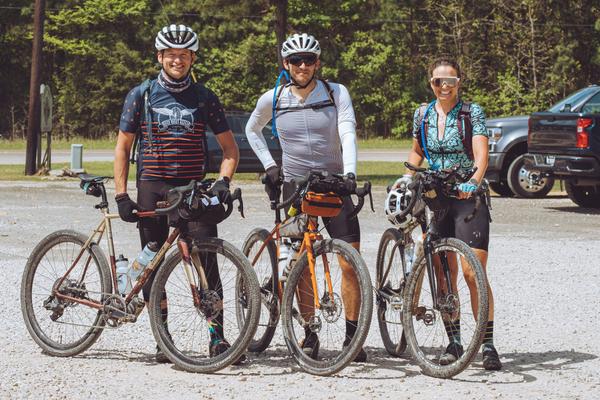 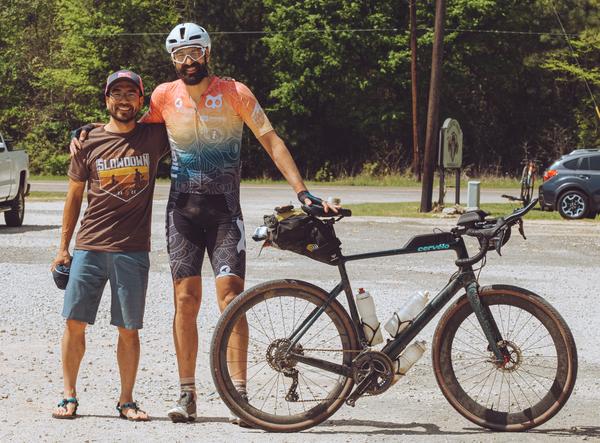 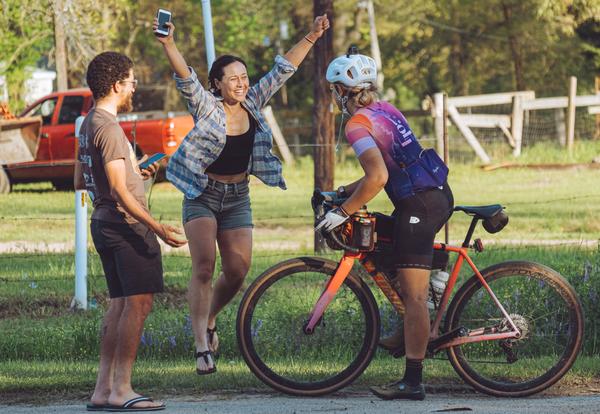 For example, Chris, the owner of the Bullet Grill House not only welcomed the East Texas Showdown with open arms in 2021, he also went the extra mile in 2022 by clearing out a plot of land behind the building for all participants to park and camp over the weekend. He even built an outdoor shower with hot water! Chris, and all of the employees of the Bullet Grill House, provided a safe, comfortable, and welcoming “home base” for riders during the event. Weather for the inaugural East Texas Showdown was less than ideal. The first year participants were met with unrelenting rain from the start of the ride, and at times had to ride, push, and carry their bikes through lengthy sections of rutted sandy roads. I was told stories that mentioned the frustrations of bloodied and blistered feet, or the horrors of rain-soaked and sand-filled bibs. Surprisingly, the weather of 2021 did very little to deter the 2022 participants. This year saw the registration size double (from 50 to 100) and sell out within 10 days of registration opening. The most impressive fact was that 94% of people who signed up for the event actually showed up on the day of the Grand Depart. This is an unbelievable rate of commitment, especially considering the fact that participants had come from all across the country. Although a bit on the hot side, the weather for this year’s event was significantly more favorable. Dry roads and blue skies made for a blazingly fast route, with the men’s Showdown winner, Kuya Tatami, finishing in 23 hours and 54 minutes and the women’s Showdown winner, Ashley Carelock, finishing in 31 hours and 32 minutes. If you are a competitive bikepacker looking for a challenge, Kuya has presented you with a monster of a Fastest Known Time (FKT) to chase, averaging more than 16 miles per hour over the 388-mile distance. Or if you are looking to bump the ride distance, you can follow in Indiana (Indy) Schulz’s pedal-turns. Indy completed the first-ever ‘Yo-Yo’ by finishing the entire Showdown route (on a single-speed bike!), and then turning around to ride the full route again in the opposite direction for a total of 776 miles in 3 days, 12 hours, and 20 minutes. Both routes of the East Texas Showdown and Slowdown provide participants with quiet paved and gravel county roads, dirt roads that wind through the Sam Houston National Forest and the Davy Crockett National Forest, a variety of wildflowers to enjoy, and a plethora of dogs (to either pet or motivate you to move forward, quickly). As I was out documenting the event in a car, I was also yearning to be experiencing it more fully by bike. My motivation to travel from Oregon to Texas was to create a short film for The East Texas Showdown, a bikepacking event that is centered around community and the celebration of going out to just “ride your damn bike.” My ability to do so was through the generous support of Kuat Racks and The Radavist. Keep an eye out for the short film which will be released on The Radavist website in mid-June.