Locke and His Esker Hayduke SS29er

George Hayduke. The fictional anti-hero created by the protector of the Western ‘wilderness’, Ed Abbey. While much of Abbey’s political pennings haven’t aged well, he still brought awareness to the American West unsurpassed by any other author of that time. Abbey’s fictional masterpiece, the Monkey Wrench Gang, is a must-read for any lover of the Four Corners and Canyon Country. In it, a ragtag group of desert rats embarks on a journey to dismantle the corporate machines threatening the cherished ecosystems found on the Colorado Plateau. The term “monkeywrenching” and even “eco-terrorist” stemmed from this book as its characters threw a literal wrench in the spokes of the all-consuming corporate machine.

Esker Cycles’ predecessor brand, Advocate Cycles, used the “Earth First” fist on their headtubes and their flagship bike was the Hayduke. When the brand became Esker, they kept the Hayduke model and its signature monkey wrench decals.

Locke reviewed a Hayduke a few years ago. You can read that review in our archives but when he swung through Santa Fe on a recent jaunt, I linked up with him and shot his own personal singlespeed 29er build. Read on for more… 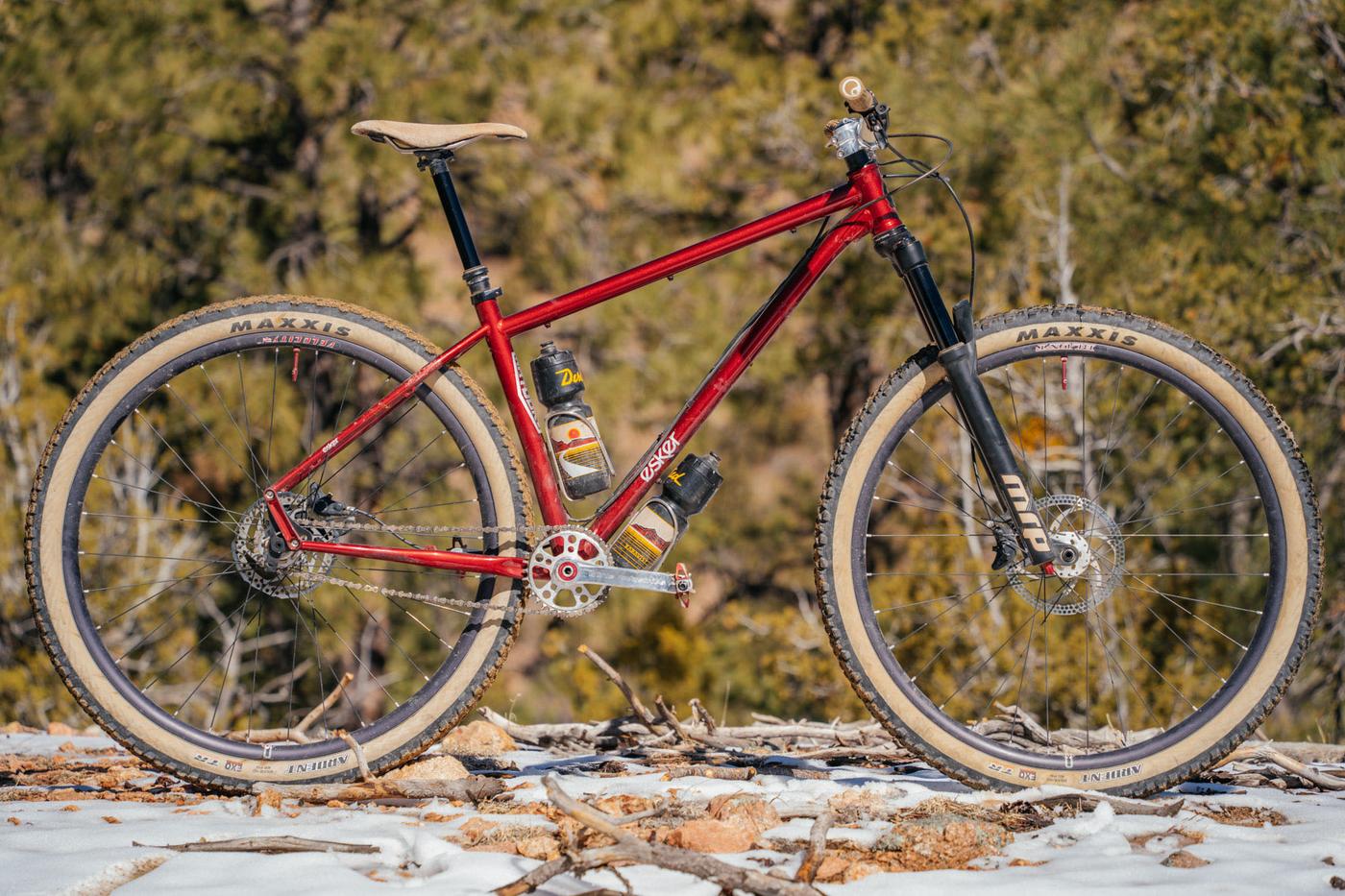 “But I thought the Hayduke was a 27.5+ rig frame?” Yes, it is. In fact, you can run a pretty stout 29er tire in it as well. Originally designed for a 140mm fork and a 27.5 x 3″ tire, the Hayduke is a perfect candidate for bikepacking and trail riding alike. Locke wanted something a little more zippy with his build though, so he got a 130mm fork with a 29er a-t-c and he opted for XC tires – Maxxis Ardent 29 x 2.4″ – and a singlespeed drivetrain, geared 32/18. 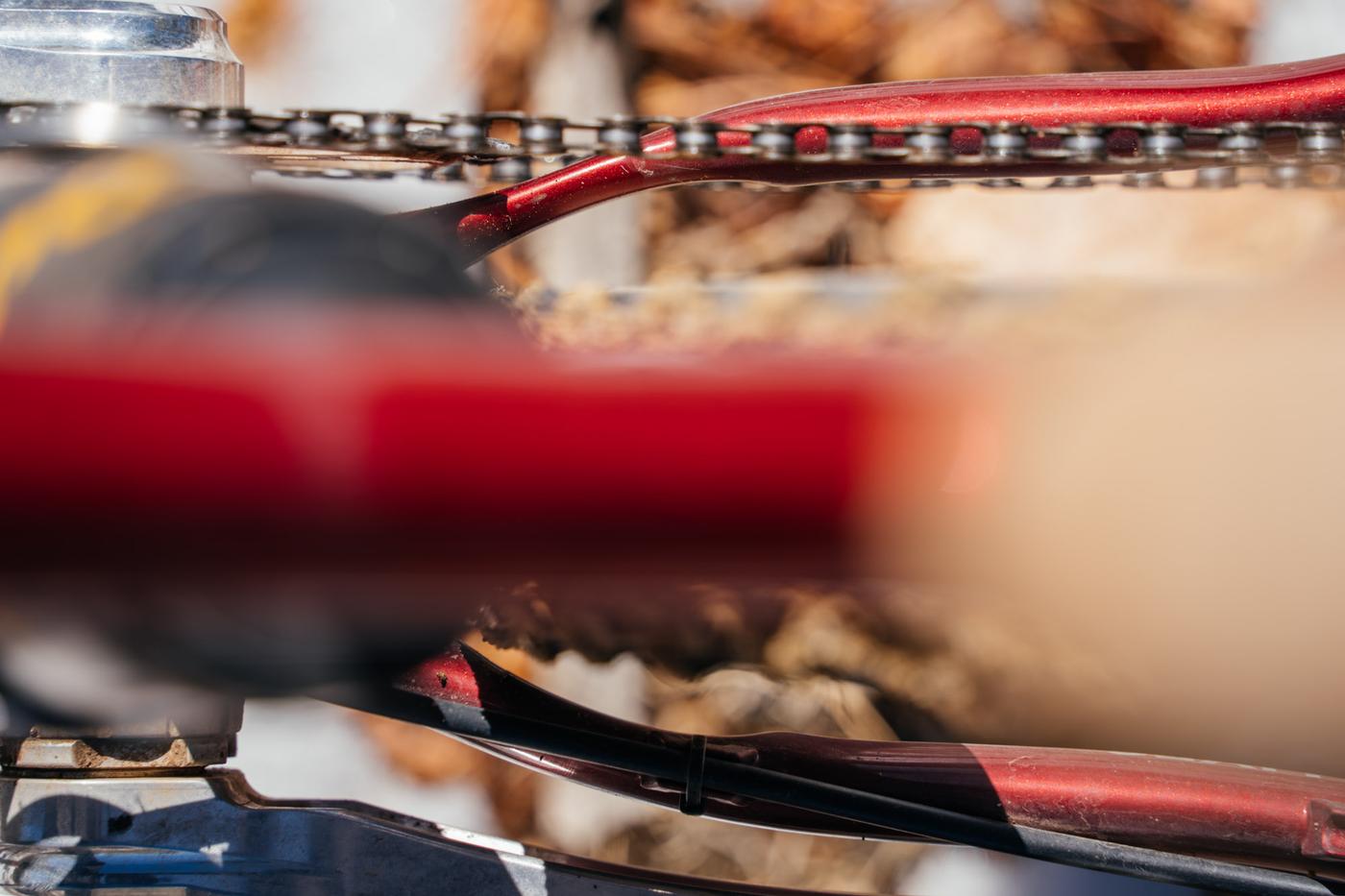 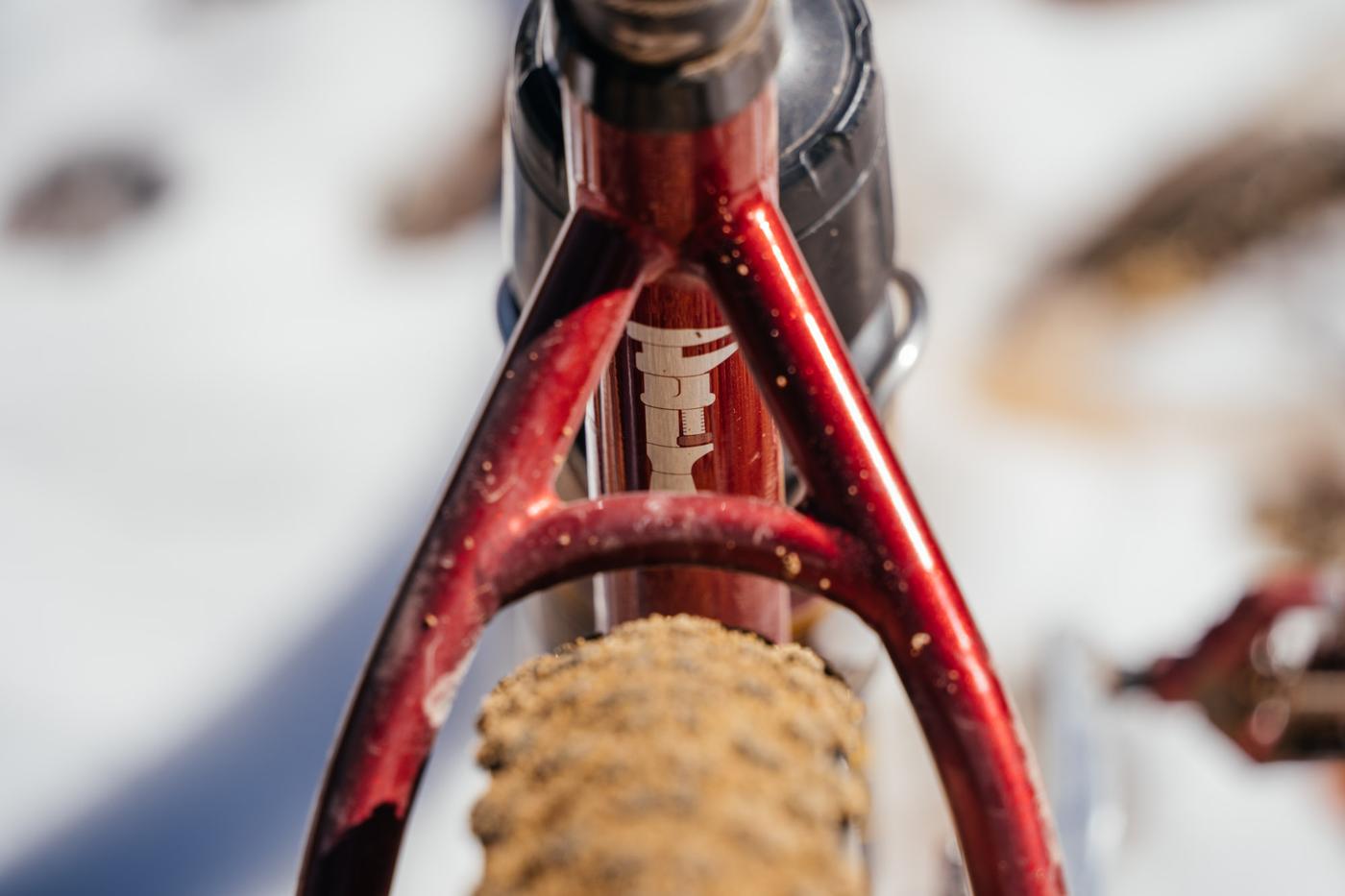 As you can see from the photos, there’s plenty of clearance for what I would guess to be a 2.5″ at least. 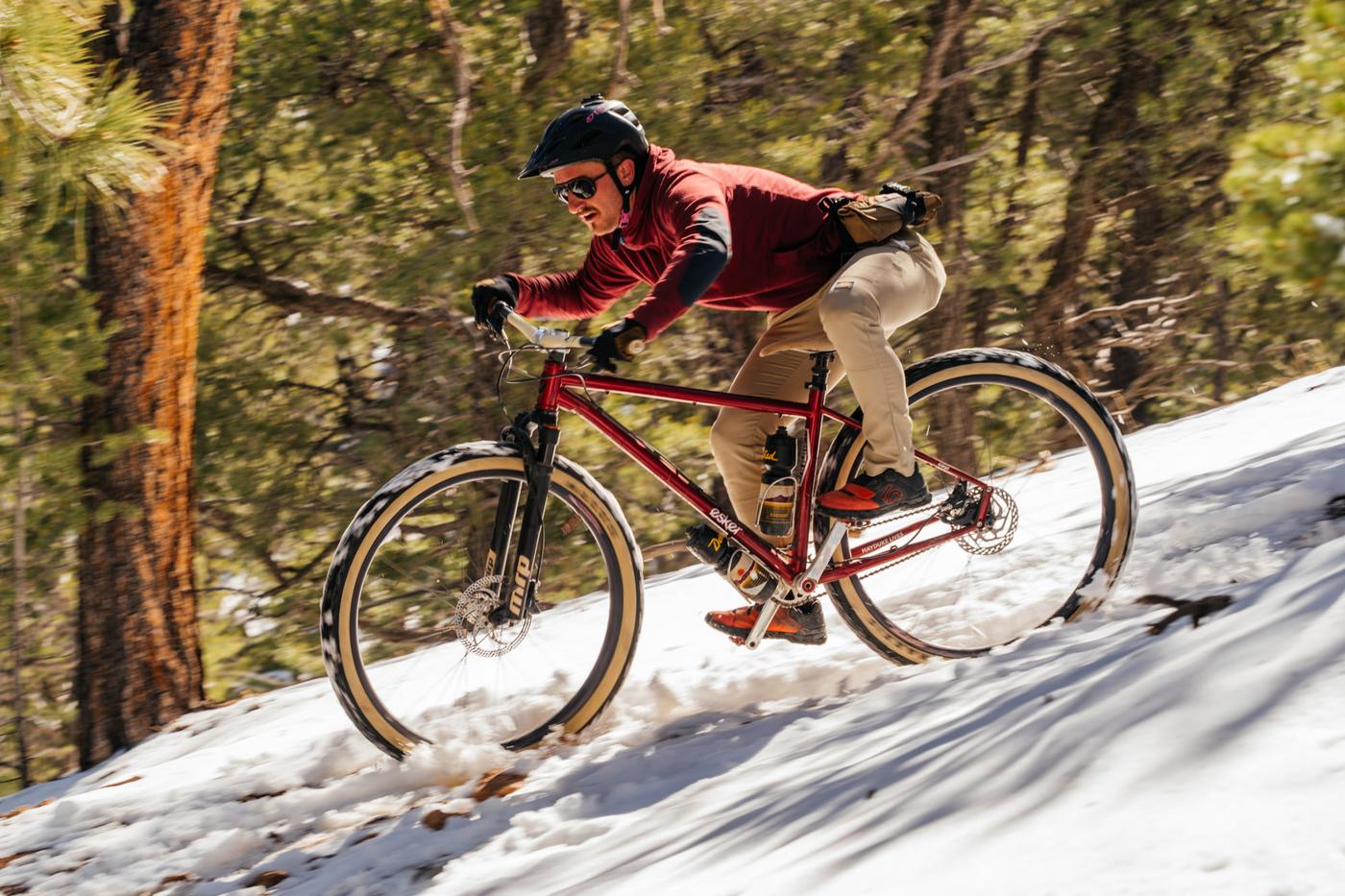 Why Not Build a Japhy?

Well, I’m working on a Japhy review at the moment after riding the bike for a few months and I agree with Locke’s logic. If you’re going to have one hardtail, make it a mid-travel bike. While the Japhy’s 120mm front fork is great, it’s nice to have a bit more insurance when riding rocky, steep terrain. The Hayduke’s geometry fits Locke’s preferred terrain and having a 130mm fork is just a smidge of added insurance for when you take a sketch line. 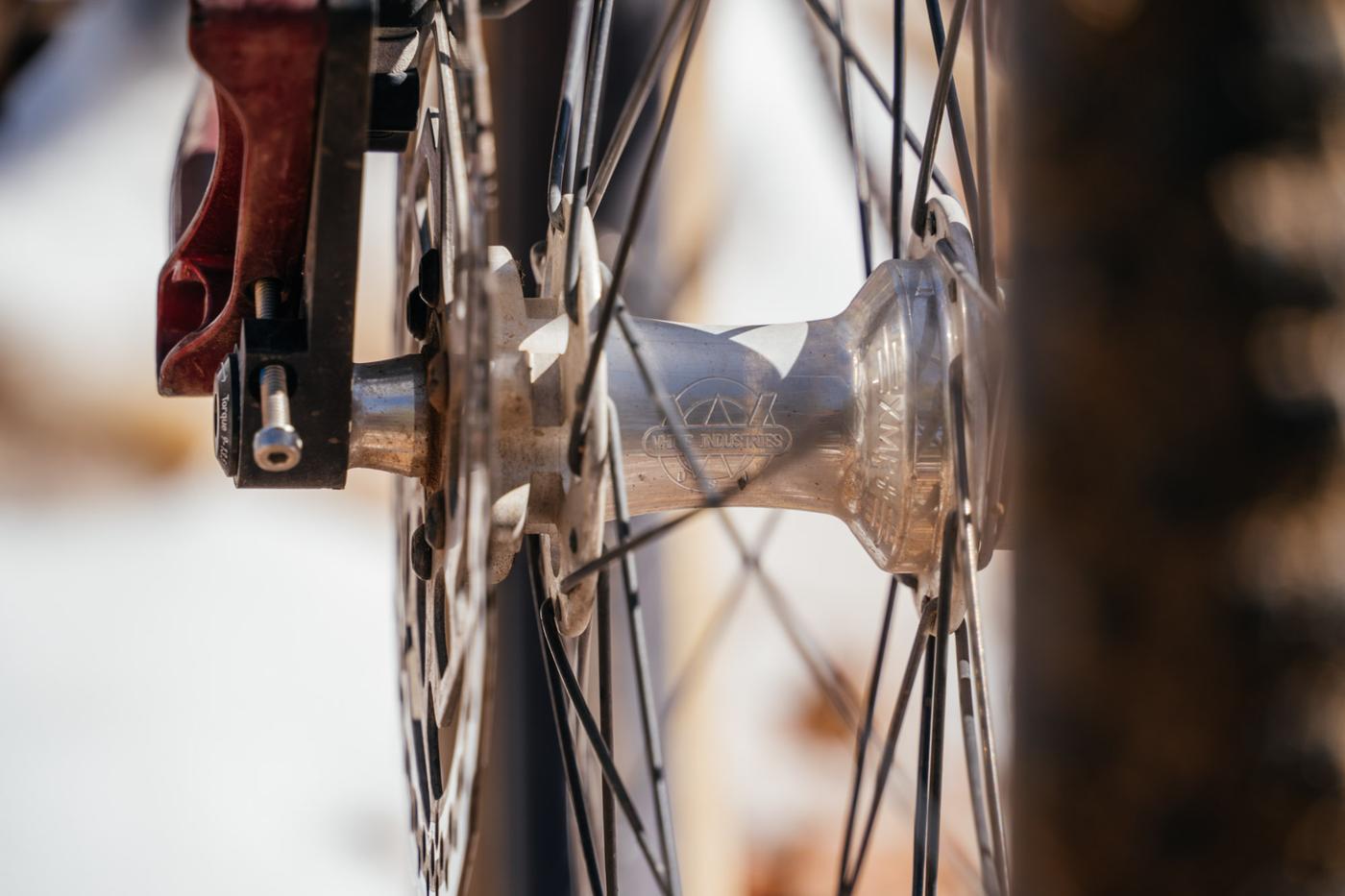 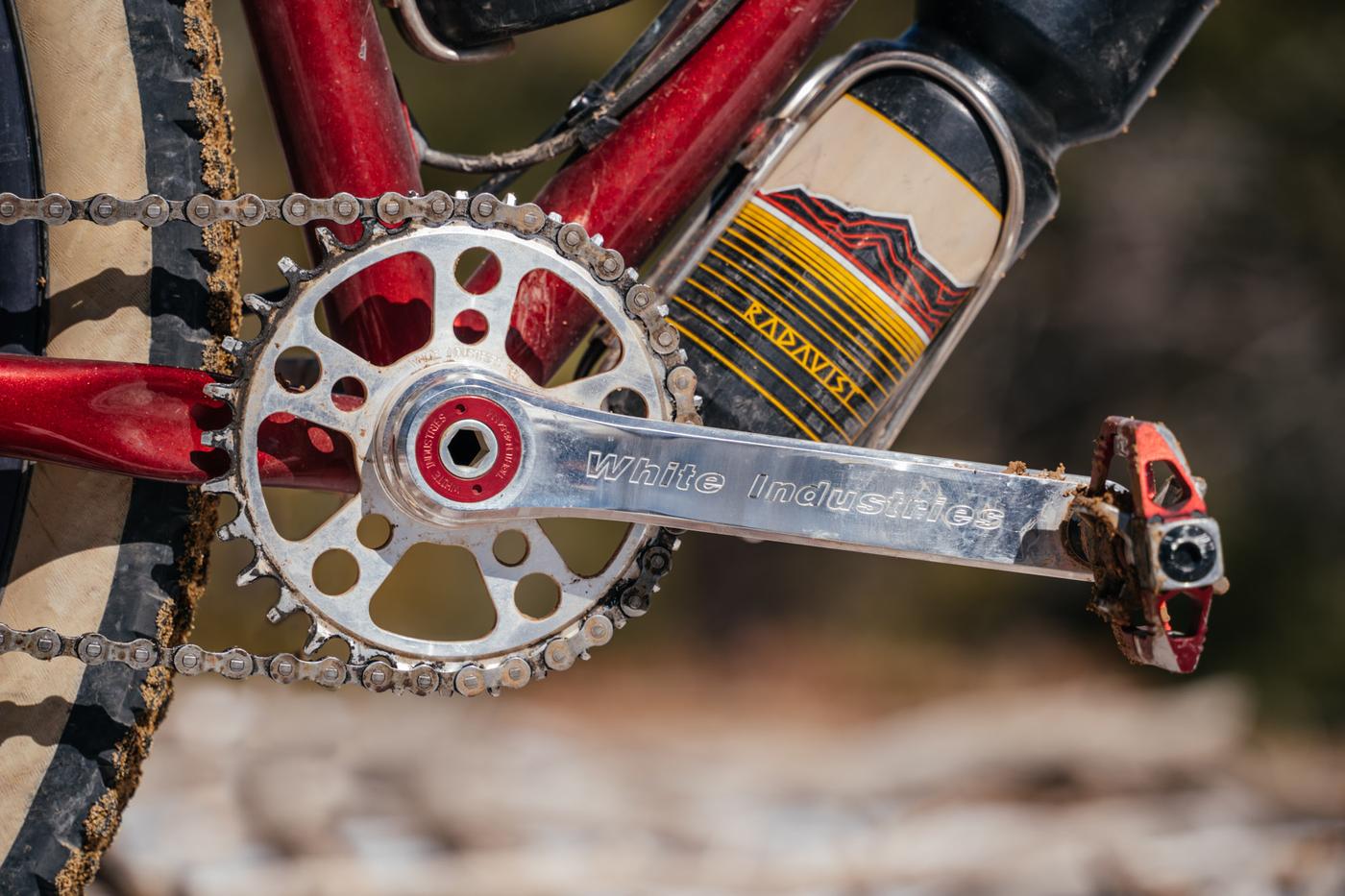 Singlespeeds are my favorite mountain bike to document. Maybe it’s their simplicity, the clean lines, and how balanced they look when perched up atop a mountain. Locke’s is no different and his build kit put the bling in the right places. For a drivetrain, he chose White Industries cranks, a Wolf Tooth cog, and White hubs, laced to Velocity Blunt SS rims. The MRP fork has been serving him well, and the polished Paul stem with Dropper Remote ties it all together. The hits of tan with his painted bars, Ergon grips, and a beat-to-shit saddle, custom re-upholstered by his friend. We only had time for a quick run up Atalaya, one of my favorite rides in town, but it was a typical Santa Fe winter day: blue skies and sunny.

I know some of you have Haydukes, so let’s see the builds! Post them up in the comments…